THIS LAST YEAR WAS our second collective year in a row of stress, health scares, stay-at-home orders, and general ennui that left most of us spending many of our days in sweatpants. Spending most of your time at home can make it feel like the entire world is limited to what’s inside the four walls of your house. So maybe you should try out stargazing in 2022.

Watching the night sky, even just for a few minutes, is a great way to give your brain a break from the stress and routine of your normal day; it’s a bit like mediation in that way. Stargazing can also remind us of just how tiny we are in the great cosmic universe, and be a nice way to remember we’re connected to people around us. It’s amazing to think that someone 3,000 miles away may be watching the exact same shooting star as you.

Every year brings thousands of night sky events, but some are bigger, brighter, and easier to see than others. Below, we round up the best 2022 night sky events you won’t want to miss, so we suggest putting these dates on your calendar. Factors like weather, cloud cover, and moon phase may impact just how well you can see some of 2022’s night sky events, but if you attempt to catch a few, there’s a good chance at least one will be a stellar astronomical performance. 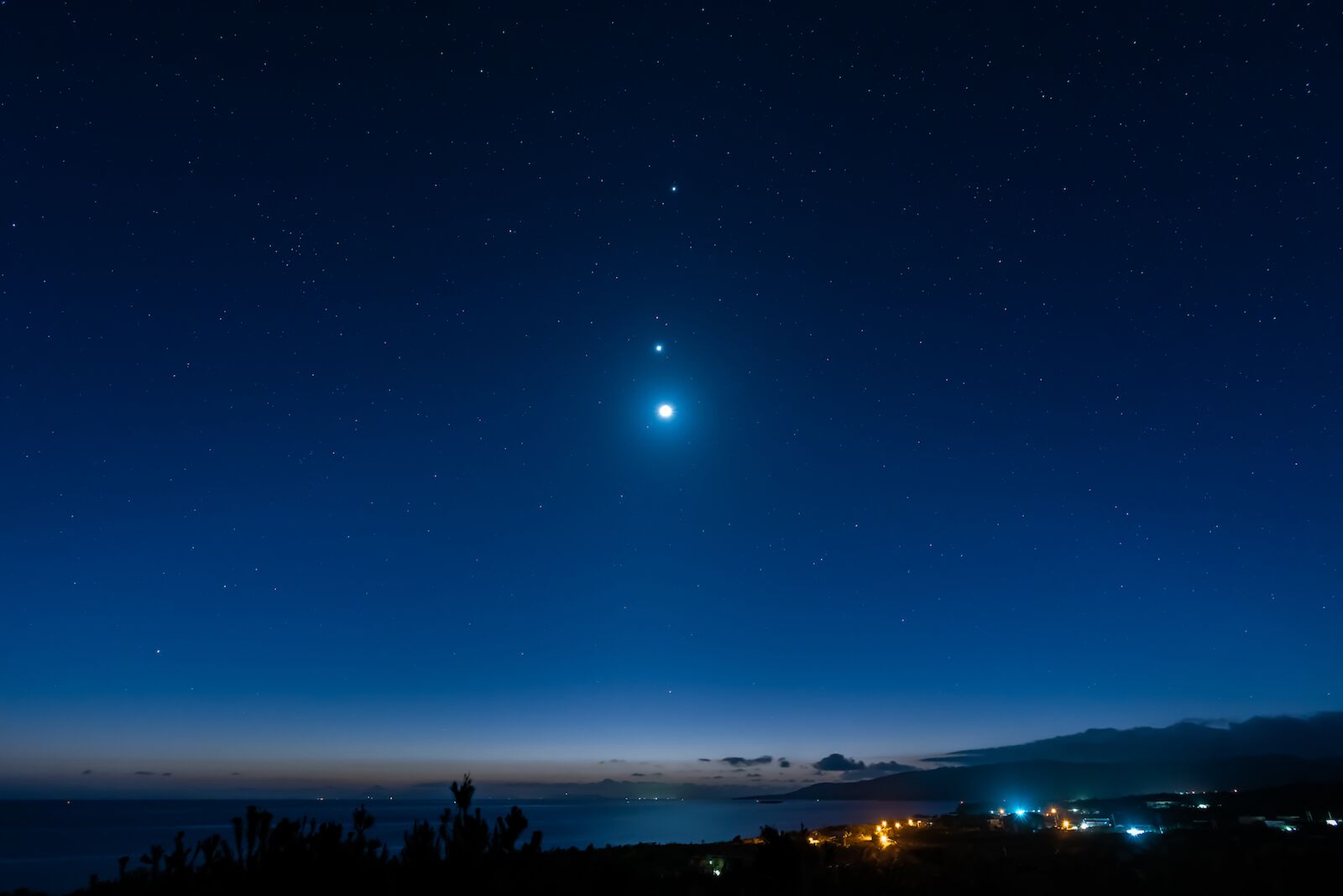 It’s only fitting that the planet Venus would peak on the days surrounding Valentine’s Day — after all, Venus was the Roman goddess of love, beauty, and desire. So consider waking up early with your beau to spot Venus at its brightest point all year. You’ll want to look for it just before dawn as Venus rotates near the sun. It’ll be close to the horizon and rise in the east. You’ll be able to see the light of Venus shining exceptionally bright without any devices, but you’ll be able to see the planet’s details with a good telescope. Venus will be bright for several weeks before and after that date, so don’t worry if you forget to set your alarm for that specific day. 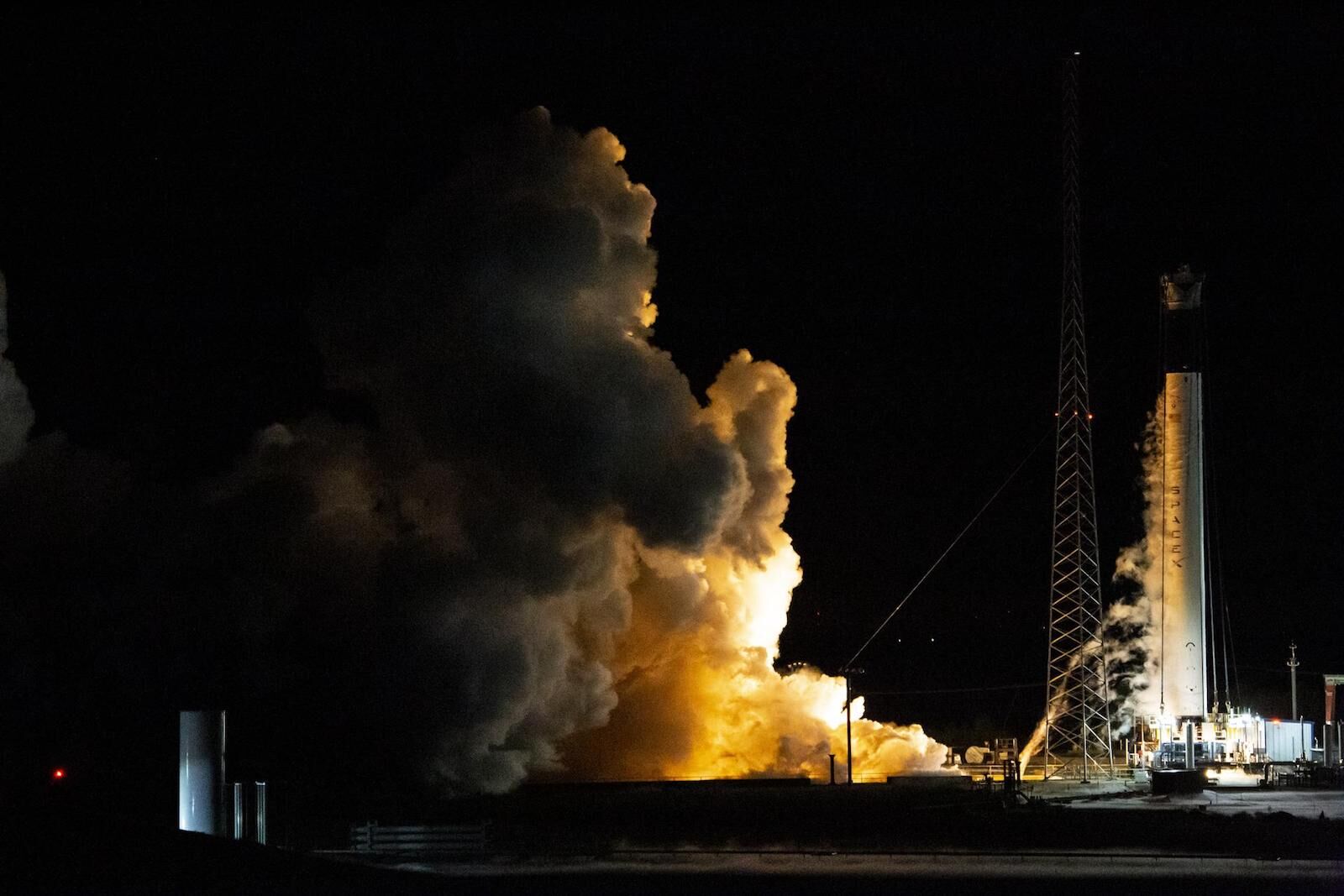 Okay, so it’s not technically a night sky event. But the launch of the SpaceX Starship — one of at least 36 launches planned by the company in 2022 — will certainly be a noteworthy event. Due to be launched sometime in March, it’s the largest space launch vehicle ever made. It consists of two parts: a booster to launch the vehicle, and the actual rocket that’ll travel in space. The booster, in theory, will fall into the ocean about three minutes after launch while the actual rocket loops around the planet. It’s the next step in testing ships that Tesla founder Elon Musk hopes will eventually carry humans to Mars. 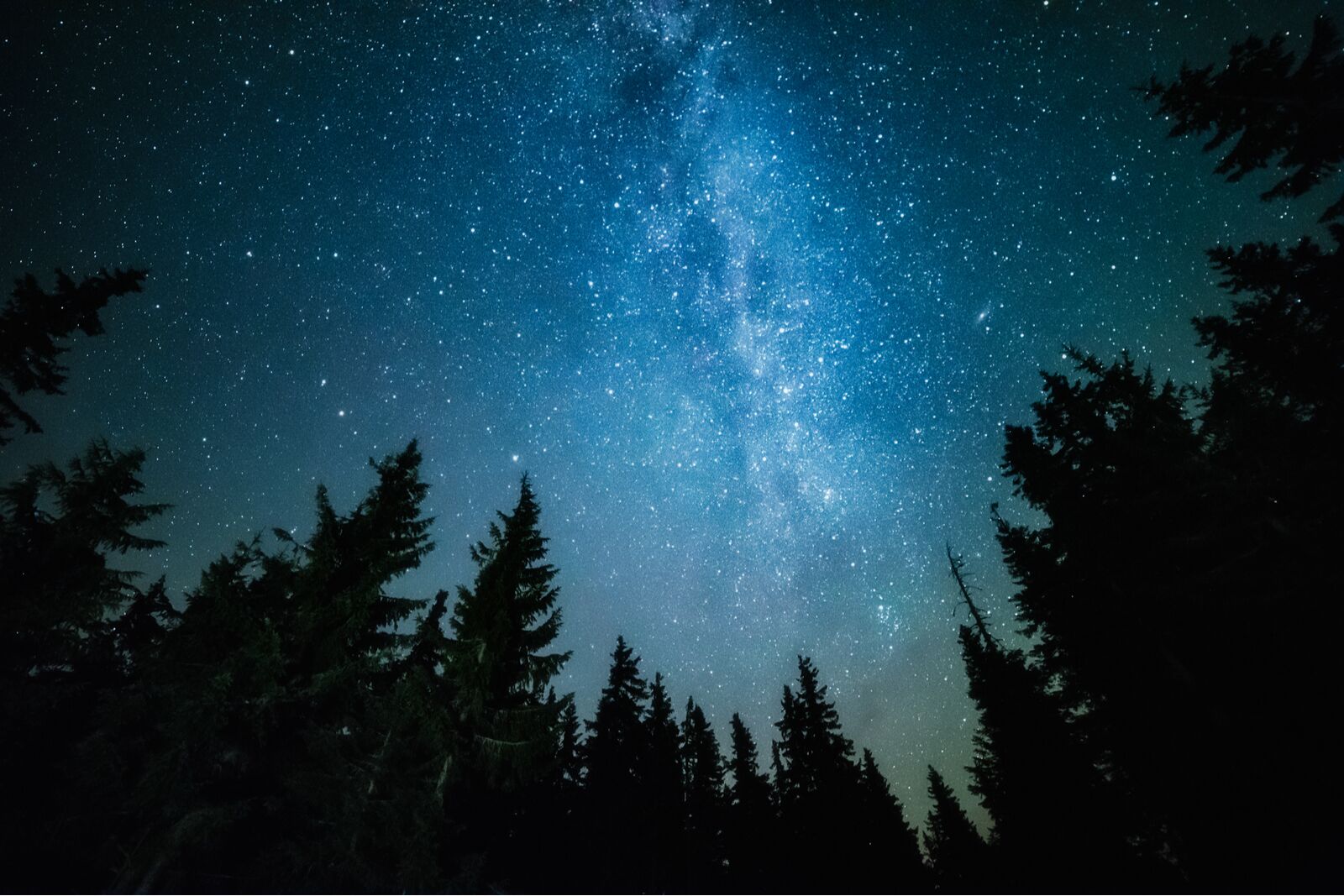 Don’t bother with any specialty stargazing equipment to see the black moon: it’s one of the few 2022 night sky events you won’t be able to see. At all. During a black moon, the sun illuminates the side of the moon facing away from Earth, making it look like there’s no moon in the sky. That makes it the darkest sky of the year and potentially the best night for stargazing in 2022.  It’s on a Saturday, making it an ideal weekend to plan a spring camping trip to a dark sky park. If you don’t feel like camping, check your local observatory or state parks to see if they’re hosting any public night sky viewing events that weekend. 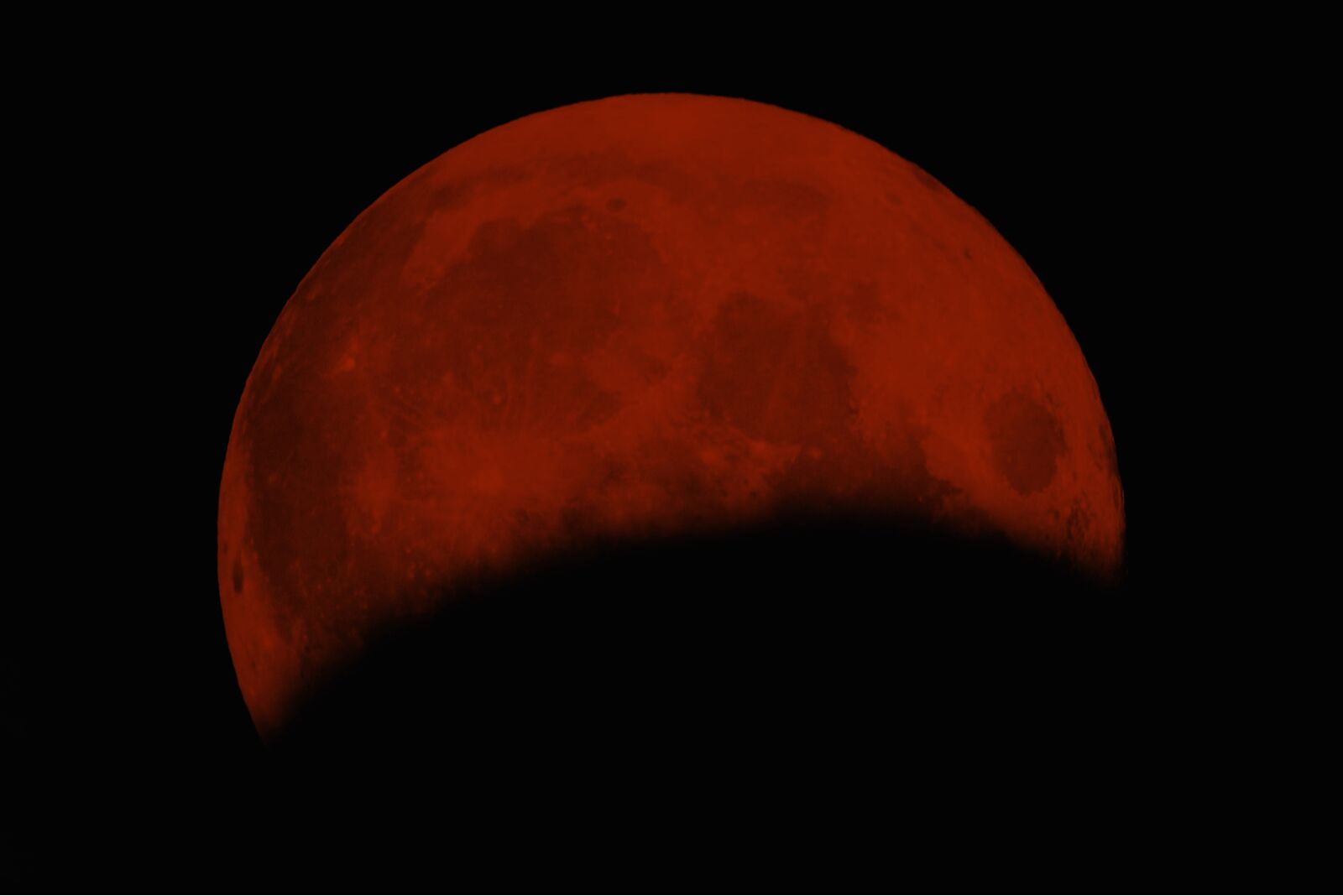 One of the coolest 2022 night sky events will be a total lunar eclipse mid-May, coinciding with a “blood moon.” Earth will be directly between the sun and the moon, which casts Earth’s shadow onto the moon. The moon will be fully shadowed, giving it an eerie reddish hue.

The best lunar eclipse viewing will be on May 16, about 10 minutes after midnight EST. Unfortunately, that means folks on the West Coast won’t have quite as good of a view. Skywatchers in the American Midwest and East Coast, anywhere in South America, or in Western Africa should be able to watch the entire show. If you’re in Western Europe or the western half of the US, you’ll be able to see part of the eclipse. The exception is viewing from the Pacific Northwest or western Canada, where watchers will only catch a small section of the show. There’s no trick to watching the eclipse — as long as you have a view of the moon, you’ll be able to see it. 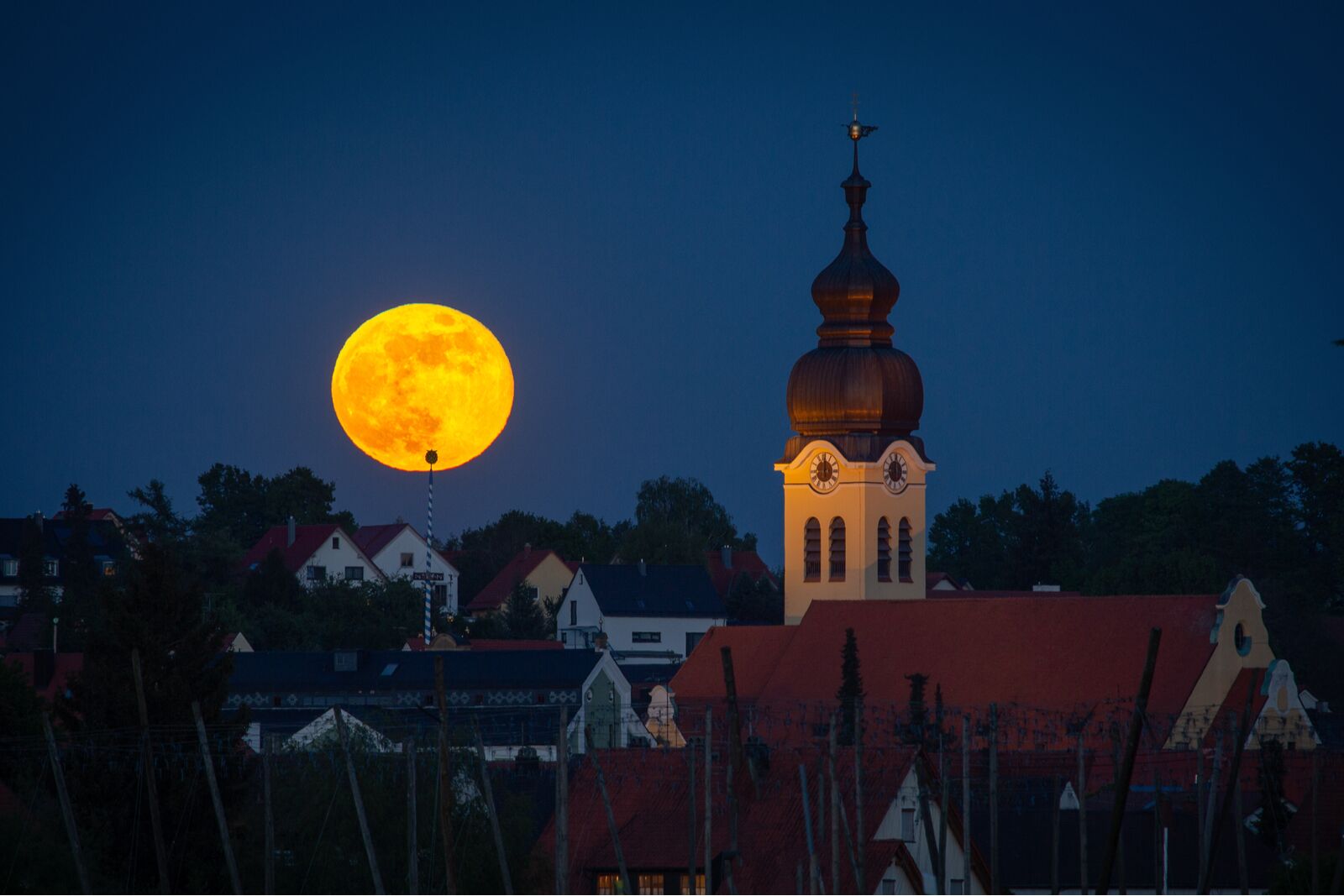 If you’ve ever looked up on a camping trip and thought, “wow, the moon looks bigger than usual,” you may have been looking at a supermoon. And the biggest supermoon of the year will be in June. This 2022 night sky event won’t be very hard to see, provided clouds don’t block the moon. During a supermoon (scientific term: perigean moon), the moon isn’t just brighter — it’s actually in its closest orbital point to Earth, so it really does look larger than normal. Perigean moons can create stronger tides, so take that into account if you’re planning to do some moongazing from the beach. By the way, the “strawberry” part of the name comes from US Native American tribes for whom the summer supermoon signaled the beginning of the strawberry harvest. 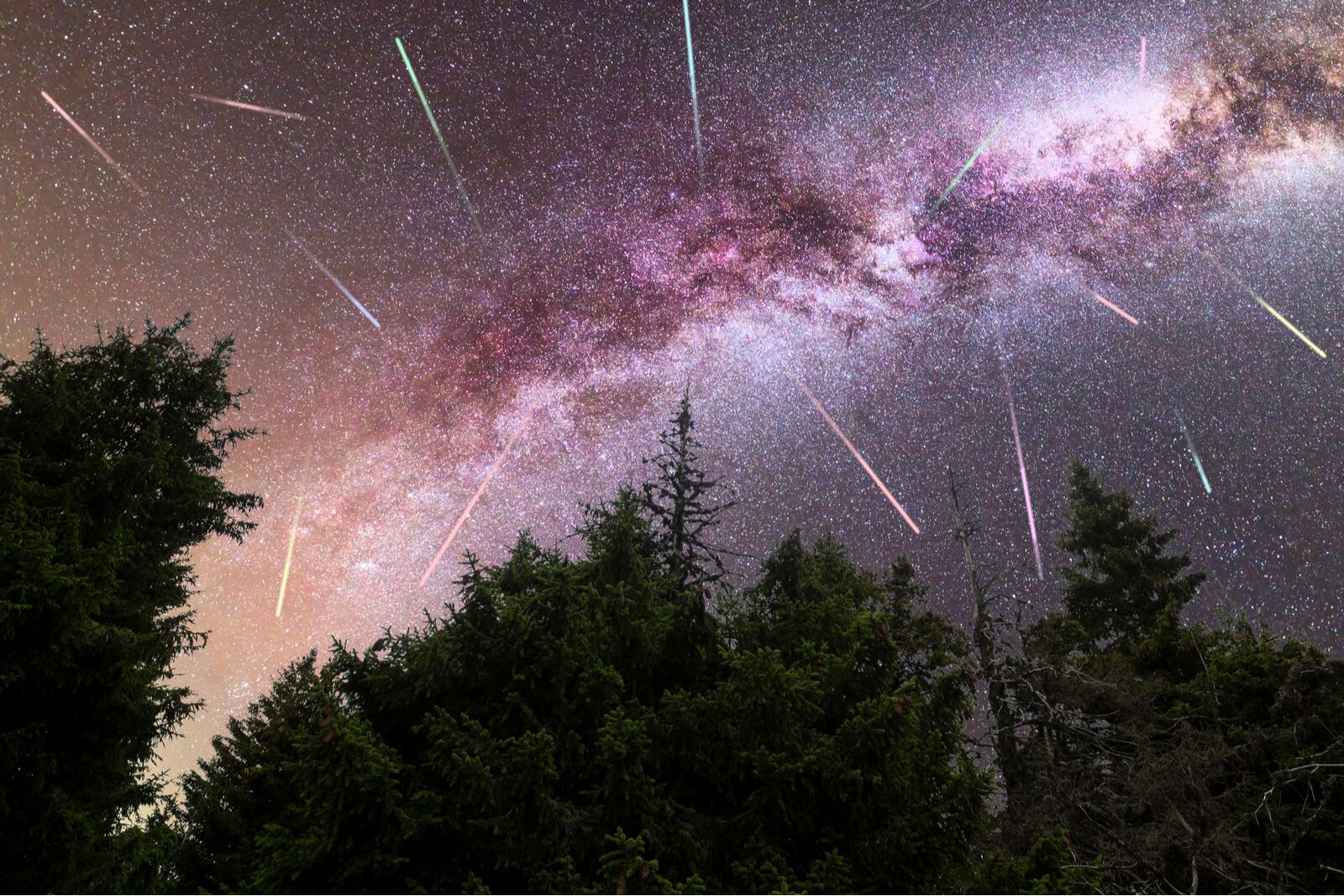 The Perseid is always one of the largest showers of the year and is certainly one of the flashiest, with skywatchers on the western coast of the US potentially able to see more than 120 meteors per hour. The shower is debris from the mammoth Swift-Tuttle comet. It might also be the most pleasant meteor shower of the year, given that it falls on balmy summer nights, perfect for stargazing. You’ll be able to see the Perseid Shower from anywhere in North America, but unfortunately, the moon will be mostly full during the shower in 2022. That makes the sky brighter and meteors harder to see. Make plans to camp near a dark sky park that weekend to maximize your chances. You could also take a trip to a national park; popular options such as Joshua Tree, Canyonlands, and Big Bend usually host Perseid-watching events for park guests.

September 26: Spot Jupiter and its moons

Jupiter is just one planet removed from Earth (Mars is our closest neighbor), but it’s still usually no more than a speck in the sky. But at roughly 520 million miles away from Earth, that’s understandable. However, toward the end of September, Jupiter will be at its closest point to the Earth — a mere 365 million miles away. That should make it much easier to see as it’ll be nearly twice as big in the sky, size-wise. Without stargazing equipment, it’ll look like an exceptionally bright, oversized star, but if you do have a telescope or pair of binoculars, you should be able to see Jupiter’s moons. Jupiter has a whopping 79 moons, but at roughly half the size of our planet, Ganymede is the largest and easier to see. The best time to spot Jupiter will be just after midnight on the 26, but it’ll be brighter than usual for a few weeks before and after that date. 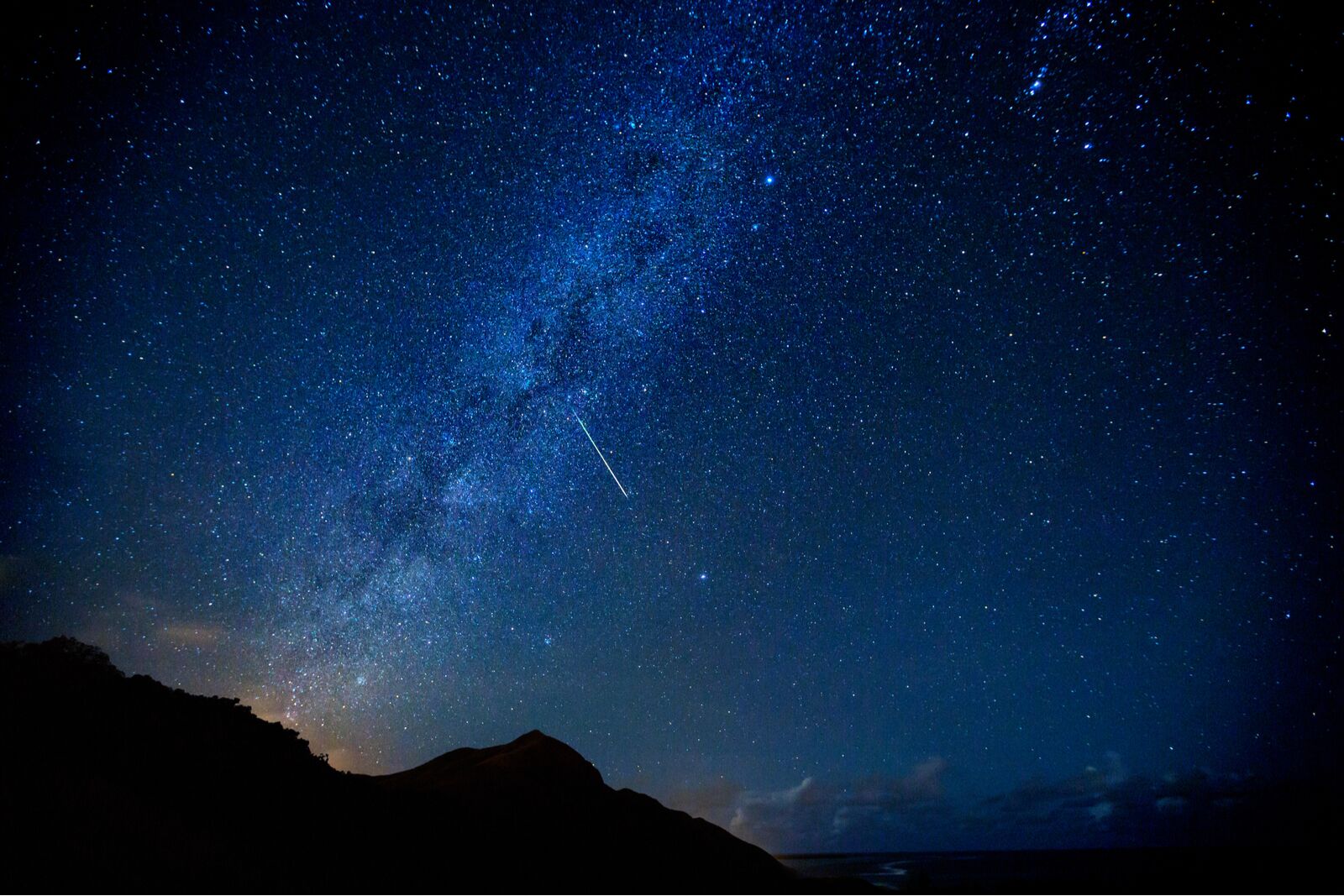 The Perseid has the potential to see the most meteors per hour, but the guess of how many will be visible is based on having a dark, moonless sky — which won’t be the case with 2022’s Perseids. So even though you’ll have to bundle up a bit more, the November Leonid night sky event will likely be much more impressive for most watchers. In mid-November, the moon will be in a waning crescent phase, so it won’t be giving out much light. That should make it easier to see the meteors, though you’ll still likely want to be at a dark sky park. If you’re lucky enough to live somewhere with dark skies, you’ll still need to give your eyes about 15-20 minutes to adjust to the darkness before you start seeing the shooting stars. You’ll usually see about 15 per hour. 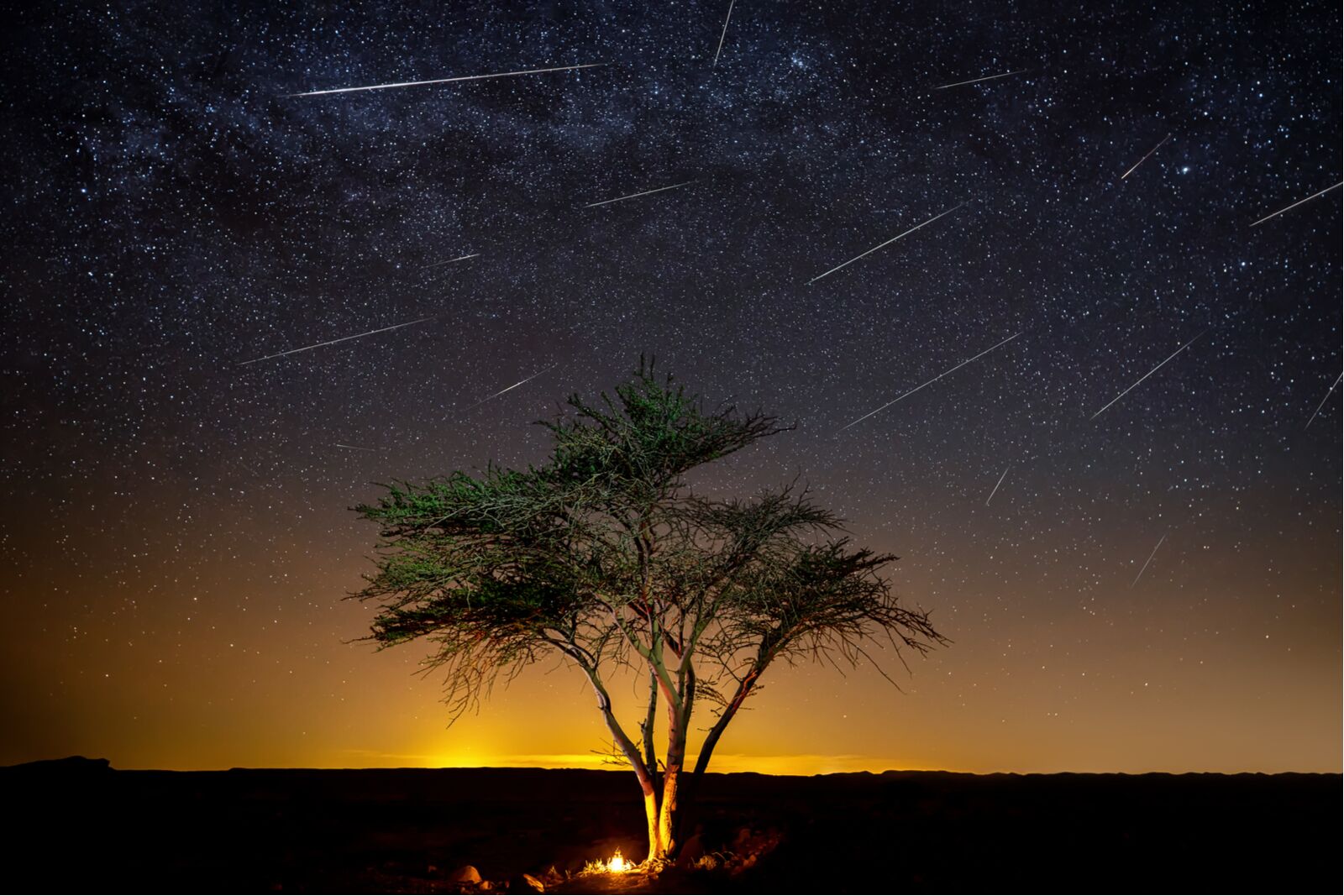 If you tried to watch 2021’s Geminids shower and were disappointed by how bright the sky was, 2022 will be your year. The shower will reach peak frequency on December 14, when the Earth’s rotation carries us through a debris field left by the asteroid 3200 Phaethon (that makes it one of the few meteor showers not generated by a comet). And fortunately, it’ll be a waning moon, so it’ll be about half as bright as the moon during the 2021 shower. If the sky is completely dark, you can see about 50 to 60 meteors per hour — so even with some moonlight, you should be able to see more than a few. The Geminids is only available to viewers in North America, and the best time to see it usually around 2 a.m. 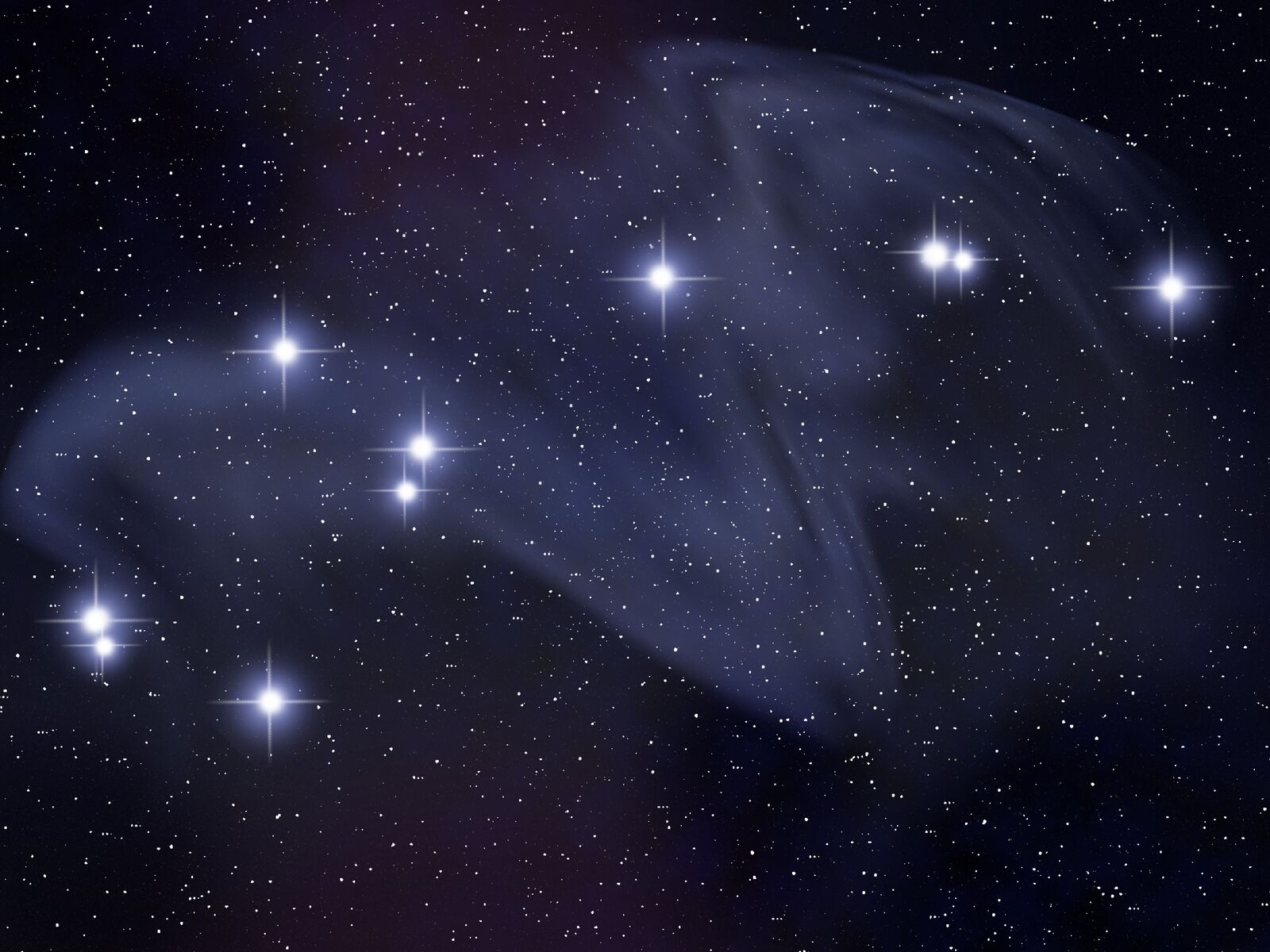 If the sky was too bright or too overcast to catch the Geminids, you might still be able to see shooting stars during the Ursid shower eight days later. The moon will be in its smallest and darkest phase, creating an excellent opportunity to watch the night sky even in areas with minor light pollution. You usually can’t see more than 10 or so meteors per hour, but with almost no moonlight, you may be able to catch every single one.

The shower is named for the constellation where the meteors appear to start — Ursa Minor, also known as the Little Dipper. If you’re in the Northern Hemisphere, look to the north to spot the Little Dipper. The further north you are, the longer the Little Dipper is visible in the sky. You may have to be patient if you’re hoping to see shooting stars, so brush up on your winter camping skills before heading out.

Before the time comes to go outside and stare at the sky, consider downloading a stargazing app like SkyTracker, Night Sky, or or SkyView. The apps use augmented reality, so you just point your phone camera at the sky and the apps will identify everything from constellations to satellites to planets. Having one handy is a great way to ensure you have a successful hour or two of stargazing, even if you don’t end up seeing too many meteors.

Epic Stays10 of the Most Luxurious Stargazing Resorts Around the World
Tagged
Astronomy Outdoor
What did you think of this story?
Meh
Good
Awesome