Sinking your teeth into a familiar dish from your past can instantly transport you to memories from your childhood. Each country has its own dishes that hold sentimental value for the people who grew up or lived there. For me, that country is Taiwan. I might be biased as someone who is ethnically Taiwanese, but Taiwan has some of the best cuisine in the world. Taiwan is well known for its delicious food — especially when it comes to its street vendors in the capital of Taipei where street food is an integral part of the culture. Spend some time in Taiwan and you, too, will find that the memories of the food from your trip stay with you.

These 23 dishes don’t all originate from Taiwan but are all are commonly found and an important part of Taiwan’s food scene.

Scallion pancakes sound simple, and they’re pretty much what the name suggests: flour-based flat pancakes with scallions that are cooked in oil. While there are recipe books that tout scallion pancakes as easy to make, from personal experience, I suggest you leave it to the professionals if you want a true Tawainese version. Luckily, purveyors can be found on street corners around Taiwan and are often served with a chili sauce or black vinegar.

The perfect scallion pancake is light and airy with a crispy bite, and the flavor ends with a rich and layered green onion infused saltiness.

This noodle soup is one of the most popular soups in Taiwan. The main ingredients are oysters and wheat flour vermicelli noodles, as the name suggests. I’d always anticipate the days when my uncle would burst into the room with bags of noodle soup during my summers in Taiwan. In those days, in 1997, a bowl of soup cost just 20 cents, though these days oyster vermicelli can go for a very reasonable $2. Oftentimes, vendors will have a steaming pot behind the counter. To order, simply point to the pot that’s filled with small, briny oysters and noodles with the perfect springy texture. The texture is known as QQ in Taiwan, which doesn’t have an exact translation in English but generally means the bounce of a well-cooked chewy noodle. 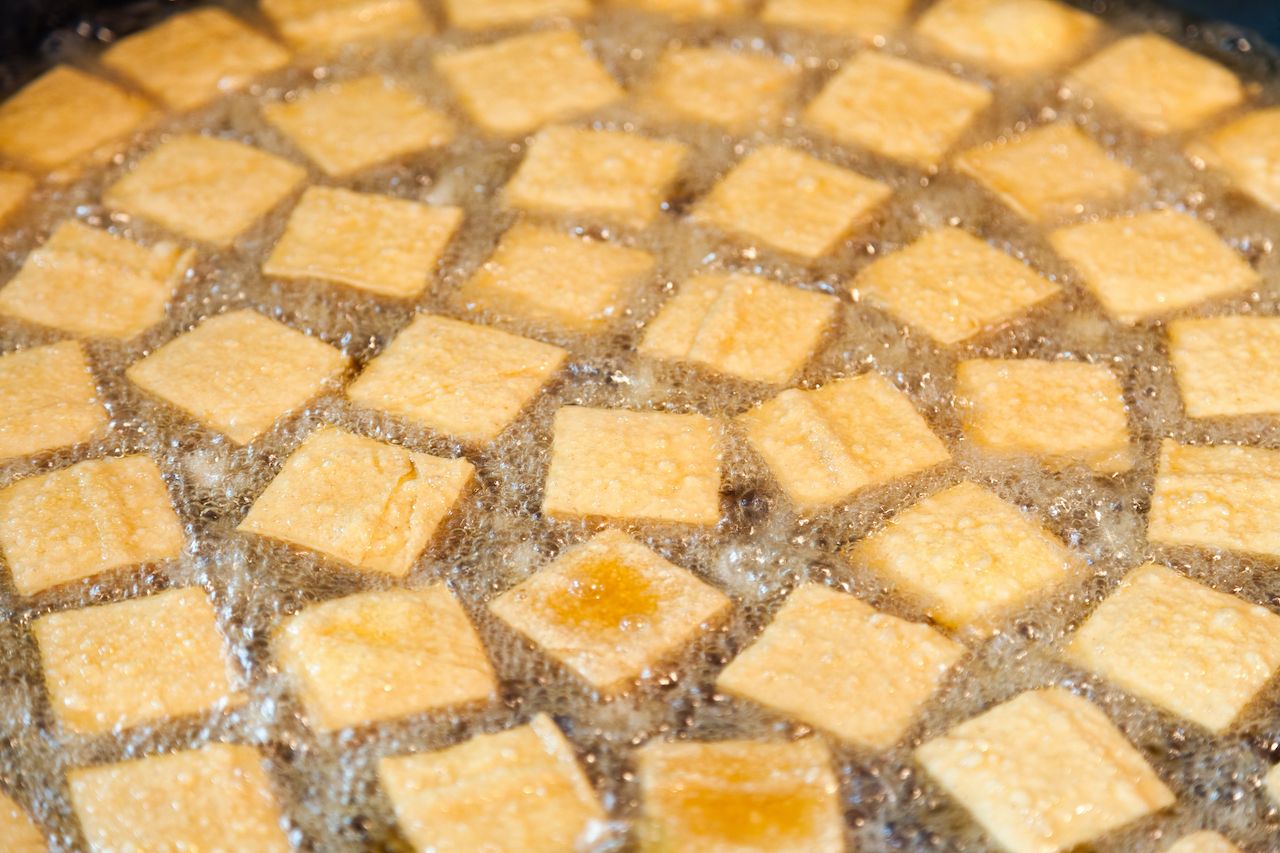 Chòudòufu is a fermented tofu (often called stinky tofu) that varies by region and vendor. In general, it’s made by brining fresh tofu and then frying it. This type of tofu is also eaten cold, steamed, and stewed, but fried is the most common. When fried, it has a crunchy outside and a buttery center. It’s typically served alongside chili and soy sauce. The aroma and flavor can take some getting used to for people who are trying it for the first time, but such is the case for other fermented foods around the world. One of the best places to try this delicacy is at the Shilin Night Market in Taipei.

While bubble tea is now known around the world and is sold in trendy cafes across the United States, it originated in Taiwan in the 1980s. At its most basic, it’s made with tea, milk, sugar, and chewy balls of tapioca. Green tea was the most popular flavor when the drink first premiered, but now you can get it in hundreds of different flavors. The boba in Taiwan is delicately sweet and meltingly soft with the perfect amount of QQ.

Biandang are to-go boxes of food (bento boxes) that were first sold by the Taiwan Railways Administration for commuters on trains. These train station biandang typically consisted of a fried pork chop, seasonal side dishes and veggies, a soy sauce egg, and tofu. Nowadays, these lunch boxes can include any combination of meats and veggies. It’s a comforting and filling lunch option for office workers and students in Taiwan. 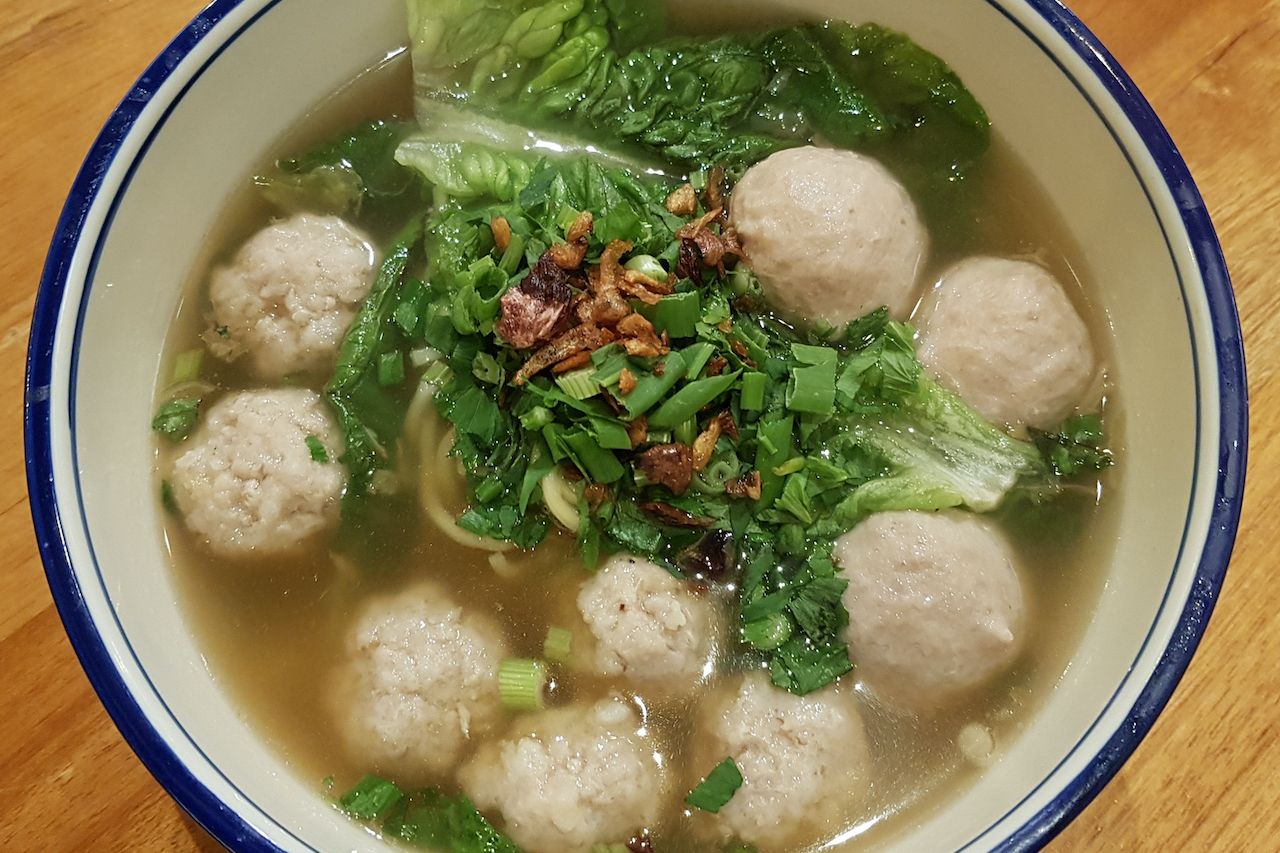 Gong wan tang is a soup made with pork meatballs that have cuttlefish added, which adds a chewy bounce to the texture. The soup has a clear, deeply flavorful bone broth with cilantro and onions. It’s a popular and soothing Taiwanese snack that’s somewhat like chicken noodle soup in the US, except that it’s commonly served from street food stalls. The dish is found all over Taiwan, but it’s especially well known in Hsinchu, which has a gong wan tan festival.

Popular at night markets, rice-stuffed chicken wings are exactly what they sound like: de-boned chicken wings that are stuffed with rice. The wings themselves are then marinated and fried or charcoal grilled. The fragrant sesame oil sauce makes for a juicy bite of fried chicken and rice all in one.

Sanbeiji is popular all over China and Taiwan, although the Taiwanese have a much sweeter spin on the original Chinese recipe that comes from Jiangxi Province in southern China. Taiwanese Sanbeiji features equal parts soy sauce, sugar, and sesame oil as compared to the Chinese version with equal parts soy sauce, rice wine, and oil. This braised dish is cooked and served in an earthenware pot alongside rice. The chicken comes to the table sizzling and popping with a lightly crisped skin. 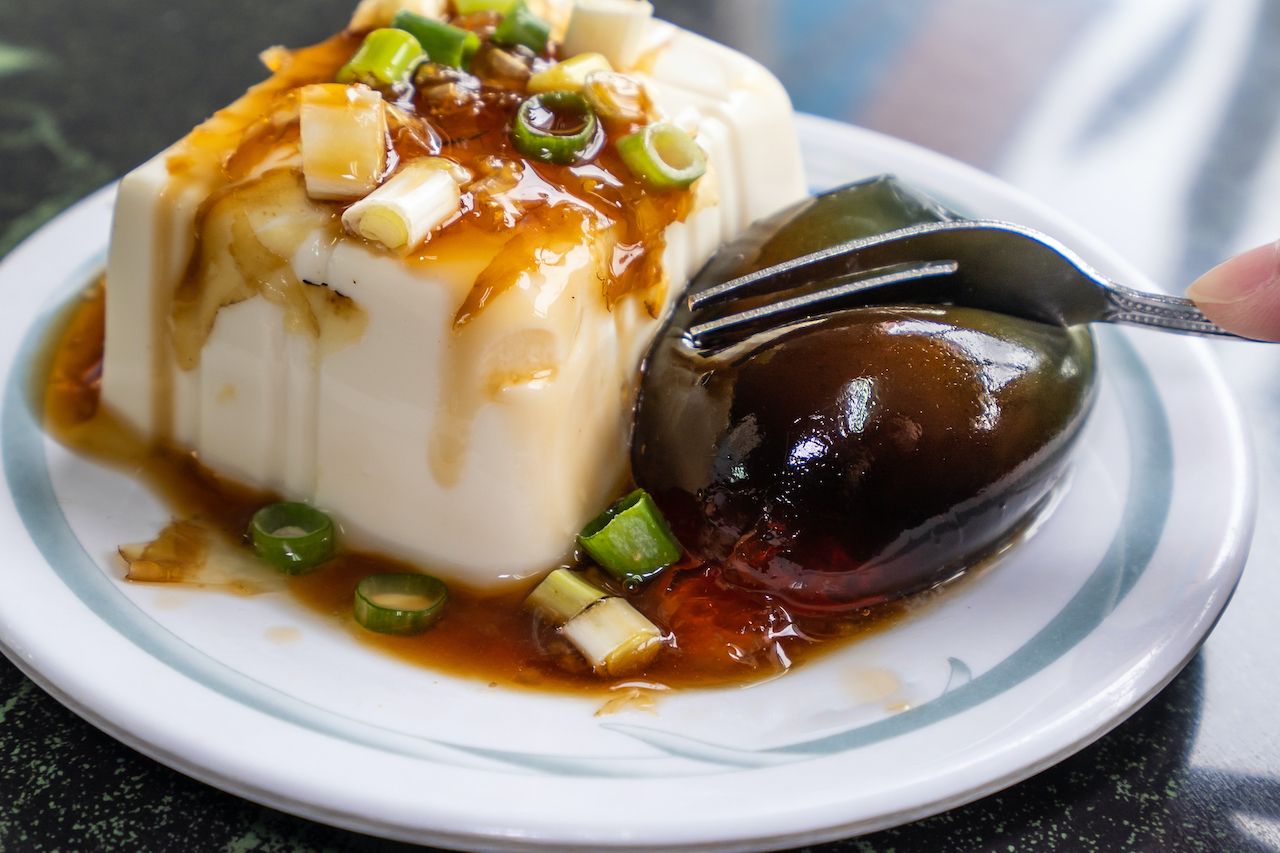 I laugh every time I see pidan, also known as century or thousand-year-old eggs, presented as disgusting eating challenges on Western TV shows. The Taiwanese consider the pidan a timeless delicacy. It’s admittedly an acquired taste, however. To make it, the preserved duck, chicken, or quail eggs are preserved for months in a clay, salt, and acid mixture, which turns the egg a grey color. It tastes similar to a hardboiled egg, but it has a jelly casing, and the yolk has a faint sweetness with a full-bodied flavor similar to a creamy cheese. It tastes great paired with rice and is often served in rice porridge for breakfast or at dim sum.

There’s much to be said about the dishes that make up traditional Taiwanese breakfast dishes, but youtiao has a special place among the many options. Youtiao translates to “oil stick” or “fritters” in Mandarin, and it’s also known as the Chinese doughnut or cruller. It’s one of the more famous types of doughnuts around the world and is often served alongside sweet or savory milk, rice porridge, or sandwiched between two pieces of toasted flatbread.

Xiao long bao are pork-and-soup-filled dumplings that are steamed in bamboo baskets. They originally come from the Jiangnan Province of China and especially Shanghai. Many say that the Taiwanese dumpling chain Ding Tai Fung has mastered the art of hand-making these delicate dumplings. With outposts all around the world, each restaurant features a brightly lit kitchen where customers can view dumpling masters furiously and artfully kneading the thin dough and stuffing the dumplings. It’s recommended that you bite a little hole in the dumpling and let the soup fill your spoon before putting it in your mouth. This helps keep you from getting burned by the flavorful, piping hot pork broth inside. 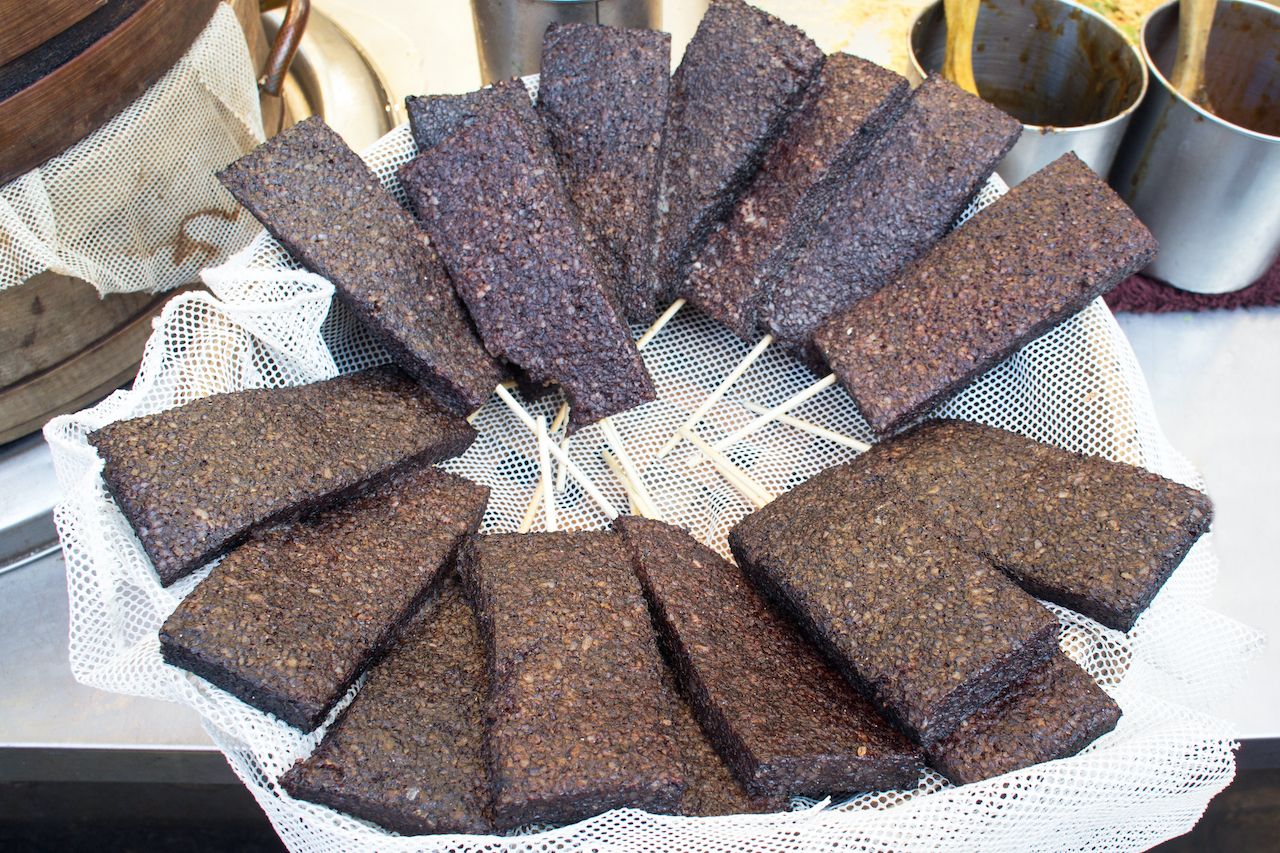 Taiwan has a serious street food culture, and new flavors and iterations pop up in markets constantly. One popular mainstay of Taiwan’s street food scene is zhū xiě gāo. The snack is made with sticky rice and pork blood that’s steamed and then coated in a sweet sauce and dusted with peanut powder. It’s served hot on a stick like a popsicle and tastes sweet, mochi-ike, and savory all at the same time.

Baobing is the best way to cool down on a hot day. Taiwanese shaved ice is made with super fine shavings of ice topped with whole fruit (strawberry and mango are popular), sweet syrup, and condensed milk. Red bean and mung bean are also popular depending on the season.

In the humid tropical summers of Taipei, cold noodle salad is a cooling escape. It’s incredibly simple: cold noodles, chopped cucumber, and carrots. The touch that pulls everything together is the tangy peanut and sesame dressing. It’s mixed up like what’s done with bibimbap and then topped off with generous amounts of chili oil to give it an extra kick. 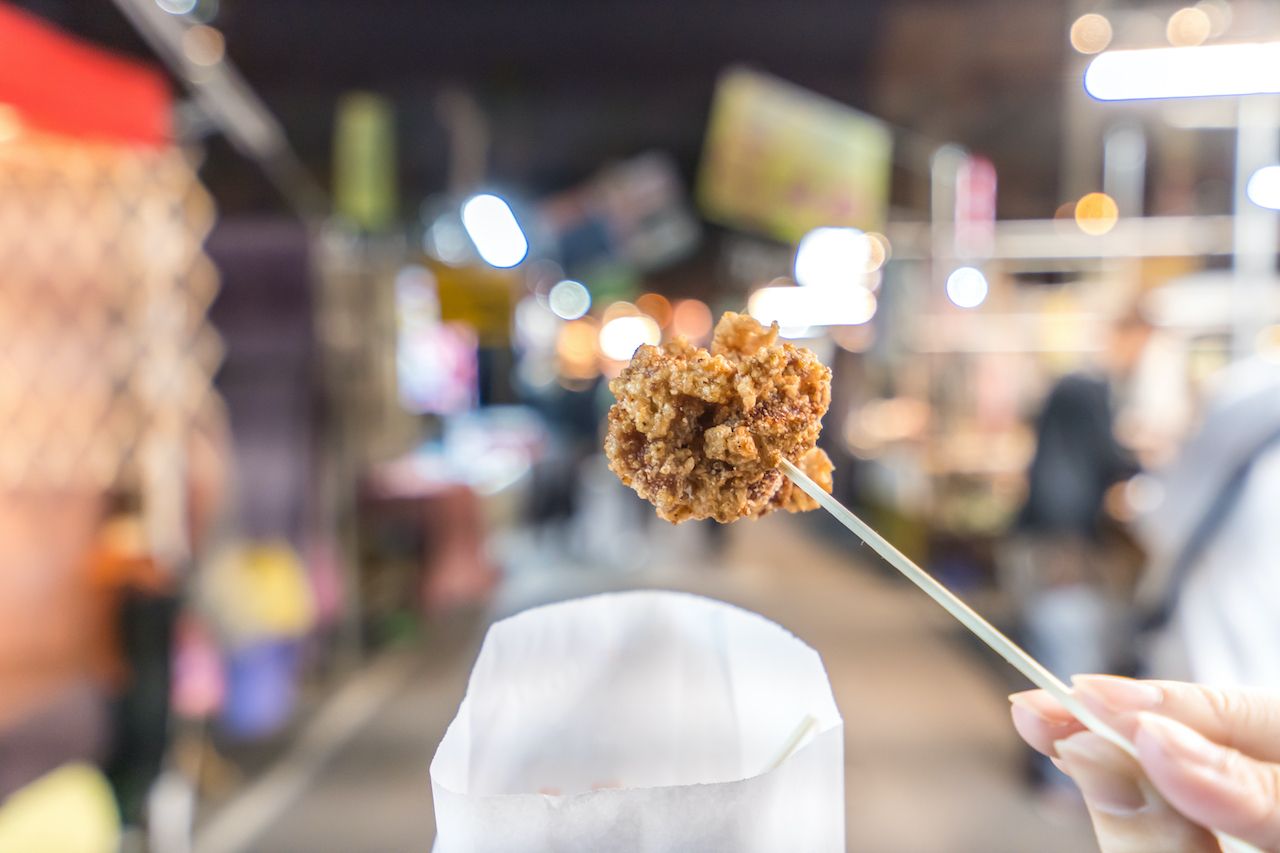 Tian bu la are fish cakes that are similar to oden in Japan, though much chewier with more QQ. It’s typically made with white fish that’s coated in a batter of potato or tapioca flour and spices before being fried. The shape is either like a tube or in a flat cake. The flavor is both sweet and savory at the same time.

Tiědàn are chicken or quail eggs that are cooked, dried, and then re-cooked in a soy sauce broth. The process shrinks the eggs and makes the outside a deep dark soy color. It also makes them flavorful (salty and sweet all in one) as well as chewy. They’re a great bar snack and are often sold at supermarkets or on the street in vacuum-sealed bags. 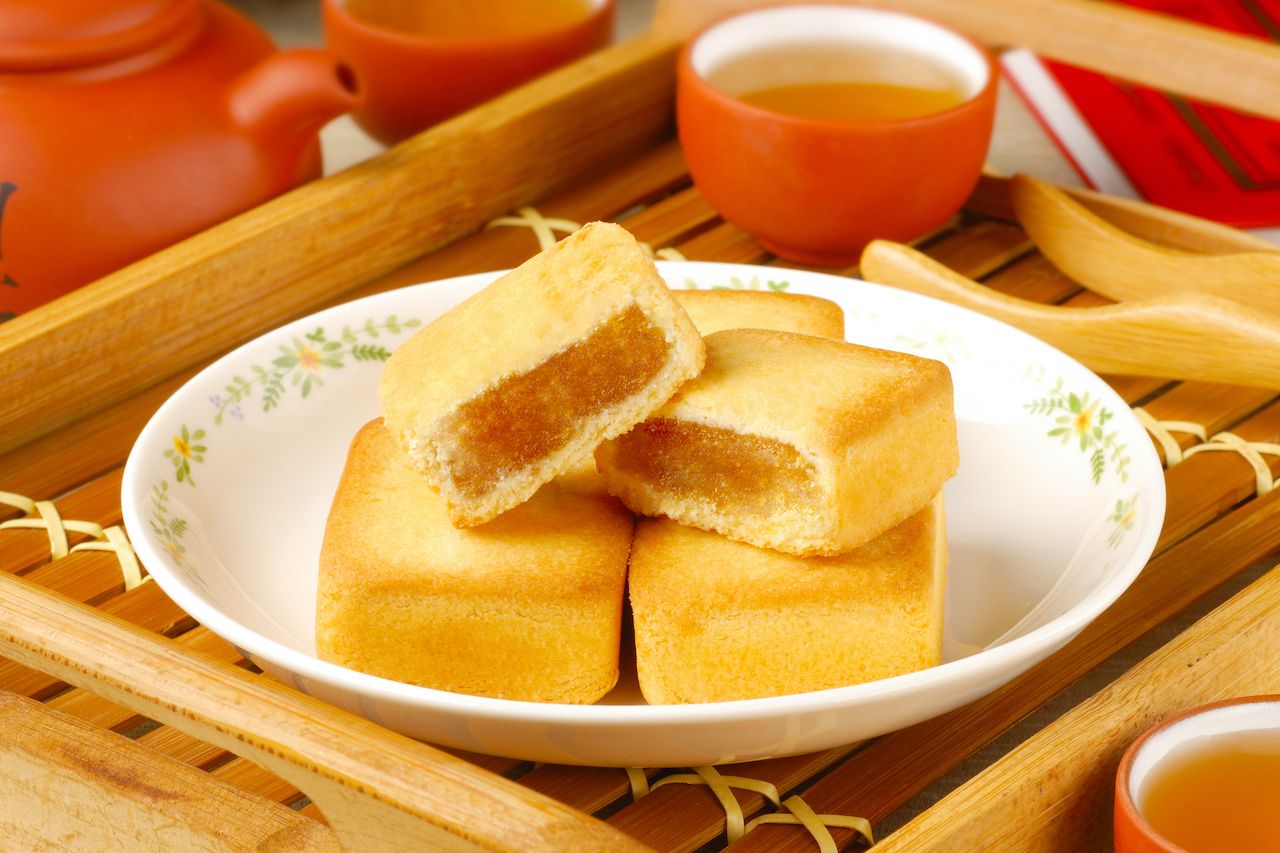 Taiwanese pineapple cake is very different from the pineapple upside-down cakes of the US. These pastries are made with a sweet dough that’s filled with pineapple jam or slices. Taiwan had a pineapple surplus in the 1930s (it was once one of the largest pineapple producing countries in the world), and bakers took to the fruit. Today, pineapple cakes are one of the most popular treats to bring back as souvenirs.

Shī mù yú tāng is a southern Taiwanese specialty that’s most popular in Tainan. It’s made from an entire milkfish (a whitefish that lives in the Pacific Ocean), and the soup is soothing and refreshing. The fish itself is flaky and a touch sweet, and the flavor is accentuated with ginger. It’s a common dish for people who have the common cold.

Ba genh is a pork and fish-paste-sauce soup that’s the ultimate Taiwanese comfort food. The savory broth is made with black vinegar and flavored with mushrooms, bamboo, and plenty of cilantro. 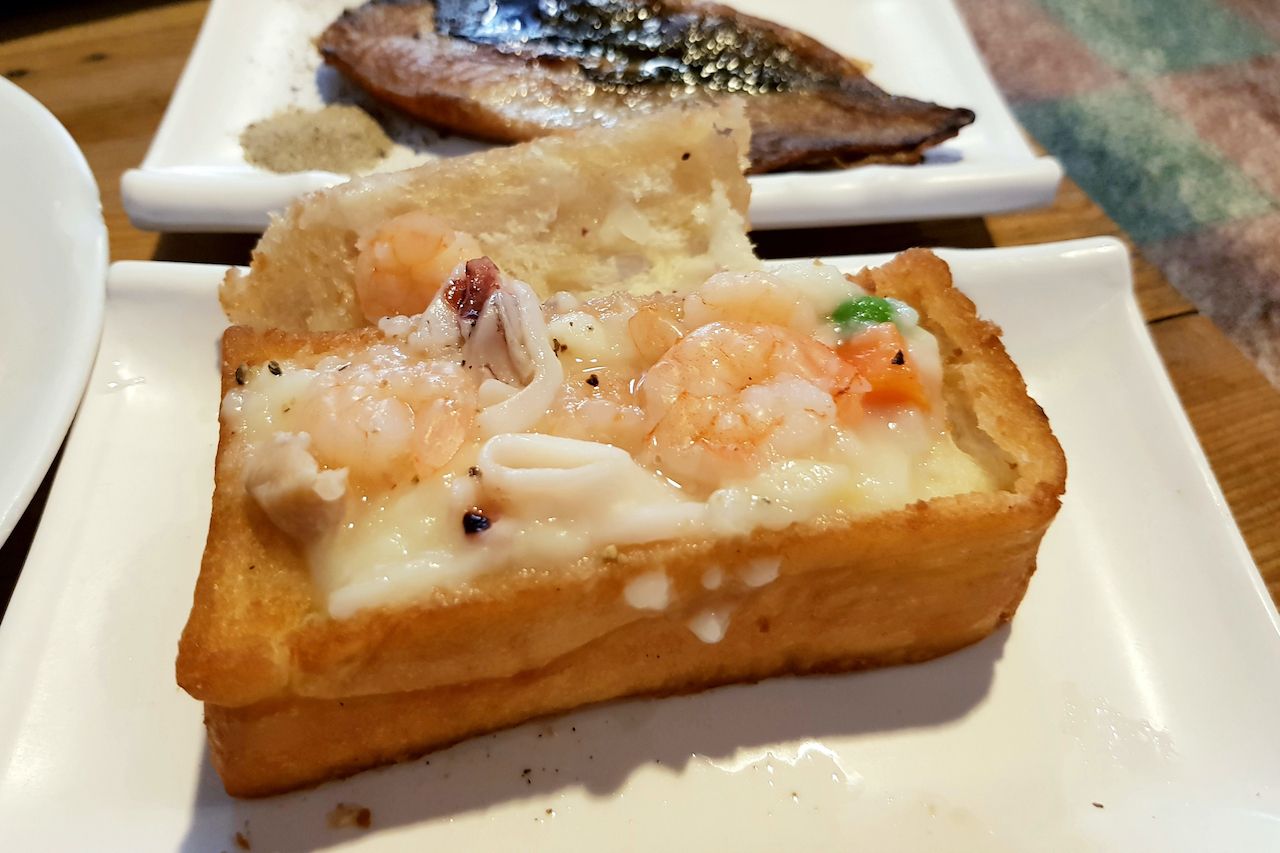 A totally wacky street food creation, coffin bread was created in Tainan in the 1940s. It’s similar to clam chowder bread bowls in the US except the coffin bread is square. The bread is hollowed out, toasted, and filled with a creamy soup. The top is placed back onto the dish before serving, hence the “coffin” in the name. The soup typically has similar flavors to chicken pot pie.

Douhua is a pudding dessert made with the softest of tofu. The tofu disintegrates and melts as soon as you take a mouthful of this sweet treat. It can be served on ice in the summertime with a gingery sweet syrup to flavor it. Douhua is also delicious heated up in the wintertime, topped with peanuts, boba, mung beans, and more.

The popularity of this local delicacy seems to have stayed in Taiwan. Seasonal baby bamboo shoots are slightly cooked, chilled, and then served with generous amounts of thick Japanese mayo. As with most simple recipes, the key to this dish is in the freshness of its ingredients. The bamboo should be fat, juicy, and seasonal — this dish is best served in the winter or in the spring.

Culture Guides15 things no one told me about living in Taiwan

A version of this article was previously published on August 23, 2017. It was updated by food and drink editor Nickolaus Hines on April 27, 2020.

5 reasons I want to travel to Taiwan

Modern toilet restaurant: A good place to let yourself go

6 of the most remote wineries in the world

May 15, 2020 Dayana Aleksandrova
✖
travelstoke
Download the mobile app
stoked by