No one style defines American barbecue. Ask anyone where to find the country’s definitive barbecue, though, and they’ll likely point you toward the South.

Four destinations in the southern United States make up what’s known as the barbecue belt: There’s Texas with its brisket, Memphis with its pork ribs, Kansas City with Missouri’s best burnt ends, and the Carolinas with their competing takes on pulled pork and slathery sauce.

Barbecue is a loose concept, however. It typically refers to meat cooked over an open flame, but that definition changes with every age-old barbecue tradition around the world. The concept also changes across the US, both inside and outside of the country’s southeastern quadrant.

If you never visit the barbecue belt, rest assured that you still have a shot at tasting some of the finest, smokiest, sauciest dishes around with these lesser-known American barbecue staples.

Chicago knows comfort food: deep dish pizza. Italian beef sandwiches. Hot dogs “dragged through the mud” with toppings like relish, white onions, pickled peppers, and tomatoes, plus a healthy squirt of yellow mustard. And, though not as many out-of-staters realize, barbecue.

Chicago’s barbecue preferences draw a line down the city, separating North and South Side loyalists. North Side barbecue places a heavy emphasis on sausages and boiled spare ribs, influences from early Eastern European immigrant populations. South Side barbecue, which some might say is the must-eat of the two, revolves around rib tips and aquarium smokers.

Rib tips are the fat ends of spare ribs. In the South Side, they’re smothered in tomato-based sauce and eaten between slices of white bread. Even more iconic is the aquarium smoker, a big glass box mounted on steel that looks like a fish tank you might find in a seafood restaurant, except with smoked meat rather than lobsters swimming around. 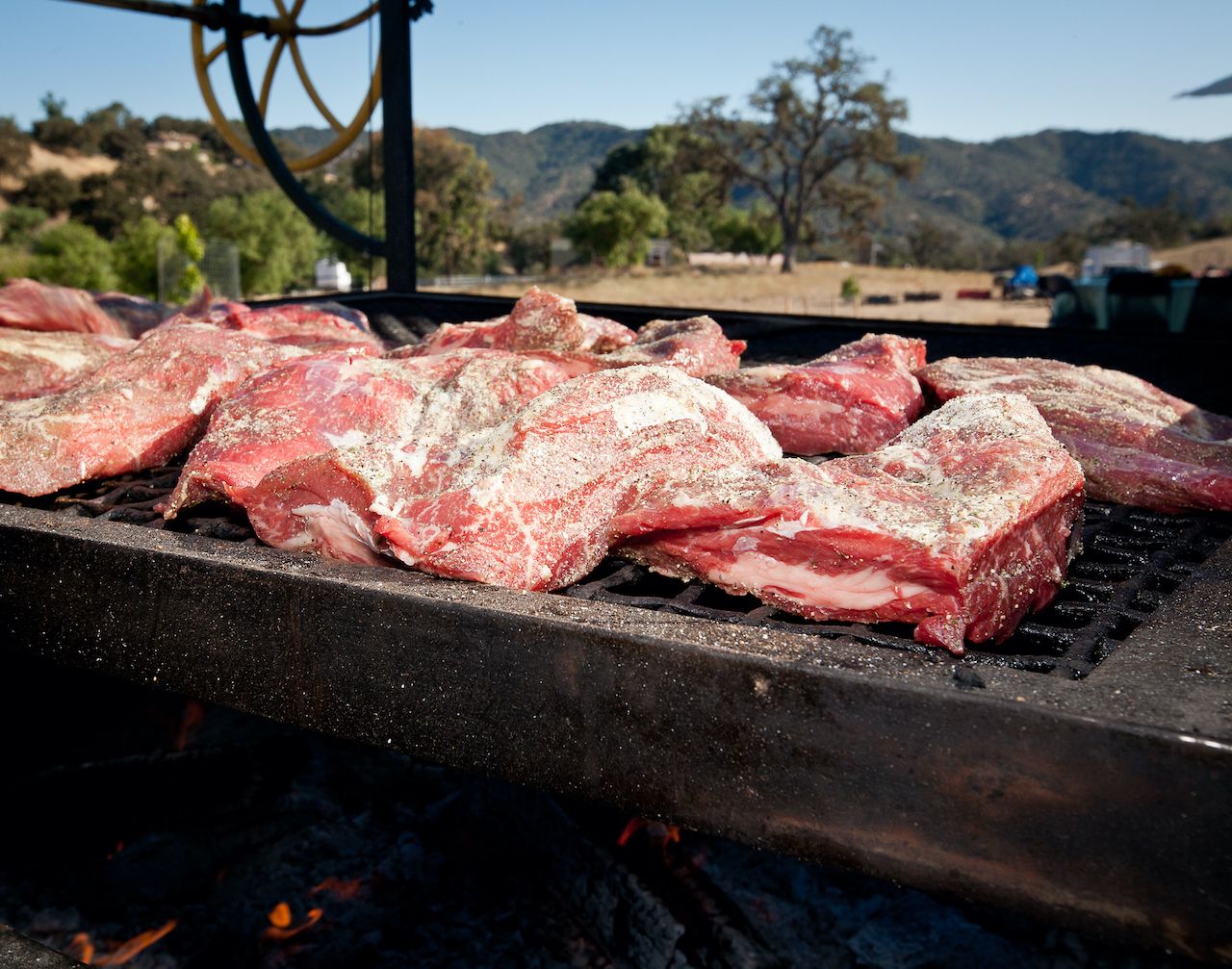 California’s not a state most people associate with barbecue, unless you count the grilled beef patties at In-N-Out Burger. Santa Maria-style earns the West Coast hub a spot on the barbecue map, however, at least where the central stretch between San Luis Obispo and Santa Barbara is concerned. A holdover of California’s Spanish and later Mexican heritage, the grilling practice dates back to the mid-1800s feasts cattle ranchers would make for cowboys, or vaqueros.

The process is simple: Beef, typically tri-tip, is dry-rubbed with salt, pepper, and garlic before being hoisted onto an iron grill, similar to the parrilla used to cook Argentinian asado. Meats like steak, venison, chicken, or chorizo may also be thrown over the coals along with vegetables. The more important rule is that, whatever the protein, it’s grilled over red oak wood. To round out the meal, Santa Maria-style feasters load up on pinquito beans and top their plates off with a spoonful of salsa.

Maryland may be the poster child for crab, but the Chesapeake Bay state also knows its way around a cow. Specifically pit beef, and specifically Baltimore. Pit beef takes round cuts, those from the cow’s rear leg, and slow roasts them over charcoal. It’s then sliced thin and piled high on a Kaiser roll or plain white bread. Pit beef sandwiches may be smothered in barbecue or tiger sauce, a blend of mayonnaise and horseradish, or possibly both. It’s unclear when pit beef became a Baltimore staple, but by the 1980s, no self-respecting Marylander could resist pulling over at a pit beef stall while driving down the Pulaski Highway. 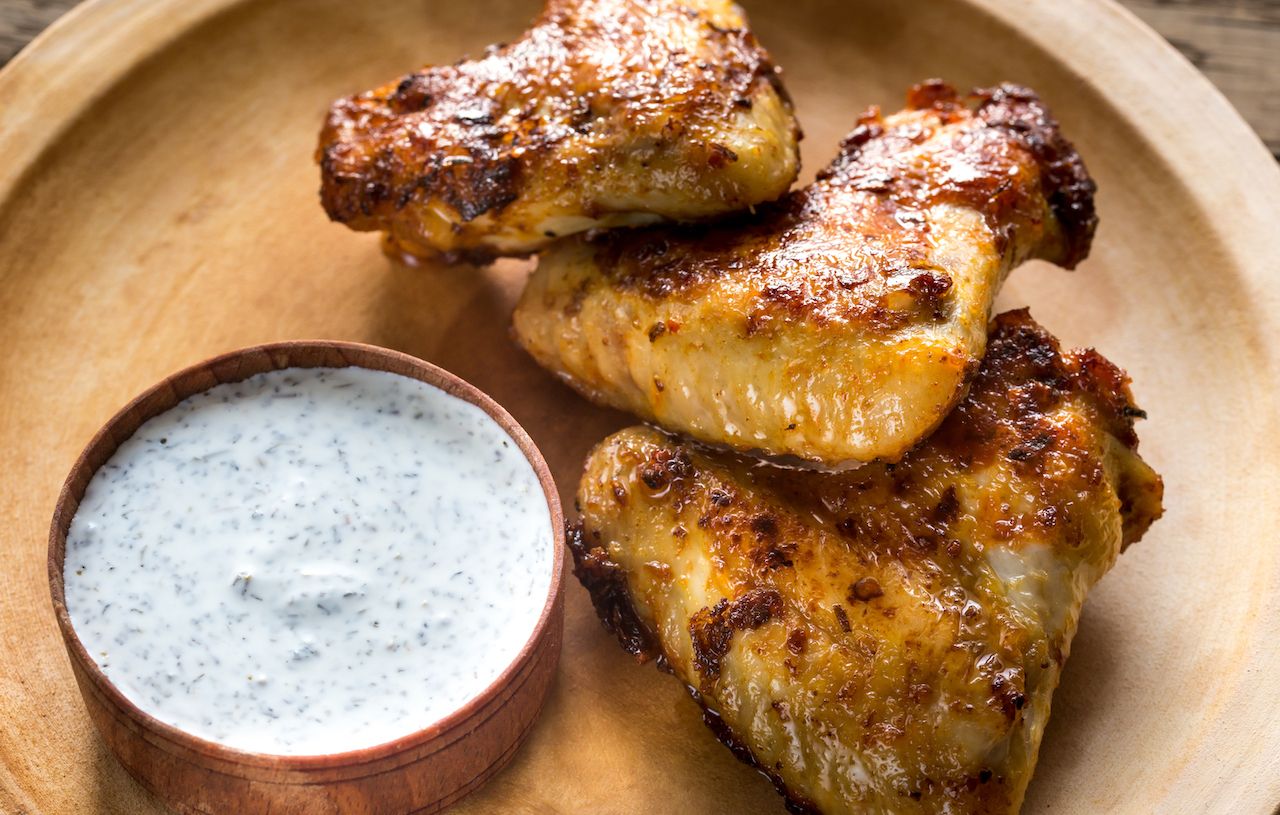 There’s a lot of talk about sauce in the barbecue belt. Or maybe debate is a better word. South Carolina’s sauce is thick and mustardy. The North Carolina standard changes from east to west, with Lexington-style sauce leaning on ketchup and Eastern-style sauce resting on a simple vinegar-pepper blend. Texas sauce is generally smokier and more heavily spiced, though many central Texans prefer their barbecue sans sauce.

Alabama’s go-to slather hardly looks like barbecue sauce at all. It’s white, thanks to its mayonnaise base, and tangy, owing to a liberal use of vinegar and the occasional addition of horseradish. More often than not, white sauce is smeared over chicken as a marinade, base, or condiment. Sometimes it’s used as all three, just the way inventor Robert Gibson of Big Bob Gibson’s Bar-B-Q in Decatur, Alabama, intended.

Just north of Tennessee and east of Missouri, Kentucky sits smack in the greater barbecue belt, even if it’s not one of the big four destinations. Though beef and pork dominate barbecue menus elsewhere, it’s sheep that reigns supreme in Kentucky, specifically mutton. Owensboro in Daviess County is the state’s authority on barbecue mutton, possibly even the world’s. There, local institutions like Moonlight Bar-B-Q serve everything from chopped mutton plates to sliced mutton sandwiches to mutton ribs. To get the characteristic Kentucky taste, pitmasters smoke the meat low and slow over hickory wood. 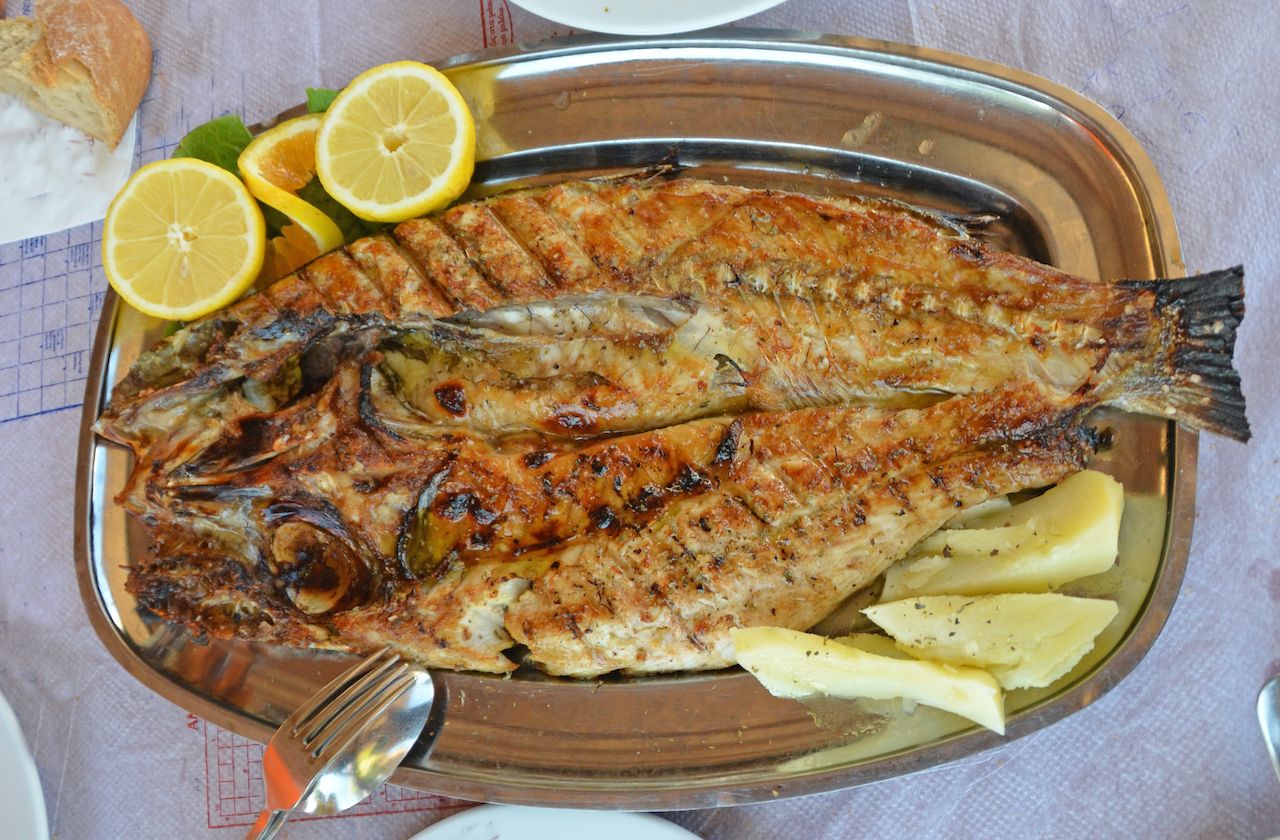 Florida may belong to the southern United States geographically, but it’s controversial to count it as the American South. Culturally, Florida is a state unto itself, and culinarily, a city like Miami seems to have more in common with Havana than Memphis. But like most states in that part of the country, Florida has its very own barbecue scene, one with a Latin-Caribbean flare.

Citrus is a predominant flavor in Florida-style barbecue sauces. Orange juice and apple cider vinegar is a popular combination. Tropical fruits like mango and pineapple might add complexity, and hot peppers provide an extra kick. Yet the ingredient most representative of Florida barbecue is mullet, a fish found in tropical waters. Smoked striped mullet, sometimes called Biloxi bacon after the coastal city in Mississippi, is eaten plain with tartar sauce or mixed with cream cheese, mayonnaise or sour cream, hot sauce, lemon or lime juice, garlic and onions, Worcestershire sauce, and a variety of herbs and spices to make a delicious, barbecue-y dip.

Barbecue? In Oklahoma? “What a load of baloney,” you might be thinking. And, in a way, you’d be right. Most Southern barbecue classics are easy to come by in Oklahoma. Pulled pork abounds, and Texas-style brisket is a specialty. Local sauces resemble those in Kansas City, which use ketchup as a base, though they’re generally applied with a lighter hand. But when it comes to local Oklahoma barbecue, smoked bologna is the Sooner State’s claim to fame.

Locally, smoked bologna is nicknamed “Oklahoma tenderloin” or “Oklahoma prime rib.” Preparations vary, though thick cuts of of the pork sausage are a popular sandwich filling. Pit bologna is most often piled onto Texas toast or a plain bun with other barbecued meats such as hot links. There’s some debate as to where the craze originated, with both Tulsa and Oklahoma taking credit, but Sooners can all agree that smoked bologna is a statewide staple. 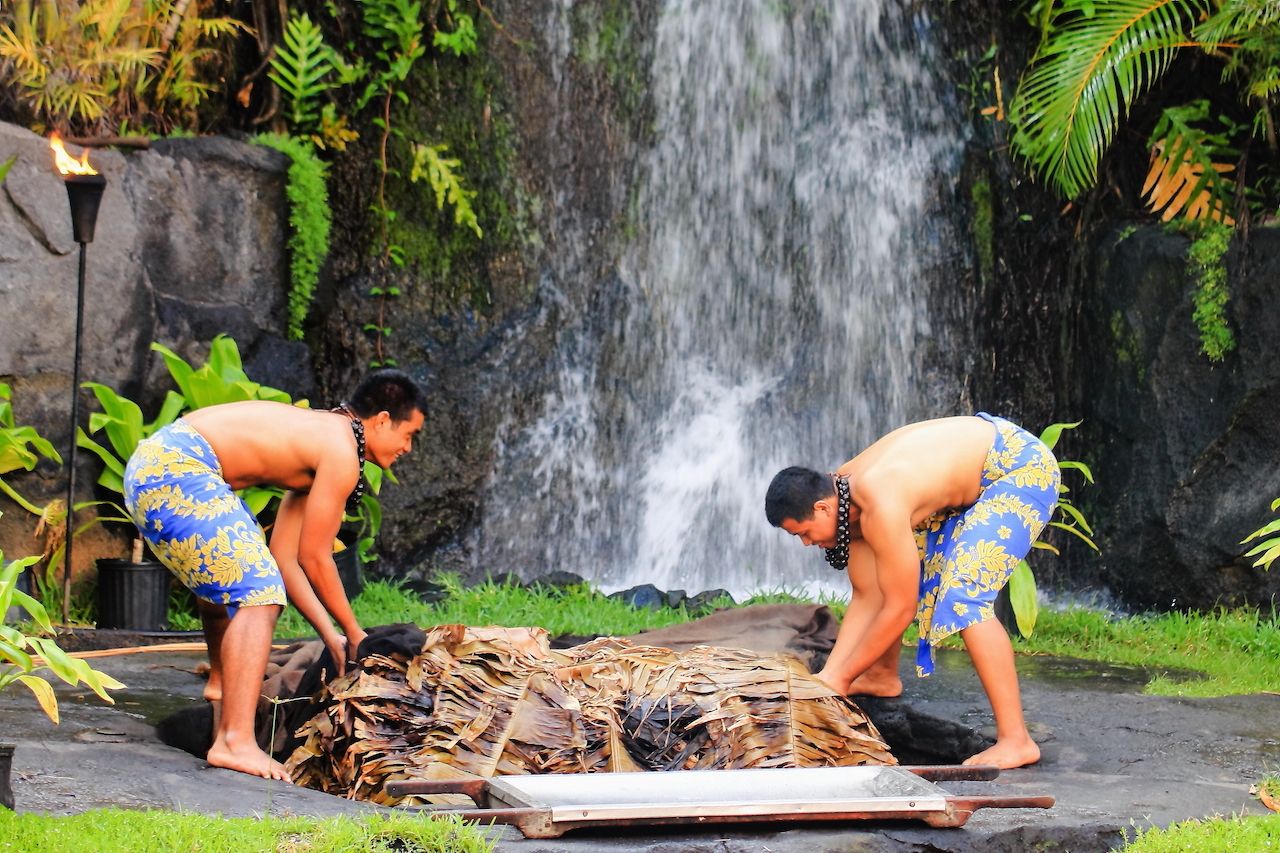 Picture a Hawaiian luau, and a whole roasted pig probably comes to mind. Hawaiian barbecue centers on kalua-style cooking, referring to meats that are cooked in an underground oven known as an imu. Kalua pig is the most common: It’s thrown in a pit over a fire, loaded up with lava rocks, covered with banana leaves to seal in flavor, buried, and left to bake all day. Other proteins, such as turkey, may also be cooked this way. During barbecue blowouts, Hawaiians typically fill their plates with other grilled meats, including beef and chicken, as well as sauces and sides that borrow flavors from both the South and East Asia.

Food + DrinkThe ultimate beginner’s guide to every style of Texas barbecue
Tagged
Food + Drink United States
What did you think of this story?
Meh
Good
Awesome