If there’s one thing Bay Area folks love, it’s bikes. Well, okay — maybe it’s Patagonia down jackets and kombucha, but biking is a close second. San Franciscans ride to work via The Wiggle (a zig-zagging route that more or less avoids the city’s hills), then spend their weekends cycling through Golden Gate Park.

Marin County’s own Mount Tamalpais is known as the birthplace of mountain biking and is still home to many Bay Area bike tours for cross-country and downhill riders, while the East Bay’s regional parks have some of the sweetest singletrack around. Factor in boozy bike rides around Wine Country and the coastal trails of the peninsula, and it’s easy to see why the region is so obsessed with moving on two wheels. Whether you’re a local looking for an afternoon date idea or an out-of-towner looking to see the city from a different perspective, one of the 11 Bay Area bike tours below will definitely suit your needs. 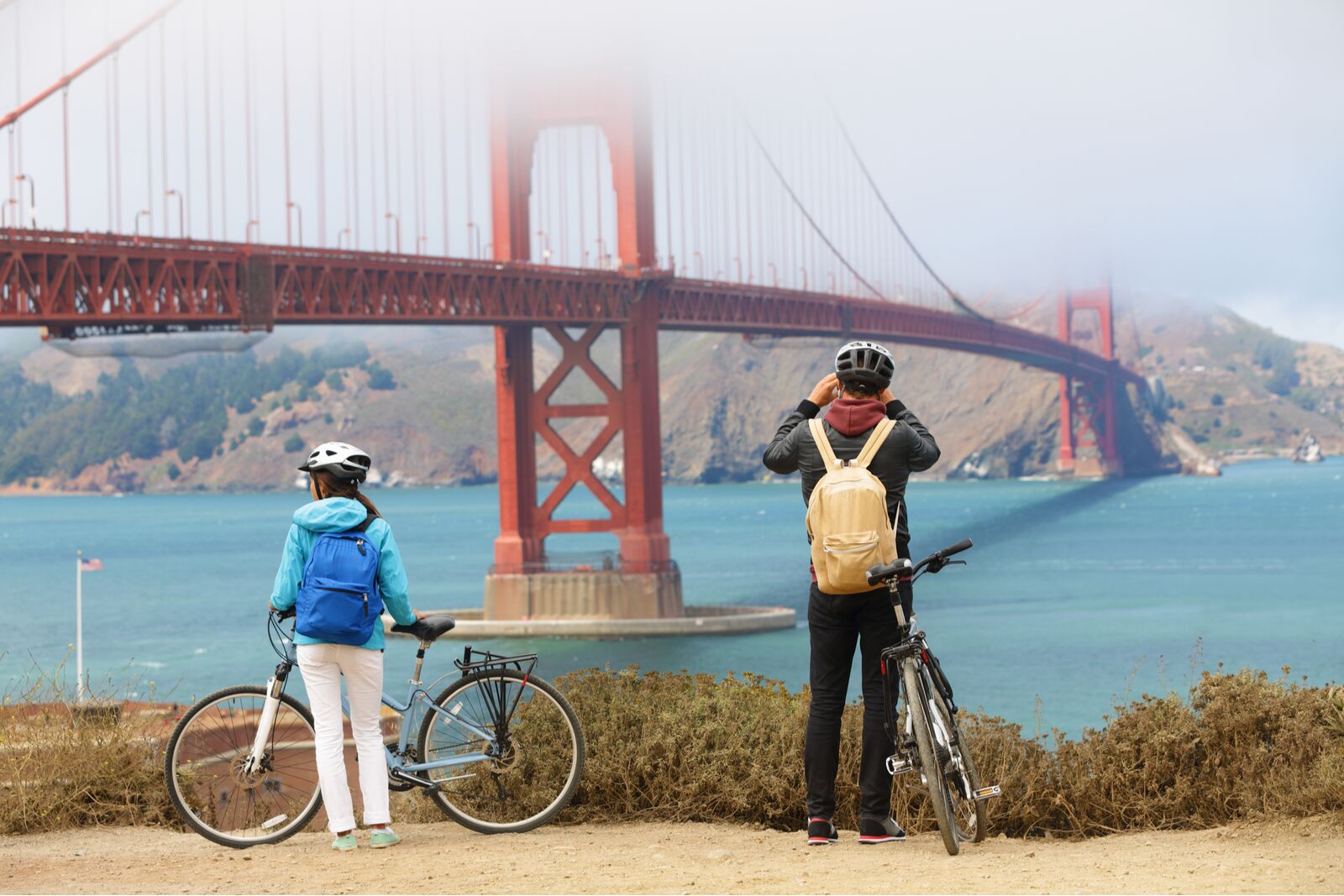 If you’re from San Francisco, the first thing that comes to mind when you hear the name Blazing Saddles is probably not the 1974 Mel Brooks comedy, but the bike rental company that’s been putting tourists on two wheels since 1982. From guided tours of San Francisco’s hits to self-guided tours of Angel Island, the Marin Headlands, and more landmarks across the Golden Gate Bridge, Blazing Saddles has a bike for every rider and route—road, gravel, mountain, electric, hybrid, tandem, you name it.

For a fun and easy weekend Bay Area bike tour, try the eight-mile, three-hour Golden Gate Bike and Brew Tour, which starts at Fisherman’s Wharf, winds through Presidio National Park, and crosses the bridge into the bayside city of Sausalito, where you’ll get a $20 voucher to spend on a local-favorite brew. 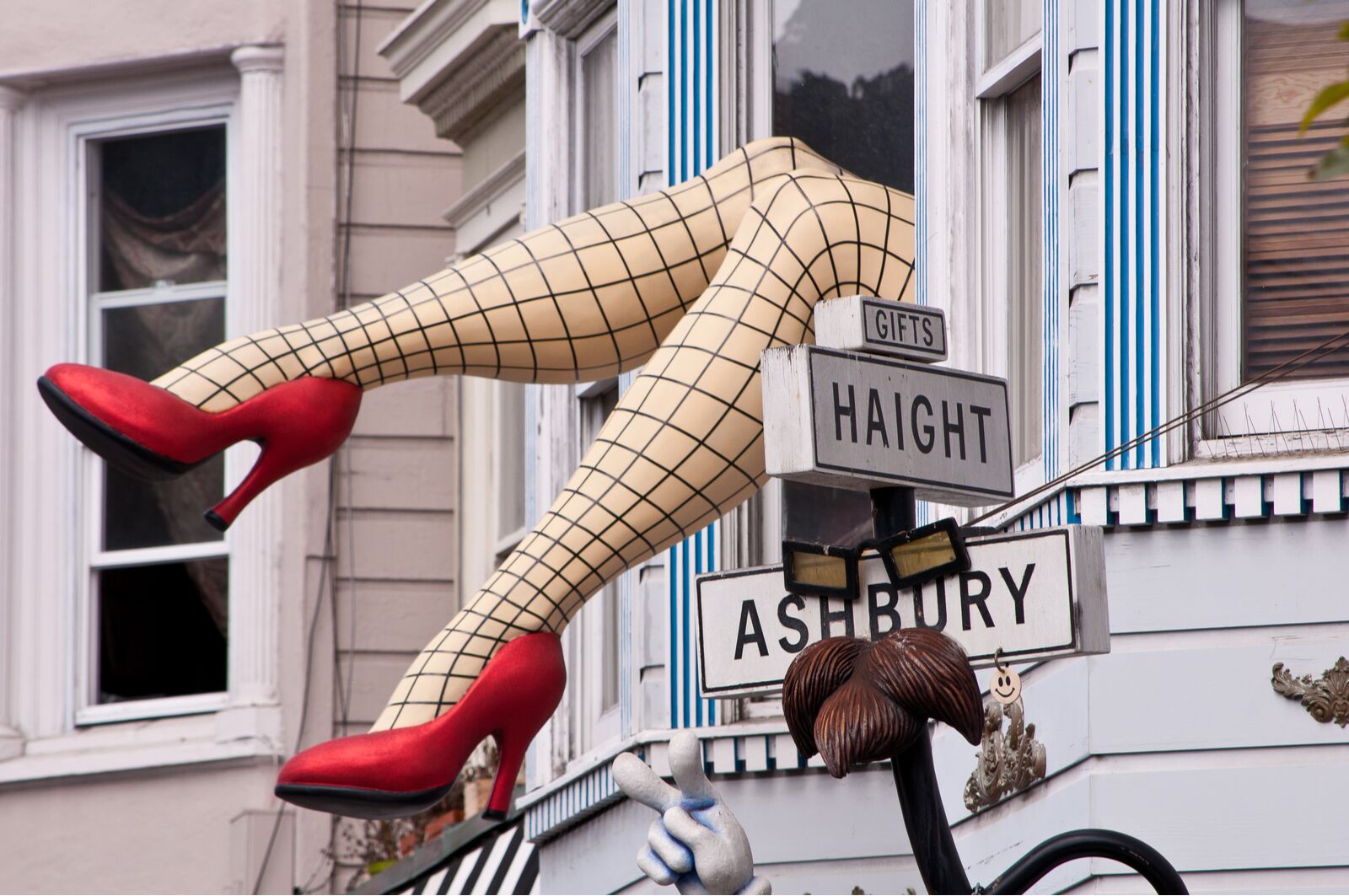 Specializing in e-bike tours, Dandhorse San Francisco Bike Tours has three itineraries: the 18-mile Essential Tour of the city’s major attractions, the 12-mile Mighty Local Tour of tourist-free neighborhoods, and the 25-mile Epic Tour that covers both. If you have 5.5 hours, the Epic Tour hits some of the city’s best viewpoints, including Twin Peaks, Billygoat Hill, and Bernal Heights Park — and includes a picnic lunch on Baker Beach.

The Mighty Local Tour is a quicker ride, roughly 3.5 hours, but no less adventurous as it takes riders to parts of the city they may not recognize even if they live there. You’ll see all the San Francisco staples, including crooked streets, Victorian architecture, murals and mosaics — but they’re not going to be in the usual places you’d expect. Plus, while you’re out exploring the Dogpatch, Potrero Hill, and Mission Bay neighborhoods, you’ll be able to scope out all the best breweries, eateries, and ice creameries in southeast San Francisco. 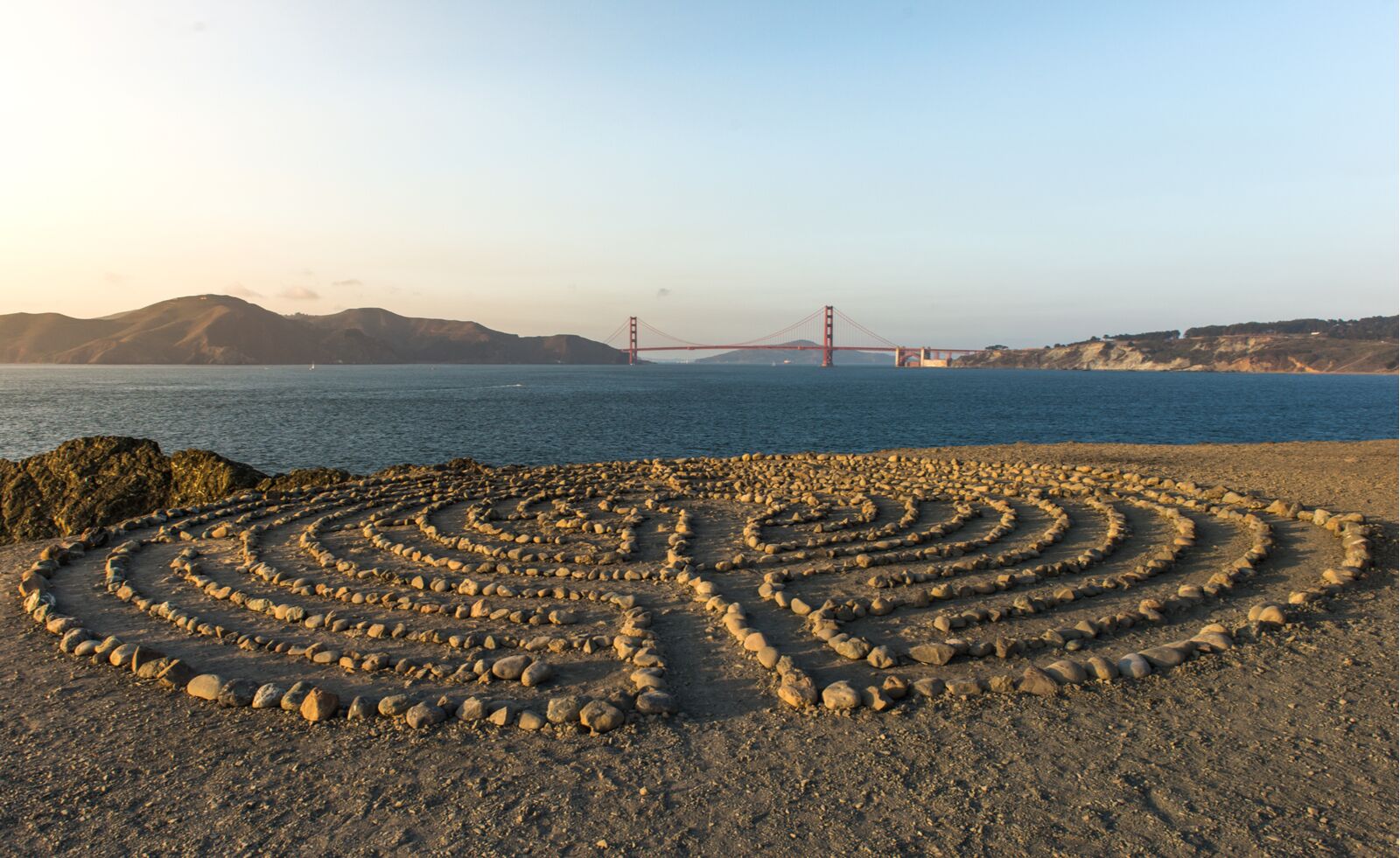 San Francisco’s surfers may lay claim to Ocean Beach’s waves, but the Great Highway Bike Path that runs parallel to the shore makes space for cyclists on the city’s Pacific Coast, too. That’s where the Beach to Bridge Tour by EcoBike Adventures meets, at the foot of Golden Gate Park on the north end of the beach.

From there, riders hug the coast for two to three hours on e-bikes that give you a boost on the climb toward landmarks like the Lands End Lookout and the Legion of Honor. Then, it’s on to the Presidio, a former military post turned national park site, to end up at the Golden Gate Bridge. It’s a classic San Francisco ride and one of the best Bay Area Bike tours if you care about protecting the coast. All of the e-bikes are solar-charged, and EcoBike Adventures partners with 1% for the Planet — a non-profit working to combat climate change. 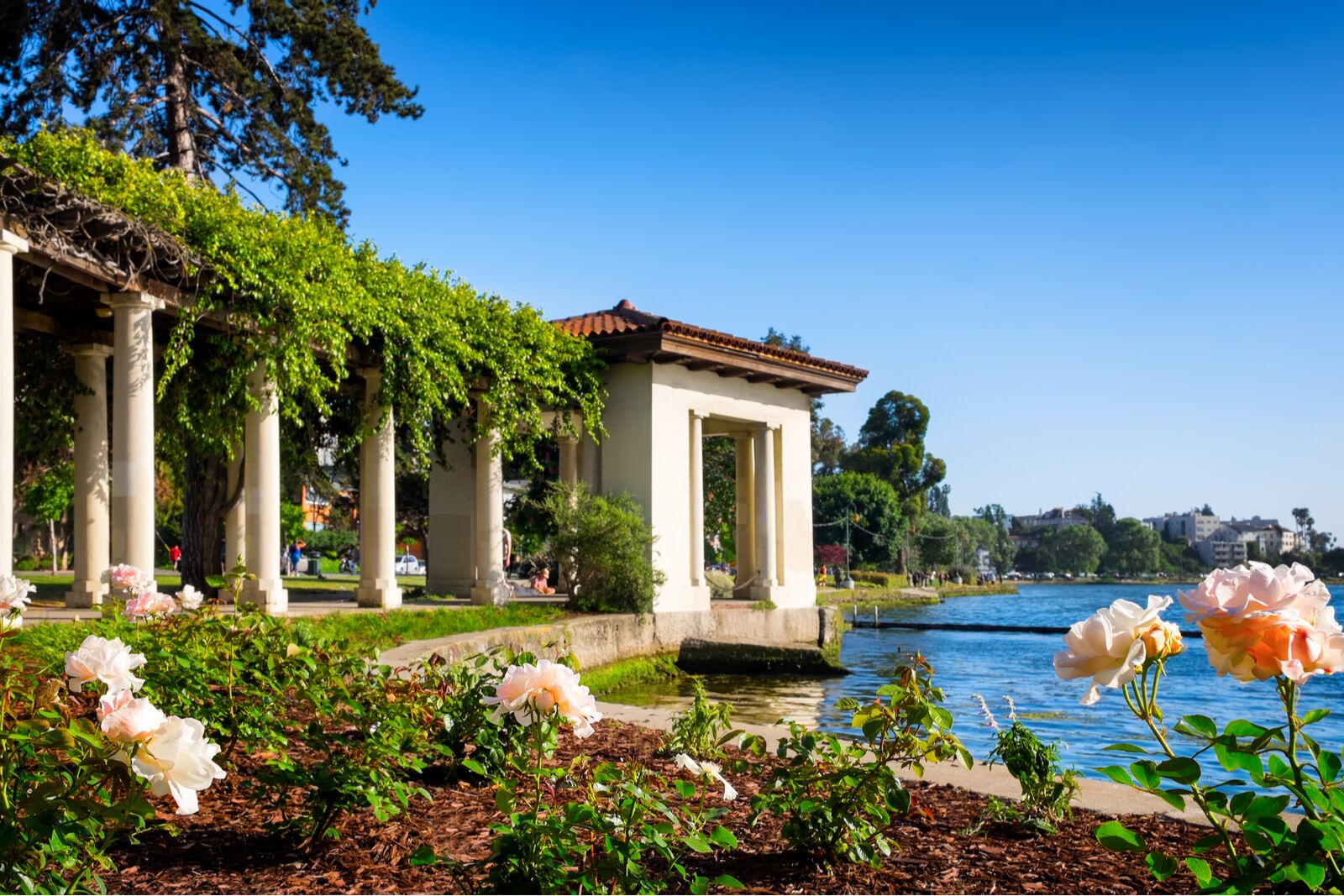 There’s a surprising lack of reliable Bay Area bike tours and operators around the East Bay. Luckily, this Airbnb Experience closes the gap. The tour hits all of Oakland’s highlights, starting downtown near City Hall before weaving between Old Oakland, Uptown, Jack London Square, and Lake Merritt. It’s a casual, low-key ride for locals or visitors who wants to get to know the city better.

The host is a longtime Bay Area resident who loves showing off Oakland’s “nooks and crannies” and sharing her expertise in urban planning and local politics. She provides helmets, but not bikes —  you’ll get acquainted with the local bike-share system (Bay Wheels) during the tour. 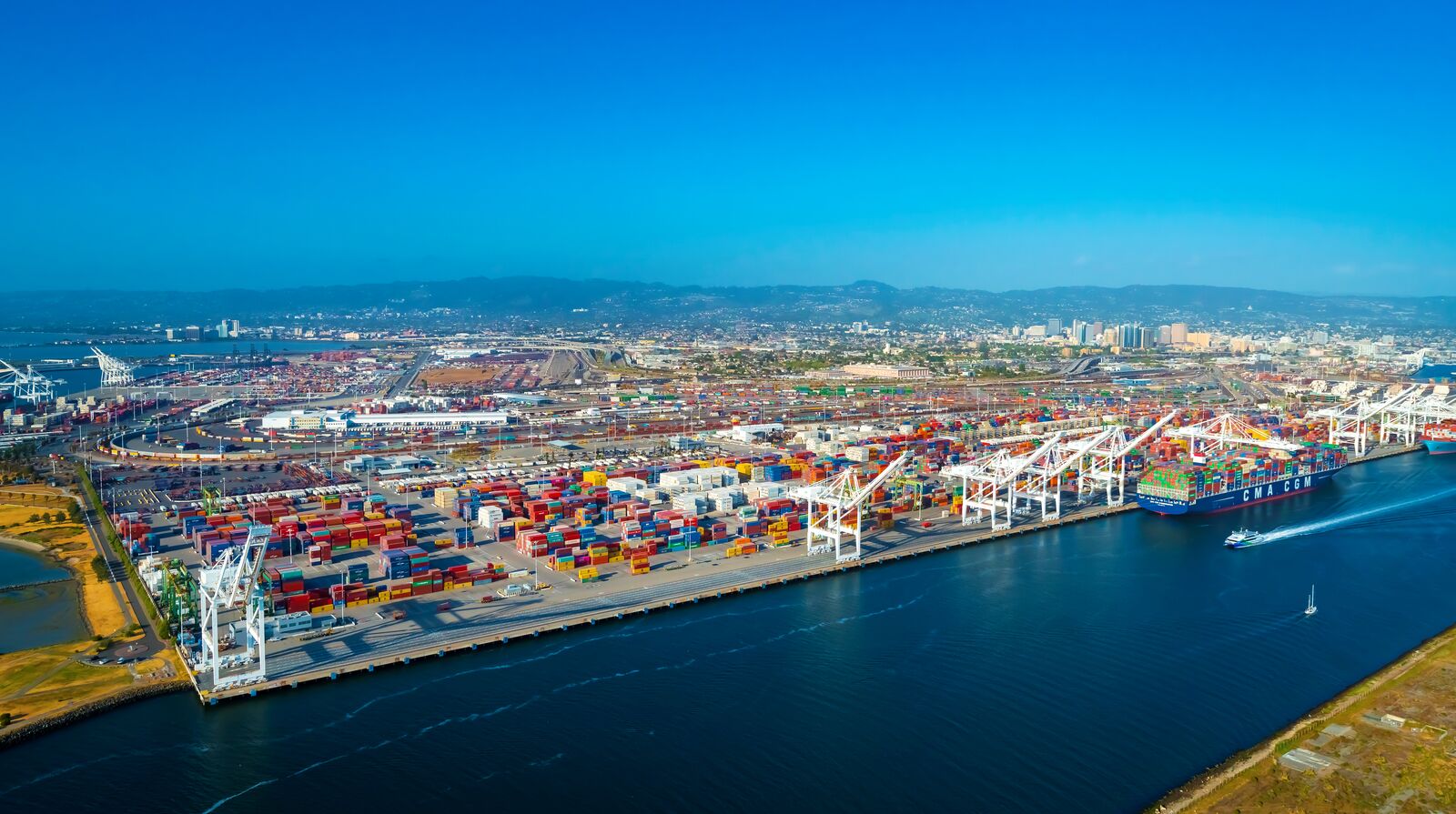 One of the East Bay’s foremost museums, the Oakland Museum of California (OMCA) celebrates the arts, history, and natural sciences of the Golden State. And one Sunday per month between July and October, the museum also stages a bike tour of downtown Oakland, the Port of Oakland, Lake Merritt, and Fruitvale. The Bay Area bike tour is led by OMCA docents and Oakland Public Library staff and, better still, is totally free. Participants just need to bring their own bikes. There are multiple Bay Wheels ports within a couple of blocks of the museum if you don’t have one, and a day pass is just $10.

The best bike tours outside the city 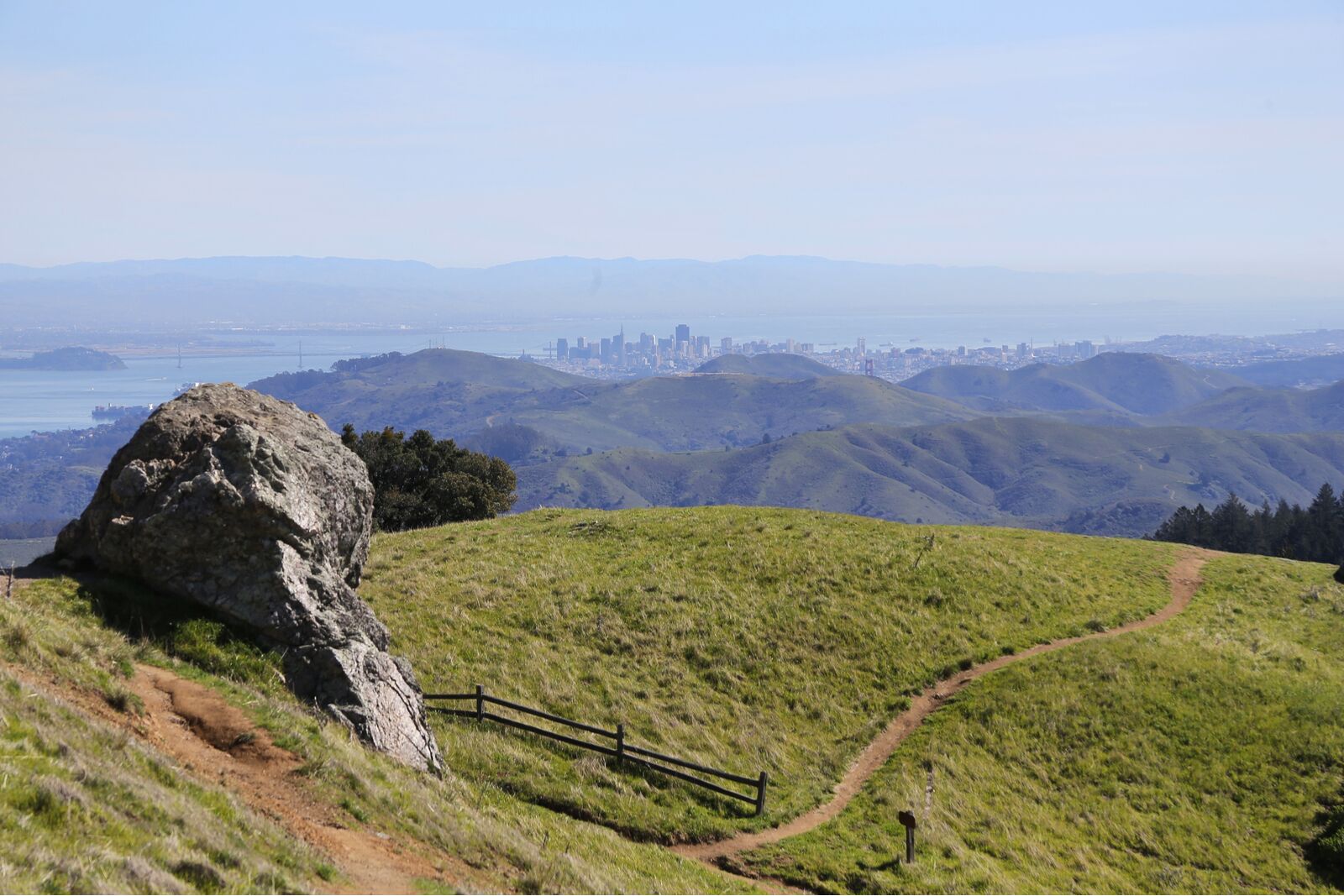 Blazing Saddles offers more than just one tour, including one of the best self-guided bike tours in Marin. Riders have three options, all of which are considered intermediate or advanced. You can climb 20 miles of coastal hills in the Marin Headlands immediately across from the Golden Gate Bridge, follow a 28-mile offshoot of the Headlands in Tennessee Valley, or head farther north to bike the East Peak of Mount Tamalpais.

But if you can only do one, do Mount Tam. Not only does the ride yield some seriously stunning panoramas of the entire Bay Area, but Mount Tam is the exact mountain where modern-day mountain biking got its start, so there’s no better place to rub elbows with die-hard riders. And you have to be pretty serious about it; there’s a 2,000-foot climb to reach the epic views. 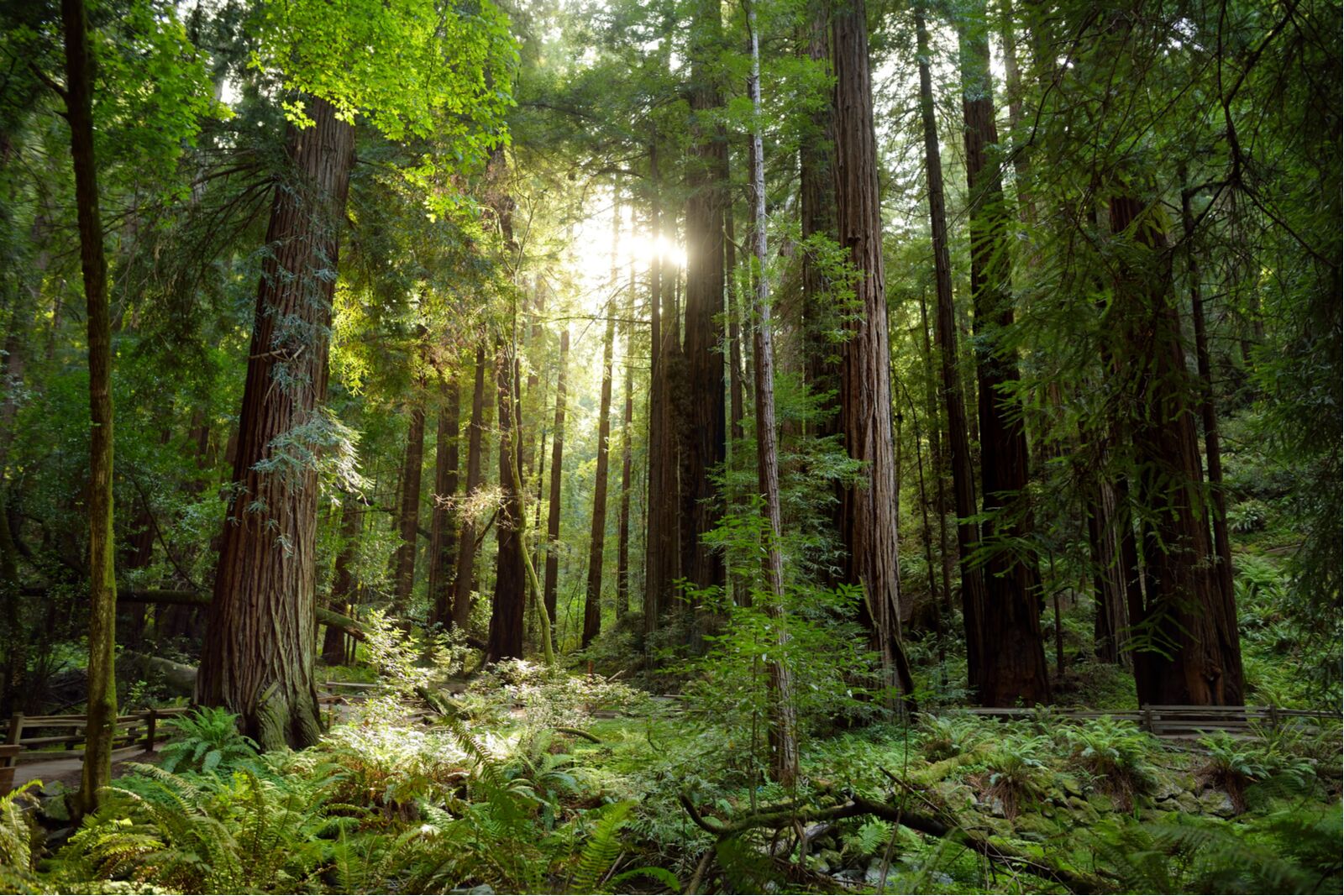 Speaking of mountain bikes, Norcal Flow hooks riders up with high-end, full-suspension mountain bikes for tours in both the North Bay and South Bay. The Marin ride centers on Muir Woods and its famous old-growth coastal redwoods, as well as Muir Beach and Mount Tamalpais. It’s a great way to see the national monument, given that you need reservations to access Muir Woods by car or shuttle and the parking lots fill up fast. If you failed to plan ahead, just let Norcal Flow sort out the logistics, which includes a pick-up from San Francisco. 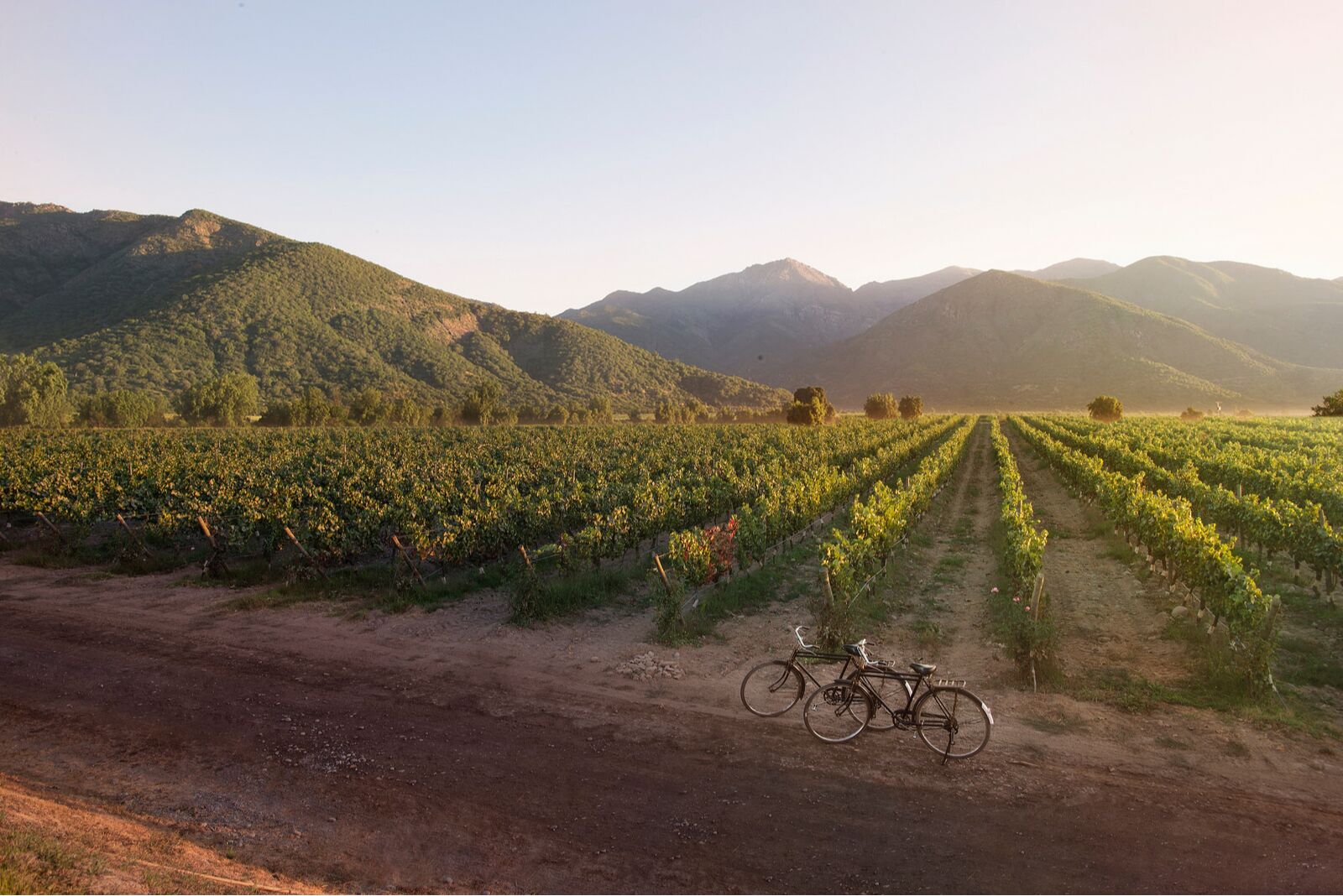 Between its flat country roads, grapevine-embroidered estates, and built-in rest stops, the Bay Area’s Wine Country was made for bike tours. With two locations in downtown Napa and Yountville, Napa Valley Bike Tours is a leading e-bike tour agency with options for both half-day and full-day wine-centric Bay Area bike tours. If you have time, take the full-day tour, which covers roughly 20 miles round-trip along the Napa Valley Vine Trail, stops at two wineries, and includes a picnic lunch from celebrity chef Thomas Keller’s Bouchon Bakery. For an extra-special outing, you can also tack on a hot-air balloon ride to either tour. 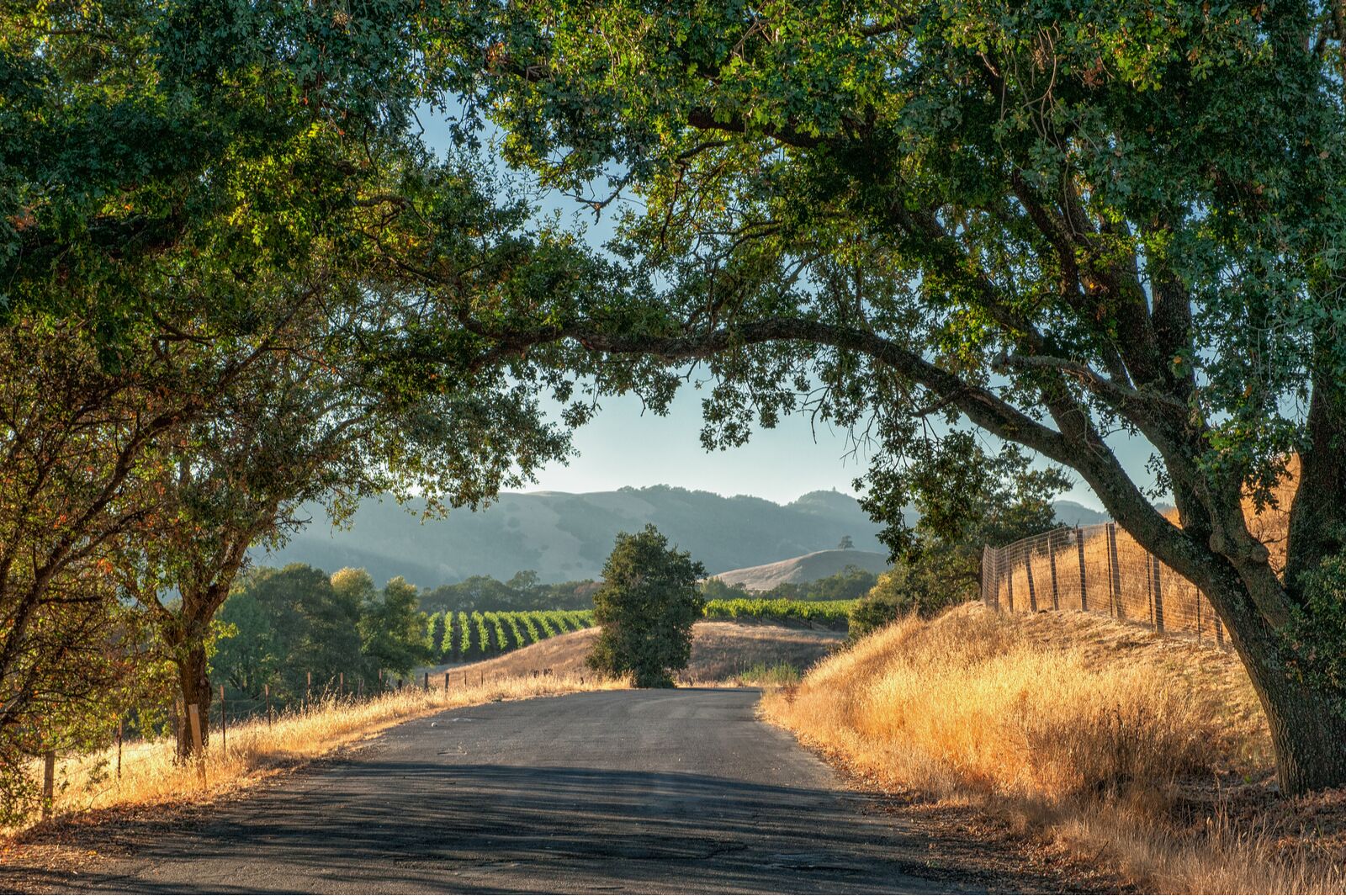 The only thing better than a bike and wine tour is a bike and wine and cheese tour. On this full-day excursion from Sonoma Valley Bike Tours, you’re not only signing up for two winery visits but also cheese and olive oil tastings, plus a picnic lunch catered by the gourmet deli Sonoma’s Best. Riders have their pick of e-bikes or standard bikes, depending on how much effort you want to put in. The tour generally covers between 10 and 15 miles, with stops between every two and five miles. 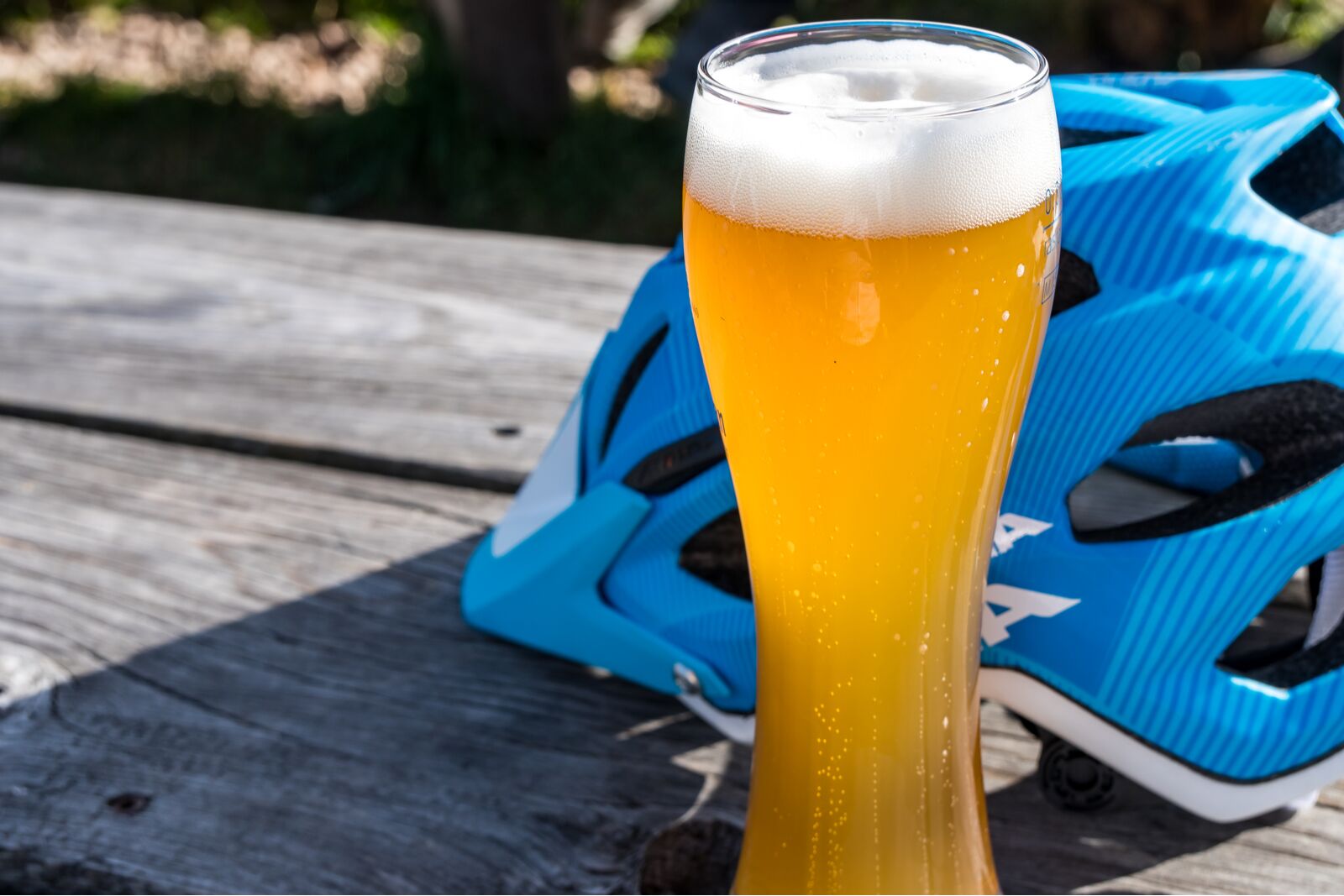 If rosé all day sounds like too much for you, swap the North Bay’s wine roads for its ale trails. Ace It Bike Tours organizes a five-hour beer-focused bike tour of Sonoma County. It starts and ends in downtown Santa Rosa, which has more than 25 breweries, including Russian River Brewing Company and Three Street Aleworks, with stops in nearby cities like Sebastopol, where riders may get to see Hopmonk Tavern’s 115-year-old building and beer garden. Bikes, insulated beer bike carriers, handlebar bags, and the rest of the necessary gear are provided, but if you have your own bike to bring, Ace It will knock $10 off your booking. 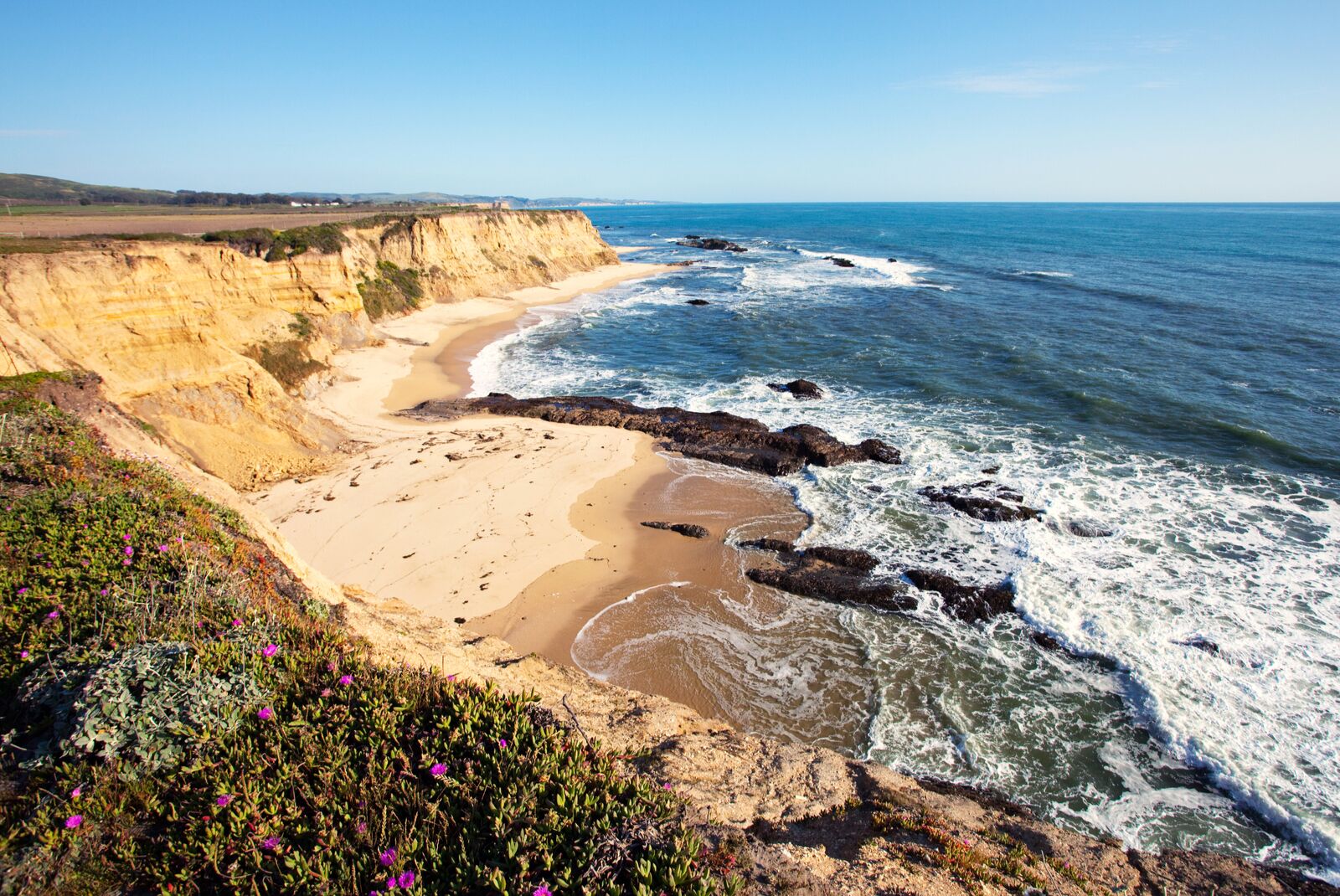 As far as scenic rides closer to the South Bay go, it’s tough to beat Half Moon Bay’s stretch of the California Coastal Trail. It’s an easy enough trail to follow on your own if you already have a bike, but if not, the Half Moon Bay Kayak Company can set you up with all the necessary gear, including bikes, helmets, windbreakers, and a guide who comes bearing snacks. The ride takes about three hours, following a paved trail past the Peninsula’s sandy bluffs. The pace is gentle, but time permitting, you’ll make it to the town’s Main Street where you can grab an espresso and a pastry at Cafe Society before heading back to HQ at Pillar Point Harbor.

HikingHow To Tackle the Best of San Francisco on Foot With the New Crosstown Trail
Tagged
Cycling Outdoor San Francisco, CA, United States
What did you think of this story?
Meh
Good
Awesome