Some states are known for their beauty and draw travelers from around the world. Who hasn’t heard talk about the beauty of California’s Big Sur or Montana’s Glacier National Park?

Still, other states aren’t particular known worldwide for being filled with natural beauty. But some of those states — the under-the-radar, not-packed-with-tourists states — are actually overloaded with natural wonders if you know where to go.

And as anyone who has lived there knows, the Keystone State is certainly one of those places. The most beautiful places in Pennsylvania range from waterfalls to geological formations to wildlife phenomena that do indeed draw visitors from around the country. Believe it or not, Pennsylvania has more than 86,000 miles of rivers and streams (only Alaska has more) and has at least 200 mapped and measured waterfalls.

So if you thought the state was all Pittsburg and Philadelphia, think again. Matador rounded up 10 of the most beautiful places in Pennsylvania to convince you that the state’s 46,000 square miles certainly aren’t lacking for places to marvel at the natural world. 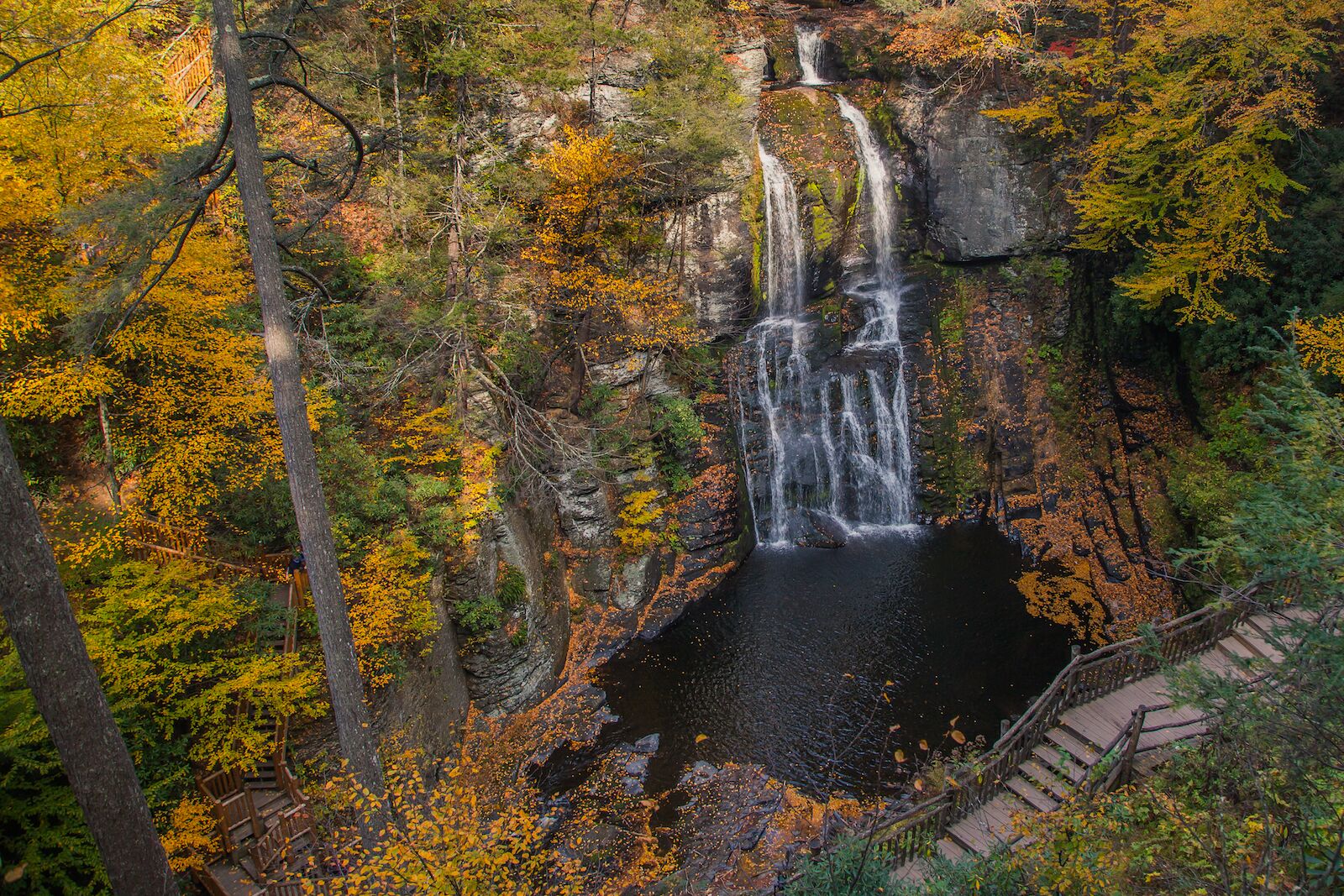 Bushkill Falls is one of many waterfalls in the state, but its size — and the beautiful surroundings of the Poconos — make it one of the most beautiful places in Pennsylvania to see if you only have a long weekend. The tallest drop of Bushkill Falls is about 100 feet tall, though the complete series of individual falls eventually drops more than 300 feet. Both easy and intermediate trail options are available for reaching the falls, all of which offer great vantage points thanks to multiple bridges and decks crossing the various streams.

Though the falls are the star attraction, there’s more to do in the park, including a visitors center with rotating exhibits and a cheesy-but-fun chance to pan for gemstones. The park is privately owned and admission is around $15, with extra fees for renting fishing poles or paddleboats. It’s open from early April to late November, though hours vary throughout the year. 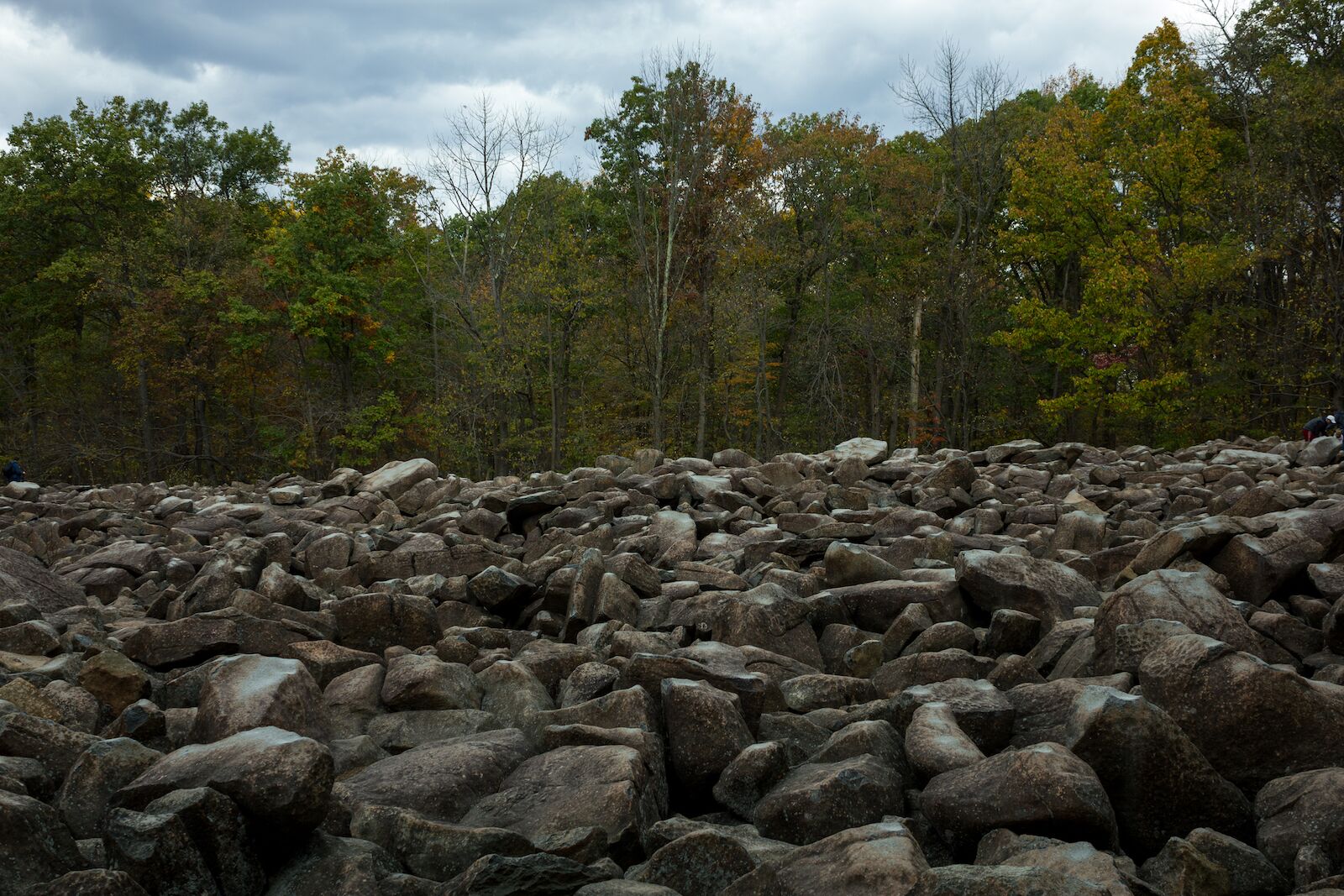 Okay, Ringing Rocks may not look like one of the most beautiful places in Pennsylvania, but it’s the mystery of the rocks that makes them so fascinating. The rocks at Ringing Rock Park look like a standard scree field, but if you give them a tap with a hammer, you’ll be shocked at what happens: they make a ringing sound exactly akin to hitting a bell. The research is still out on why exactly it happens, but if you want to do your own research, just be sure to B.Y.O. hammer.

There are only a few places in the world where you can experience rocks like these; in the US, it’s just Pennsylvania and Montana. But around 15 places across the world have rocks like these, found in places like Fiji, Scotland, India, and Namibia. 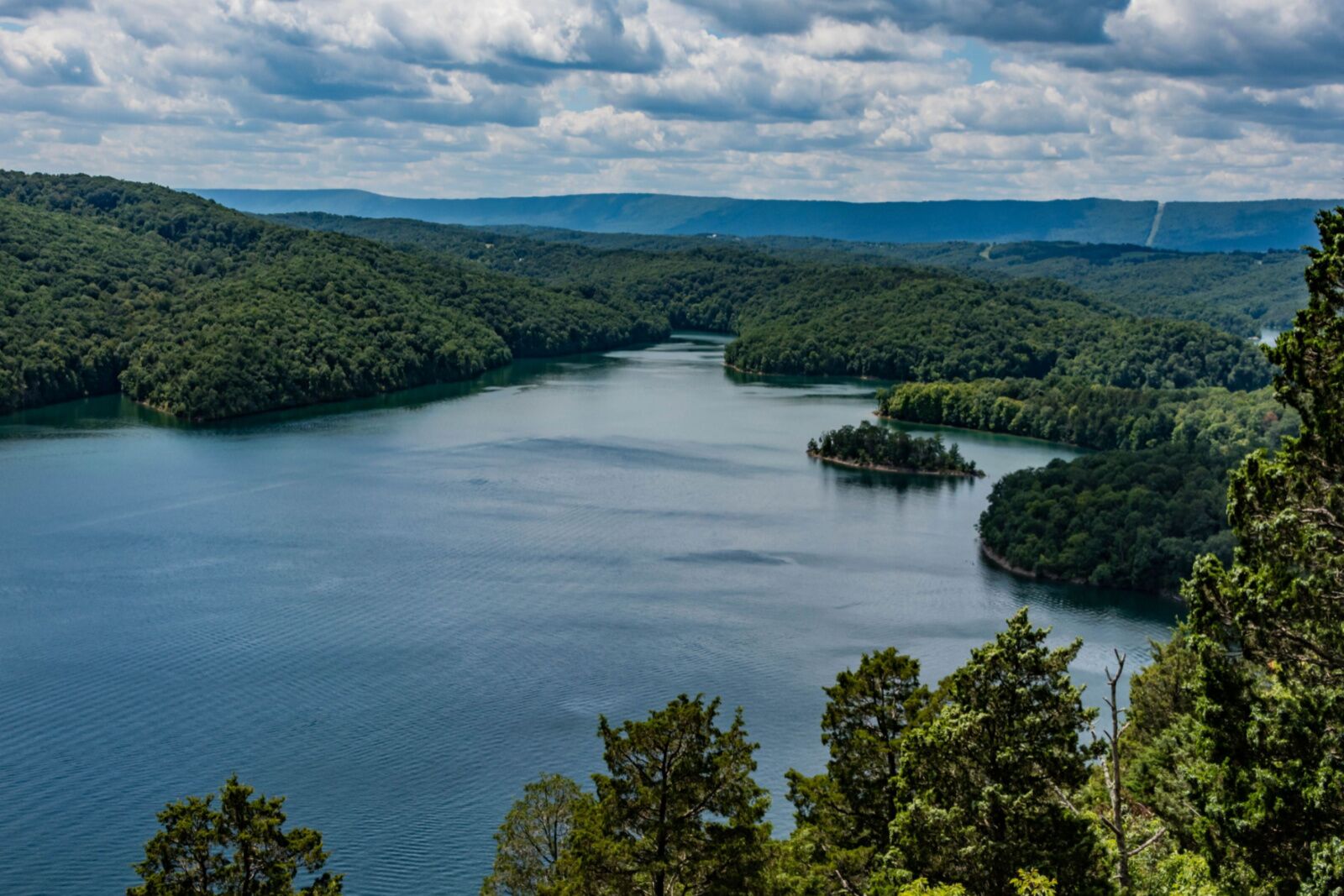 If you watched the Netflix show Ozark, you got a chance to see how stunning the Ozark Mountains are. And if you head to Hawn’s Overlook, one of the most beautiful places in Pennsylvania, you may think you’ve somehow traveled to Missouri.

But no — you’ll just be overlooking Raystown Lake, the largest lake entirely in Pennsylvania (Lake Eerie and Pymatuning Reservoir are split between states). Raystown Lake is in central Pennsylvania, and it’s a relatively easy walk to reach Hawn’s Overlook and the nearby wheelchair-accessible Ridenour Overlook.

There’s plenty to do around the lake besides hiking (and admiring natural beauty), like cave tours, mountain bike trails, distilleries and wineries, and pop-up festivals and farmers markets. 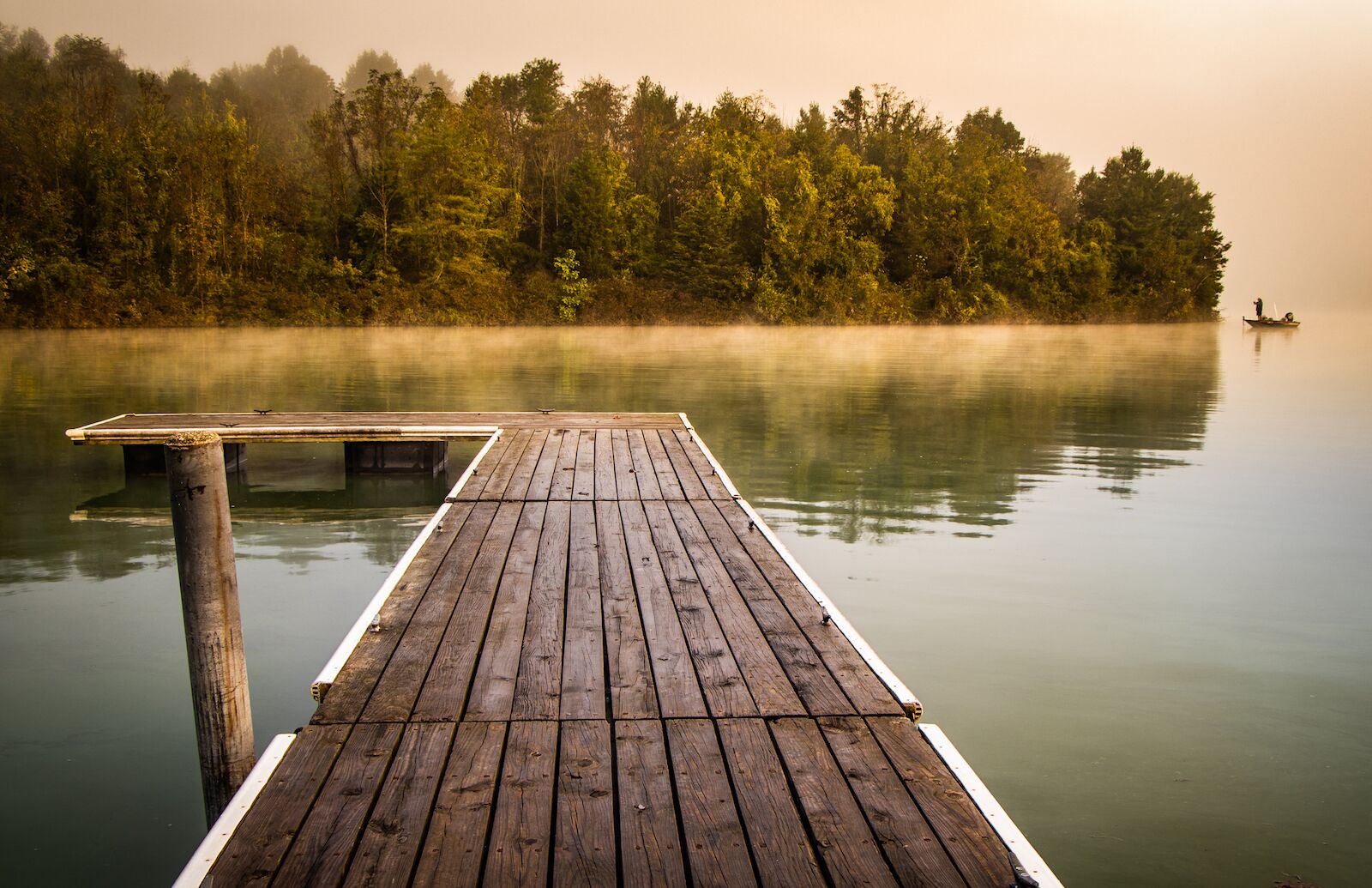 Blue Marsh National Recreation Area is like a mini-national park near Reading, complete with camping, distance trails, beaches, and more. And the highlight of the recreation area is, of course, Blue Marsh Lake, used for everything from paddling to fishing to birdwatching. It can get crowded, sure, but it can also be beautiful, as evidenced in the photo above.

Interestingly, the lake isn’t a natural wonder — it was created in 1978 by the U.S. Army Corps of Engineers to prevent area flooding. 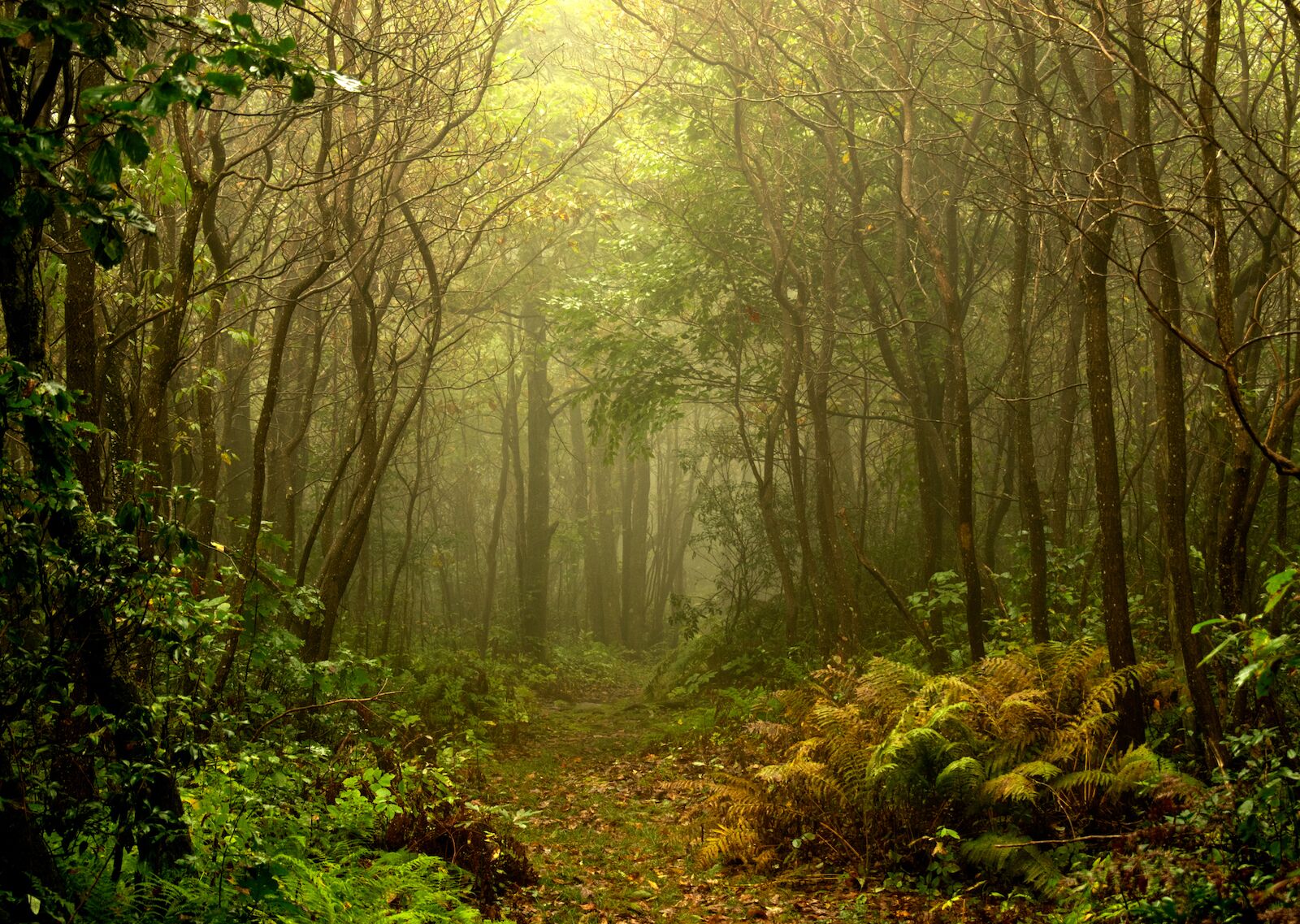 Yes, we know — that doesn’t look much like a natural spring. That’s because someone has vandalized the large rock outside the spring a few times, so in order to make it a little harder for people to find, we’re not including a photo (or a map). But there’s plenty of information about where it is online and, hopefully, you’ll find a bit of extra information about how to protect the spring while you’re reading about it, too.

Big Spring looks like something you’d find somewhere more tropical, with the turquoise blue water and lush greenery of a Mexican cenote. It’s more than 100 feet across with a sandy bottom, and if there’s anyone else there when you arrive, don’t be surprised if you see them going for a dip.

The spring is surrounded by the massive Forbes State Forest, but is actually on private land. So you’ll need to do your research and figure out how to legally visit before starting the hike. 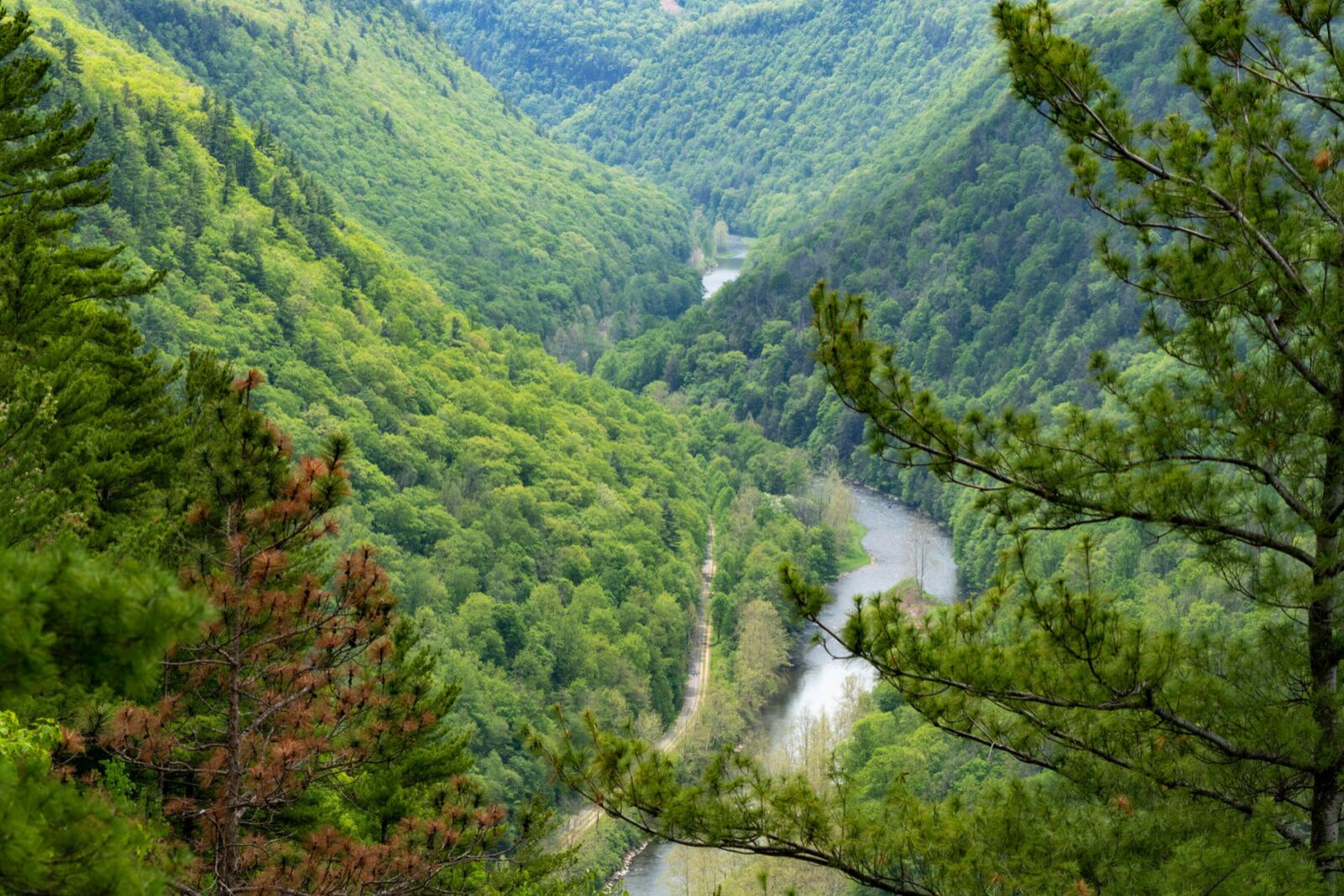 Welcome to the “Grand Canyon of Pennsylvania,” known as Pine Creek Gorge. It’s in north-central Pennsylvania and is 47 miles long, 1,450 feet deep, and home to a healthy population of bald eagles.

There are two state parks around the gorge that could themselves be considered some of the most beautiful places in Pennsylvania: Leonard Harrison State Park, and Colton Point State Park. Visitors from both parks have described the viewpoints over Pine Creek Gorge as “stunning,” “awe-inspiring,” and “sweeping.” Leonard Harrison State Park is a bit more developed if you prefer a park with amenities and a more interactive visitors center. 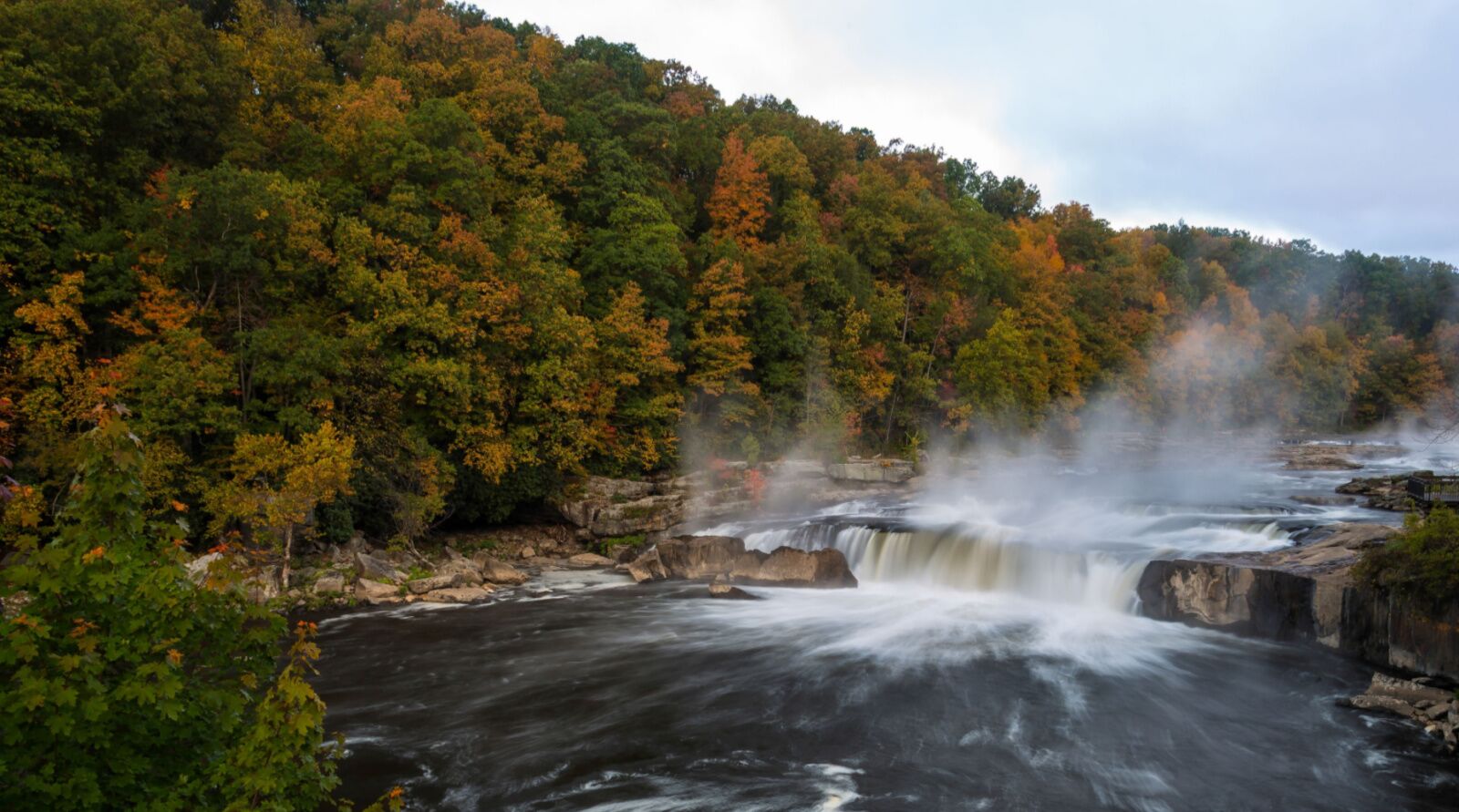 The Youghiogheny River Gorge is a stunning slice of Pennsylvania within Ohiopyle State Park. As you might imagine, rafting and kayaking are very popular on the river, and outfitters like White Water Adventurers and Ohiopyle Trading Post & River Tours run trips and offer rentals on the water.

However, it’s not just the stunning scenery along the Youghiogheny River Gorge that makes it one of the most beautiful places in Pennsylvania. It’s the many waterfalls along the river within Ohiopyle State Park. There’s the eponymous Ohiopyle Falls (pictured above), Cucumber Falls (likely the most photographed falls in the park), multi-tiered and branched Jonathan Run Falls, and 34-foot-tall Sugar Run Falls. And that’s not an exhaustive list.

Ohiopyle State Park is near Farmington in southwestern Pennsylvania, just north of the border between West Virginia, Maryland, and Pennsylvania. 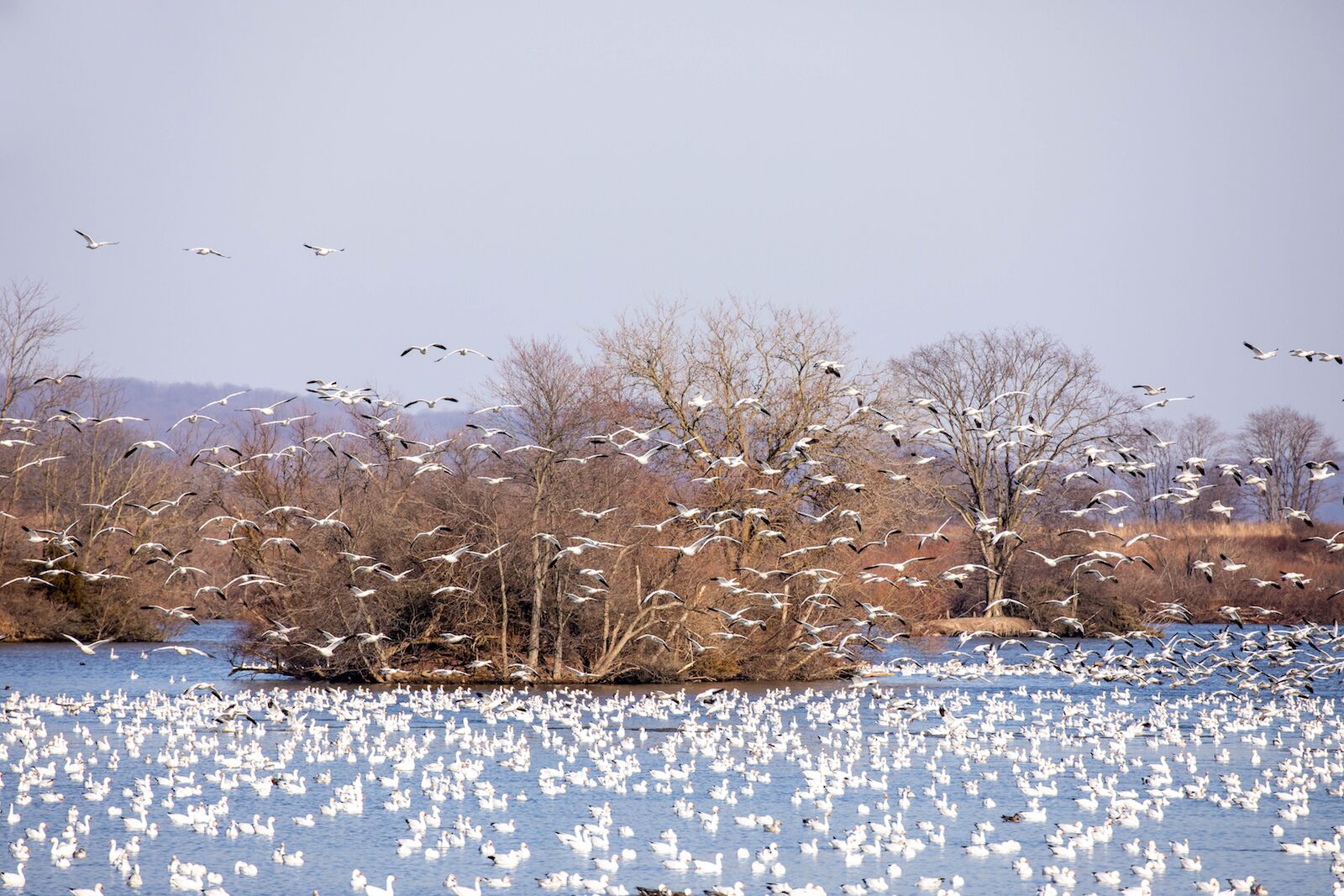 Say, do you like birds? How about thousands of snow-white birds taking to the sky at exactly the same time? That’s what happens every spring when stunning white birds migrate north, stopping at Middle Creek on the way. The birds are usually there in mid-March, though, of course, it varies from year to year. It’s a paradise for birdwatchers and photographers anxious to take shots of the enormous numbers of snow-white birds against the bright blue background of the lake.

If you time it right, you’ll certainly see birds — and lots of ’em. The park monitors the number of birds and shares reports on the prime days to visit annually. On any given year, the park expects approximately 100,000-120,000 snow geese, 10,000 Canadian geese, and 10,000 tundra swans to pass through the 6,000-acre nesting area. It’s one of the most beautiful places in Pennsylvania if you’re awed by natural wonders and wildlife. 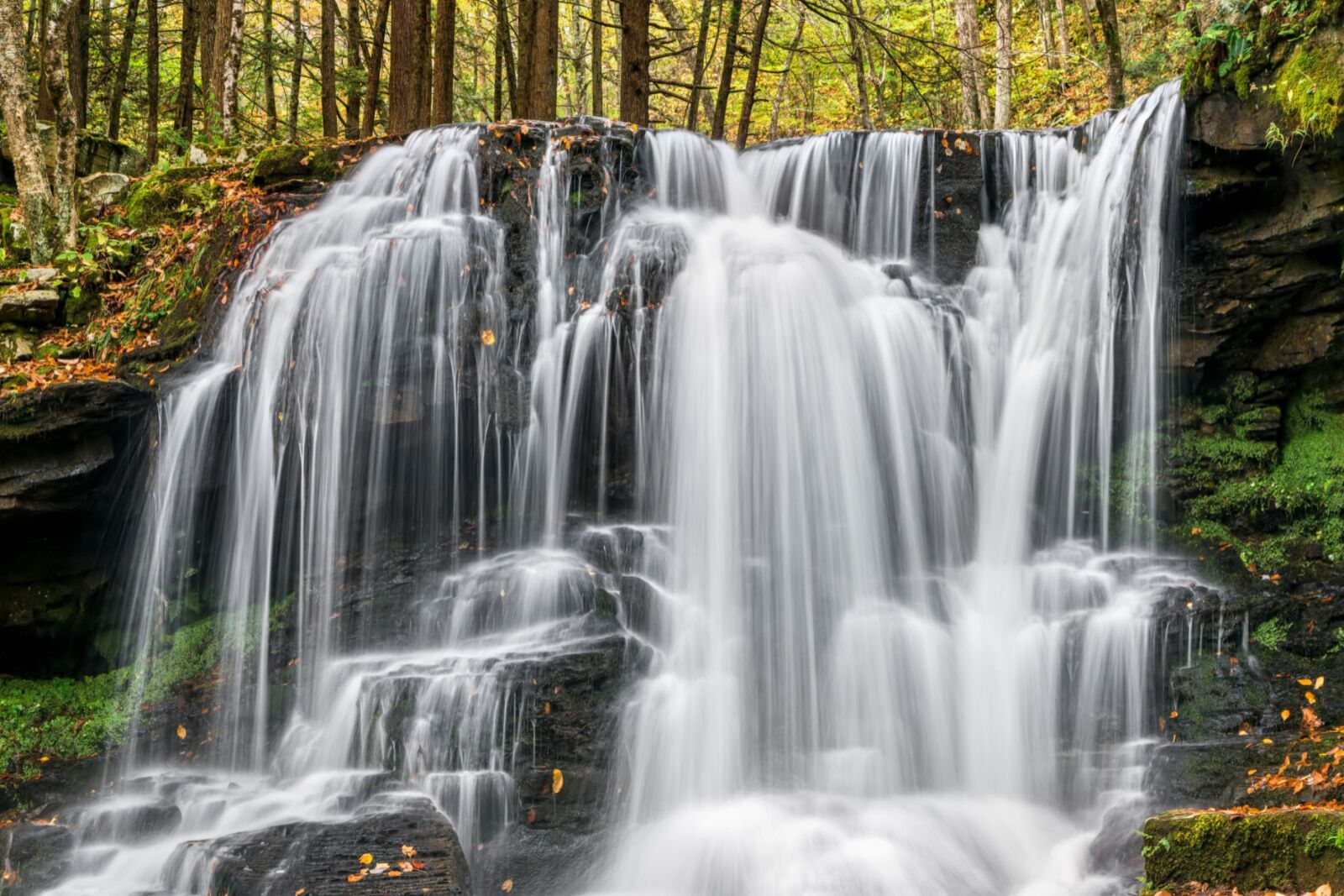 It’s impossible to narrow down which of the state’s many waterfalls should make a list of the most beautiful places in Pennsylvania. But fortunately, there’s no need to narrow down which waterfalls you visit if you head to Loyalsock State Forest, which has dozens of waterfalls in the northern part of the state’s Endless Mountains. You can’t make a wrong choice, but gorgeous options include 70-foot Angel Falls, which looks straight out of Costa Rica; Mills Creek Falls, popular for swimming; and Dutchman Falls, which looks like a mini-version of California’s famous multi-pronged Mossbrae Falls.

Galleries39 of the Most Breathtaking Natural Wonders in the World
Tagged
Outdoor Pennsylvania, United States
What did you think of this story?
Meh
Good
Awesome