By some estimates, there are as many as 6.5 million vegans in the United States. Vegan restaurants, shops, and vegan-friendly menu options have rose to the task to feed those with plant-based diets across the country. That said, the availability of good quality options for vegans vastly differs from city to city.

The people at WalletHub, a credit score report company, recently published a study evaluating how vegetarian- and vegan-friendly the 100 most populated cities in the US are. The research is based on 16 categories, including affordability, diversity, accessibility, and the quality of vegetarian and vegan food in each city.

Although some of these cities listed here are sure-fire entries you might have guessed would be in the top 10, there are a few that you might not expect to see. In descending order, here are the best cities in the US for vegans and vegetarians in 2021, along with where the city stands on key metrics compared to the 100 cities that were analyzed. 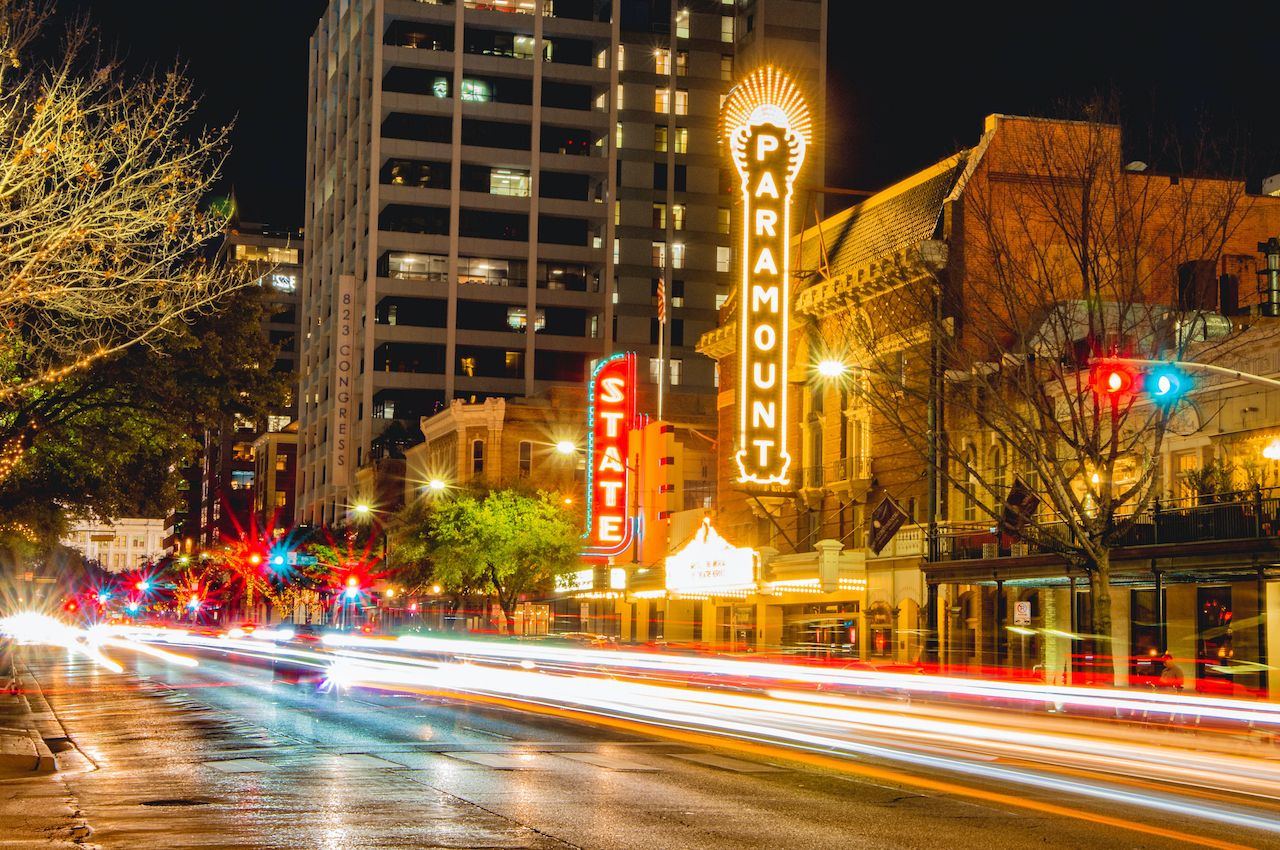 If you didn’t know about Austin, its location, right in the middle of Texas hill country, might make you doubt that a vibrant vegan or vegetarian scene could survive. But the city, which is home to some of the best BBQ and Tex Mex in the US, also has some of the most exciting vegan eateries, food trucks, pop-up markets, and even a grocery store. Austin caters to all and has a huge choice of menus featuring simple raw veg dishes to more indulgent vegan options.

If you’re into burgers, head to one of Arlo’s three food trucks around town. It’s well-known in Austin that Arlo’s burgers rival any meat alternative, and the vendor has made quite a name for themselves around the country. The Bac’n Cheeze Burger is a popular choice, as well as tater tots. There are options for gluten-free eaters, too. For Mexican food, head to The Vegan Nom, the city’s first all-vegan taco truck, and Lil’ Nonna’s for a plant-based pizza. 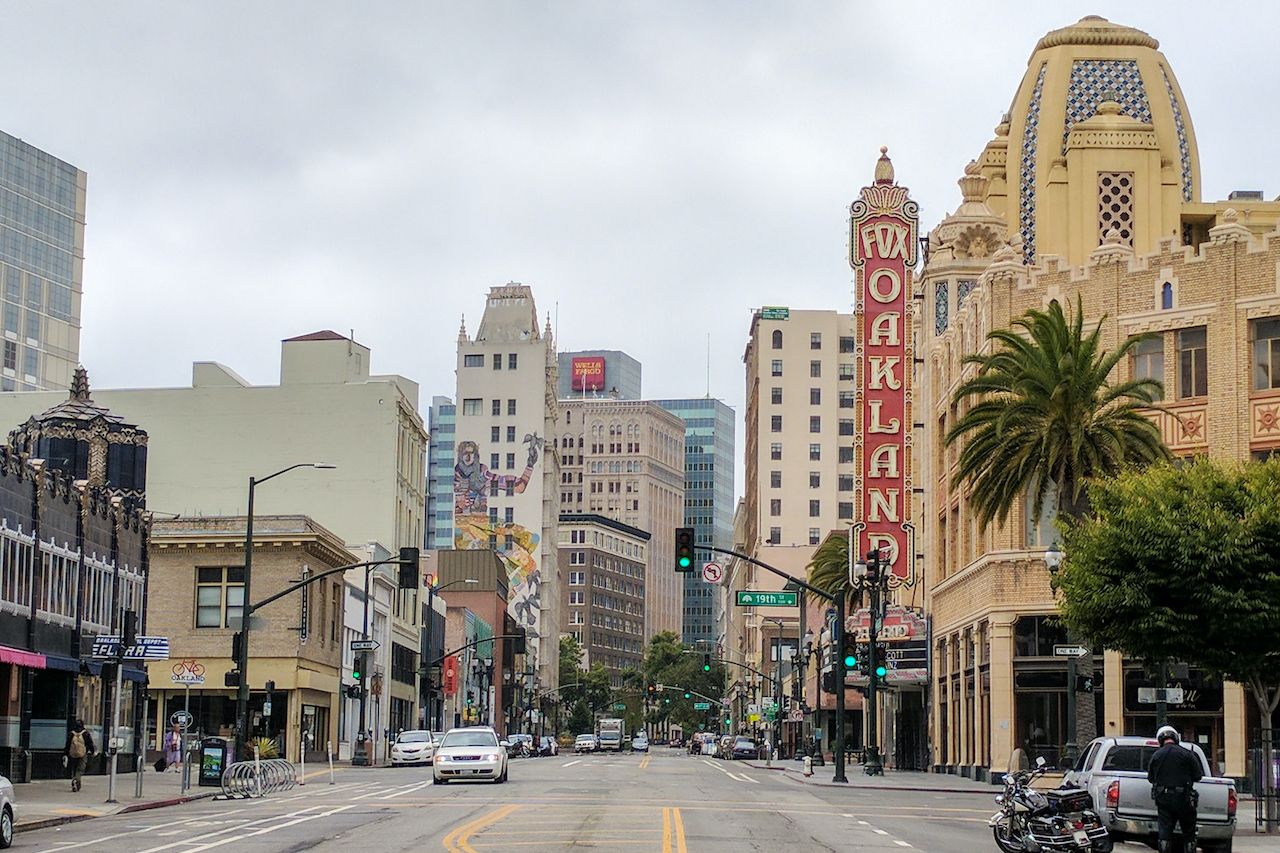 If you’re visiting Oakland as a vegan or vegetarian, you won’t be stuck with a boring side salad. The city has 100 percent plant-based restaurants as well as a nice range of menus that offer vegan options.

Millennium is somewhat of an institution in the Bay Area and has been crafting innovative vegan dishes for over 20 years. The restaurant draws on inspiration from around the world, but utilizes local farms and seasonal produce, and Millennium supports the community. Another Oakland staple is Shangri-la Vegan Restaurant which serves hearty dishes such as collard greens, baked yams, vegetable stews, and soups. 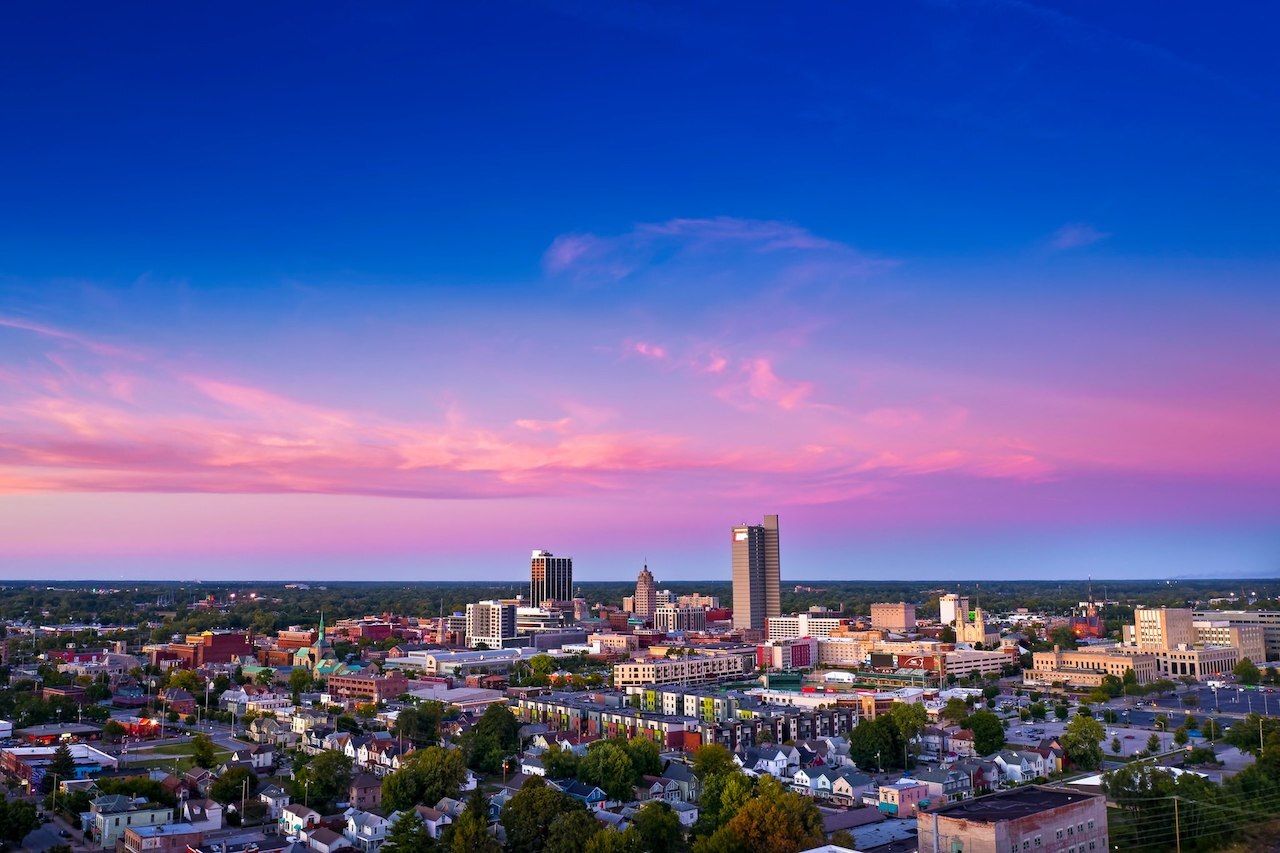 Fort Wayne was ranked number 45 in WalletHub’s 2018 version of this list, but it moved up considerably in the latest ranking. The city’s tourism board credits this to the demand from Fort Wayne residents who have been requesting eating options outside the city’s many steakhouses and burger joints. There are now two fully-vegan venues and a huge range of places that have made space on the menu for plant-based eaters.

The Loving Cafe serves up plant-based, pan-Asian inspired cuisine such as spring rolls and pad Thai. It also has a good selection of sandwiches and burgers. If you are looking for something a little more upmarket, there’s Bird and Cleaver. Although it’s not strictly vegan, the creative dishes such as the cheeseless Hillbilly Fondue and the KF Sea crispy tofu sandwich are worth a try. 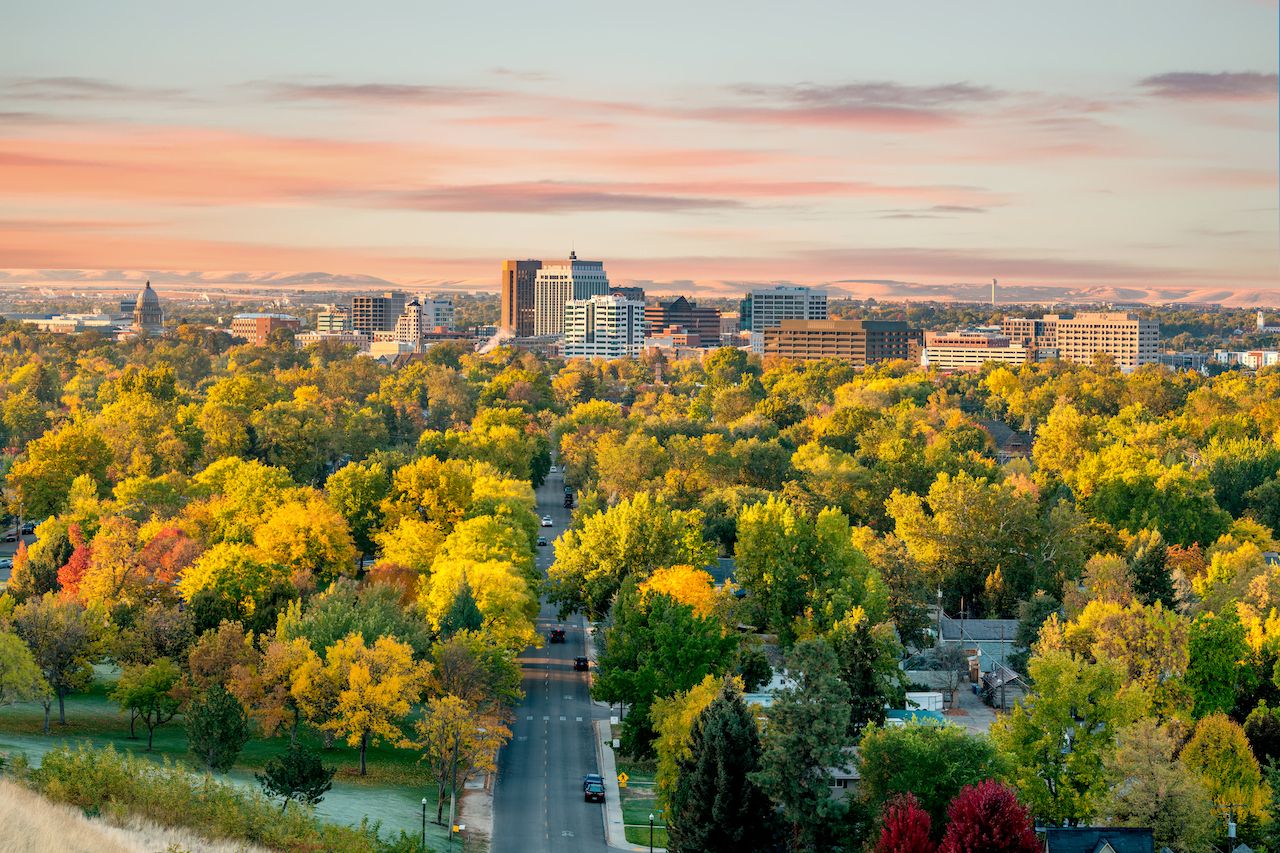 Boise, Idaho, jumped a whopping 40 places from 2018 largely due to its lifestyle rank moving from 70 to 26. There are a few dedicated vegan eateries in the city. A couple of note are High Note Cafe which is located in Downtown, and Cinnaholic, which is in Meridian.

Cinnaholic’s vegan create-your-own cinnamon rolls and its 20 different frosting flavors make this a popular dessert shop in town. For a savory dinner option, head to BBQ4LIFE, which, despite being a BBQ joint, has a whole vegan-friendly menu with dishes such as smoked tempeh sandwich, vegan nachos, spicy coleslaw, and beans. 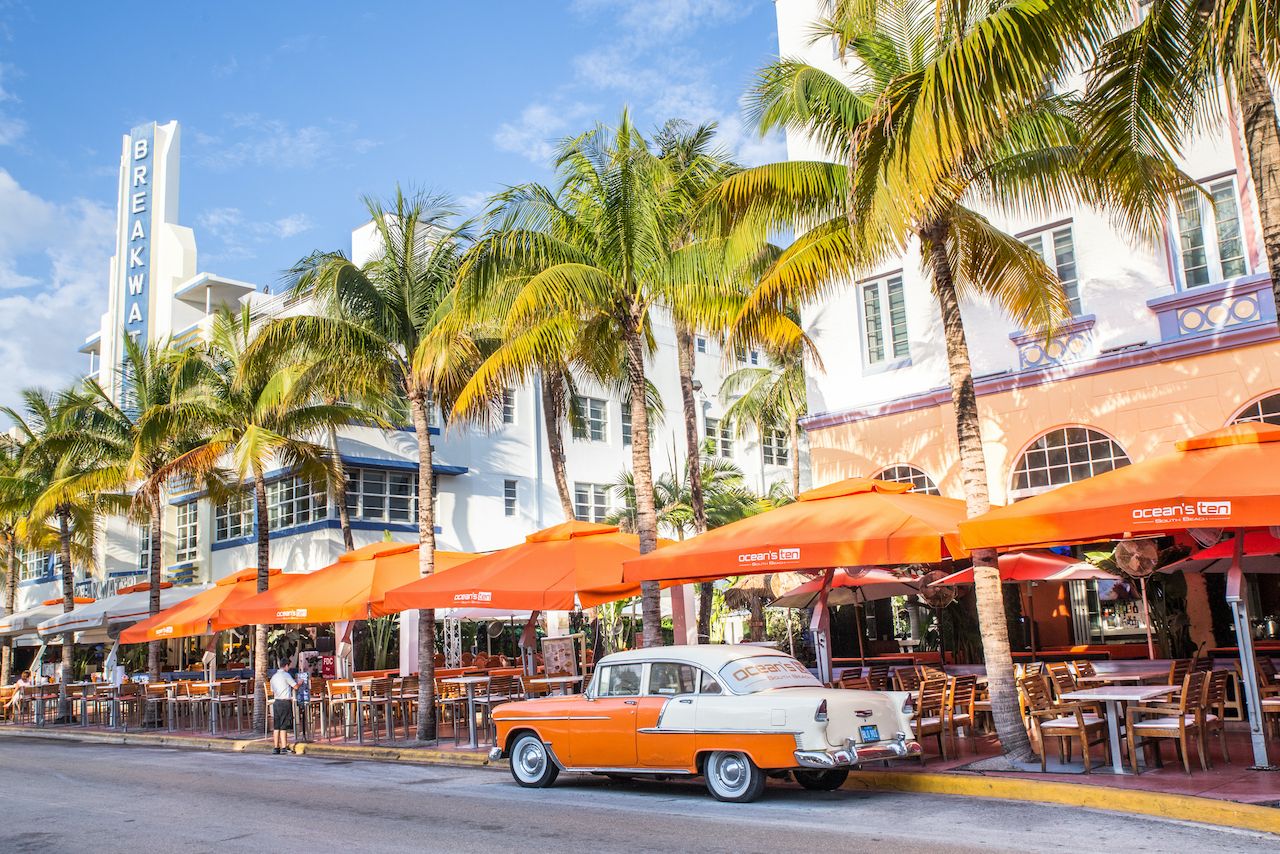 Miami doesn’t mess around when it comes to vegan and vegetarian food. The restaurant scene is buzzing with plant-based burgers and other options that are commonly weighed against some of the city’s most well-respected meat alternatives. You can find somewhere to eat in every neighborhood of Miami. Even if you have non-vegans joining you, they, too, will be impressed by the quality of produce and creativity of cookery.

Book in advance for Plant Miami, one of Miami’s more upscale dining options. Set in a tropical garden within a holistic wellness center, Plant Miami’s organic approach to vegetables is simple yet wholeheartedly elegant. If you are looking for something a little more casual, head over to the city’s branch of Planta and tuck into the vegan cheesy nachos or truffle pizza. 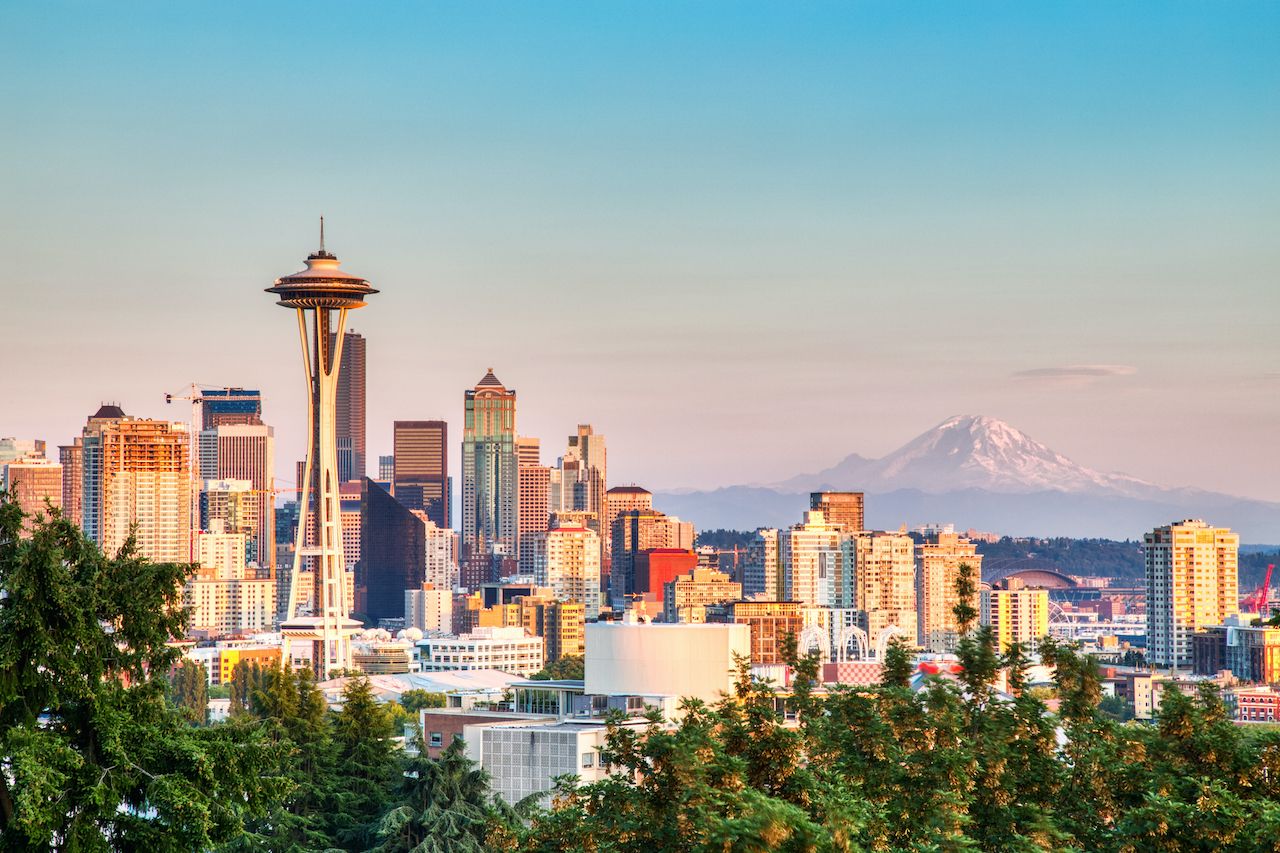 Seattle is a pioneer of Pacific Northwest cuisine. The local farmers and accomplished restauranteurs set a high standard, which goes for the plant-based dining options as well.

If you’re in need of ice cream, head to the multi-colored ice cream shop Frankie & Jo’s. The wide range of flavors are 100 percent vegan, and the ice cream shop launches a new seasonal flavor every Wednesday. Mighty-O-Donuts is another popular stop for a vegan sugar hit. It’s celebrated not only for being plant-based, but also for sourcing organic and sustainable ingredients. Try the lemon and poppyseed or French toast doughnut at multiple locations around the city. 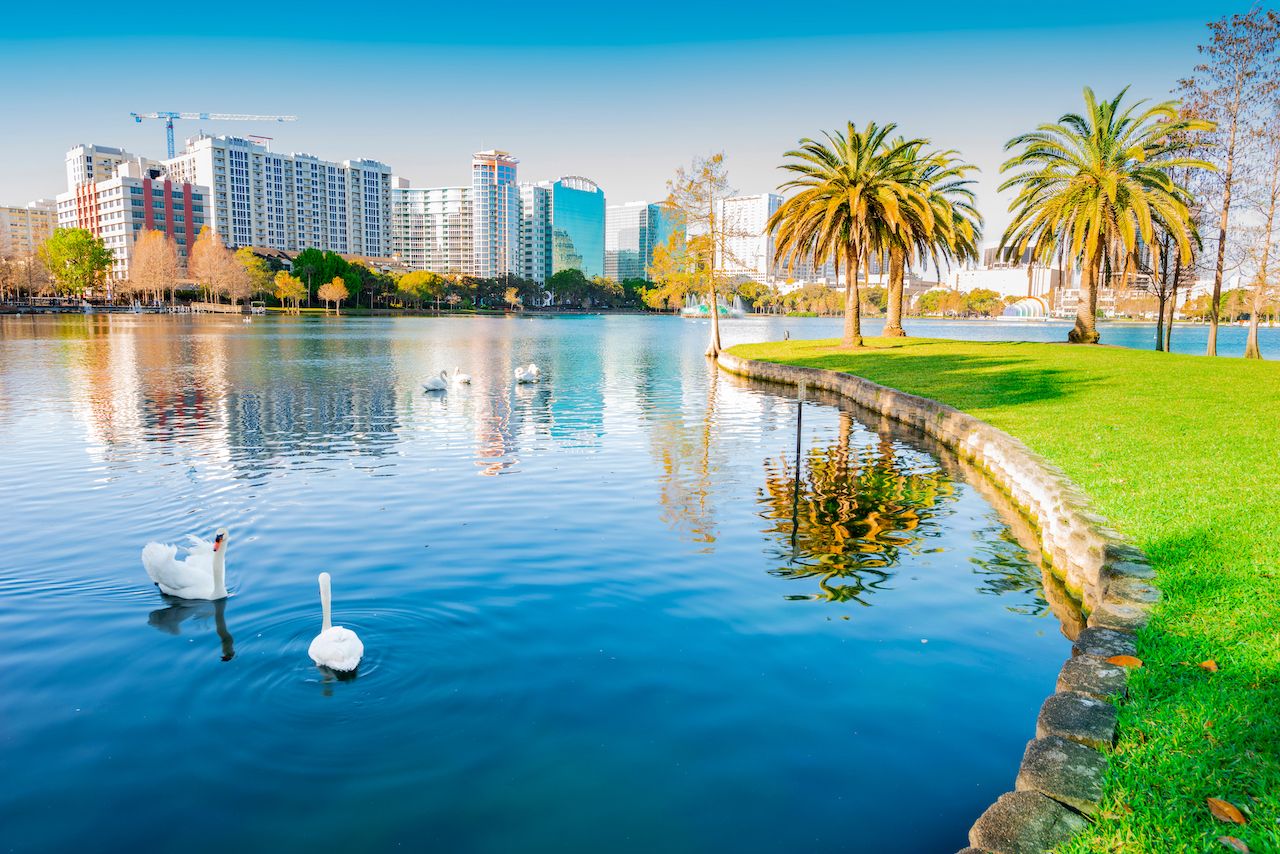 Orlando has a huge variety of vegan-friendly restaurants that might be welcome after a long day at Disney. In a similar vein to the theme parks that have amped up their vegan offerings, the city of Orlando has stepped up and you’ll find something for everyone.

One of the highlights of the vegan scene is Dharam Fine Vittles at Market on South. Go there for the sloppy Joes, baked mac and cheese, chili dogs, and pulled jackfruit. For Vietnamese food, head to Veggie Garden, which has a beautiful, plant-based menu (if you’re vegan, watch out for some dishes that contain egg). Don’t skip past the summer rolls or fried tofu soup. 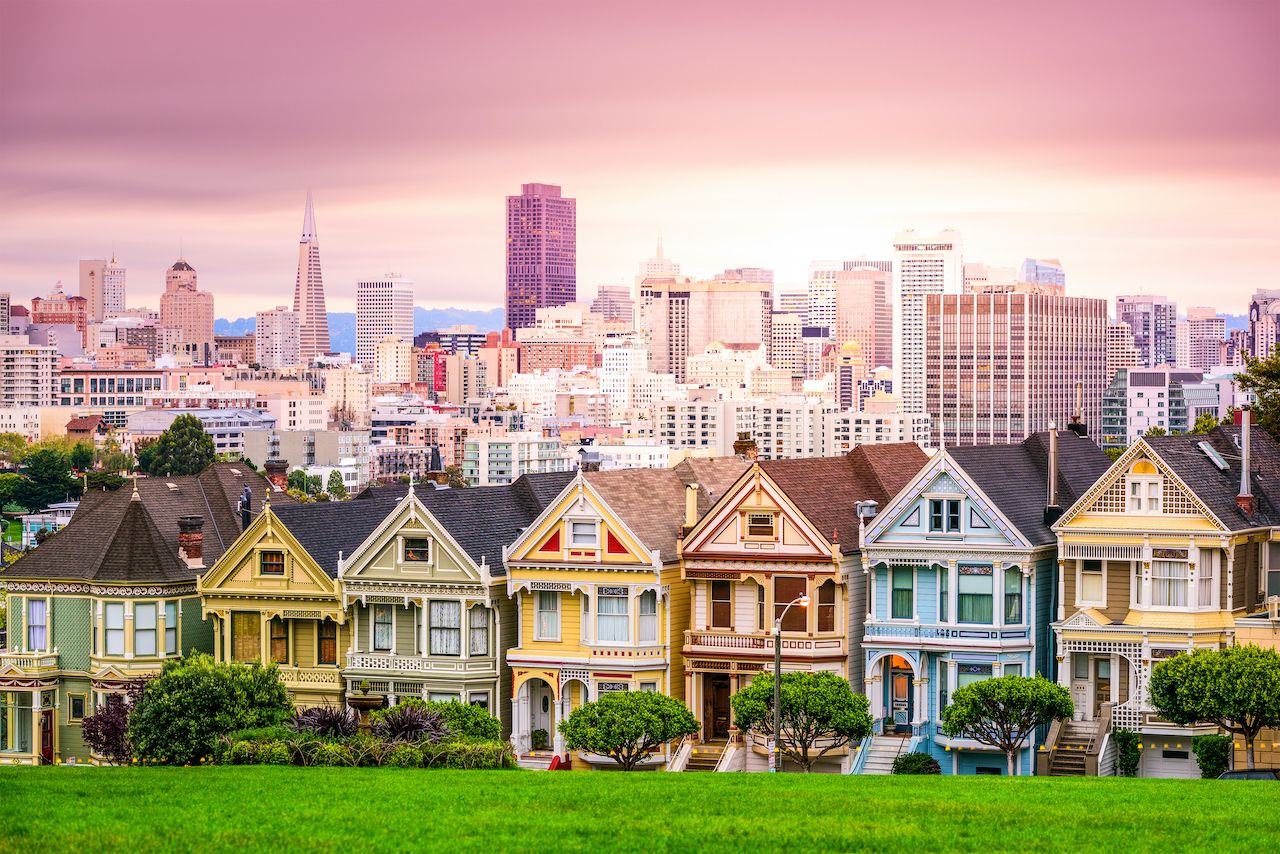 San Francisco is pricey, but the vegan restaurants here are top-notch, making the city one of the best places in the world for plant-based cuisine.

A local favorite is the organic Mexican joint Gracias Madre. Run by the owners of Cafe Gratitude, the kitchen uses ingredients from the restaurant’s own farm. The homemade tortillas and tamales alone are worth traveling to the city for. The menu is seasonal, which means the restaurant is consistently pushing its own creativity. Another popular spot is Adriano Paganini’s vegan restaurant Wildseed on Union Street. Dishes here are also based on local, seasonal ingredients. The Neatball Masala bowl with warm super grains, lentil, mushroom balls, and coconut masala is a stand out, and the Mexican corn cakes are the stuff of vegan dreams. 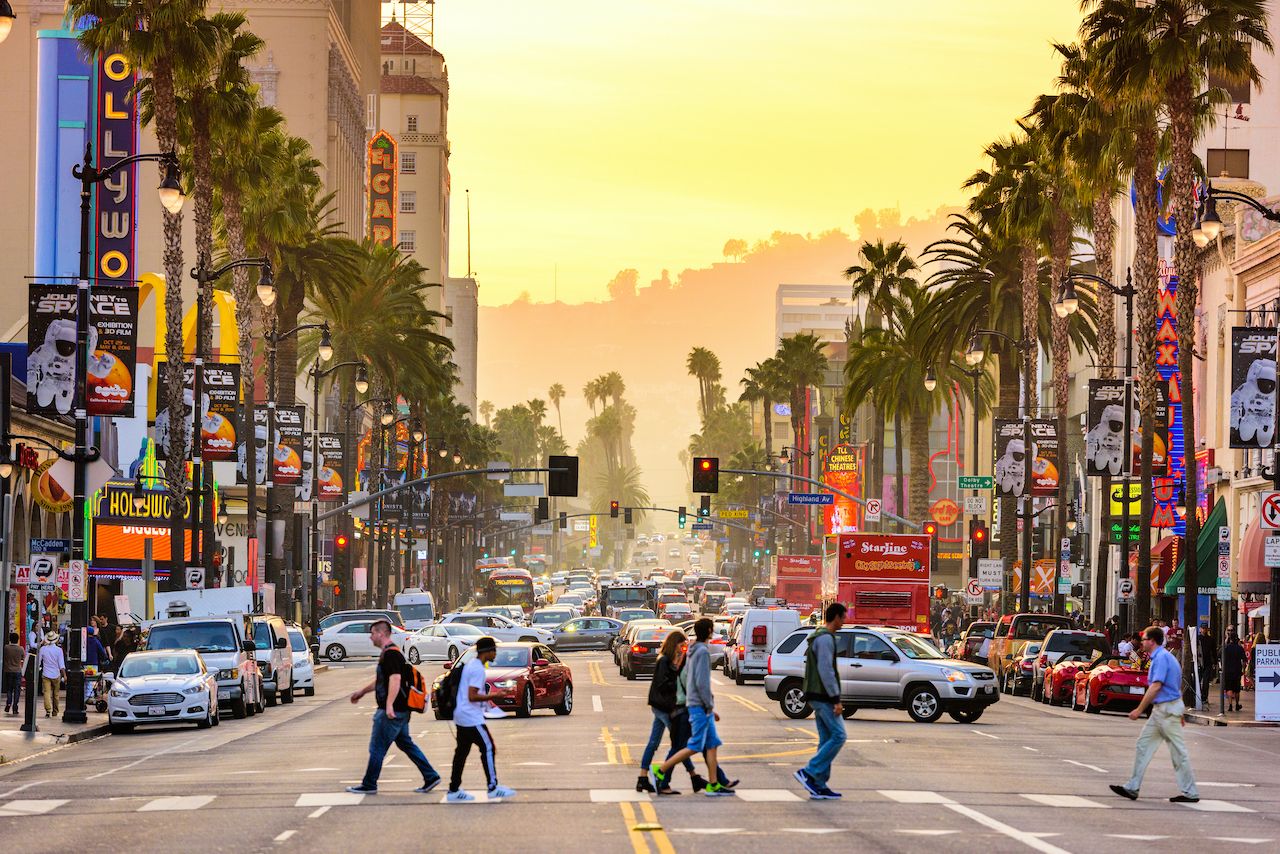 Los Angeles, ranked in sixth place in 2018, has climbed the charts to no big surprise. The health-conscious city has been at the forefront of wellness trends, but unlike many fads that ebb and flow in LA, veganism remains a popular and consistent lifestyle choice. Due to this, there are so many restaurants, cafes, and juice bars to choose from that you might find yourself a little lost. 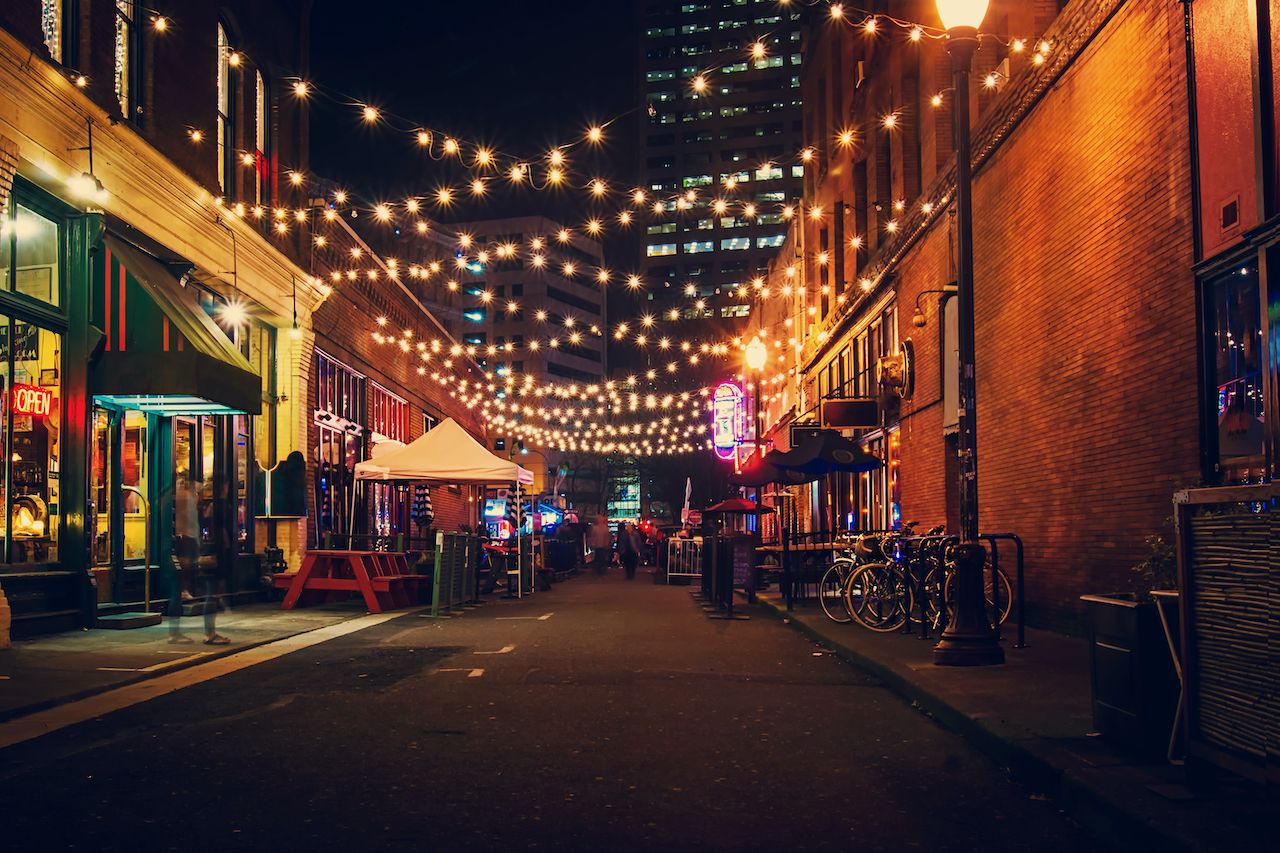 Portland has everything vegan diners could ask for: plant-based food trucks, markets, cool cafes, stylish restaurants, bakeries, you name it, the city has it. Famously known for celebrating non-conformity, Portland had a head start in the race to be the best city for vegans in the US. With almost 50 vegan eateries, annual food festivals, and many cruelty-free shopping options, it wouldn’t be a stretch to say that Portland challenges many international cities too.

The world is your eggplant here, but in a similar vein to LA, it can be hard to choose where to eat, especially if you are there for a short period of time. For something a little more refined and upmarket, there’s Farm Spirit, which prepares an outstanding nine- or 12-course tasting menu. For a light lunch or snack, go to the mostly raw restaurant Pixie Treat and indulge in one of the build-your-own bowls. Pastries and sweets are plentiful, but Petunias Pies and Pastries stands out for its delicious cupcakes, ice cream sundaes, and cookies. And if you’re looking for comfort food on the go, look out for the food truck institution Homegrown Smoker Vegan BBQ.

VegetarianHow To Order Vegetarian and Vegan in 20 Common Languages
Tagged
Restaurants + Bars Vegetarian Wellness United States
What did you think of this story?
Meh
Good
Awesome