in 2018, merida earned the title of the “best city to live in Mexico” in the United Nation’s City Prosperity Index, ranking it number one in quality of life, as well as other factors like cost of living and low crime. And let’s be honest: it also doesn’t hurt that it sits in a privileged location on the beautiful Yucatan Peninsula, surrounded by Mayan ruins, stunning jungle and access to nature, and never-crowded, white-sand beaches.

Merida, Mexico, is a picturesque colonial city and the capital of Yucatan State in southeast Mexico. It’s an incredible destination to visit, full of history, culture, art, and small family-run restaurants (called fondas) that serve up exquisite Yucatan cuisine (much of which is a modern-day version of Mayan dishes).

But, without a doubt, you can’t say you’ve been to Merida if you haven’t swum in one of the surrounding cenotes and visited one of the best Merida, Mexico beaches, all of which are just a short drive away. You could fill several weeks with exploring the area’s destinations, so to make it a bit easier, scope the list below of the best Merida, Mexico beaches and cenotes you’ll definitely want to plan to visit.

Merida isn’t technically on the beach, since it’s about 30 minutes to the coast. But that makes the town less crowded and more affordable — and really, what’s a 30-minute drive for beaches like these? The best Merida beaches are as beautiful as those of Cancun and the Riviera Maya, but have none of the crowds. In fact, on their stretches of soft white sand, you won’t find too many foreign tourists, but rather, locals fishing or relaxing with families and friends on the sand. Don’t expect to find big resorts, spas, or five-star restaurants. These Merida beaches are semi-pristine, with authentic, laid-back Yucatan vibes. 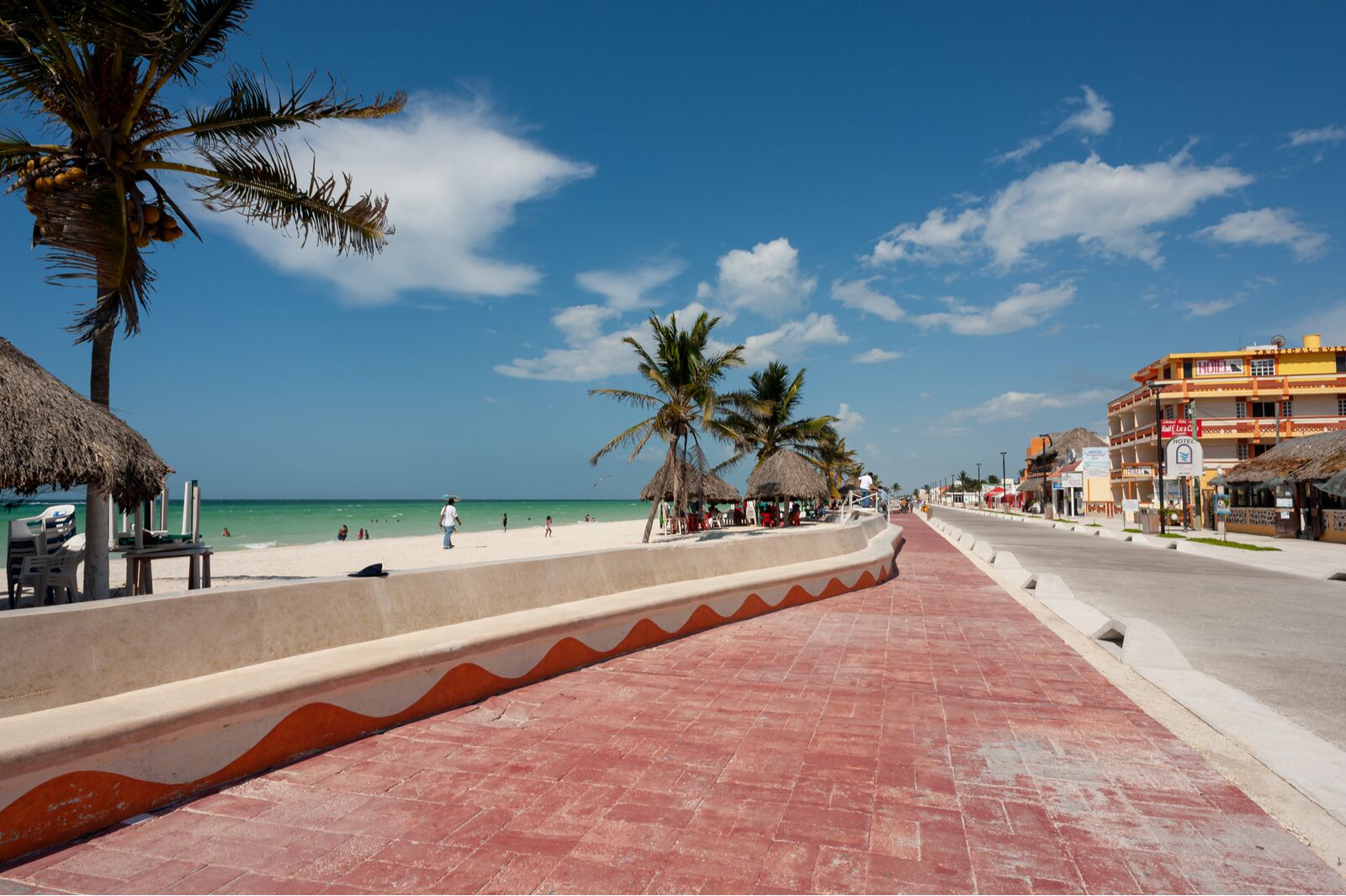 Known to locals simply as Progreso, this is the closest beach to Merida. It’s where many locals have weekend homes and small boats, and it is where the city’s young people go for beach parties on the weekends.

Progreso’s beach is tranquil and enjoyable during most of the year. However, if you want to avoid crowds, don’t come during summer vacations or Easter week as that’s when the port is packed, especially with locals from other towns enjoying time away from school and work. Progreso is home to the world’s longest pier (it’s four miles long), which keeps freighter ships far off shore, and thus the water near the shore very clean.

One of the other reasons Progreso is one of the best beaches near Merida, Mexico is that it’s home to the ecological reserve of El Corchito. The large area has cenotes, boat tours of the mangroves, and opportunities to see native flora and fauna.

Just five miles from Progreso is the port of Chicxulub, famous for being the place where the massive dinosaur-killing Chicxulub crater landed around 65 million years ago. Unfortunately, the Chicxulub crater is no longer visible, but travelers can visit the Chicxulub Crater Science Museum if they’re interested in learning more about the area’s ancient history.

It can be a bit hard to notice when you’re in Chicxulub since there’s no break in development between Chicxulub and Progreso. But look out for a sign. Otherwise, you may not even notice when you’ve arrived. The beach at Chicxulubis just as beautiful as the rest of the area, with white sand and calm, clear water. Most residents in this beach near Merida are primarily anglers by trade, so this is one the best beaches in Merida for seafood. There are restaurants for all tastes, with many options for street food serving antojitos (small snacks with corn or cheese filling) and cochinita pibil (BBQ pork).

Many people choose to spend a night in Chicxulub to make it easy to visit other nearby beaches like Chelem and Chuburna. Hotels and rentals are fairly inexpensive, and it’s not unusual to see flamingos walking on the shore if you wake up for a morning beach walk. 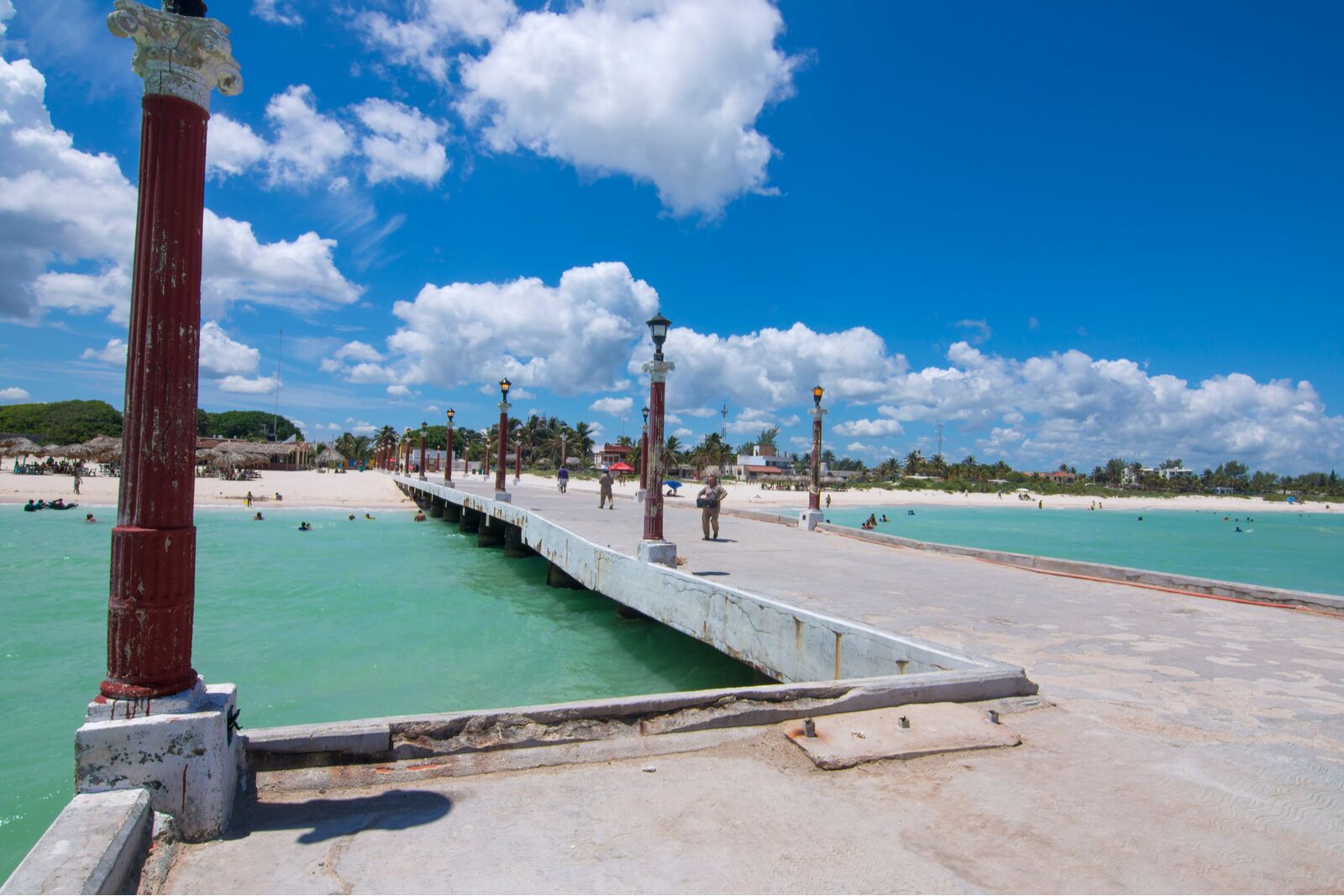 Just about an hour away is one of the best beaches near Merida for a laid-back day or overnight trip: Sisal. It was the first commercial port on the Yucatan Peninsula and the place from which locals used to export products like cotton, tobacco, and “henequen.” which can be made into rope and various textiles. It was called “green gold,” thanks to the economic impact its production had on the area during the 19th century.
Today, Sisal is a quiet fishing village with a beautiful beach of turquoise blue waters and several attractions, such as an old fort, an ecological reserve, mangroves with springs, cenotes, flamingo viewpoints, and small restaurants with cozy palapas serving all kinds of family recipe seafood dishes.

Cenotes are unique to the Yucatan Peninsula. They’re essentially sinkholes, fed by aquifers (and rain). Cenotes are generally cooler than the ocean at an average temperature of about 75 F (24 C).The water is very clear and bright blue, and they’re usually surrounded by jungle — pretty stunning stuff.

These natural pools owe their name to the Mayans, who called them dz’onot. The pronunciation sounds like a bit like the word “centore” — the “dz” sound is a bit like a “ch” sound, so “dz’onot” sounds like a bit like “chnote” when properly pronounced. And “cenote” (which Americans generally pronounce as “suh-no-tay”) is the Americanized version of that. The ancient Mayans had a strong connection with the cenotes both as a water source and potential connection to the underworld. Divers and archeologists have found jade, copper, gold, and even textiles left as offerings.

Besides stunning jungle locales and clear water, the cenotes have stalactite formation formed by water droplets that slowly dissolve the limestone rock over time. On average, it takes between 4,000 and 5,000 years for a stalagmite to grow one inch. Current estimates proposed around 3,000 cenotes throughout the Yucatan Peninsula. Some are open to the public and have amenities like snorkel rentals and restrooms, while others are on private property or undeveloped in the middle of the jungle. They’re all amazing to visit, but be sure not to use sunscreen or bug spray around the cenotes as the chemicals are quite damaging to the land and water.

The Yucatan Peninsula is full of ancient pre-Hispanic settlements and Dzibilchaltun is the closest archaeological site to Merida. It’s one of the oldest Mayan cities and currently is home to the pre-Hispanic city, an eco-archaeological park (where you’ll find Xlacah cenote), and the Museum of the Mayan People.

The Xlacah cenote is 320 feet wide and 147 feet deep, making it one of the largest and deepest cenotes in the Yucatan. This cenote is entirely open-air and is at ground level, so it’s easy to access. An excellent plan is to visit the archaeological site before cooling down with a dip in the cenote. 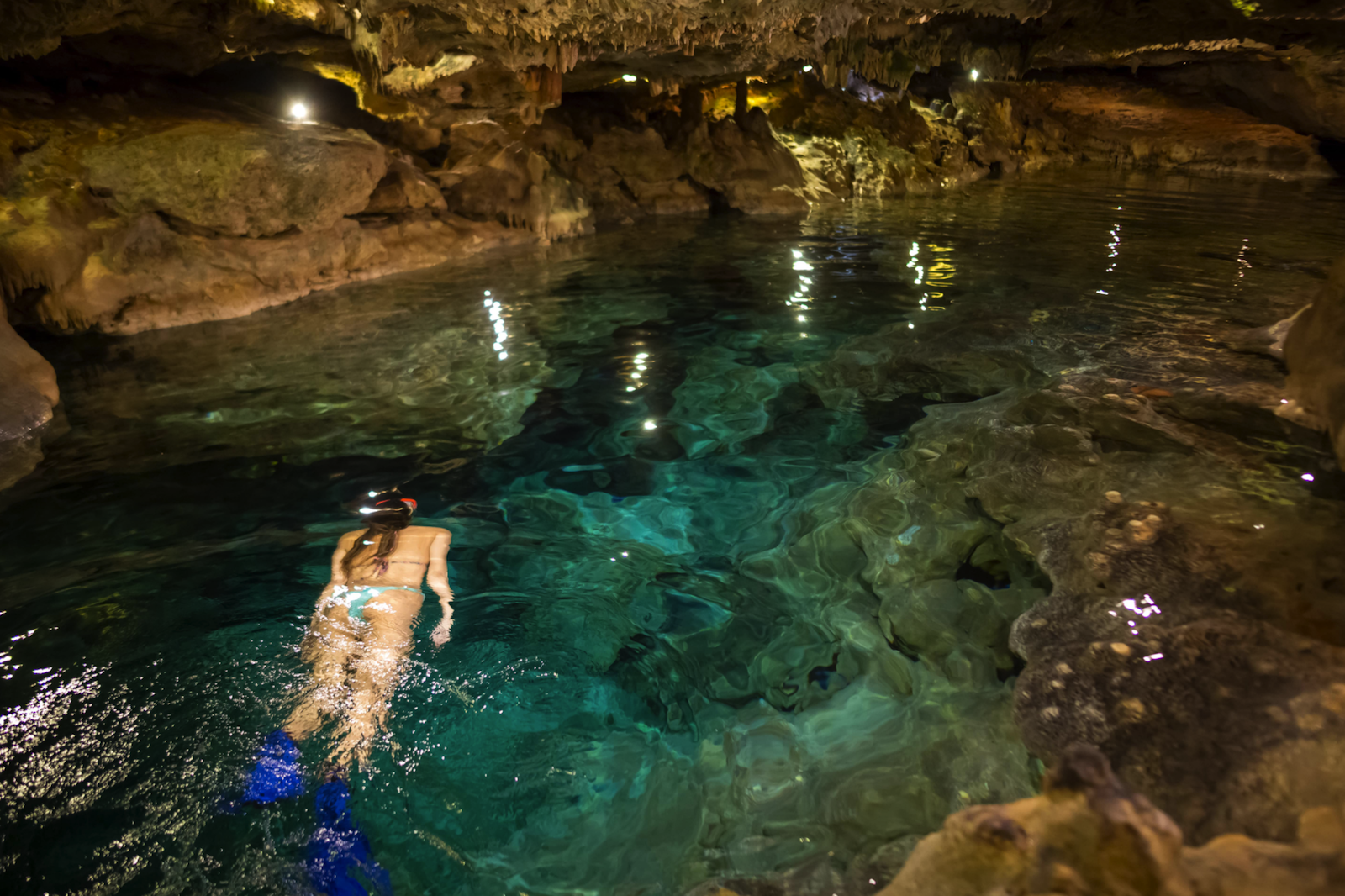 Just a quick half-hour from Merida, in the town of Chochola, is Cenote San Ignacio, one of the best cenotes in the area. Like Xlacah, it has clear turquoise water, but unlike Xlacah, this cenote is inside a cave. Wooden stairs make access easy, and since it’s fairly shallow, it’s a good place to snorkel and see the marine life near the cenote floor.

San Ignacio is an ecotourism center with a restaurant serving regional specialties, bathroom and changing rooms, hammock gardens, and even overnight cabins. It’s also one of the few cenotes you can visit at night, which is a more romantic (and spooky) atmosphere.

While it’s not a cenote in Merida, it’s easy enough for a quick morning trip. The incredible Hacienda Mucuyche dates to the 17th century and is almost entirely original with minimal restoration. On the grounds of the hacienda are two fascinating cenotes connected by a canal.

To keep the cenotes in an optimal condition and reduce damage from too many tourists, the only way to swim in the cenotes is on a guided tour that runs approximately two hours. The tour is fantastic, leading guests past unique landscapes that combine the emerald waters of the cenotes with vegetation, hanging roots, rock formations, and caves.

At the end of the tour, you can stay and enjoy the hacienda’s facilities, jump in the pool, or have lunch at the on-site restaurant.

Cuzama and Homun are two towns close to Merida, and both are mainly known as the starting points for tours to cenotes as there are about 15 in the area. Some are underground with no natural light while others are semi-open with a few rays of sunlight that reflect in the area. Others are completely uncovered.

Many locals in Cuzama and Homun make a living from taking tourists to the cenotes and have well-organized tours that include transportation to a few different cenotes. It’s best to let locals take you as they likely know the cenote owners and know the history — and legends — of the various sites. If you can tear yourself away from the best beaches in Merida to visit the best cenotes in Merida, this is the place. They’re all beautiful in their own way, but some top choices include Cenote Canunchen, which has a natural skylight that lights up the cave; the tiny, private-pool-feeling Pool Cocom Cenote; or the Tres Oches cenotes, with plenty of places to jump into the water from nearly 15 feet above.

Tagged
Beaches and Islands Outdoor Mexico
What did you think of this story?
Meh
Good
Awesome