Visitation to America’s national parks isn’t expected to slow down anytime soon. Crowds will flock to the iconic sites like Half Dome, Going to the Sun Road, and the West Rim of the Grand Canyon, but there’s a secret that flows through them—many of our most famous national parks are great places for rafting. From the Appalachians to the Rockies, and many places in-between, find the park that piques your interest, and experience America’s “Best Idea” while floating down a river. 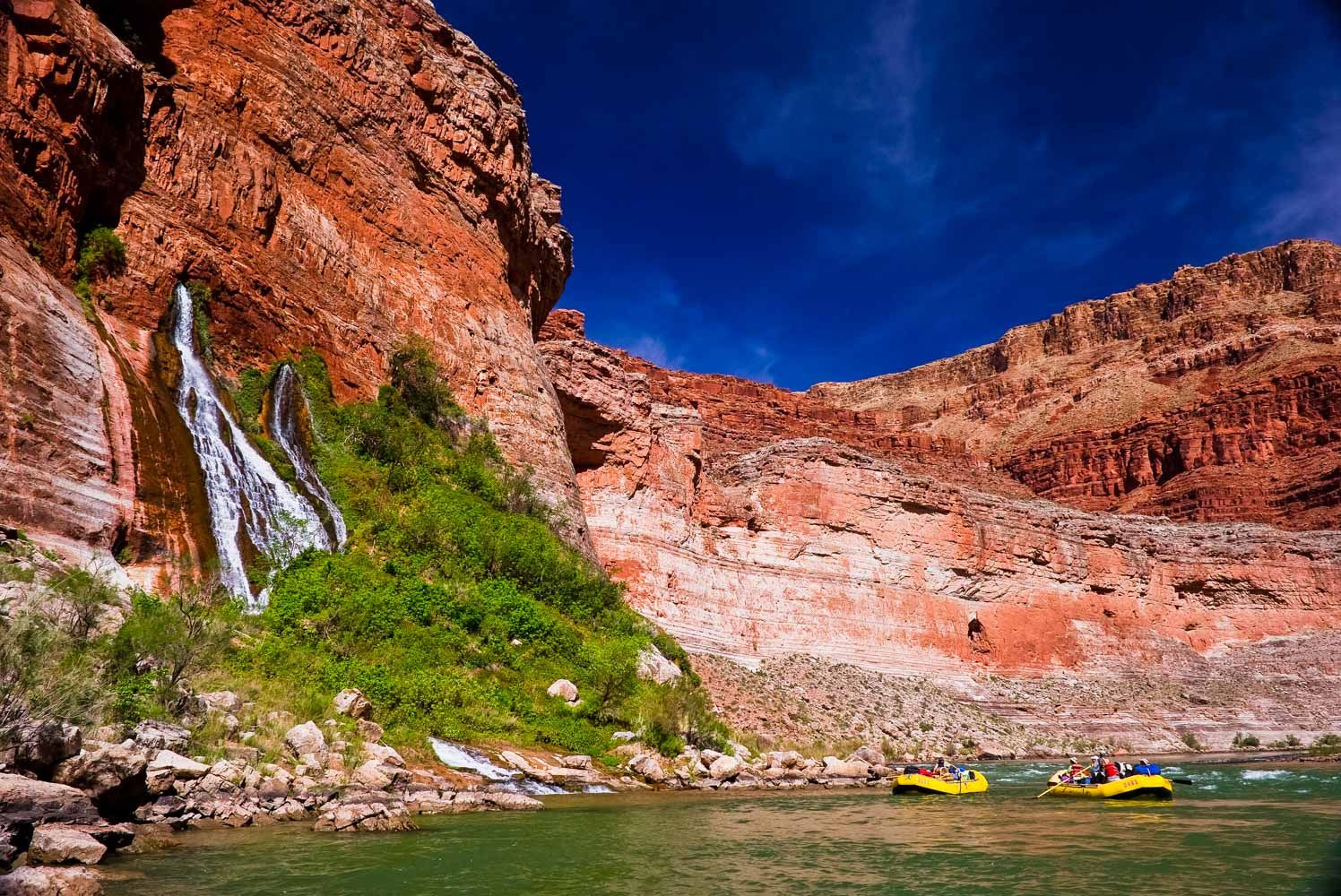 Grand Canyon rafting is the Holy Grail of whitewater trips inside of our national parks. Once you push off from the bank, you kiss civilization good-bye and travel through a geologic storybook that reveals the beginnings of time, not to mention some of the most notorious rapids in North America. But it’s not just the epic whitewater that makes the 280-mile trip from Lake Powell to Lake Mead a once-in-a-lifetime journey. The canyon is a treasure trove of cool historical sites, mind-blowing geology, and unforgettable side hikes that will leave a lasting impression.

The Middle Fork of the Flathead River forms an emerald ribbon along the southern boundary of Glacier National Park. Its headwaters originate from glaciers high in the mountains above, making for one of the coldest whitewater runs in the country. The most popular stretch of river threads a narrow valley between towering mountains, and is easily accessible along Route 2 for a fun-filled day trip. The more adventurous types can charter a bush plane and fly deep into the Bob Marshall Wilderness for a multi-day trip that ends at Glacier National Park. Either way, you’re guaranteed a wild time, beautiful scenery, and electric green water that’ll take your breath away. 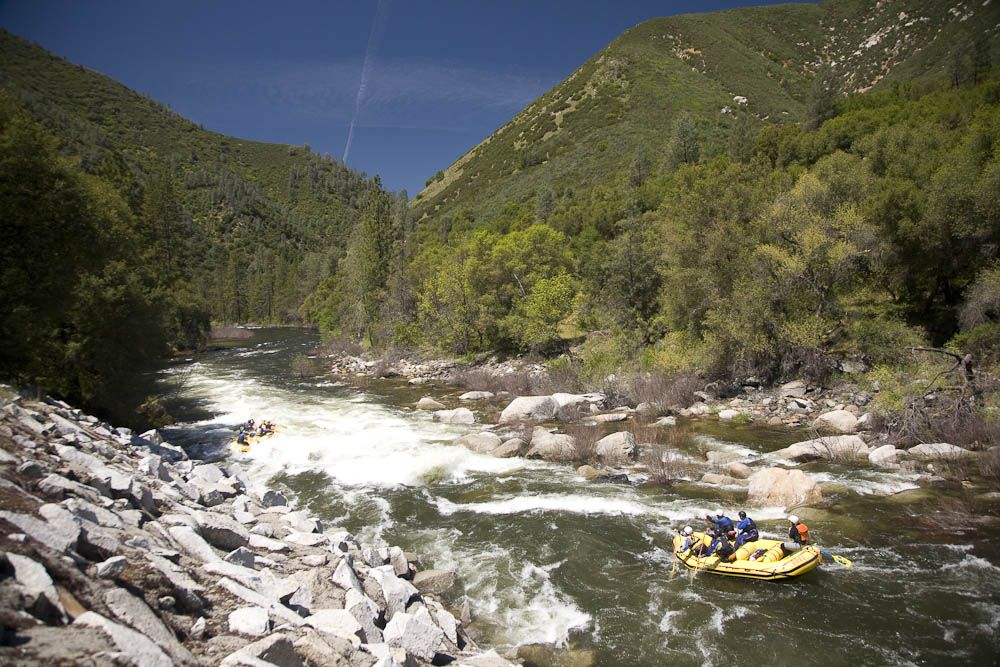 The Merced River loops through the heart of Yosemite Valley beneath the iconic features of Half Dome and El Capitan. Once the river leaves Yosemite National Park, however, it becomes a hard-charger that flows through a rugged canyon with twisted oak and pine. It’s an exhilarating springtime run with Class IV rapids, but it mellows out by mid-summer, and is suitable for anyone who wants a taste of wild California. Any time you choose, Merced River rafting packs a punch and is the perfect escape from the tourist chaos of mid-summer in “The Valley.”

The Noatak River drains the mighty, snow-clad Brooks Range and wanders through the tundra of the North Slope. It’s the largest undisturbed watershed in North America, and if you can’t find enough solitude on a month-long trip down it, you might as well enlist on the next shuttle to Mars. You may pass traditional Inuit villages flourishing with ancient customs, and you will certainly witness wild animals governed by the same rules since time immemorial. If you have floated most of the big runs in the U.S., and if you are looking for something different, then hop on a bush plane and fly out to where the sun never sets. You will never regret it. 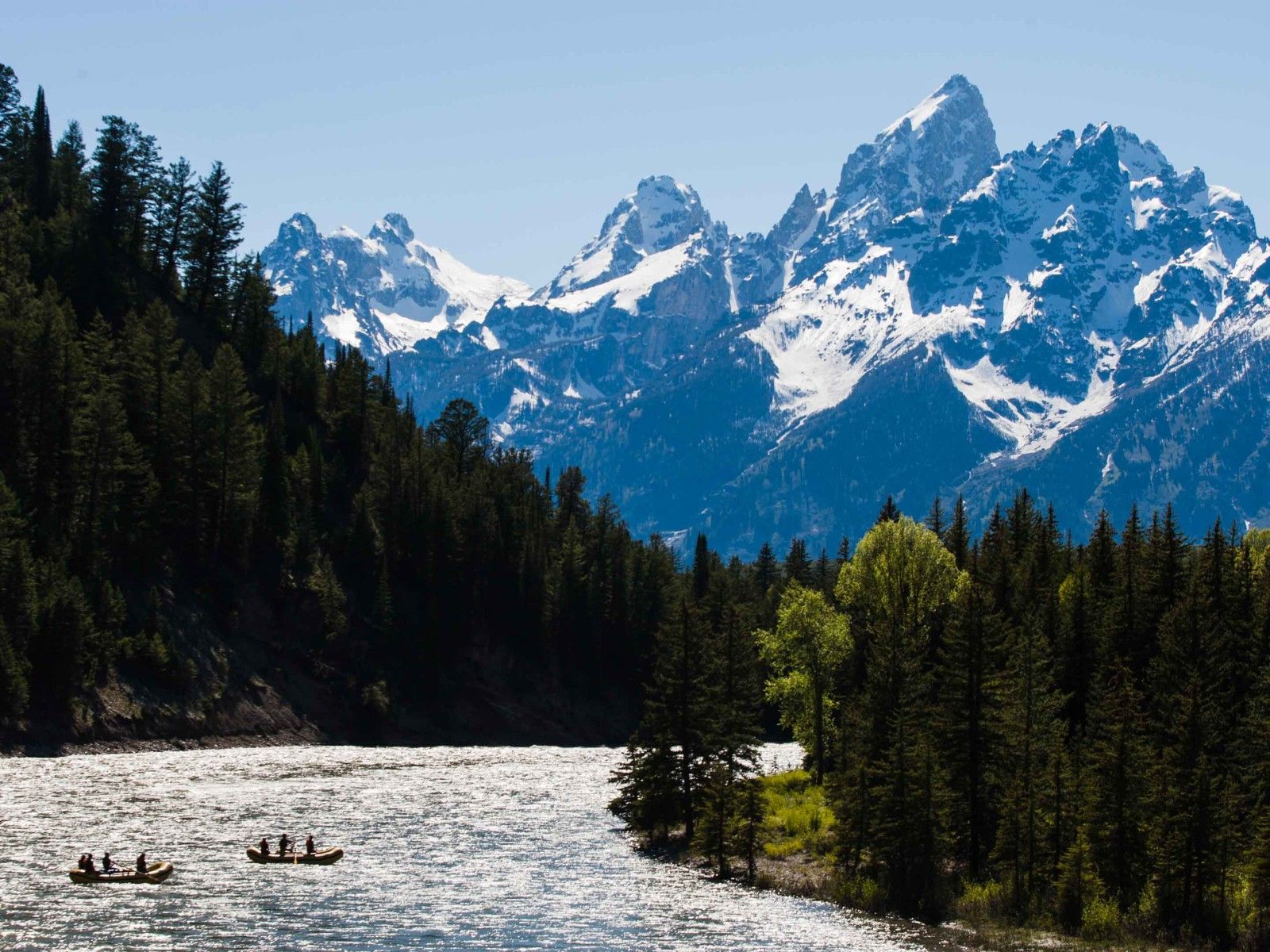 The Tetons look the way a kid imagines mountains should. A jagged saw blade in silhouette, and the lack of foothills expose every foot of their prominence. There’s no better vantage of the Tetons than from the Snake River. A mellow stretch flows directly through the national park, which offers a great opportunity to spot wildlife like elk and moose. A whitewater stretch outside the park serves up the excitement for those who want a thrill. Either way, a trip down the Snake harkens you back to the Wild West.

Texas is not synonymous with rafting, but in Big Bend National Park, the Lone Star State delivers. Let the Rio Grande be your guide as it carries you into canyons over 1,500-feet high. You’ll be floating along the international boundary, and in river bends you’ll spy the colorful mesas of Mexico. Many visitors report not seeing another soul along their entire trip, unless you count the turtles, kingfishers, and beavers swimming past. The Lower Canyons is the stretch for you if you want challenging whitewater, remote river camps, and a bright night sky filled with endless stars. 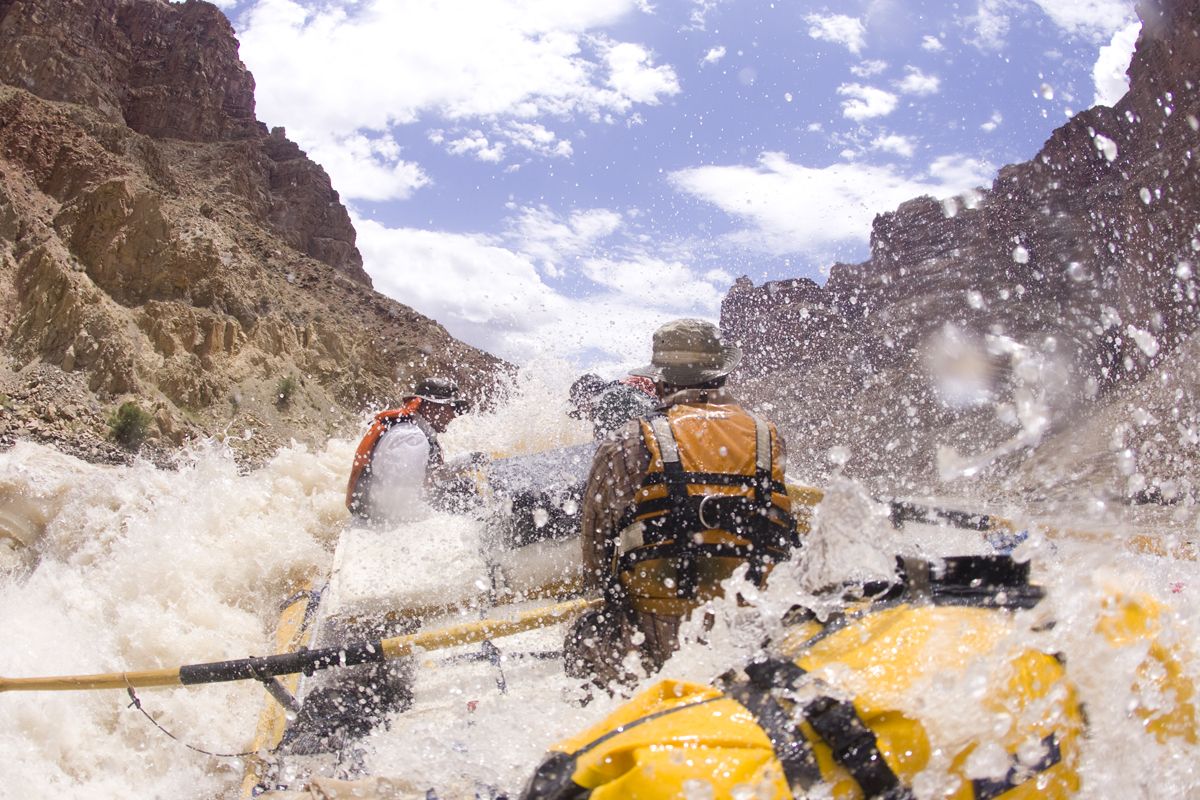 Canyonlands National Park is 527 square miles of what Edward Abbey once called “the most weird, wonderful, and magical place on earth.” The Green and Colorado Rivers bisect the heart of this sandstone canyon country. Each present a unique way to explore the far-flung reaches of this parched landscape, but in the late spring, an undeniable magic roars to life after the confluence of the two rivers. It’s known as Cataract Canyon, and it’s home to some of the largest rapids in North America. They are sure to make your heart pound and your palms sweat, but the entire trip will have you nodding your head in agreement with old Mr. Abbey.

The North Cascades is more renowned for glaciated peaks than rivers, but all that snow has to go somewhere, and in the summer, the Skagit River receives the alpine’s bounty. Direct from the glaciers above, the water is a strikingly cold emerald torrent that features up to Class III rapids, spawning salmon, and bald eagles galore. The dark, jagged peaks of the Cascades loom overhead as you float through a primeval forest with towering fir. It’s like floating through a greatest hits album of what makes the North Cascades such a unique and fascinating place. 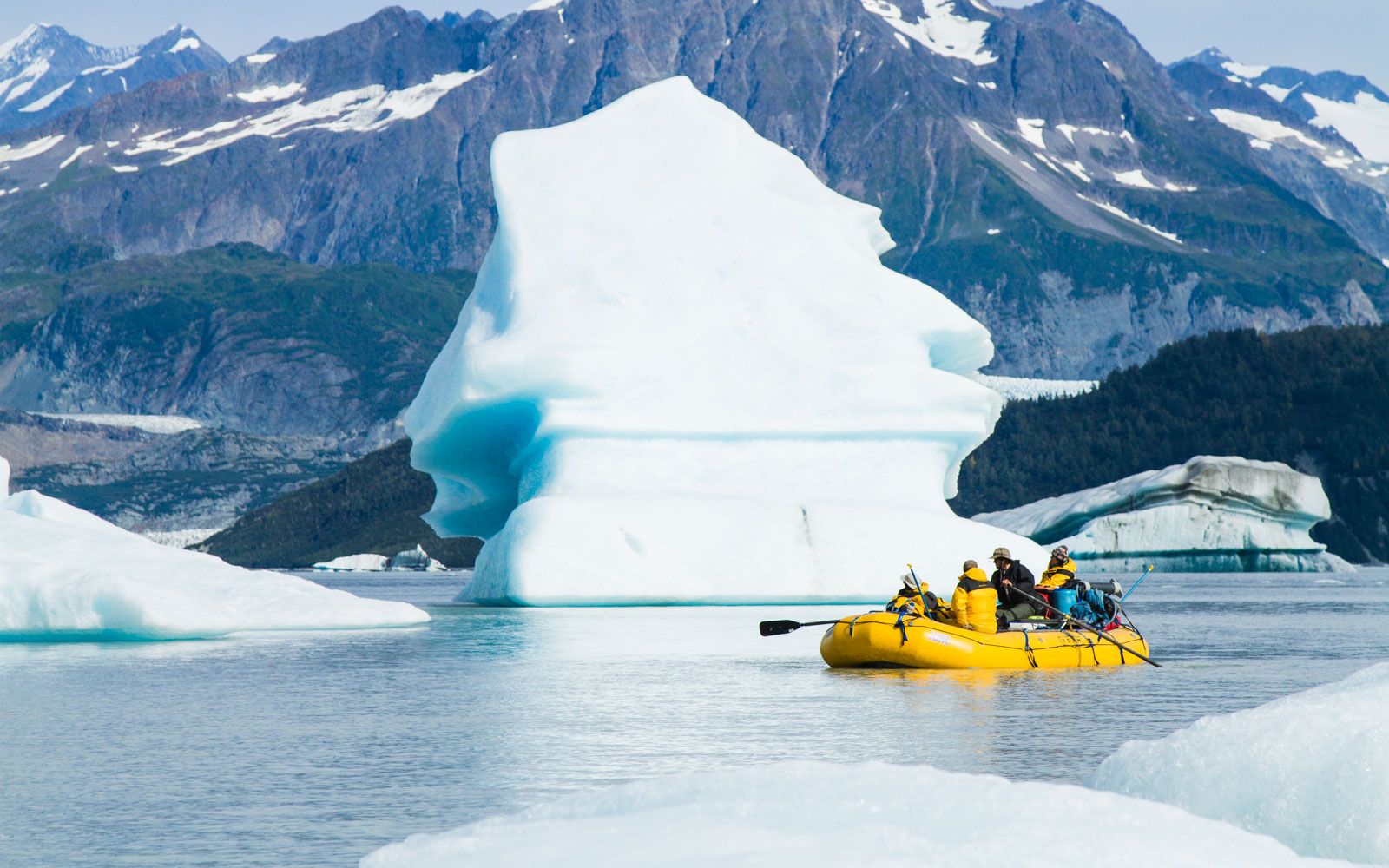 The headwaters of “The Tat” form in the high mountain wilderness of the Yukon and flow through not one, but five national parks in Canada and the U.S. This is the quintessential Alaska rafting trip, where you peer into the Ice Age as you begin among the glaciers, then careen down a whitewater gauntlet between the Alsek and St. Elias Mountain Ranges before emptying into the iceberg-filled Alsek Bay. The grizzlies fishing for salmon, caribou trotting through the timber, and eagles soaring overhead will remind you with each passing mile that you are traveling through one of the last great kingdoms of the wild.

At 10 million visitors a year, Great Smoky Mountains National Park is the most-visited national park in the nation. Most folks see the Appalachian scenery through a car window, but to escape the masses you can leave the pavement behind and float the rollicking waters of the Big Pigeon River. It serves up Class III water, good scenery, fine swimming holes, and is an adventurous addition to any trip to the Great Smokies. To truly beat the crowds, aim to float the river on a warm fall day when autumn colors are sweeping across the mountainsides.

OutdoorTidal Bore Rafting in Canada Is Something You Need To Do
Tagged
Outdoor United States
What did you think of this story?
Meh
Good
Awesome