There’s an old cliché about April showers bringing May flowers, like that’s some kind of optimistic mantra to get you through four weeks of saying, “The weather really should be getting better by now.” But how about instead of finding clever rhymes to survive the unexpected doldrums of April you just get the heck outta town? April is the month where cherry blossoms bloom from DC to Japan, baseball gets back in season, and New Orleans isn’t yet soul-crushingly humid. And it’s Laotian New Year! And there’s loads of bacon in the Bay Area! Read on to find the dozen best spots for your April escape. 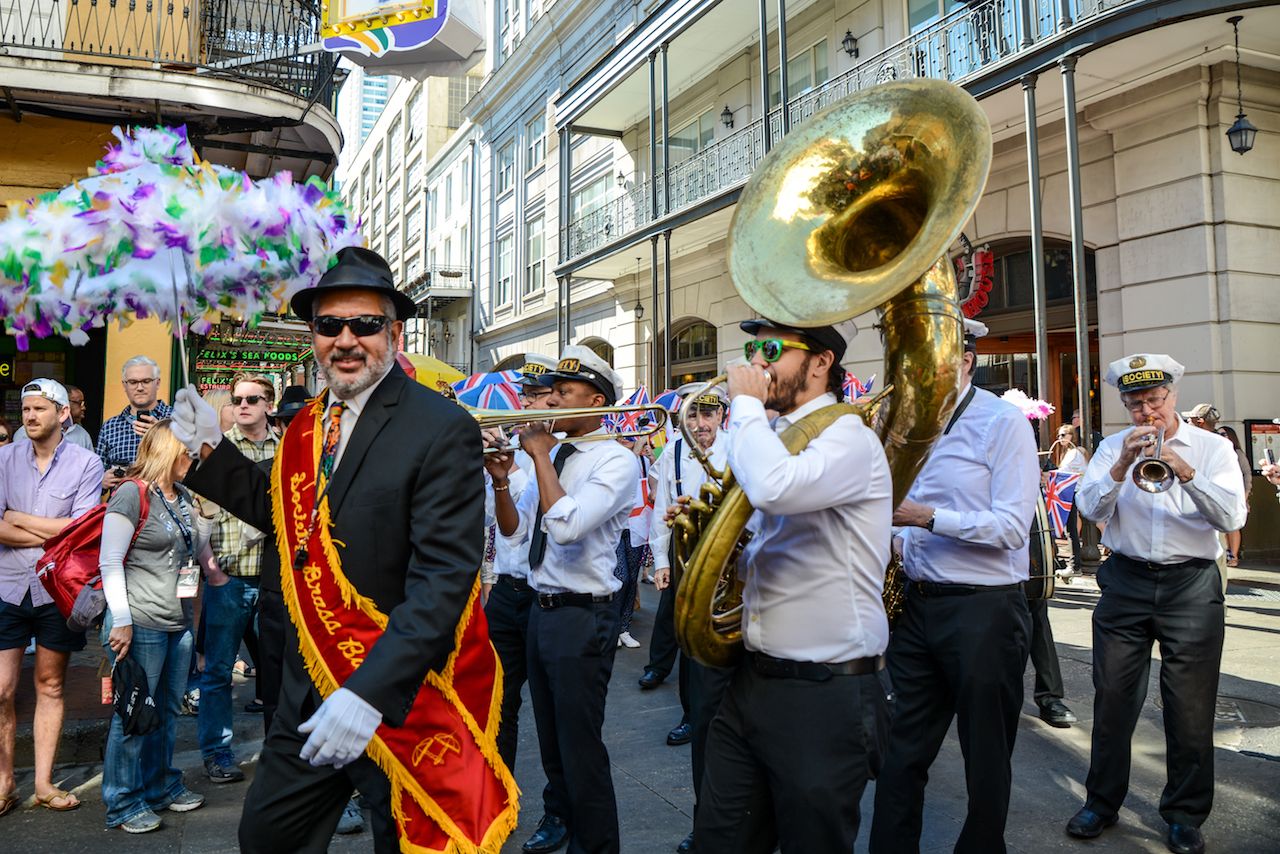 Now that the chaos of Mardi Gras is over, it’s time for a whole new kind of chaos in New Orleans — the 50th annual New Orleans Heritage and Jazz Festival running from the 25th to the 28th. This year’s headliners include The Rolling Stones, Santana, Katy Perry, and The Dave Matthews Band, and lots of other, ahem, older acts who might never tour again. April also brings the opening of the new Sazerac House Museum, the largest space ever devoted to the history of a single cocktail. The weather hasn’t gotten so humid you can feel yourself dehydrating as you stumble down Bourbon Street, and though the city will still be at premium prices, it’s a more relaxing time to visit than earlier in the year. 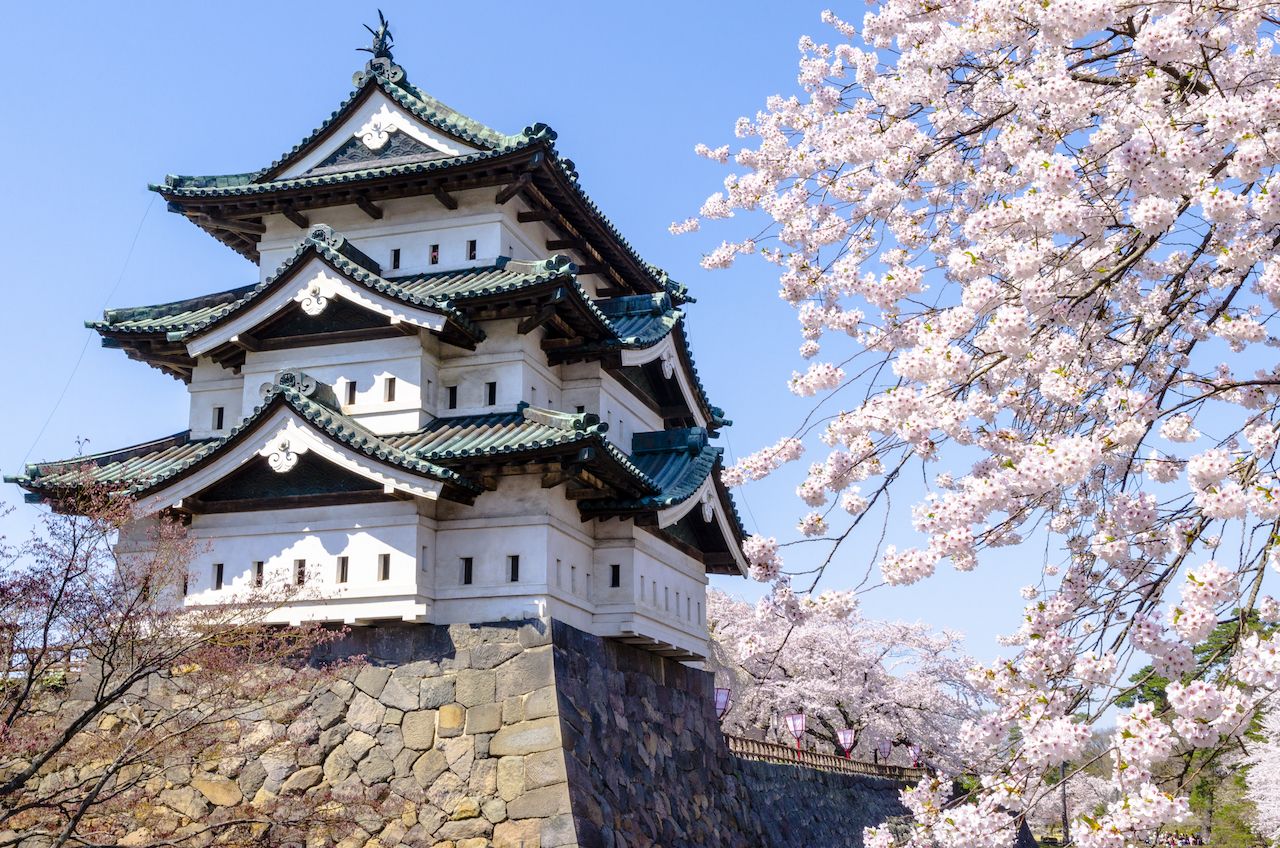 April is the height of cherry blossom season in Japan, where cities throughout the country are covered in pink, bushy landscapes. Different cities boast blooms at different times; late March brings flowers to Kansai and Kanto and the middle of the month is ideal for the Shiroshi River. During the Ogawara Festival, over 25,000 people descend on Ogawara the city to see the view of “1,000 cherry trees at a single glance” as the trees lining the Shiroshi come to life. Later in the month, the park surrounding Hirosaki Castle gets into full bloom from about April 23 to May 6. If you’re feeling extra romantic, the park even offers a special picnic package, limited to 20 people per day. 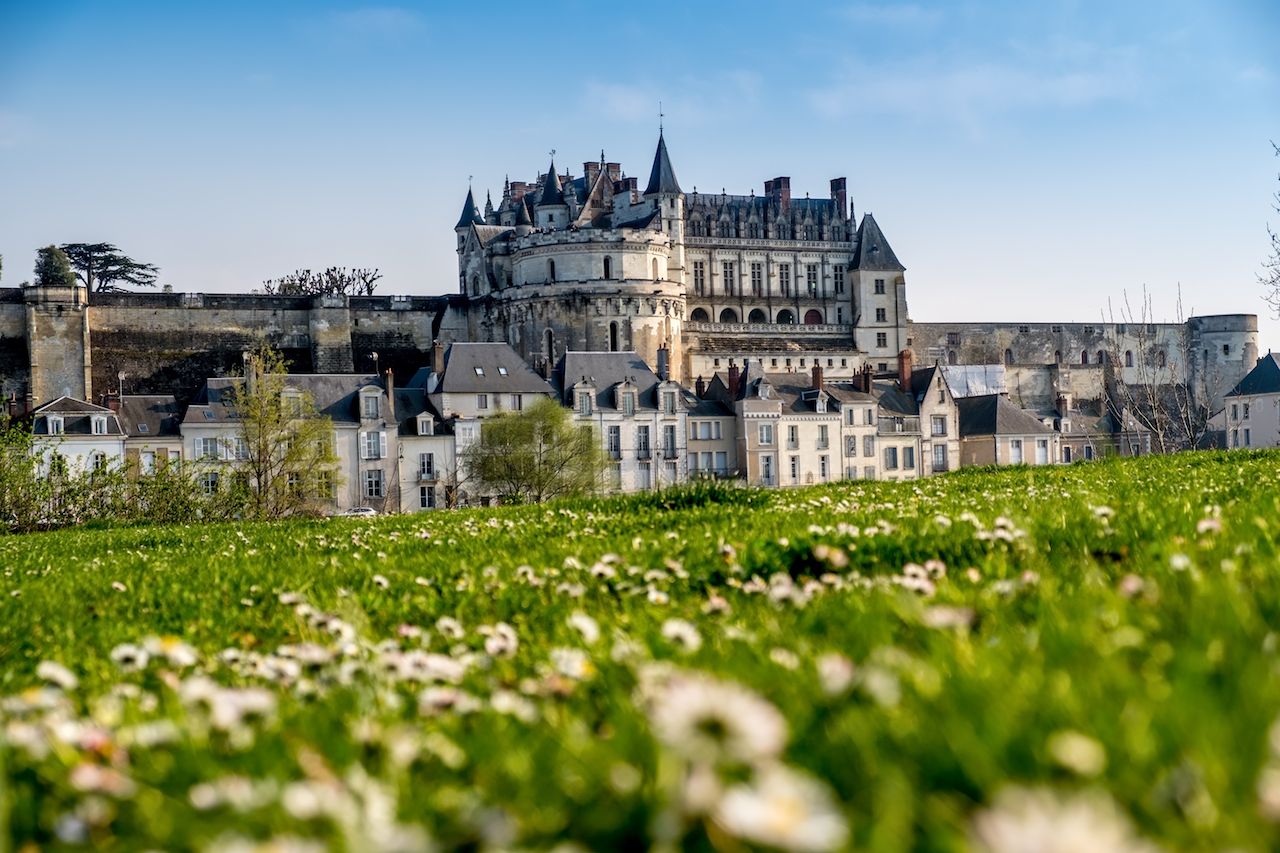 Art majors, time to finally flex your muscle because 2019 marks the 500th anniversary of the French Renaissance. The country will have all varieties of festivities going on all year, but April will be the best time to observe the anniversary in the Loire Valley. The death of Leonardo da Vinci is considered one of the events that symbolized the Renaissance’s beginning, and from the April 13 to May 1, the town where he died — Amboise — will be hosting all sorts of celebrations and commemorations. In addition to riding through the gorgeous rolling green hills of the region and tasting wine along the way, you can also learn Renaissance dancing in Langeais from the 14th to the 25th, then perform in circles at night while flutes and tambourines play on. 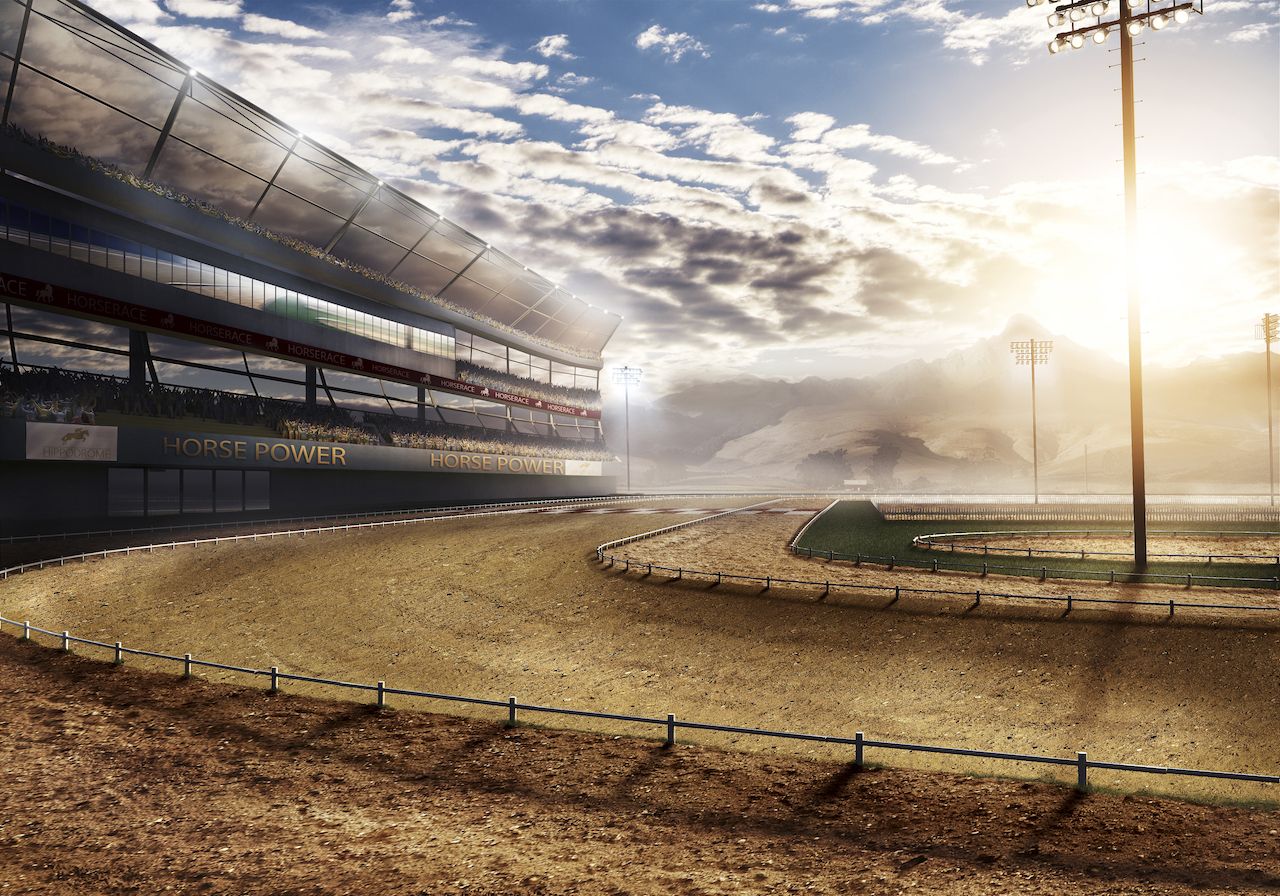 The Kentucky Derby is in neither Lexington nor in April, but you can catch many of the horses that’ll be running in it during the Spring Race Meet at Keeneland Race Course. The nation’s top horses will be running qualifying races all month, giving you a chance to preview, bet on, and curse at horses and jockeys you’ll likely see in next month’s Derby. When not burying your face in the racing form, you can also tour and dine at some of the sights from the most recent season of Top Chef, which was filmed around the state. Check out the Caribbean-inspired Fida’s Caribbean Cafe and its spice-loving BBQ Jerk Burger, as well as Epping’s on Eastside, which sits in an old Epping Bottling Works building and features ingredients sourced from around Kentucky. And of course, no trip to Kentucky would be complete without sampling the state’s famous hooch, both on and off the Bourbon Trail. 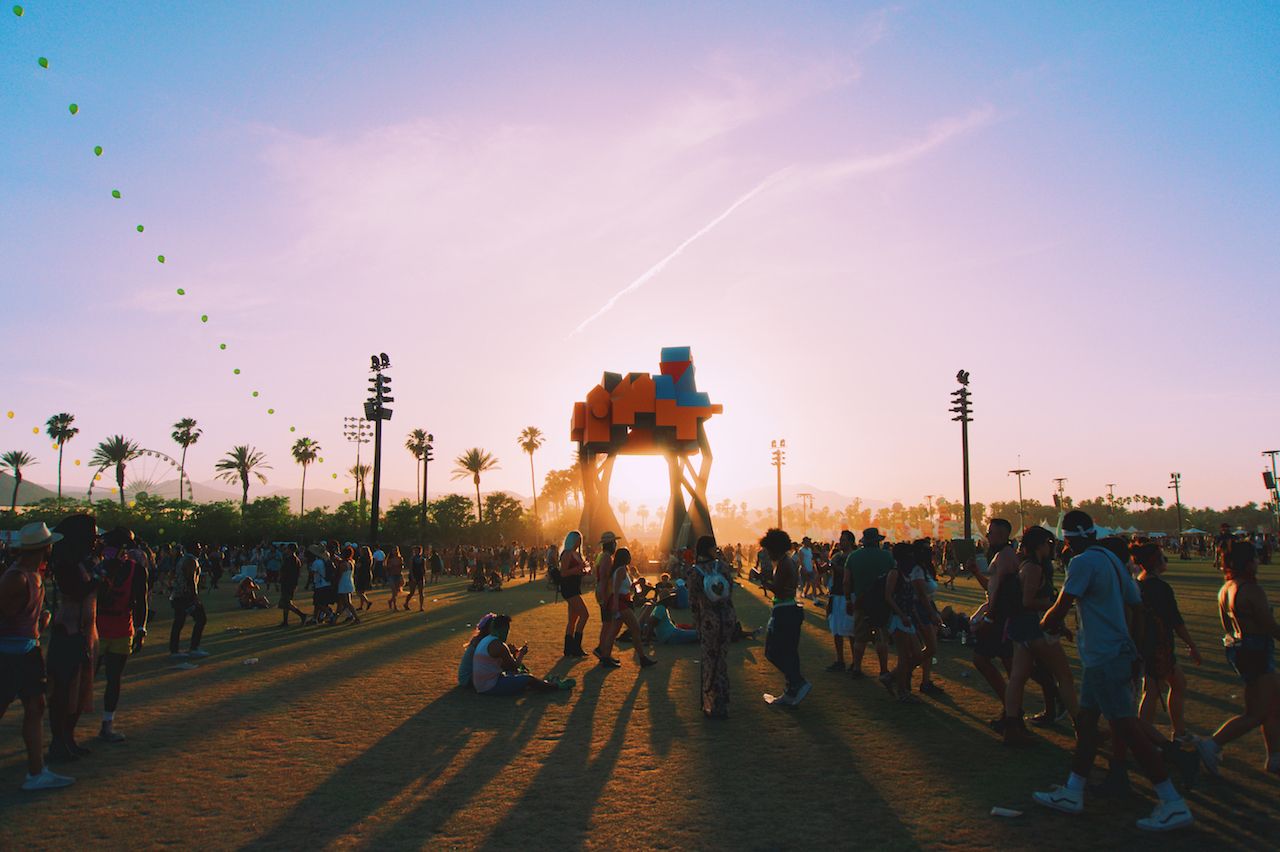 You don’t even need to know who’s headlining the Coachella festival this year to make a trip to Indio and its surrounding areas. Because that festival hasn’t been about the music since they brought Tupac back from the dead, and the party there is the real attraction. After you’ve immersed yourself in modern music for the festival’s first weekend from the 12th to 14th, you can cruise around the still-temperate California desert and take in some of its bizarre-yet-beautiful roadside attractions. After that, hit the festival’s second weekend from the 19th to 21st to catch all the acts you couldn’t see over the sea of cellphones the first weekend. Then stick around from the 26th to 28th for the Stagecoach Festival and catch top country acts like Luke Bryan, Sam Hunt, and Jason Aldean. 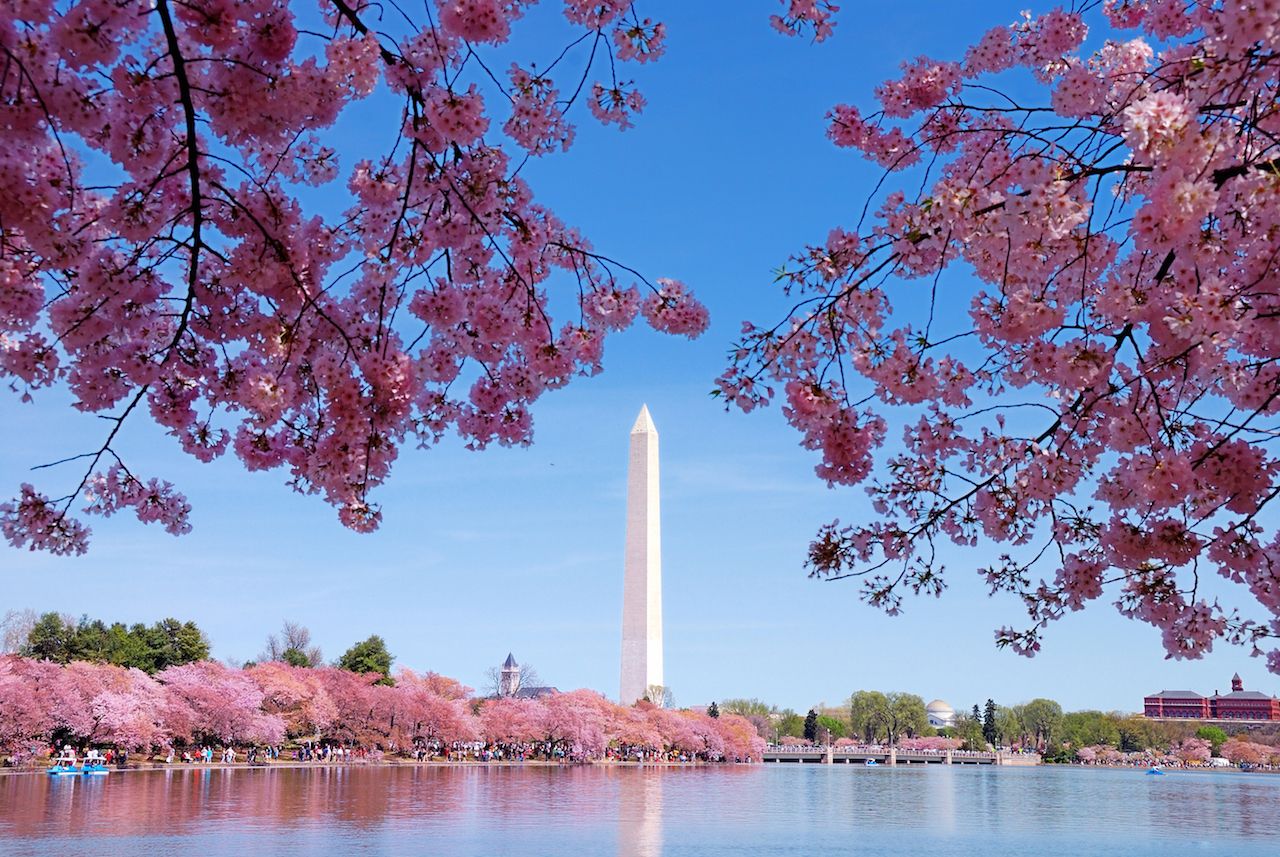 Though you may find yourself fighting every middle school tour group in North America, April is still hands-down the prettiest time of year to be in the nation’s capital. Cherry blossoms line the Potomac River, and the pictures of the pink blooms against the white DC monuments are the best you’ll ever get. Spring also brings the beginning of baseball season, and your chance to catch the Washington Nationals (maybe with Bryce Harper?) during a sunny day game before temperatures get unbearable. If you’re a fan of The West Wing, hit up the Jefferson Hotel, which is honoring the show’s 20th anniversary with immersive West Wing experiences like show memorabilia in the rooms, Ginger’s Popcorn in the hotel kitchen, and “The Bartlet” cocktail at Quill. 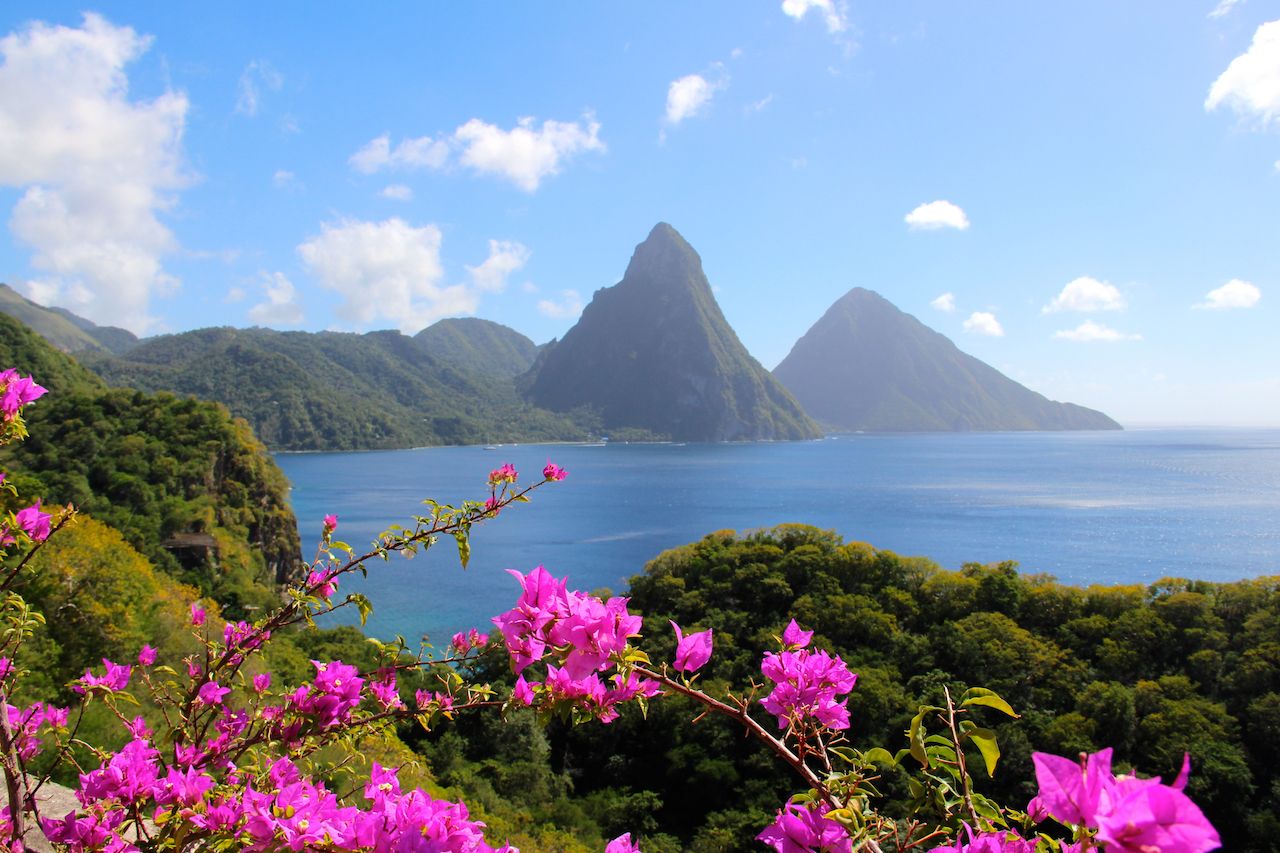 Spring is shoulder season in St. Lucia, when the holiday crowds have died down and the barrage of summer visitors hasn’t yet shown up. It’s also well before storm season hits the Caribbean, meaning you can enjoy lower prices on flights and hotels without the inherent pre-vacation storm tracking that comes with summer trips. While hiking the Pitons and driving through the world’s only drive-through volcano at Sulphur Springs should definitely be on the agenda, you’ll definitely want to be at Jade Mountain from April 4 to 7. That’s when chef Allen Susser hosts a Wine Weekend with The World Wine Guys, offering wine pairing dinners, wine tasting, and rum tastings under the stars on the resort’s expansive, skylit rooftop. 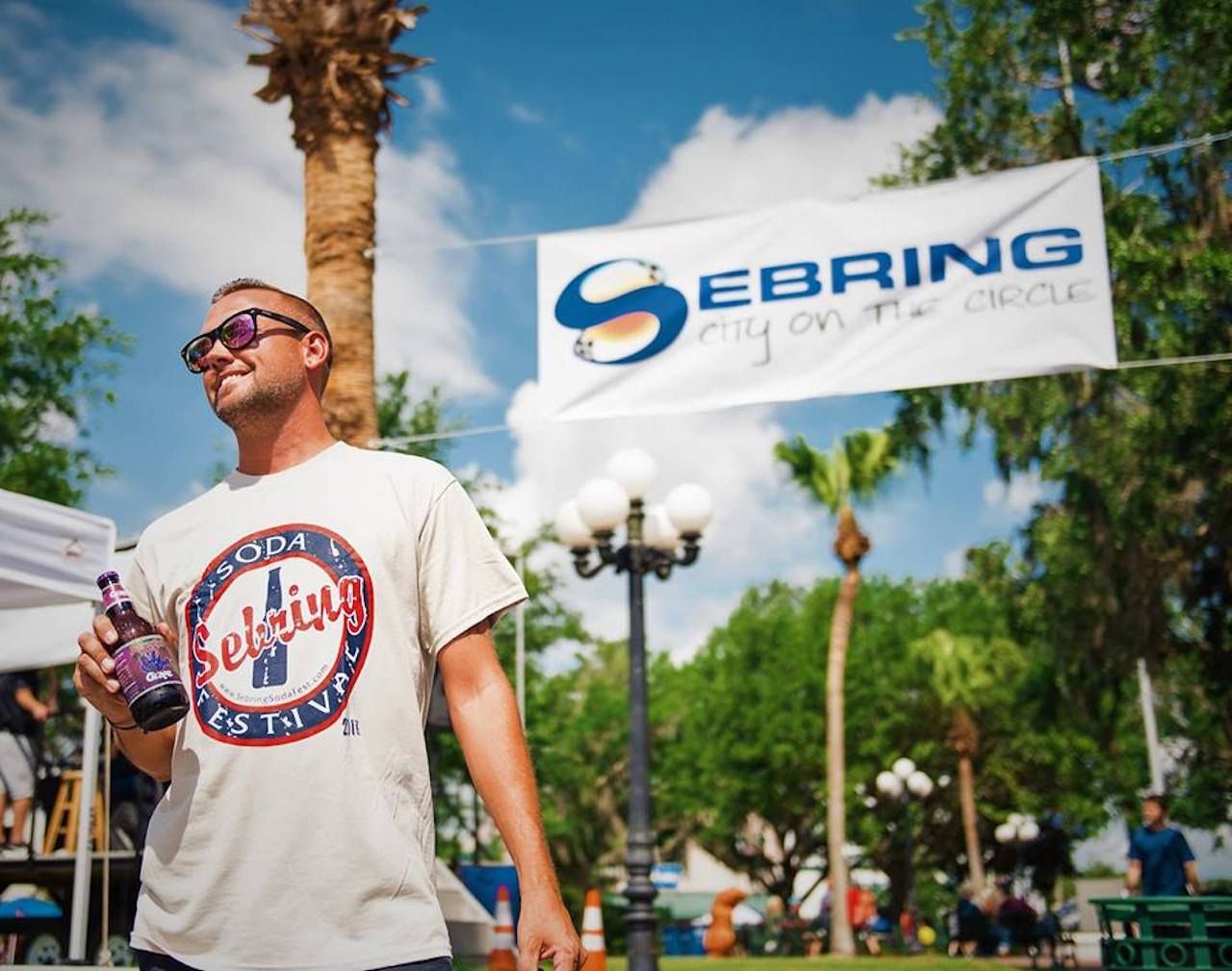 Lovers of sweet, carbonated beverages rejoice! Your Disneyworld is only a couple hours south. April 5-7 turns everything you love about a craft beer festival into a family-friendly affair with the second annual Sebring Soda Festival, where you’ll have a chance to sample over 200 craft sodas from all over the world. There’ll be the usual lineup of colas, ginger ales, root beers, and cream sodas, plus flavors you’ll never see elsewhere like caramel apple, prickly pear, and candied bacon. There’ll also be stuff from Gene Simmons’ Money Bag sodas, as well as cult favorites like Cheerwine, Moxie, and RC Colas. And if you feel like acting like a grown up at the end of the night, there’s a Pop and Fizz cocktail tasting and pairing party Saturday night from 4:00-8:00 PM. 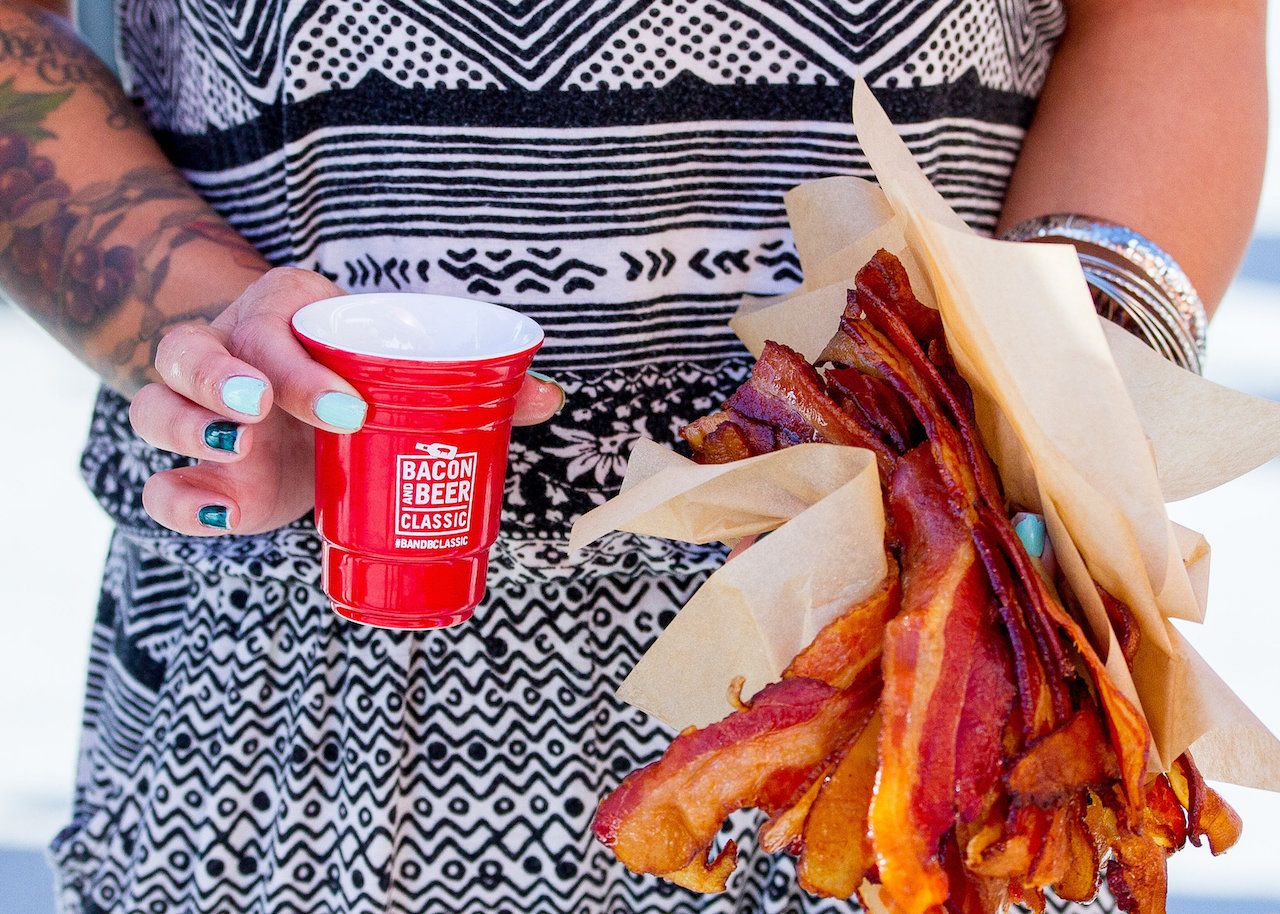 They call the Santa Clara Valley “The Valley of the Heart’s Delight” though your heart might disagree after what you subject it to in San Jose this April. That’s when the nation’s greatest collection of bacon-inspired dishes descends on Avaya Stadium on the 13th for the Bacon and Beer Classic. Bay Area food luminaries like The Art of BBQ, Sweet Dragon Baking Co., Sodacraft/Pop Bistro, Flugger’s Bacon, and over 25 others will be serving up unlimited quantities of bacon-laden delights, which you can wash down with over 100 different beers and ciders.

To burn off, like, two of those samples, get out and enjoy the prime Northern California weather by the Santa Cruz Mountains nearby. Or just give up on health altogether and pig out the next night at the city’s surprisingly affordable Michelin-starred Portuguese gem Adega. Then sip wine in the hills above the Apple HQ mothership at world-renowned Ridge Vineyards. 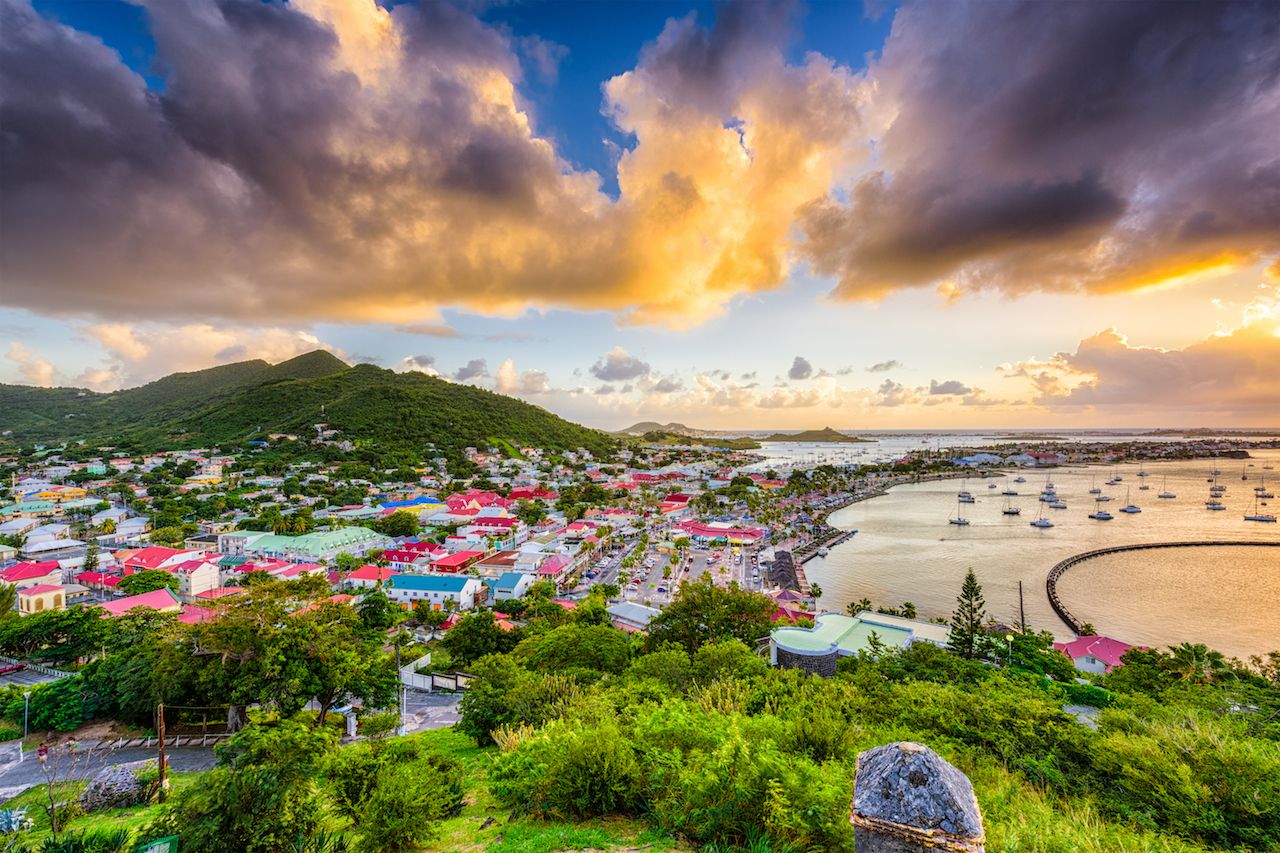 You’ve gotta love the partying spirit of the Caribbean, where nearly every month of the year one of its beautiful, green-and-turquoise islands is throwing its annual Carnival. April is St. Maarten’s turn, where the 50th edition of Carnival promises to be the biggest and best the island has ever thrown. So big that the festivities actually begin in March with 33 days of mas, or pre-celebration celebrations. Then from April 20 to May 7, there’ll be colorful, jubilant parades called “jump-ups” full of elaborate costumes and nonstop Soca music. You’ll also be treated to nightly concerts, loads of local food, and one or two adult beverages to help you along the way. 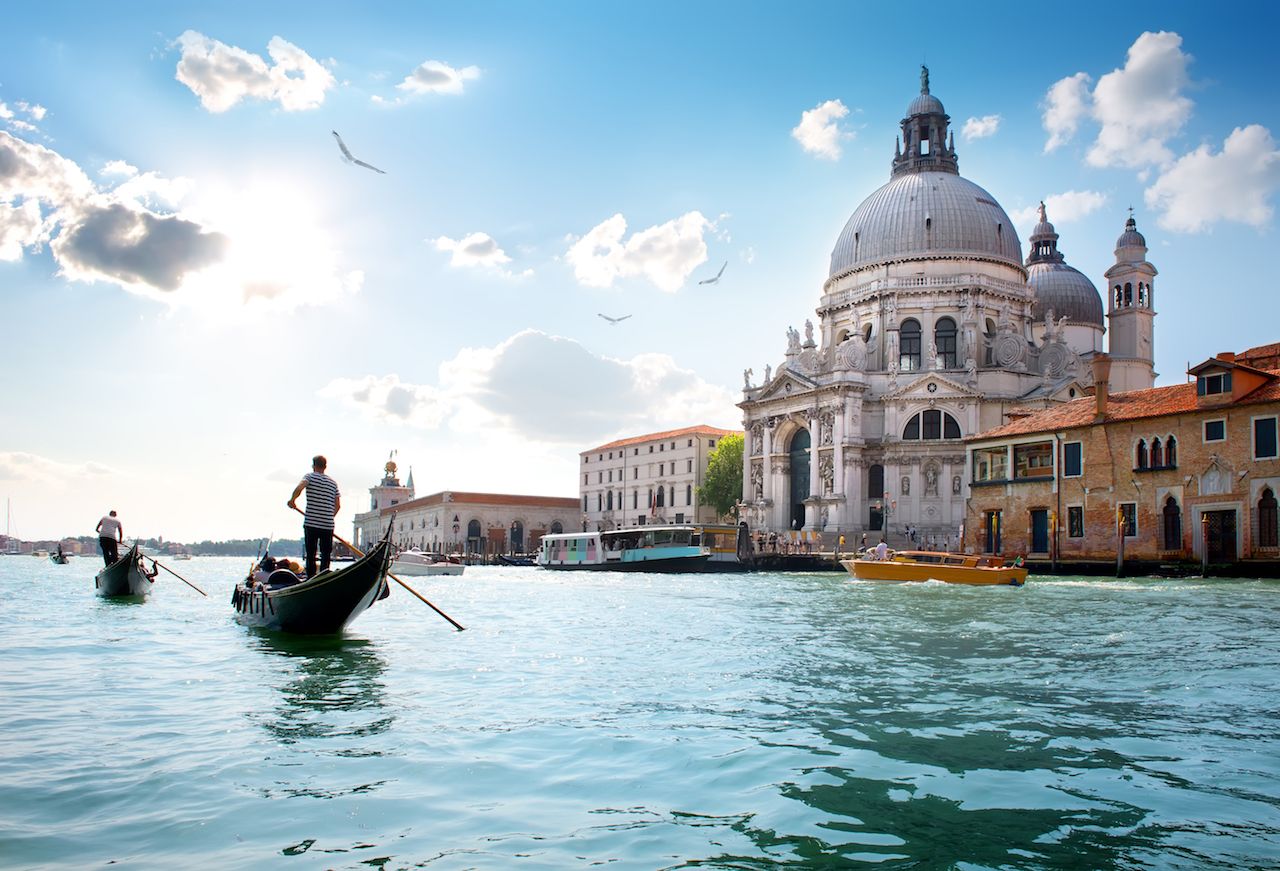 The incredible sinking city of Venice shines brightest in April. Flooding has subsided (mostly), tourists who came for Carnival are gone, and the weather has warmed up without the stench of summer setting in yet. The month also welcomes the feast of St. Mark — Venice’s patron saint — on the 25th, and it’s a much more locally loved celebration than Carnival. Festivities include a gondola regatta through the canals of the city, plus daylong celebrations in St. Mark’s square. Once the party is over, April is a great time to check out museums like the Gallerie dell’Accademia and Peggy Guggenheim Collection before they are completely jammed with tourists. Or you can catch an opera in one of the most spectacular venues in the world at the Teatro La Fenice. 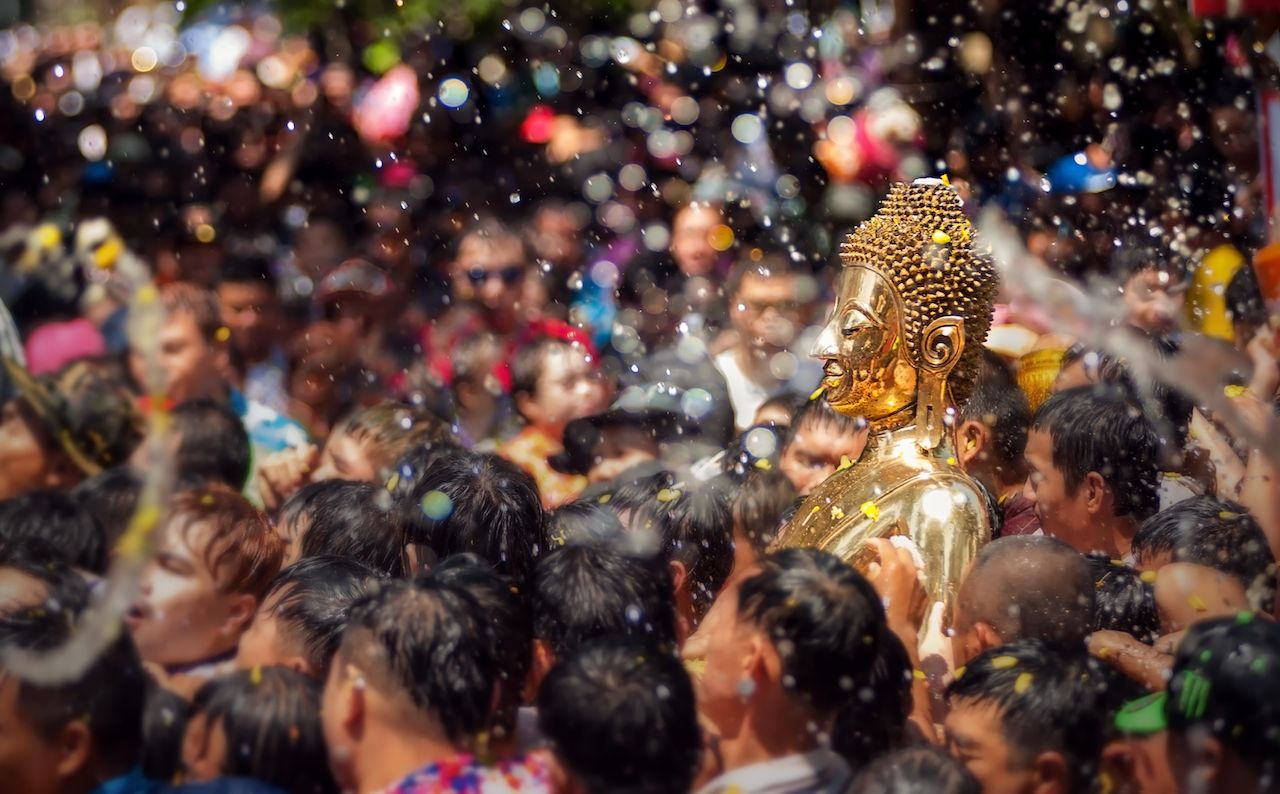 Happy Laotian New Year! You didn’t know it was Laotian New Year? Well, it would be hard to escape if you were in this under-appreciated southeast Asian paradise that most Americans only know as the home to Hank Hill’s neighbor. If you want to experience Laos, April is the time to go; the country celebrates Songkran, a New Year’s celebratory week of festive parades, fragrant markets, and engaging concerts. Just be sure to get a case for your phone and wear underwear under anything white: Songkran tradition dictates people splash each other with warm water to wash away the previous year’s sins. Though unlike similar festivities in Thailand where people take to the streets armed with Super Soakers, Laotians are typically nice enough to ask before they douse you — but you can never be too careful.

Everything you need to know about Japan’s 2019 cherry blossom season
Tagged
Insider Guides
What did you think of this story?
Meh
Good
Awesome