Anyone who’s ever seen a late-season Bills game in Buffalo, New York, where snow piles up on fans as they sit in sub-freezing temperatures, has likely watched with a combination of confusion and pity.

“Who are these people watching football in a Zubaz-filled Siberia?” you wonder. And, moreover, why do they all look so happy?

Until the 2021 regular season, Bills football was definitely not the reason for the happiness. And though you could point to the excessive amounts of Labatt Blue consumed in the parking lot, the real reason is this: Winter in Buffalo is a lot of fun.

Sound insane? To one who has only experienced the joys of a Western New York winter from afar, it might. But spend a few days exploring the snow-covered backcountry and delving into Buffalo’s downtown winter delights, and you too will understand why Bills fans look so darned delighted.

Escaping into snowy woods and immersing yourself in winter 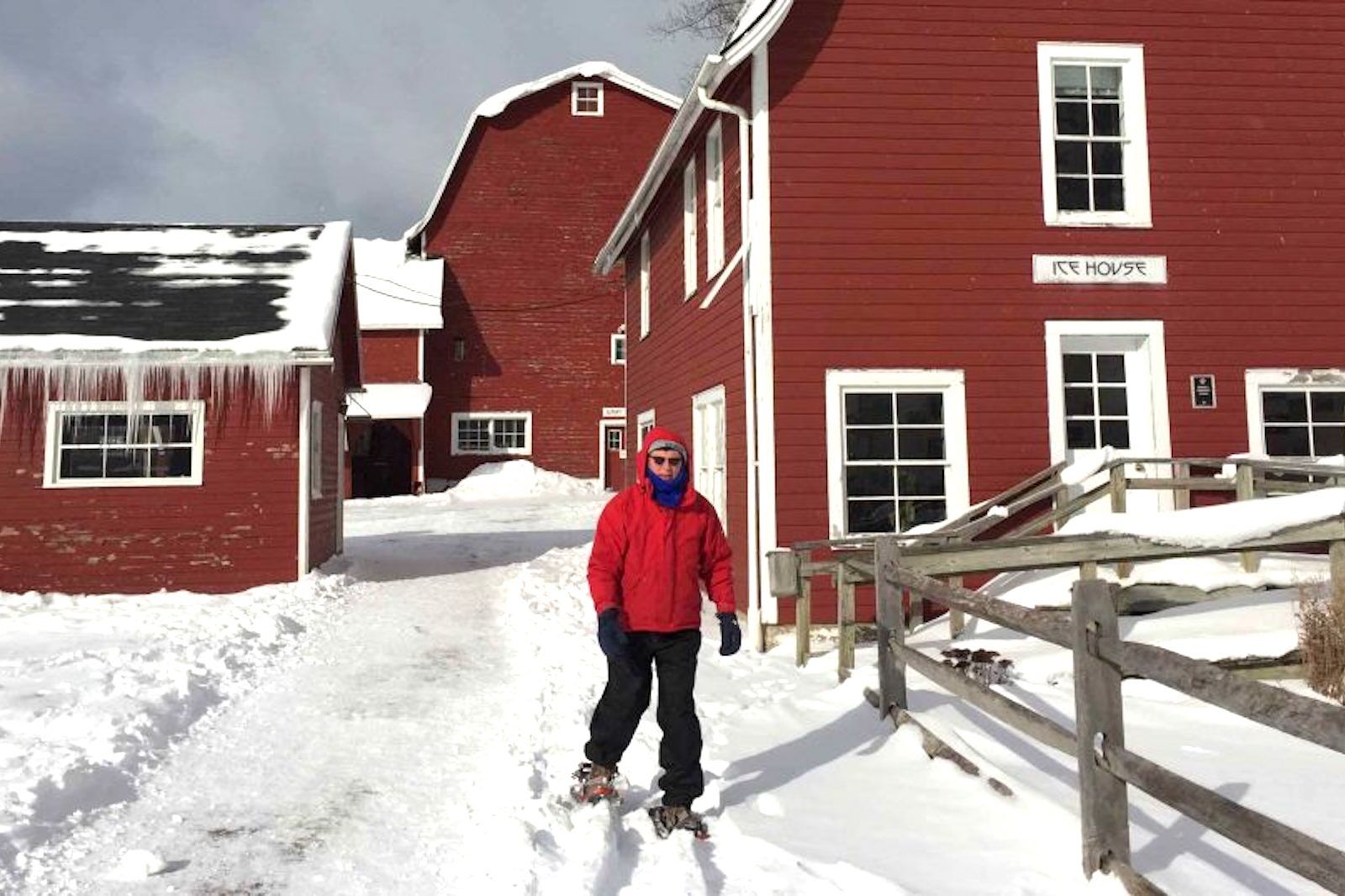 “I always envied the winters of Western New York,” John Cimperman says as he sips a North Asylum Porter by a firepit at his 42 North Brewery in East Aurora, just southeast of downtown Buffalo. “It’s where we’d go to ski and mountain bike, so when I had the opportunity to move here, I wasn’t scared of the winter, I was looking forward to it.”

The Cleveland native is now a champion for the wild joys of the Buffalo region, based out of his wood and stone brewhouse just off East Aurora’s main drag. It’s a sort of sudsy log cabin in the woods, ideal for warming up after a day of snowbound adventures.

His brewery is also responsible for one of winter’s biggest highlights: the annual Brew Ski race. It’s a 2.5-mile trek around Knox Farm State Park, where hikers, cross country skiers and snowshoers navigate a course of beer-filled stopping points. It’s a little like San Francisco’s Bay-to-Breakers, but with a lot more clothing.

“We sell that event out every year,” Cimpermann says proudly.

Of course, winter fun in Buffalo isn’t limited to one beer-filled afternoon hiking through a park. Even without beer stops, Knox Farm State Park blankets you in the quiet isolation of winter, where a mile’s walk past the stone games brings you to the middle of a forest that feels a universe away from civilization.

About 40 minutes south of the city sits Sprague Brook Park, a 974-acre tract with an easy-to-traverse eight-mile loop, perfect for a half-day of cross country skiing. If you can hit it on a cold, clear day, it’s a heart-pounding glide through the thick of winter, that’ll have you taking off your top two layers within 30 minutes.

The hiking highlight, however, sits inside Hunter’s Creek County Park, about four miles from 42 North’s taproom. Though it’s only 400 acres, it boasts over 40 different trails that all take you deep into deciduous trees and stream beds, making you feel small under the height of the wilderness around you.

“When you get into (Hunter’s Creek), you don’t know if you’re in Buffalo, or Colorado, or Vermont,” says Cimperman. “It’s just diverse terrain and rivers and trees, and it’s so pretty you might get lost.”

He points out, however, that trails are all color coded and maps are readily available. So “lost” is really more of a mental state than a physical one. 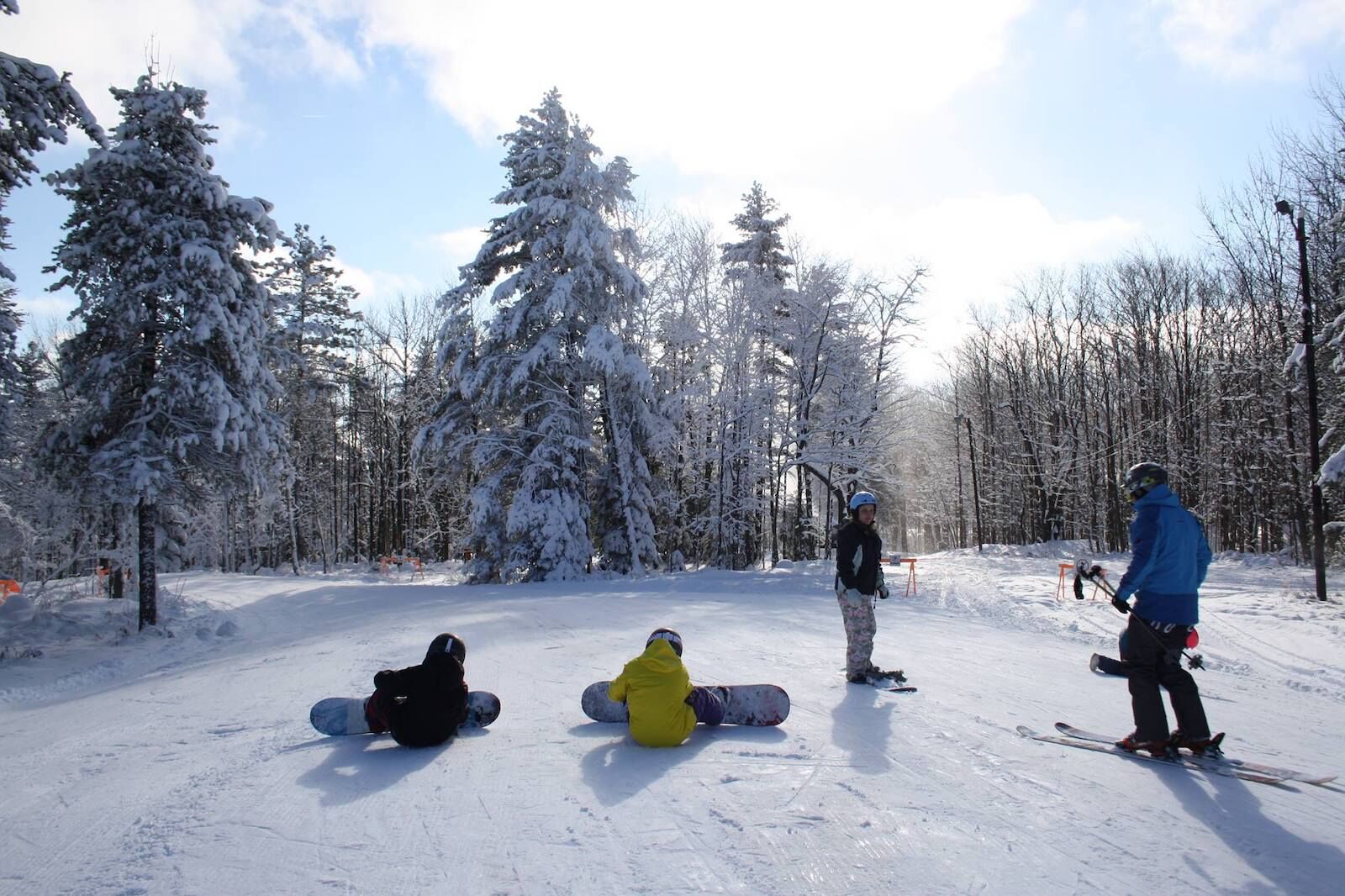 While expert skiers won’t find the miles of vertical feet they might in Utah, Buffalo has a surprisingly serviceable ski scene with slopes that are reliably blanketed in snow every year.

Kissing Bridge is the quintessential Buffalo day hill, a 700-acre ski park with 39 runs and nine chairlifts. Granted, you’re only getting 550 vertical feet of action here, so for adrenaline junkies it’s not going to fit the bill. But if you’re new to skiing or snowboarding, it’s a pleasant place to learn without the constant blur of expert skiers swishing past you.

For more of a Vail-by-the-Great-Lakes vibe, head a little south to the village of Ellicottville. It’s the jumping off point for Holiday Valley ski resort — a 1,000-vertical foot resort that draws weekend crowds all winter. The town is choc full of lively bars, homey restaurants, and friendly people, and while the skiing might not be world class, the experience in Ellicottville still is.

“I think what really differentiates skiing in Western New York from Colorado is the convenience,” Cimperman says. “From the time you leave your house in Buffalo to the hill is less than 45 minutes. If you live in Denver, that can be two hours. So what we lack in vertical, we make up for in proximity.”

Outdoor adventure in the heart of the city 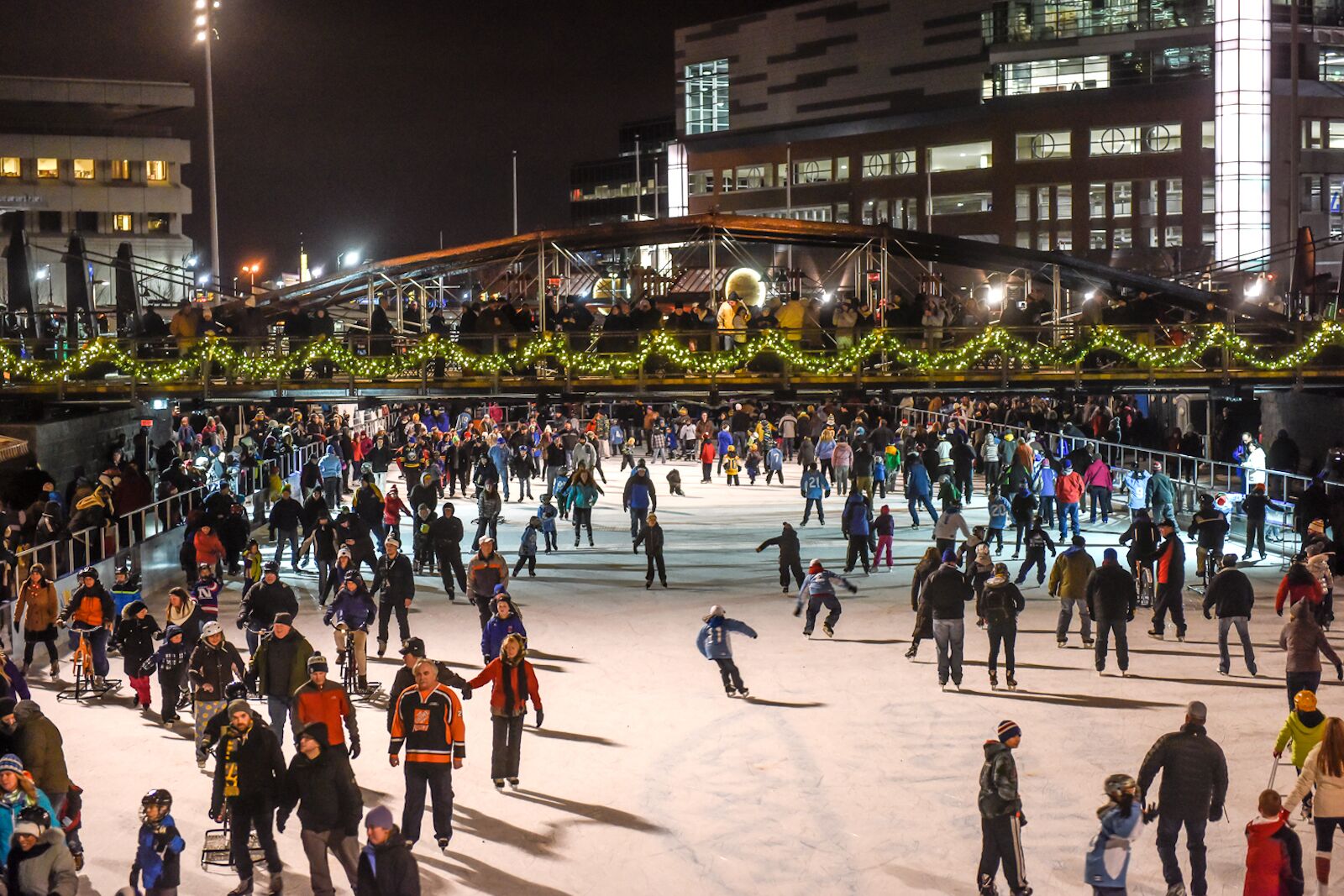 Winter sports and expeditions aren’t limited to outside of the city limits. In downtown Buffalo, the main attraction is at Canalside, where a seasonal ice skating rink becomes a social hub. Families, teenagers, and couples on skate dates fill the ice with an energy one wouldn’t expect under such gray skies. They’re incentivized by the rinkside bar and heated igloos, where servers bring beers and hot cocoa on demand.

Canalside isn’t just a rink, though. The best part of the experience are the bumper cars on ice, where divers slide around the course crashing into their friends with slippery abandon. Canalside also offers a chance to try curling, the quintessential winter sport we all enjoy during the Olympics and then forget about for four years.

The downtown winter center also rents ice bikes, which at first sound like an excellent way to break your collarbone. But it’s not like Canalside is letting you loose on the rink with a two-wheeler. The bikes sit inside a brace, so they don’t tip as you pedal across the rink. If you’re not an ice skater and still want some frozen fun, it’s a fantastic – and far less embarrassing – alternative.

Warming up with a Tom & Jerry 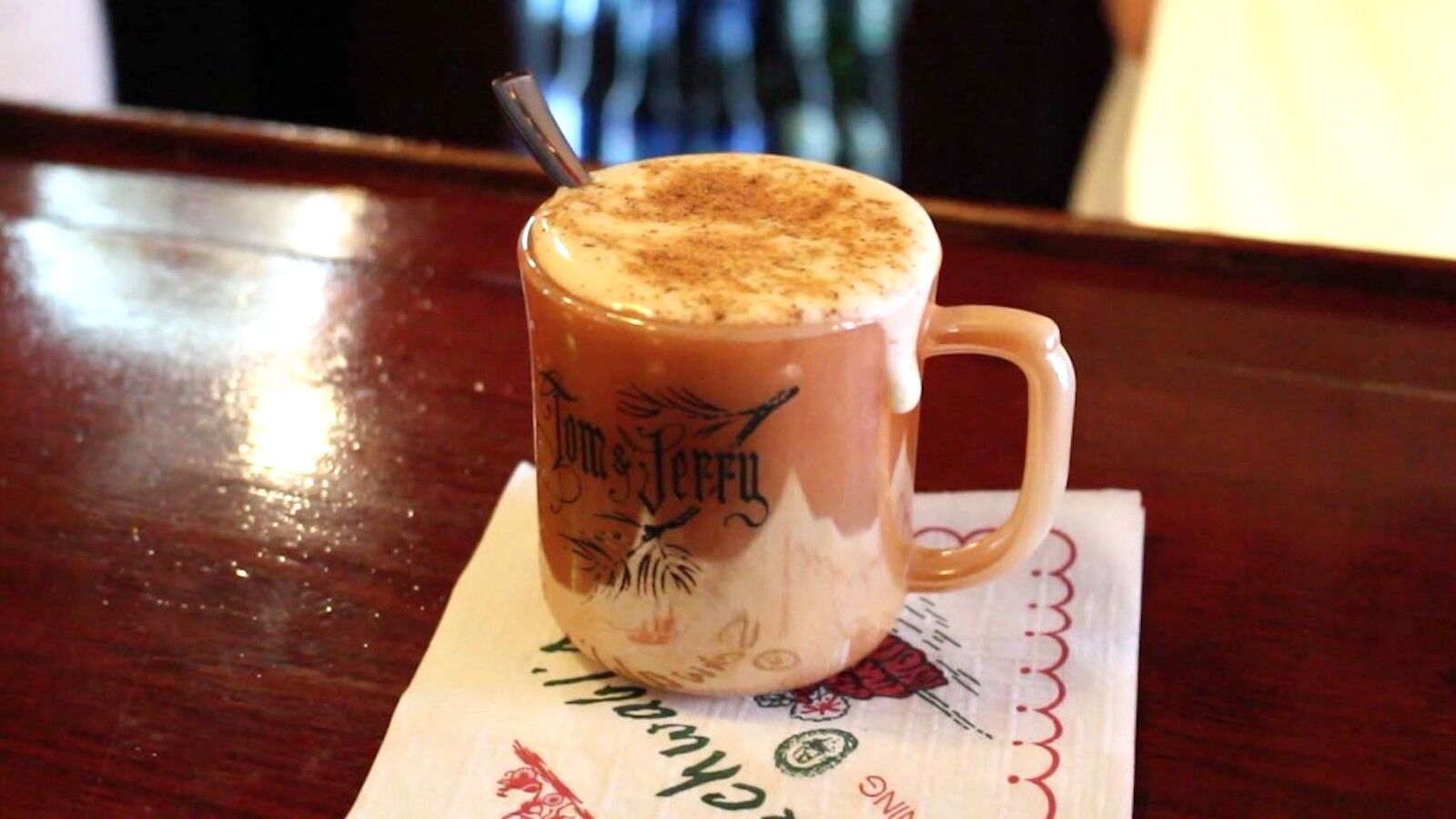 What may be the best part about Buffalo in the winter is warming up when you come in from the cold. The coziness one feels when walking into a heated home is ever present in the City of Good Neighbors, where bellying up to the bar at The Place for a Tom & Jerry will have you making new friends before you even take off your coat.

The Tom & Jerry bonds Buffalonians almost as much as football. The holiday cocktail is perhaps more prevalent in Buffalo than any other city, and it’s an undeniable taste of winter in Nickel City. It’s a creamy, eggnog-ish hot drink that’s spiked with brandy and rum and then topped with a sprinkling of cinnamon and other spices. You can find them at most bars, but The Place, with its wood-lined walls and epic portions, is the quintessential spot. Finding a table can be tough, but posting up at the bar and chatting with locals is probably the better move. If nothing else, you’ll learn why this drink – like Bleu cheese and the Bills – is such a source of civic pride.

Buffalo is, above all else, a city where everyone makes you feel at home. And while you’ll still feel it during warmer months as you bar hop through Allentown, winter is when it shows best. Buffalonians take pride in their snowy winters like they do in their wings, and it’s not just a mindset to distract from the cold. Winter here is fun as long as you dress the part. It’s just all about having the right mindset.

A Buffalo Company Wants To Give You a Free Trip There This Winter. And You Should Totally Go.