Much as Washington, DC, has the Smithsonian museum complex, Los Angles has Exposition Park, a 160-acre campus housing some of the city’s most important museums. Chief among them is the California Science Center, a Smithsonian Affiliate, whose more than 150 interactive exhibitions attract more than two million visitors each year.

With so much to see and do, you’re gonna want to make a game plan before you visit the California Science Center. To help, we’ve asked Dr. Liz Roth-Johnson, the museum’s Curator of Life Sciences, to share her tips and tricks for getting the most out of your day at the museum. After receiving a Ph.D. in Molecular Biology from UCLA, where she later held a teaching position, Dr. Roth-Johnson joined the Science Center team in 2020 where she relishes finding “new ways to make biology fun, memorable, and accessible to as many people as possible.”

Before you go: the #1 piece of advice before visiting the California Science Center 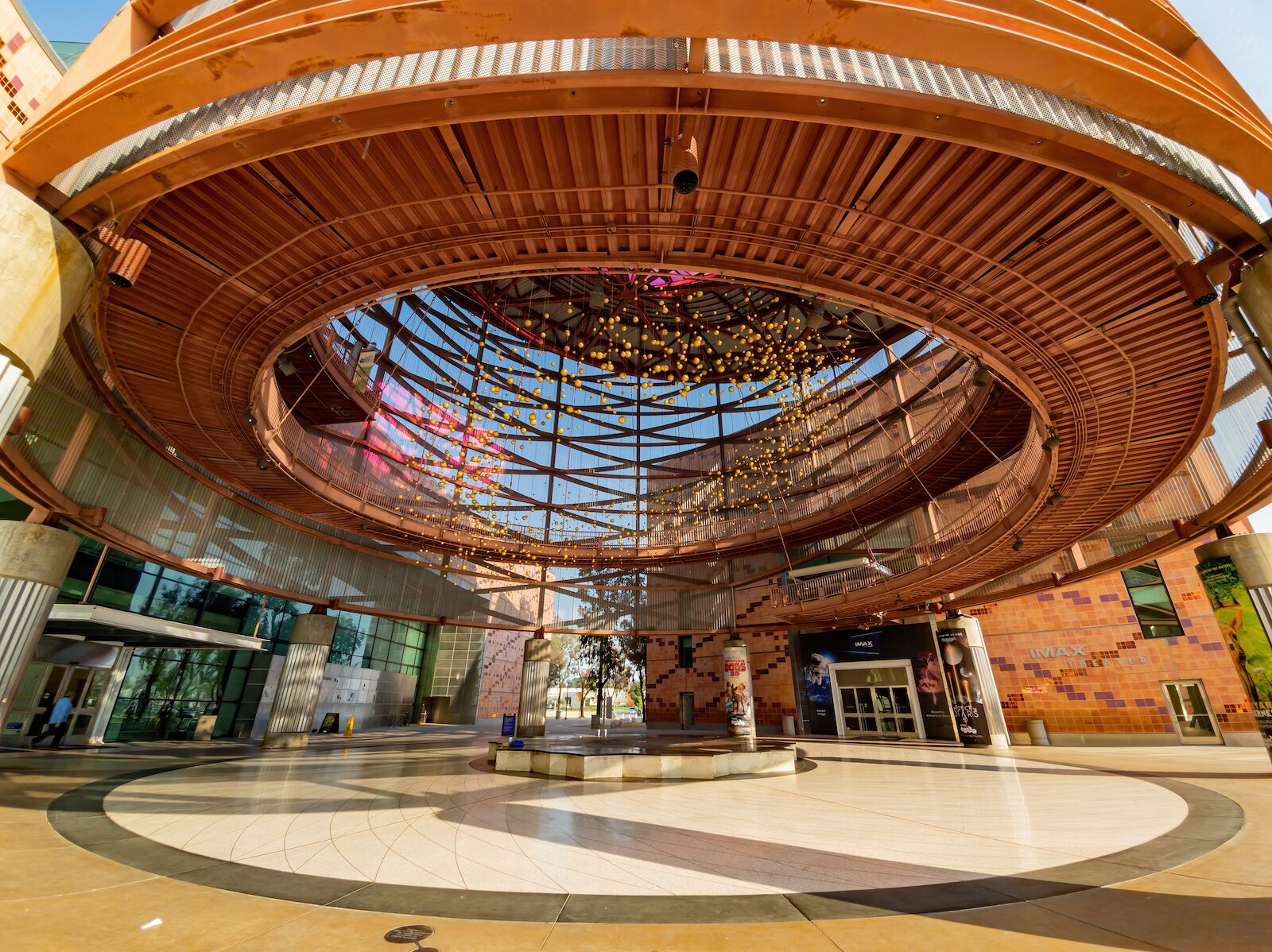 At 245,000 square feet, the California Science Center is almost as big as the British Museum, the largest museum in the United Kingdom. “There’s so much to do,” says Roth-Johnson. “You’ll want to prioritize, especially if you have limited time or little ones.”

Her suggestion for planning an airtight visit is twofold: First, get well acquainted with the museum’s website to see what’s on offer and figure out what interests you most, and then make a reservation to drop by when it’s most convenient for you.

It’s free to visit California Science Center’s permanent exhibitions, with the exception of the IMAX theater and any special exhibits. The Endeavour Together simulator is $6 for general admission and $5 for members.

Hours at the California Science Center

The California Science center is open every day from 10 AM to 5 PM. While you do not need a reservation for the permanent galleries, including Space Shuttle Endeavour, timed tickets are needed for special exhibitions and for the IMAX Theater. You can puchase your timed ticket online.

The best times to visit the California Science Center

The best times to visit the California Science Center and beat the crowds depend on the season.

According to Roth-Johnson, Monday, Tuesday, and Wednesday afternoons in late August and September are the ideal times to visit the museum because it’s easiest to avoid school groups.

In late summer and early fall, “school has just started … and field trips have not yet started up” while later in the year students tend to clear out after 2 PM on weekdays. The beginning of the week is also generally quieter than the days leading up to the weekend.

If you do plan to come on a Friday, Saturday, or Sunday, “the earlier in the morning, the better,” says Roth-Johnson. You’re unlikely to avoid the crowds entirely on weekends, but you’ll get a better view of popular permanent exhibits such as Space Shuttle Endeavour and Kelp Forest in the Ecosystems gallery if you set an early alarm.

Where to start your visit to the California Science Center 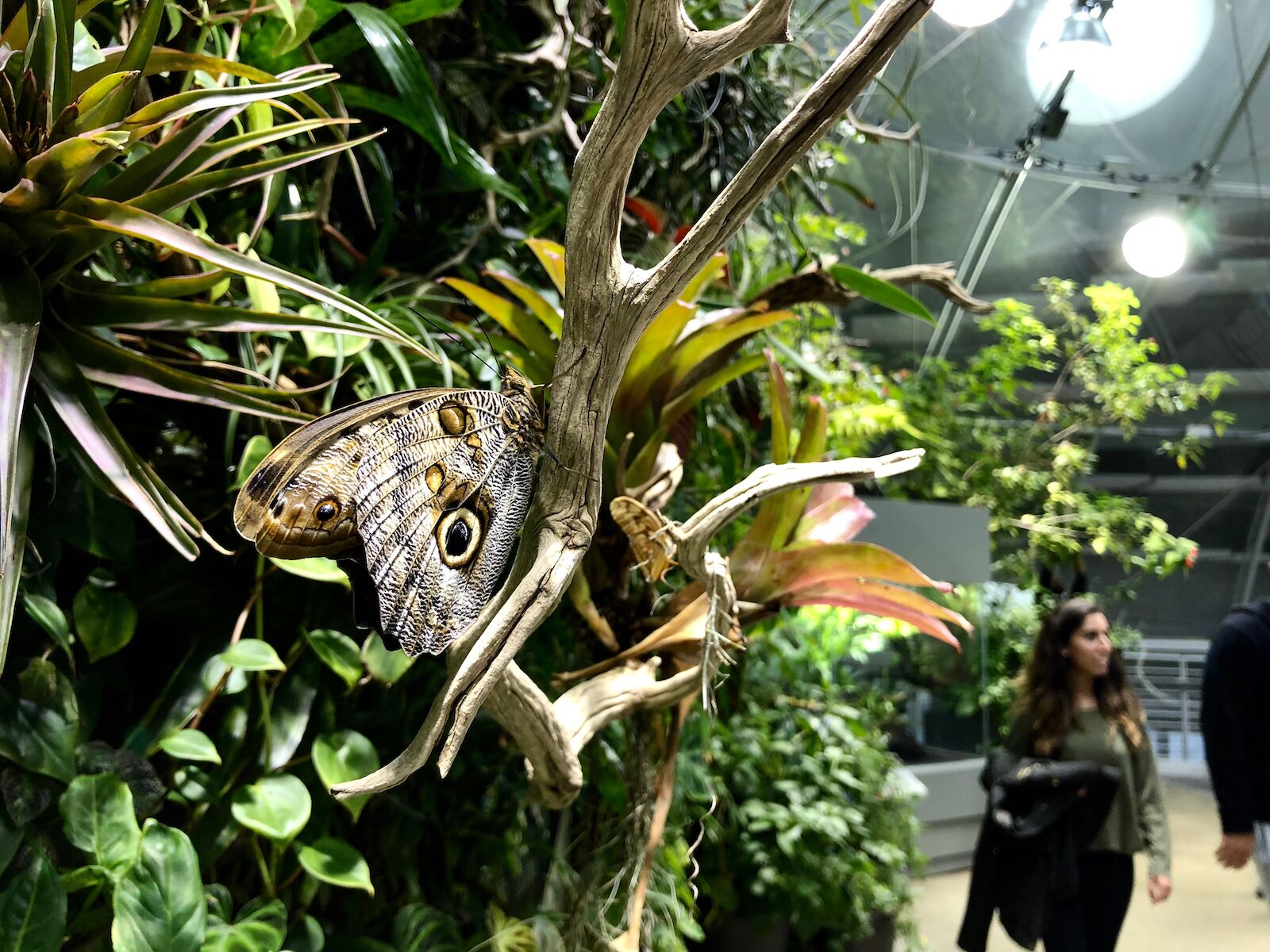 Of all the museum’s exhibits, Endeavour draws the biggest crowds, so if you’ve heeded Roth-Johnson’s advice to visit early on a weekend morning, you’ll want to beeline for the space shuttle to see it before everyone else gets there. Other than that, her philosophy is simple: Visitors should start by seeing whatever interests them the most.

The only caveat there pertains to limited-time exhibitions with an accompanying IMAX film, such as “Angkor: The Lost Empire of Cambodia” and “Angkor 3D.” In that case, Roth-Johnson recommends starting with the film to get a “good overview” of the exhibition you’ve come all that way to see, then hit the actual exhibition after.

How long does it take to explore the California Science Center?

The minimum amount of time you’ll want to spend at the California Science Center is two hours. That said budget to spend three to fours hours at the museum; there is a lot to see, especially if you are visiting with children. 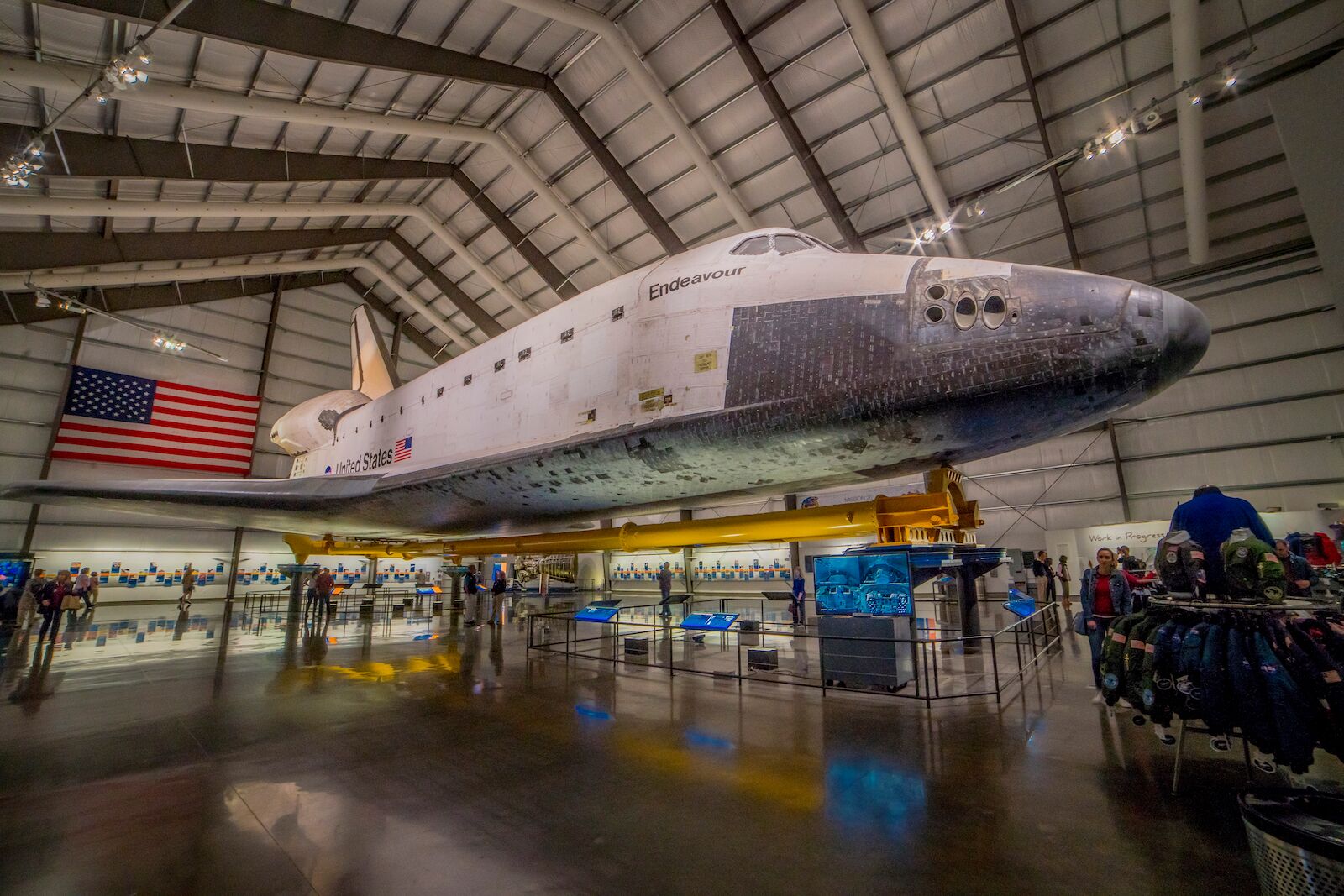 Endeavour is one of a small handful of retired space shuttles that are now on display in the US. It went to space 25 times between 1992 and 2011 on missions that included service and assembly to the Hubble Space Telescope and International Space Station. The space shuttle is now on display in the Samuel Oschin Pavilion alongside an exhibit called “Endeavour Together: Parts & People” that features artifacts such as an external tank, a flight simulator, and a video detailing the complicated process of transporting the space shuttle to the museum.

Despite the excitement surrounding Endeavour, one could argue that the SKETCH Foundation Air and Space Exhibits in the museum’s Science Court are more exciting for spacecraft enthusiasts. It’s filled with interactive exhibits that are broken down into four categories: “Air & Airfract,” “Stars & Telescopes,” “Humans in Space,” and “Mission to the Planets.” Here, visitors can strap on wings and enter a large wind tunnel to see what force it takes to lift aircraft off the ground, simulate a test flight of the 1903 Wright Flyer using the same method as the Wright Brothers, and launch a model space rocket 40 feet in the air. Also on display are three flown space capsules from the Mercury, Gemini, and Apollo space programs, model satellites, a moon rock, and more. 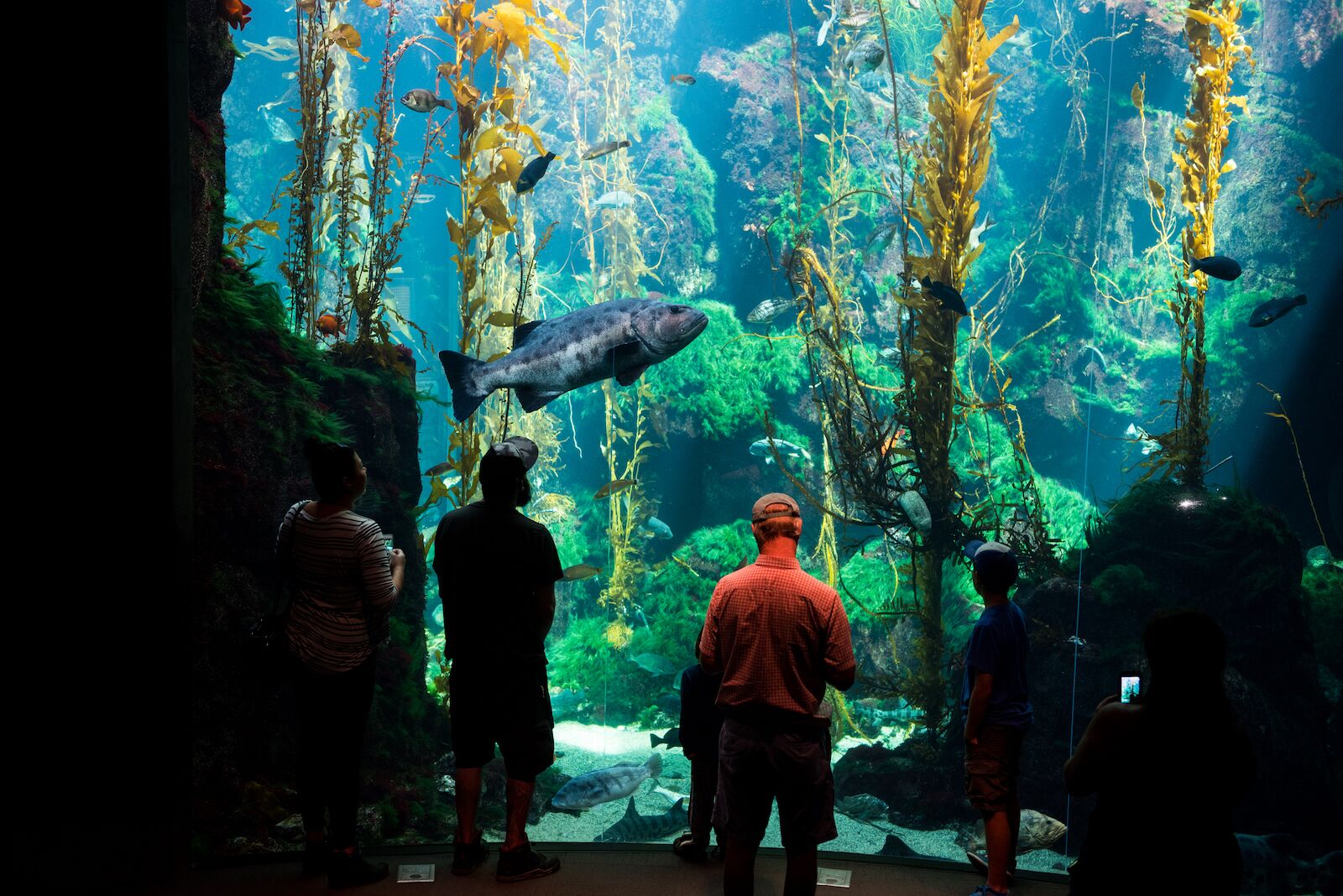 Of the nine exhibits in the Ecosystems gallery — Kelp Forest, Rocky Shore, Desert, Poles, Deep Sea Vents, Island Zone, River Zone, LA Zone, and Global Zone — the undersea world of Southern California’s kelp forests is most fascinating to visitors. The exhibit is comprised of a 188,000-gallon tank that’s been filled with kelp that can “grow as large as trees” and marine life such as leopard sharks, moray eels, and spiny lobsters. Visitors walk through with iPads in hand to read up on the species present as they identify them. 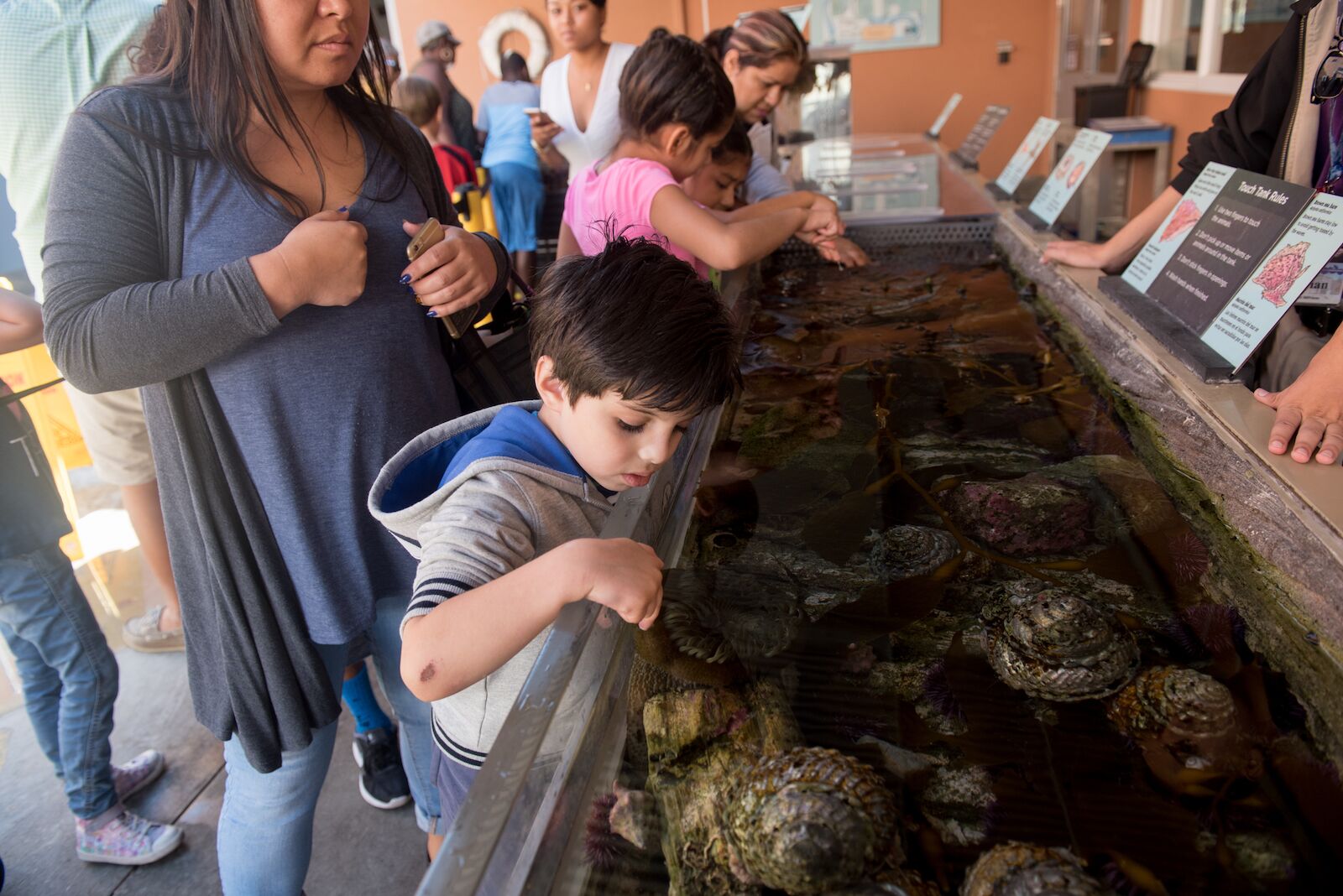 Rocky Shore is a close second to Kelp Forest in the Ecosystems gallery. In this exhibit, visitors can take an interactive approach to learning about sea life by gently handling species such as sea stars and anemones in the touch tank. Another activity lets visitors roleplay as rockbound barnacles by trying to catch “prey” that’s actually ping pong balls while stuck in one place.

If you have a little more time to dedicate to the Ecosystems gallery, the Desert Zone is not to be missed. You’ll see more wildlife here, from scorpions and Gila monster lizards to desert tortoises and fennec foxes, not to mention a number of cactus species. But the highlight of this exhibit has to be the flash flood simulator. Every few minutes, visitors can experience the intensity of a summer storm that might account for most of the rain a desert ecosystem sees in an entire year.

Underrated exhibits to check out at the California Science Center

After you’ve gotten up close and personal with the Endeavour space shuttle, Roth-Johnson advises visitors not to miss this photo exhibit on the second floor of the Creative World gallery. This exhibit traces Endeavour‘s move across the US, from Florida to California, after it was retired. Images capture various points along the journey, showing the space shuttle backdropped by cities and scenes all across the country, while oversized shuttle mission patches. Being surrounded by photos of Endeavour in all its glory right here on Earth almost makes you feel closer to the spacecraft than the physical shuttle.

Equal parts educational and exciting, this exhibit was created in partnership with the Children’s Burn Foundation to teach visitors about fire hazards, how to escape and extinguish household fires, wildfire preparedness, burn prevention, and more. With respect to the seriousness of the subject matter, the museum has found a way to make learning about fire fun and memorable, including live demos, scavenger hunts, and an interactive exhibit where guests roleplay as fire danger detectives.

What you can skip at the California Science Center

Between the museum’s six permanent exhibits, handful of special exhibitions, IMAX screenings, and educational programs, you’d be hard-pressed to see everything at the California Science Center in a single day. But what you choose to skip is up to you. As you’re browsing the website before your visit, take note of what doesn’t strike your fancy, as well as what does, and don’t feel pressured to prioritize the most popular exhibits just because they’re popular.

“If you aren’t interested in aquatic life, don’t go see the kelp forest,” says Roth-Johnson. “If there isn’t an IMAX film that catches your eye, don’t go there.”

This is particularly good advice considering how crowded the popular exhibits can get. There’s no use spending precious visiting time waiting to see Space Shuttle Endeavour if you’d rather get up-close and personal with a sea urchin at Rocky Shore.

What you didn’t know about the California Science Center

“Many people don’t know that we have free general admission!” Says Roth-Johnson. “And that we are open every day of the year but Thanksgiving, Christmas, and New Year’s Day.”

Parking is available on museum grounds for a fee: $15 until 5 PM and $18 after 5 PM. Look up the specifics of parking in Exposition Park before your visit.