Cape Cod, Massachusetts, a hook-shaped peninsula extending 70 miles into the Atlantic Ocean, is famous for being one of the Kennedys favorite vacation spots, but you don’t have to be rich or famous to enjoy the 500 miles of coastline of this peaceful corner of New England. Cape Cod is vast, and each of the 15 towns and their respective villages has a distinct sense of place and varied offerings for every type of traveler. This guide to all the Cape Cod towns will help you find your perfect fit, whether you’re looking for an upscale resort, an affordable Airbnb, or casual camping.

We hope you love the places we recommend! Just so you know, Matador may collect a small commission from the links on this page if you decide to book a stay.

Laid back Bourne, straddling both sides of the Cape Cod Canal, is the gateway to the peninsula. While most visitors pass through on their way to towns further afield, Bourne is worthy of a stop. Spend an afternoon in Buzzards Bay Park, a canal-side recreation area, to watch the constant parade of boats as they head out into Cape Cod Bay. 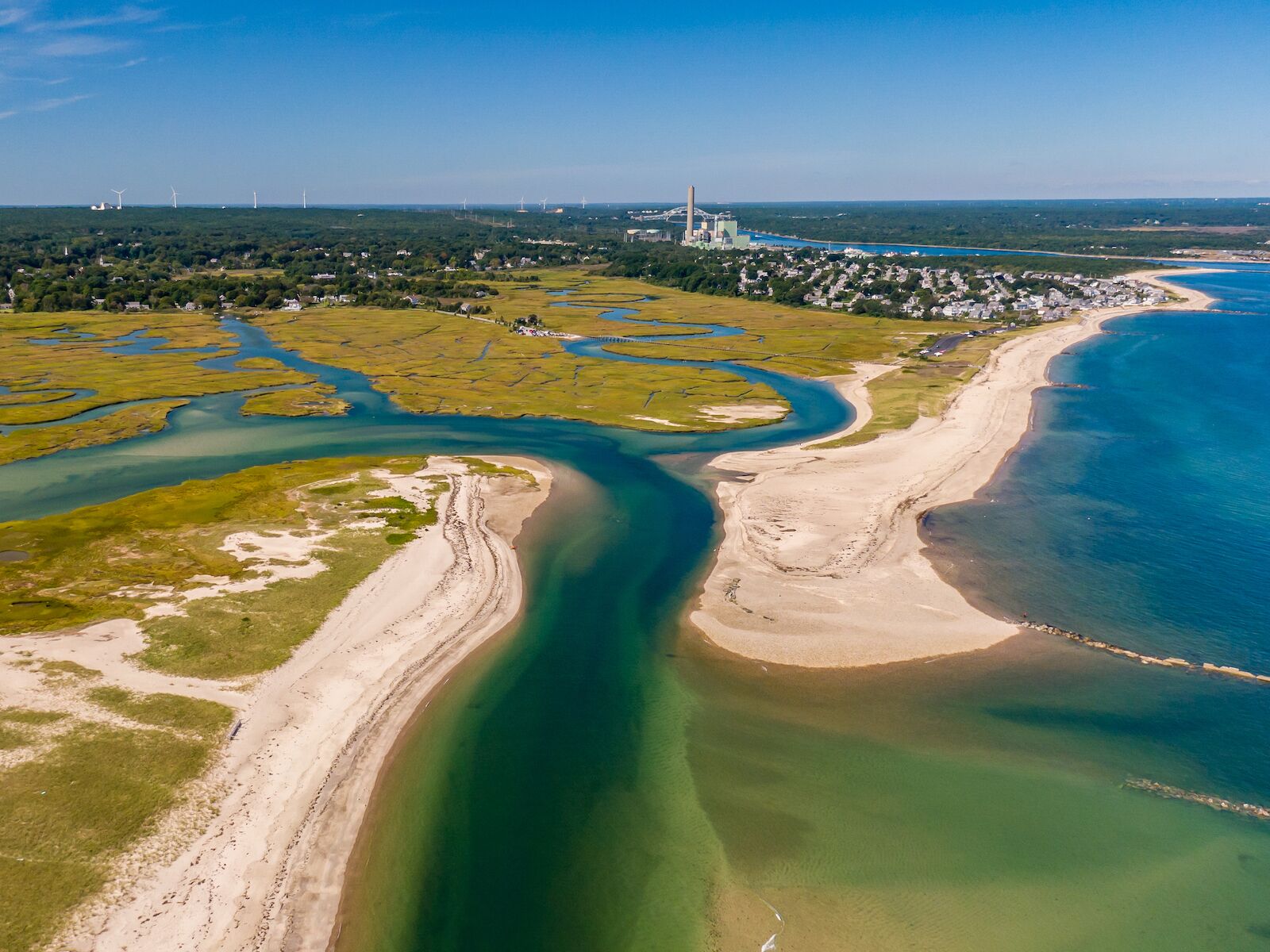 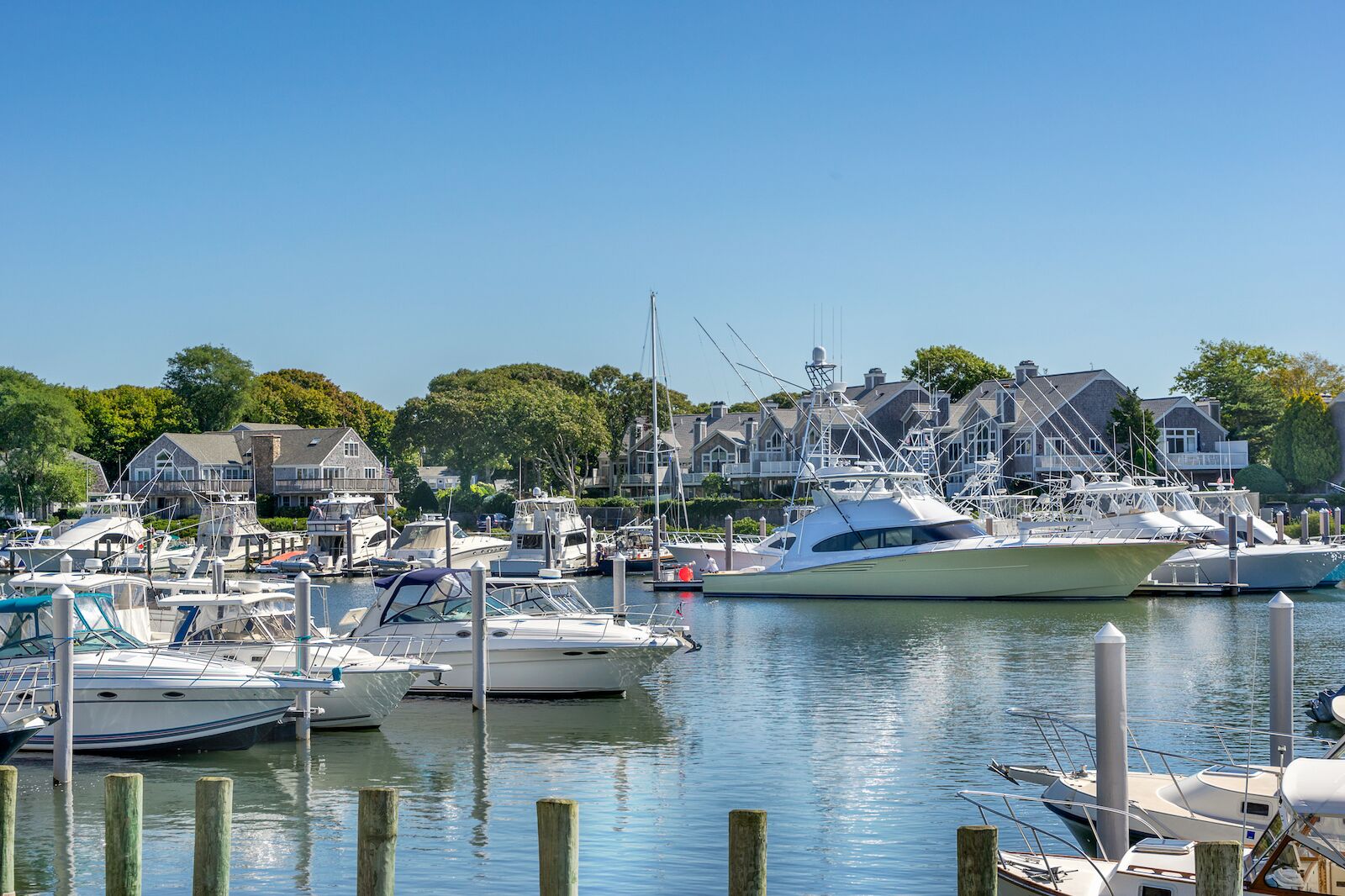 Falmouth is small-town Cape Cod at its best, with the distinct feel of a quaint college town due in part to The Woods Hole Oceanographic Institute. Stop by the Discovery Center on its historic harbor-front campus to learn about the institute’s crucial maritime research. In the evening, join the locals at west-facing Chapoquoit Beach for an impressive sunset over the open ocean. For dinner, reserve a table at The Glass Onion on Main Street. Be sure to order the lobster strudel, a mascarpone, and phyllo dough masterpiece in lobster butter sauce. For resort-style accommodation on a private stretch of sand, check in at the Sea Crest Beach Hotel. The ocean view rooms and suites have modern, coastal interiors. The resort even has an ice cream parlor – The Scoop, right next to the pool. AutoCamp, Cape Cod’s only glamping spot, offers guests options of beautifully appointed airstreams or luxury tents. The property sits alongside the Shining Sea Bike Path and is only a few minutes’ ride to downtown Woods Hole.

The town of Mashpee has the distinction of being the headquarters of the Mashpee Wampanoag tribe. Thousands of years before the English settlers arrived, the Wampanoag controlled what is now modern-day Massachusetts and Rhode Island. Visit the Mashpee Wampanoag Museum to learn about the history and culture of the federally recognized tribe. The town is also home to Mashpee Commons, a shopping and dining destination with over 100 businesses. Popular retail brands share space with markets and restaurants on a commercial property developed with a traditional Cape Cod esthetic. 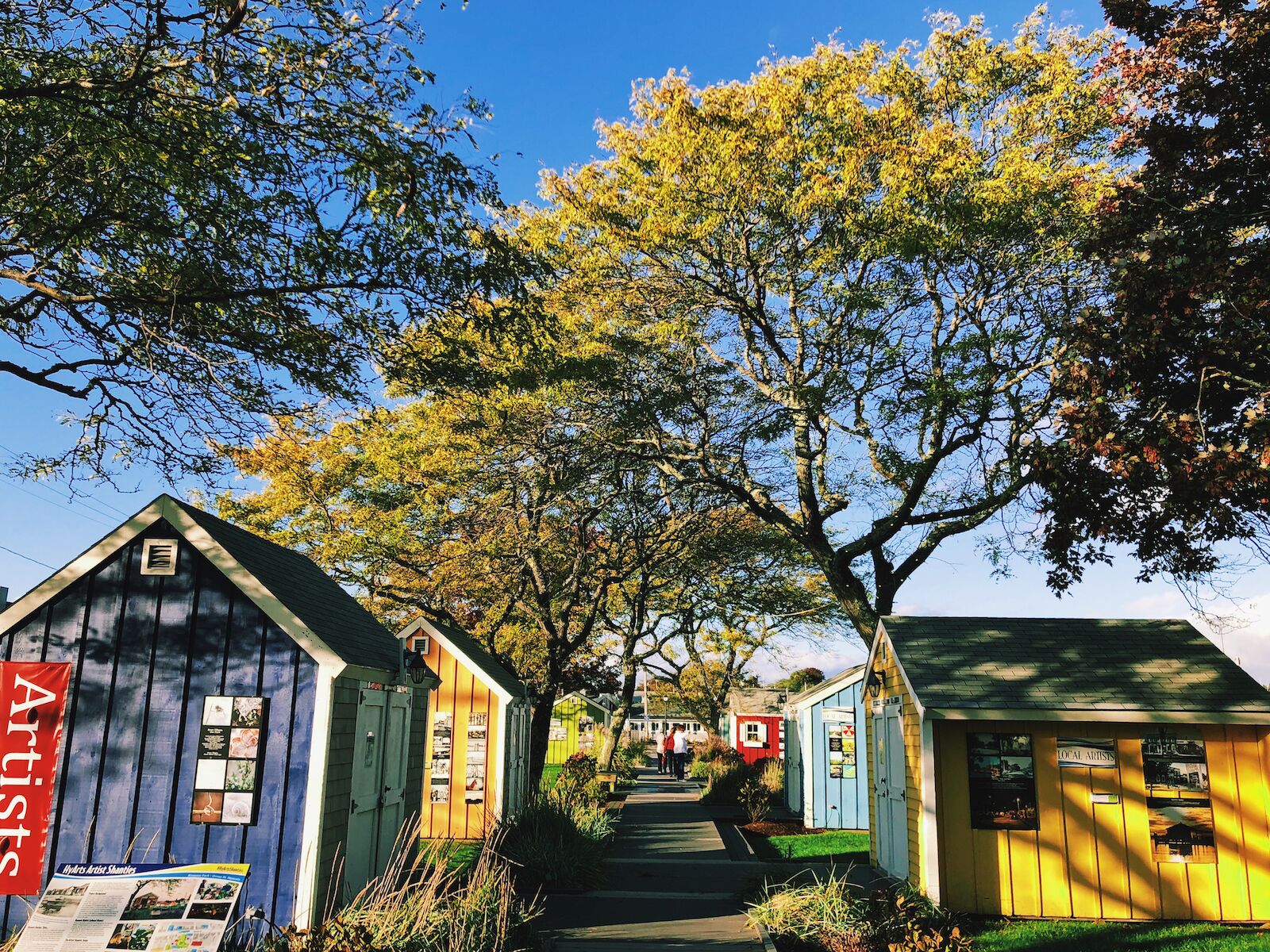 The largest of Cape Cod’s towns, Barnstable, is comprised of seven different villages. The most recognizable is Hyannis, home to the Kennedy family compound. Hyannis is also the commercial center of Cape Cod, where you’ll find the airport, ferry terminal, and many big box stores. But Barnstable isn’t all business. First, catch a performance at the Cape Cod Melody Tent, a theater that has hosted musical legends like Tony Bennett and Johnny Cash since its opening in 1951. Then, stroll through the charming village of Osterville on the Nantucket Sound for galleries, gift shops, and intimate dining. Five Bays Bistro on Main Street is a local favorite. Finally, for a traditional raw bar experience, The Naked Oyster in Hyannis is a must. The restaurant even has an oyster farm in Barnstable Harbor.

Yarmouth is one of the Cape’s more tranquil towns and is primarily residential. However, the numerous beaches and golf courses will keep outdoor enthusiasts busy. Bayberry Hills’ 27-hole golf course lures serious golfers, while Bass River’s course is perfect for players of all levels. Whydah Pirate Museum in West Yarmouth is a hit with the kids. 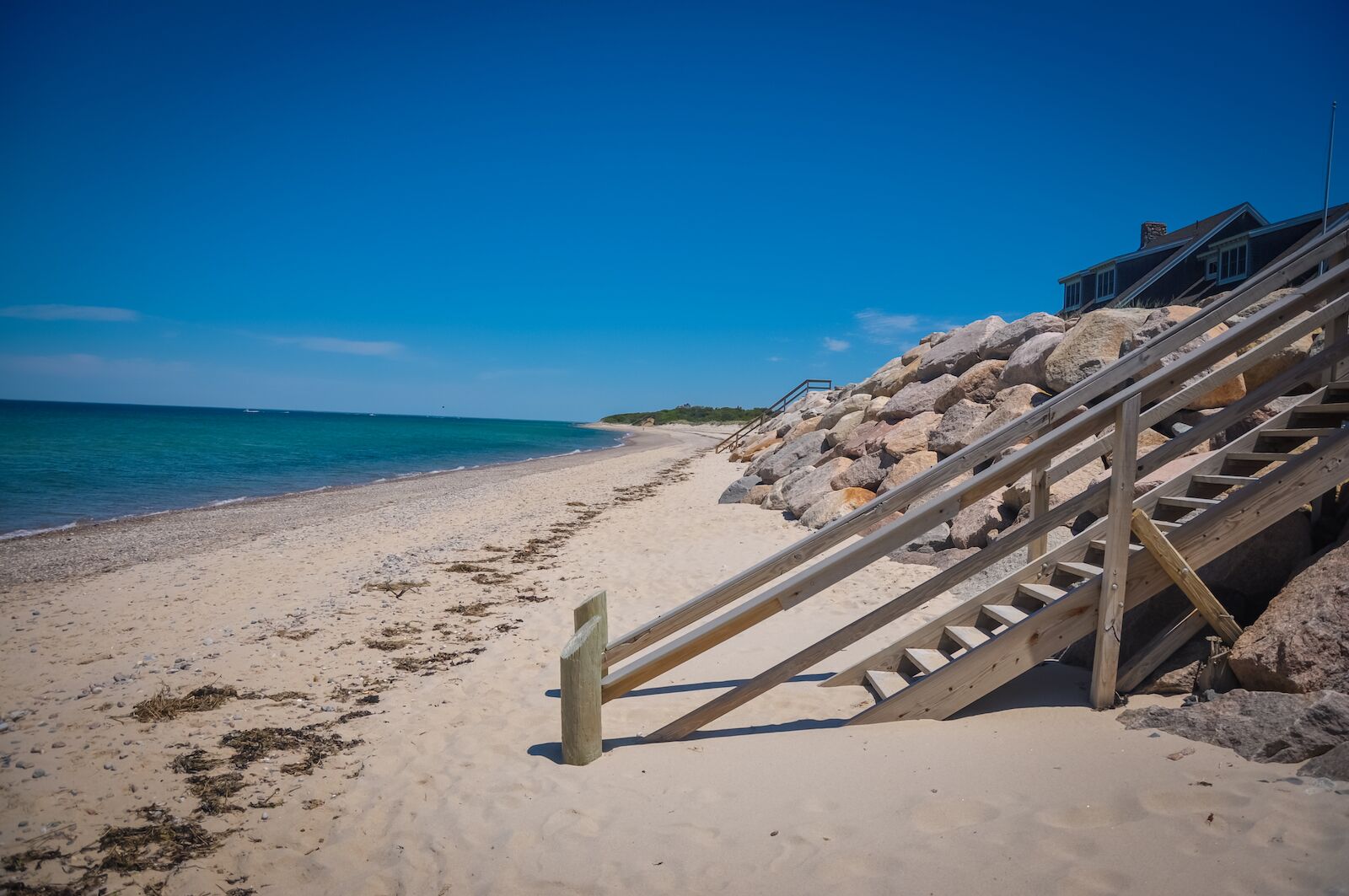 For such a small town, Dennis packs a lot in. It has multiple historic districts, 16 beaches, and two famous theaters. The Cape Playhouse, America’s oldest professional summer theater, is still wowing audiences today. Actors Henry Fonda and Bette Davis took to the historical stage in the early days of their careers. Just next door, the Cape Cinema has been screening films since its opening in 1930. Book a table at ENCORE Bistro on the Playhouse grounds pre-show. Or head to The Pheasant for a locally sourced menu in a farmhouse setting. You can’t go wrong with the day boat scallops served seared or crudo-style. 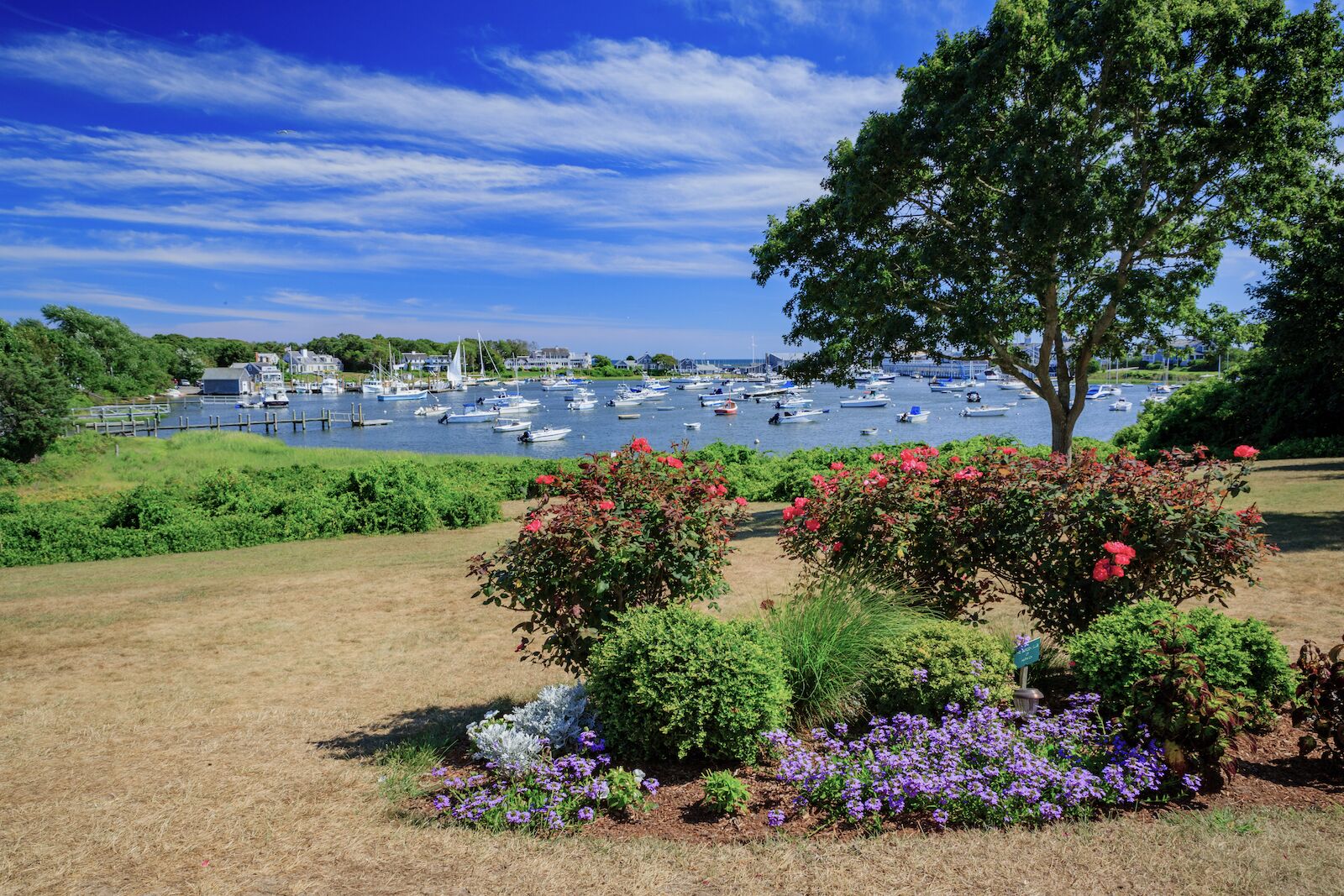 Harwich, the gateway to the lower Cape, has a little bit of everything. Vast beaches, hundreds of acres of hiking trails, and a lively port. Rent a bike and follow the Cape Cod Rail Trail to First Crush Winery for tastings and cheese plates. Cape Cod Lavender Farm and its 75 acres of conservancy land is the perfect respite when you’re ready for a break from the crowds. Visit in July to catch the harvest, and stop by the little gift shop for handmade lavender soaps and oils. Buca’s Tuscan Roadhouse is a perennial favorite, so book ahead for excellent Italian food. Or dine waterfront at Twenty-Eight Atlantic, Wequassett Resort and Golf Club‘s esteemed restaurant. If you’re looking for a beachfront retreat for a luxurious weekend, reserve a room at the resort and relax poolside in your private cabana. 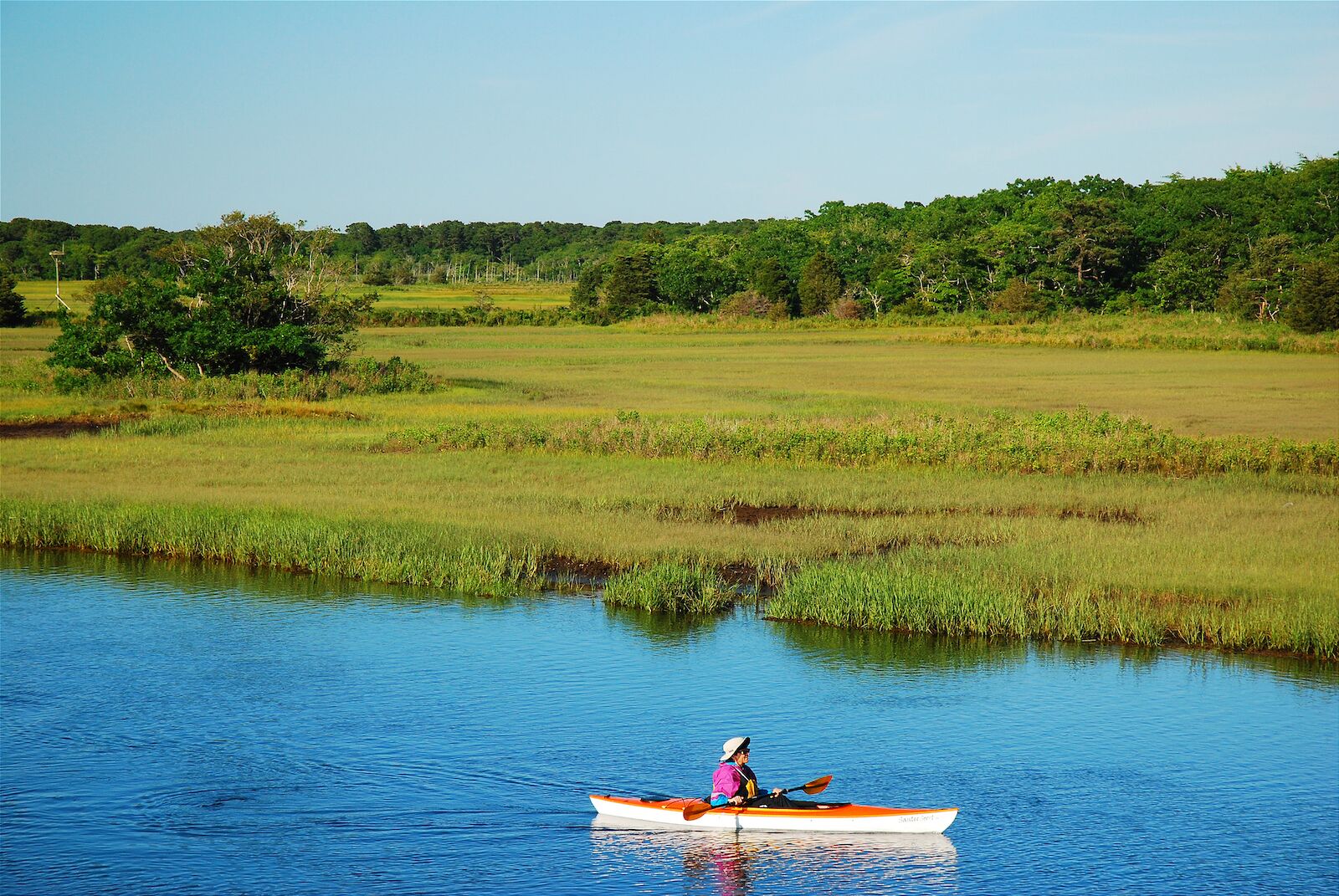 Brewster is one of the more laid-back and nature-focused Cape Cod towns. Head to Crosby Landing to see the famous Brewster Flats, a tidal phenomenon that exposes over a mile of sandbar in Cape Cod Bay twice daily. Brewster is also home to the Cape Cod Museum of Natural History. Stop in to see its impressive aquarium and explore the miles of nature trails surrounding the property. 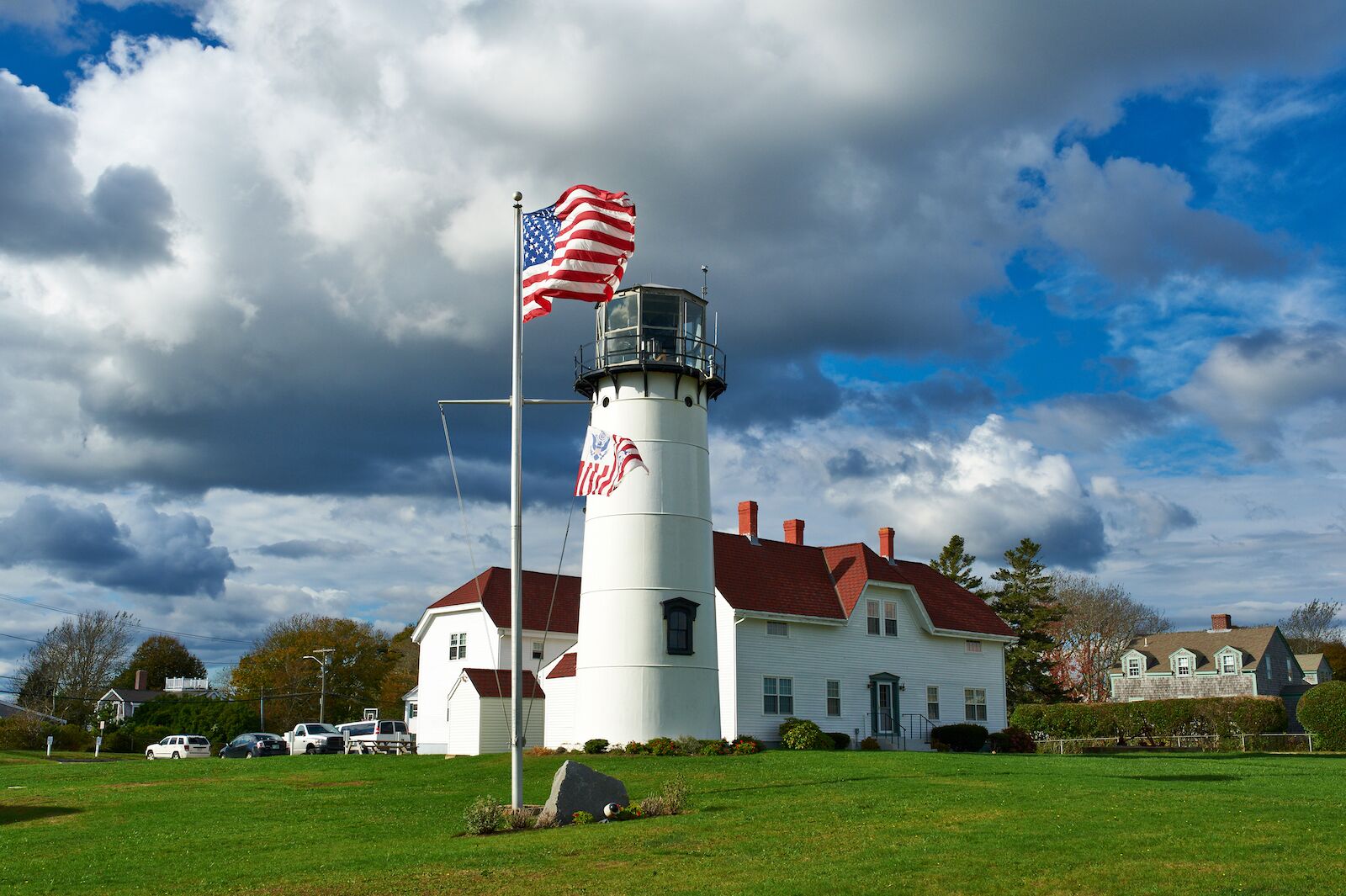 Chatham remains one of the most popular Cape Cod towns, thanks to its bustling historic Main Street lined with boutiques, galleries, and restaurants. A quick 10-minute stroll from downtown leads to Lighthouse Beach, a vast stretch of golden sand backed by the picturesque Chatham lighthouse. For sundowners overlooking Chatham’s harbor, secure an Adirondack chair on the terrace of the iconic Chatham Bars Inn. This grand dame of Chatham hotels has luxury rooms, an oceanfront pool, and a private beach. Book a table at Stars, the hotel’s formal dining room, for modern, coastal cuisine cooked with fresh ingredients from its farm. Located on a quiet stretch of Main Street, The Chatham Inn is Cape Cod’s only Relais and Chateaux property. The intimate, stylish bed and breakfast is also home to one of Cape Cod’s top restaurants, Cuvee. For a change of scene, head over to The Chatham Squire, an institution in this small town for clam chowder and oysters. After dinner, check out its next-door tavern for drinks and live entertainment.

Orleans is a peaceful and unpretentious corner of Cape Cod. The laidback arts and shopping district makes a great stop along the Cape Cod Rail Trail bike path for ice cream at Emack and Bolio’s. Or grab a picnic at Cottage Street Bakery and head to nearby Nauset Beach, a 10-mile stretch of sand for lounging, swimming, and surfing. 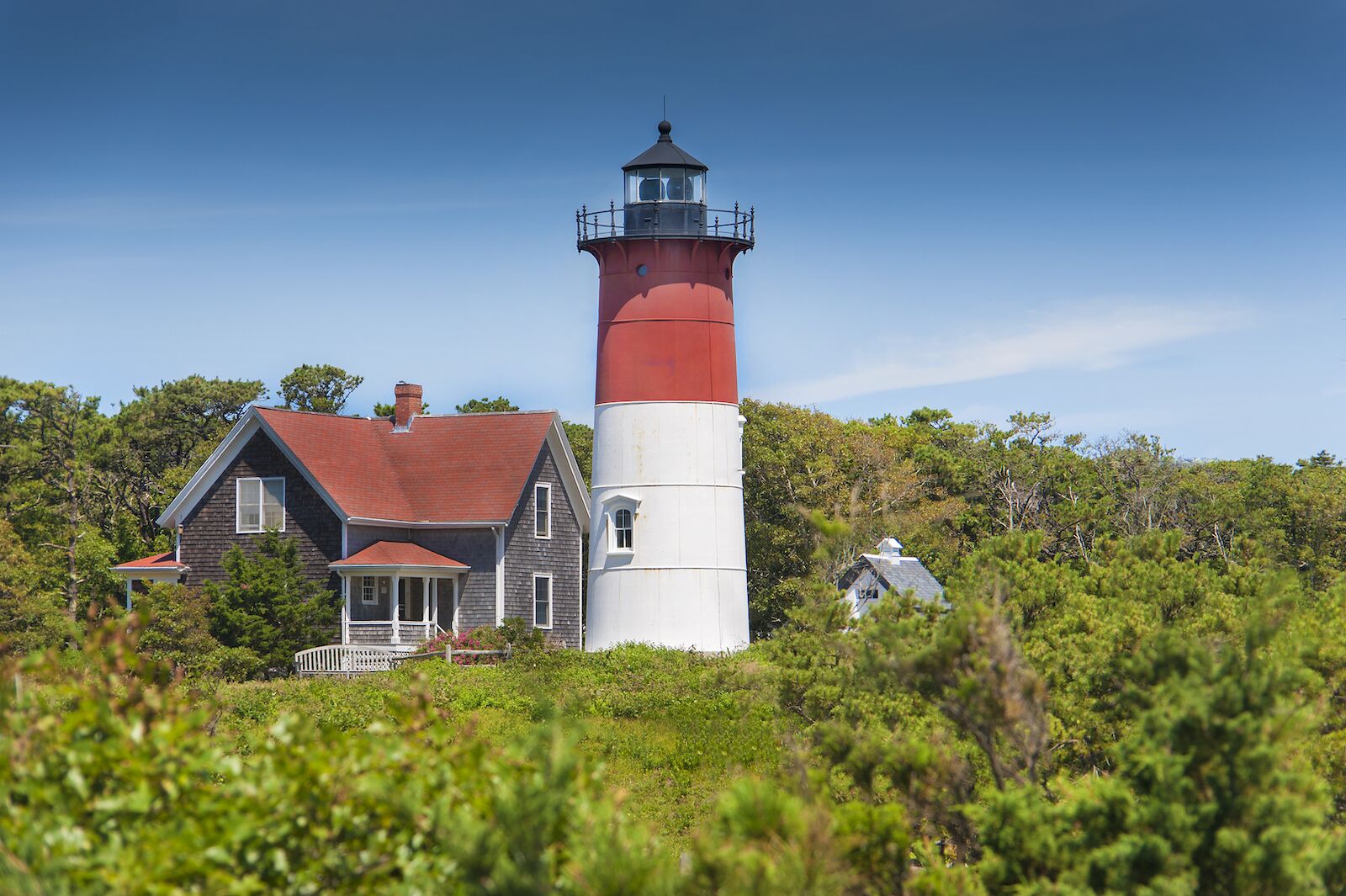 Eastham marks the beginning of the Cape Cod National Seashore, a 40-mile stretch of beach along the Atlantic. Beautiful Nauset Light Beach facing the open ocean, is popular with surfers and boogie boarders. Take a tour of the old Nauset Lighthouse, then stop by the Salt Pond Visitor Center for trail maps and some history of the national park. 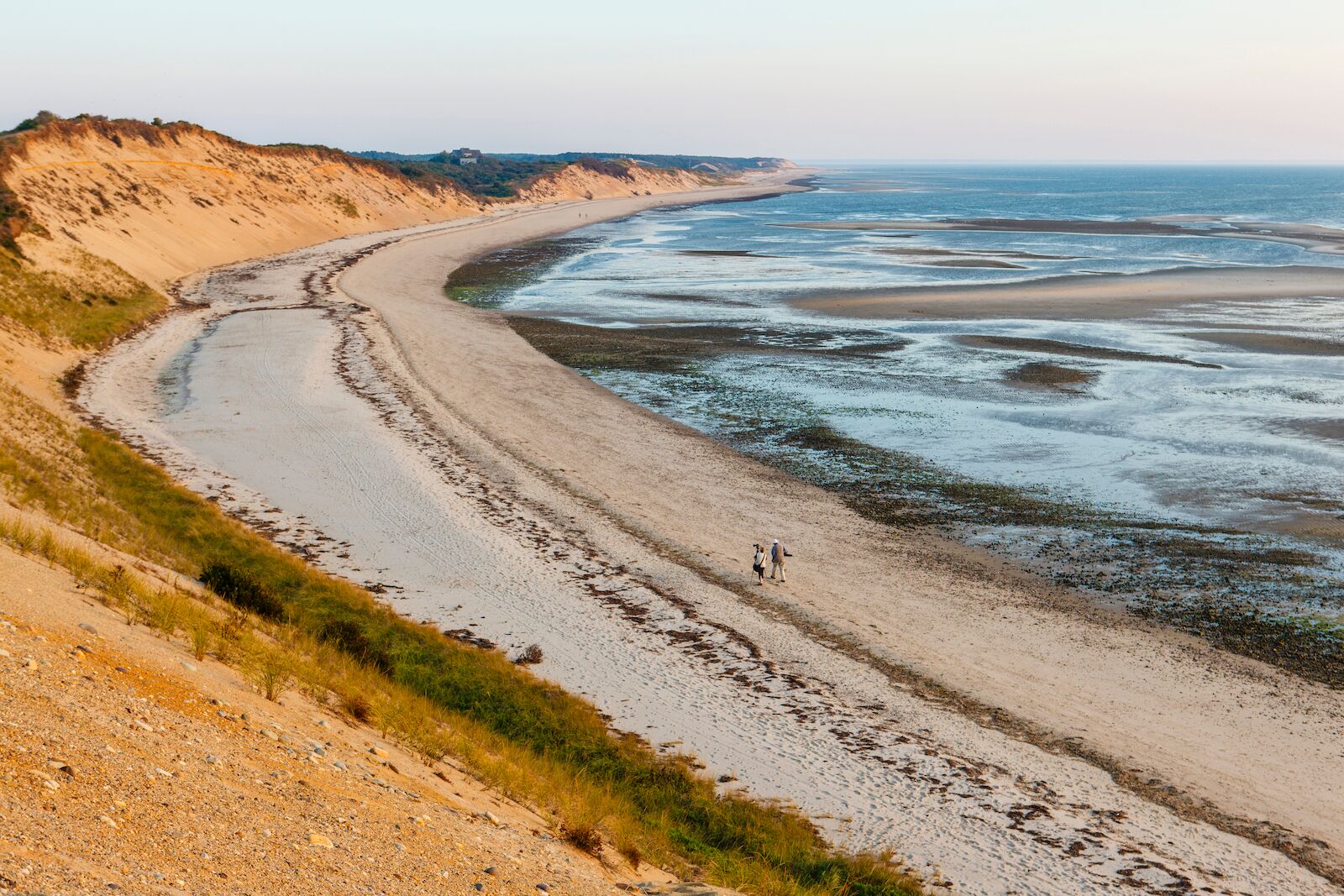 Wellfleet’s OysterFest, held every October for the past 20 years, has put this small Cape Cod town on the map. Aside from the famed mollusks, Wellfleet’s homey feel draws visitors to this outer Cape community each summer. Explore the beaches of the National Seashore or the freshwater kettle ponds that dot the area. Make sure to reserve tickets to Wellfleet’s Drive-In Theater, a historic cinema that dates back to the 1950s. 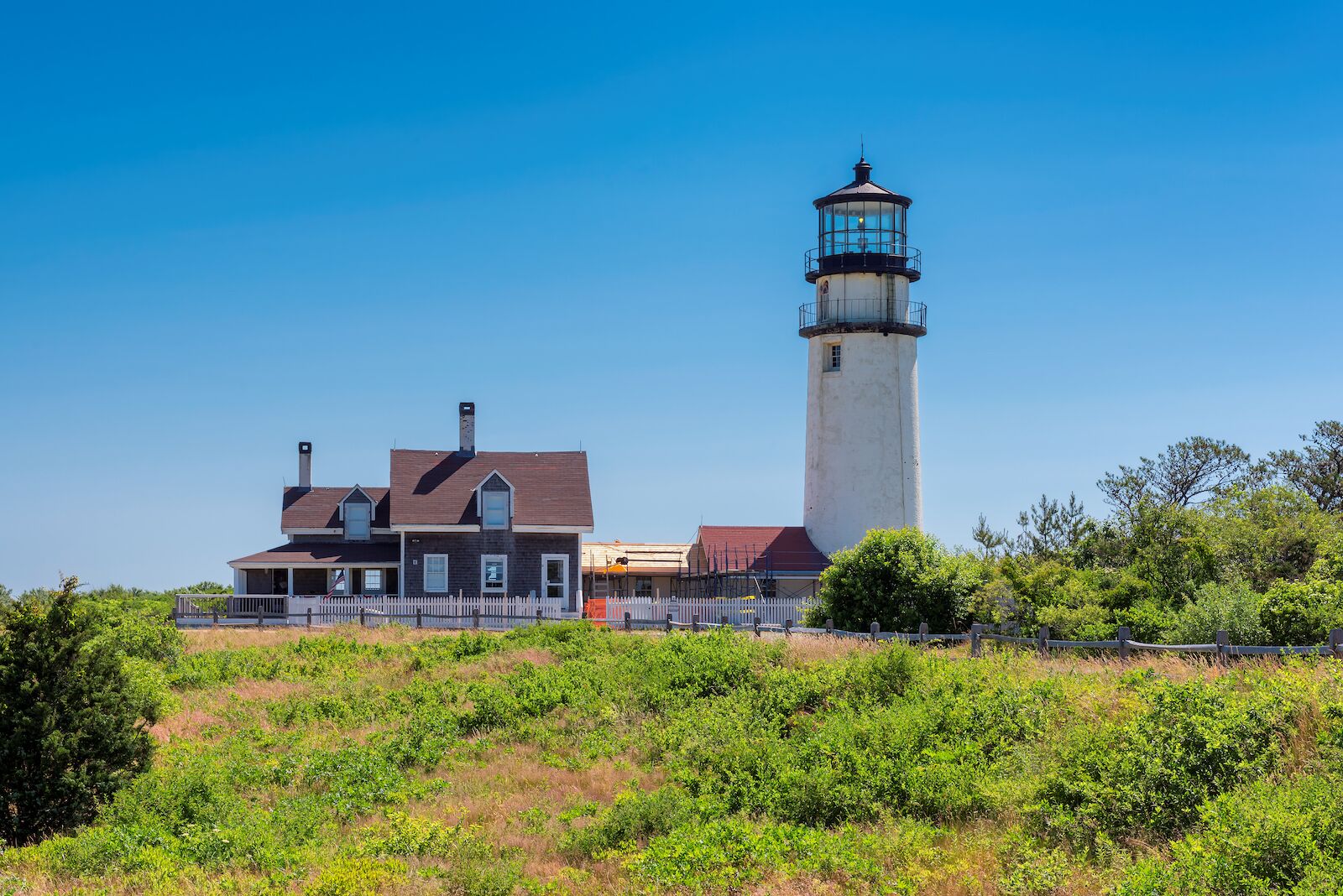 Wild and windswept, Truro is the outer Cape’s hinterland where people go to get away from it all. The dune-backed beaches and downtown Truro have long inspired artists, including American painter Edward Hopper. Spend an afternoon at Truro Vineyards. The winemaking family welcomes visitors for tastings and tours. Or enjoy a glass and small bites from Blackfish Restaurant’s Crush Pad Food Truck while relaxing on the vineyard’s front lawn. 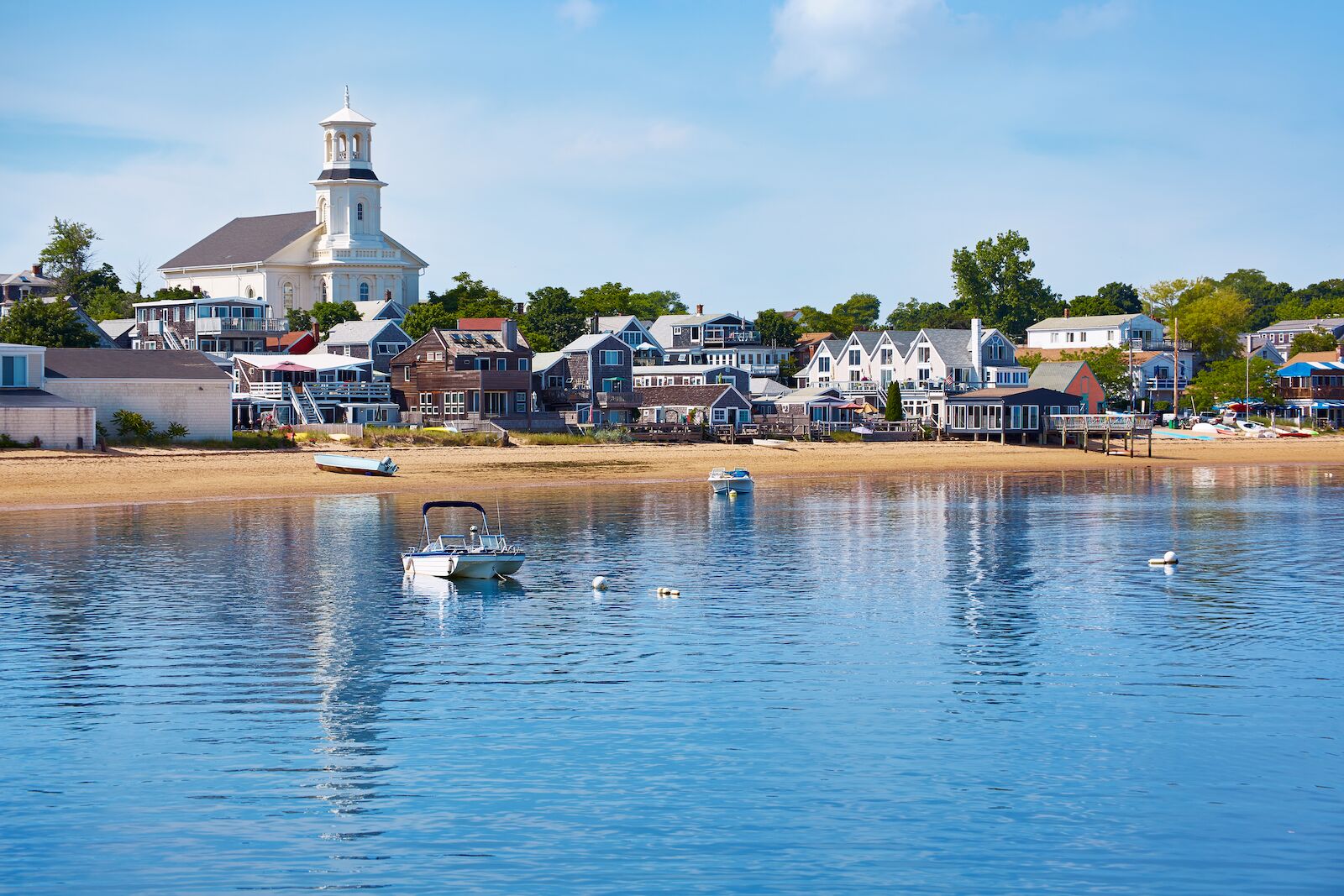 Provincetown is without question the liveliest of the Cape Cod towns. An LGBTQ+ – friendly destination, P-town, as it’s known locally, is also the oldest continuous artist colony in the United States. Festivals and parades are a part of everyday life, including a raucous Fourth of July celebration, an August Carnival, and Women’s Week in October. Beaches stretch for miles on the wild Atlantic and swimmer-friendly Cape Cod Bay. No one goes hungry in Provincetown. The Lobster Pot is immediately recognizable by its neon lobster-shaped sign. Sit for a relaxed seafood feast at this historic P-town institution overlooking the harbor. Or, head to Mac’s Fish House for excellent sushi and craft cocktails at its beachside bar. The Inn at Cook Street is one of Provincetown’s most loved accommodations. Located in the East End gallery district, the homey yet elegant inn is a short walk from downtown and just steps to the beach.