Rum often gets a bad rap. Blame it on the less than optimal circumstances of an overly sweet and poorly concocted Mai Tai, or from the displeasure of consuming an artificially flavored rum that did not sit well (or stay for a long time). Yet as the craft distilling movement continues to boom and evolve, and as contemporary imbibers become increasingly educated, rum is finally getting a second chance. With that second chance, producers are able to innovate and take the spirit category to new depths — in one distillery’s case, literally.

Cayman Spirits Co. in Grand Cayman makes a rum that’s aged in the ocean at a depth of seven fathoms (approximately 42 feet). It’s named, appropriately, Seven Fathoms Rum. This Caymanian rum is the first, and only, rum in the world to be aged in the ocean — a feat that, as you can imagine, is not easily executed and takes a certain level of expertise to perfect.

“Early on, we were reading stories about ‘ocean rum’ which is rum that had literally crossed the ocean in barrels on ships,” Walker Romanica, owner of Cayman Spirits Co., says. “Those barrels had aged better than their counterparts onshore. To this day, distilleries use this same concept of ‘agitation’ to enhance the aging, we just thought of going back to the sea and using what we have available to us here on our doorstep in Cayman, the pristine Caribbean sea!”

When a spirit inside of a barrel is agitated by subtle movements, different parts of the liquor come in contact with the wood. This imparts more of the oak flavors faster than if a barrel were sitting stock still in a warehouse. In terms of taste, this means a spirit that’s been aging for less time in an agitated environment will have a similar oak influence to one that’s been aging in a still environment.

There are other companies that use the ocean’s motion to influence the taste of alcohol. Linie, a Norwegian aquavit, puts its liquor on a journey around the equator by ship. Jefferson’s Bourbon aged barrels of its Ocean whiskey for three and a half years on an ocean research vessel. Leclerc Briant aged bottles of its Cuvée Abyss in the ocean. Aging barrels of rum far underneath the surface and using the tides as the source of agitation, however, is special to Cayman Spirits Co.

It’s no small feat. The logistics involve partnering with a local dive company to ensure that the barreled rum is safely secured at the depth of seven fathoms. Each barrel is slightly buoyant, Romanica says, so they float to a depth of 42 feet after being attached to a mooring line on the ocean floor. It takes a special relationship with local divers to keep the aging process going, one reason why few other distilleries have attempted this method of aging.

While Seven Fathoms Rum is objectively appealing because of its aging method, there are also a couple of genuine benefits to the concept. First off, the angel’s share (the percentage of spirit that is lost year over year due to evaporation) is mitigated by the insulation of seawater. To put it simply, whatever volume of rum that is barreled to age will be kept without any loss (which is typically 2 percent of the volume per year on average). The other benefit is related to flavor, as the light oceanic agitation lends a delicate salinity to the rum’s profile. Notes of vanilla, bread pudding, mocha, and sea-salted caramel are a few of the standout flavors of this rich sipping rum. 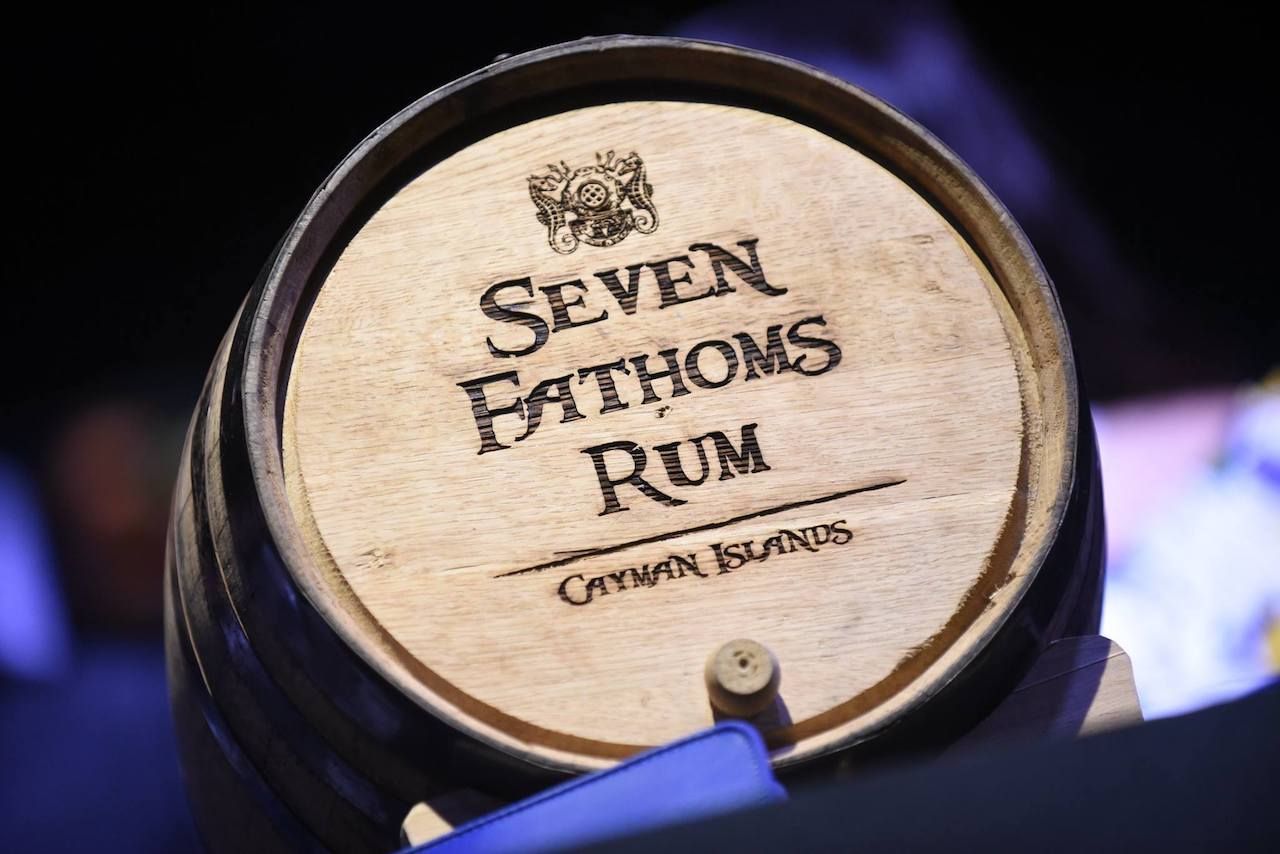 Cayman Spirits Co. has been making Seven Fathoms for around a decade, making it somewhat ahead of the curve in the current list of businesses innovating rum. All sorts of new rums are coming into vogue, as well as a robust second-hand market for rare rums similar to the one started by avid whiskey collectors. With the emergence of this new wave of craft rums, innovation has been inevitable for rums to differentiate themselves from the rest of the bunch: Copalli Rum from Belize leans into sustainability by using its own sourced canopy water from its estate; Plantation’s pineapple rum uses the flesh and rinds of fresh Victorian pineapples during distillation and maceration to garner the true essence of pineapple in its rum. Still, rum under the ocean is unique to Cayman Spirits Co.

Before sending barrels to the bottom of the ocean, however, Cayman Spirits Co. had to deal with a bit of bureaucratic red tape that dictates what can and can’t be done in terms of aging and spirits production. It is the only distillery on the 102-square-mile island, and largely helped write the rules.

“To open a distillery in the Cayman Islands requires approval from the Department of Health, the Department of Environmental Health, the Planning Department, Building Control, the Fire Department, and more,” Romanica says. “All of these entities had never seen a distillery apply before so there were no set rules. We actually helped by commissioning a former fire chief from a distillery district in the US to provide a study on what the policies should be. It was generally an amalgamation of the American or the British rules, whichever were stricter. The entire process took more than two years, and required us to build a lot of extras to satisfy everyone, but we were able to finally get it built and start making rum.”

Though you can buy Seven Fathoms on the Cayman Islands and from retailers in the US, few experiences match drinking it on site at the distillery (you won’t, however, see where it’s aged as that’s a secret location). A man by the name of Moises is the ringleader for many of the distillery tours, and if you visit, you’ll quickly learn who he is. It’s nearly impossible to not have a memorable experience at the distillery, and tasting a rum that was aged in the ocean is just about as Caymanian as it gets.

Would You Live Here?

Studying Medicine in the Caribbean