Nothing feels more like summer than spending weekends at the beach, the smell of sunscreen and saltwater lingering in your nose long after the days have turned cold. What can also linger is the debt you rack up trying to pay for a beach vacation, as hotel, food, and drink prices in top beach destinations can be seriously jacked up. But believe it or not, there are still some beach towns that won’t dredge your bank account. To help you find those cheap slices of paradise, Homes.com took a survey of nightly rental prices in almost 50 coastal destinations around the country, and found a dozen that you can actually afford. 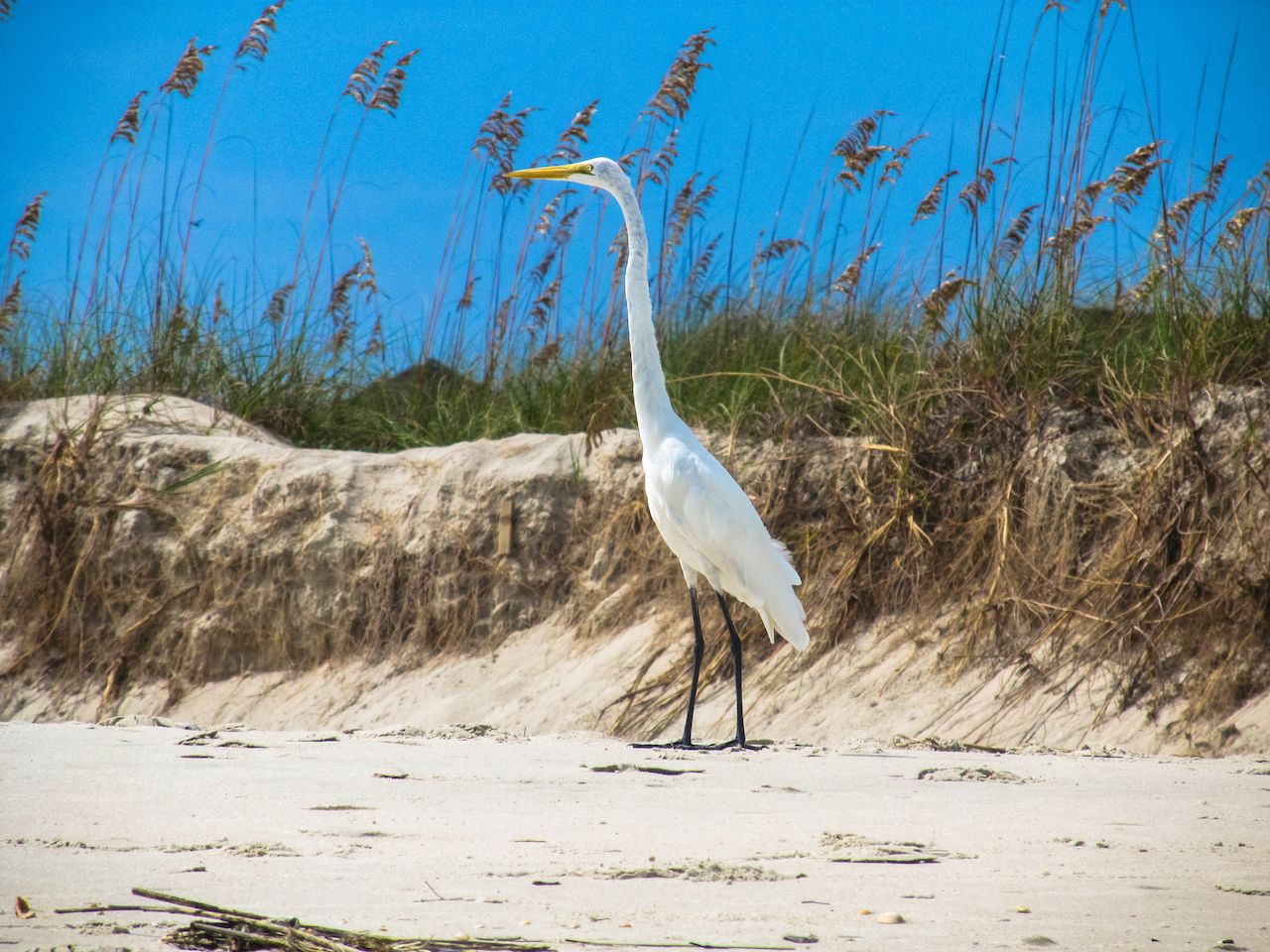 About half an hour up the grand strand from the affordable-vacation paradise of Myrtle Beach you’ll find Cherry Grove, an even more affordable alternative with a fraction of the crowds. Here you can meander up the 1,000-foot pier, where fishermen have been known to snag sharks and other sea giants without ever having to step foot on a boat. If you do want to get out on the water, there’s no shortage of fishing charters, as well as kayaking and paddleboarding through the inland swamps. You can also feast on all the fresh seafood at spots like The Shack and Duffy Street Seafood in nearby North Myrtle Beach. You’re also only a few minutes from literally dozens of golf courses, if laying in the sand and eating isn’t active enough. 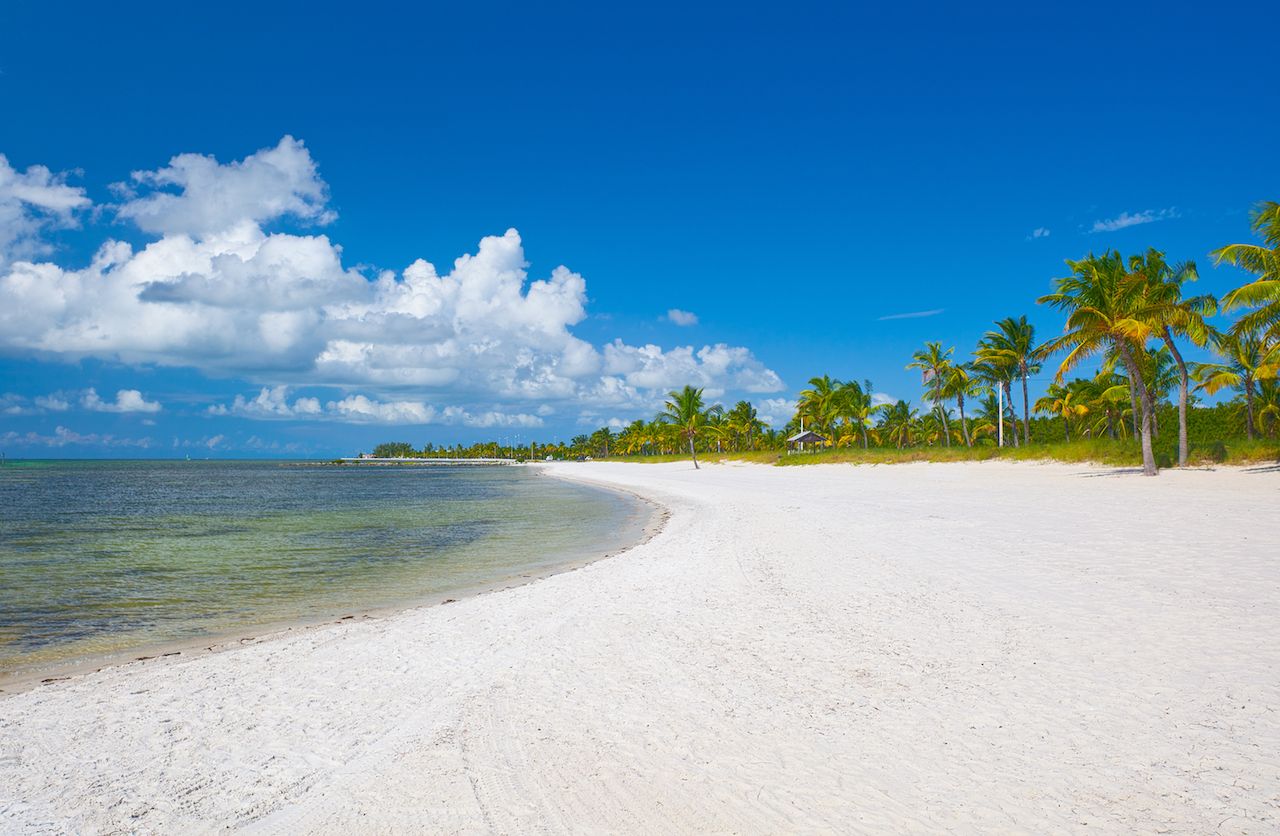 The beaches along Siesta Key are regulars atop Dr. Beach’s vaunted “Best Beaches in the World” rankings, and for good reason. The soft, powdery sand and turquoise water make the rest of beach-heavy Florida jealous, with soft waves perfect for kayaking, paddleboarding, or just going for a swim in the ocean. The beaches are right off Sarasota, too, with all the restaurants of St. Armands Circle and the Ringling Circus Museum only a short drive away. The clear waters offer perfect snorkeling conditions at Crescent and Turtle beaches. And on Sundays, you can take in the belly dancing and sword balancing at the Siesta Key Drum Circle — or join in the performance yourself! 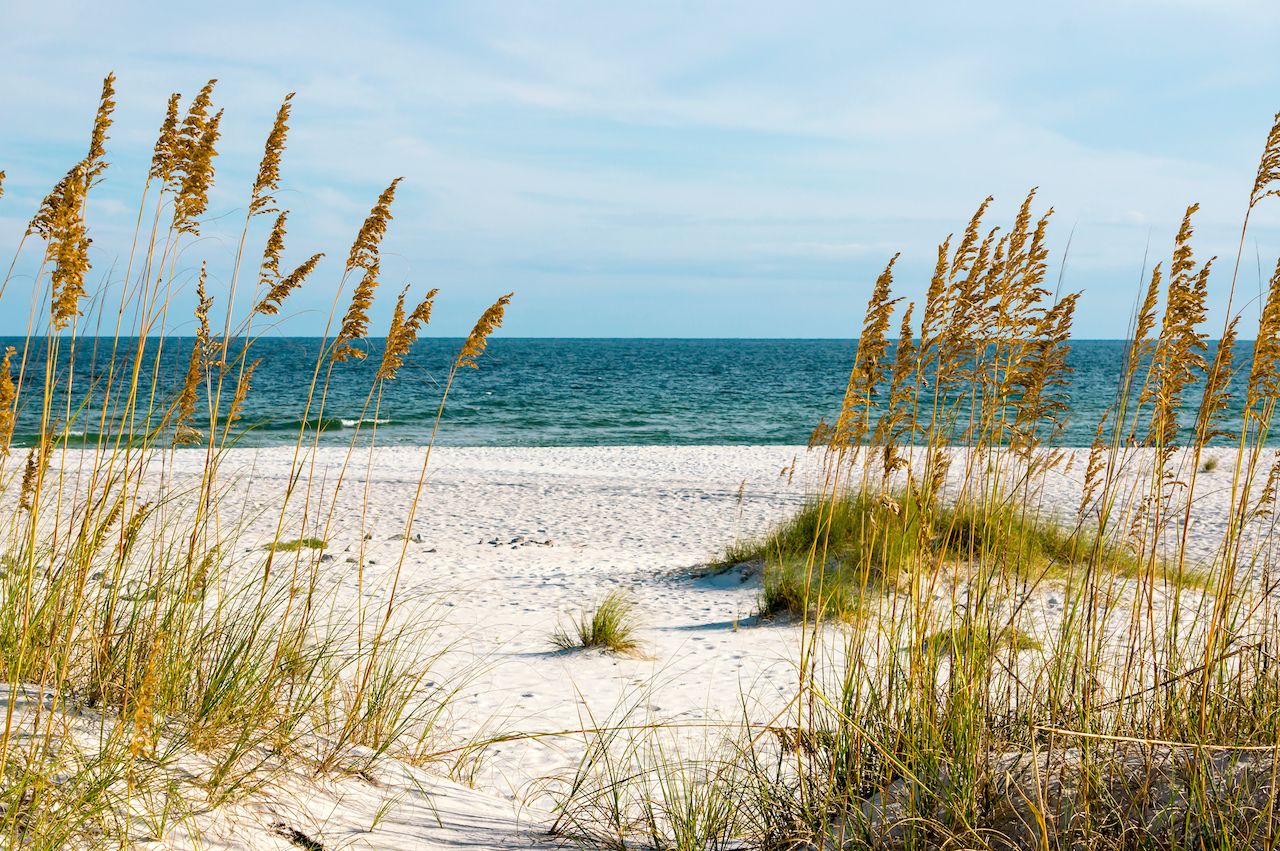 Few people from outside the South know Alabama’s Gulf Coast has beaches every bit as tranquil and picturesque as its neighbors in Florida. That’s why this colorful little beach town about 45 minutes west of Pensacola is able to stay so affordable. In addition to playing host to the Hangout Music Festival, Gulf Shores is also home to Gulf State Park, where 28 miles of bike trails take you through some of the best beachside wilderness in the southeast. Inside the park, you’ll also find the gleaming new Lodge at Gulf State Park, where modern waterfront rooms sit over a restaurant where you’ll dine to the sound of lapping waves. In town, be sure to hit Big Beach Brewing to cool off, and visit America’s best small-town zoo at the Alabama Gulf Coast Zoo. 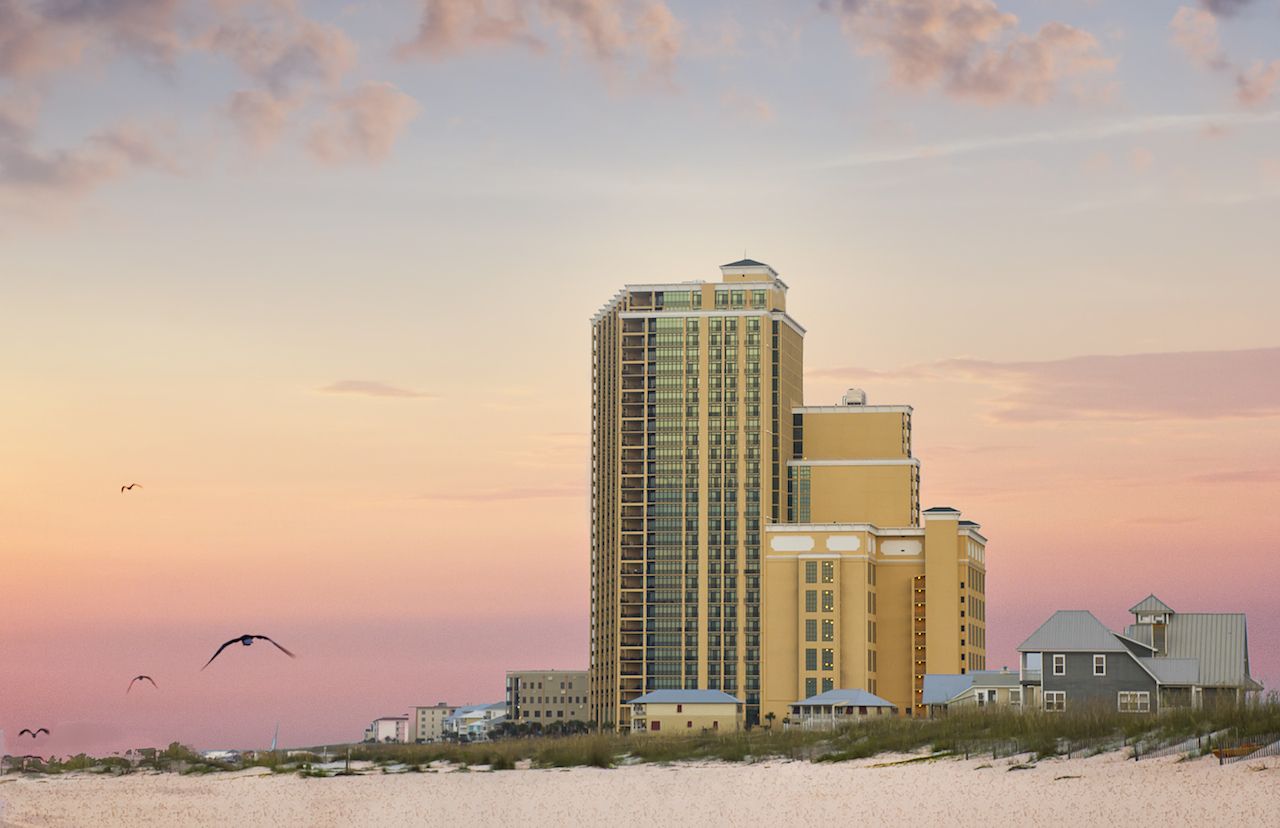 Just down Highway 182 from Gulf Shores you’ll find Orange Beach, with all the nature and a slightly more upscale vibe. Orange Beach is home to The Wharf, a sprawling dining and entertainment complex that’s played host to the World Food Championships on multiple occasions. After you’ve taken in a panoramic view of the coast from the top of its Ferris wheel, check out some of the restaurants that have made Orange Beach one of the best dining destinations on the Gulf Coast. Anchor Bar and Grill sits right on Hudson Marina and offers ramped up bar food like wagyu short rib tater tots and yellow sriracha buffalo wings. Or stay at The Wharf and try new spots like Yo Ho Rum & Tacos and The Bling Tiger. 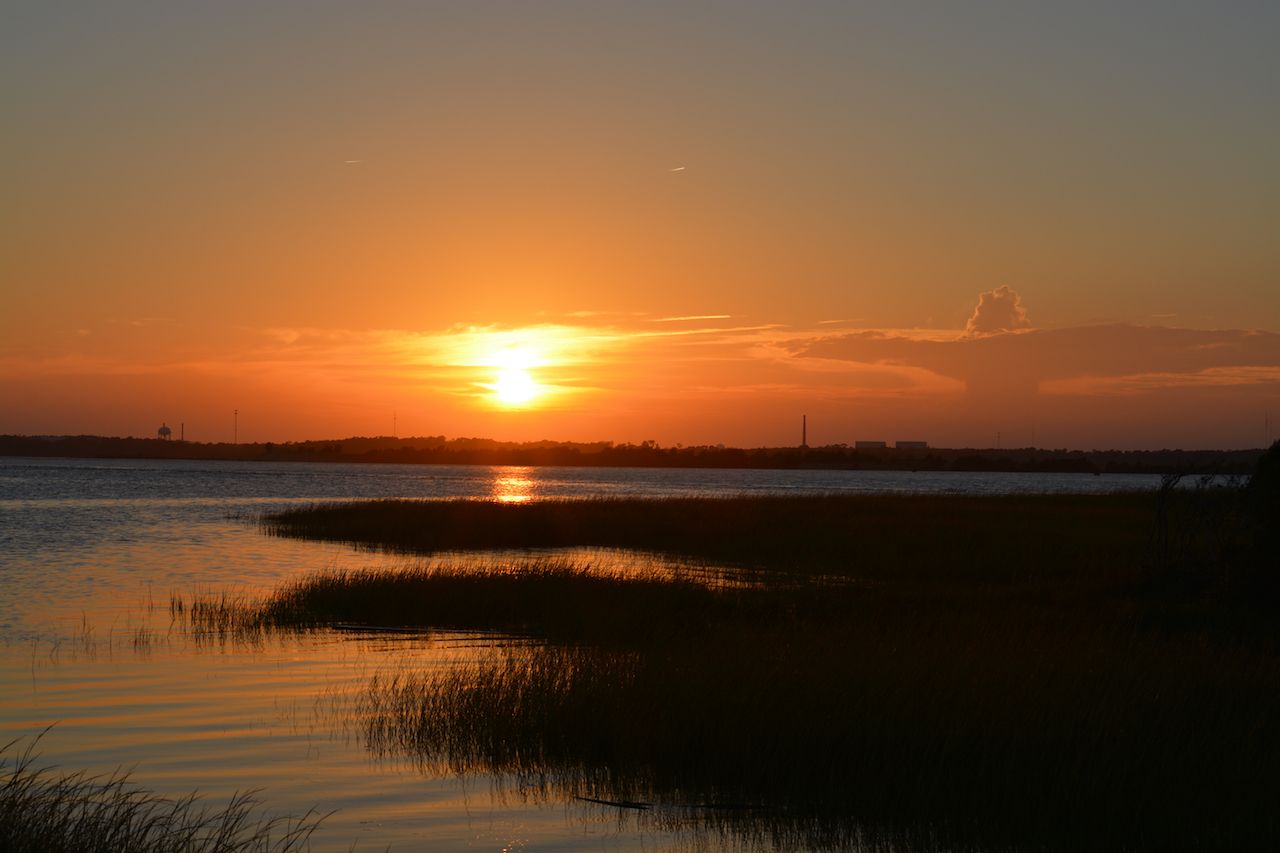 The least known of the Wilmington-area beaches, Carolina Beach still boasts miles of beautiful white sand where you’re welcome to bring a Jeep and your dog and camp out overnight. If you’d rather limit your beach time to daylight hours, hike the sandy trails at Carolina Beach State Park, culminating in a relaxing overlook above the Cape Fear River. No trip to Carolina Beach is complete without stopping at Britt’s Donuts, a destination breakfast spot for Wilmington locals. And be sure to enjoy a sandwich and a rum drink at the SeaWich restaurant and tiki bar, about as close to a Polynesian vacation as you’ll get in the Carolinas. 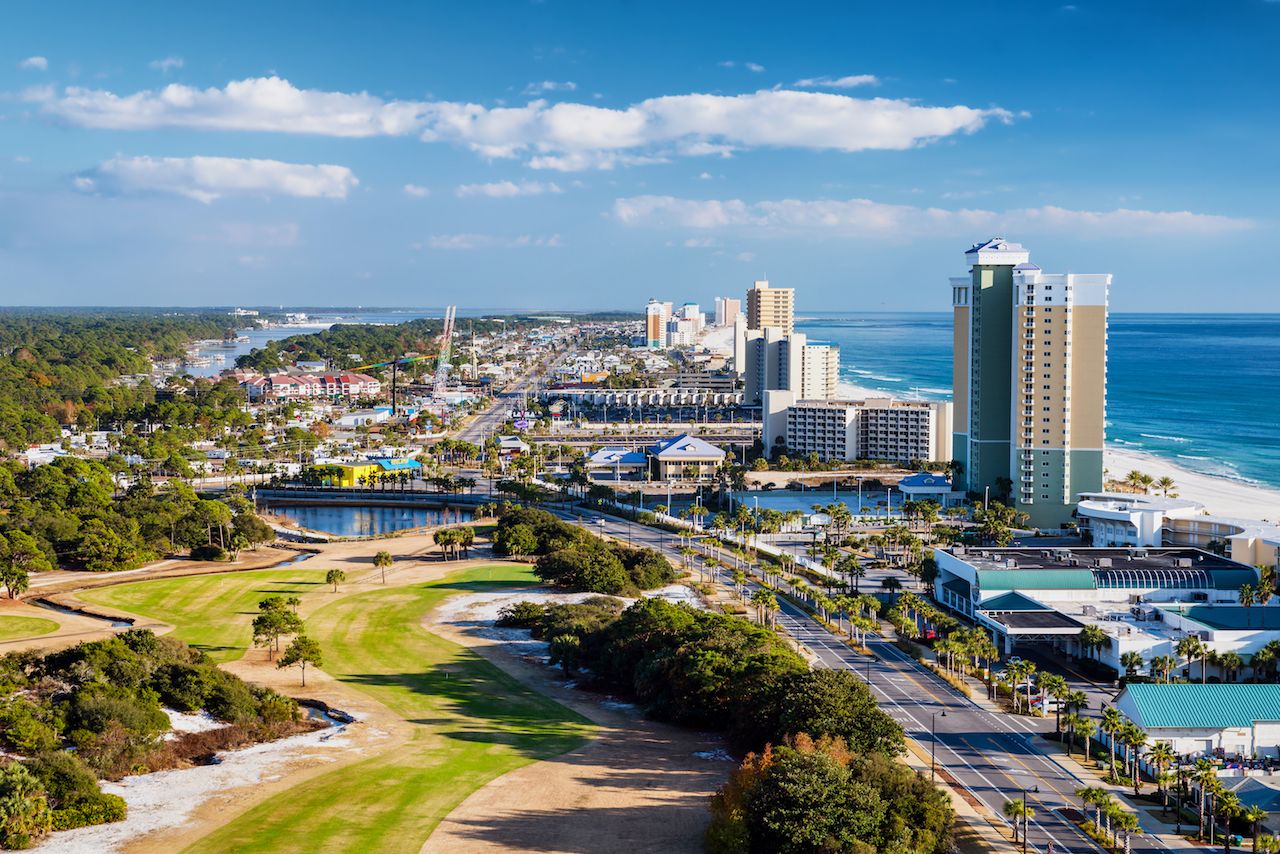 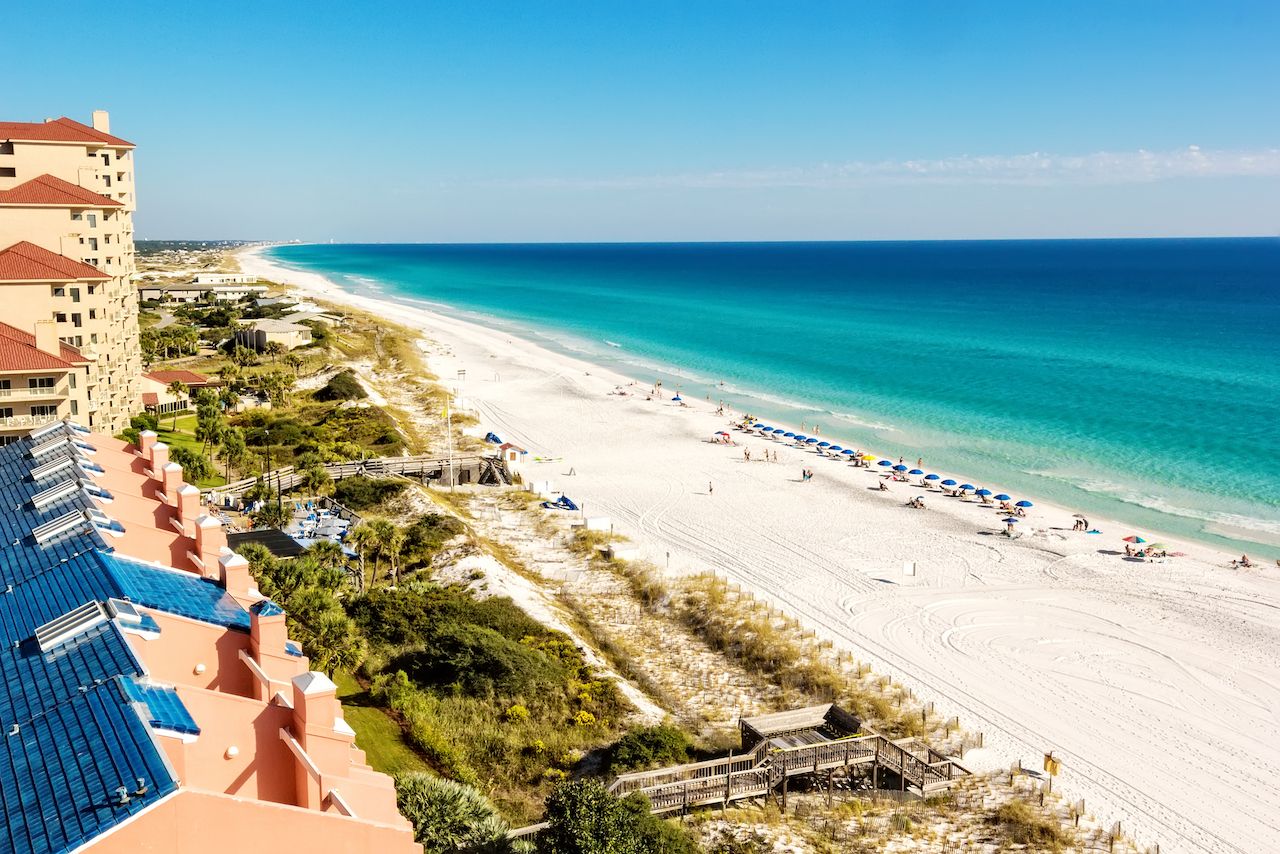 South Walton Beach might be the most underrated beach destination in Florida, a place that a handful of vacationing Southerners know yet remains anonymous to most of America. It has the same pristine sand and turquoise water of your Florida fantasies, but remains far less overdeveloped and tourist-clogged than the rest of the state. It’s also a fantastic place to go shopping, with one of the largest outlet malls in the nation at Silver Sands. Miramar Beach also offers surprisingly diverse culinary offerings with everything from Southern barbecue at Lillie’s Q to Asian fusion at Thai Elephant. 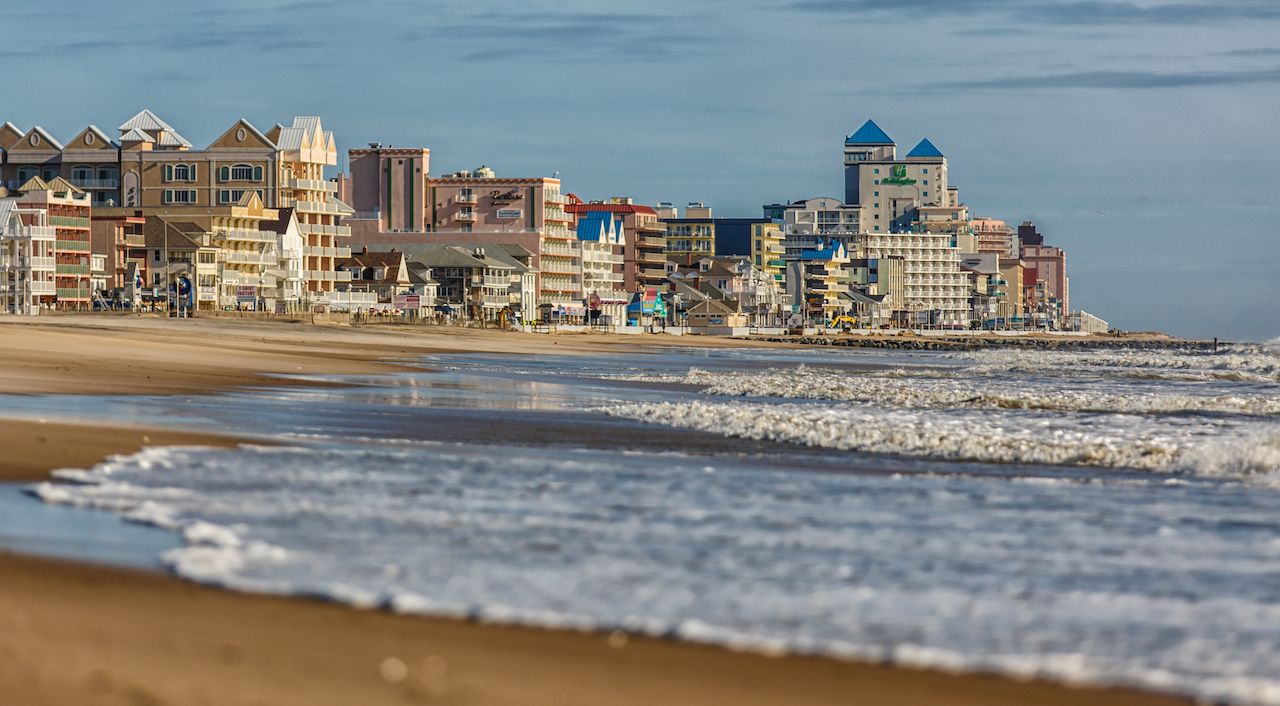 Those who went to high school in the mid-Atlantic — and anywhere within a day’s drive — remember OC as the home to Senior Week. And if you’re longing for the good old days of unsupervised teenage fun, the good news is that not much has changed. This funky little beach town at the end of US-50 has a boardwalk filled with fried food, midways, and T-shirt shops, where the fries at Thrasher’s and the Orange Crush at Harborside Bar and Grill are the stuff of summertime legend. For something a little more adult, hit up Seacrets, a massive tiki-themed complex where you can have your drink delivered on an inflatable raft. 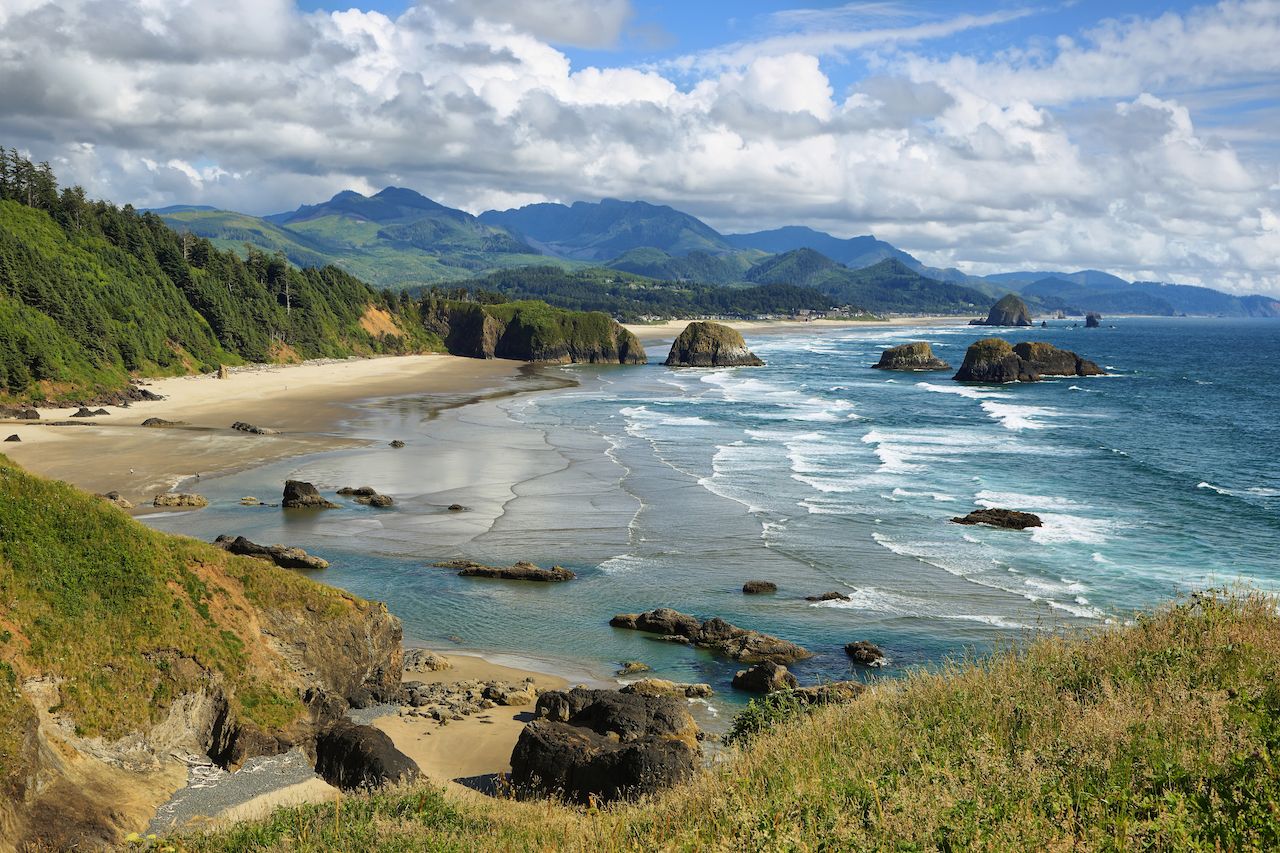 A tropical beach destination it is not. But for hiking, surfing, and craft beer it’s one of the West Coast’s best small towns. Every August it hosts the world’s biggest beach volleyball tournament, which now welcomes over 1,500 teams. If you’re not in town for that, you can also meet adorable harbor seals at the Seaside Aquarium, or drink fresh craft beer at Seaside Brewing Company. Just down the coast you’ll find Cannon Beach, where you can hike in the hills over Haystack Rock (recognizable from The Goonies) while enjoying views reminiscent of the British Isles. Or hike through the Tillamook State Forest, and check out its World War II bunkers and the iconic Tillamook Rock Lighthouse. 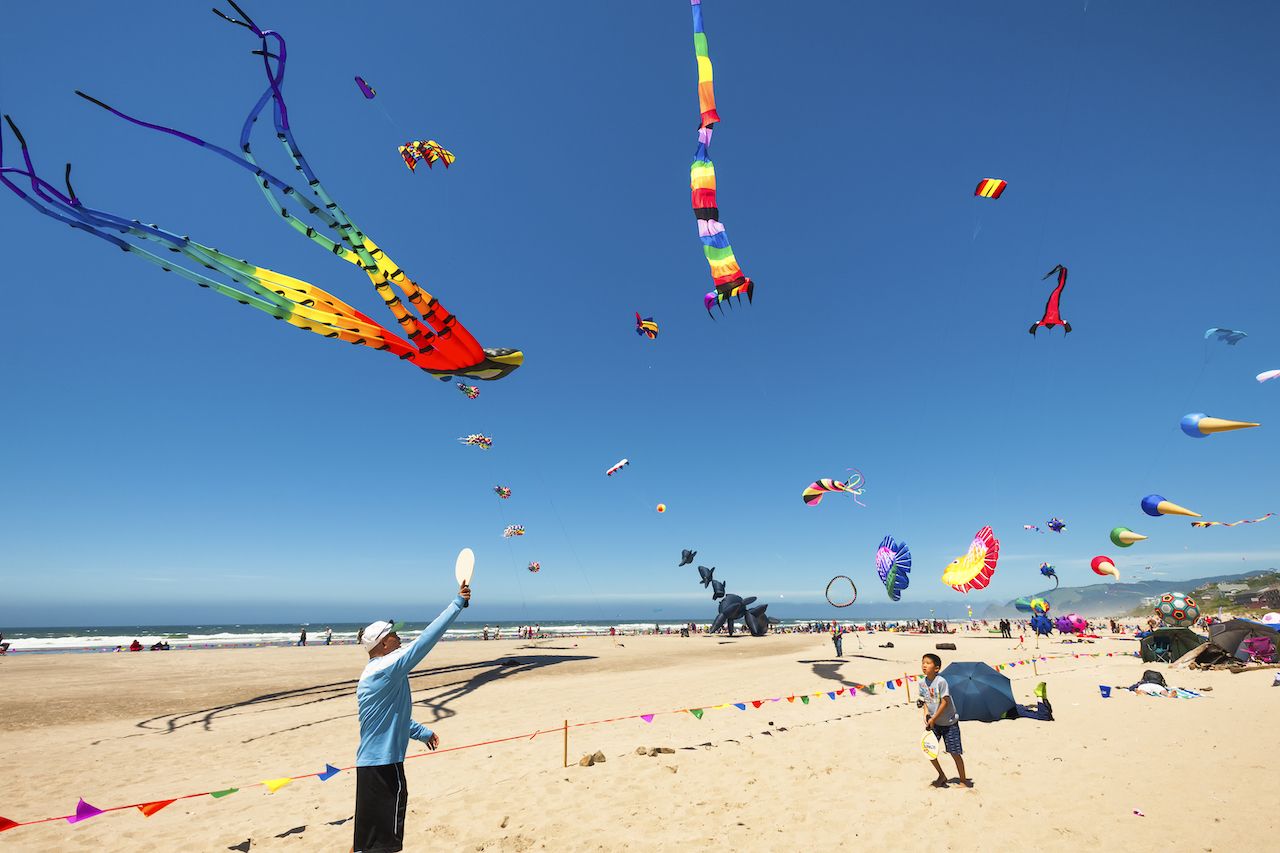 About halfway down the Oregon coast from Seaside sits little Lincoln City, seven miles of undisturbed coastline off US-101. The eerie beaches here are dotted with sharp rock formations, creating a misty forest of stone perfect for sunset photo-ops. You can also visit one of the state’s largest kite festivals that’s held every June, or visit in mid-October and hunt for artistic glass orbs along the beach during Finders Keepers. This year marks the 20th anniversary, and orbs are being hidden all year, if you feel like visiting when the weather is warmer. 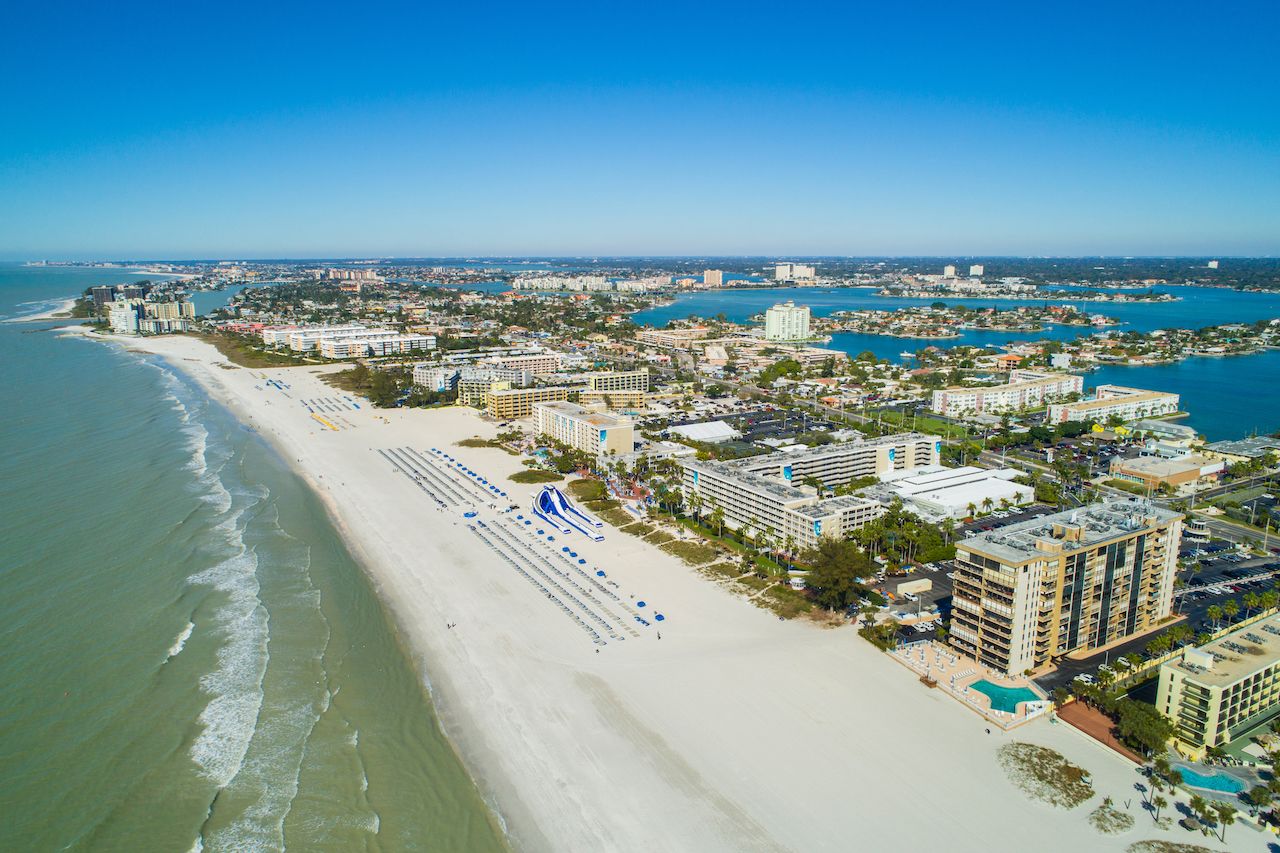 Just a short drive from Tampa across the Howard Frankland Bridge brings you to the Gulf Coast’s most fun beach town. St. Pete Beach isn’t just home to the iconic Don Cesar Hotel — the “Pink Lady” that was a symbol of 1920s excess — it’s also got some of Florida’s best beach bars at the Undertow and the Drunken Clam. Head over to the Hotel Zamora for a spectacular Sunday brunch before wasting away the afternoon next to turquoise waters and fine white sand. Or head over into the city of St. Petersburg and tour through the state’s best beer town, featuring Florida’s only all-sour brewery at Inoculum Ale Works, and its oldest craft brewery at Dunedin Brewery. 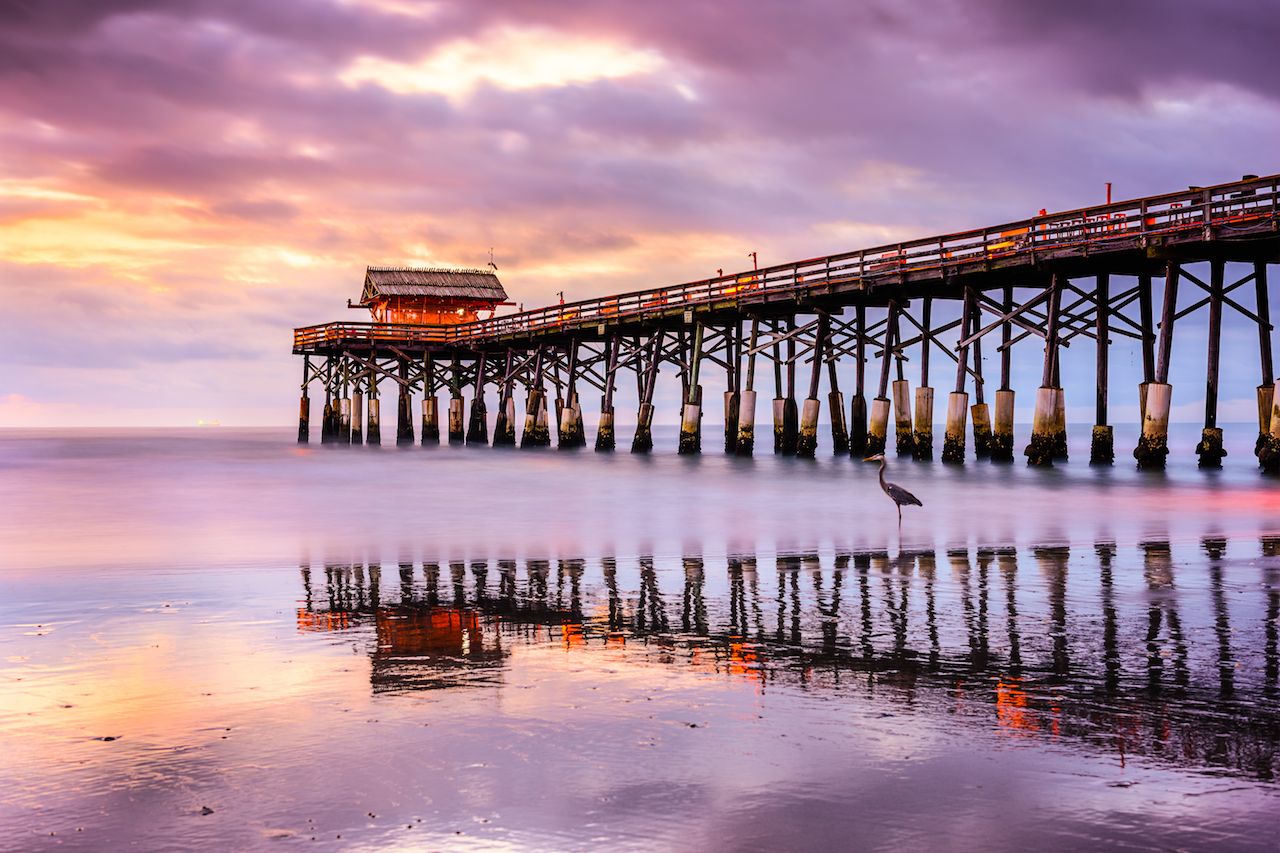 Visitors to Orlando — and more specifically, visitors to its glut of theme parks — are often disappointed to learn that they’re in the odd part of Florida that’s nowhere near a beach. Still, Cocoa Beach is just over an hour away. Drive past the Kennedy Space Center and onto Atlantic Avenue, then cruise the state’s funkiest beach town. Here you’ll see surf shacks and pizza joints lining the streets as surfers clamber to catch Florida’s best waves. On Sundays, it’s also home to Florida’s best beach party when the sand behind Coconut’s turns into a giant waterfront tailgate with no actual event to slow down the action. 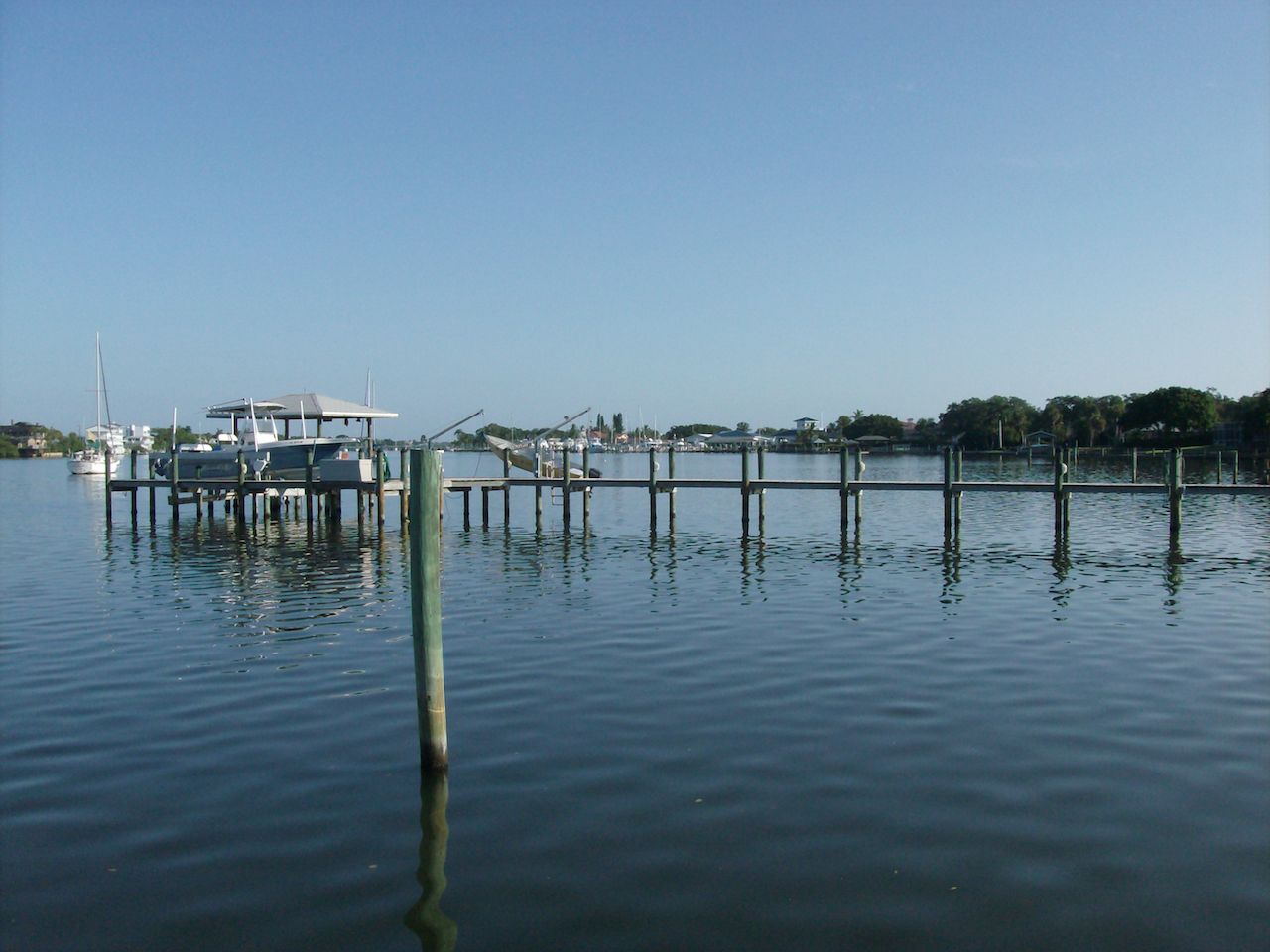 Though Indian Harbour might not be the center of beachside excitement in Florida, it does offer a peaceful, affordable jumping off point to some of the cooler stuff along the state’s central Atlantic Coast. It’s about 40 minutes from the Canaveral National Seashore, which has 24 miles of undeveloped beach. Near there, you’ll find the Kennedy Space Center, as well as the surfing and beach parties of Cocoa Beach. Just inland from Indian Harbour you can also visit Melbourne, which has Brevard Zoo, one of the surprisingly best small-town zoos in America. 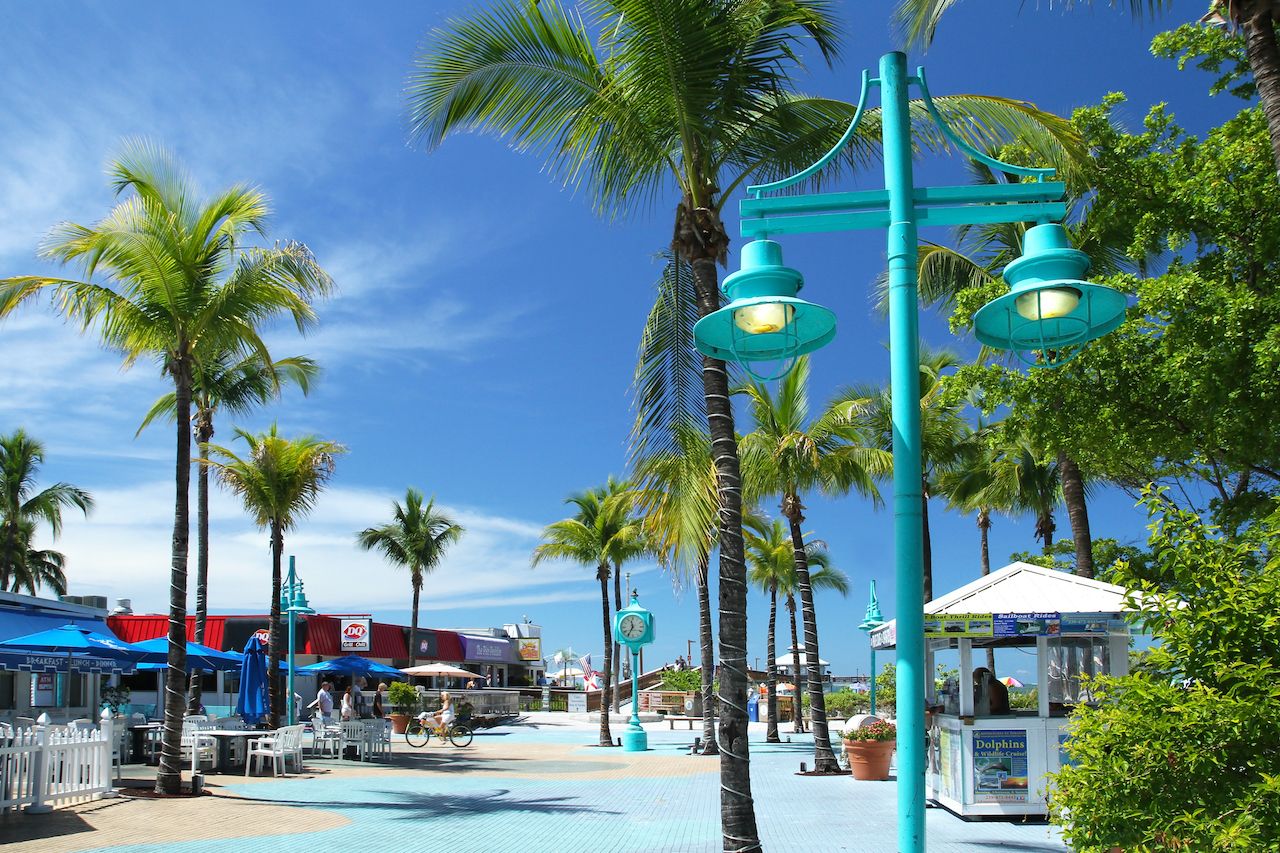 Perhaps you hadn’t given Fort Myers Beach a second thought since that spring break you vaguely remember spending at the venerable Lani Kai. Refresh your memory relatively affordably this summer and head back to this Gulf Coast gem. You can still get a fruity drink at a considerably quieter Lani Kai, as well as a number of other beach bars like Bongo’s, The Salty Crab, and the creatively named Florida Beach Bar. If you’re down for a short drive, you can also head into downtown Fort Myers for some mid-sized city nightlife and, for your money, the best slice of New York-style pizza in America at the Downtown House of Pizza. 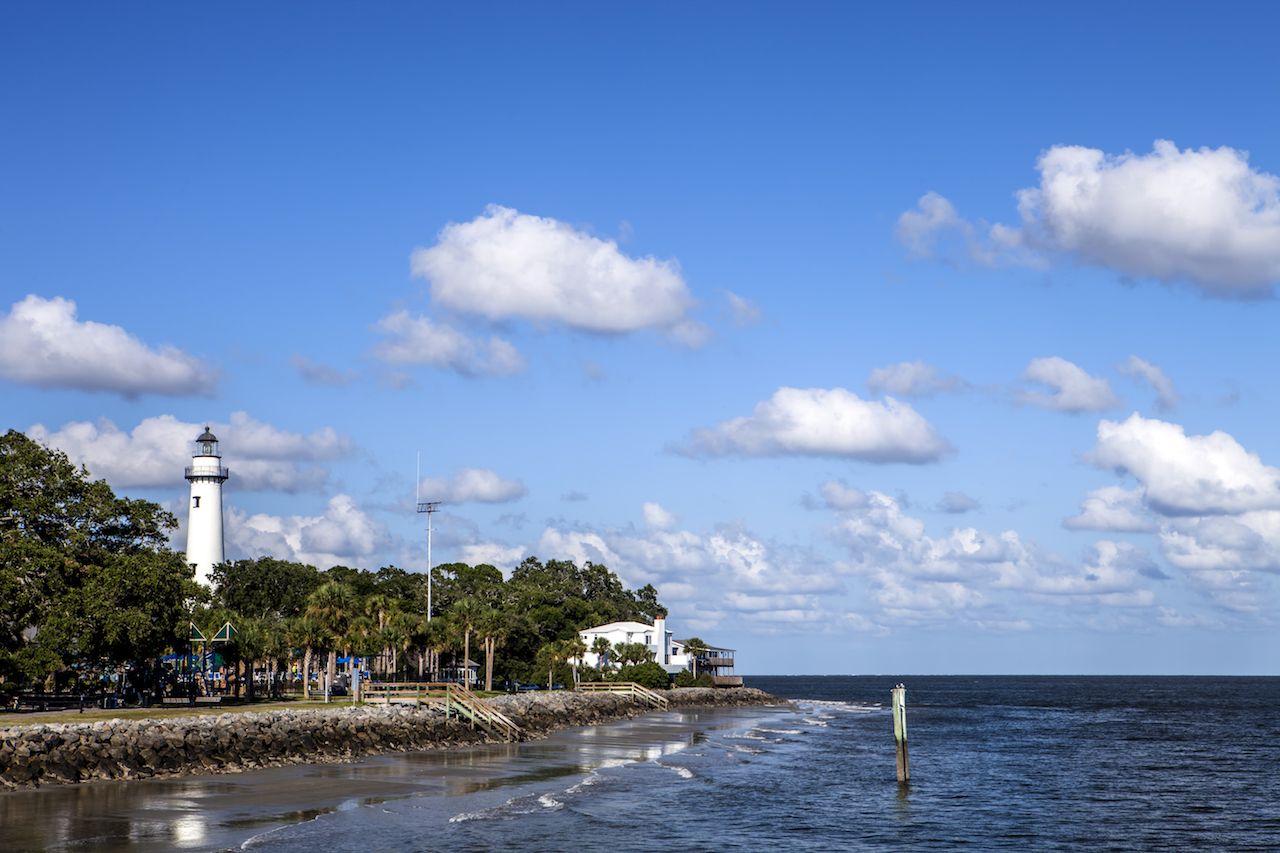 The largest of Georgia’s Golden Isles is surprisingly affordable given its massive popularity among honeymooners and weekend-trip couples. The stunningly romantic island is covered in oak trees draped with Spanish moss, giving it a deeply Southern feel unlike any beach town in America. The place is steeped in history too, whether you want to visit a lighthouse dating to 1872 or Christ Church at Frederica, which has held services continuously since 1736. It even has an archaeological site at Cannon’s Point Preserve, which has artifacts dating back to 2500 BC.

The best Fourth of July celebrations you’ve probably never heard of
Tagged
Beaches and Islands Trip Planning United States
What did you think of this story?
Meh
Good
Awesome