My dad took me grocery shopping in Seattle’s International District most weekends of my childhood. He bought stout bottles of sambal oelek, styrofoam containers of raw tofu wrapped in plastic wrap, and duck eggs at at Viet-Wah, the Vietnamese grocery store in Chinatown, then he’d duck into the cafe next door and grab himself a banh mi sandwich before we drove home. But sometimes there would be something in it for me, too, if I had behaved and traffic wasn’t too bad: a coconut bun from a bakery nearby. I remember that it had pink walls.

That particular bakery is closed now, but there are bakeries just like it scattered throughout Chinatowns all over the United States, with clear display cases packed with doughy custard-and-cream-filled treasures. The fluffy, warm bun, shaped like a miniature baguette or a closed hot dog bun, the surface of which is shined by an egg wash and sprinkled with sesame seeds, is filled with a sweet mixture I have yet to encounter in American desserts. It’s the consistency of buttery breadcrumbs, grainy or flakey in texture, and flavored with shredded coconut. Another version, aptly called the coconut cream bun, is split down the middle and filled with a strip of vanilla-flavored buttercream.

I still enjoy the occasional coconut bun, called gai mei bao (which translates literally to “rooster tail bun,” or cocktail bun), but it wasn’t until recently that I began to question where this delectable treat actually comes from. After all, there is no great baking tradition in Chinese cuisine. Steamed buns are a delicacy in China, but pastries the likes of which you might find in a French bakery? Not so much.

“The Chinese don’t really bake. Most kitchens don’t even have an oven in mainland China,” says Kian Lam Kho, James Beard Award-winning author of the cookbook Phoenix Claws and Jade Trees, and the culinary blog Red Cook. “The concept of baking is relatively modern — as in the 1800s.”

So if Chinese culinary tradition doesn’t include much in the way of bakery, and homecooks certainly don’t engage with the practice, how did this bread-based dessert become so popular in China? The answer is rooted in legend and rumor. 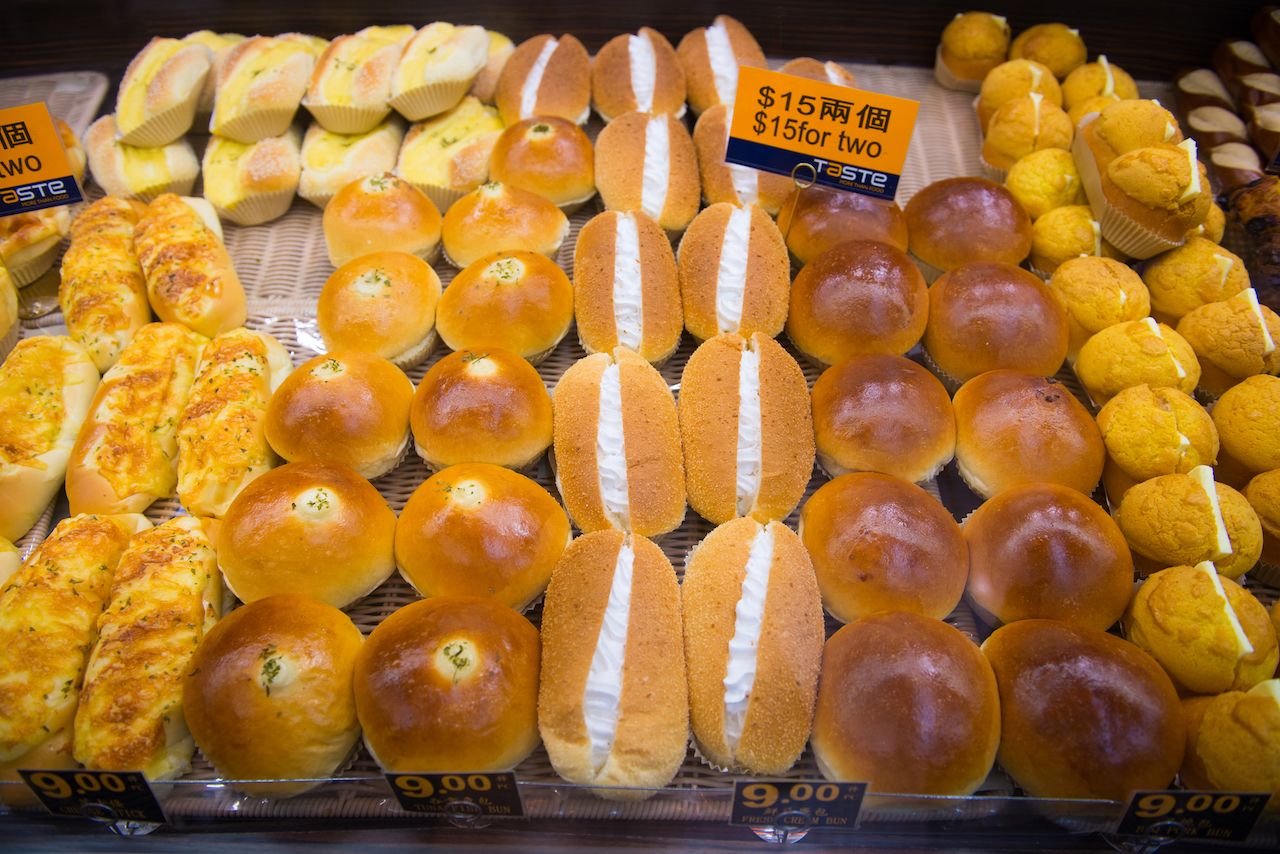 Lam Kho has heard stories (which he emphasizes he’s not been able to independently verify) that the coconut bun might have originated in Macao, a sovereign nation of China, located off its south coast. Nicknamed the Las Vegas of Asia, Macao was a Portuguese colony for 400 years, and in that time, China absorbed many of its culinary influences. The most famous example is probably the egg tart, a Portuguese creation now ubiquitous in Chinese bakeries. It’s possible that the coconut bun was inspired by similar European baking traditions.

It’s not a coincidence that Macao is near Hong Kong, likely the birthplace of the coconut bun as we know it today. Another legend contends that the coconut bun didn’t appear in Hong Kong until the 1950s, when bakeries ground up leftover, unsold bread, combined it with coconut flakes, sugar, and butter. But I couldn’t confirm that story, and Lam Kho hadn’t heard it either. Either way, one aspect of the pastry’s history is certain: The coconut bun is “considered a Hong Kong bakery type of food,” Lam Kho says.

Though it’s nearly impossible at this point to verify either story, Lam Kho points out that the popularity of baked goods in China, like coconut buns and egg tarts, all comes down to colonialism. The British claimed Hong Kong as a colony in 1842 and controlled it until 1997, when the then-defunct empire returned Hong Kong sovereignty to China.

“The Portuguese and English brought in their own cooking, and their own baked goods,” Lam Kho adds.

The pineapple bun, a close cousin of the coconut bun, might offer a clue to the provenance of the latter. Now recognized as a part of Hong Kong’s “intangible cultural heritage,” the pineapple bun doesn’t actually contain any pineapple filling or flavor — it’s actually closer to a hot cross bun in appearance — but the criss-cross pattern on the pastry’s exterior is said to resemble the outside of a pineapple.

The pineapple bun has been around for at least 70 years, since Tai Tung Bakery in Hong Kong began making them in the 1940s. The shop’s owner, Tse Ching-yuen, told the South China Morning Post, that while a similar pastry existed in Japan at the time he opened Tai Tung Bakery, he can’t be sure of its true origin, either. It’s possible that Japan introduced the concept of the baked bun to Hong Kong; the Japanese army occupied China from 1937 to 1945. However, there’s no hard evidence that the two pastries appeared in Hong Kong bakeries at the same time.

If colonialism and conquest did give rise to the coconut bun, that might complicate its legacy as a beloved Chinese dessert. But in China that history seems mostly to have been forgotten. Hong Kong-style bakeries are popular all over China these days. Since those times of hardship and conflict, the coconut bun has become one of the country’s most well-known and popular desserts. Though its origins remain shrouded in mystery, you’re wasting time questioning the coconut bun’s history when you could just be eating one.

Food + DrinkThe 8 Most Delicious Street Foods in Beijing and Where To Try Them
Tagged
Dessert China
What did you think of this story?
Meh
Good
Awesome

12 Sweet, Savory, and Delicious Chinese Desserts You Have To Try
94 Percent of People in China Live East of This Line
13 of the Most Underrated UNESCO Sites You Need To Visit