Growing up in North Carolina, pies were a fixture of Sara Foster’s family home. Her mother kept the fridge in their home filled with frozen pie crusts, ready to be filled for family meals. Every Sunday after church, two pies would be waiting for Foster and her sister when they joined their grandmother for lunch: chess pie for her sister and chocolate meringue for her.

The family didn’t just love to eat pie, either. Foster, the founder of Foster’s Market and author of Pie, which is part of the Savor the South cookbook series, grew up in a family of experienced bakers. She would knead the dough for pie crust with her grandmother. Foster’s mother often made pies at 10:00 PM as a late night snack while the family watched television. Her grandfather baked chess pies, too. In her family, making pies was “the easiest thing in the world, almost like making a sandwich,” Foster explains with a laugh.

Today, pie is a national dish, beloved everywhere from Washington to Florida. Yet in the American imagination, pie is often considered a Southern dish prepared by the family matriarch wearing an apron dusted in flour. Foster’s upbringing and lifelong love of pie fits perfectly with what the rest of the country thinks of as Southern culinary traditions. Pie is a staple of Southern life, a comfort food eaten at a communal table with extended family and friends. It also helps define the region’s cuisine.

Why pie flourishes in the South 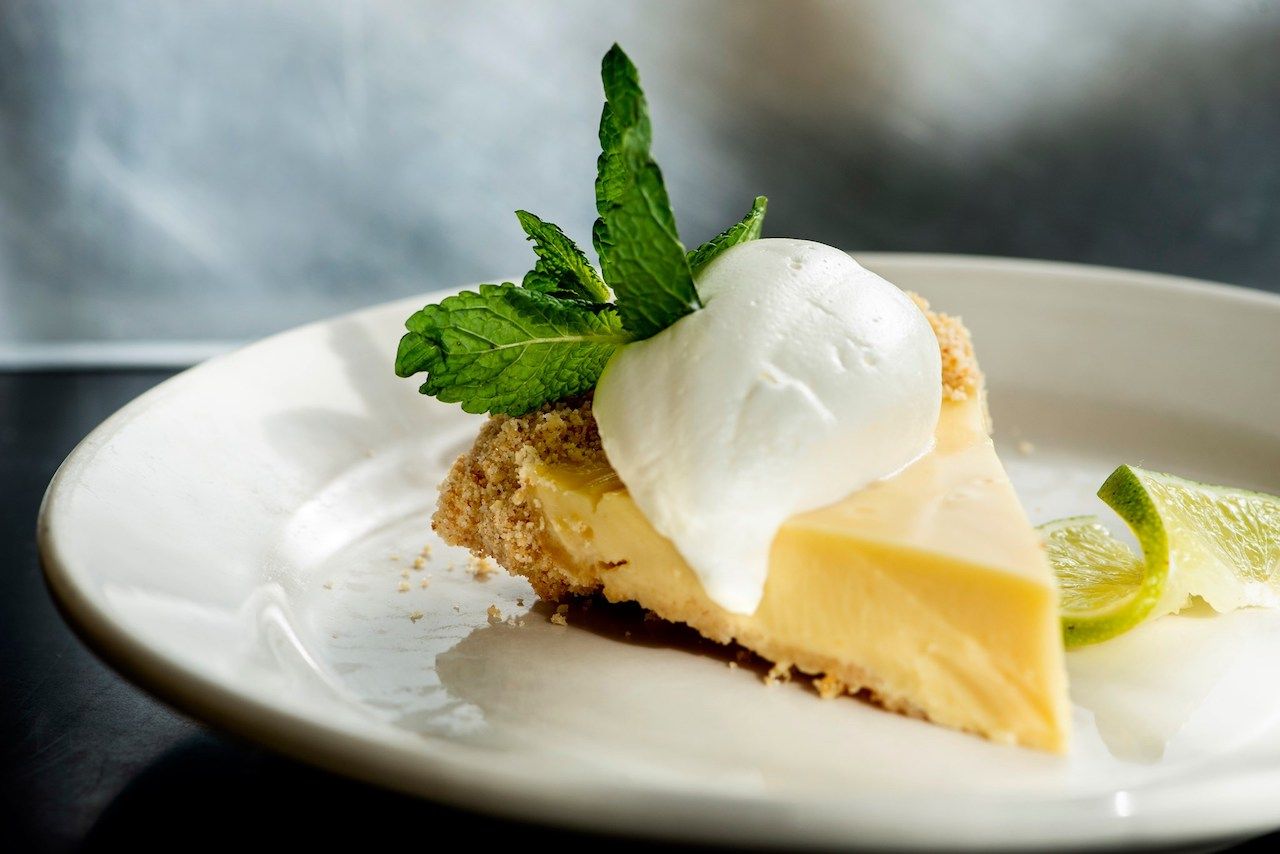 So many of the most iconic pies in the country have Southern roots: sweet potato in North Carolina and Alabama, pecan in Oklahoma and Texas, key lime in Florida, and coconut cream in South Carolina. Other styles have barely caught on in the rest of the country and remain Southern secrets deeply rooted in the region’s culinary culture. Those seem to best represent what makes the region’s pies so great. Take, for example, Atlantic Beach pie, which emerged alongside the politics and economy of the South.

Bill Smith, former chef at Crook’s Corner, single-handedly reinvigorated interest in Atlantic Beach pie. In 2014, Smith wrote about how, growing up in North Carolina, local legend dictated that it would be fatal to eat dessert after fish. That cut a lot of sweets out of the equation. Commercial fishing has long been key to this coastal state’s economy, and seafood is a pillar of local communities and culture. The one exception to the no dessert after fish rule was lemon pie.

One place where this fish and lemon pie tradition was strongest was at fish camps. These family-owned seafood restaurants sprung up in the late 1960s to serve the growing number of Southerners who moved to the state to work in the booming textile industry. According to Justin Burdett, the current chef at Crook’s Corner, fish camps were Atlantic Beach pie’s original home. There, the dessert was simply called lemon pie.

“It’s what you would eat after you went to a fish house,” Burdett tells me.

Smith backs up Burdett’s story. In an email, he told me that all the seafood restaurants in New Bern, where he grew up, served a version of lemon pie. When Smith became a chef, he promptly forgot all about lemon pie. Then the Southern Foodways Alliance approached Smith to prepare dinner for a summer event for 200 people. He began researching recipes and decided that lemon pie — which he renamed Atlantic Beach pie — would be the perfect dish to represent the South. He made a few adjustments to the traditional recipe, like using crushed Saltine crackers rather than Ritz for the crust because that’s what he had in his pantry, and he swapped meringue for whipped cream for the topping.

The pie was such a hit at the party that he started serving it at Crook’s Corner. Atlantic Beach pie’s intersection of history, tradition, and flavors (the balance between salty, sweet, and tangy citrus is what makes it so tasty), resonated with Southerners, and it’s still the most iconic dish on the restaurant’s menu today.

A spirit of innovation born out of necessity 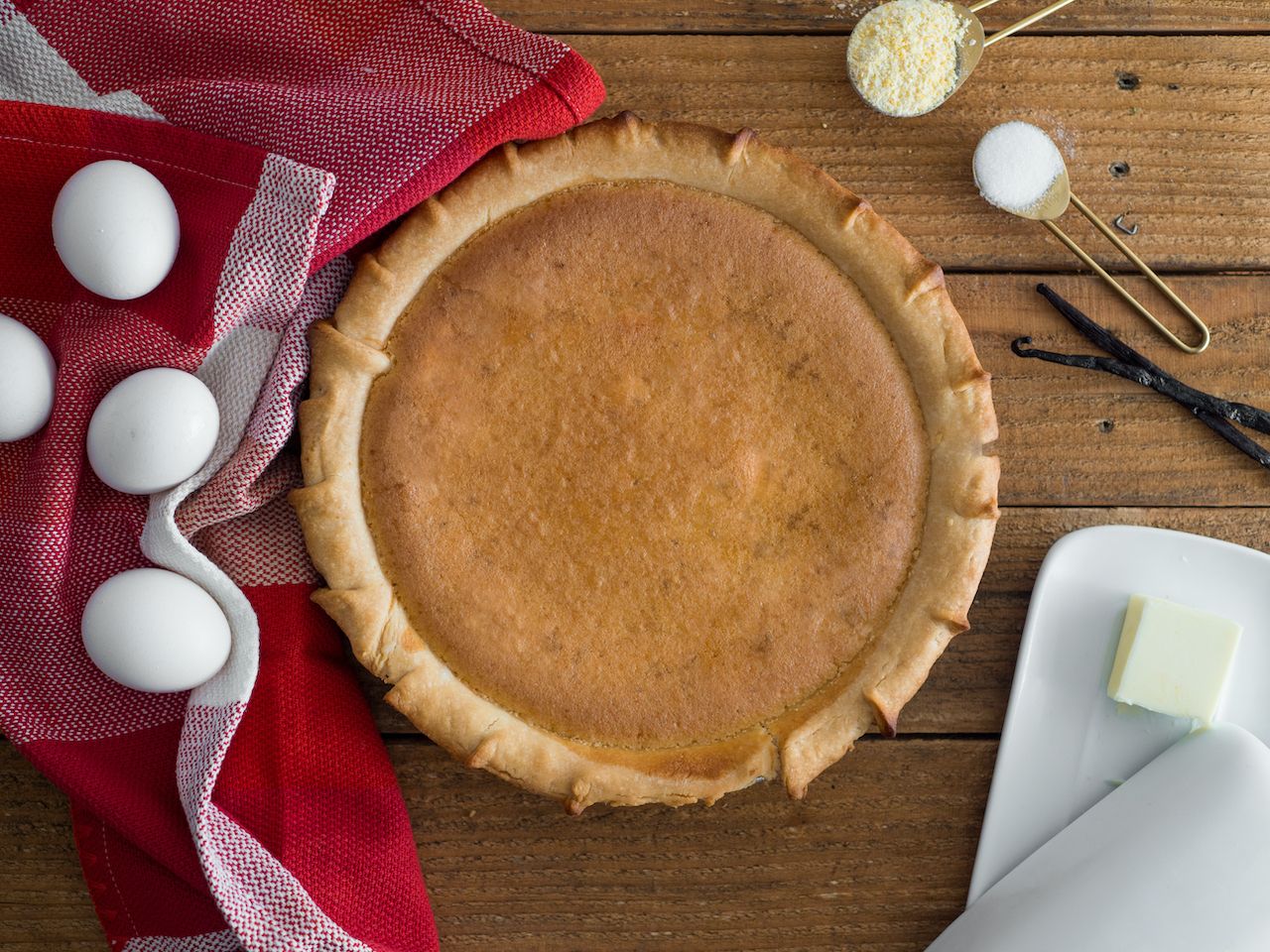 A history of Southern pie would not be complete without mentioning its ties to slavery. This is especially true for enslaved women, who were responsible for all of the cooking in the homes of wealthy white families. Slaves might also be responsible for popularizing another favorite Southern pie: sweet potato pie. Antebellum cookbooks are packed with recipes for this Southern favorite, but slaves likely cooked most of these pies in plantation houses. Sweet potato pie rarely appeared in their own homes until stoves became more affordable, according to food writer and historian Adrian Miller.

After the Civil War, many recipes were adapted during times of food scarcity. NPR reports that one 1863 recipe details how to make an apple pie without apples. In a story for The Washington Post, writer and pastry chef Lisa Donovan explains that a freed slave who made a living selling pies in 19th century Alabama might be responsible for one of the first ever chess pies. In 1881, a former slave named Abby Fisher published her remarkable cookbook, What Mrs. Fisher Knows About Southern Cooking, which features recipes for custard pie (similar to chess pie), as well as sweet potato pie. Chess pie is another pie that grew out of need — it replaces citrus with vinegar and fresh milk with buttermilk.

Burdett of Crook’s Corner thinks that creating meals, not just pie, with easily obtainable and inexpensive ingredients is an essential piece of Southern cuisine.

“With most food when you’re in the South, when you’re broke you just kind of pull ingredients, and that’s where new things develop and that’s how Southern cuisine stays alive,” Burdett says. “My grandmother just made what she had available, and those dishes morphed into something amazing. That’s just ‘what’s in the kitchen’ kind of cooking. Being broke and not having any money and trying to cook for a family.”

That spirit of innovation born out of necessity might be why the South remains the reigning kingdom of America’s best pies. Foster jokes that after she finished testing recipes for Pie, she gathered all the leftover scraps and crushed up pieces of cookies, potato chips, and pretzels, and, not one to waste, made a pie crust. It ended up being one of her favorite recipes. Her baking philosophy has always centered on experimentation; she encourages deviating from the recipe by adding a little cardamom there or toffee there. The industrious Southern cook knows that you can make pie that your family will love with almost anything.

“It’s an easy thing to make,” says Foster, whose family members whip up their favorite versions from memory, no recipe needed. “The ingredients are pretty common. And it’s a great thing to share. It goes back to people sharing and getting together, and a lot of the time those things are based around food, and I think that’s always been a big part of Southern culture.” 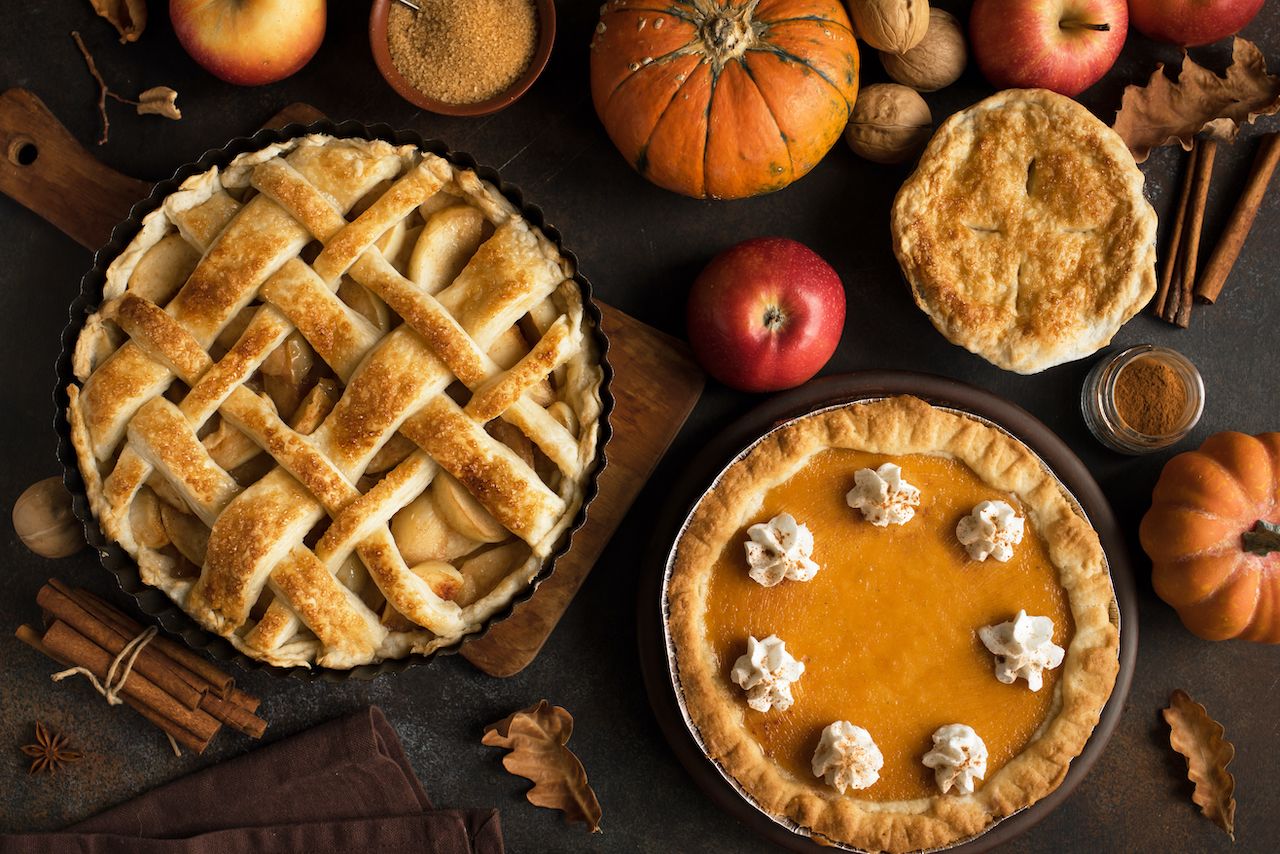 Southern cooks may have elaborated on, and perfected, the American pie recipe, but America’s early colonists — the English Puritans who made their way to a supposedly new world in search of religious freedom — are responsible for bringing pie to America’s shores in the first place.

“When I talk about pies, I often ask what people, usually New Englanders, what they think is the most New England pie,” says Robert Cox, author of New England Pie: History Under a Crust, and head of special collections at the University of Massachusetts Amherst. “Ninety-nine percent of the time the response is apple and pumpkin. Though these are national pies by this point, all of those have deep New England roots.”

Cox says pies have been a part of the American dinner table since the British established their first colonies in New England. So central were pies to their diet that when Emilia Simmons published American Cookery, the first cookbook written by an American in 1796 in Connecticut, she included an entire section of different types of pie crust. New Englanders were especially fond of savory pies; squash pies and mince pies made with meat and fruit were part of the original colonial cuisine. The chicken pie was one especially crucial dish to the early settlers.

“The chicken pie was really dearly loved and was indispensable in the winter time,” says Cox. “You could keep your chickens alive through January and February, when most meals consisted of dried and preserved things. So a chicken pie is a harbinger of spring, a moment of hope and looking forward.”

Like the chicken pie, Cox says that pies were once New England’s most “utilitarian” food, appearing at breakfast, lunch, dinner, as a side, a dessert, or even the centerpiece of the meal. That’s not unlike how pie once functioned in South. And just like in the South, there are pie traditions that exist nowhere else. For instance, in Pennsylvania, shoofly pie is often eaten for breakfast, and it’s not uncommon to eat a piece of cheddar cheese alongside a slice of apple pie. 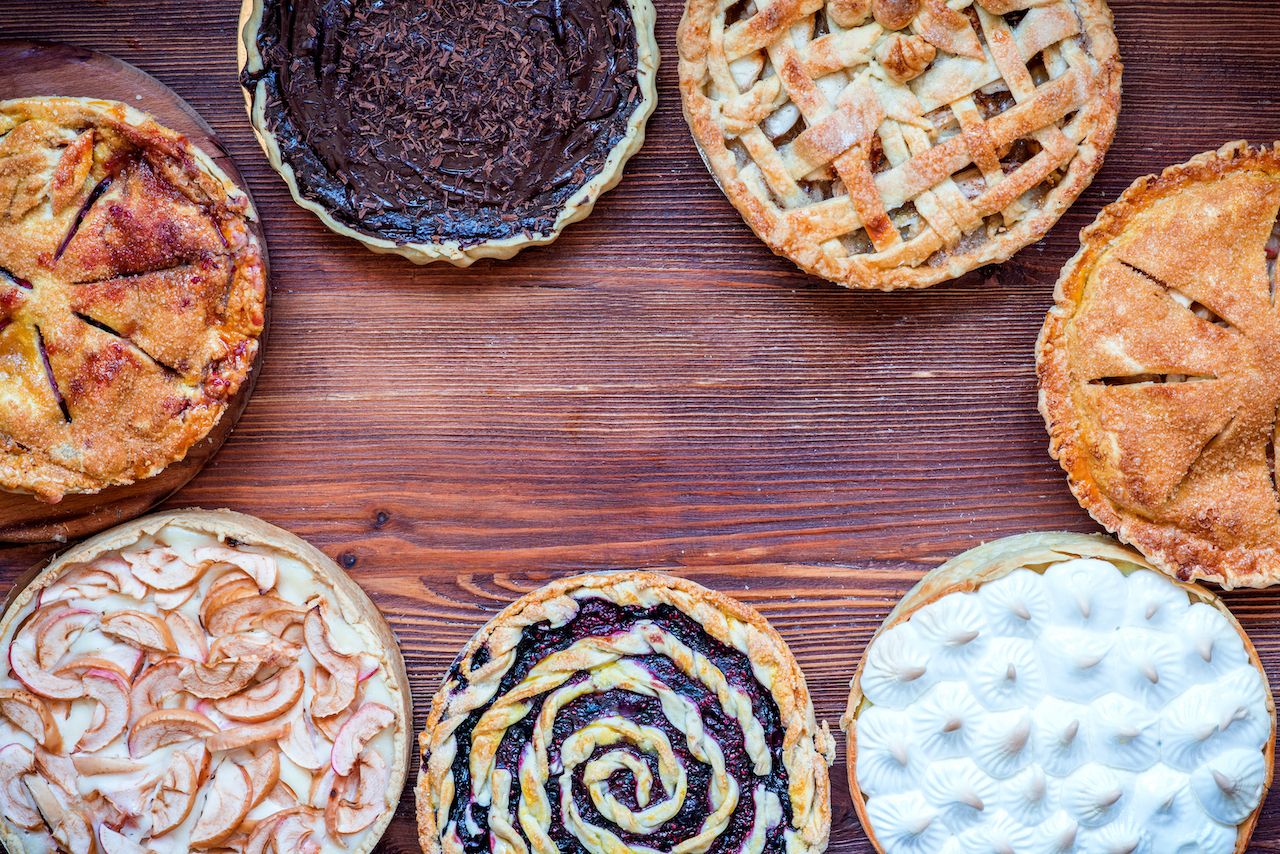 These days, New England pies like apple and pumpkin are all associated with American history — the Pilgrims and Thanksgiving in particular — while those that were once wildly popular, like mince pie, have gone out of style. In that region of the country, pie’s roots are firmly stuck in the past.

Both the South and New England hold their traditions dear, but Southern cooks treat pie almost as a living thing, constantly forcing it to evolve and reinventing old recipes. The South also has a wider range of traditional pies that are just waiting for a new twist, which allows for a more playful and experimental approach to baking. These modern pies are inspired by generations of bakers who started making pies in their kitchens for their families with whatever was available in the pantry. But one thing has stayed the same through all these years: The Southern chef has managed to elevate baking pie to an art form.

Food + DrinkWhy the Saying Should Be ‘as American as Pumpkin Pie,’ Not Apple
Tagged
Dessert United States
What did you think of this story?
Meh
Good
Awesome