THOUGH ALBANIA IS primarily known for breathtaking coastlines, Ottoman-era castles, and more than 170,00 communist bunkers, it’s also an unspoiled and rugged paradise for climbers making their way through the Balkans. Although the last decade has seen small efforts to bolt and develop climbing in Tirana, Albania’s capital city, this potential epicenter for climbing has gone largely unexplored.

It wasn’t until a Balkans climbing trip by World Champion Czech climber Adam Ondra that this sleeping giant finally got its day in the spotlight. Since that trip, the small community of Brar is now home to one of the hardest sport climbing routes in Europe (and the hardest route in the Balkans). Ondra set the 9b route (a 5.15b in the YDS rating system) called “The Dream” in 2018. Only one climber in the world — French professional climber Seb Bouin — has climbed the 160-foot-tall from bottom to top without falling (called “sending.”)

Since then, efforts have been made to organize funding through various international and local organizations to help fund the gear and manpower necessary to develop climbing in Tirana and beyond. But climbing is still a foreign concept to the general population, and the climbing community is still painfully under-funded and under-equipped to spearhead such a massive project. However, the region is becoming more well-known for climbing, thanks in part to the efforts of Rock Tiran climbing gym owner Elion Çikopano, who has been at the forefront of the movement to map and bolt Tirana routes. 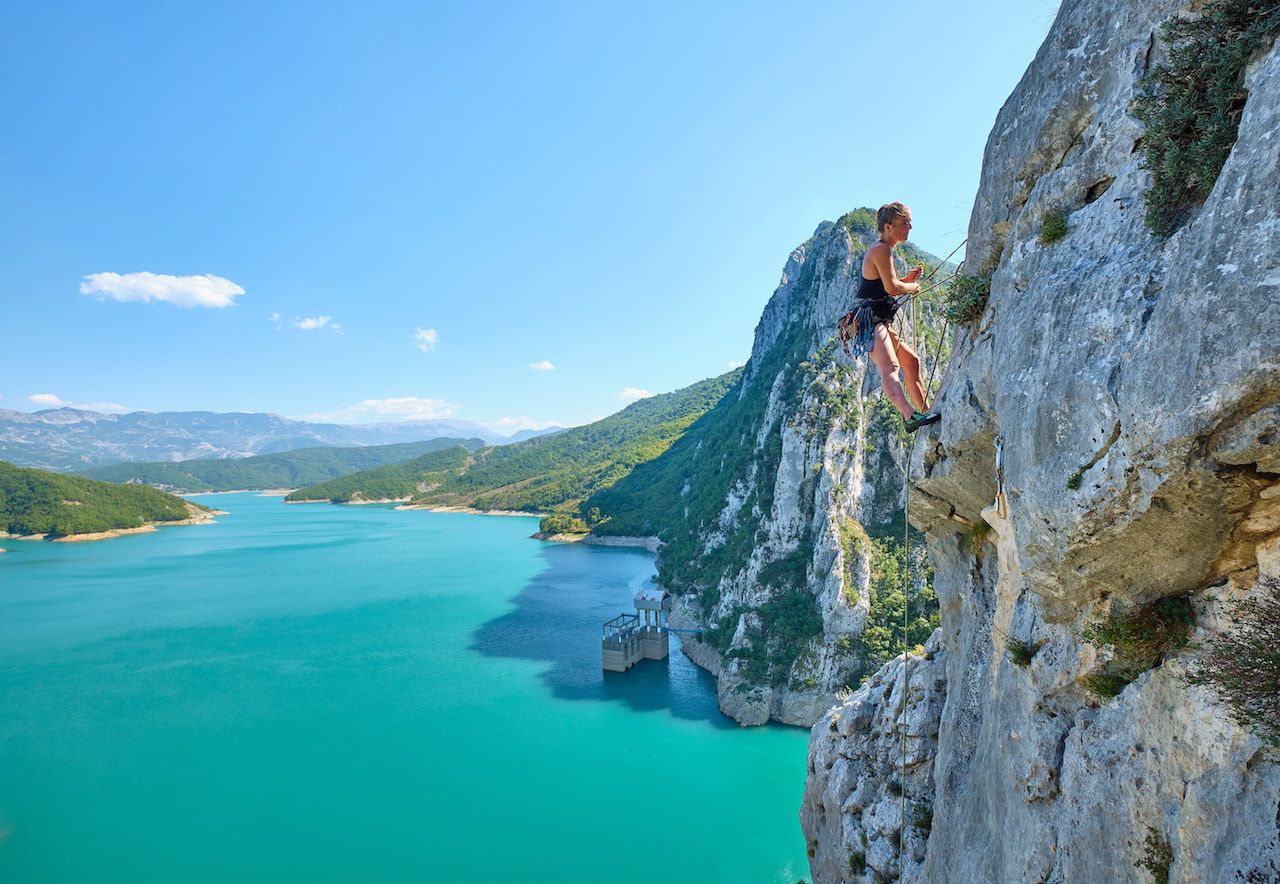 The most extensive area for climbing in Tirana is Bovilla Reservoir, divided into four different climbing areas. Each has its style of climbing, type of rock, and groupings of difficulties.

Snail Wall, located just a short hike from the Bovilla Cafe, is exclusively slab climbing on sharp pockets. The area has the best view as it looks out over the entire reservoir. Ratings range from 5b-6b with about eight routes. None are too strenuous, and the access is easy. Park at the Bovilla Cafe and walk up a short path to the obvious blank face closest to the parking area.

The next area is Lakeside. This area takes the least time to access, so go there to get in a quick send if you’re tight for time. It’s next to the dam with a small parking area. You’ll need to first top out of the lower section to reach the top section, so bring up whatever gear or snacks you’ll want to have. Routes here range from 4b-6b+ with around 30 routes in total. It’s a mix of technical face and crack climbing and some slab. 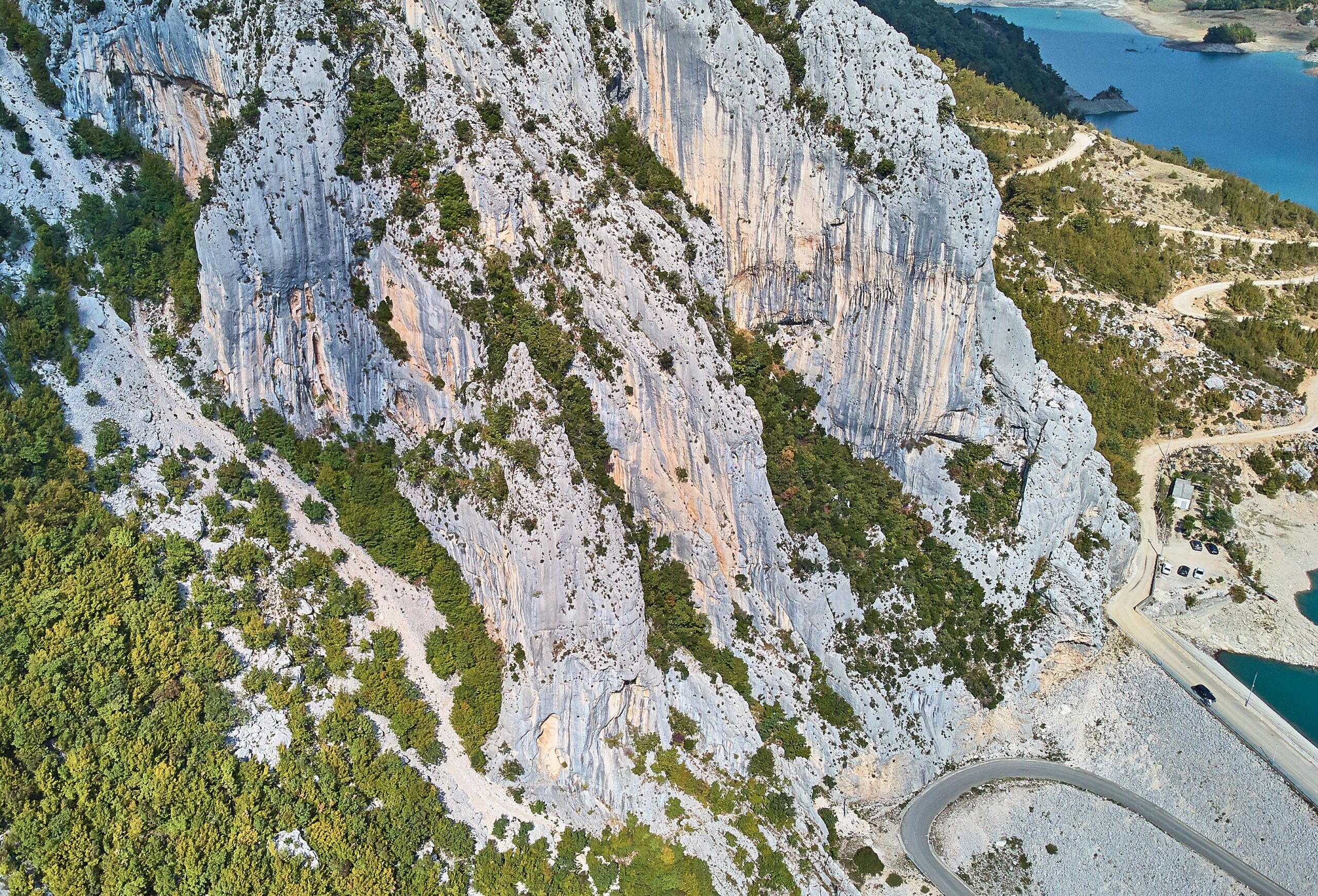 The third and fourth areas are a bit more complex to access and will take some route finding. The “Tufa Section” and “Bar Barinsh” are the first big walls you see while driving up the valley road on the way to the dam and some of the most challenging places to climb in Albania. Park below the dam in one of the small pull-outs to the left and make your way around an outcropping, following the walls up a steep scree field. Be careful of loose rock and be mindful of your footing. Weaving back and forth is better than going directly up.

The routes are mostly beautiful tufa lines that look like painted works of art on the limestone. There are around 30 routes starting at 6b and going up to 8a. Many don’t get much traffic, so expect loose rock. If overhangs, sustained pinches, and wide quasi-chimneys aren’t your thing, best to tick off routes at the other areas first.

There’s no public transportation to this area, so you will need personal transportation. It’s about an hour outside Tirana and half the drive is on a bumpy dirt road. Fortunately, there are many places to rent vehicles in Tirana, and prices vary from 20 euros to 30 euros per day (around $23 to $33) depending on the season. For a snack break, your only option is the Bovilla Cafe, but it has a sweeping vista view of the reservoir and is an ideal spot to rest your feet after tackling slabs in climbing shoes all day. There are also plenty of places for camping or parking your RV if you want to explore the area for a few days. 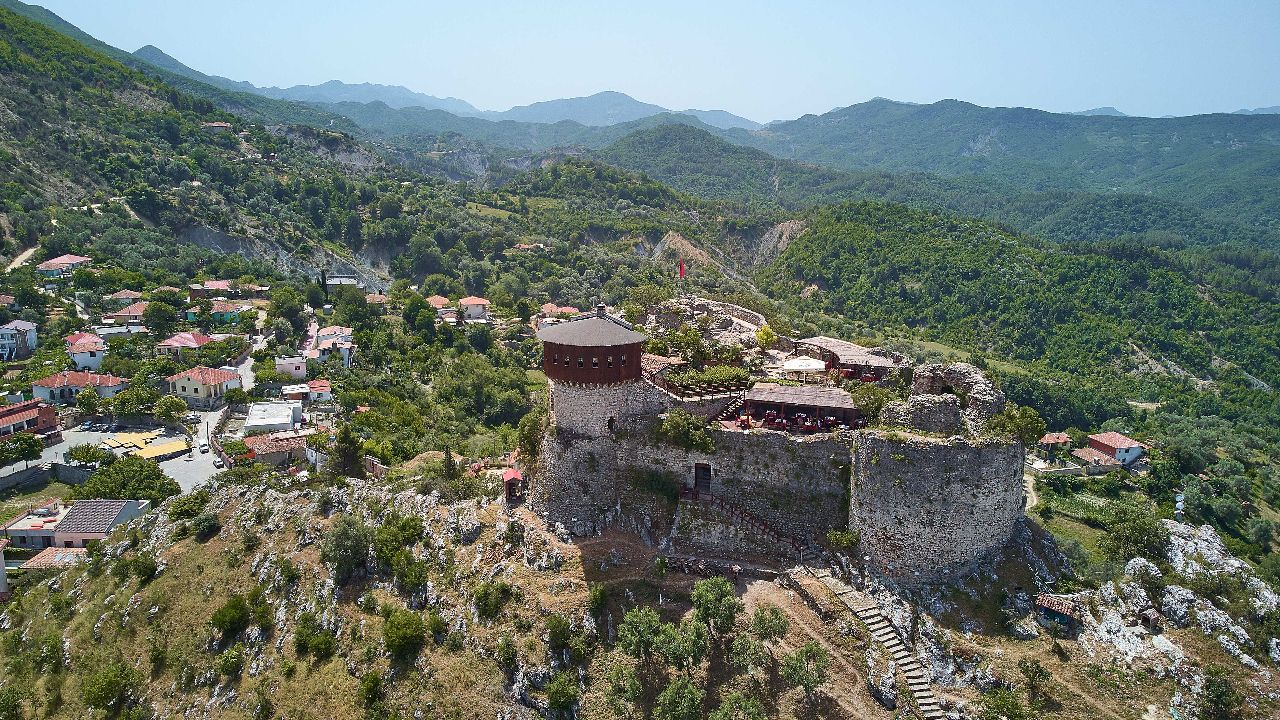 Did you know you can get in several hours of climbing and visit a fifth-century castle in one day? Petrela Castle, about 30 minutes south of Tirana proper, acted as a beacon station to alert the region if and when an Ottoman Empire invasion was headed its way.

Although there’s a cliff directly under the castle, it’s sadly not the climbing area. To reach the actual climbing area, follow the road up from the parking lot and around the back of the castle until it turns into a dirt road. Walk past the olive trees, goats, and probably a few tortoises until you reach a small trail on the left. Follow it to the small, overhanging climbs.

There are around 10 routes here, varying from simple 5a slabs to overhanging 6c pumpfests. But the routes are short and sweet, so you can get in several if a quick training session is all your schedule will allow. Even the longest routes have no more than six or seven bolts.

After your forearms stop working and your veins look like they’re about to burst, take your climbing gear back to the car and pause to take in a bit of Albanian history. If an espresso and a view of the surrounding valley is your cup of tea (or coffee), visit the cafe on top of the castle.

Transportation to the area is limited to just a small bus leaving from Tirana’s southern bus station. Just ask for Petrela and they’ll point you where to go. Otherwise, you’ll need a car. 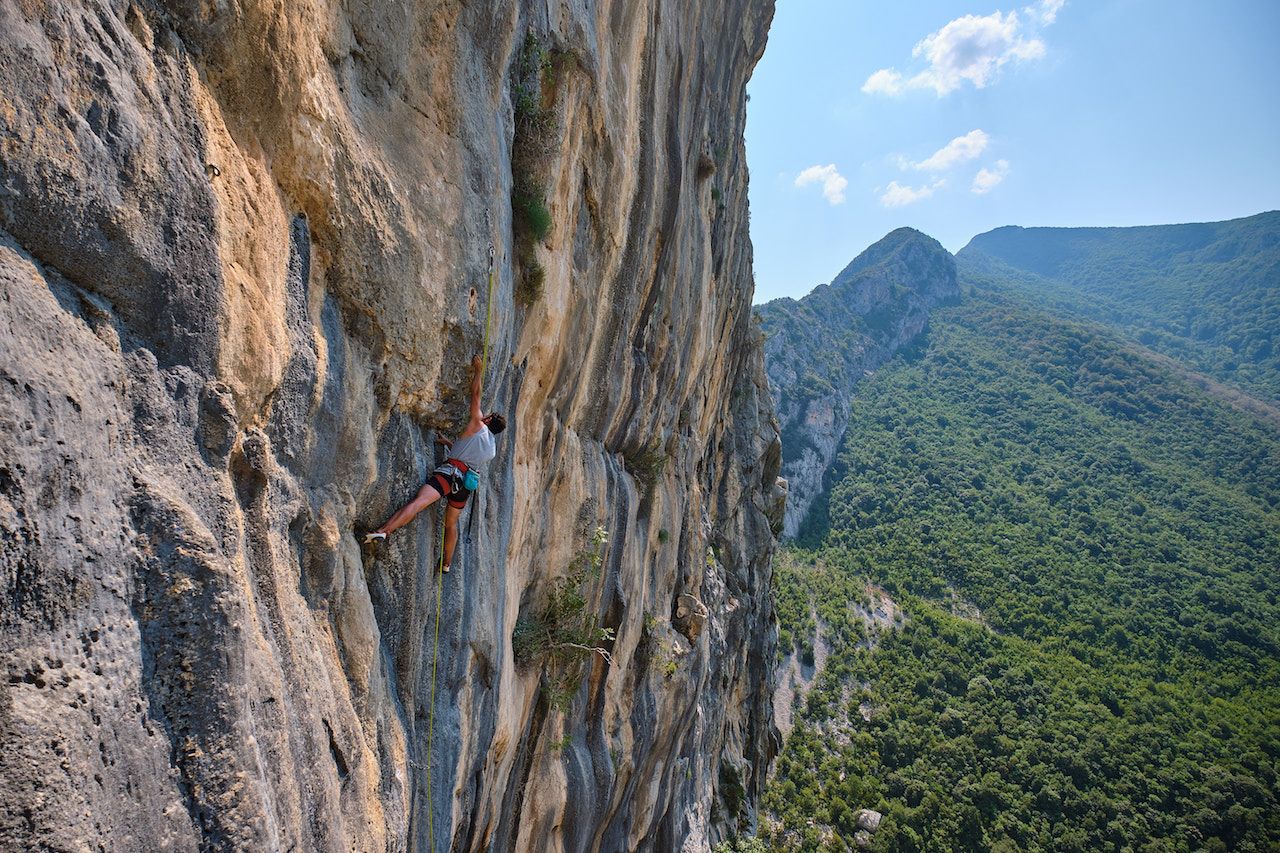 Climbers serious about getting in ascents on some of the hardest routes Albania has to offer will want to head to Brar, about 30 minutes northeast of Tirana (and the closest crag to the city center). Drive toward Brar, staying on the road when it turns to dirt. Park on the right just before the tunnel. The truly impressive behemoth of a wall will be impossible to miss.

To get to the base, cross the road and climb the very steep approach to the left of the tunnel. Try to follow the path that wanders through the trees on the left to not erode the ground directly beneath the climbing areas.

Brar has the highest concentration of difficult climbs in the area. It’s not for beginners as there are only a couple grade 6 routes; the rest are 7s and above. This is also where the aforementioned “The Dream” route is. Climbers are actively mapping routes in this area, so there’s lot of potential remaining for first ascents.

Like “Tufa Section” and “Bar Barinsh,” the area is all limestone and many of the routes are sustained tufa lines or sharp pockets. Brar is not climbed as often as other areas, so be prepared to leave some skin behind. The rock is still a little crumbly and not smooth like on limestone routes that see far more climber traffic. 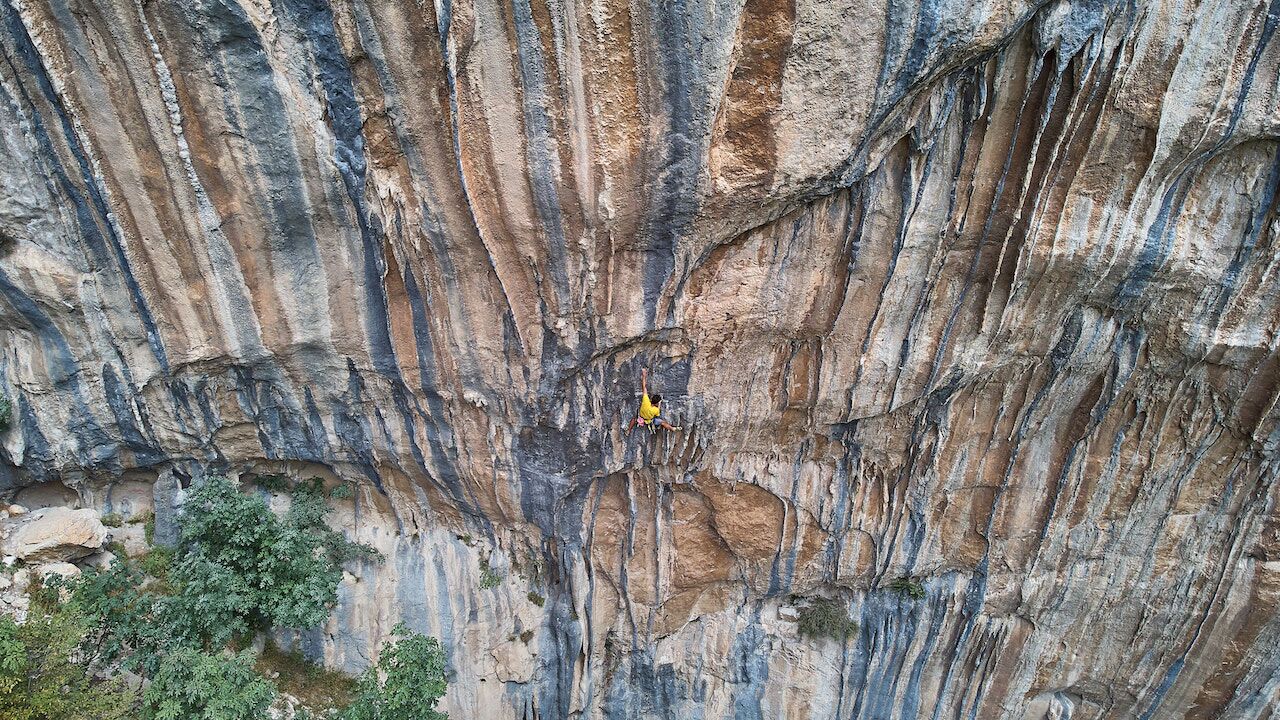 Brar is also not accessible by public transportation (Albania’s public transit system leaves a bit to be desired). But in a few years, the area should be more accessible, especially as most roads are in the process of getting paved. It’s worth the drive, however, and there’s a wonderful cafe (Bar Restorant Shkalla E Tujanit) in the valley that you’ll pass on your way to Brar. Leave time to make a stop on the way home on their back patios to soak up the canyon views (and tend to your various scrapes and scratches).

Sure, climbing in Tirana is still in development, but these three areas have more than enough to fill a climbing vacation, with everything from beginner 5a routes to a 9b, plus a good mix of rock types and styles. Need more info once you arrive? Stop by Tirana’s climbing gym, Rock Tirana, to get the scoop directly from the most local source possible — Albanian climbers themselves.