Although Albania emerged from Communist rule in December 1990, its process of opening up to the world has been slow, and it has been overlooked by even the most adventurous backpackers. Yet, sitting as it does the shores of both the Adriatic and Ionian Seas, between Montenegro and Greece, Albania has a lot to offer. It has stunning, near-empty beaches; ethereal mountains; a rich history. and budget-friendly prices. It’s hard not to be drawn in by this mysterious nation, the homeland of Mother Teresa. One week in Albania is a must for those wishing to explore one of Europe’s lesser-known locations, and here is what to see. 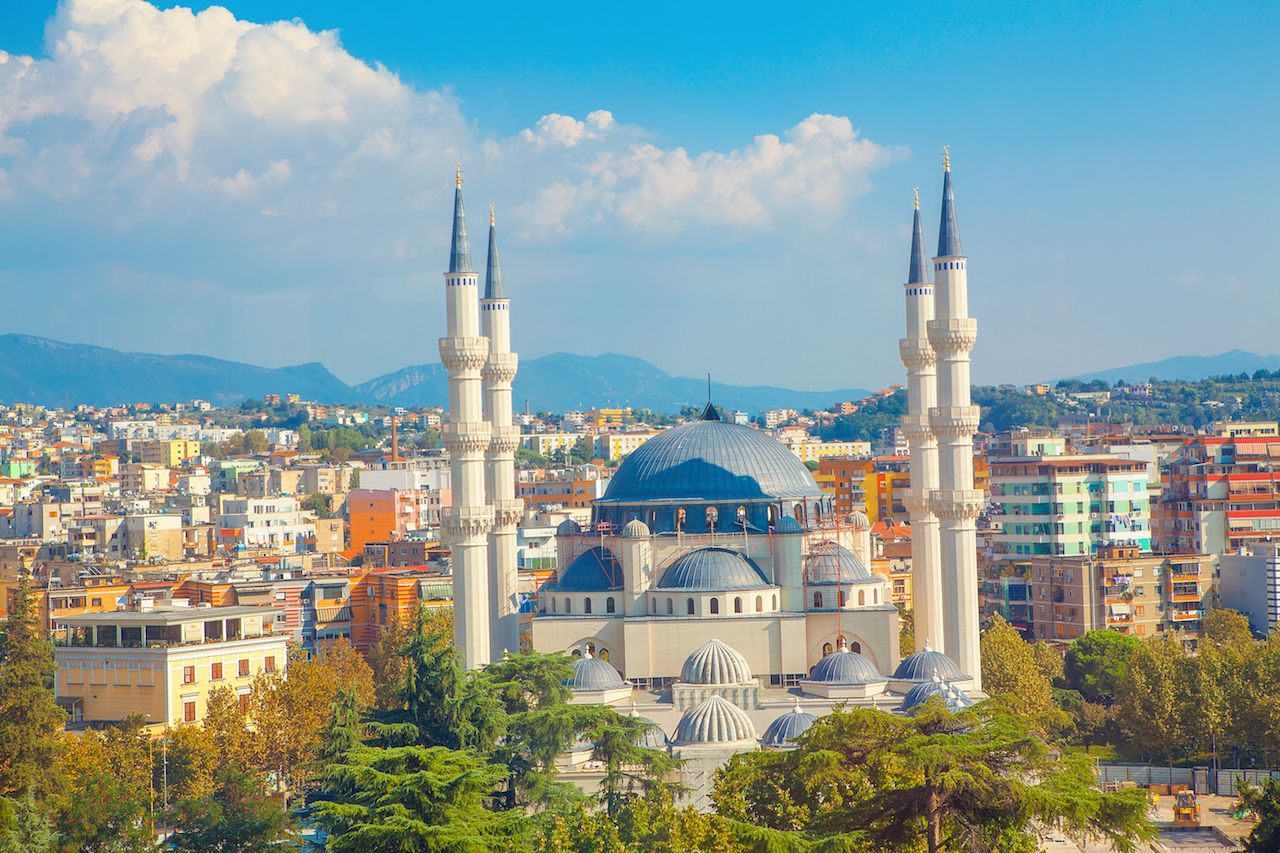 Start your Albanian sojourn in the pastel-colored capital, Tirana. Head to Skanderbeg Square where the great Albanian military leader George Castriot Skanderbeg is immortalized as a statue. Skanderberg is a national hero for the campaign he led against the rule of the Ottoman Empire in the 15th Century.

Next, head across the square to the National Museum of History. Here, you can learn more about Skandenberg, as well as see national artifacts dating back to 2600 BC alongside objects owned by Mother Teresa herself. The 18th-century Et’hem Bey Mosque — a testament to Ottoman rule over Albania until 1912 — sits on the same square. The interior of the mosque is awash in vibrant colors; the ceiling is quite spectacular.

End your afternoon with a meal at Oda, serving classic Albanian fare. The decor is a little eclectic, but the restaurant is considered one of the best in Tirana. Finish your day with a glass of Raki, an anise-infused drink loved in both Albania and Greece. 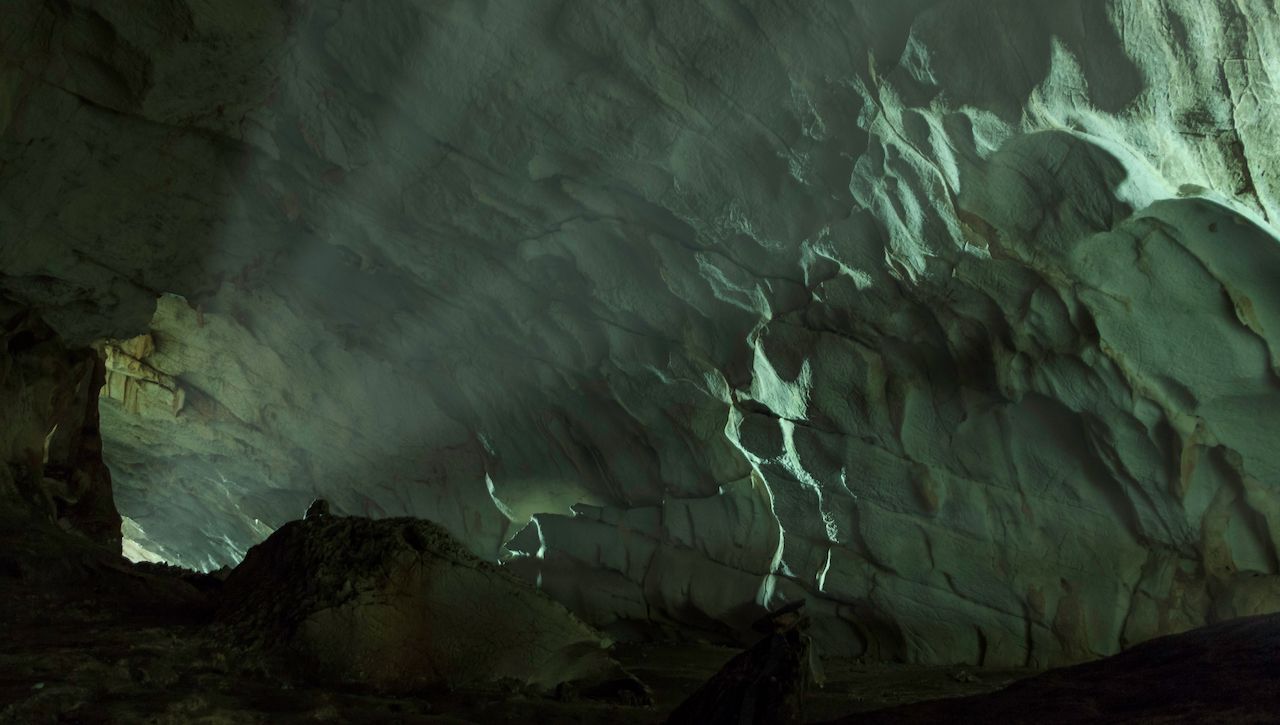 Take a trip to the karst cave system at Pëllumbas, a 45-minute drive outside of Tirana. Dating back 40,000 years ago, the cave system was once home to an ancient species of cave bear. It was also a settlement during the Middle Paleolithic period. One of only six karst cave systems in Europe, the cave cuts 1,200 feet into the slopes of Dajti Mountain and is also a nesting ground for bats.

You will need to hike to get to Pëllumbas. However, on your way make sure to take in the stunning views surrounding you in this dramatic Balkan landscape. On your way back, finish with a swim in one of the fresh mountain rivers, which meander their way towards Tirana.

Sarandë — the capital of the Albanian Riviera 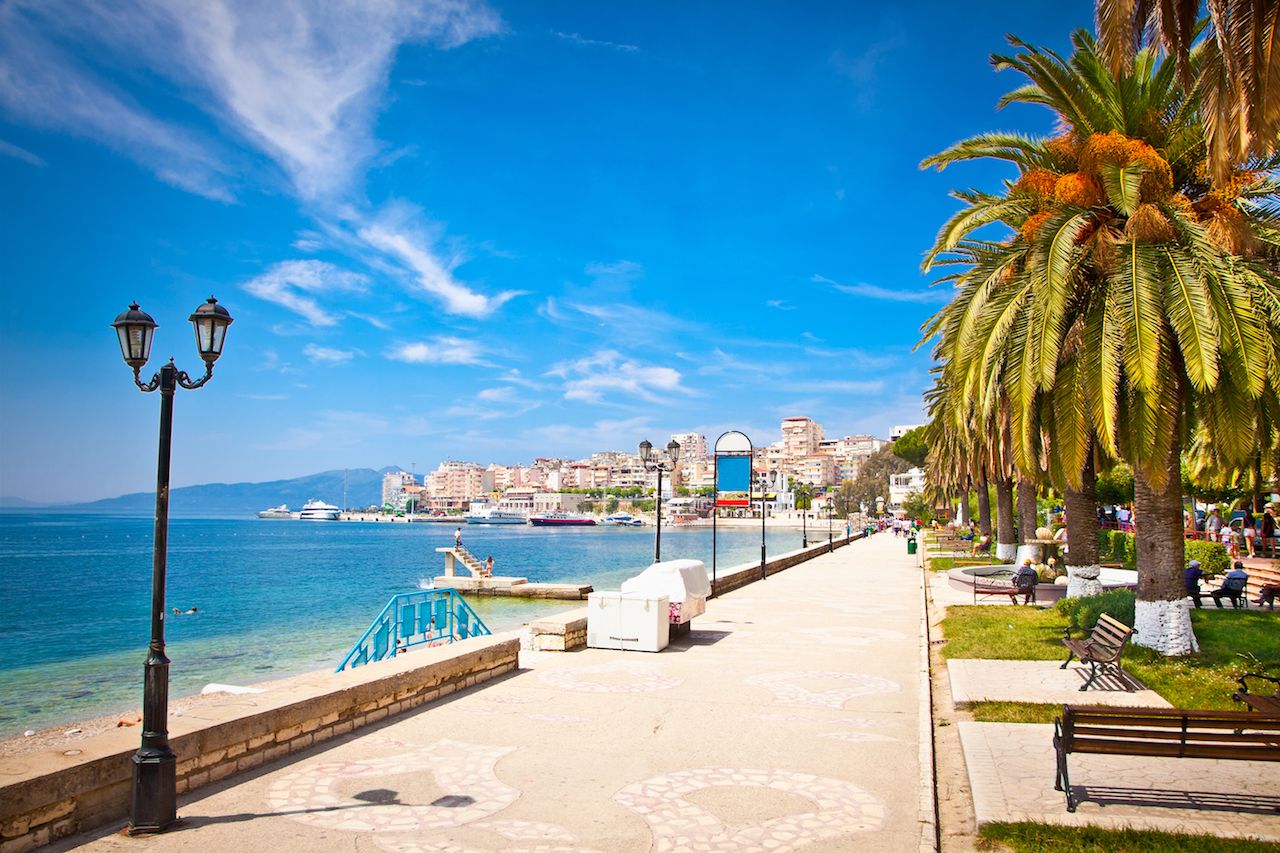 Albania shares the Mediterranean coastline with its southern neighbor Greece. In fact, if you look due east from the coastal region of Sarandë, you would see the Greek island of Corfu. Dubbed the unofficial capital of the Albanian Riviera, Sarandë has become a bustling seaside resort popular with Albanian, Greek, and even Italian tourists.

Although Sarandë takes its name from the Monastery of Forty Saints, dating to 400 AD, which sits behind the town, activities on Sarandë are decidedly more secular. It has beaches and bars aplenty, as well as ample opportunity to take boat trips around this beautiful stretch of shoreline.

Highlights include Mirror Beach, the 16th-century Lëkurësi Castle overlooking the town, and the natural spring Syri Kalter. Syri Kalter, also known as “The Blue Eye” is located 14 miles inland from Sarandë. It’s a stunning natural spring where water bubbles up from a depth of 160 feet. In the evening, take time to relax along the promenade, enjoy Raki cocktails, and watch the sunset over the Ionian Sea.

Butrint — one of the oldest cities in Europe 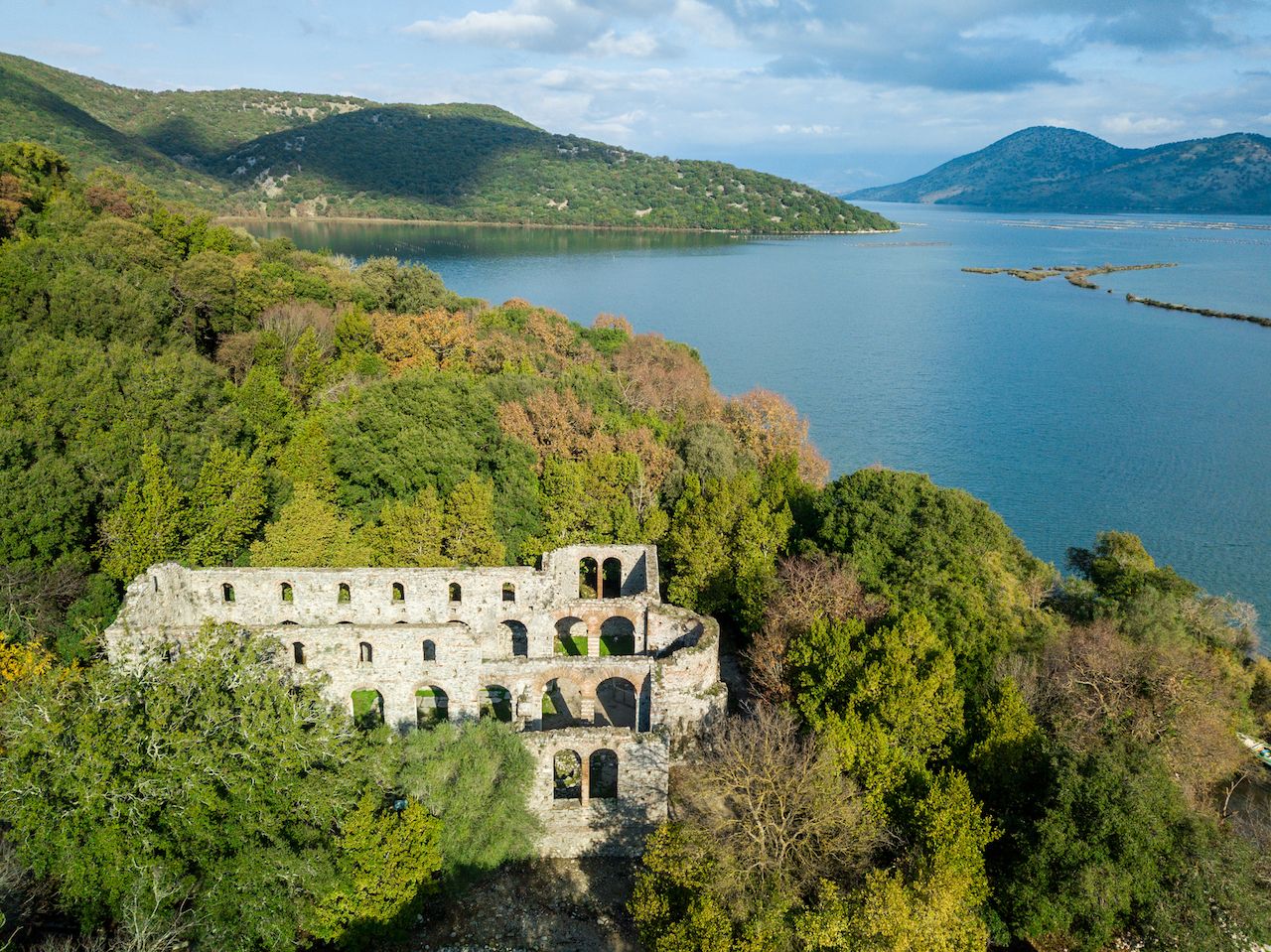 Drive 10 miles south of Sarandë and you’ll find Butrint. The ancient Greek and later Roman city is believed by some to have been founded in 12 BC. With its basilica, acropolis, agora, amphitheater, and baptistry, Butrint earned a UNESCO World Heritage designation in 1992. It became a national park in 2000 and is widely considered one of the most important archaeological sites in Albania. Lying within its own national park, Butrint is an absolute must for anyone in the Southern region of Albania. Day trips are available from Sarandë.

Gjirokastër and Berat — history of empires 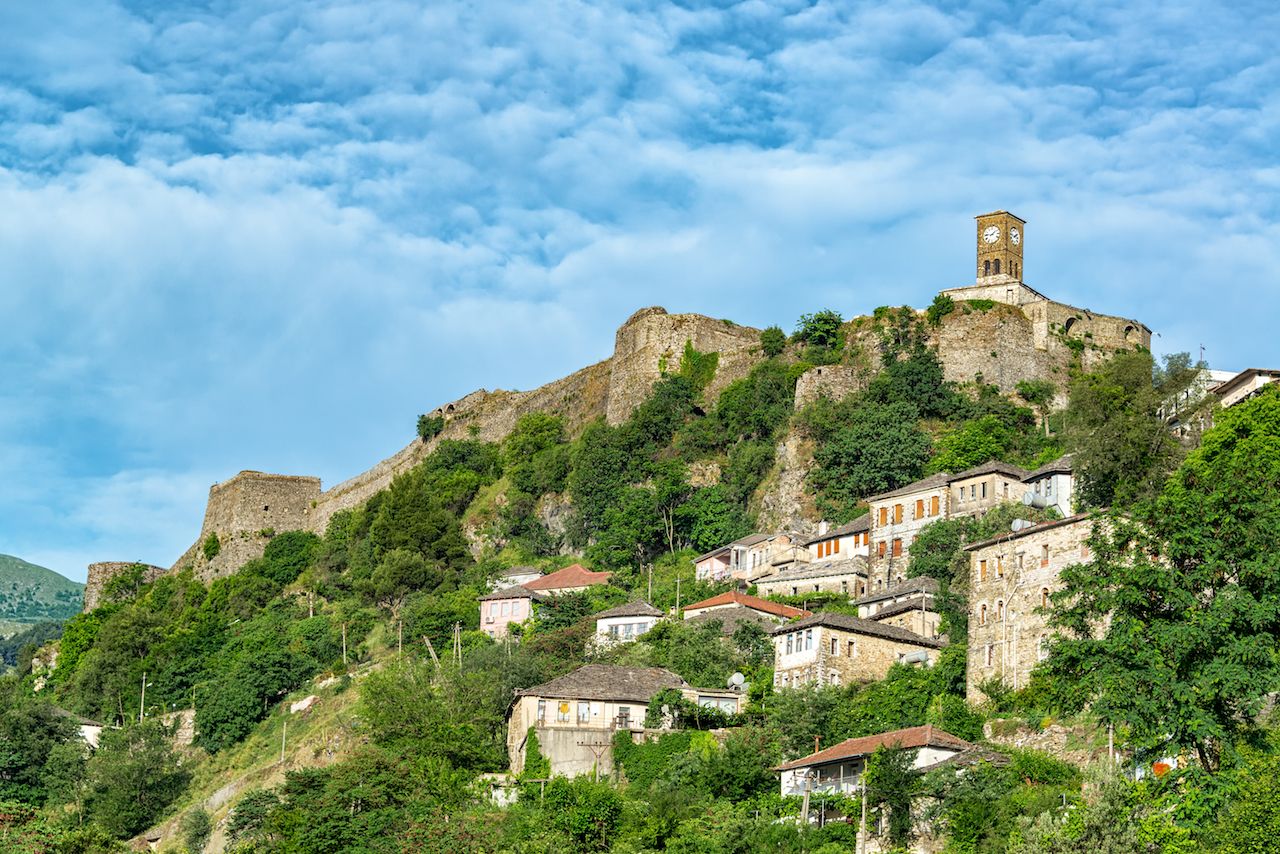 Gjirokastër was named a UNESCO World Heritage site in 2005, with nearby Berat receiving the honor in 2008. Known as the Historic Centers of Berat and Gjirokastër, the two majority Greek ethnic towns are regarded as two of the best examples of multi-civilizational architecture in Albania. Berat showcases Illyrian, Greek, Roman, Byzantium, and Ottoman architecture and comprises an old fortified city filled with churches and mosques. The town, which became part of the unstable frontier of the Byzantine Empire following the fall of the western Roman Empire, is also known as the City of a Thousand Windows. Highlights include Berat Castle and the medieval Byzantine churches of Holy Trinity and St Michaels.

Gjirokastër, on the other hand, is regarded as one of the finest surviving examples of an Ottoman Town in the world. Highlights include the 18th-century Bazaar Mosque, the Old Quarter, the 12th-century Gjirokastër Fortress, and the childhood home of Enver Hoxha, the infamous Albanian head of state who ruled the country for 41 years. On history alone, Gjirokastër and Berat should be high on anyone’s list of priorities when visiting Albania.

Apollonia — one ancient school of philosophy 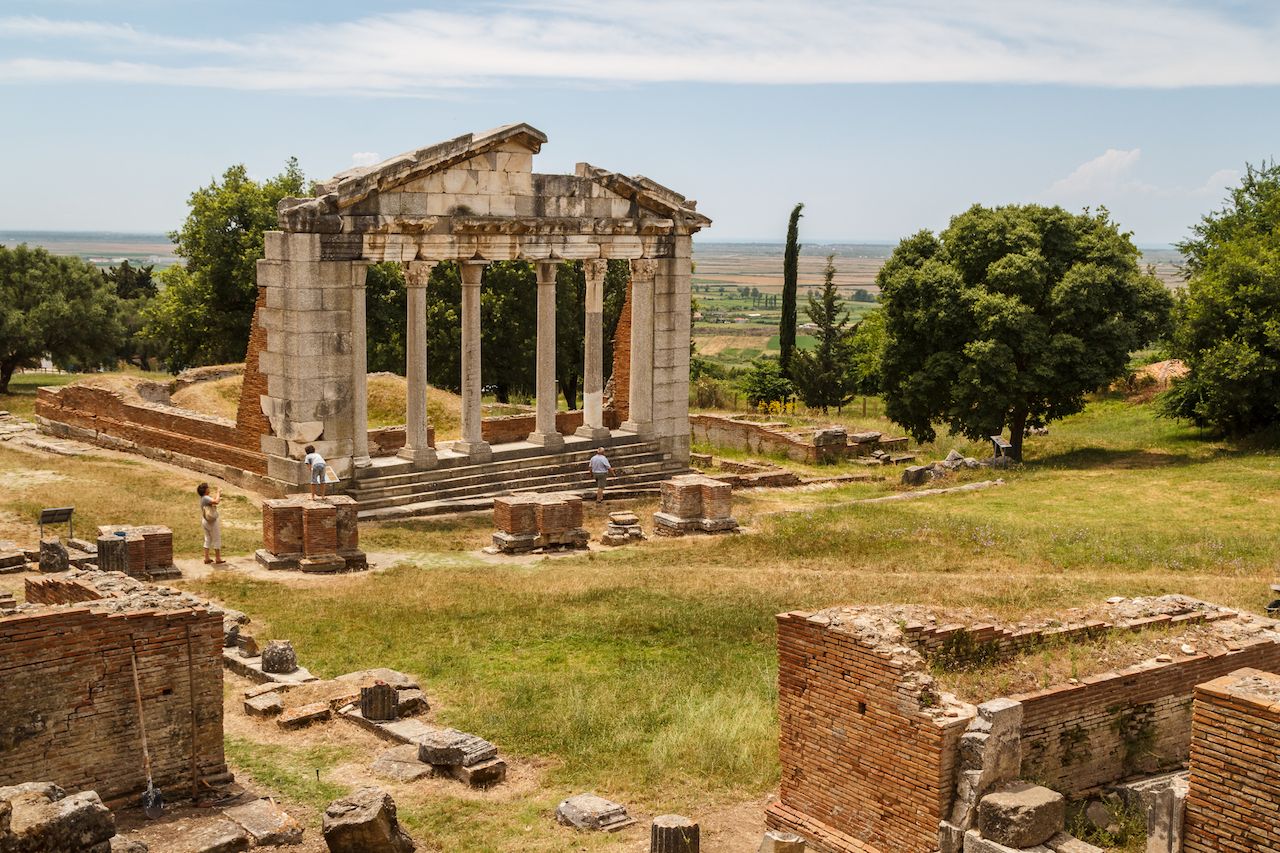 Abandoned by the end of the late Antiquity and later rediscovered in 1915, Apollonia flourished in the Roman period and was home to a renowned school of philosophy but began to decline in the third century AD. A visit to Apollonia is a must, regardless if you’re a veteran Classist or a newbie to Roman history. Highlights include the Monument of Agonothetes and the Church of St. Mary. Visit Apollonia in the evening and watch the sunset upon this ancient wonder as you ponder Apollonia’s fascinating Grecian history.

Road TripsHow To Plan the Ultimate Road Trip Through the Balkans
Tagged
Culture Travel Insider Guides Albania
What did you think of this story?
Meh
Good
Awesome