You may be used to photographs that focus on the big picture, whether it’s sweeping mountainous landscapes or jaw-dropping photos of the Milky Way. The Close-Up Photographer of the Year award celebrates photography on a smaller — but no less meaningful — scale. Showcasing the world’s best close-up, macro, and microphotography, the awards consist of seven categories: Animals, Insects, Plants & Fungi, Intimate Landscape, Man Made World, Micro (photos taken via a microscope), Young (for photographer under the age of 17). The 100 total winners were chosen from over 6,000 entries all around the world, but these stunning photos took home the top prize in each category.

“I spotted this eel larva off the island of Lembeh (Indonesia) during a blackwater dive. Blackwater diving is essentially diving at night in the open ocean, usually over deep or very deep water. Divers are surrounded by darkness, with only a lit downline as a visual reference. Peering through the darkness with your torch can be quite stressful the first time you do it, but it gets fascinating quickly. What makes blackwater diving so magical is the abundance of rarely seen planktonic creatures you spot as they take part in one of the largest daily migrations of any animal on Earth. After sunset, small pelagic animals (like this larva) rise close to the surface to feed where the sunlight has allowed planktonic algae to grow. At sunrise, they dive into the depths and stay down there during the day to escape predators.” 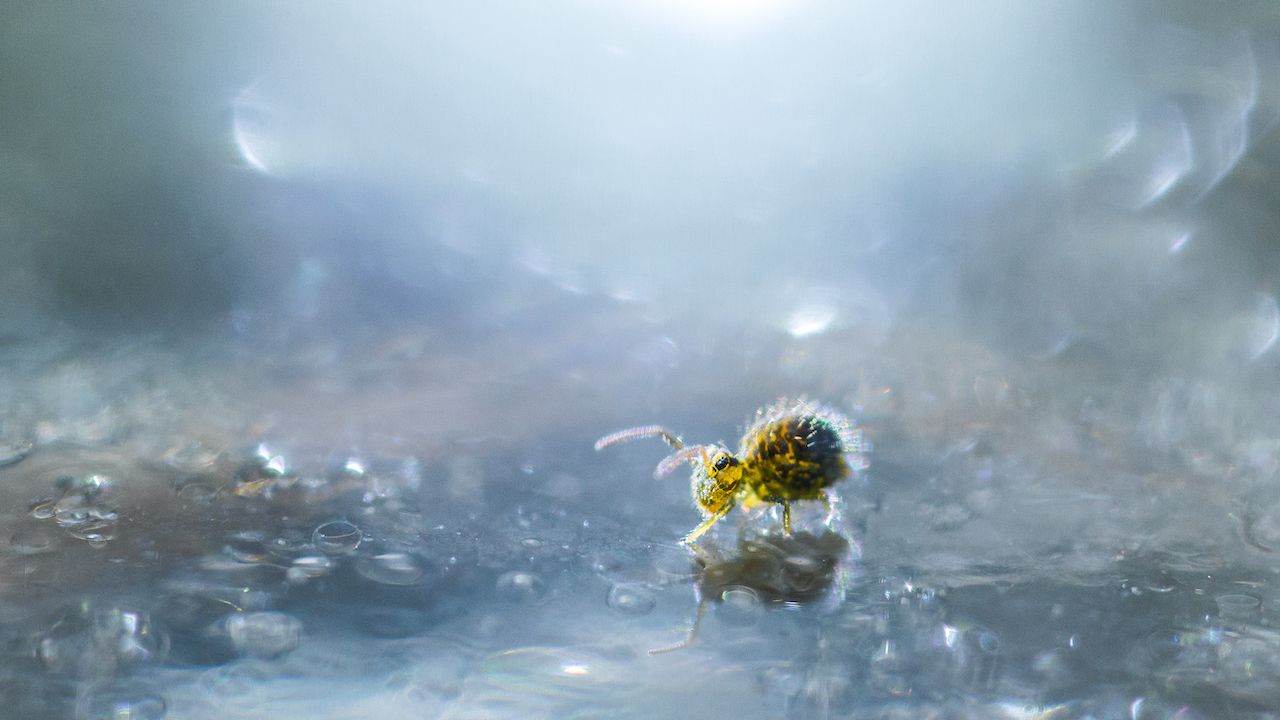 “I regularly visit a meadow near my hometown of Csongrád-Bokros, Hungary, observing the site in all seasons. The meadow is grazed by Hungarian grey cattle, which keeps the place in relatively good condition. One frosty winter’s morning I headed out to take some extreme macro shots at the surface of some frozen water that had pooled in the tracks left by a tractor. Crouching down, I spotted some yellow globular springtails (Sminthurus maculatus) which feed in the sun rays reflected from the ice. I used LED torches to illuminate one of them, and came away with a picture that celebrates this tiny creature.” 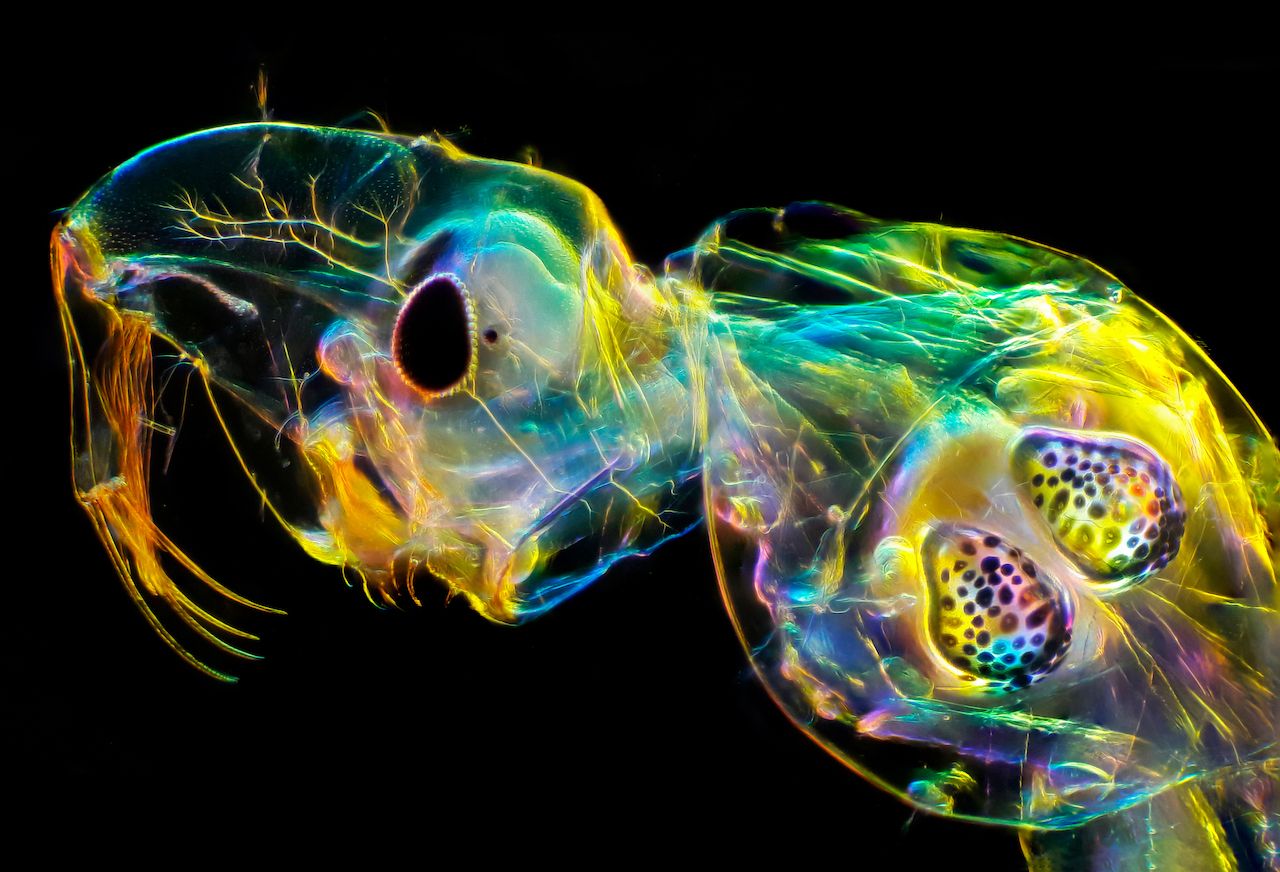 “Glass worms can vary in length from about half an inch to two inches. On the right side of this image you can see the large tracheal bubbles that serve as hydrostatic organs (or swim bladders). These bubbles allow the larva to keep its horizontal position in the water column, while also helping to regulate the depth of its immersion. The bubbles are covered with dark pigment cells that can resize — if the cells expand due to absorption of light, the tracheal bubbles heat up and increase in volume, reducing the weight of the larva and causing it to float up. To create the picture here I made a panorama of eight frames, each of which was focus stacked. To make the image as detailed (and aesthetically pleasing) as possible I used darkfield and polarisation techniques.” 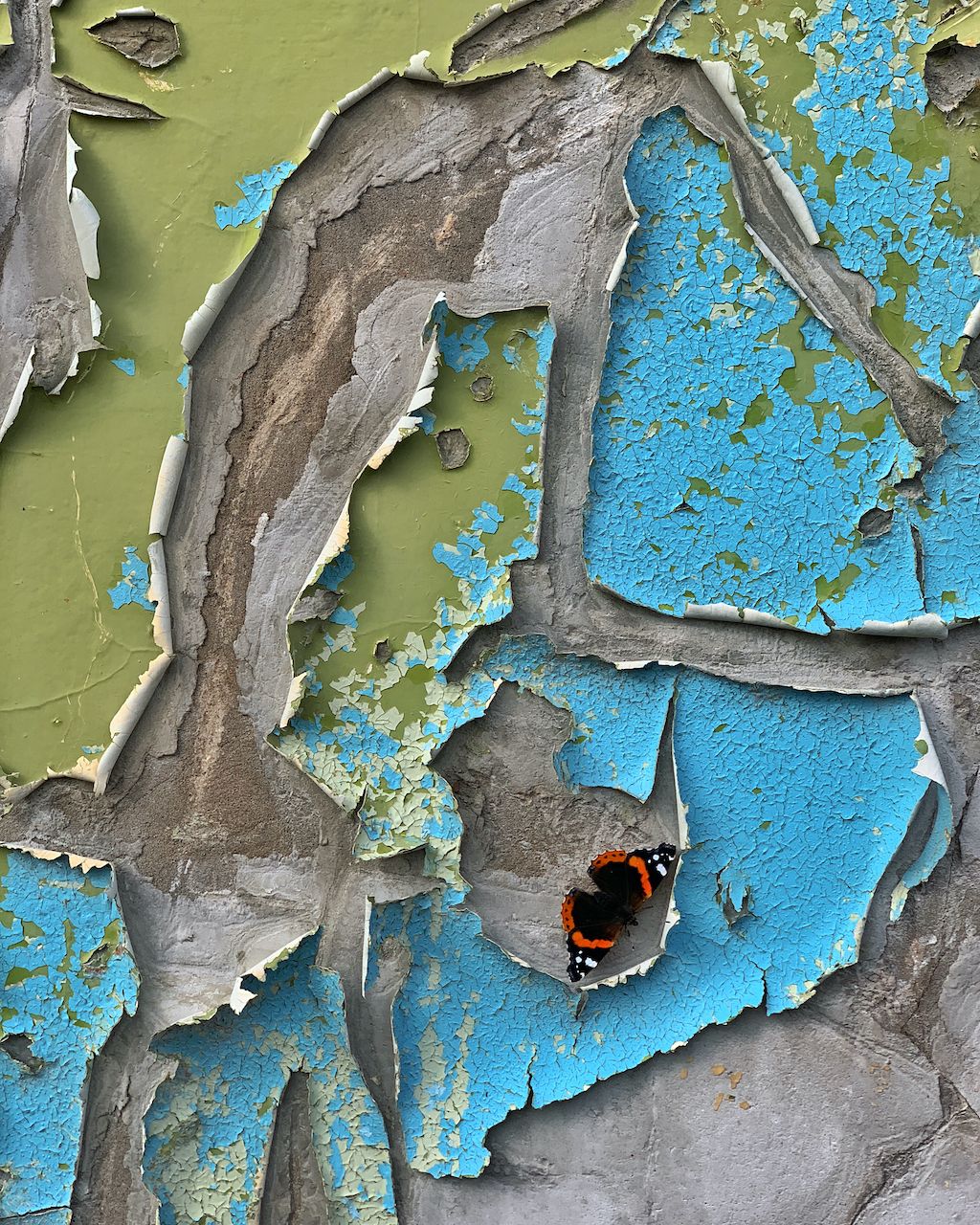 “I was visiting Goole, the town where I was born in East Yorkshire, in 2018 as my dad was very ill in hospital. To take my mind off things I went for a walk with my wife Justine. There had been no time to pack really so all I had with me was my iPhone XS. We were walking towards the docks when I saw some beautiful peeling paint on an abandoned building site. I went over to photograph it when Justine asked if I had noticed the butterfly too. I hadn’t as I was miles away, but I had already captured this image serendipitously. It felt a surreal moment as my dad particularly liked butterflies and always commented that they represented relatives who had passed away, making it even more poignant. Unfortunately he passed away shortly after, so this is a special photograph for me.” 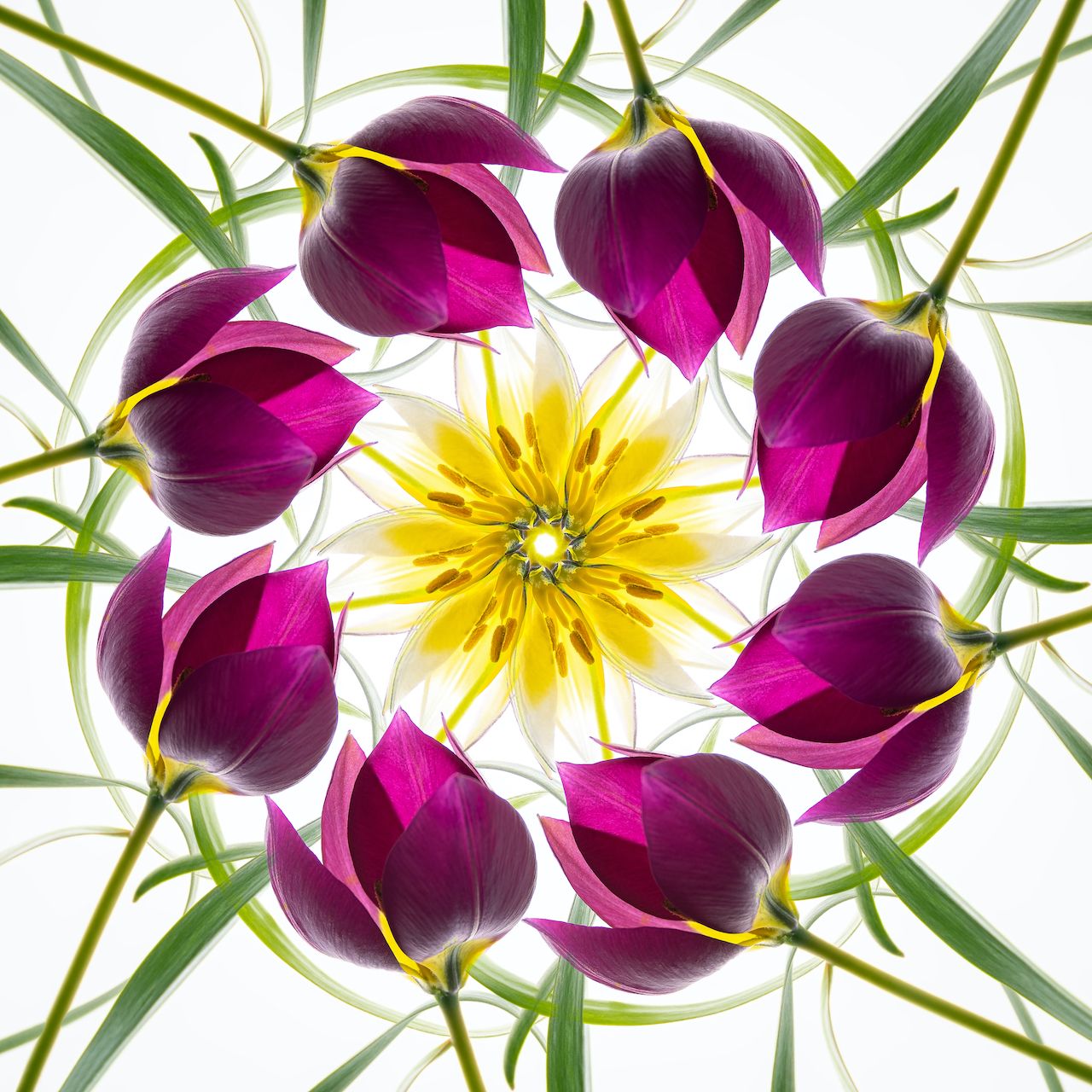 “My goal with this photo was to create art that challenges the viewer to look at the natural world with fresh eyes. I collected some miniature tulips from my garden and placed them on a lightbox. The vivid yellow centres were so striking that I decided to create a composition that would show both a side view and a centre view of the plants. The tulips were photographed and rotated at eight equidistant positions to complete a full rotation; it’s a technique that I call Precise Incremental Rotation. An in-camera multiple exposure of eight frames was used to create the effect. The characteristics of the tulips are really emphasised when rendered within the rotational symmetry of the mandala form. The curved green leaves make a great frame for the flower, while the centre of the design highlights the tulip’s anthers.” 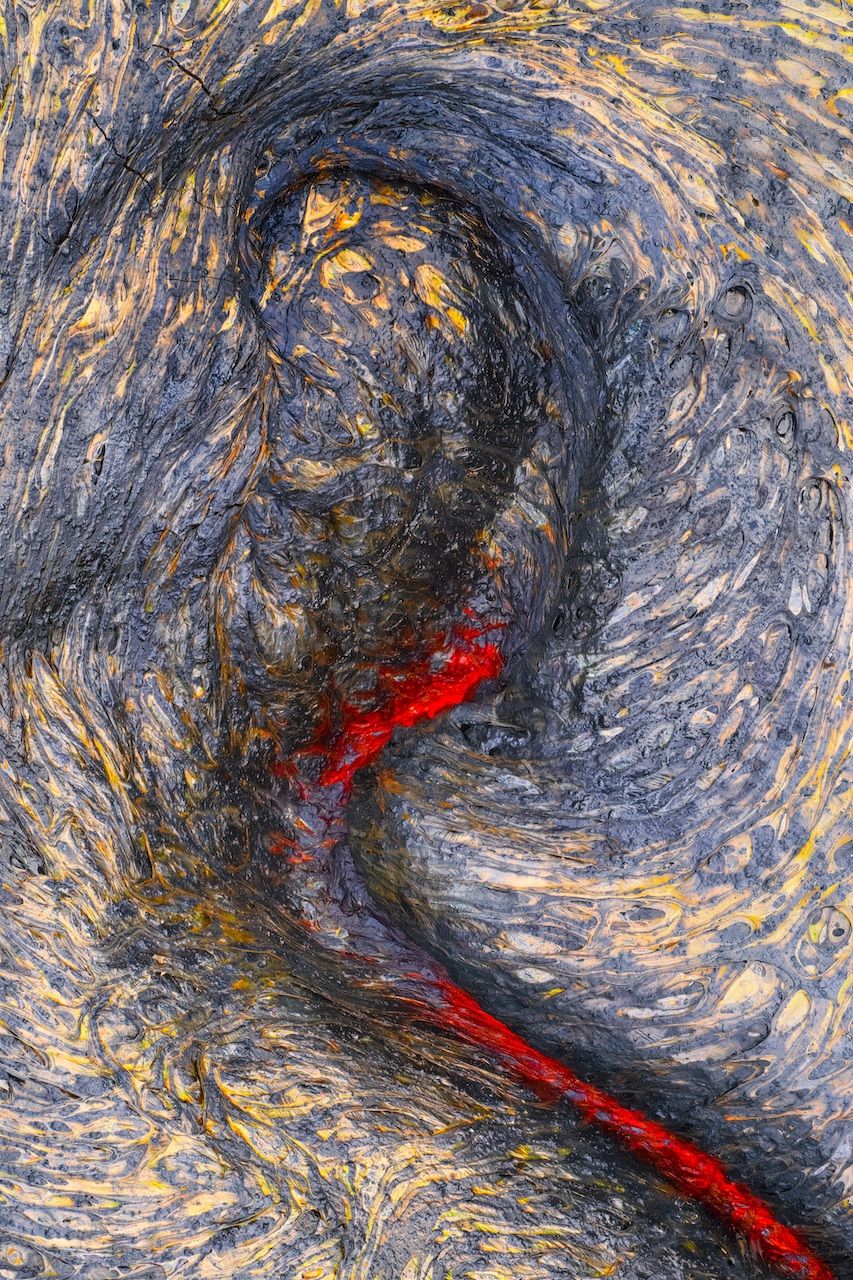 “Trekking across the baking lava of the Kalapana lava field in Hawaii, was an experience not to be forgotten. Incredible organic structures of black, blue, gold and bronze seemed to overwhelm the senses, but eventually the increasing presence of sulphur dioxide and other acidic gases, acted as a reminder that I was walking on an erupting volcano. Heat was rising from every crack in the rock, and before my very eyes the rocks would turn orange and suddenly begin to flow. New land, rock and stone was being created just meters away from me. I had just seconds to capture this image of a lava flow setting into the form it would retain for millions of years. The glass-like rock was still glowing below the surface, but soon enough a new lava flow started centimetres from my feet and I was forced to retreat.” 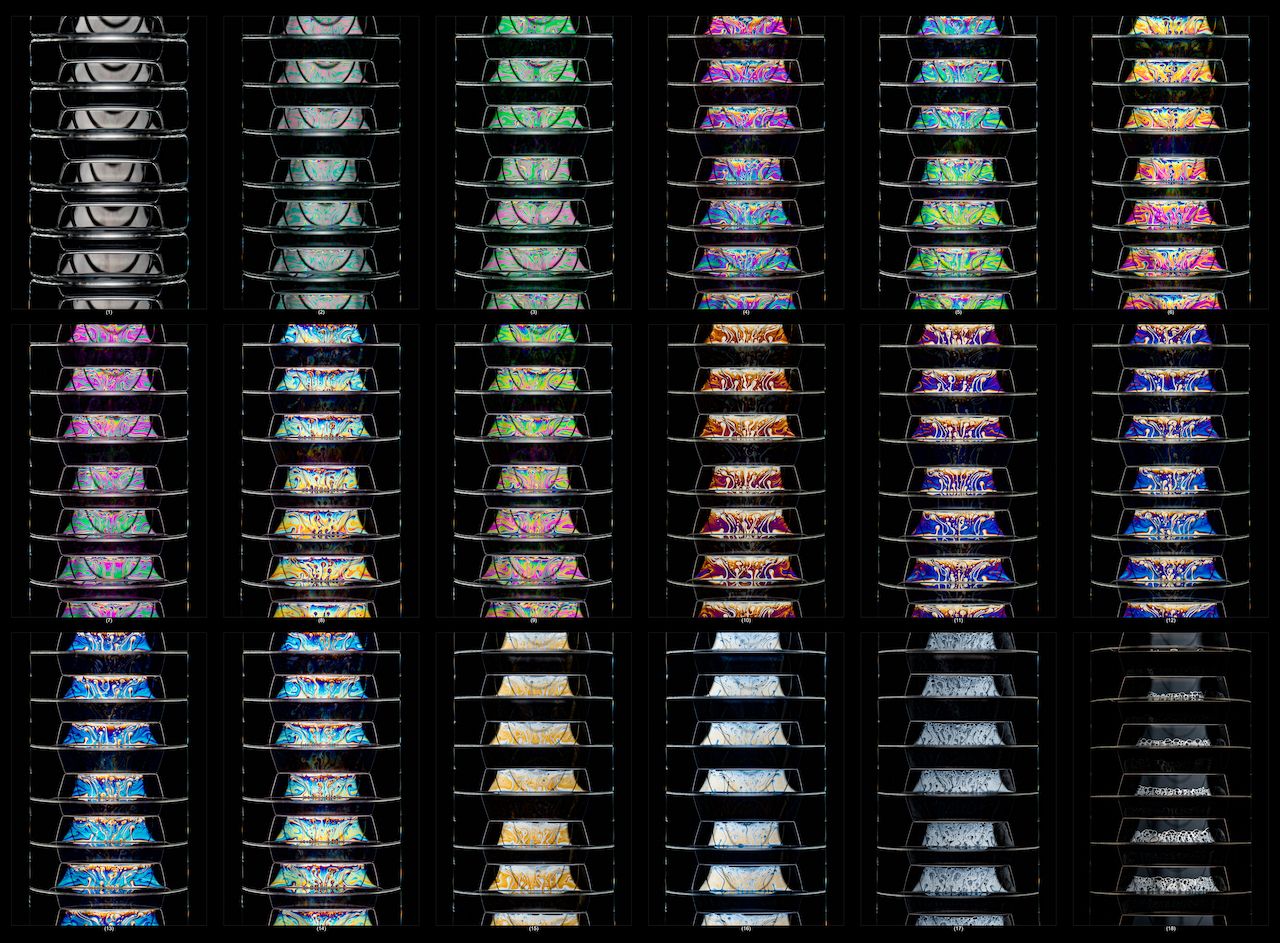 “This series of time-lapse photographs shows columns of equally sized soap bubbles in a glass, cylindrical tube. Each photograph — there are 16 in total here — illustrates light interference colours and patterns responding to directional light. Swirling patterns of colour are created because bubbles are made of a liquid that continually flows, swirls, and drains quickly, and in all directions. Light waves reflect and refract through the bubble walls.

Variations in thickness cause variations in colour and intensity. The speed at which colours and patterns change is phenomenal. The light interference cycle only takes a few seconds to complete. This was photographed in my studio/lab in May 2016 as part of an Art+Science collaboration with Prof. Stefan Hutzler, Leader of the Foams + Complex Systems Group, School of Physics, Trinity College Dublin.”

NewsThe winners of the International Photography Awards revealed, and they’re stunning
Tagged
News Photo + Video + Film
What did you think of this story?
Meh
Good
Awesome

Airbnb wants to set you up rent-free in a designer house in Sicily for one year
These countries will require a COVID-19 booster shot to get in
Britain will no longer require COVID-19 testing for vaccinated travelers
Every type of mask you’re allowed to wear while flying
Who owns the world’s strongest passports in 2022?

Wildlife Photographer of the Year 2020 shows a ‘planet under pressure’