Nothing brings you closer than sleeping in a trailer. Now, this might not be an ideal situation, depending on who you’re sharing said trailer with. But if you’re looking for some seriously-intimate time with your significant other, or just want your kids used to being around live people, road tripping with a trailer is a fantastic summer vacation.

Rather than renting through a cookie-cutter trailer service, you can browse Outdoorsy, which is like Airbnb for quirky trailer and RV rentals. Part of the fun when trailer tripping is meeting interesting people in the spots where you stop for the night, and renting any of these unique, artful, and sometimes-luxurious trailers will have plenty of people stopping to ask about them. 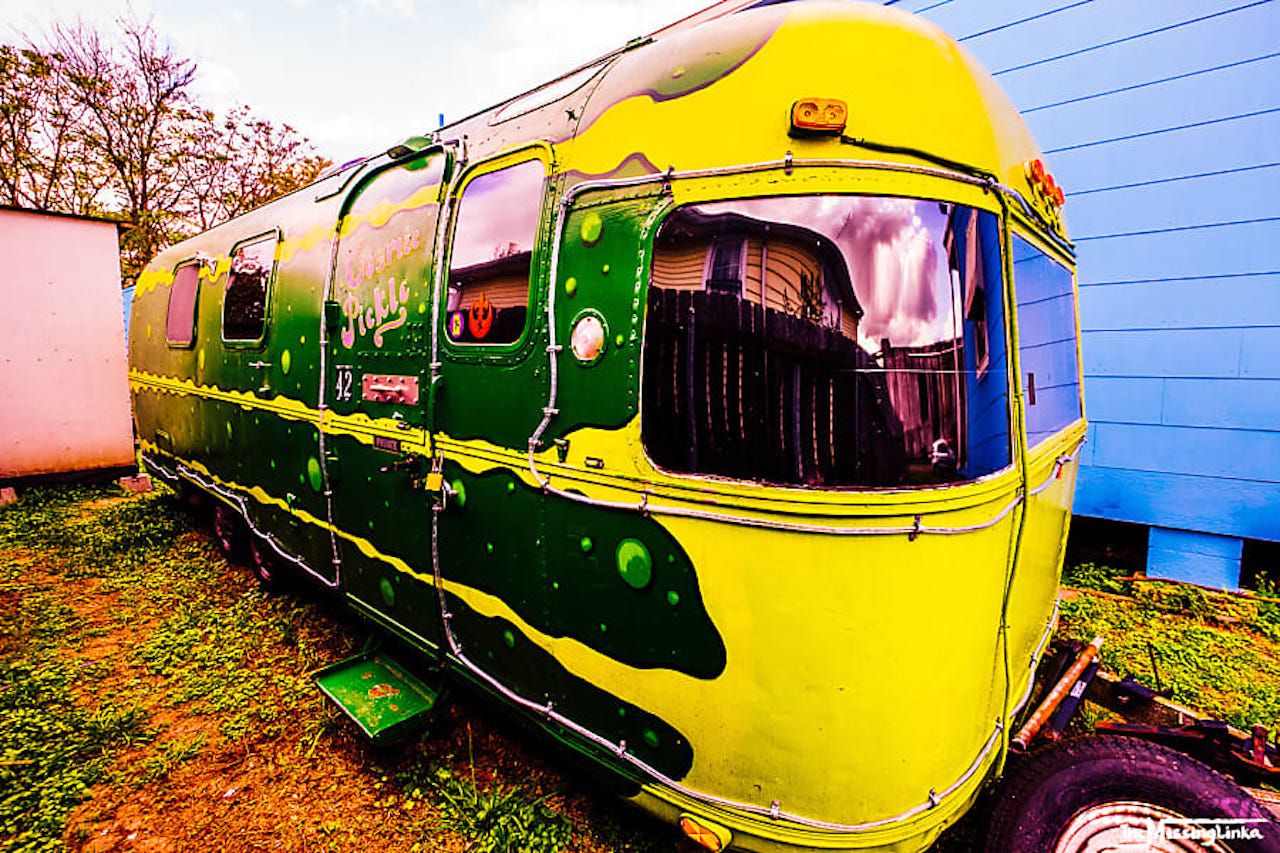 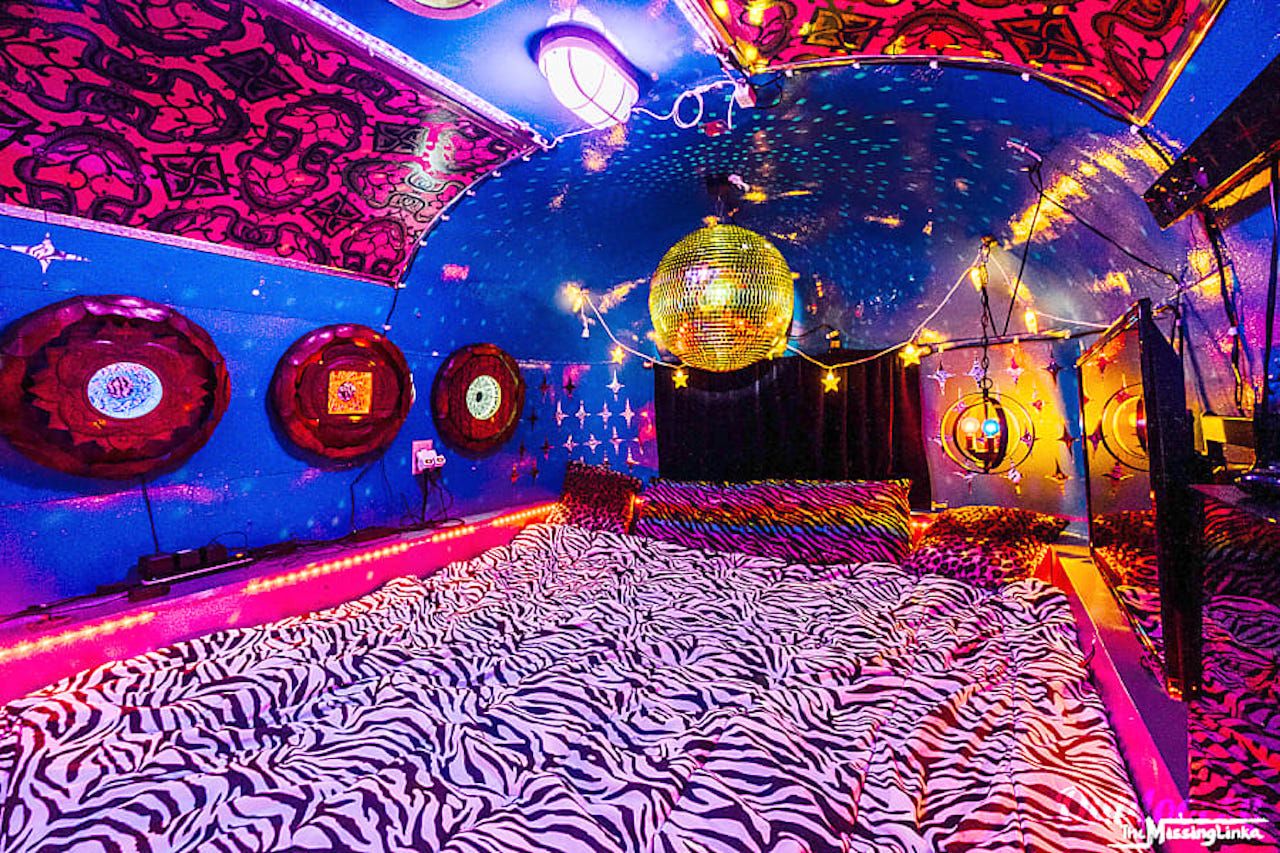 If you ever sat back and thought, “You know, someday I’d like to take a 1970s porn producer’s mansion, compress it into an airstream trailer, and spend my vacation living there,” well, your wish is granted. This 1976 Airstream Argosy takes all the trademarks of ‘70s swing — Posturepedic bed, restraint mounts, a disco ball, and a stripper pole — to create the ultimate late-century sex den. It’s even got a front office for any last-minute casting calls, and a mirrored bathroom so you never have to stop looking at yourself the entire time. Perfect for the adventurous couple, or to reserve for elderly relatives for your personal enjoyment. 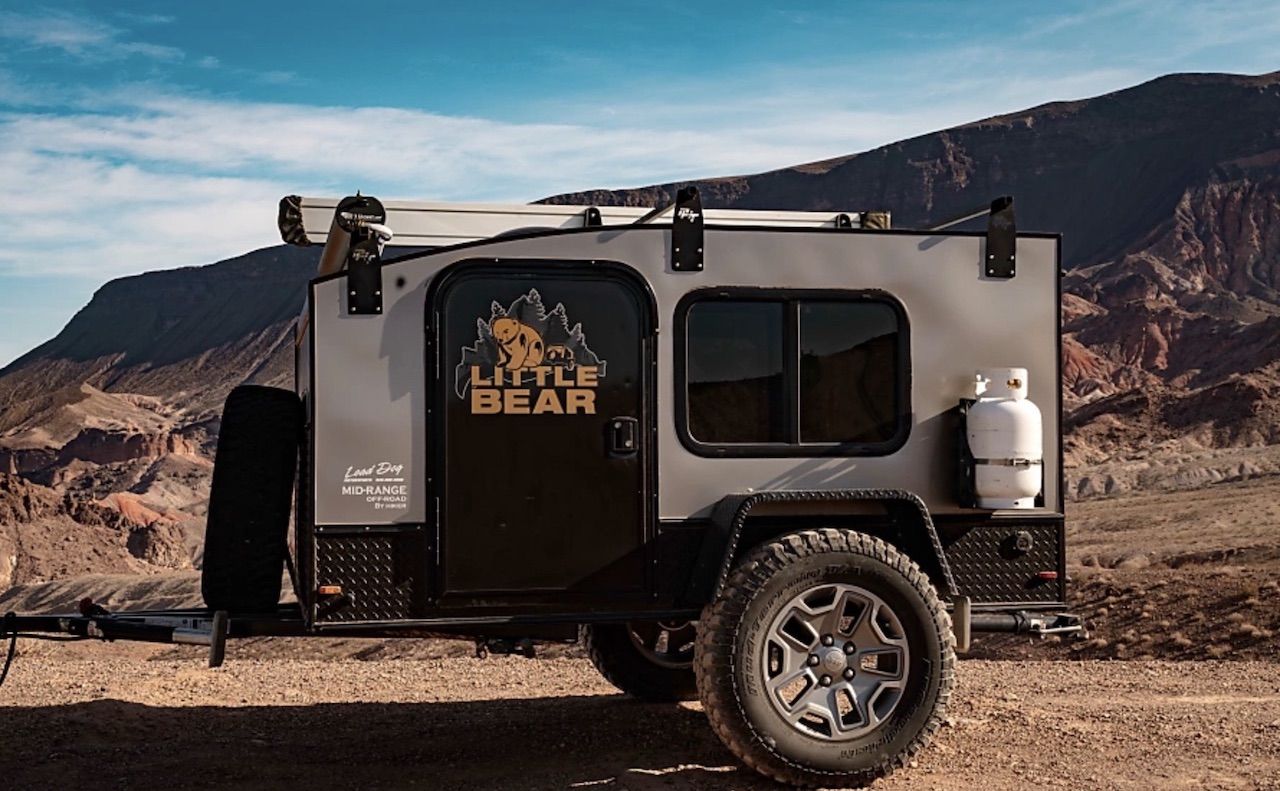 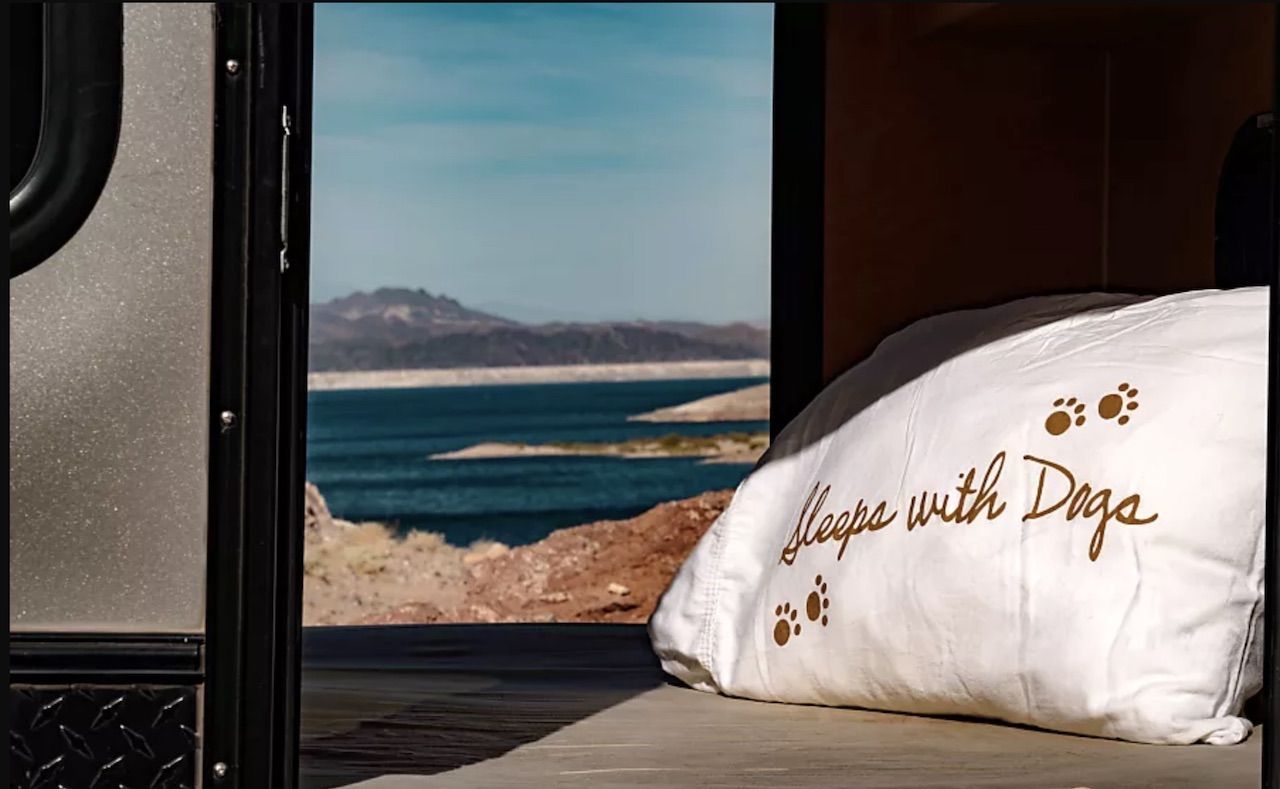 If a hard-core, big-wheeled jeep and a camping trailer had a spunky love child, it would look something like this camper available in Nevada. The massive tires allow you to tow it pretty much anywhere, so you can camp wherever you darned well feel like. If the charm of a desert campfire is lost on you, it comes complete with a propane-powered range for all your meal prep needs. It’s also got an outdoor shower, a little slice of luxury resort out in the middle of nowhere. For those who want to get off the grid but still have a nice mattress to retire to at night, this teardrop is for you. 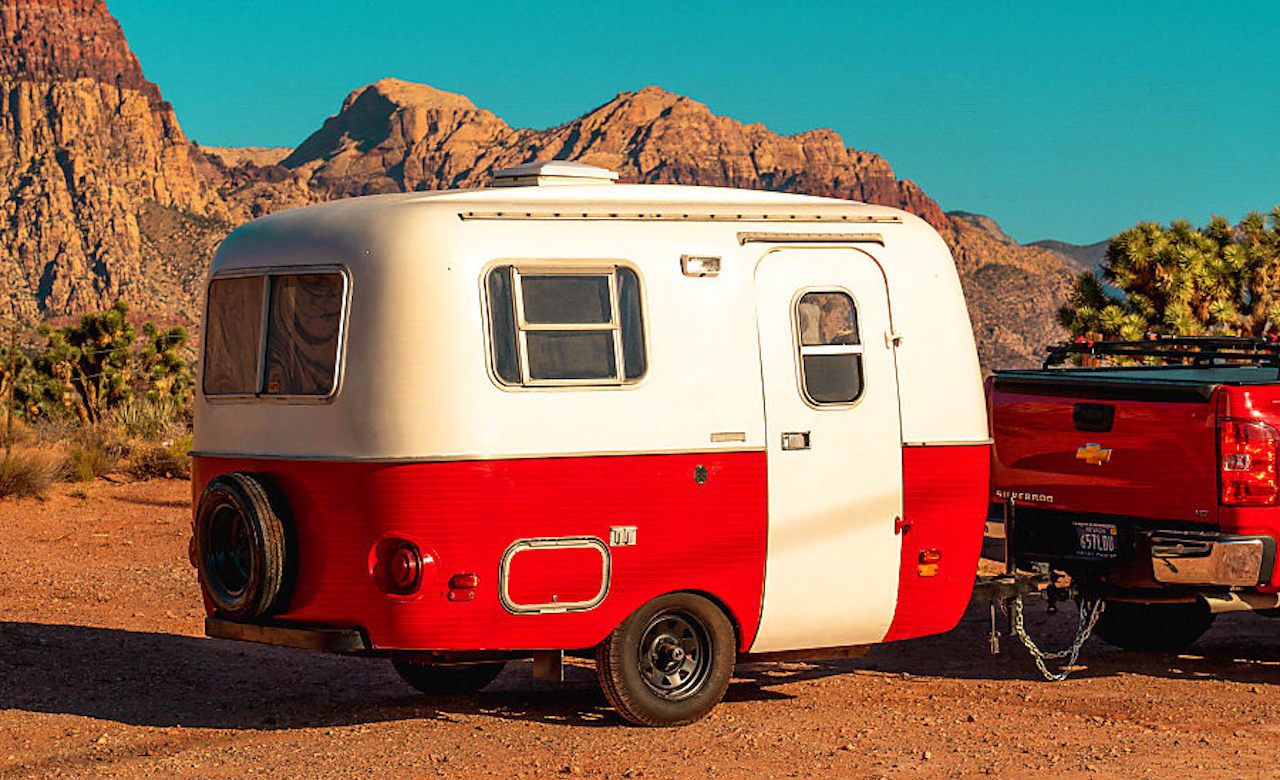 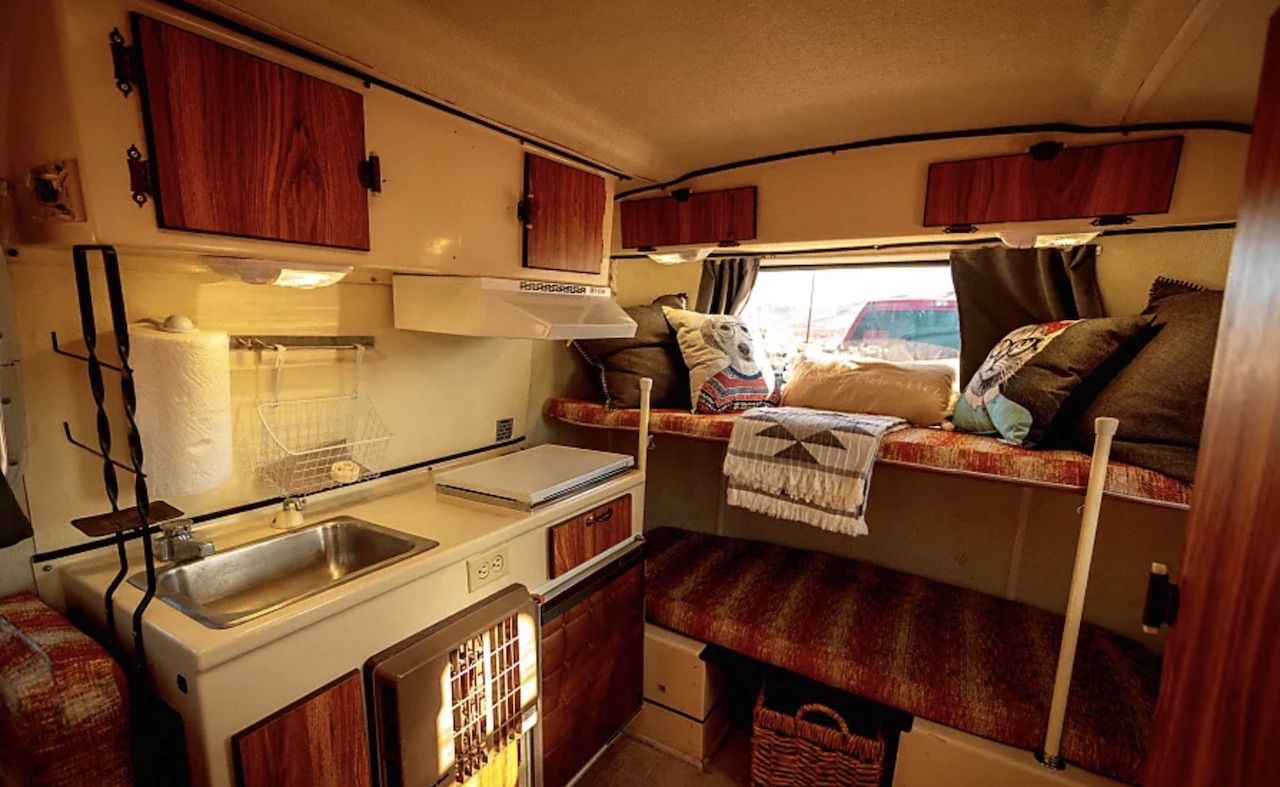 Throw it back to family vacations of yesteryear, when cars got six miles to the gallon and road trips were still cheaper than flying. This red Boler trailer has three beds and sleeps four people — perfect for two parents and two kids to sleep in. Hard to believe by the size, but when the beds are folded up the trailer boasts a full dining room table, too, where you can eat full family meals prepared in the trailer’s kitchenette. Plus there’s plenty of storage so your car isn’t crammed with clothes. 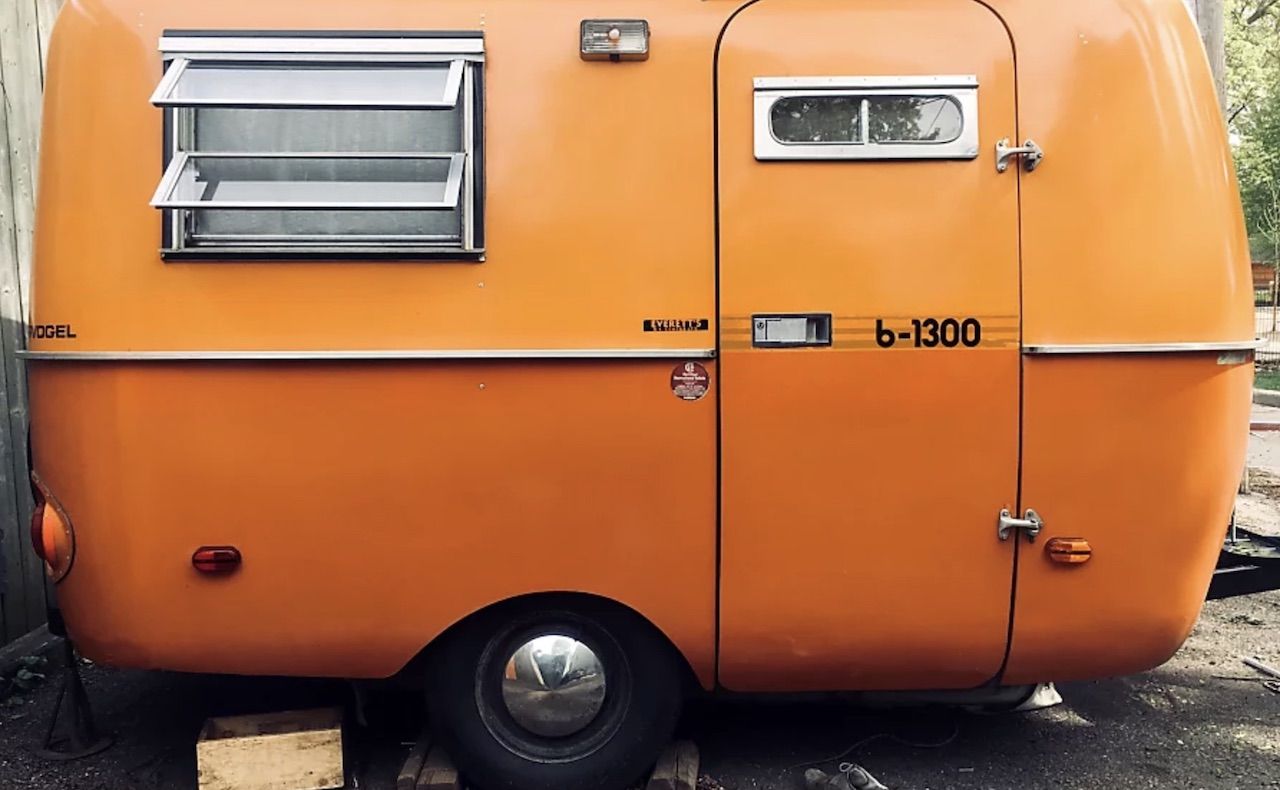 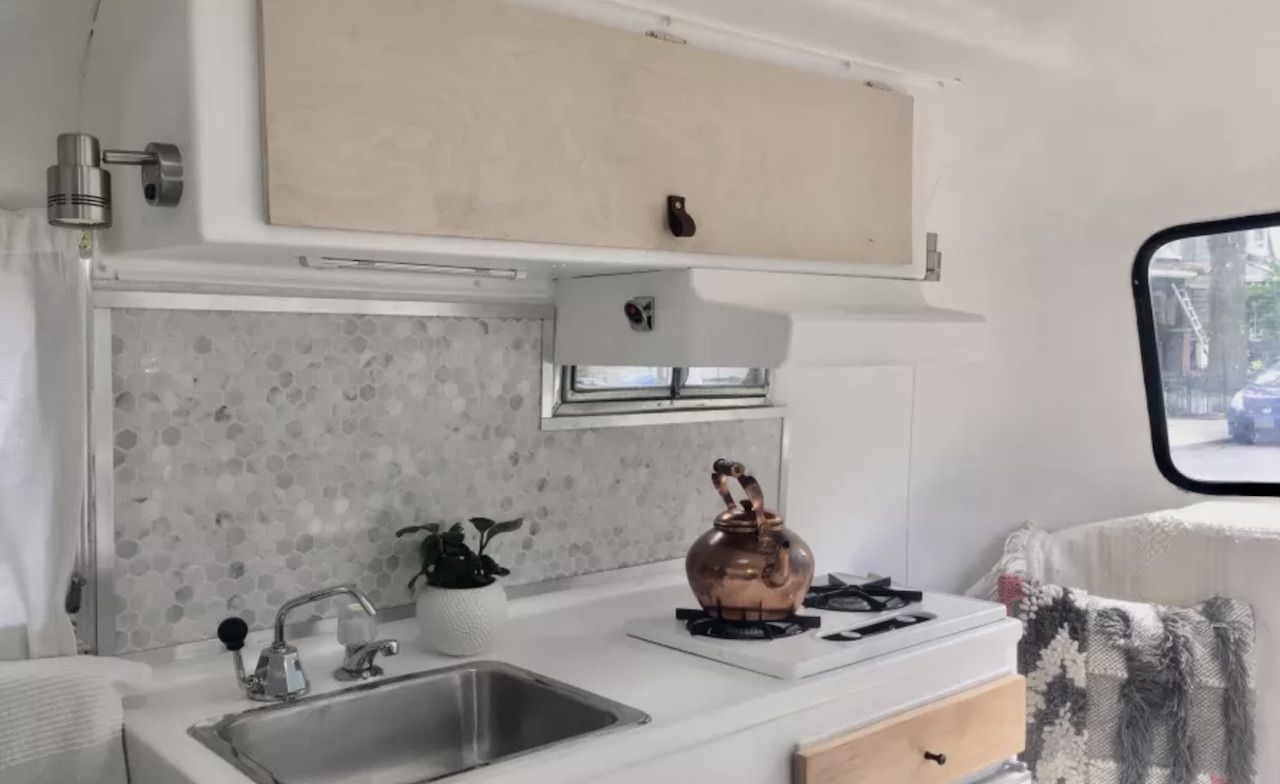 If Cinderella’s carriage had some kind of magical glitch and got stuck halfway into its transformation back into a pumpkin, it would look exactly like this. The lightweight, fiberglass Boler trailer sleeps four comfortably and has been bibbity-bobbity-booed on the inside to transform it from ‘70s shag into modern Scandinavian chic. The kitchen comes complete with a gas range and three-way fridge, allowing for grand feasts in the dining room. Which also doubles as a sleeping room at night. It even has USB chargers on board so you won’t have to disconnect at all while communing with nature. The light body makes it especially easy on your gas mileage, by trailer standards. Especially useful north of the border where gas costs somewhere around $4 a gallon. 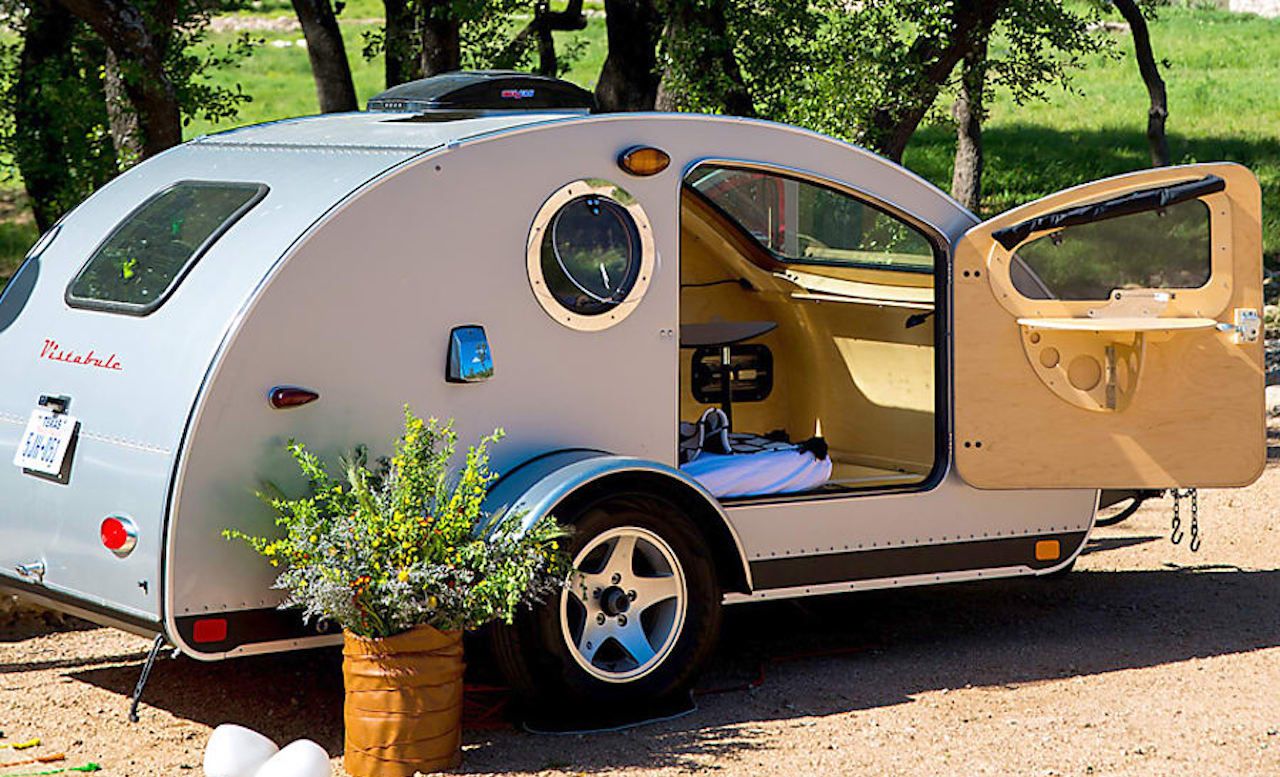 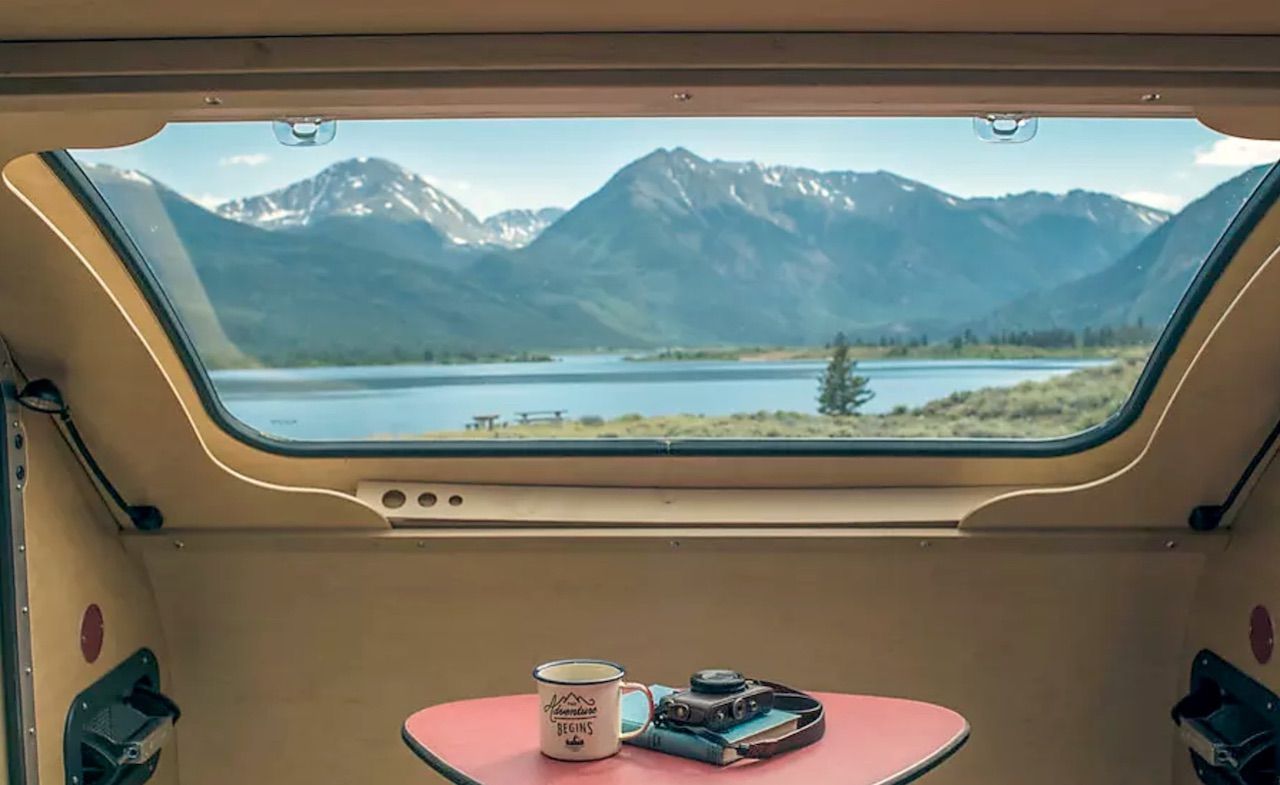 Need to slip into a food coma immediately after stuffing yourself into oblivion at Salt Lick BBQ? Book yourself into Louise, a compact little trailer the owners are happy to deliver to any park in the greater Austin area. This 2018 Vistabule is also perfect for campground hosting, with a back-door kitchen and side-out for a cooler. You’ll also get cold running water and ice cold AC, especially important if you’re planning to visit Texas in the summer. If you’d rather let nature cool you off, Louise has large windows to let in all the fresh air. And at night you can gaze up and see if the stars at night are, in fact, big and bright deep in the heart of Texas. 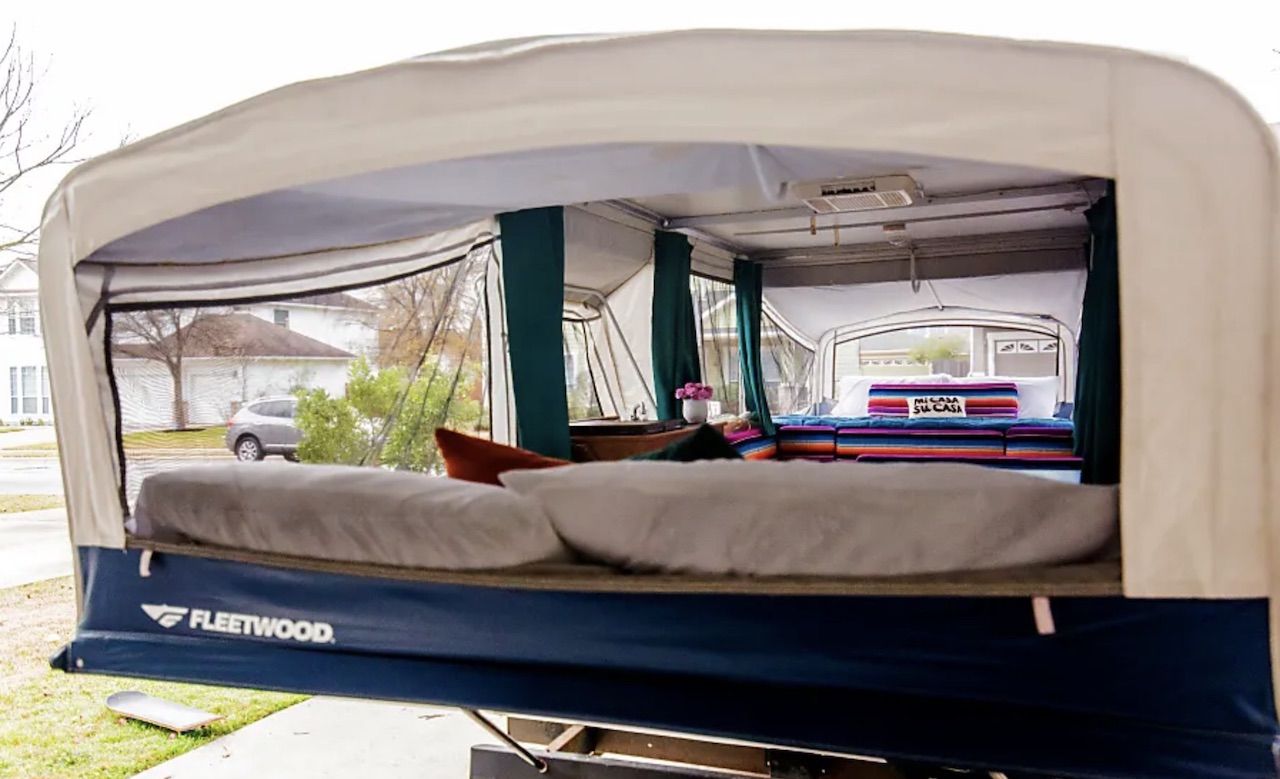 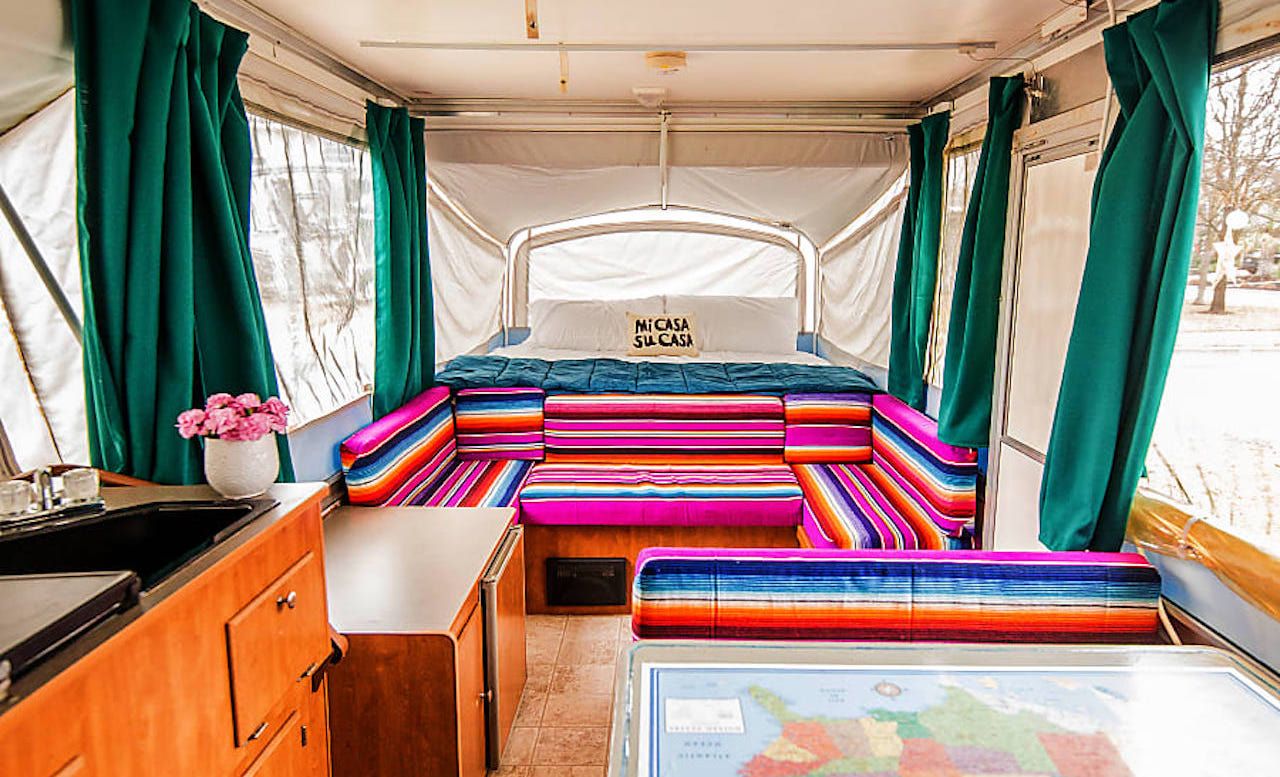 Unicorn pool floaties are adorable. But if you wanna out-rainbow your bestie’s bachelorette party consider this popup in Austin, where the whole interior is done up in Roy G. Biv’s personal motif. With two king beds and a convertible dinette area, it makes for a cozy home base for an epic Austin weekend, complete with propane-powered stove and a refrigerator. The 16-foot Fleetwood pop-up trailer allegedly sleeps six, but that’ll depend on how much personal space you need. Still, the crammed-in-a-sea-of-rainbows Instagram pics will be epic. 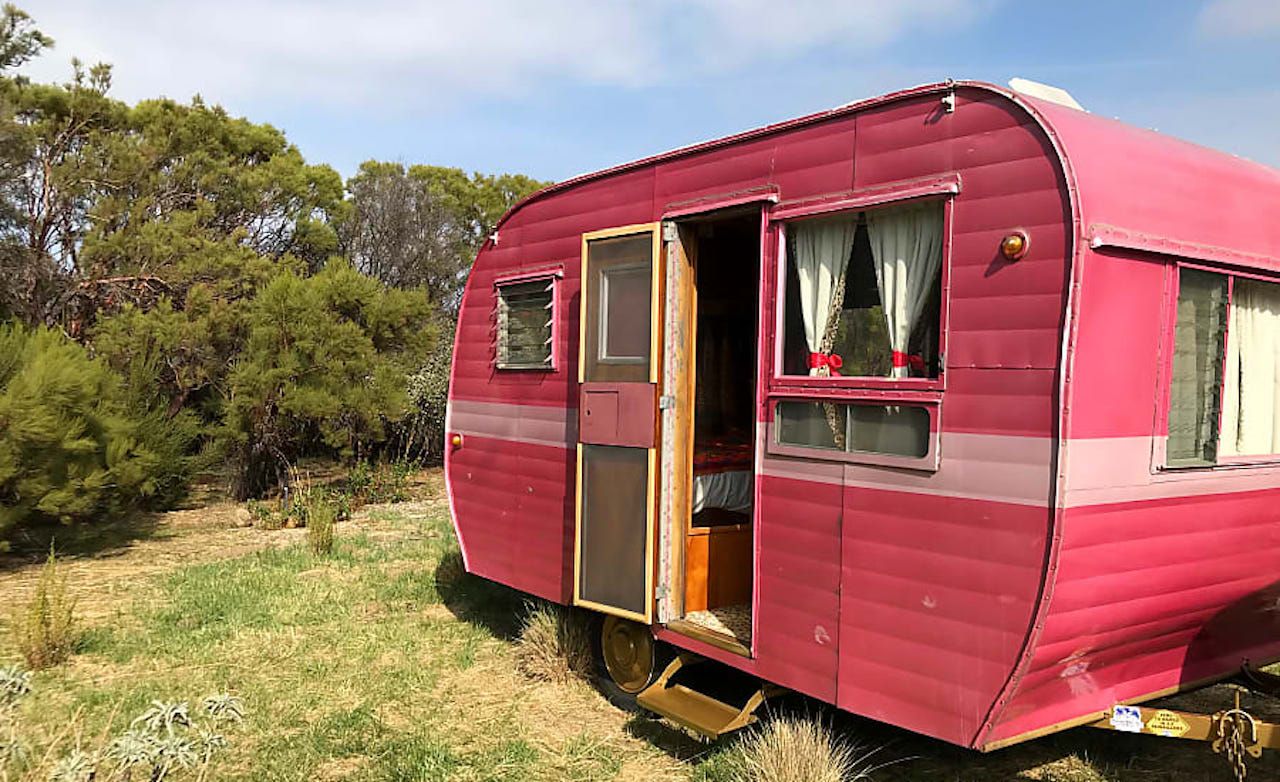 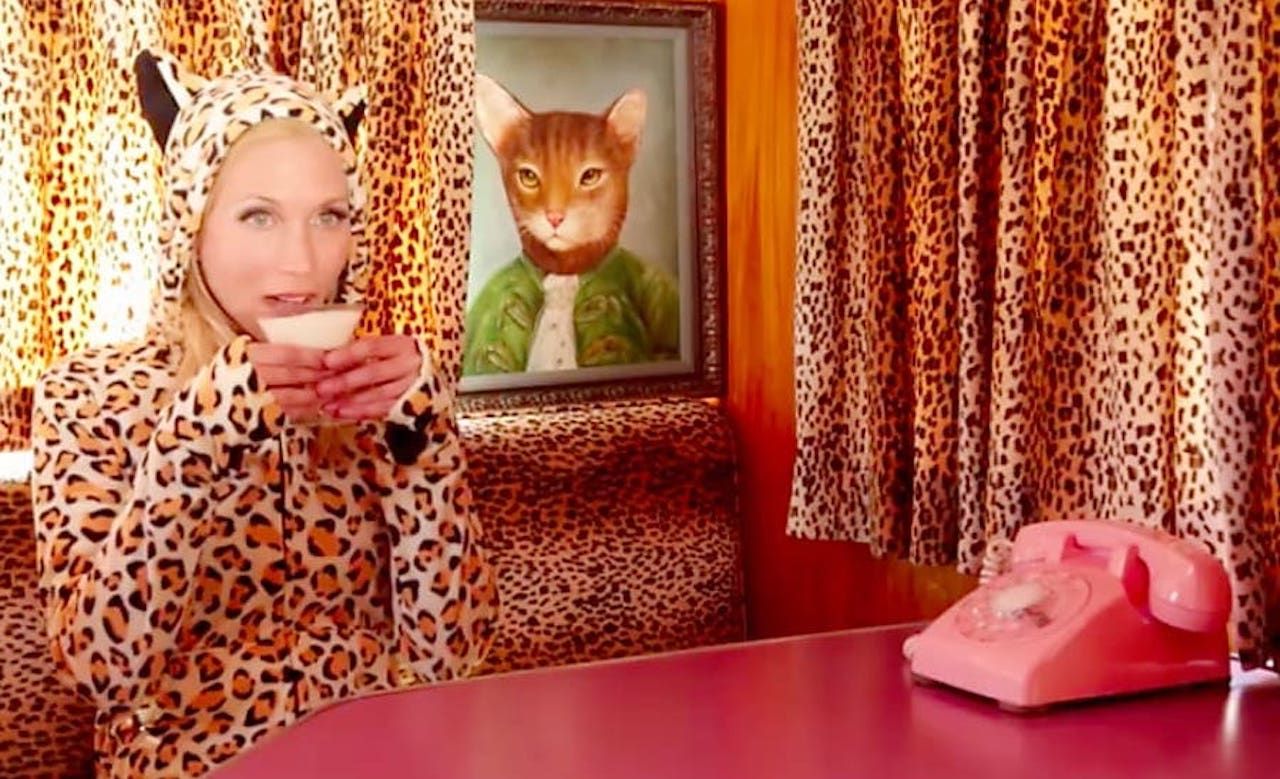 We all have that friend who’s best described as “leopard print wrapped in glitter.” Well, in this case, that friend is a 1956 Pleasurecraft, literally covered in pink glitter on the outside and done up in almost all leopard on the inside. The Santa Monica mountains-based trailer is used more often for photoshoots than it is for any actual camping. But if you’d like to take this stripper’s-locker-on-wheels out to the field, the owner will happily tow it to Malibu Creek State Park for a mere $1 a mile. There’s no bathroom inside, which isn’t an issue if you’re using it as a set, but might be if you want to sleep here. It does have electrical hookups and a fully operative kitchen, though. So if living in leopard gets you a little ravenous, you won’t have far to go. 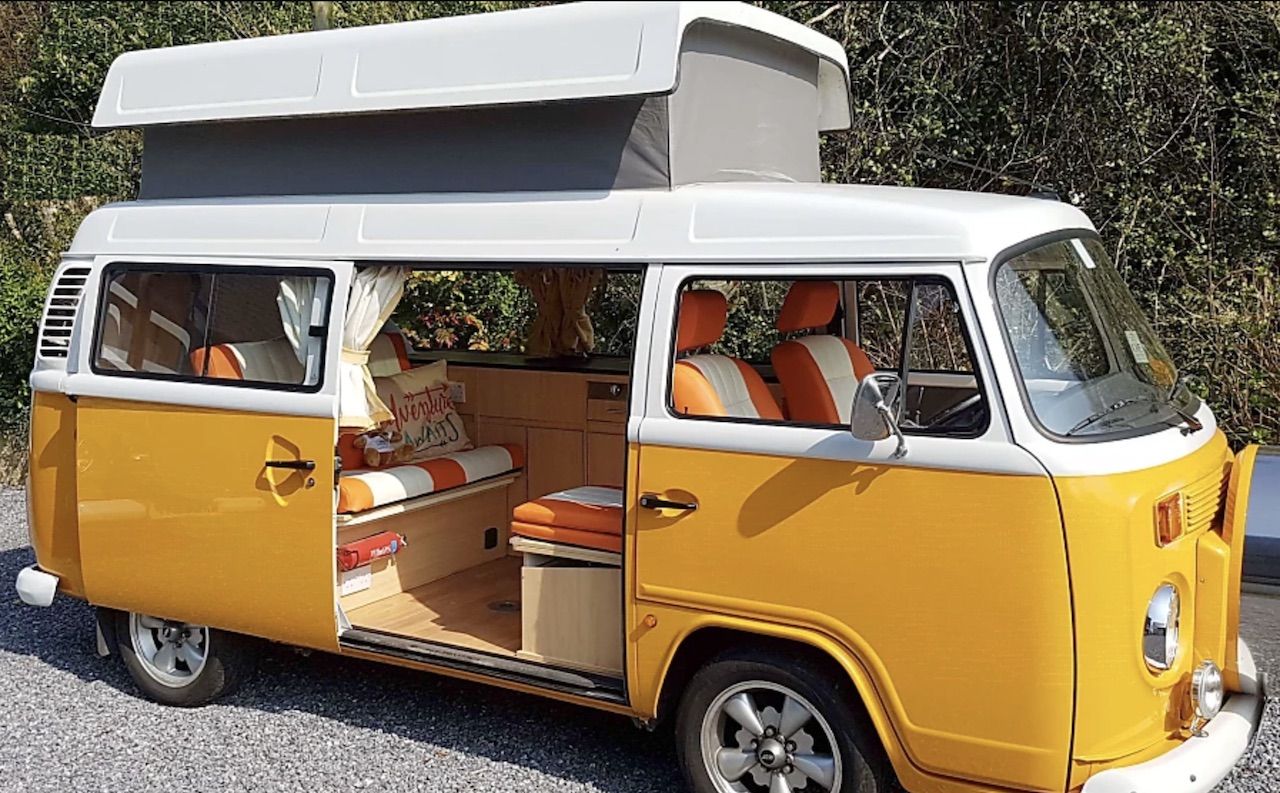 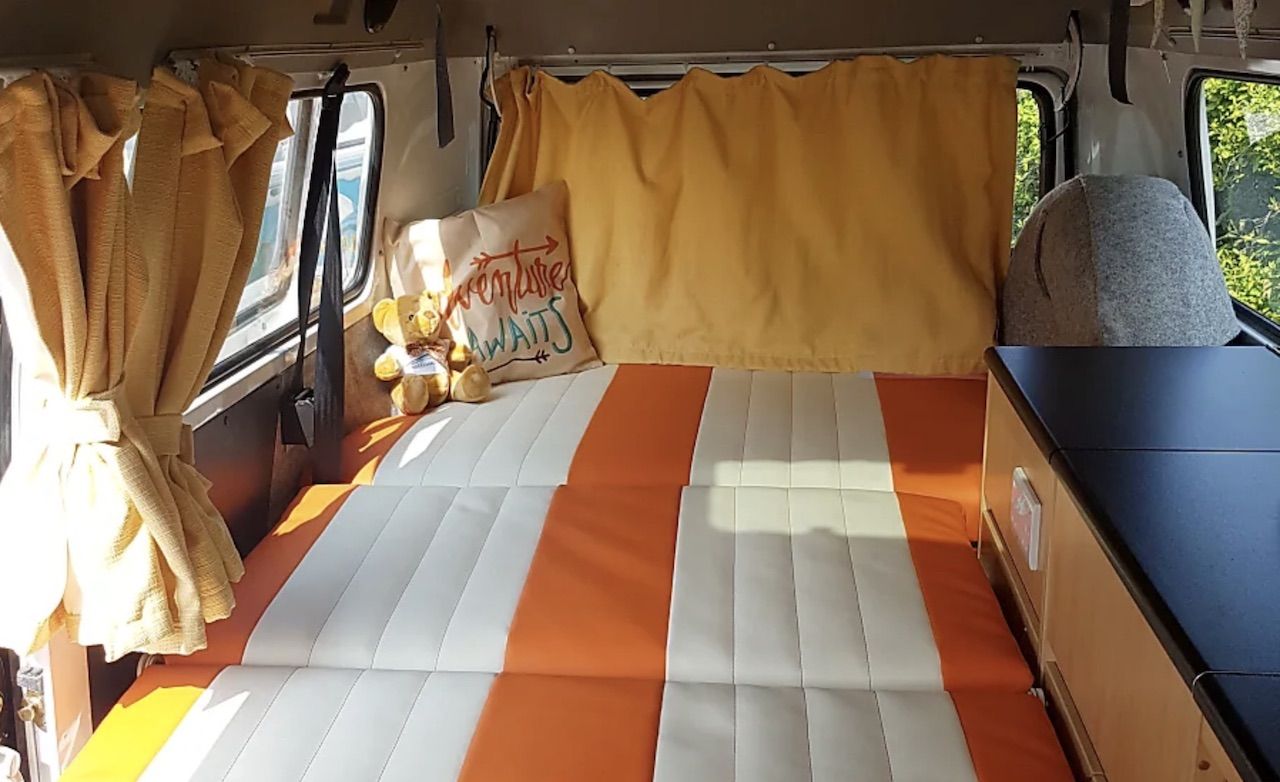 Rolling a bright orange VW bus through, say, Florida, wouldn’t turn too many heads. But this sunburst of camperdom rolling through the grey-skied UK? That’s like mid-’70s Rachel Hunter sashaying through the streets of Moscow. Though Clementine, as she’s named, was only born in 2011, she looks mature for her age, more reminiscent of a fully-restored ‘60s van than something made this decade. It’s got a pop-up roof for extra luggage storage, and the beach-house-inspired interior comes with a gas stove and grill. So you can barbecue outback like you’ve brought a little piece of California summer to the English coastline. 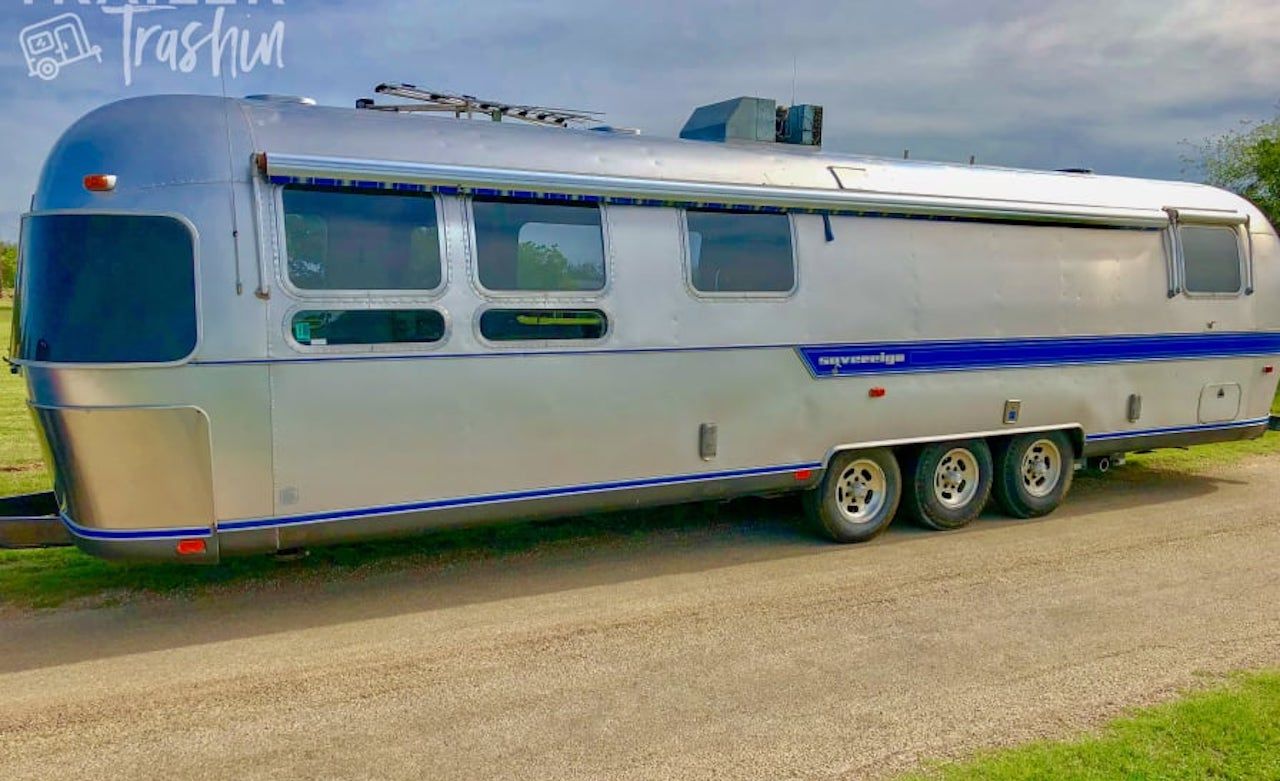 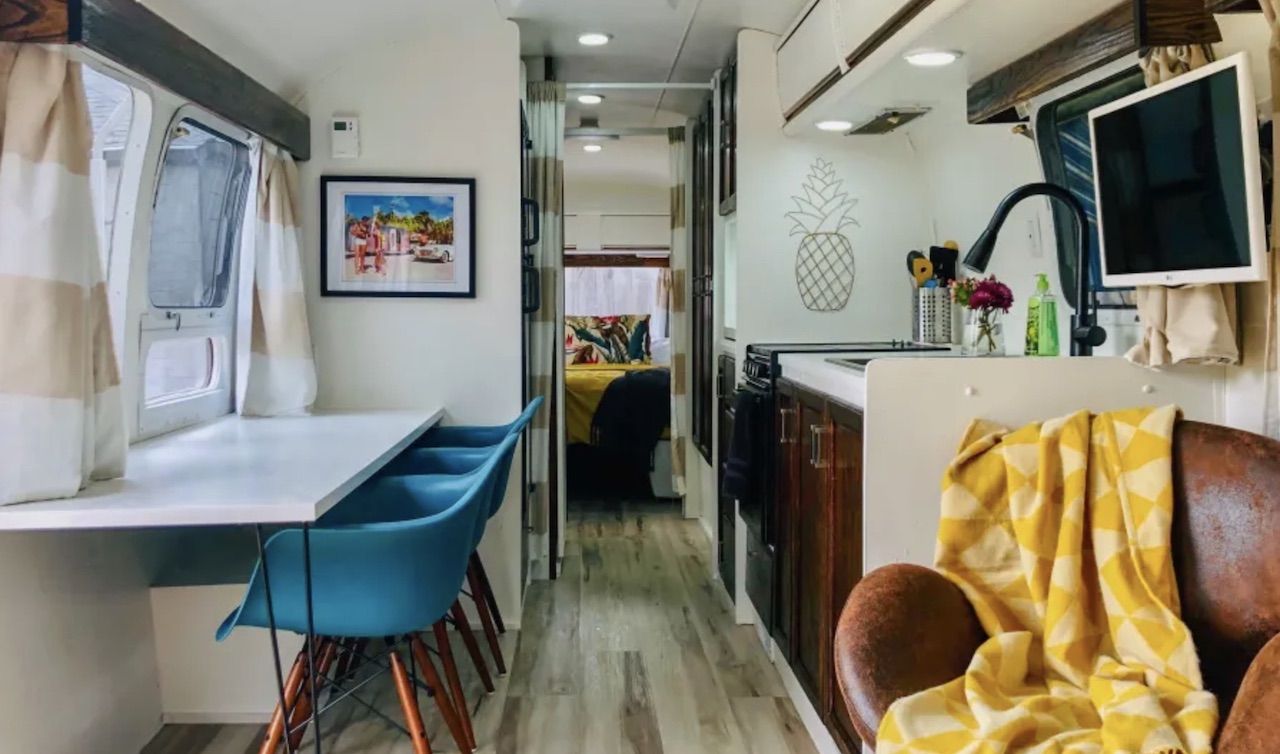 If hipsters all of a sudden got super into NASCAR, this would become the hottest trailer on the market. The 34-foot 1985 Airstream Sovereign has been fully restored by the enterprising owners, offering the kind of luxe interiors you typically only find on the infield at Daytona. It’s got a king-sized bed, a futon, two TVs, and a full gourmet kitchen. Plus indoor showers and AC so you can stay cool and clean while you’re glamping. No pets or small children are allowed in here either, so the inside looks as pristine as it was the day it was featured on Apartment Therapy. Though no telling what a trip to Bristol might do to that. 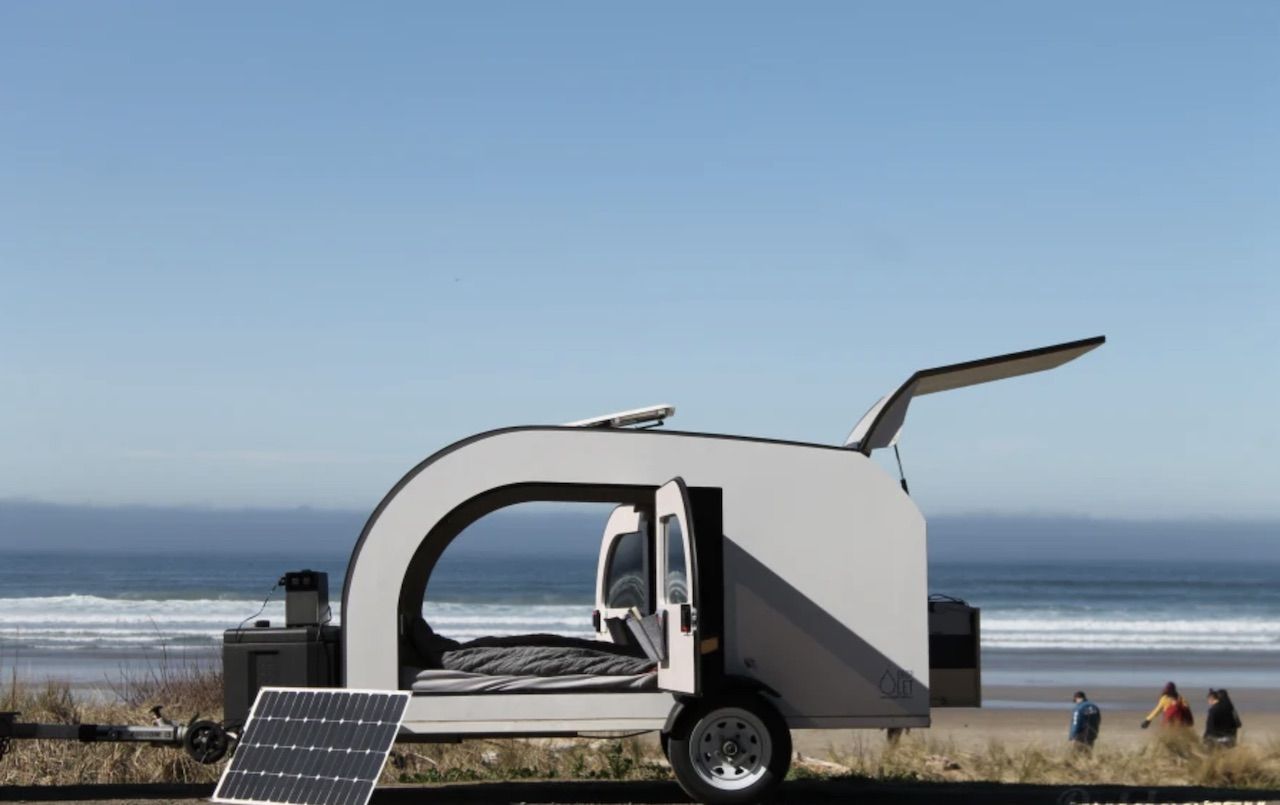 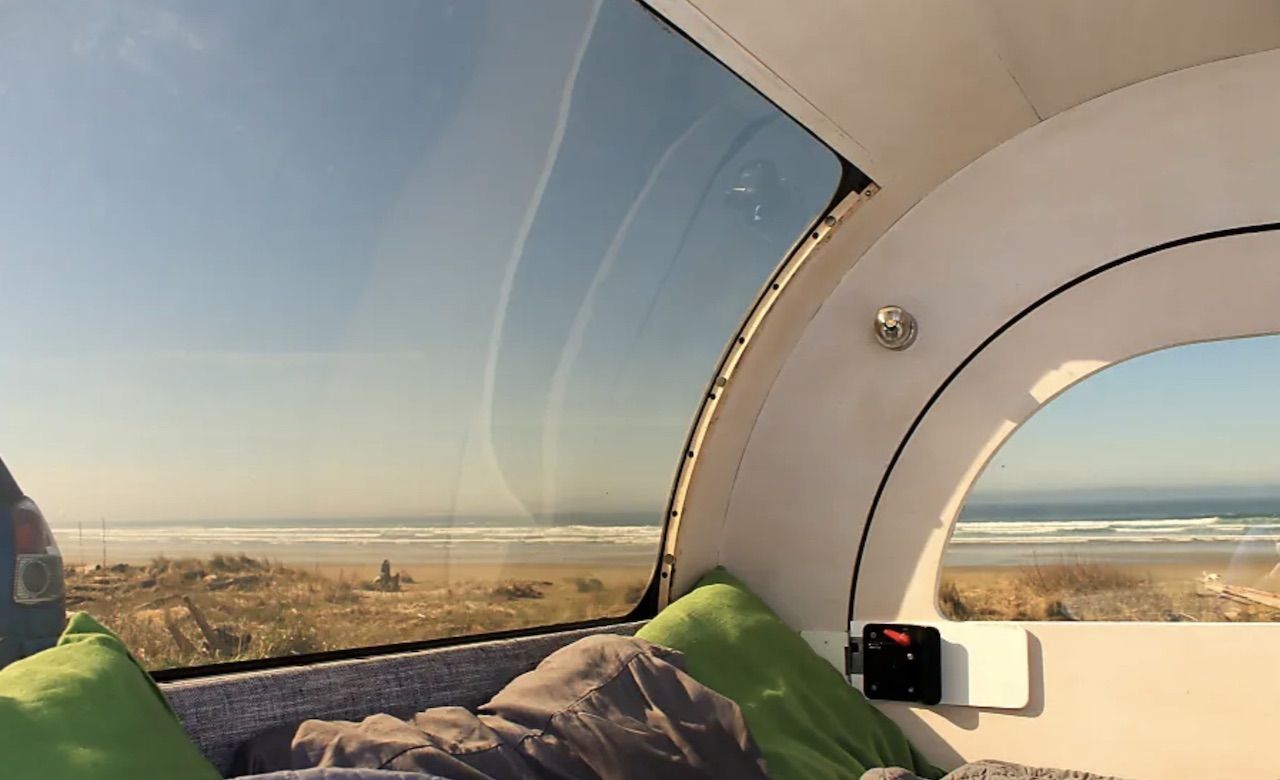 If the natural paradise of British Columbia is calling you this summer, you’ll immerse yourself best in it with this 13-foot droplet origin. Though it might look spartan, it’s actually equipped with a thermoelectric cooler, LED lights, a stove, and a kitchen sink. The trailer also has big, wide doors and windows that let you feel completely outdoors while you’re still “inside.” The queen bed is especially comfortable, though you’ll need to find other places to use bathroom facilities. Just look at it as an excuse to explore more of the most beautiful places in North America.

Travel10 Ways RVing Is a Perfect Fit for Your Travel Style
Tagged
Camping Road Trips Trip Planning
What did you think of this story?
Meh
Good
Awesome