Disney Princesses have come a long way since the franchise’s debut film, the 1937 Snow White and the Seven Dwarves. Today, Disney princesses range from actual princesses to badass ladies who have mastered archery and adventure across the sea into the unknown. Each princess has her own unique background, lifestyle, and passion, but we’re sure that if they could jump out of the screen, they’d all eagerly strap on a pack to explore the world. So rather than offering up the obvious (“Oh you like Mulan? You should go to China.”), we’ve instead imagined where these princesses would go based on their own interests and personalities. Here’s where we think they would go and where you should head too, according to your favorite Disney Princess.

For fans of Snow White: Uganda 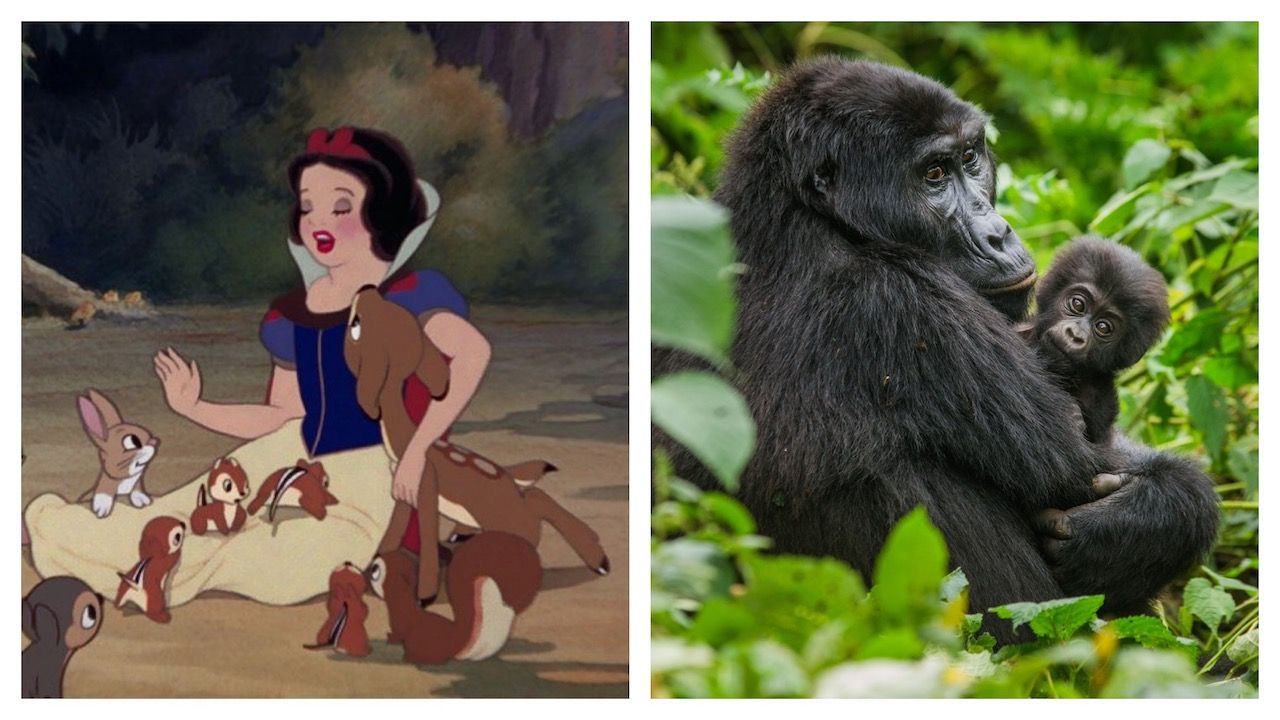 Snow White loves her seven dwarves, but she also loves her animals. You can interact with animals anywhere, but not all of those are ethical experiences that cause no harm or disruption to the animals’ lives. A perfect place to conscientiously view majestic creatures in their natural habitats is Uganda, a landlocked country in Africa. Bwindi National Park is renowned for its gorilla trekking; permits for this can cost a pretty penny, but it’s well worth the expense — your guide will take you closer than you ever thought you’d get to a silverback and his family, and nothing can compare to the sight of seeing them happily living their lives up close and personal.

Trekking through the national park will also provide opportunities to spot hundreds of different birds and butterflies, as well as other primates. Visitors can also go on a safari to see the big five, i.e. elephants, leopards, lions, rhinoceroses, and buffalo. While a safari will likely not get you as close to the animals as gorilla trekking, it’s still a wonderful and worthwhile experience for fans of the first official Disney Princess. 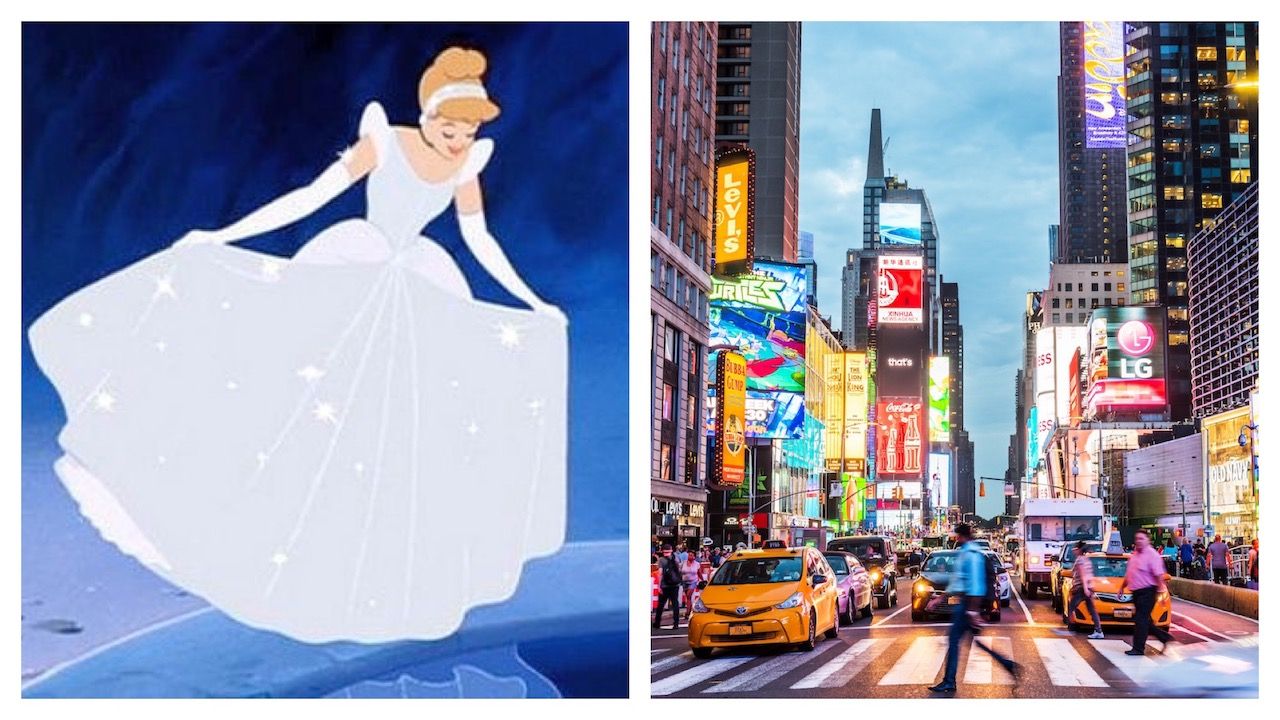 Everyone knows Cinderella loves a good party, and she can go from an elegant ball to getting her hands dirty, and vice versa. New York City has a widely varied nightlife, from speakeasies and rooftop bars to dive bars and live music venues, which attracts people from all walks of life. Whatever kind of mood you’re in, whether you want to dress up to the nines and sport glass slippers or just throw on jeans and a t-shirt, there’ll be dozens of places all over NYC that’ll suit your needs. But unlike Cinderella’s first time at a ball, you won’t have to leave at the stroke of midnight lest your carriage turn back into a pumpkin.

For fans of Aurora: Kyoto, Japan 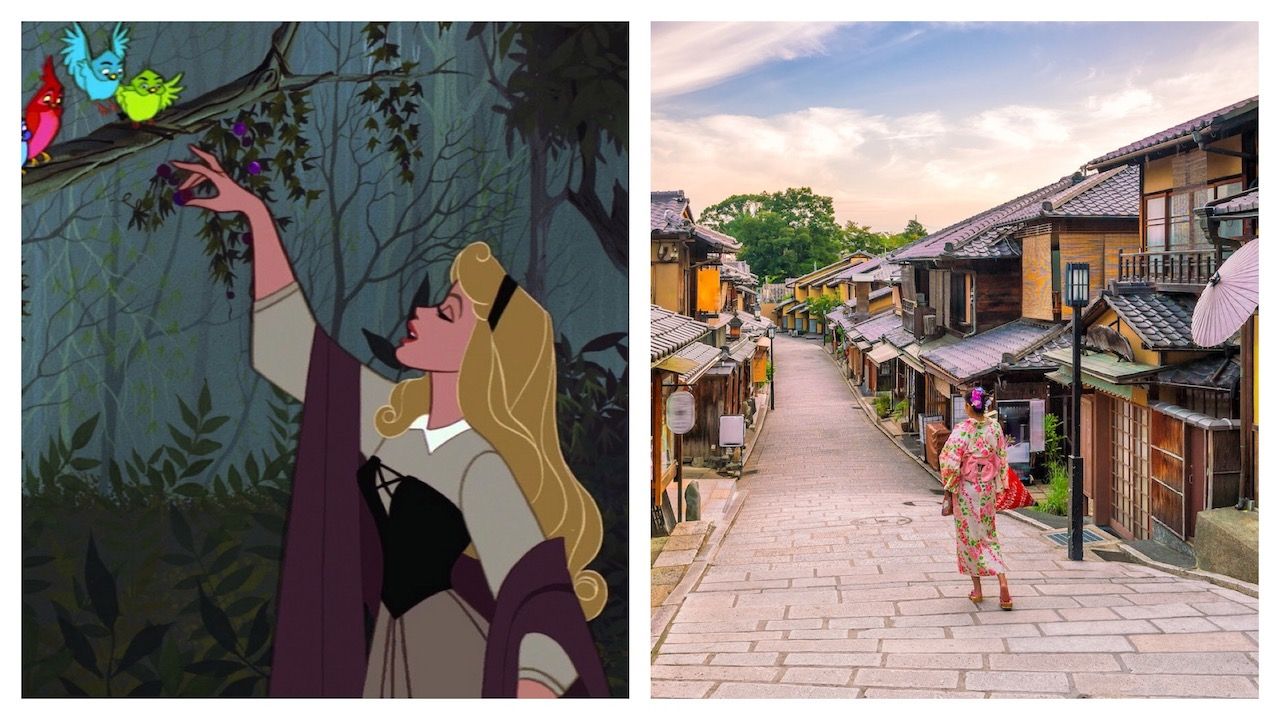 Hopeless romantic that she is, Aurora would love Japan, and those who favor the sleeping beauty will too. With hot springs, dramatic scenery, and delicious food, the archipelago is dreamy. Kyoto, where traditional, old-world Japan mixes with modernity, is perfect for a soul like Aurora to wander through. The city gives off an aura of serenity, and you’ll feel nothing but a calm wonder while walking through its streets, drinking at teahouses, or relaxing at onsens. Visiting temples like Fushimi Inari, nature spots like Arashiyama Bamboo Grove, and warmly lantern-lit areas like Gion will enrapture visitors — but any enchantment here will be the good kind, no cursing business going on in this neck of the woods. Save the sleeping for a ryokan, a traditional Japanese inn that’ll provide you with all the solitude and comfort you need after a day of exploration.

For fans of Ariel: Greece 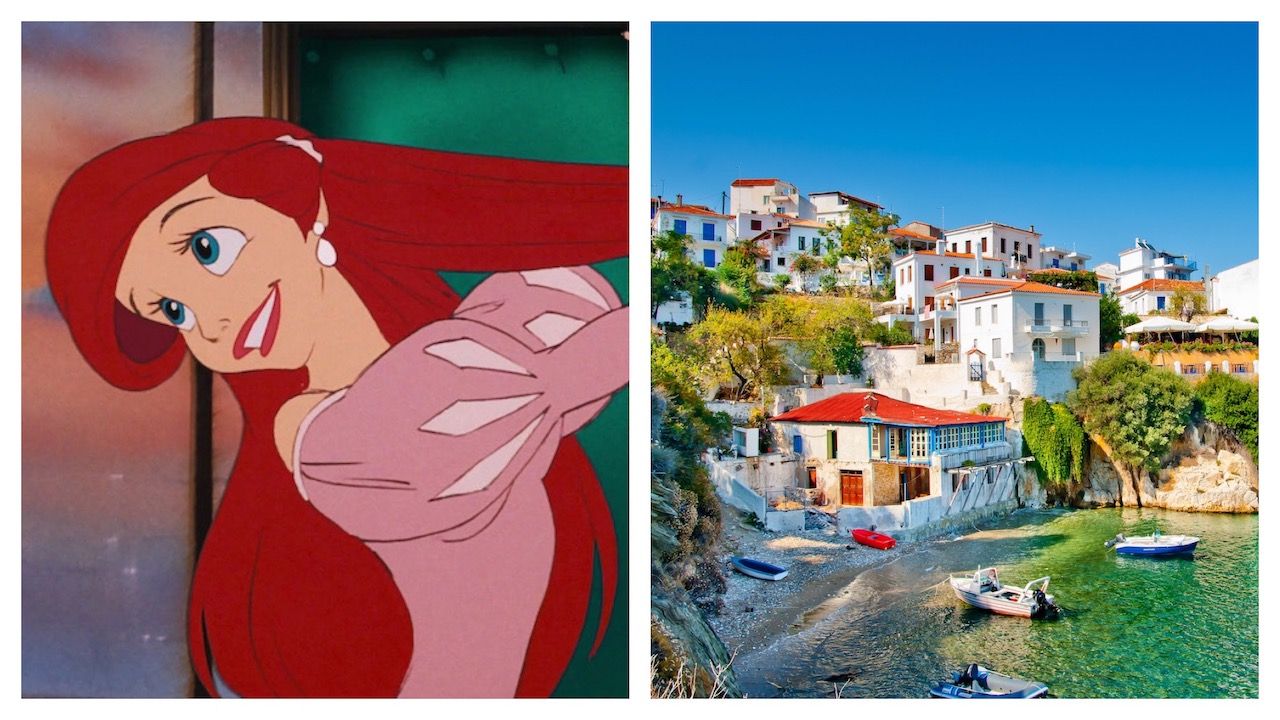 Ariel is both a creature of the sea and lover of human culture, and Greece is where fans of the little mermaid can tie the two together. Exploring historic sites lends itself as a window into history where you’ll learn about the start of Western civilization, as well as mythology. Greece is also known for its beaches and islands, where you can swim and snorkel in the blue waters with some colorful aquatic creatures. Most famous of these islands are Santorini and Mykonos, but if you want to combine history with swimming, we recommend using Athens as your homebase, where historic sites are within the city and visiting one of the lesser-known, but equally amazing, islands as a day trip is unforgettable. 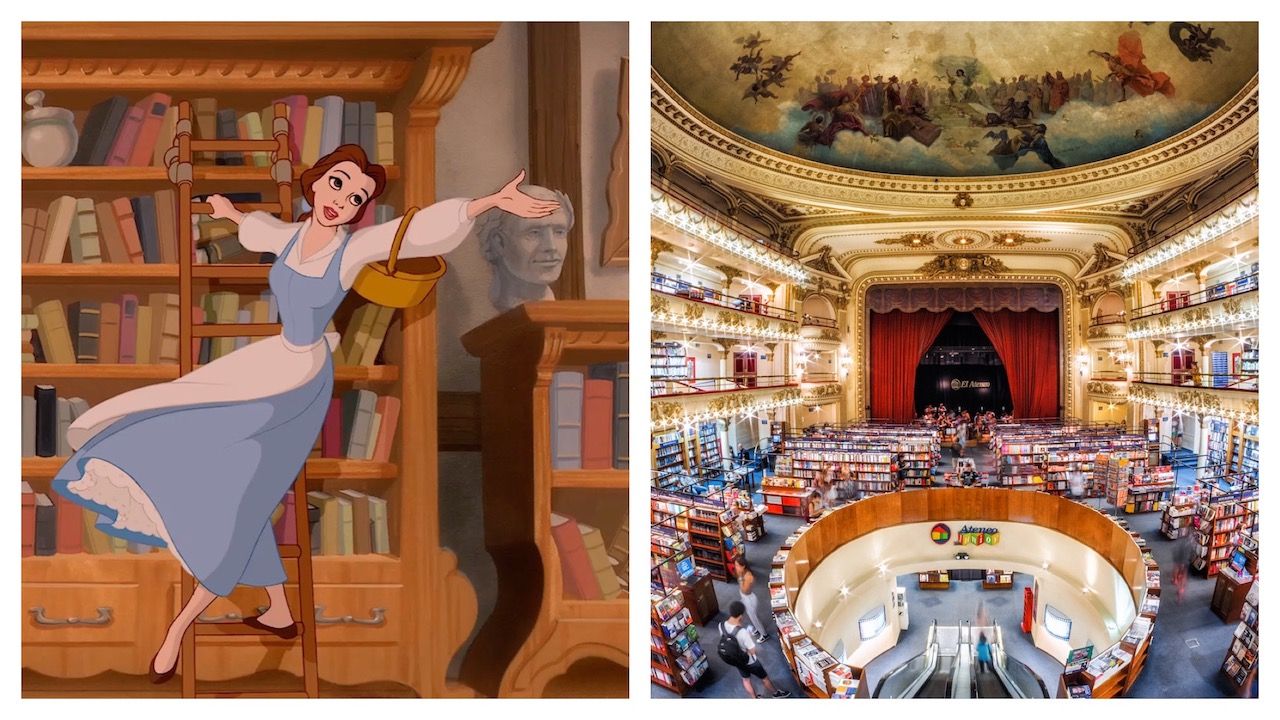 Always eager to learn, Belle is a bookworm at her core, so she’d feel right at home in a city with approximately 25 bookstores for every 100,000 residents. One of the most beautiful and largest bookstores in Buenos Aires is the magnificent El Ateneo Grand Splendid, which used to be a theater back in the day and has kept most of its original architecture (think ceiling frescoes, red stage curtains, and audience boxes). There’s even an annual book fair that spans 20 days, with thousands of events including readings and workshops. The city is teeming with culture; there’s the Latin American art museum with works by famous artists like Frida Khalo, Teatro Colón for opera performances, and many palaces with stunning architecture.

For fans of Jasmine: India 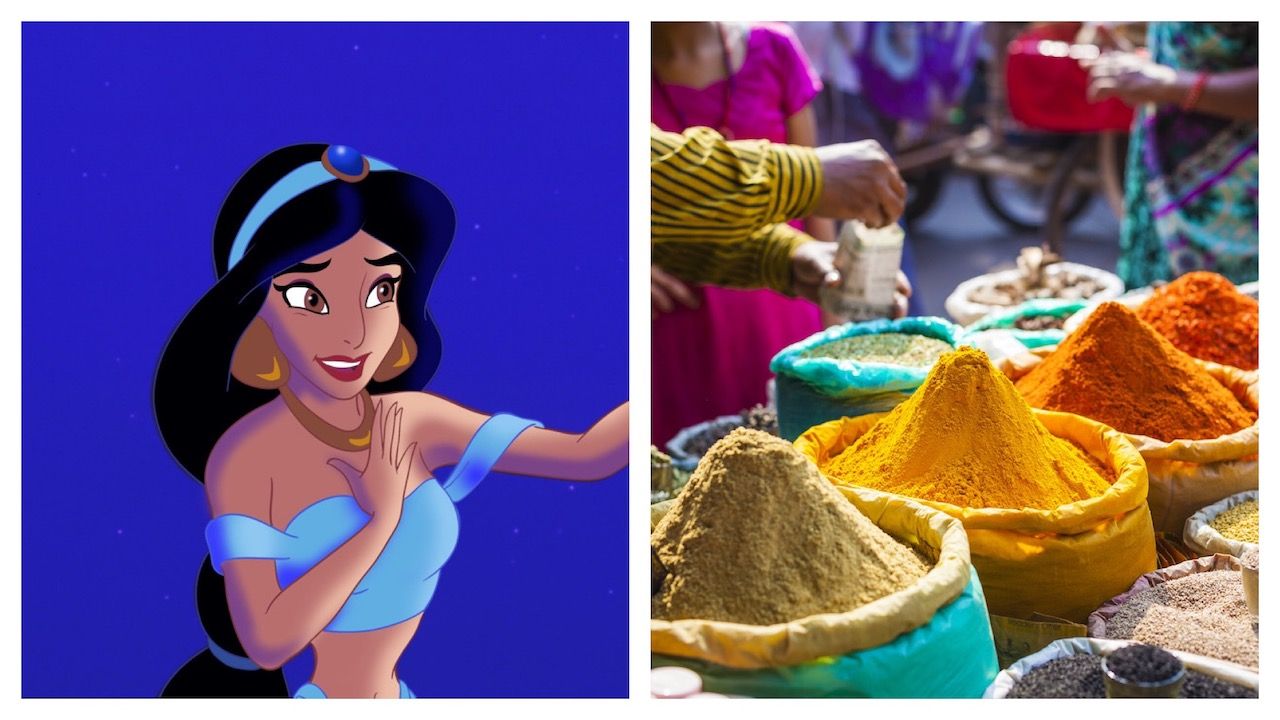 Jasmine wanted to break free of the constructs that restricted her view of the world, so a vast and diverse place like India is perfect for such a person. Since she’s royalty, checking out the various palaces would be in the spirit of the princess; there’s the Mysore Palace in the state of Karnataka and Ujjayanta in Tripura. In Jaipur alone, a newly listed UNESCO World Heritage site known as the Pink City, there are a handful of gorgeous palaces worth visiting, such as the Hawa Majahl and City Palace. Jasmine also longed to mingle with locals and enjoy the anonymity of a crowd. Well, it doesn’t get more crowded than India, which has some of the best street markets in the world. The cities of New Delhi, Mumbai, and Jaipur have some of the most well-known markets in the country, where visitors can easily lose themselves among all the hustle and bustle.

For fans of Pocahontas: Peru 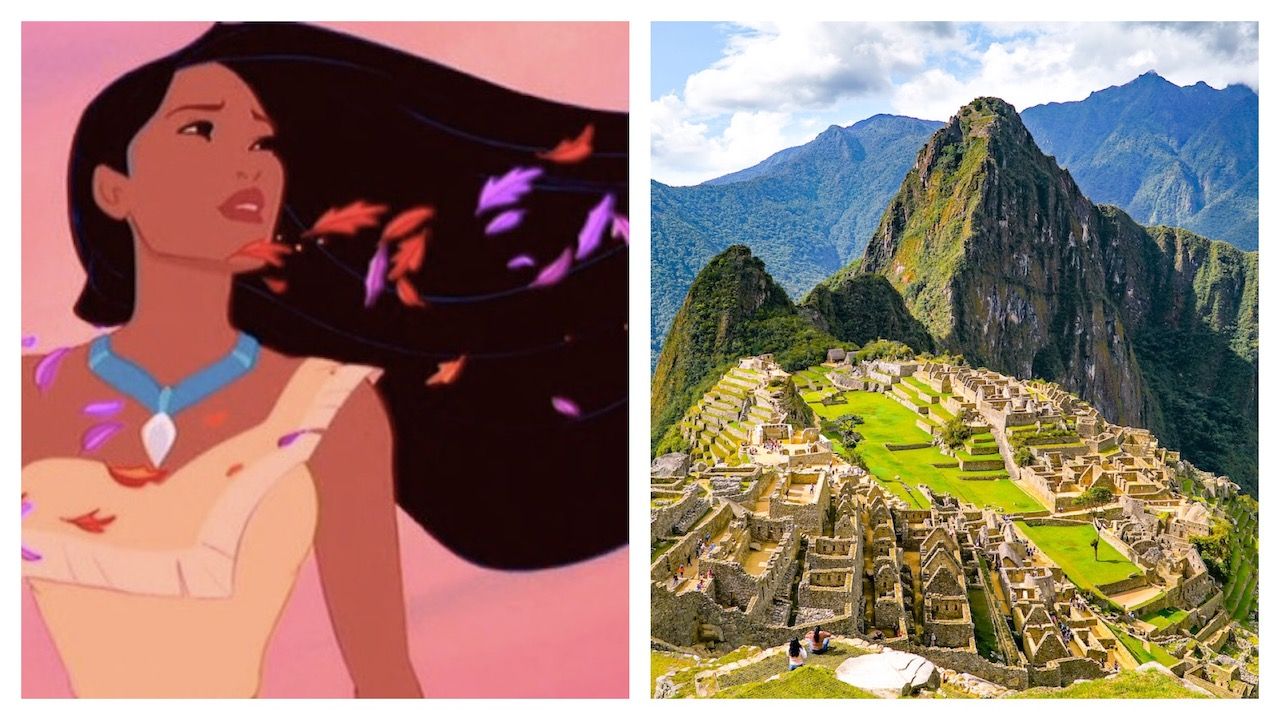 Pocahontas’ love of the wilderness is intrinsic to who she is, so her fans are going to want to visit a place where they can get in touch with nature. For this, visit Peru. The South American nation has a diverse set of landscapes, including rainforests, jungles, deserts, mountains, and volcanoes, and as a result, it has a rich biodiversity. Free spirits like Pocahontas will have no qualms about trekking through the Amazon Rainforest, the Andes, the Atacama Desert, and even the Inca Trail to Machu Picchu.

For fans of Mulan: Chile 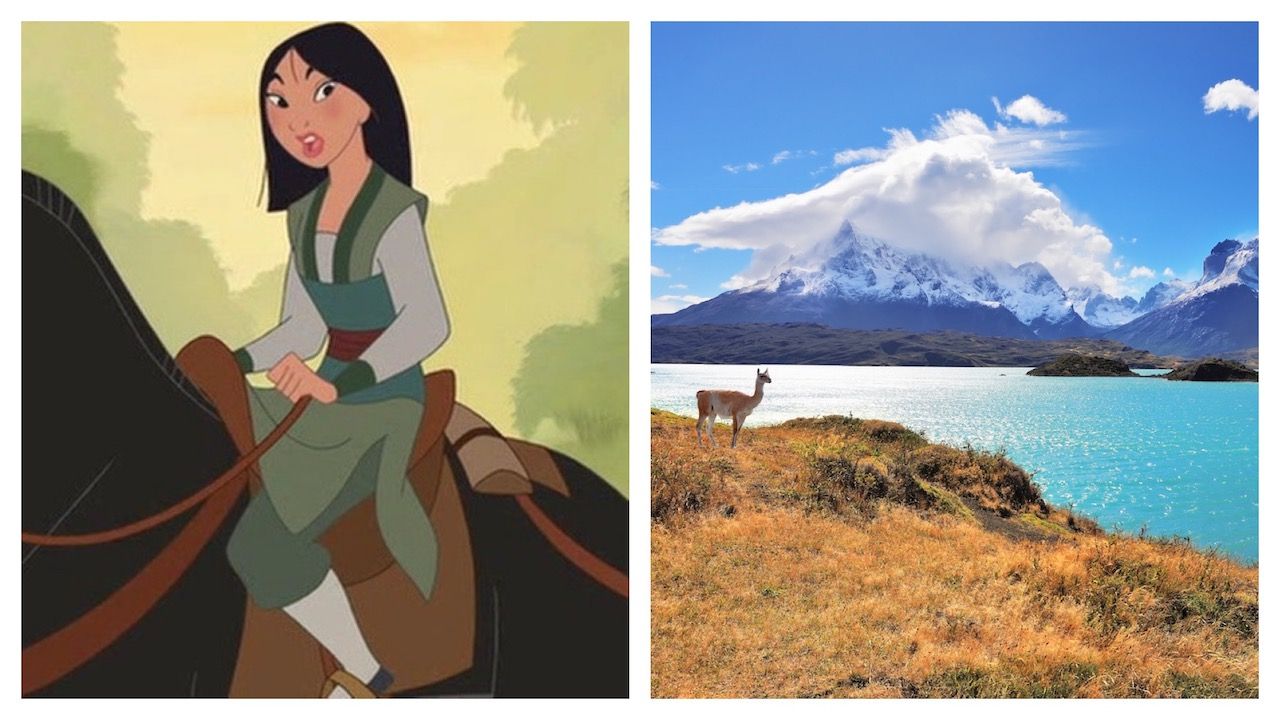 Mulan has strong physical abilities, so she would love a place where she could put those skills and muscles to good use. Chile, with its ride range of terrain that offers great hiking, is perfect for fans of this independent, no-nonsense princess. There’s the well-known Patagonia region, Cajón del Maipo, San Pedro de Atacama, and all the national parks. The best part is that you don’t even have to be as physically inclined as Mulan; there are several trails that offer just as amazing views at a lesser difficulty. As Mulan is pretty skilled on horseback too, she’d be glad to know Chile offers some of the best horseback riding in South America.

For fans of Tiana: Italy 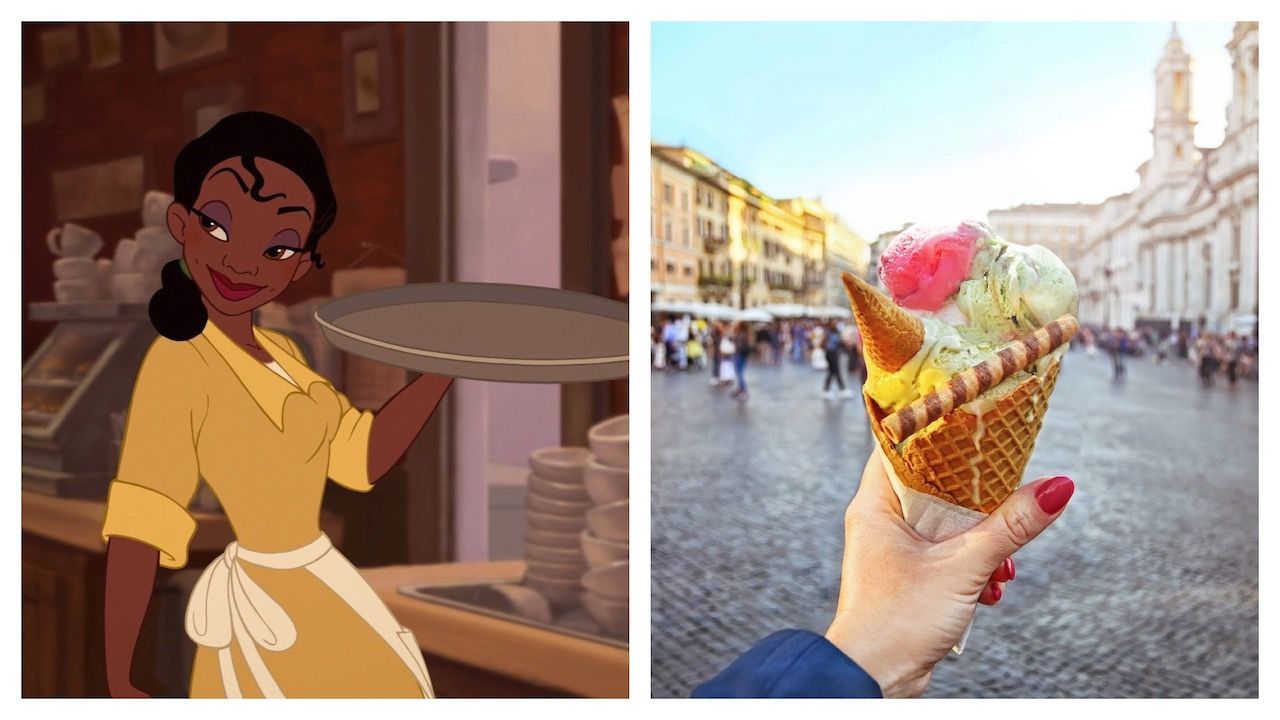 Before becoming a princess, Tiana was a cook in New Orleans who hoped to one day open her own restaurant — a goal she, of course, achieved. So, to put it simply, Tiana is a foodie through and through. There’s good food all over the world, but one country that shines bright in the culinary scene is Italy. Italy does pasta and pizza like no one else, but it’s also the place for a succulent dessert. Each region has its own specialties and preferences, but it’ll be delicious food no matter what, so you can’t go wrong. If you want to dive right in, try one of the country’s many food festivals. Tiana definitely wouldn’t be able to not get in the kitchen, though, and you shouldn’t either. Be sure to sign up for a cooking class to learn from the local masters of Italian cuisine.

For fans of Rapunzel: Australia 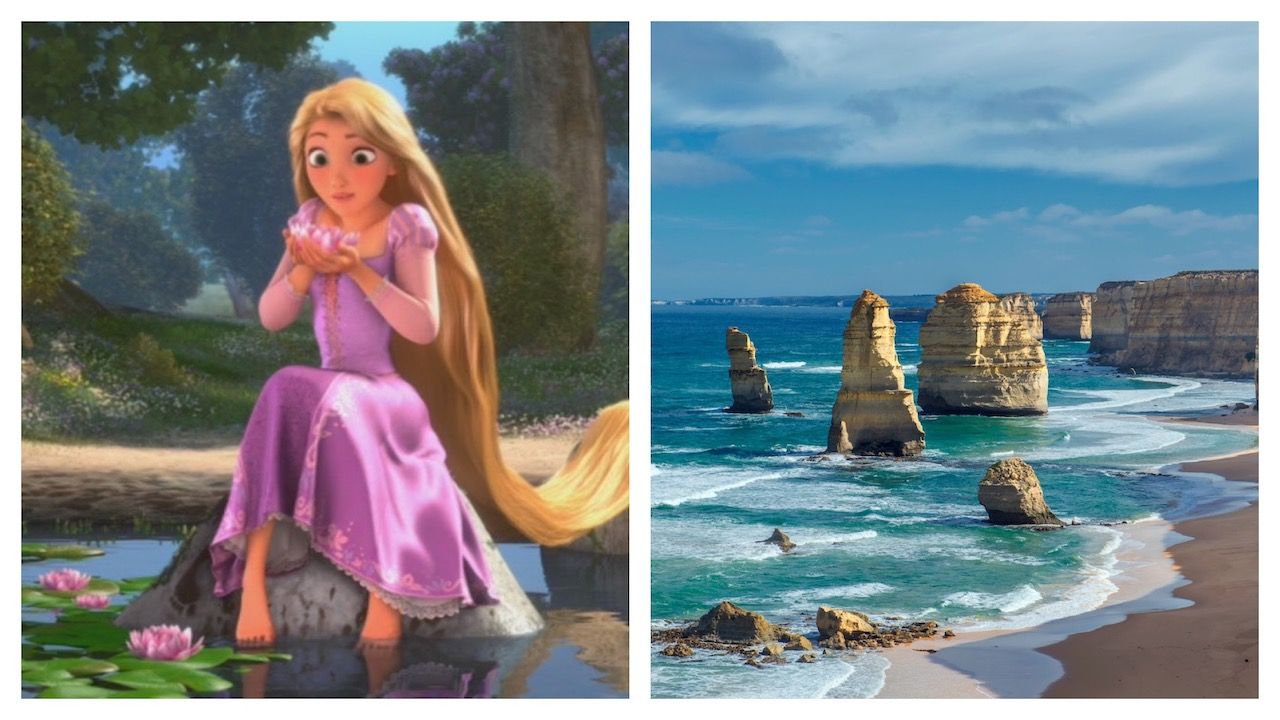 Rapunzel wondered what life was like outside of the walls behind which she was held, and she dreamed of one day being able to explore the world beyond them. A vast country where you could spend an indefinite amount of time exploring and still not even scratch the surface of all it has to offer, Australia is perfect for those who think like Rapunzel. There’s Uluru, a sacred rock formation in the heart of the Australian Outback; the Great Barrier Reef, the world’s largest coastal reef with over 900 islands and thousands of species of oceanic life; Wave Rock, a natural rock formation in Western Australian that’s shaped like an ocean wave; and Kings Canyon, similar to the Grand Canyon but with a large amount of trees and opportunities to swim in sinkholes.

For fans of Merida: New Zealand 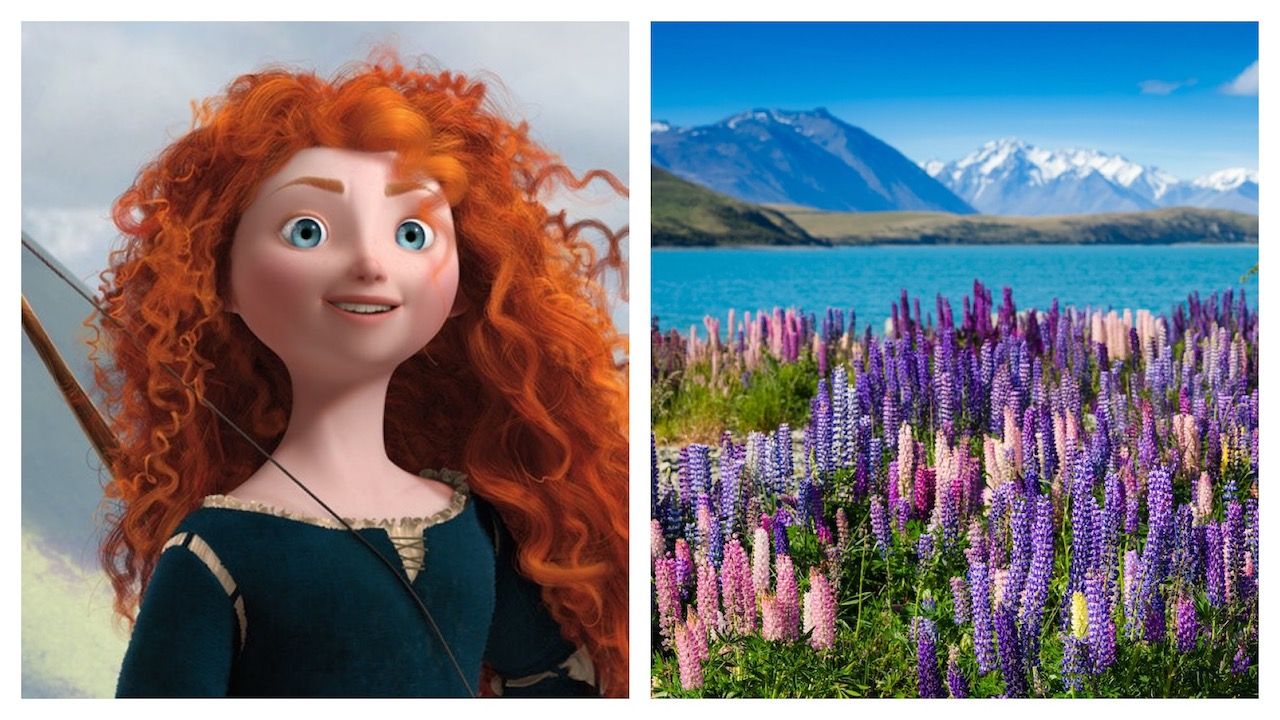 Fans of Merida are going to want to head somewhere they can get into the adventurous spirit. With a beautiful natural landscape that has been the backdrop for many a film and television series, New Zealand has no end to the adrenaline-inducing activities available. It’s the best place in the world to go bungee jumping, with stomach-dropping spots like Kawarau Bridge, a breathtaking,141-foot drop that people can still jump from today. Other death-defying activities include mountain biking, kayaking, whitewater rafting, hiking, skydiving, driving along some of the country’s most dangerous roads, launching yourself as a human catapult, and riding the world’s largest swing. You name it, and it’ll be there, with incredible scenery to inspire that brave and adventurous spirit.

For fans of Elsa: Switzerland 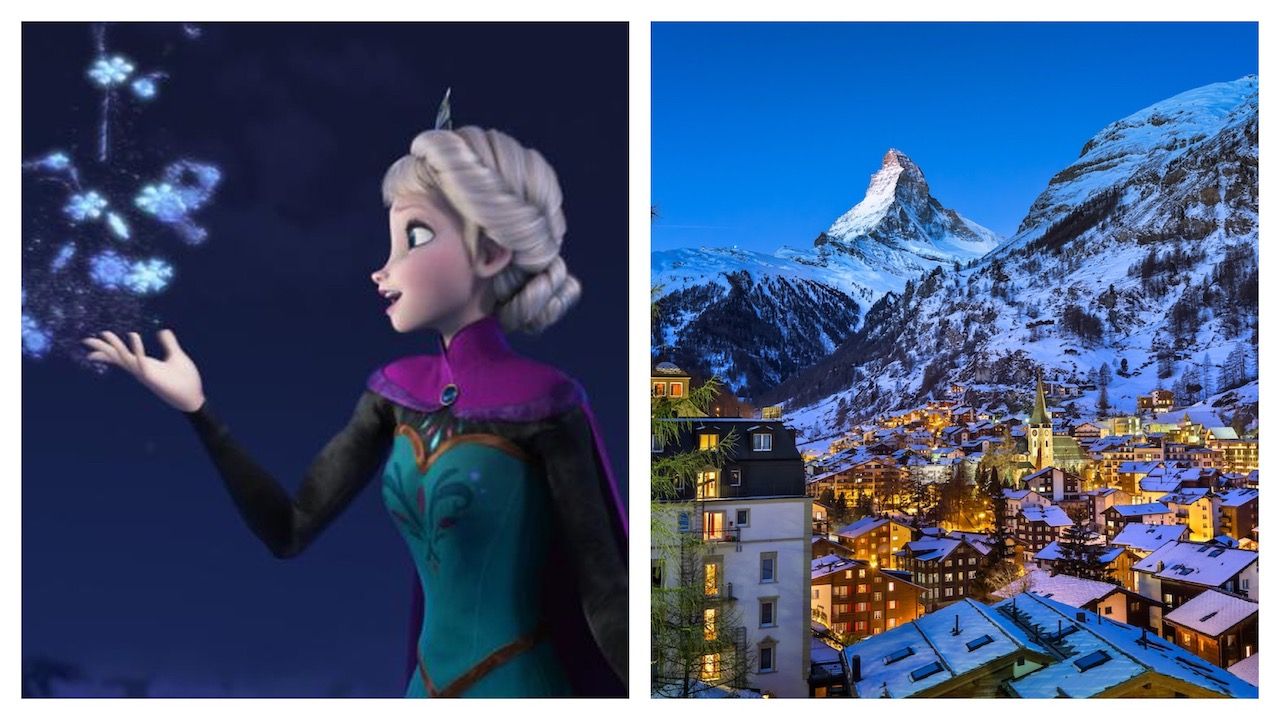 The cold and snow never bothered Elsa, and Switzerland does not lack either. If you do want that white blanket of snow, head up to the Alps; the Jungfraujoch is a great place to start and is a saddle between the Jungfrau and Mönch mountains. There, you’ll find the Top of Europe building, which has several viewing platforms, and the Sphinx Observatory, one of the highest astronomical observatories in the world. It’s also a great place to hole up and enjoy some solitary me-time, as Elsa needed from time to time.

To switch up the landscape color scheme and socialize a bit more, there’s Lauterbrunnen, one of the country’s prettiest villages, located in a stunning mountain valley. If you’re itching for some urban civilization, visit Zurich, where you can also take a quick side trip to the Lindt and Sprüngli chocolate factories — the best treat for a chilly day.

For fans of Moana: Costa Rica 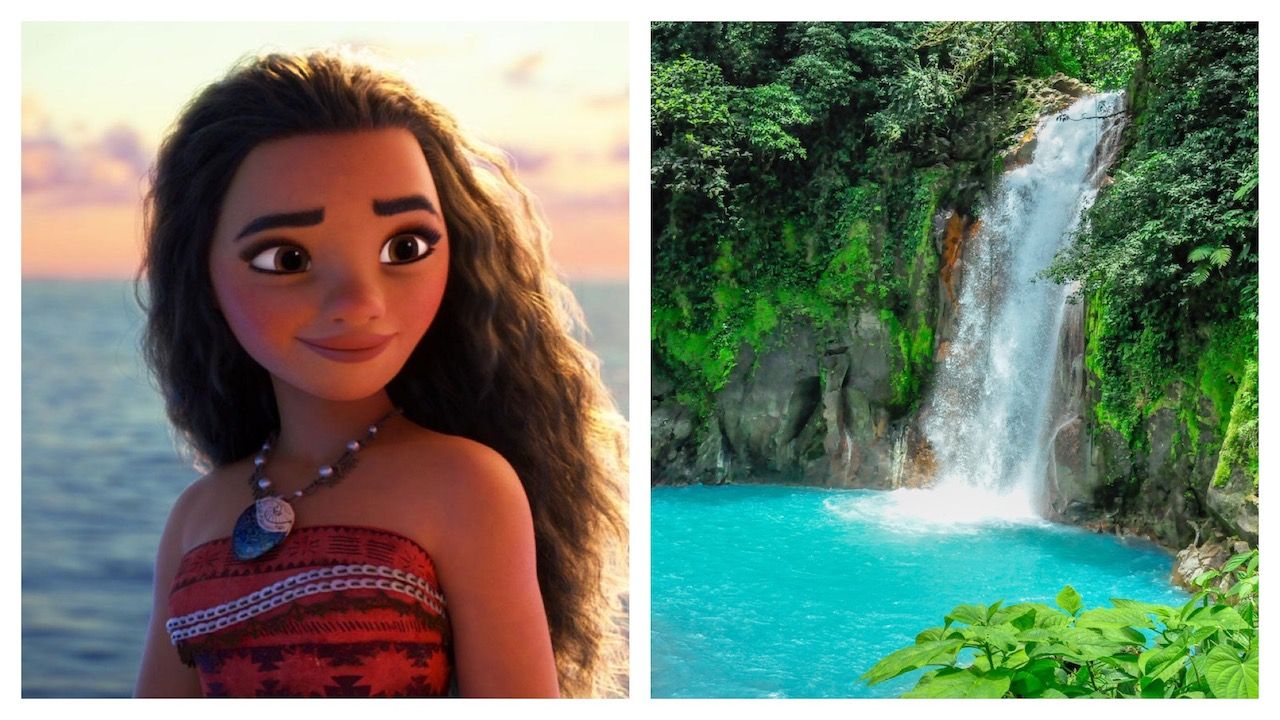 As someone who loves water sports, adventurous activities, nature, and animals, there’s no better place for Moana fans than Costa Rica, which has all that and more. The Central American country is one of the most biodiverse places in the entire world and has an astounding number of national parks where you can see that for yourself. Corcovado National Park, taking up 164 square miles, is home to over 450 species of birds and 140 mammals, including jaguars, macaws, and capuchin monkeys. Costa Rica’s beaches provide ample opportunity to get out into the water: Dominical for surfing, Tamarindo for diving, Arenal for kiteboarding, Pacuare River for whitewater rafting, and Playa Potrero for sailing, among others.

The 8 best movies and shows to watch before going to Paris
The 50 greatest campfire songs of all time
10 horror movie locations you can visit in real life
Why does ‘yellow filter’ keep popping up in American movies?
The 10 commandments of attending a live drag show