Most of us think of cozy beds and warm rooms after a day of playing in the snow. But those who love winter and unconventional lodgings would gladly trade memory foam mattresses and high-thread-count sheets for a night in an ice hotel that looks like Elsa’s frozen palace. Built by snow architects and artists, ice hotels are ephemeral and make for a very cool experience. Here are seven of the craziest ice hotels from around the world where you can spend a frosty night. 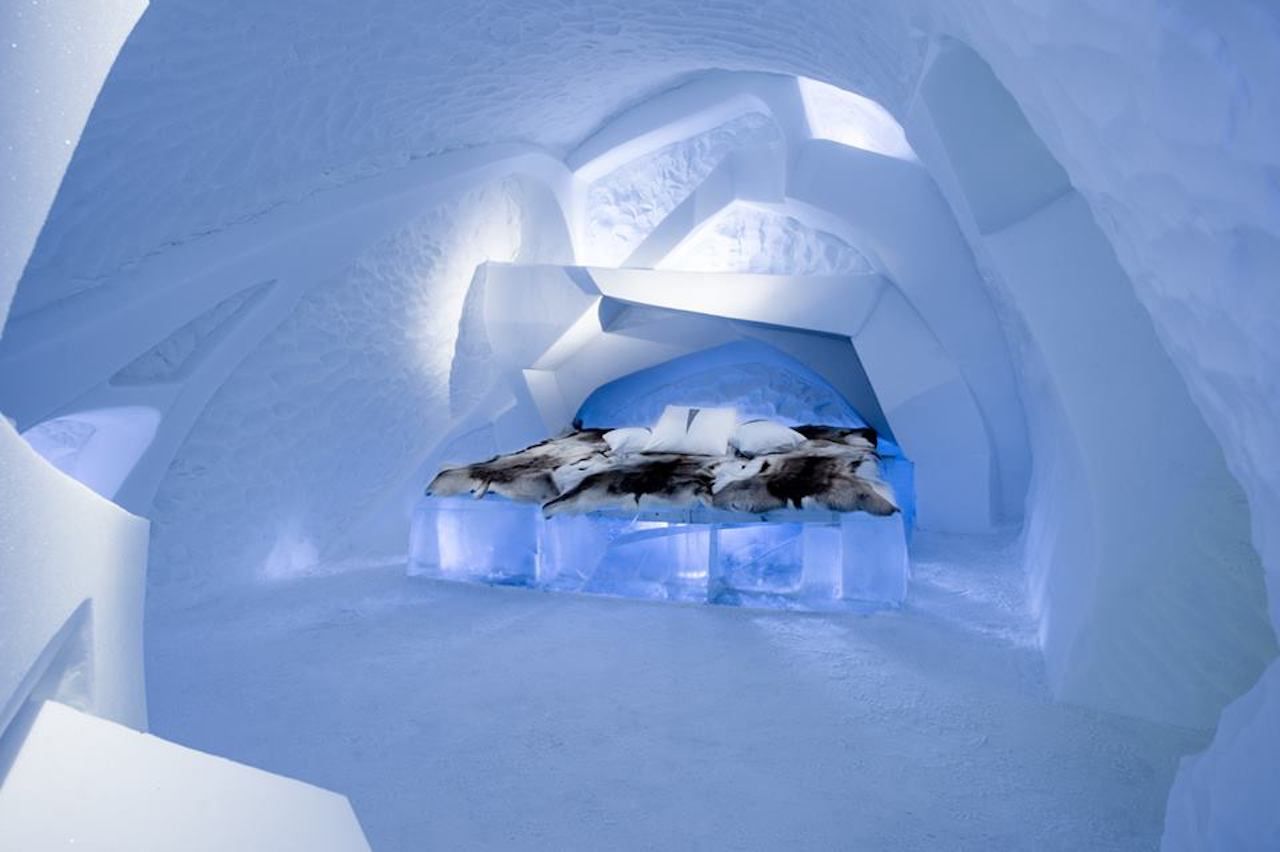 Ice Hotel Jukkasjärvi in Sweden first opened in 1989 and was the first ice hotel ever created. It is made of snow and ice blocks from the nearby Torne River, artfully sculpted by artists to make every room special. Because nobody wants your room and the beautiful carvings it contains to melt, the place has no heating, so it is always around 23 degrees Fahrenheit. To warm up, you can hit the sauna located in another building and take advantage of the trip to use the bathroom — the rooms don’t have plumbing either.

The hotel has enough rooms for about 100 guests, a reception area, a restaurant, a bar, a church, and an ice-sculpting studio. While most of the rooms are only available from December to April, some can be booked year-round in the ICEHOTEL 365 section, thanks to solar panels that cool the rooms 24/7. Getting to Ice Hotel JukkajÄrvi is as much fun as staying there — you’ll need to ride a dog sled or snowmobile and hike in the snowy wilderness where the northern lights are often seen dancing above. 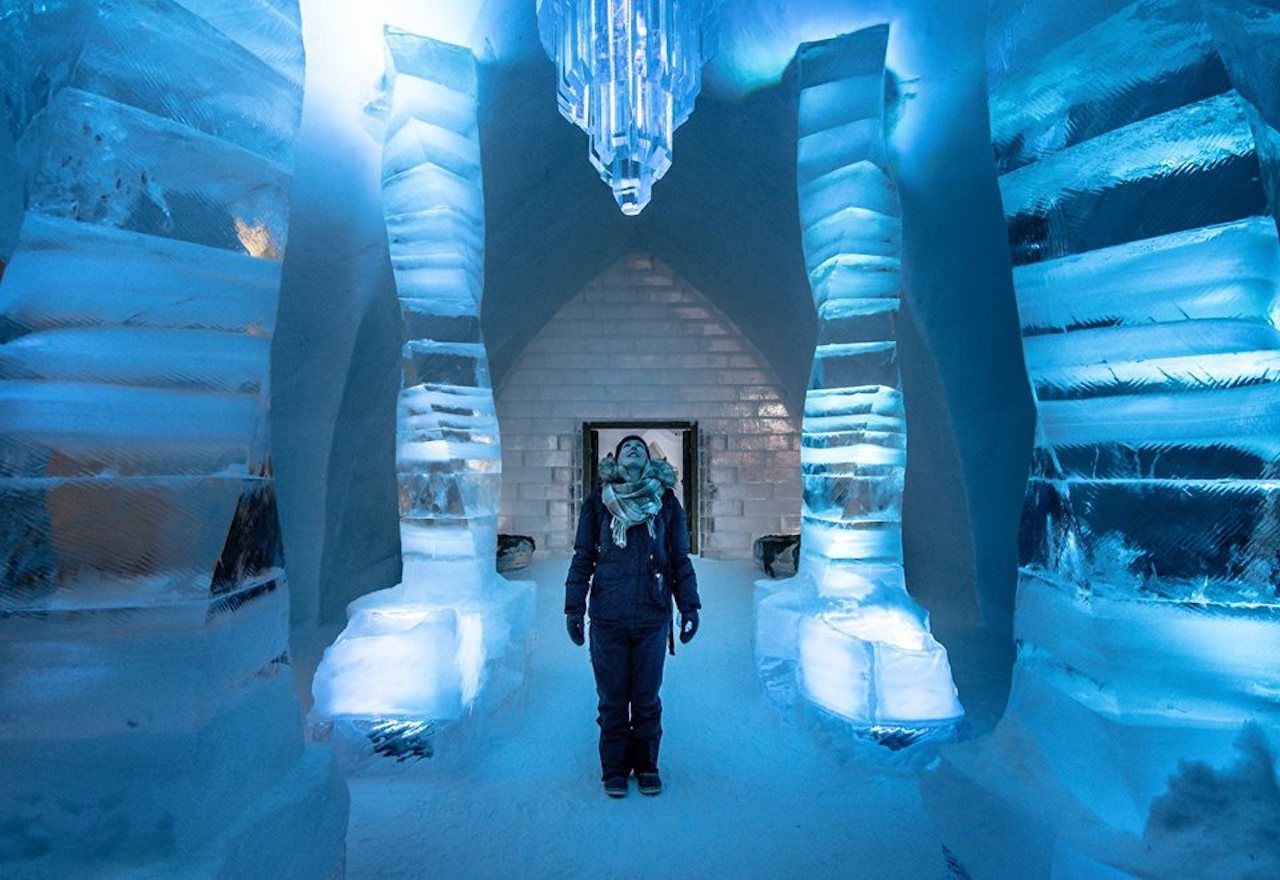 The Hotel de Glace on the outskirts of Quebec, Canada, knows how to make its guests feel cozy even when everything around them is frozen. Each room has a different theme and is filled with art, including ice sculptures, and some even have their own fireplace (yet nothing melts).

As expected, the temperature never exceeds 27 degrees Fahrenheit, but inside your room, you feel very sheltered from the elements. There’s a hot tub and sauna outside where you can soak to keep your toes from falling off. The hotel is located within the biggest winter park in North America, with snow slides you can use day and night, snowy slopes you can tube down, and a large skating rink illuminated at night. 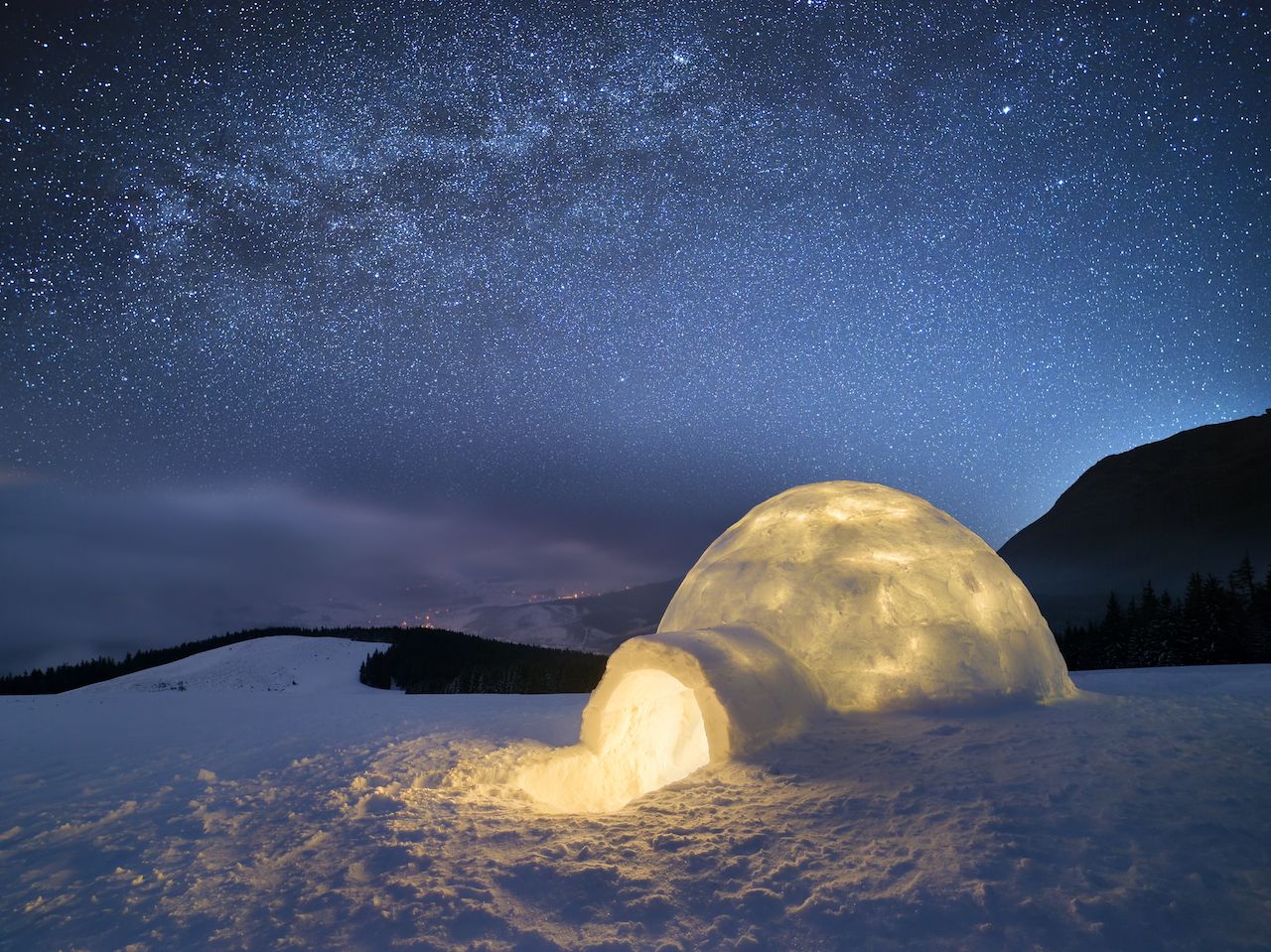 At the Schneedorf Igloo Hotel, located on one of the highest peaks of the Tyrolean Mountains, you get to sleep in an igloo that you built with your own hands. A guide is there to help you understand the techniques and skills required to build this unique dwelling. You work on it all day with a lunch break, and by nighttime, you get to try it out. If you prefer to skip the work, book one of the already built ice rooms. Choose between a four-person or “romantic” double room igloo surrounded by nature. 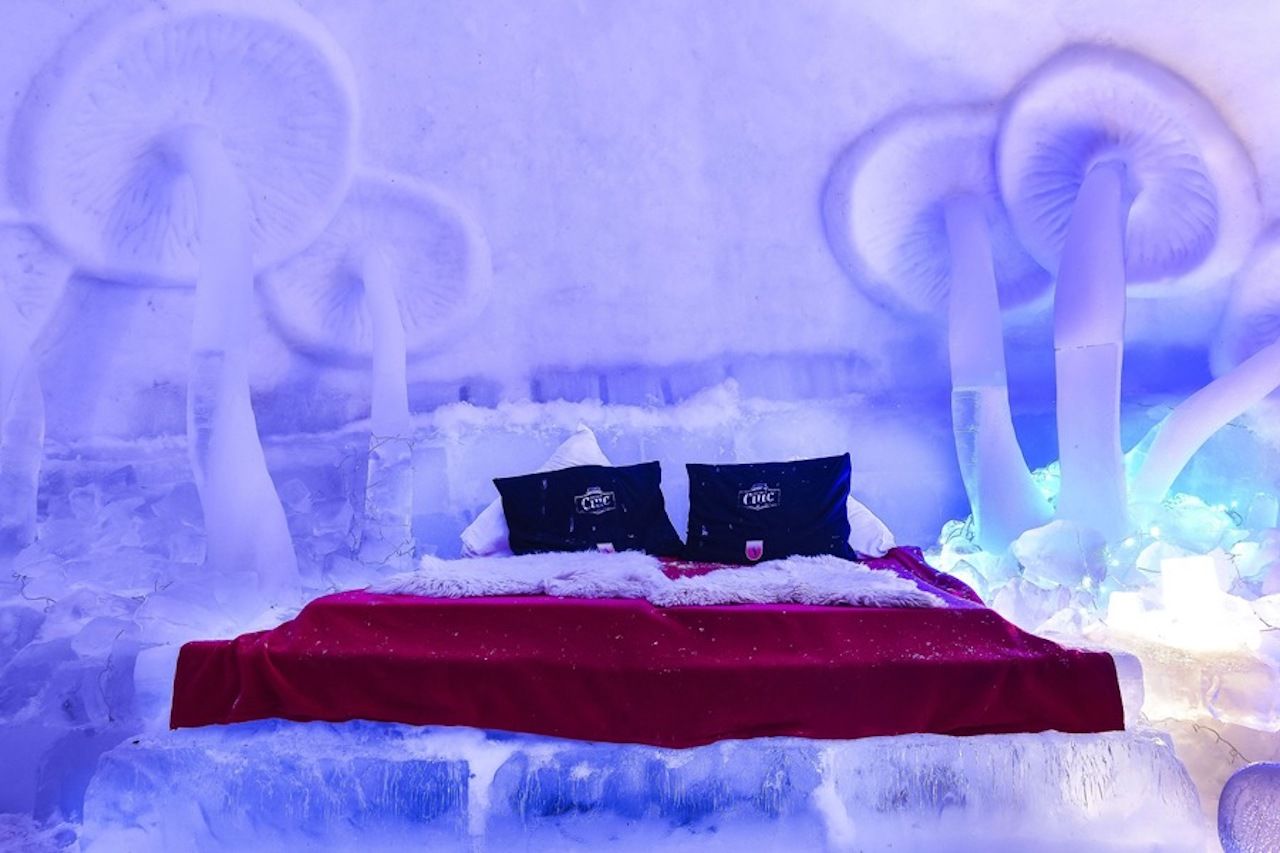 Opened in 2005 as the first of its kind in Eastern Europe, the Hotel of Ice at Balea Lake in Cartisoara greets its guests each winter. Accessible by cable car, the hotel is up in some of the highest peaks of the Carpathians. Every year, ice architects and artists carve all of it by hand using packed snow and ice blocks from the Balea Lake, the largest glacial lake in Romania. No two rooms are alike, and no two seasons are alike — to make it more interesting, they change the theme each year. This winter season, the theme is “Music on Ice,” and the rooms are named after famous musicians, from classical composers to rock and pop stars.

5. The SnowHotel at the SnowCastle Resort in Kemi, Finland 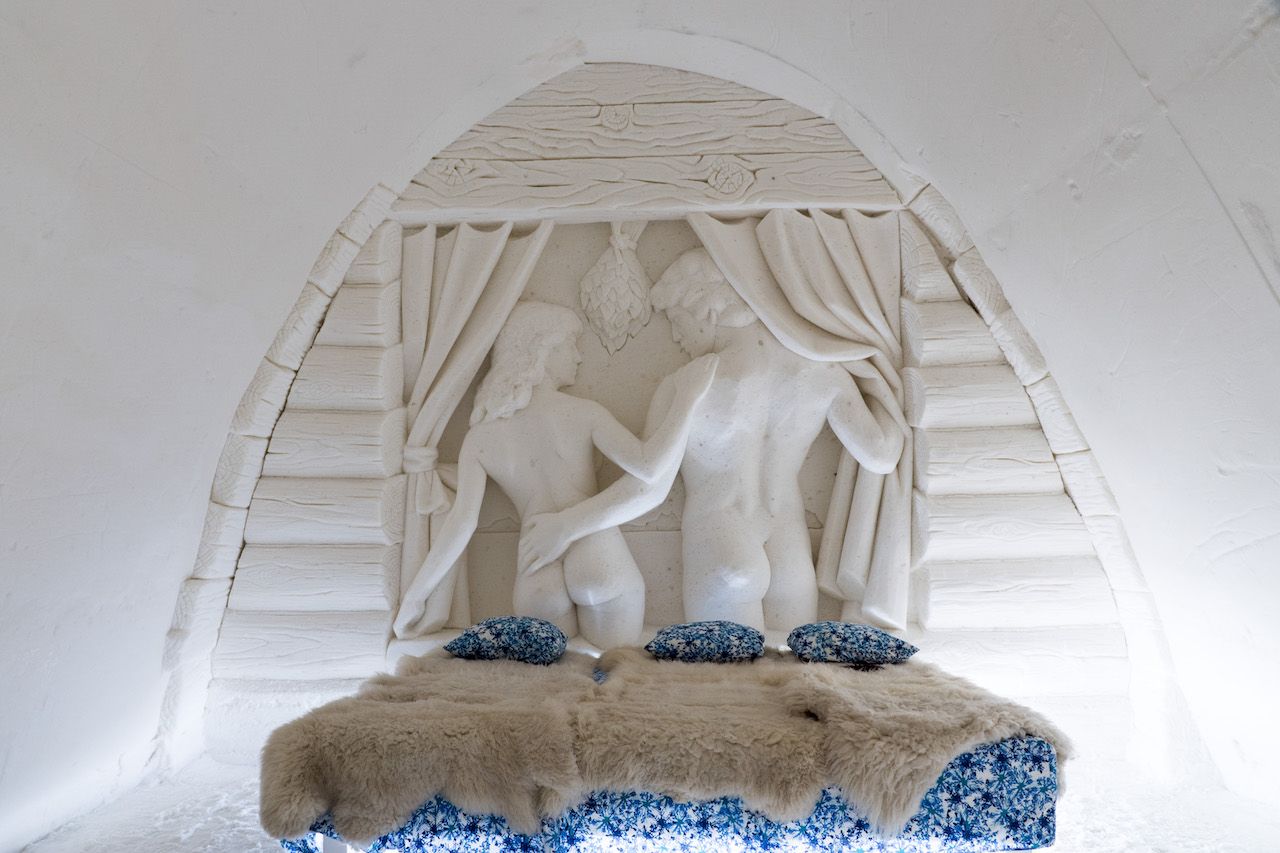 Part of the SnowCastle Resort in Kemi, the SnowHotel is considered a luxury hotel — even though the temperature inside your room is always around 23 degrees Fahrenheit, and you get sleeping bags meant for Arctic conditions and a lambskin cover for linens. The rooms are spacious and each has a unique carving near the bed.

When you’re not all cozy in your room, make sure to check out the snow castle. Built every winter since 1996 with snow and ice from seawater, the structure resembles a medieval castle beautifully decorated with sculpted walls. There are many winter activities to partake in Kemi, so don’t miss out on a day of ice karting, ice fishing, or even a fat bike safari. 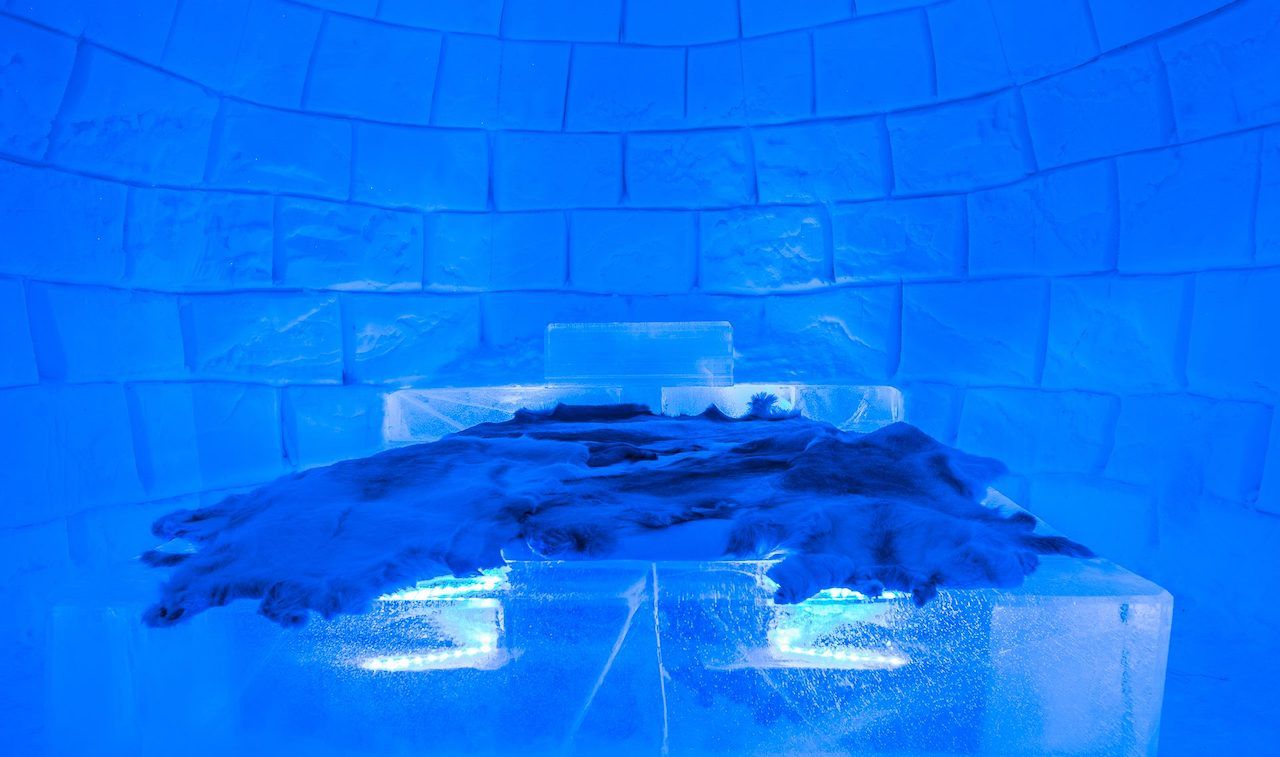 The northernmost ice hotel in the world, the Sorrisniva Igloo Hotel in Norway has been rebuilt every year in about five weeks by local workers and artists since 1999. Using new themes relating to local traditions, artists and craftsmen build the hotel’s 26 bedrooms, four suites, an ice bar, and an ice chapel and decorate them with magnificent ice carvings. Activities organized by this cool hotel include snowmobile safaris and meeting the Sami family and their reindeers to go sledding. 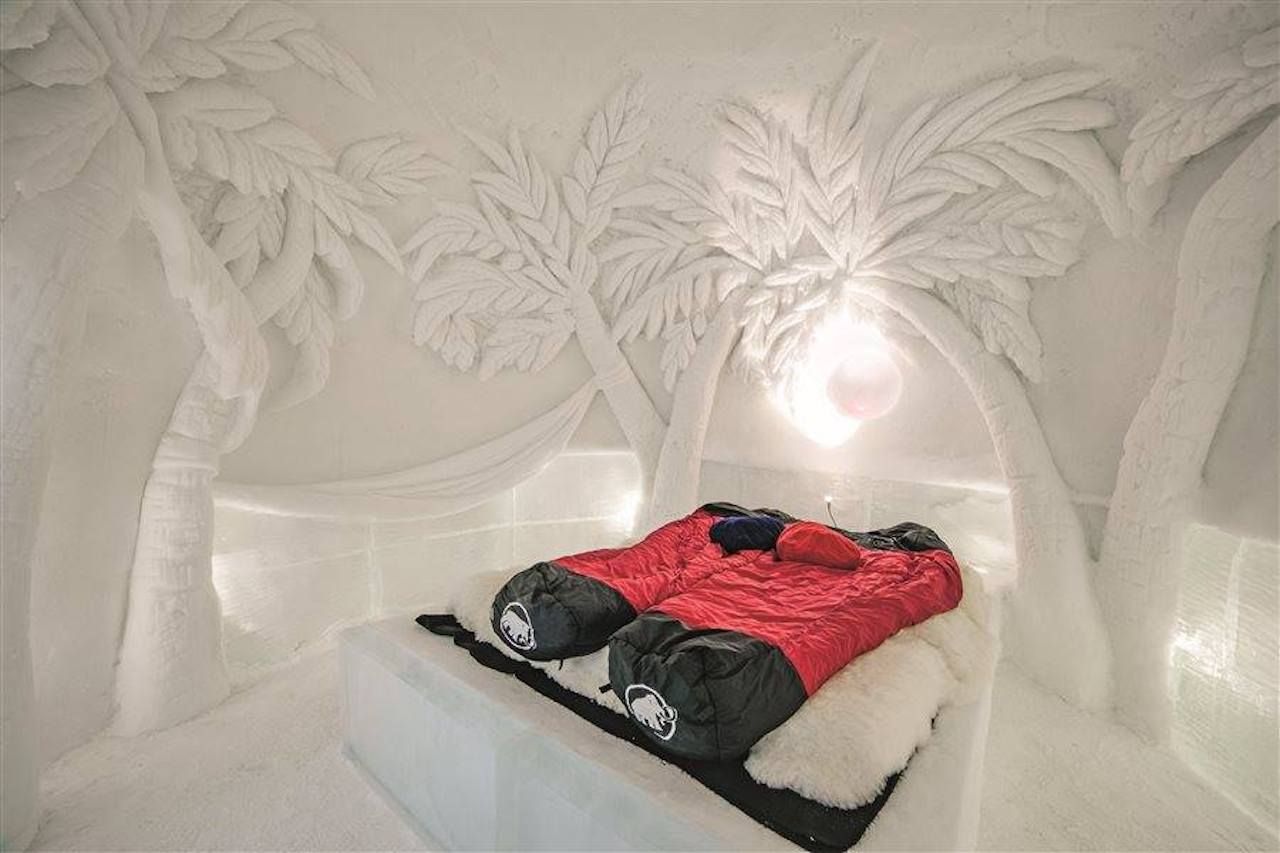 Based in Switzerland, the Igloo Dorf Villages have seven locations: five in Switzerland, one in Germany, and one in Austria. Each igloo village is built every year and decorated with sculptures according to individual themes. The rooms are all connected in a semicircle through a tunnel system, centered around a restaurant, and connected to a bar. You can book a group room or a romantic one — some even come with private jacuzzis and toilets — and all are beautifully decorated with stunning wall carvings.

Epic Stays10 Epic High-Alpine Hotels You Need To Stay in Before You Die
Tagged
Trip Planning Epic Stays
What did you think of this story?
Meh
Good
Awesome