In 2016, chef Brian Yazzie and his wife drove to the Standing Rock Indian Reservation in North Dakota. Earlier that year, a grassroots movement centered on the sovereignty of Indingeous people had emerged to protest the Dakota Access Pipeline. The protestors set up a camp in Standing Rock that at one point housed thousands of people, drawn to the site not just to plan the resistance movement but to celebrate and preserve Indiengous culture.

And they needed to eat. That’s where Yazzie came in.

“My front line was in the kitchen,” Yazzie tells me. Yazzie is Navajo, or Diné, the tribe’s preferred name, which means “the people” in their language. He’s the founder of Intertribal Foodways, a mobile catering company. “With a couple of volunteers, [we] were cooking three meals a day for over 2,500 people.”

Yazzie will never forget what he saw when he opened the pantry on his first day of orientation at the protests.

“I realized how that ancestral memory and trauma manifests,” he recalls. “There were rows of flour on the left side, and the right side, rows of lard cans and crisco. Just nothing but commodity food. Canned vegetables from the ‘60s or the ‘80s that people had donated. A memory came to me of looking through my ancestors, thinking this was what we had to cook with for survival.”

Yazzie immediately took to his social media channels, calling on people to donate wild game and fresh produce. The chef, who is now based in Minneapolis, has spent most of his professional career rebuilding the very concept of Indigenous cuisine. That means eschewing what he calls “survival staples” — flour, sugar, salt, and lard — ingredients introduced to Indigeous tribes by white settlers.

Survival staples have a complicated history. In the encyclopedia of Indigenous food, perhaps one of the most recognizable dishes is fry bread. Many Diné people grow up eating it at home, where their mothers and grandmothers prepared it for them. It carries resonances of home, family, and nostalgia, but its origins are rooted in strife: Fry bread is the product of The Long Walk, the forced relocation of the Diné people from Arizona to New Mexico in 1864.

The 18-day, 300-mile journey claimed the lives of 200 Diné people. The remaining 9,000 people were confined to a 40-square mile plot of land that resembled an internment camp and could not support the traditional Diné crops of corn, beans, and squash. The survivors invented fry bread as a source of nourishment from the flour and lard given to them by their captors.

Today, Yazzie’s work is focused on reviving the ingredients central to Diné cuisine before The Long Walk. When Yazzie travels to Navajo communities to teach youth how to cook and to provide meals to elders, he focuses on preparing dishes with ancestral ingredients: wild game, locally foraged herbs and plants, blue corn, wild rice, agave syrup in place of sugar, and almond, hemp, or walnut milk in place of dairy.

His goal is not just to reclaim the food his ancestors cultivated before colonization but also to teach Indigenous people how to prepare nutritious food that will support their long-term health. Heart disease is the leading cause of death among Native Americans, according to the Journal of the American Heart Association. The US Department of Health and Human Services Office of Minority Health recently reported that American Indian or Alaska Native adults are 50 percent more likely to be obese than non-Hispanic whites. And in the Diné nation specifically, about 20 percent of the population lives with diabetes. 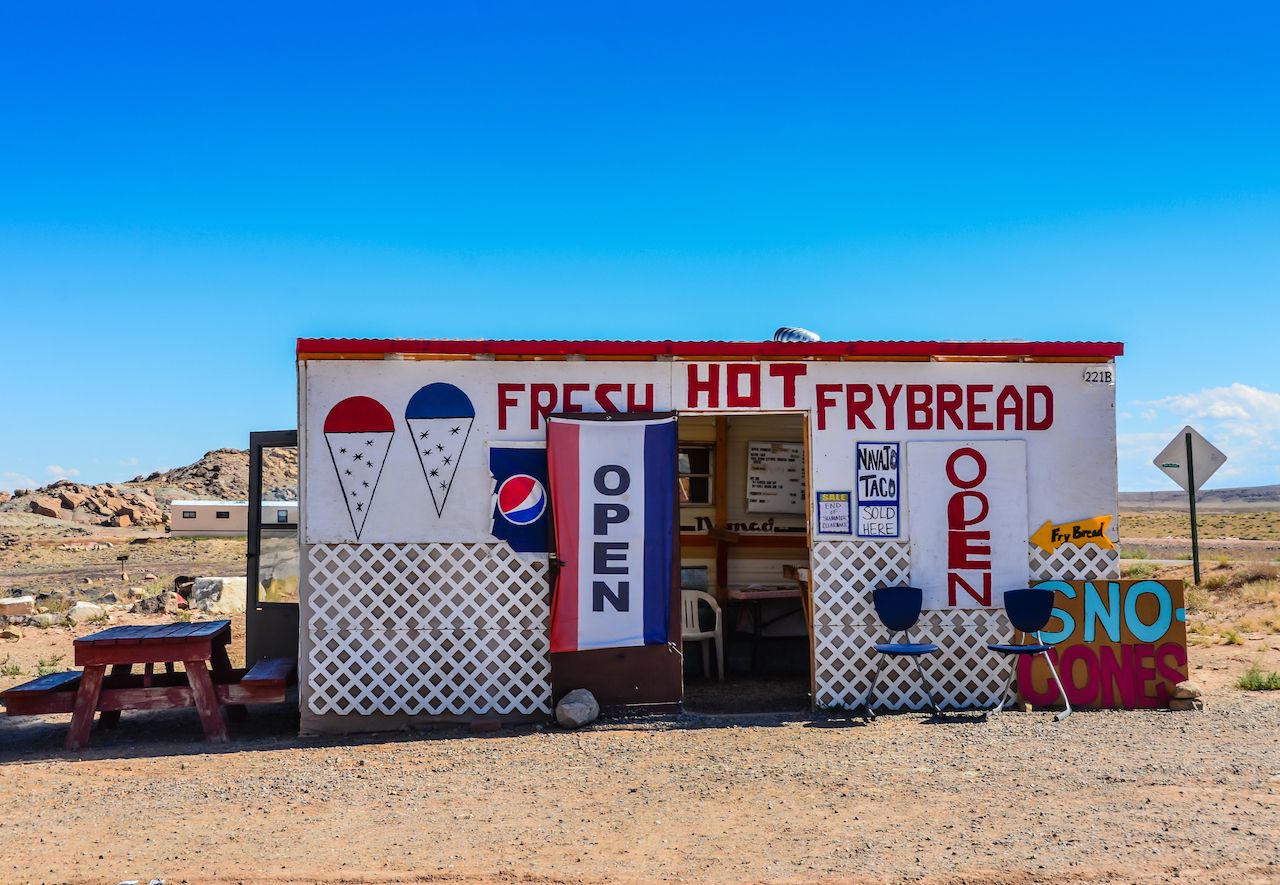 “A lot of families are still dependent on government rations, and a majority of families are still dependent on fry bread,” Yazzie says. “Not a lot of communities have access to fresh ingredients. [Many] tribal community members on our reservation live in rural areas. The closest gas station is at least 45 minutes away, but most tribal members do not have transportation.”

Yazzie’s push to center nutritious, Earth-grown vegetables in the Indigenous diet is part of a larger movement to decolonize the diverse cuisines of Native American people across the country. Yazzie, who has never cooked fry bread himself, acknowledges that it will likely always be present in the homes of many Diné people. He just doesn’t think it should be elevated as the best example of the dishes that ancestral Indigenous cuisine has to offer, and he’s actively working to de-center it: In 2017, Yazzie took part in a ultimately successful campaign to remove fry bread from the Miss Navajo Nation contest, where the Navajo taco had long been a staple.

“My perspective was [to] focus more on butchering lamb or sheep, or making traditional corn mush or tortillas out of fresh ground corn,” he says. Reimagining Indigenous food is just one step in this process. “Decolonization [is] not only food, but in the mind and body, in the spirituality, the way we carry ourselves.” 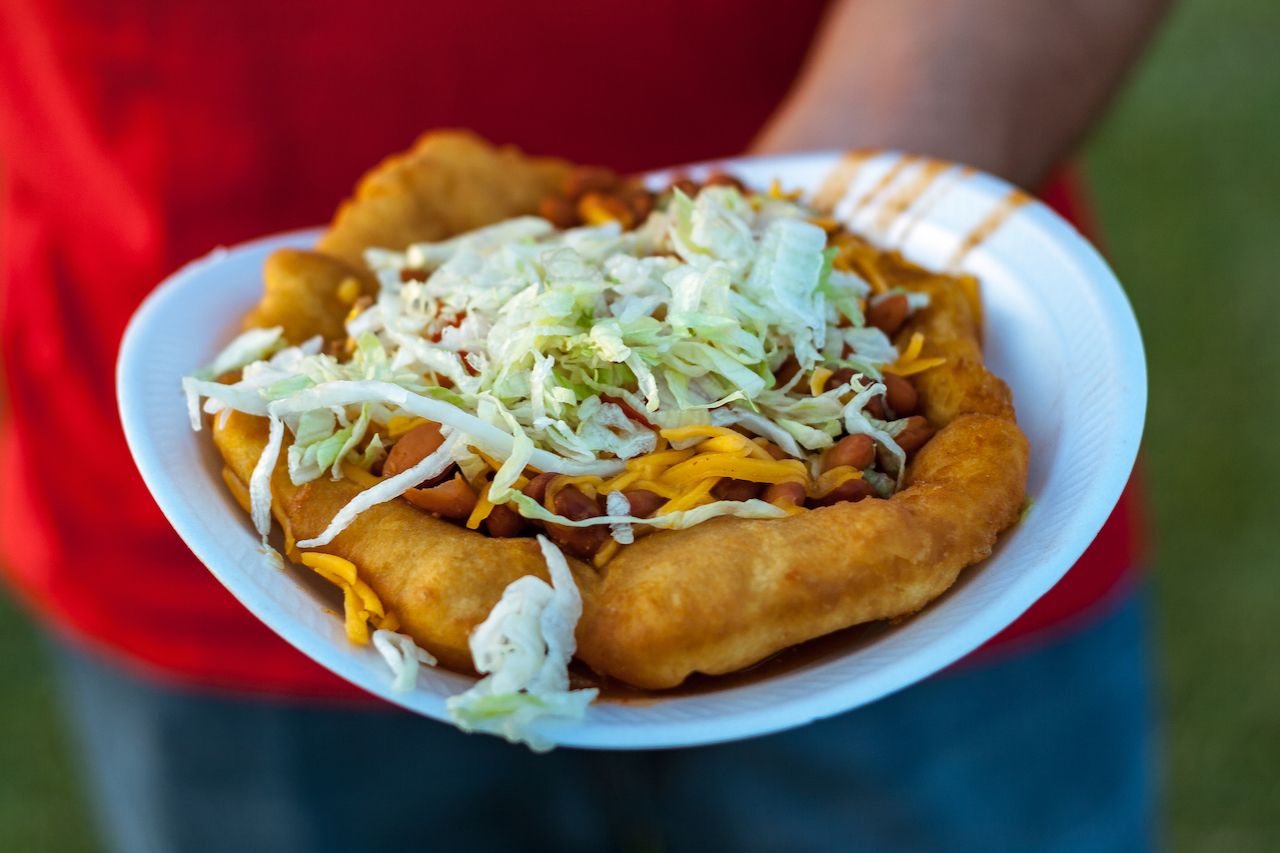 Still, for many Indigenous people, casting fry bread as a symbol of oppression and trauma doesn’t tell the whole story. In a 2019 article for NBC News, writer Simon Moya-Smith argued that for Navajo people, fry bread is “good for the heart and certainly the soul” because it is a reminder that Native Americans “did everything they could to survive aggressive encroachment and persecution.”

Fry bread tends to elicit these kinds of strong feelings.

“We’re not against fry bread, we just don’t do it,” Sean Sherman, Oglala Lakota, and founder of The Sioux Chef, tells me. “But it’s not going anywhere.”

For many years, Sherman operated the award-winning Tatanka Truck, a Minnesota-based food truck that served Indigenous cuisine like wahuwapa, or grilled corn on the cob, and a bison taco served not on fry bread but a base of grilled corn and beans. In 2017, Sherman sold the truck to prepare for the opening of the Indigenous Food Lab, a restaurant and educational space intended to “reintegrate Native Foods and Indigenous-focused Education into tribal communities” — which has been temporarily delayed due to the COVID-19 pandemic.

“Our main focus is North American Indigenous foods,” Sherman says. “We [study] Mexico all the way through Alaska, and we don’t really see the colonial borders of what is Mexico and what is Canada. We’re looking at the immense diversity that sits out there. I’m really trying to understand how people were surviving, what kind of foods were they utilizing, what they were growing, and food preservation and storage [techniques]. We basically mapped what an Indigenous food system is.”

Sherman says he isn’t interested in making exact replicas of Indigenous recipes from the 1500s or 1400s. Instead, his work focuses more on applying ancestral food knowledge to the problems facing Indigenous communities today. Like Yazzie, Sherman is concerned with the health problems facing many people living on tribal land. He believes that giving Indigenous food knowledge back to his people would be a powerful antidote to issues like food apartheid (a lack of access to nutritious, fresh food), disease, and poverty.

“If people could start growing in Indigenous gardens, utilizing diverse Indigenous seeds from the different regions, utilizing permaculture, and understanding that vast knowledge of wild plants around us and using all this food source that’s literally right outside our doors, we would see a huge swing in health for those communities,” Shermans says.

Giving Indigenous people food sovereignty — the right to control where their food comes from, and how it’s produced and distributed — is what Sherman calls a “food revolution and evolution.” And that’s just one piece of the process: Sherman also hopes that “educating and enticing” Indigenous people to grow their food will stimulate tribal economies.

“We really want to bring a lot of economic prosperity to those communities, and we want more Indigenous food producers to come out of this too. Because where I grew up on Pine Ridge, I don’t think we’ve ever seen [under] 70 percent unemployment,” Sherman says.

Fry bread will never disappear from Diné communities, and maybe it shouldn’t. It carries a dual significance, as a perpetual reminder of land theft and colonization but also as a symbol of endurance, struggle, and, ultimately, survival. The goal is not necessarily to eradicate fry bread from Indigenous memory. Instead, chefs like Yazzie and Sherman want to broaden the idea of what Indigeous cuisine can look and taste like when it focuses on pre-colonial ingredients, and to harness ancestral knowledge to take back power and agency over the health and prosperity of Native American communities.

“We can learn and benefit so much from Indigenous knowledge,” says Sherman, “by getting people to really think about the land that they’re standing on, and how we can learn from the ancestors that had lived there for millennia before them.”

LifestyleRez Roads Is Bringing #Vanlife To the Navajo Nation
Tagged
Food + Drink United States
What did you think of this story?
Meh
Good
Awesome