Newcomers to dim sum — the Chinese meal of shareable small bites, mostly buns and dumplings — might find the concept a tad intimidating: the bustling dining room full of chatting clusters of friends and family, leaning over pots of steaming tea, chopsticks in hand, as metal carts laden with metal bowls and bamboo steamers circulate between tables. Everyone probably looks like a professional, as though navigating the expansive dim sum menu is second nature. All it takes to become a master of dim sum is practice. Trust me, it’s worth putting in the time.

Like most Chinese food popular in the US, dim sum is Cantonese, originating in the province of Guangdong (sweet and sour pork, congee, and chow mein are all Cantonese in origin). Dim sum probably first appeared at the height of the Silk Road, a trade route connecting China to India, the Middle East, and North Africa.

Tea shops popped up along the route to accommodate weary travelers. Eventually, farmers from the surrounding areas would drop into the teahouses, too, hoping for companionship and stimulating conversation. Popular medical wisdom at the time dictated that tea helps stimulate digestion and cleanse the palette, so the tea houses began serving small snacks to enjoy while drinking tea — a tradition known as yum cha.

Immigrants brought dim sum to America where it flourished, particularly in the burgeoning Chinatown neighborhoods of places like New York City. Today, dim sum is one of the most popular forms of Chinese food in America, and it’s now commonly served for dinner, though in China its generally served for breakfast and brunch.

Dim sum started out as a way to gossip, gather news, and catch up with old friends and family members, and not much has changed about the atmosphere of a dim sum parlor: Gathering for dim sum is still a high-spirited social occasion, a time to bond with friends and family over good food.

Translated literally, dim sum means “touch the heart,” a poetic reference to the fact that dim sum is considered a light meal of snacks, not a full course dinner (though you’ll likely fill up quickly if you order enough from the menu). Dim sum is, by nature, a communal meal, meant to be shared. Conversation and laughter over dim sum — the apex of comfort food — alongside the ones you love is likely to touch your heart, too.

How to order dim sum 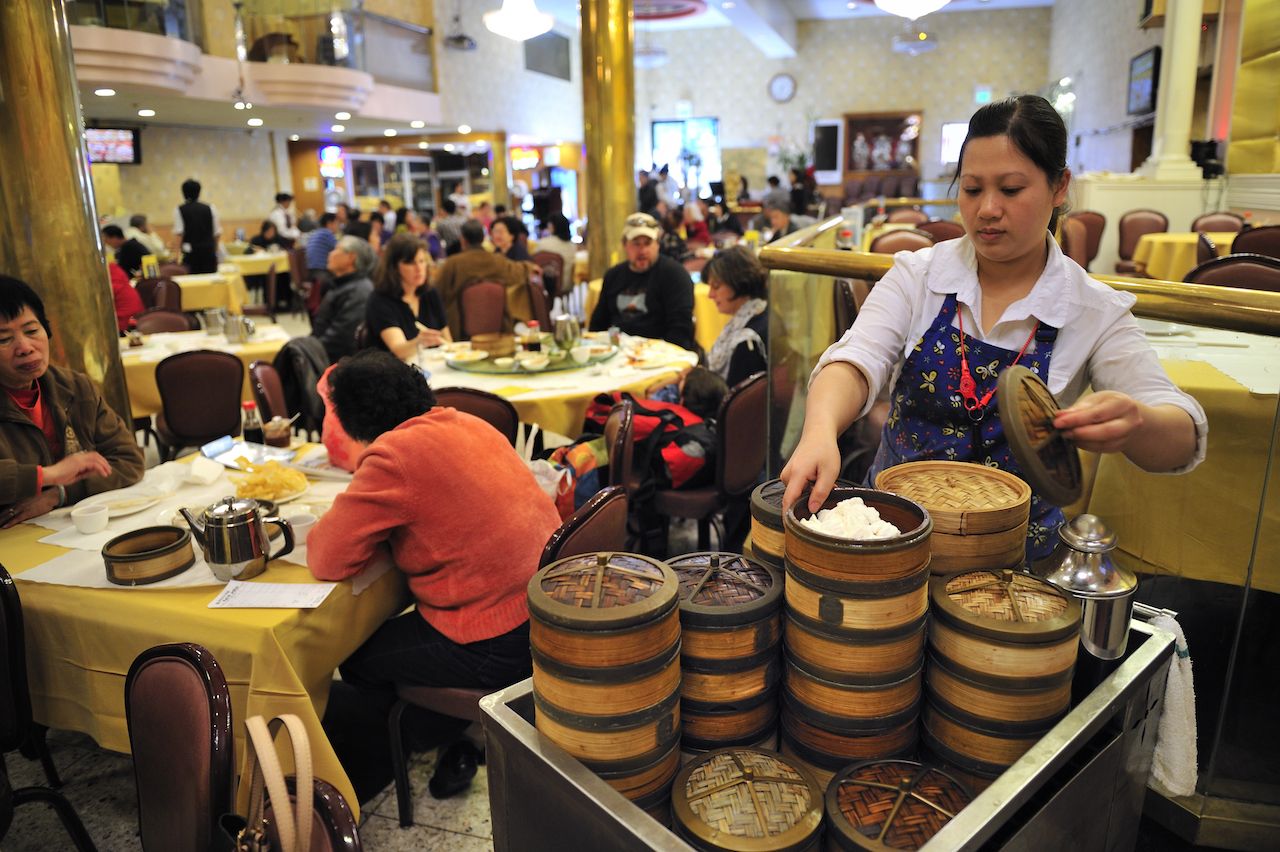 A crowded dim sum parlor is a cacophony of sounds, scents, and tastes. Upon entering the dining room, you’ll likely hear snippets of animated conversation, interspersed with the clatter of wheels rolling along the floor.

Once you make your way to a table, there are one of two ways to be served: Either you’ll be handed a paper menu on which you will check off boxes indicating what you’d like to order, or you’ll choose dim sum directly from the circulating carts. In the case of the latter, you’ll be given a dining card which will be stamped every time you take a new dish from the cart. It’s also perfectly acceptable to chase down the cart carrying a tasty looking dish before it gets to your table — just bring your stamp card with you.

You might also want to keep an eye on the doors to the kitchen. The carts rolling through the kitchen doors hold the freshest offerings.

What to drink at a dim sum restaurant 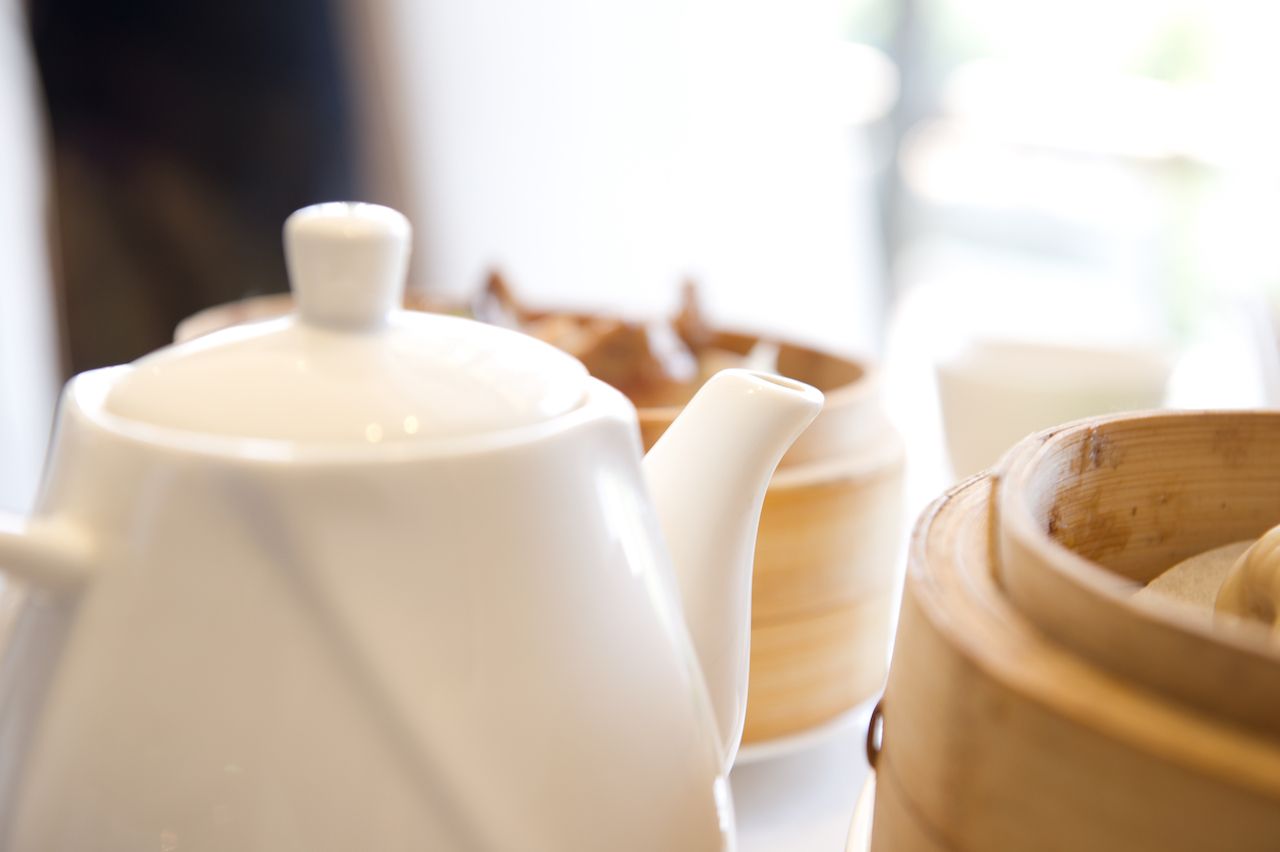 Before tackling the expansive array of dim sum on the menu, order a pot or two of tea. Dim sum is intended to be enjoyed alongside tea; it should not be treated as an afterthought. In fact, dim sum is so closely linked to tea that the term is sometimes used interchangeably with yum cha. However, yum cha is technically the phrase for a meal eaten in the morning and early afternoon, consisting of tea and dim sum.

The most common variety of tea at a dim sum restaurant is jasmine. If in doubt, stick to the basics. But if you want to branch out, there are other options available: A potent black tea — another traditional staple at the dim sum table — cuts through the oily dim sum dishes while a refreshing chrysanthemum tea has a slightly sweeter flavor. You might also find the much more familiar green tea (commonplace at most Americanized Chinese restaurants) on the menu.

Once the teapot is empty, prop the lid open so the top is uncovered to indicate you’re ready for a refill. Traditional etiquette dictates that your companions always refill your cup of tea during the meal, but if you slip up, don’t feel as though you’ll be dragged out by your collar for violating the rules of the restaurant. These traditions take some getting used to.

What to eat at a dim sum restaurant 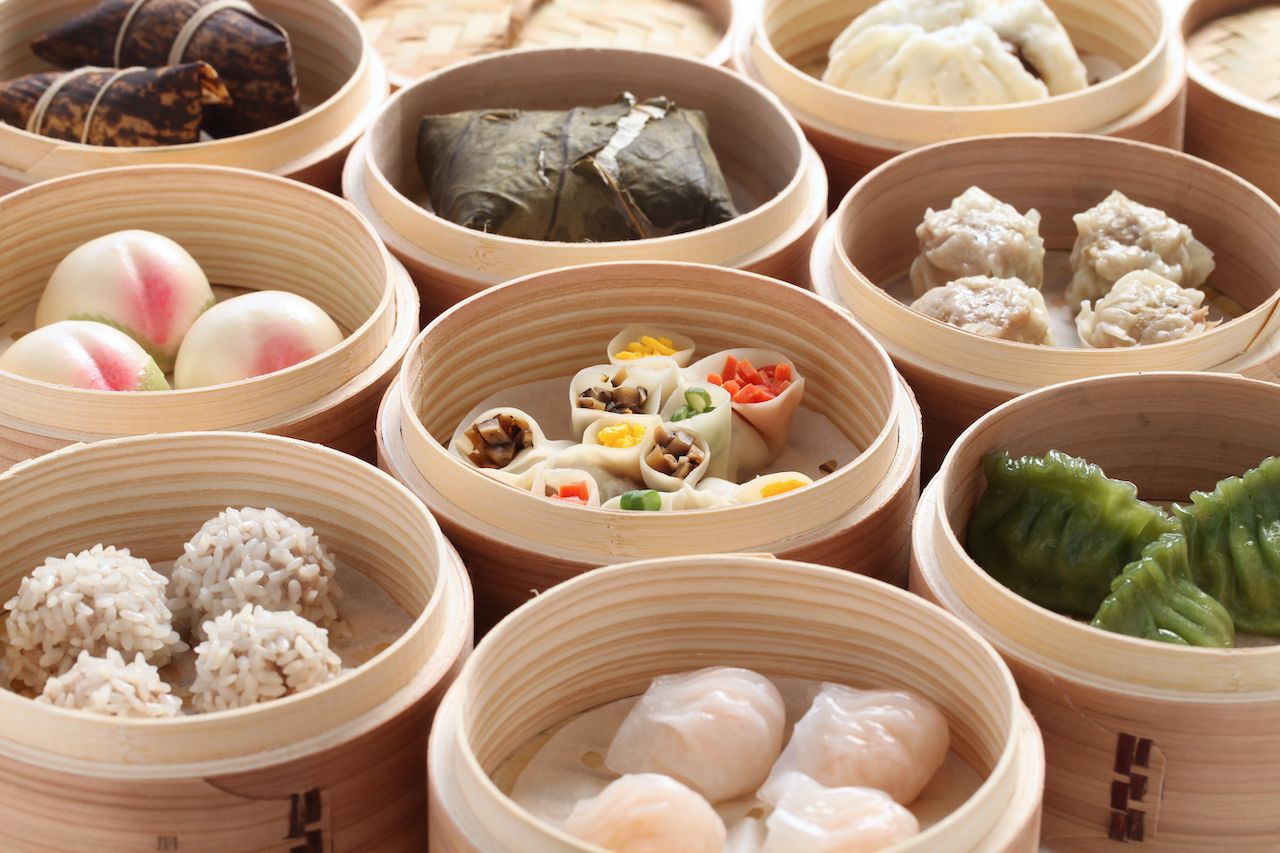 Once you’ve settled in, it’s time to start thinking about food. At Chinese restaurants that aren’t dim sum focused, rice is a central part of the meal. Not so at a dim sum parlor. While you can certainly order a side of rice, you’re not missing a crucial element of the ritual if you decide to skip it. Keep in mind that if you like spicy Chinese food, like hot pot, you won’t find it here. Unlike Sichuan food, in which peppers are central ingredients, Cantonese food is much milder and focused on fresh ingredients.

There are some basic dim sum items you might have encountered before: pot stickers, spring rolls, steamed pork buns, soup dumplings, and pork or shrimp shu mai (open-top dumplings). These are all good starting points for dim sum amateurs.

Your taste buds are going to perk up at every new smell as the carts come wheeling by your table, but it’s essential that you remember to pace yourself. Dim sum doesn’t come in courses, so you could potentially keep ordering new bamboo baskets of dumplings all afternoon — much of which will go to waste if you let excitement take over and order too much food before realizing you’re too full to finish. 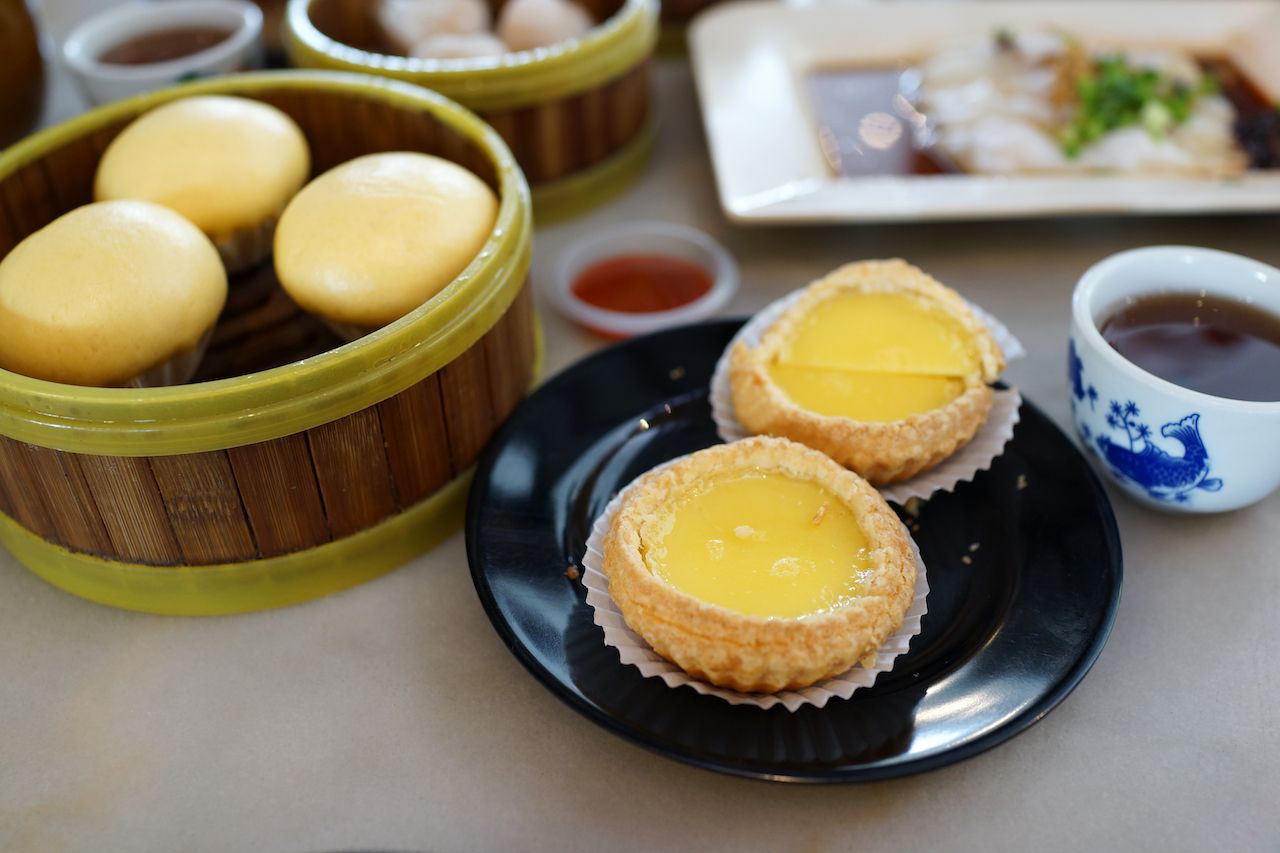 This light dessert is the perfect cap to a meal designed to leave you glowing from the satisfaction of a deceptively simple meal. Dim sum is an eruption of rich, earthy flavors and diverse textures ranging from crunchy to moist to pillowy soft. The mild creaminess of these dessert offerings underlines the most exciting aspect of dim sum: its surprising complexity.