With the recent release of Disney+, many people have signed away their credit cards and their next few weeks as they binge watch everything the new streaming service has to offer. Not only does Disney+ have the typical House of Mouse offerings, such as Disney princess and Marvel movies, but the wide-ranging selection is also made up of movies and shows from places you wouldn’t expect to be related in any way to it — National Geographic, 20th Century Fox, and so on. Instead of spending the foreseeable future indoors staring at a screen, there are a ton of options that’ll inspire you to get up and out there to explore the big, beautiful world we live in. Here are seven films available on Disney+ that will inspire your next trip. 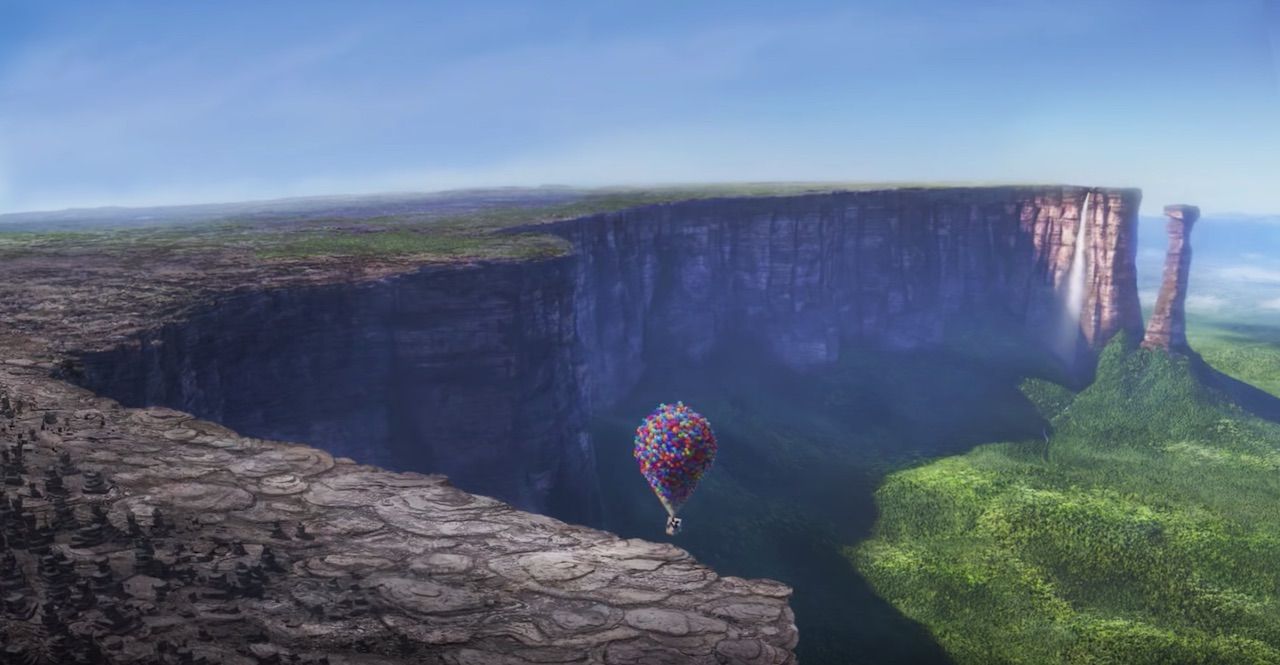 This Disney-Pixar animated collaboration follows Carl Fredricksen, a retired balloon salesman, on a journey to fulfill a promise to his wife Ellie. The pair met through their mutual love of a famous adventurer, Charles Muntz, who claimed to discover an exotic bird at Paradise Falls in South America. While revealed to be a lie, Muntz’s claim sparked Ellie’s dream to someday move her house to a cliff overlooking the very same falls. One day, Carl’s resolve is renewed and he ties thousands of balloons to his house to fly to the falls.

His journey from there is filled with unexpected surprises, good and bad, that showcase the movie’s main themes of learning to let go; cherishing the small moments as they come; and knowing that an adventure can be both far and wide, and in daily life. Besides making you constantly reach for the tissues, Up will inspire you to both spring for that dream trip you’ve always wanted to go on and explore the place you’re already in. 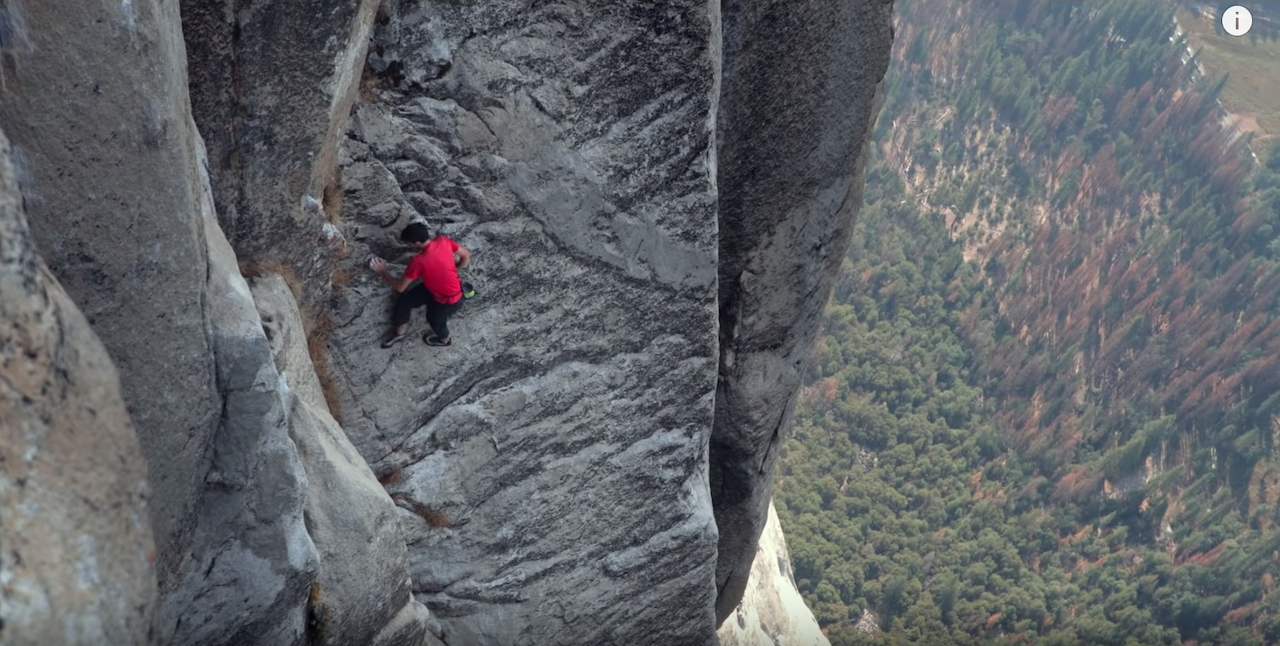 A National Geographic documentary, Free Solo is about free solo climber Alex Honnold as he prepares to achieve his lifelong dream of being the first person to solo climb El Capitan in Yosemite National Park, California. As the name suggests, free solo climbing involves climbing some surface without the assistance of ropes, a harness, or other equipment. While the name of the activity alone is already enough to give you goosebumps, El Capitan is a dizzying 3,000 feet. The documentary is interspersed with interviews with people from Alex’s life, like his mother and girlfriend, who highlight their worry over the climb. It also provides insight into Alex life, painting a picture of a man who is, surprisingly, relatable despite his dangerous desire. At its core, Alex is someone we can all see at least part of ourselves in — normal people with one crazy dream — though perhaps not to such an intense scale. Above all else, Free Solo will make you want to test your body’s limits and get outdoors.

One of the newer additions to the Disney Princess lineup, Moana is the daughter of her island’s chief and will one day become chief herself. While dutiful and loyal to her people, she’s spent her whole life with an innate curiosity about the world beyond her island, being particularly drawn to the sea. When the island’s food supply begins dying and Moana suggests going beyond the reef to figure out why, her father forbids her from doing so.

Of course, she sets sail anyway. Her mission to save her people is a beautiful one, marrying her sense of duty and adventure, which she previously thought were mutually exclusive, and showcasing the type of heroine she is: fearless, strong-willed, and adventurous. Moana will not only motivate you to indulge your curiosity and venture beyond, but it also relays an important lesson about our environment that’s especially topical — we have to take care of our planet, and taking too much for the sake of greed and vanity will only lead to negative consequences.

Set in Mexico, Coco is about a young boy named Miguel who yearns to become a musician one day. His family is completely against the idea and forbids him from pursuing music, but that doesn’t stop him from doing so in secret. During Día de los Muertos festivities, he unwittingly ends up in the Land of the Dead, and to return home, he must find a family member before sunrise.

A tearjerker if there ever was one, Coco offers a look into Mexican culture, from traditions to music, and will leave you with a newfound appreciation for it. It’ll make you want to experience Día de los Muertos in its home country, delve beneath the surface level of such a wonderfully rich culture, and hug your loved ones a little tighter. 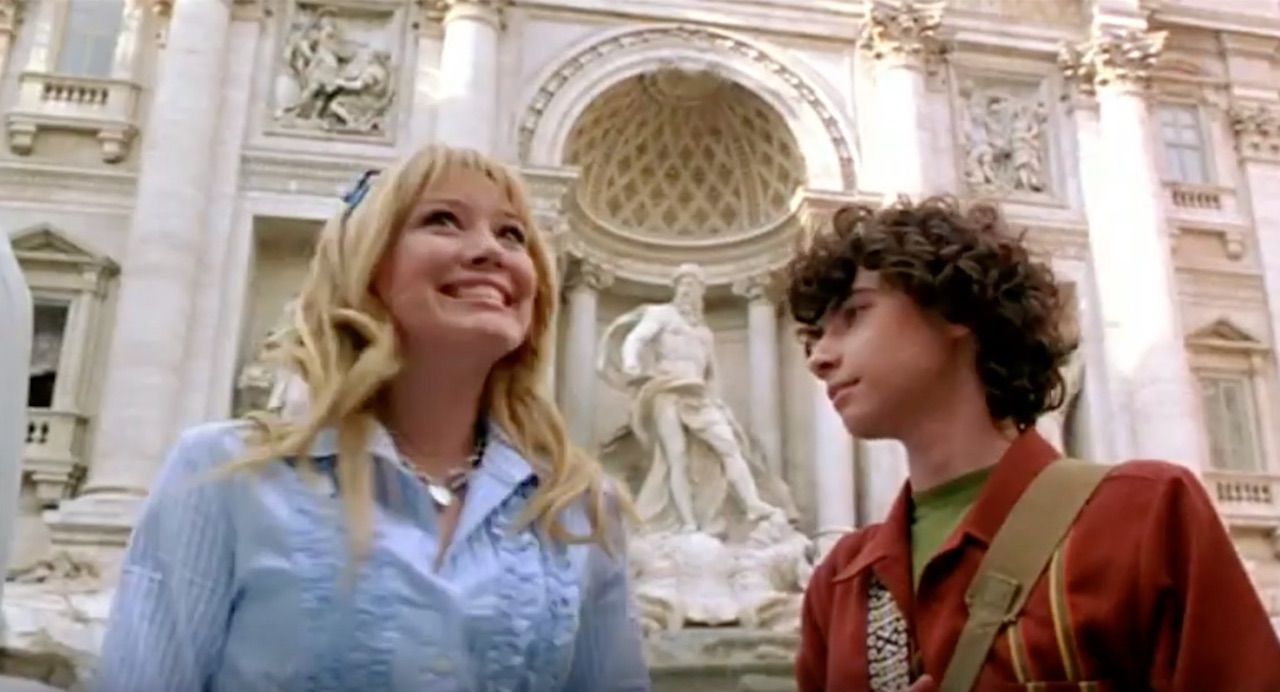 The Lizzie McGuire Movie is, for all intents and purposes, the finale to the television series of the same name (though there is a reboot in the works for Disney+). You don’t actually need to have watched the entire series to follow along or understand the movie’s takeaways, though you should because it’ll only add to your enjoyment, and it’s just a great show in general. The movie centers around Lizzie’s junior-high graduation trip to Rome (sidenote: what?) with several of her classmates.

Once she’s in Italy, Lizzie gets mistaken for a famous pop star, Isabella, as the two look identical. Crazy hijinks follow, and viewers get taken all around Rome as Lizzie impersonates Isabella. She falls in love with the city, and some boys along the way, but regardless of its far-fetched events, the movie will make you want to book tickets to Italy faster than you can say its full title. The film also imparts some wisdom that can apply to any trip: Not everything will go as planned, and sometimes, you just have to embrace the moment as it happens. 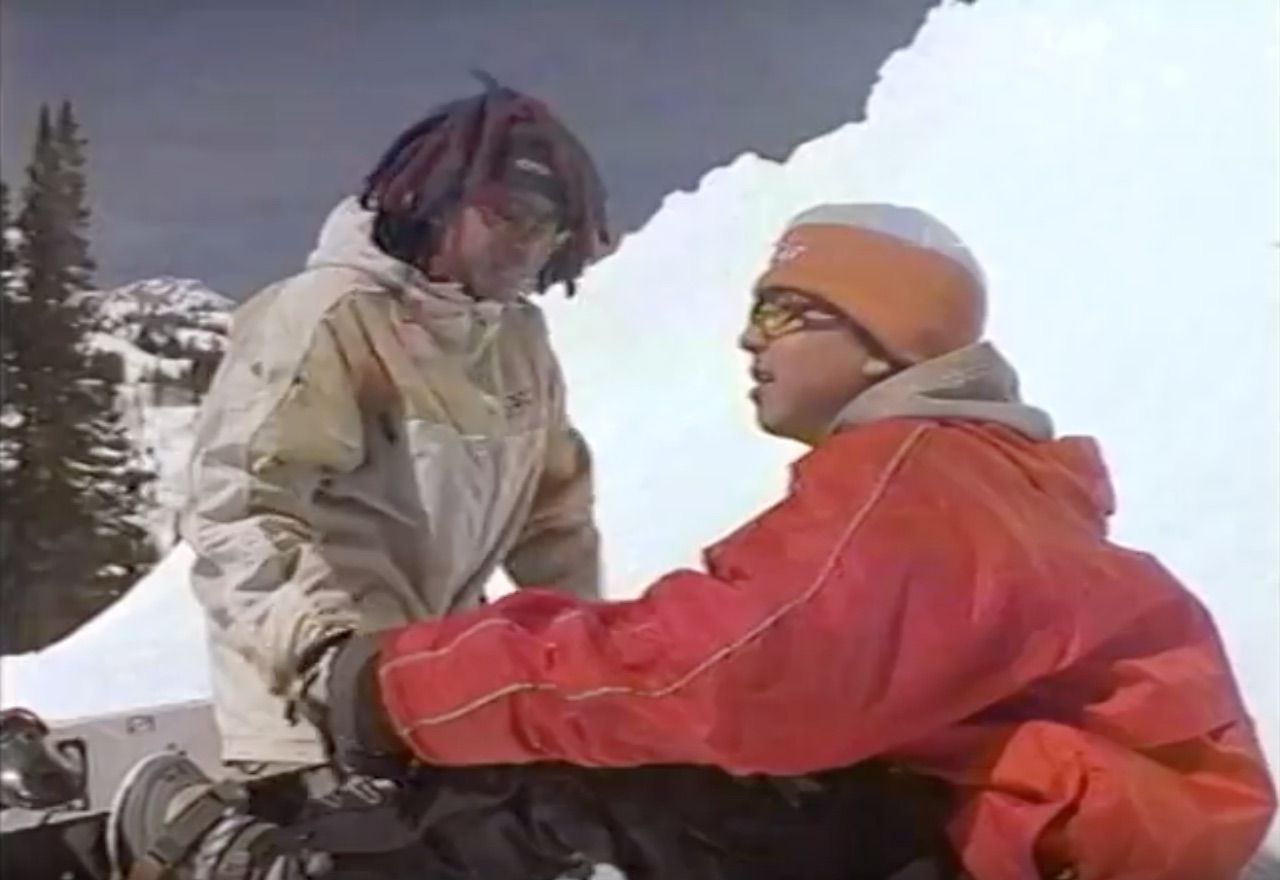 An oldie but a goodie, this Disney Channel Original Movie might just give you the push you need to make that big move somewhere, whether you want to live abroad or move within country lines. In Johnny Tsunami, the main character is Johnny Kapahaala, a teenage surfer living a good, comfortable life in Hawaii. When his father gets a job transfer, Johnny and his parents have to move to a place that’s quite the antithesis of a tropical paradise — Vermont.

The cold, snowy landscape is a drastic change for the family, particularly Johnny, who attempts to make the most of it by learning how to snowboard because he figures it’s similar enough to surfing. What ensues is a heart-warming, albeit a little cheesy, tale that’ll leave you wanting to get out of your comfort zone and visit someplace completely different than what you’re used to. Whether that’s just a temporary trip or you’re actually taking the plunge and moving abroad, what’s for sure is that if a kid can do it, so can you. 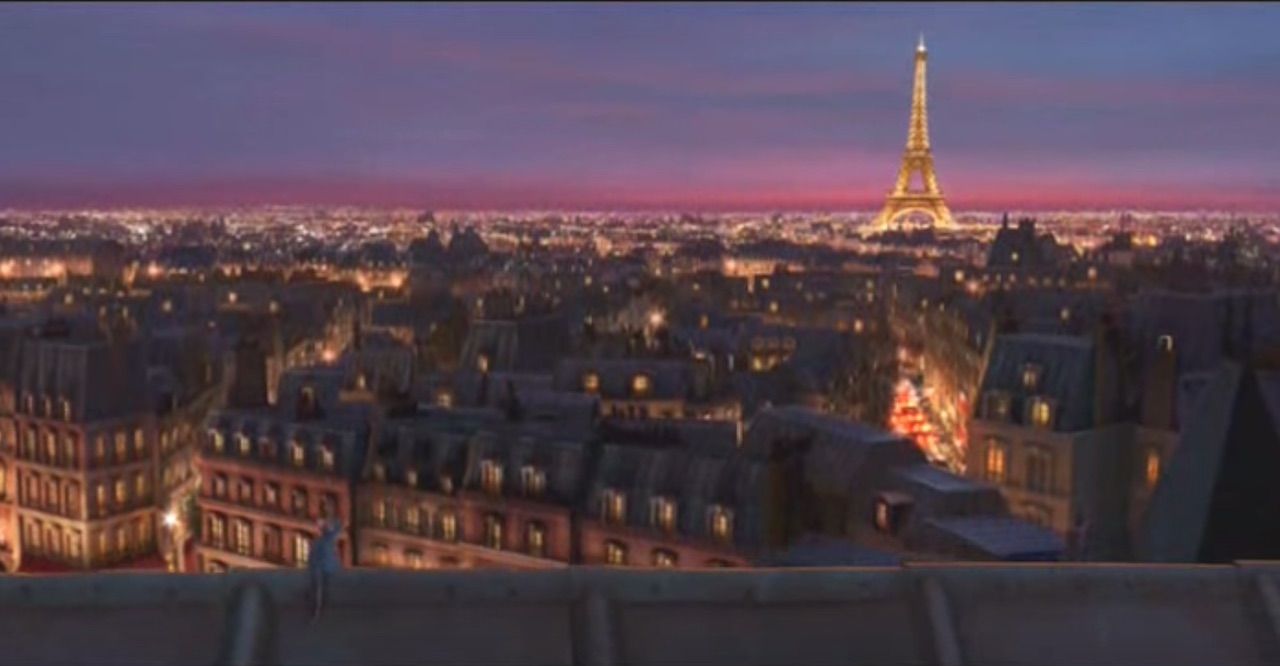 While many of us wouldn’t want to see a rat running through the kitchen of the restaurant we’re eating at, let alone touching the food, there’s something about Ratatouille that assuages any fears we might have about rats and makes them seem endearing for the nearly two hour runtime. Set in Paris, gifted Remy the rat dreams of becoming a famous French chef, but the likelihood of it happening seems unlikely, for obvious reasons.

One day Remy observes a garbage boy, Alfredo, attempt to fix a spilled soup and Remy secretly fixes his mistakes. He’s caught in the act by Alfredo, and the two form an unusual partnership so that Alfredo can keep his job and Remy can be a chef. There’s a wide array of French cuisine shown throughout the movie that looks absolutely delectable, rat chef aside. There’s no better place to try French food than France itself, but if you can’t make it there, then hopefully the film will push you to try some new cuisines wherever you’re based.

MoviesWhere To Travel According To Your Favorite Disney Princess
Tagged
Entertainment
What did you think of this story?
Meh
Good
Awesome