Finding your seat on an airplane is like the first day of class. You could by some miracle end up sitting next to the love of your life who you just haven’t met yet, or it could be that person who breathes too loud and never stops talking. In movies like Can You Keep a Secret?, romance that starts on a plane seems all too possible. Reality can be a little different.

Two well-traveled Matador staffers try to get to the bottom of it: Is finding love on a plane reality or fantasy? Eben Diskin, senior staff writer, thinks the idea of meeting people on planes is nothing more than a Hollywood fantasy, while deputy editor Morgane Croissant is more optimistic.

Let’s get something straight: I love romantic comedies. There’s the formulaic plot that never lets you down, the improbable but not-quite-impossible meet-cute moments, and the hilarious best friend who always seems to disappear halfway through the movie. Love it all. Problem is, these flicks plant a false seed of hope in our brains.

Am I ever gonna shack up with a girl with short-term memory loss and take valuable time out of my busy schedule to remind her each day why she fell in love with me? Certainly not. But might I meet a woman with Drew Barrymore’s girl-next-door charm at a breakfast diner in Hawaii? Sure. Maybe. But that couldn’t happen on a plane.

I took my first flight when I was 17. What I knew to expect came from the movies: I’d settle into my window seat, a Victoria’s Secret model would park herself next to me, and we’d subtly fight over the armrest. I’d ask for her number, and she’d say something like “if it’s meant to be, we’ll find each other in Philadelphia” (our destination). After landing, I’d wander into a cozy independent bookstore and realize she was reaching for the same book from the opposite side of the bookcase. The rest, as they say in Hollywood, would be history.

Instead I found myself next to a 50-year-old man wearing a StarCraft shirt who snored while he was awake. Nothing against StarCraft guy — who was fascinating in his own right, I’m sure — but he’s not exactly the stuff Hollywood romance is made of. —ED

It’s a reality because: Meeting people on airplanes is as easy as anywhere else 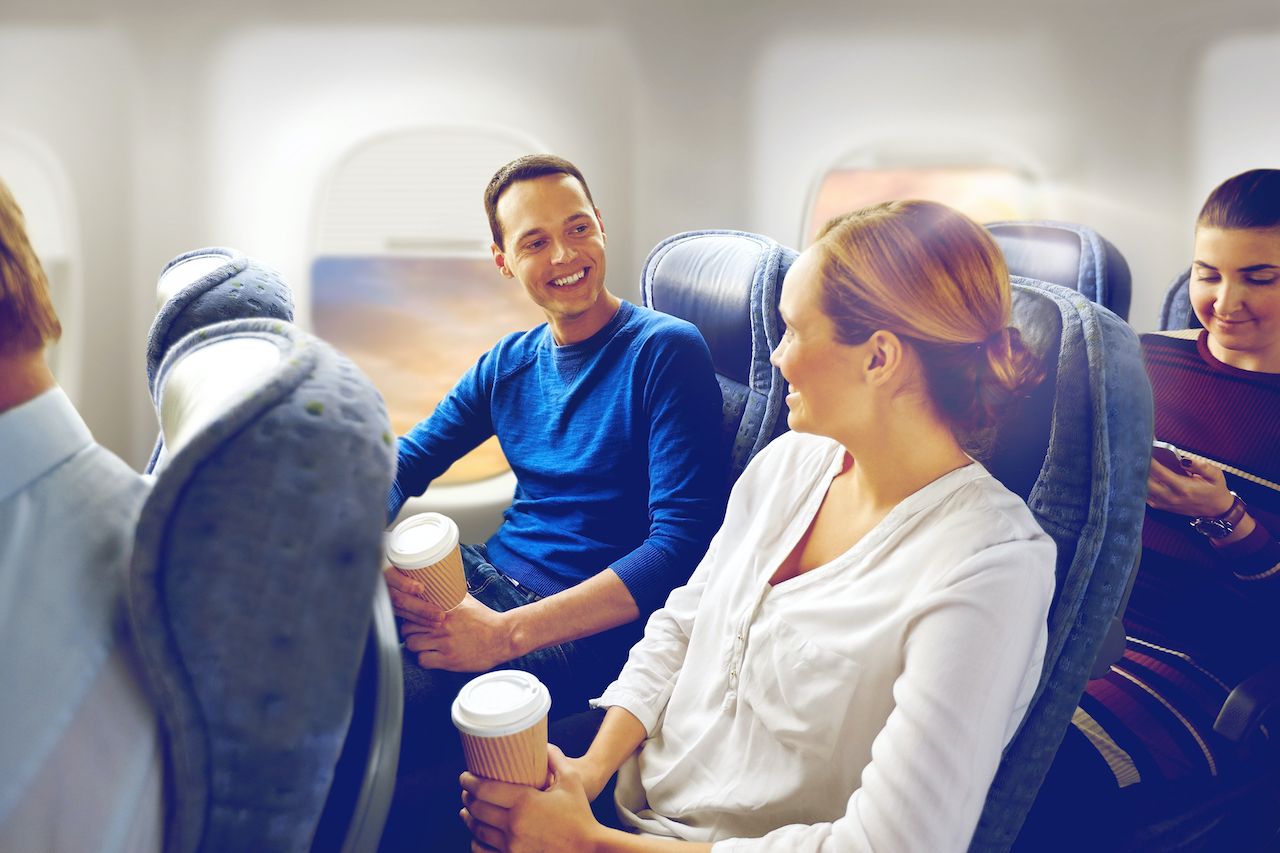 Rom-com meet-cutes are hardly based in reality. Nobody falls in love with their wedding planner (like in The Wedding Planner) or with the hot brother of the person you’re swapping houses with over Christmas (The Holiday). And it’s not likely that someone will spill all of their secrets to their plane seatmate because they think they’re going to crash (Can You Keep a Secret?).

Yet Hollywood aside, airplanes are as good a place as any to meet someone. You’re seated beside a potential lover in an enclosed place that creates a sort of forced intimacy. There’s food and drinks to keep you satiated. And just the fact that you’re traveling is great fuel for an interesting and revealing chat. Being on a flight is certainly more favorable to start a lovely relationship than being at a meat market on a Saturday night.

I met my partner of 12 years on a ferry sailing between Ireland and France. Our environment, as well as our travel plans and our previous trips, were our main topics of conversation. Spending 19 hours on a boat with very little else to do than sharing and connecting is what allowed us to develop a liking for each other, and it can easily be replicated on a metal tube 30,000 feet up in the sky. —MC

It’s a fantasy because: The motivation just isn’t there

My seatmates have all been relatively uniform whether I’m taking a domestic or international flight. The same goes for trains and busses. They’re usually perfectly pleasant folks who make a bit of small talk before settling into the digital ether for the next three hours. It’s made me realize that most people don’t really want to meet people on planes. They just want to get through the travel experience with as little frustration as possible.

Traveling can be a chore with the security lines, crowds, delays, and other minor inconveniences that compound to put you in a bad mood. Finding peace by shutting everything out in the airport isn’t anti-social, it’s a self-preservation technique. But that same self preservation also means closing yourself off to potentially rewarding social interactions.

Call it a glass-half-empty take, but in an environment where everyone is exhausted, frustrated, and impatient, socializing with a stranger is often just too much work. —ED

It’s a reality because: You’re not at your best in an airplane, and that’s a good thing

Nobody looks good while flying. Travelers don’t bother putting on a full face of make-up for a 10-hour transatlantic flight, nor do they wear their fancy evening gowns. We’re all in our sweatpants with our hair tied back, trying to be as comfortable as possible. Taking a long flight in coach is the great equalizer and the great revealer. And what better times than when we’re at our most genuine to meet someone? There’s no smokescreen and games, you can be yourself and meet someone who is too, and you can easily connect through the shared ordeal of not having enough money for a business class seat. —MC

It’s a fantasy because: What are the odds? 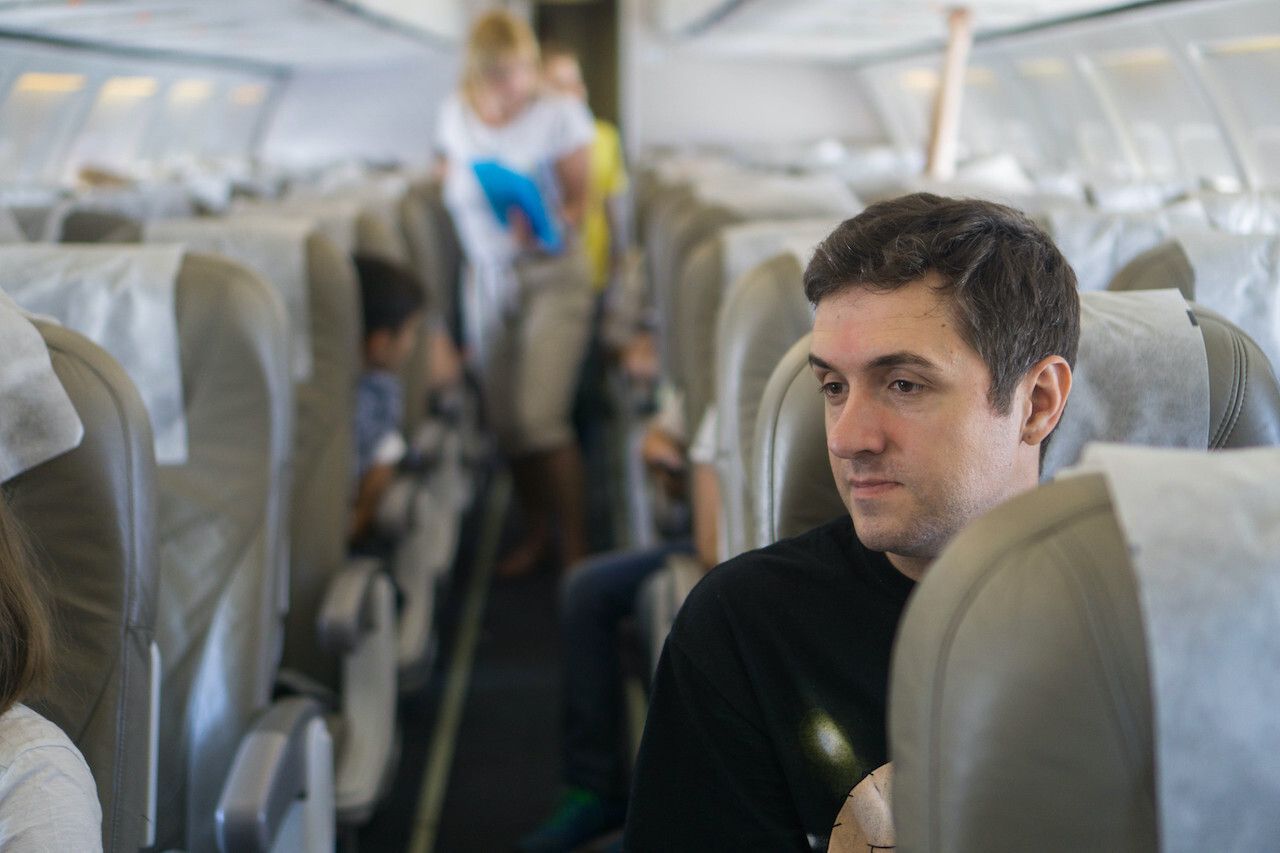 My string of lackluster experiences got me thinking: what are my odds, anyway? I could strike up a conversation with pretty much anyone sitting next to me on a plane, especially since they’re a captive audience. But what’s the chance that it’s someone I connect with and then stay in touch with? This could be a romantic or platonic connection, but for the purpose of argument — and to follow the Hollywood cliche — let’s talk romance (at least romance from my perspective as a single, heterosexual man).

Some back of the napkin math using demographic data from Statista:

The data site states there are about 136 million women in the US of marital age, roughly half of whom are already married (and that doesn’t count the ones in committed partnerships). Of the remaining, say 20 percent are a potential match in age and personality. Then you have to narrow down by people who would agree there’s a connection. We could keep going, but let’s leave it there and call it 3 million chances to fall in love with someone in the US for my particular interests.

Three million may sound like a lot, but one of those people also has to be on the same flight as you on the same day and time. They also have to be sitting next to you. The odds are, frankly, not great.

This isn’t meant to depress you, just help you adjust your expectations. I’ll crossing my fingers that I’ll actually meet someone on a plane, but it seems more unlikely than a Tom Hanks and Meg Ryan movie ending in a murder-suicide. —ED

It’s a reality because: Only people open to connecting will do so

Most travelers see flights as a way to get from point A to point B and refuse to see it as an opportunity for connection, even on a long trip. Some go as far as comparing a chatty seatmate to a screaming infant — they are supposedly just as annoying. At Matador Network, we like to say that “travel is people,” meaning that what makes travel so great are the individuals we meet along the way, and it starts in the airplane.

Not engaging with the person beside whom you’re going to be seating for the next few hours is a waste of a good opportunity. Don’t spend your entire flight hours sleeping or watching corny movies on a tiny screen, and instead talk with your neighbor. After all, that person is going to the same place as you — aren’t you interested about what they’re going to be doing there? And who knows, they may turn out to be a lover, friend, or they’ll remain that cool, bizarre, fun person you met on a plane. You’ll never until you open up to them. —MC

Food + DrinkThe 6 Tastiest Foods To Replace Your Awful Inflight Meal, According To Chefs
What did you think of this story?
Meh
Good
Awesome