Usually when people stay in hotels, they try not think of what’s happened in the room before them. You just trust that the housekeepers know what they’re doing (and maybe wipe down your TV remote with an antibacterial sheet).

But that’s not the case with the hotels below, which all served as brothels at some point in their history. Aside from what you can probably guess happened in your hotel room if it used to be a house of ill repute, it’s also fun to think about who may have stayed there (Jesse James? Doc Holliday?) and the conversations that transpired. It’s pretty amazing to think you may, 150 years later, be sitting in the same spot where an outlaw planned a train robbery or madam sat as she planned to con a cowboy out of his poker winnings.

Though the history of the American Wild West is fascinating, it’s also worth noting that most women who worked in brothels weren’t there by choice, and likely didn’t have the agency over their bodies all women deserve. Sex trafficking is still a huge problem globally, and knowing how to spot the signs of someone being trafficked can save a life.

But if you’re a history buff, consider booking a room at one of the brothel hotels below to step (err, sleep?) in the footsteps of history.

We hope you love the hotels we profiled below! Just so you know, Matador may collect a small commission from the links on this page if you decide to book a stay. Listed prices are accurate as of the time of publication. 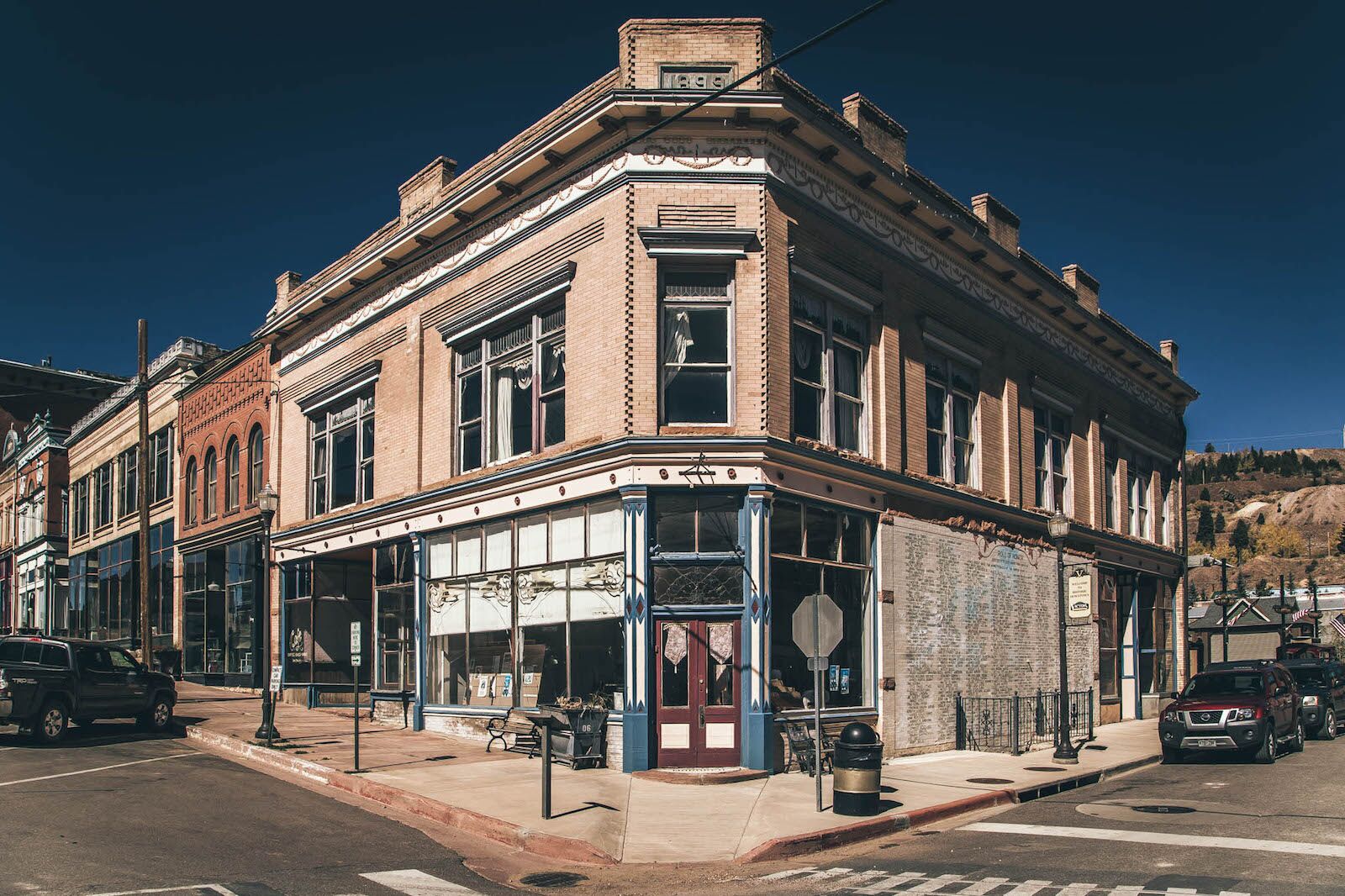 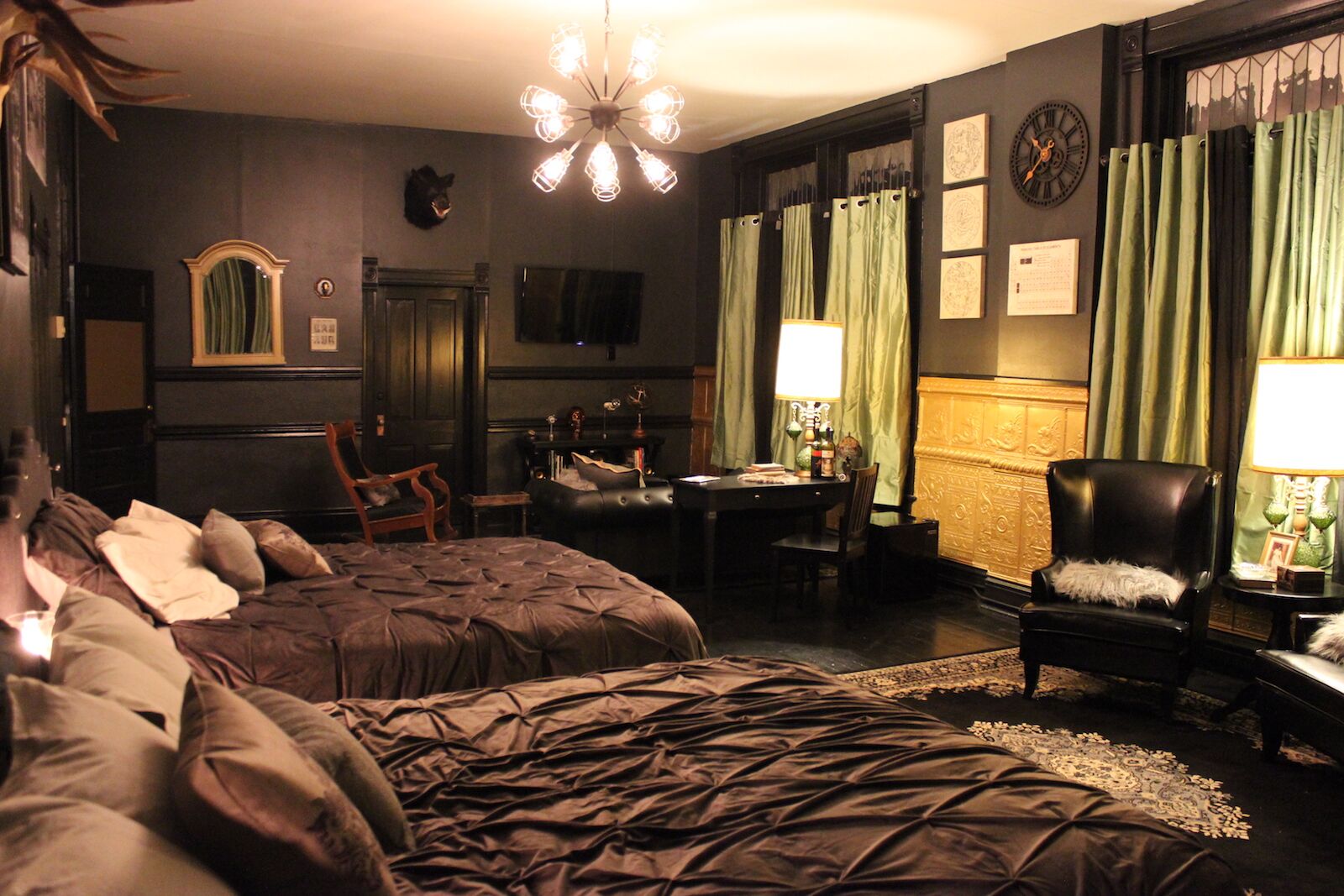 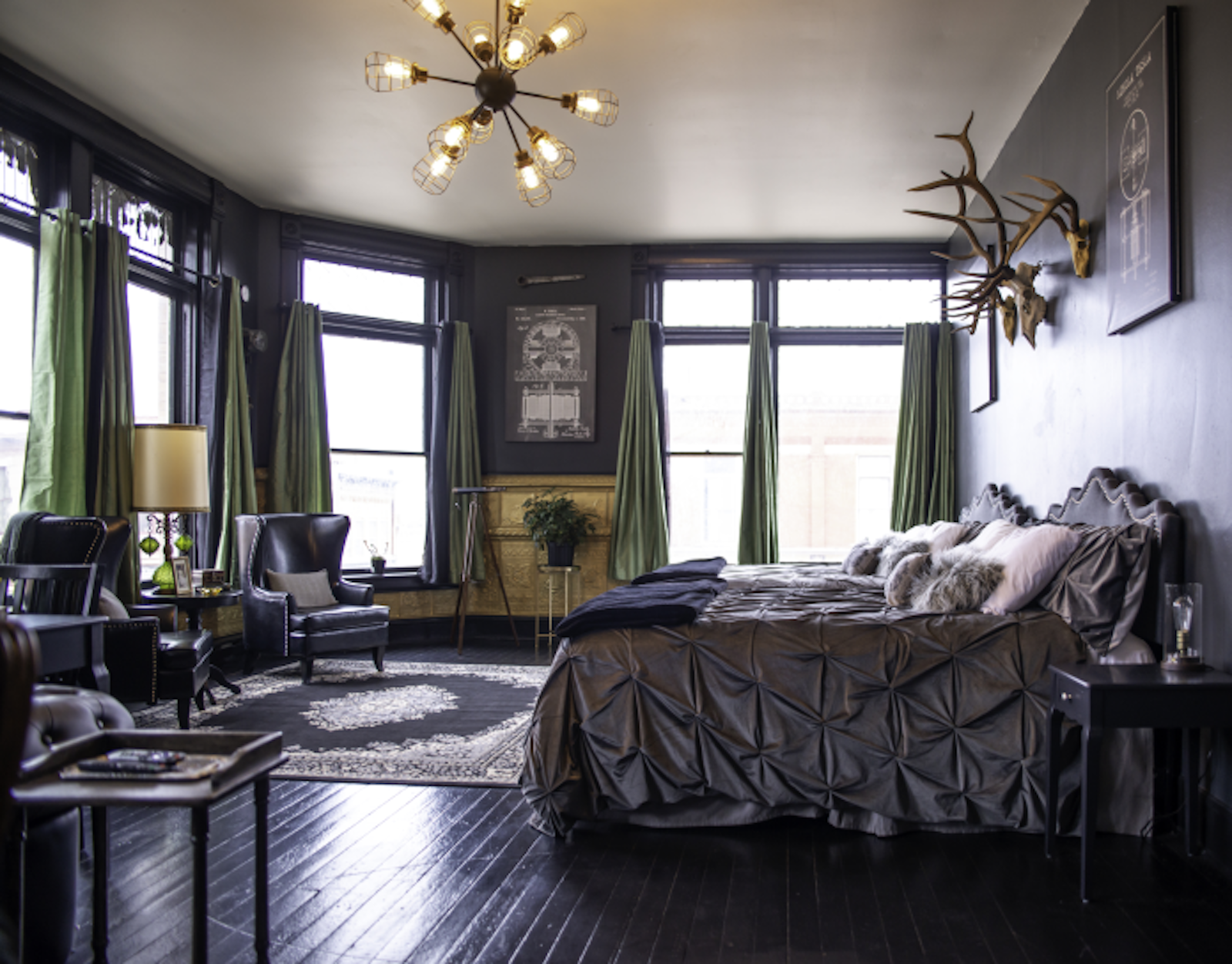 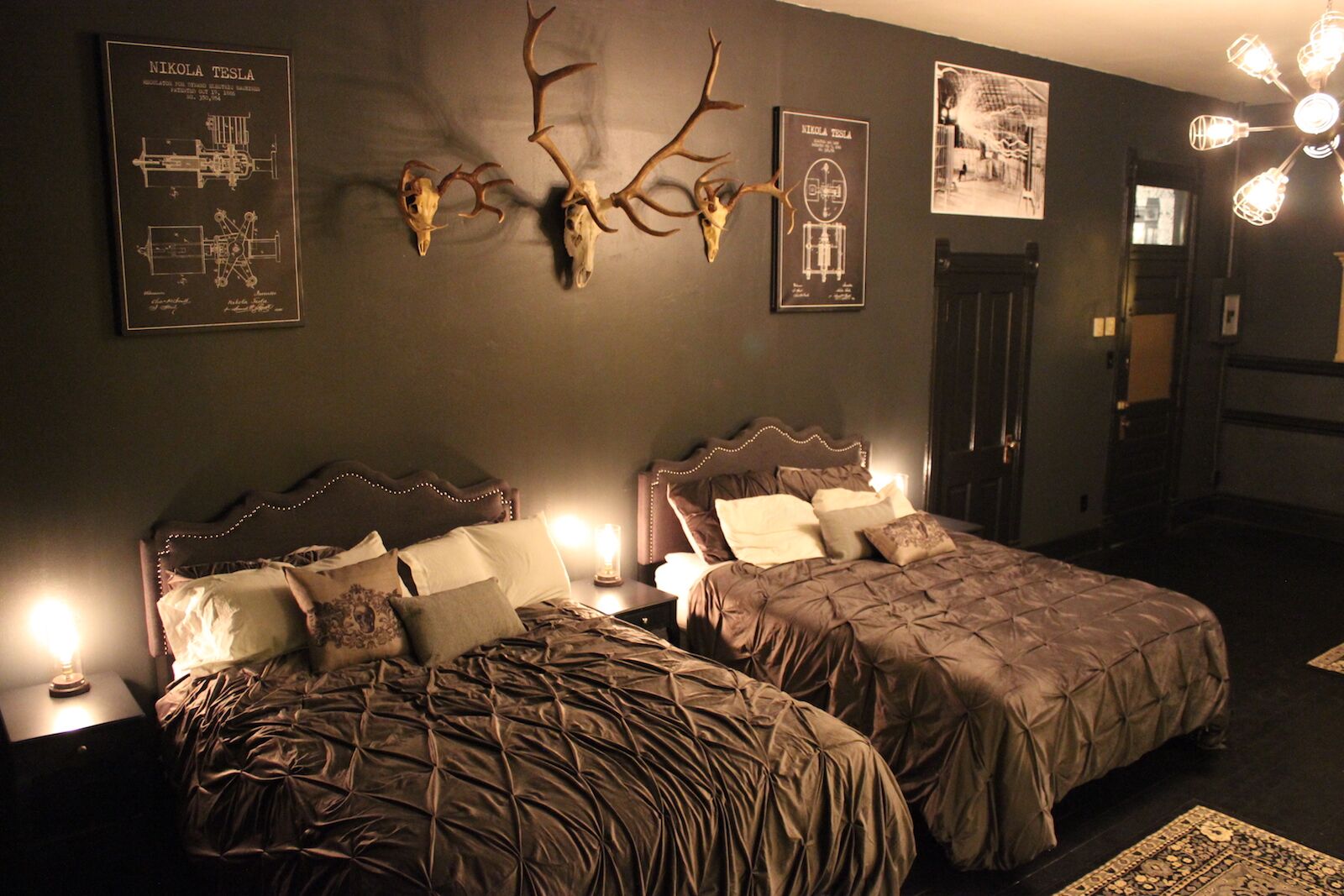 At one time in a mining town like Victor, Colorado, it was probably hard to find a hotel that didn’t serve as a brothel. While much has changed in the roughly 130 years since it was part of one of the largest gold mining areas in the country, one thing that hasn’t changed is the exterior of the Black Monarch Hotel (though it’s no longer a brothel, of course). The hotel advertises that at least one shoot-out happened on-site and that the rooms are probably haunted, so feel free to ask the staff of the state’s most well-known brothel hotels for the whole history — they won’t hesitate to fill you in on all the details they know.

Oh, and did we mention the rooms? They’re all themed after nefarious, infamous, and downright murderous historical figures, ranging from H.H. Holmes (America’s first serial killer) to Jack the Ripper and Lizzie Borden. 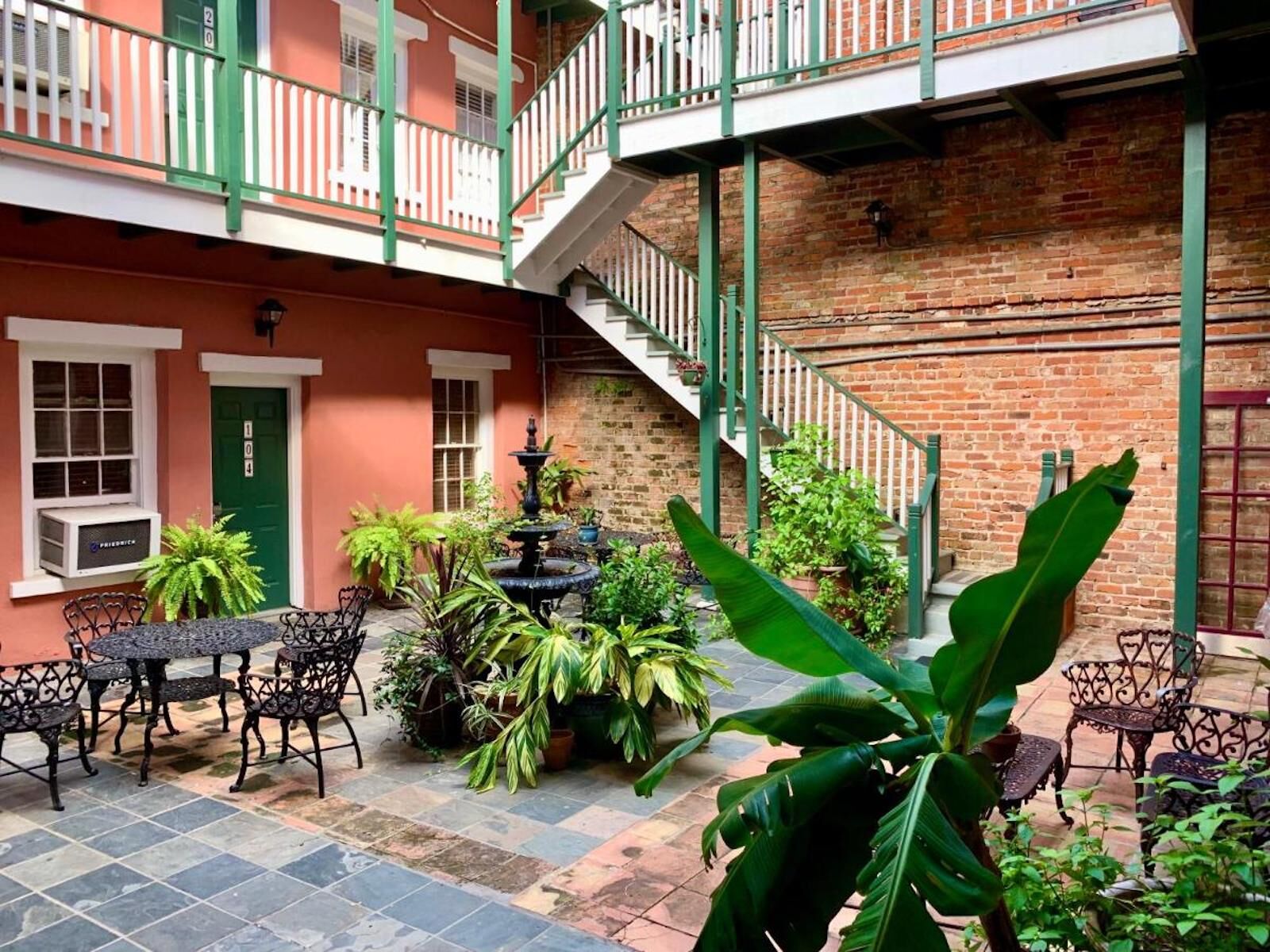 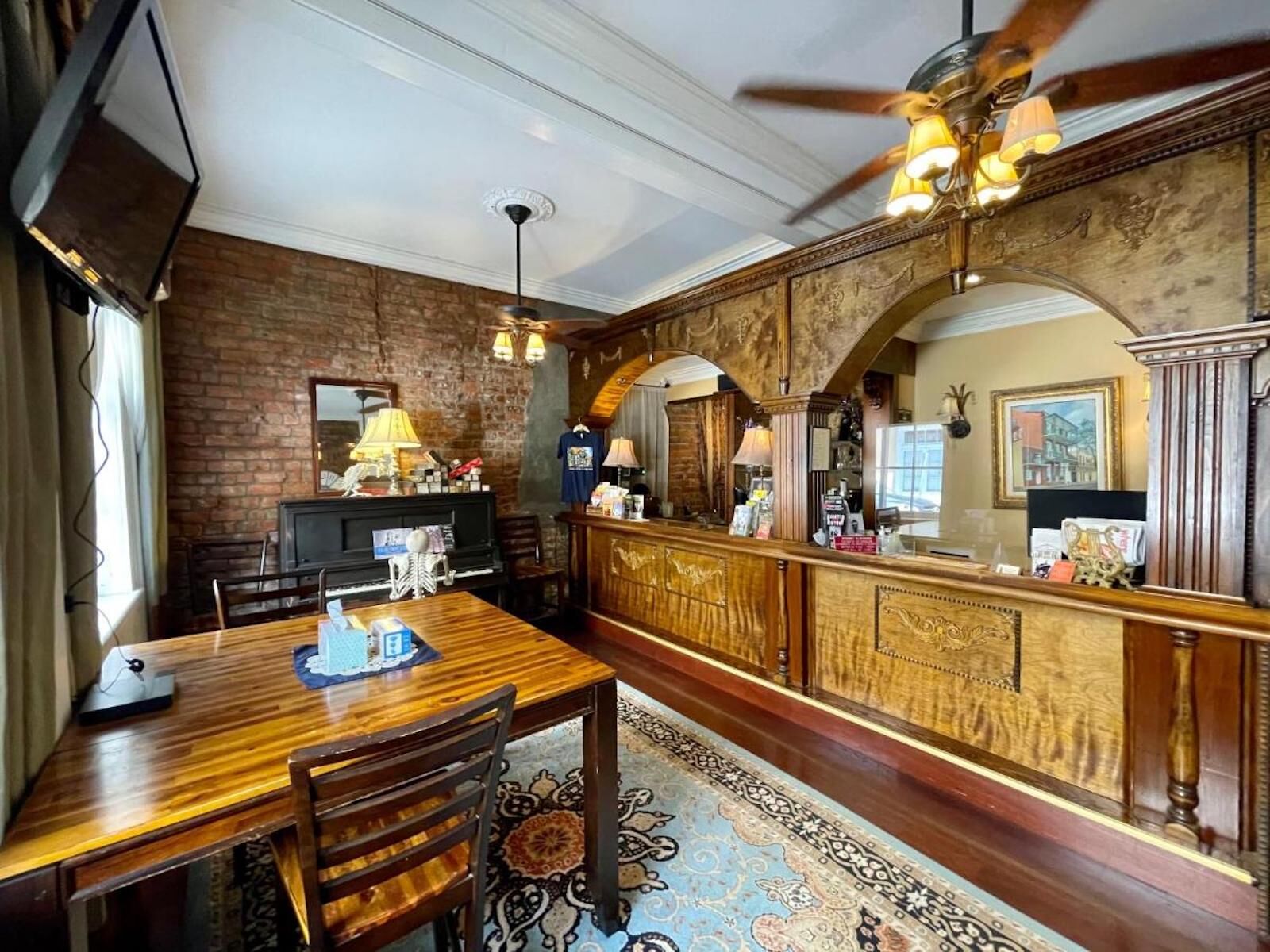 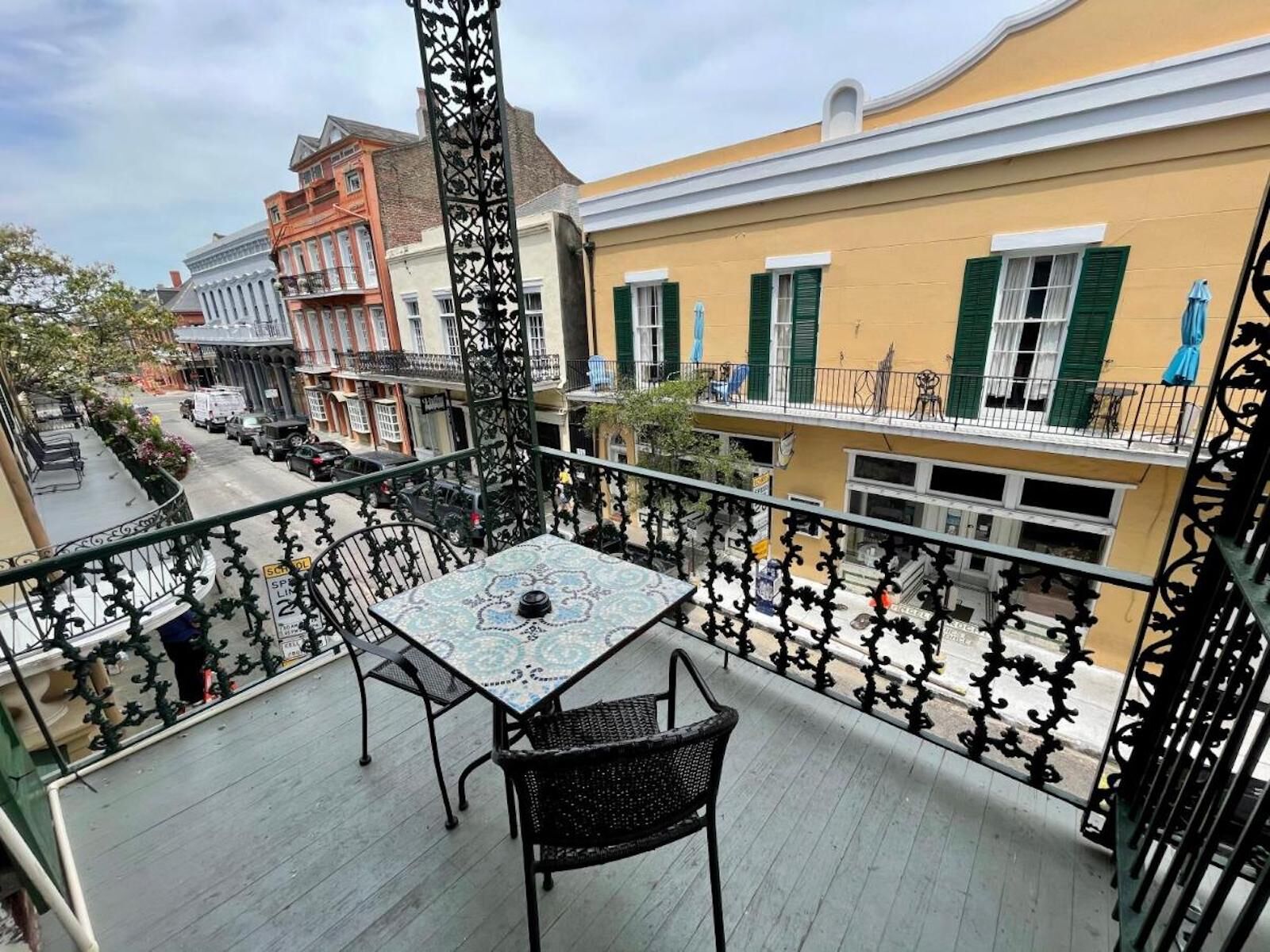 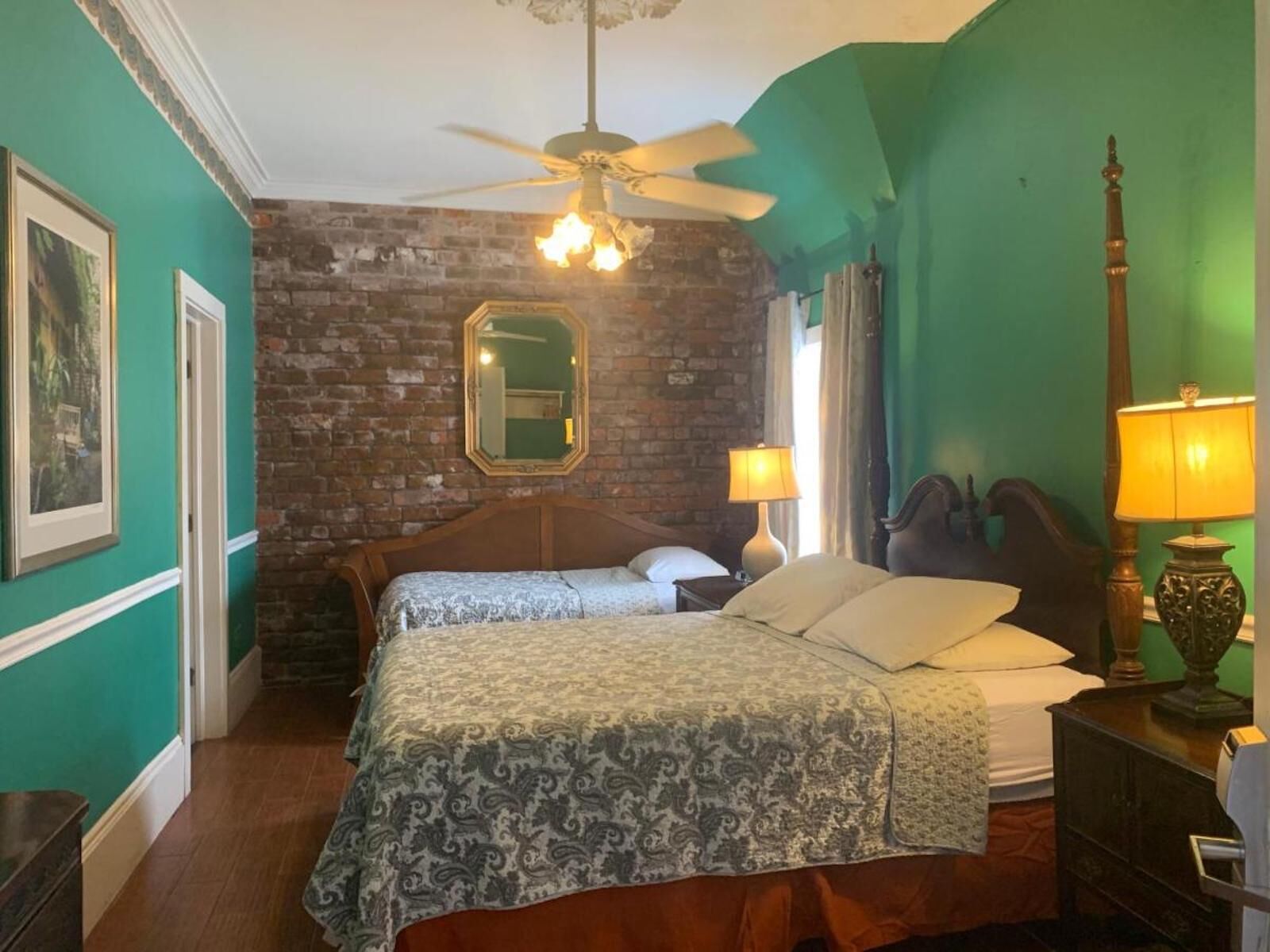 It shouldn’t be a surprise that there would be former brothel hotels in New Orleans, especially considering the annual revelry around New Orleans and the city’s interesting blend of cultures, traditions, and historical figures. The Hotel Villa Convento was built in the French Quarter in the 1830s and has the charming architecture you expect of the neighborhood, albeit with a not-so-charming history. While it was first built as a convent (hence the name), it was sold several times after the Civil War and served as a brother from the post-war recession to just after the turn of the century.

As seems to be the case with many hotels-turned-brothels, the Hotel Villa Convento is supposedly haunted by the ghost of  a madame as well as several other spirits who come and go without identifying themselves. It’s a frequent stop on New Orleans ghost tours. If you’re keen to experience something inexplainable for yourself, book room 209 or 305. Otherwise, choose any of the other rooms, which are a mix of bright and cozy suites and guest rooms. It has a B&B vibe and is quite a nice hotel for the price point, especially given its prime location in the French Quarter. 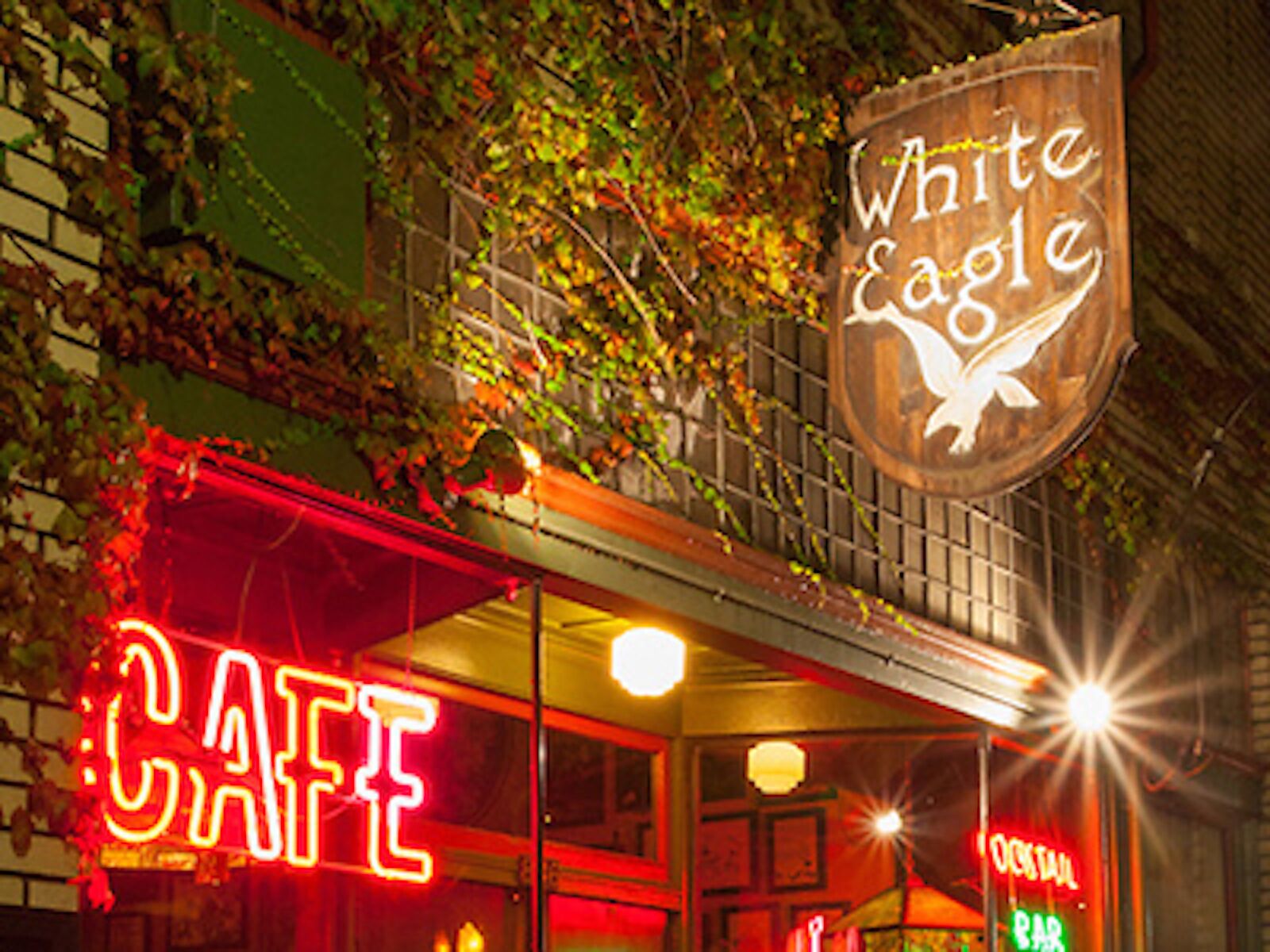 The McMenamins Historic Hotel Group manages the White Eagle Saloon & Hotel, and if you know anything about their other properties, you’ll know not to expect a traditional lodging experience. (Hint: many of their hotels have secret rooms).

The White Eagle Saloon & Hotel advertises itself as “echoing with tales of ghosts, mischief, and mayhem,” which is probably something the building has been doing since day one as it used to be a saloon.

There’s a fascinating in-depth history online, but highlights include the fact that it used to have not just a brothel on the second floor, but also an opium den in the basement. There was at least one murder in the former brothel hotel. And supposedly, the tunnels connecting the hotel to the waterfront were used to smuggle out extremely drunk men, who would wake up the following day to find themselves out to sea, unwillingly signed up to become crew members.

Now, the small hotel is known for its thriving nightlife scene and highly popular concerts, so don’t book a room there if you’re a light sleeper hoping to wake up for an early morning of exploring the city. 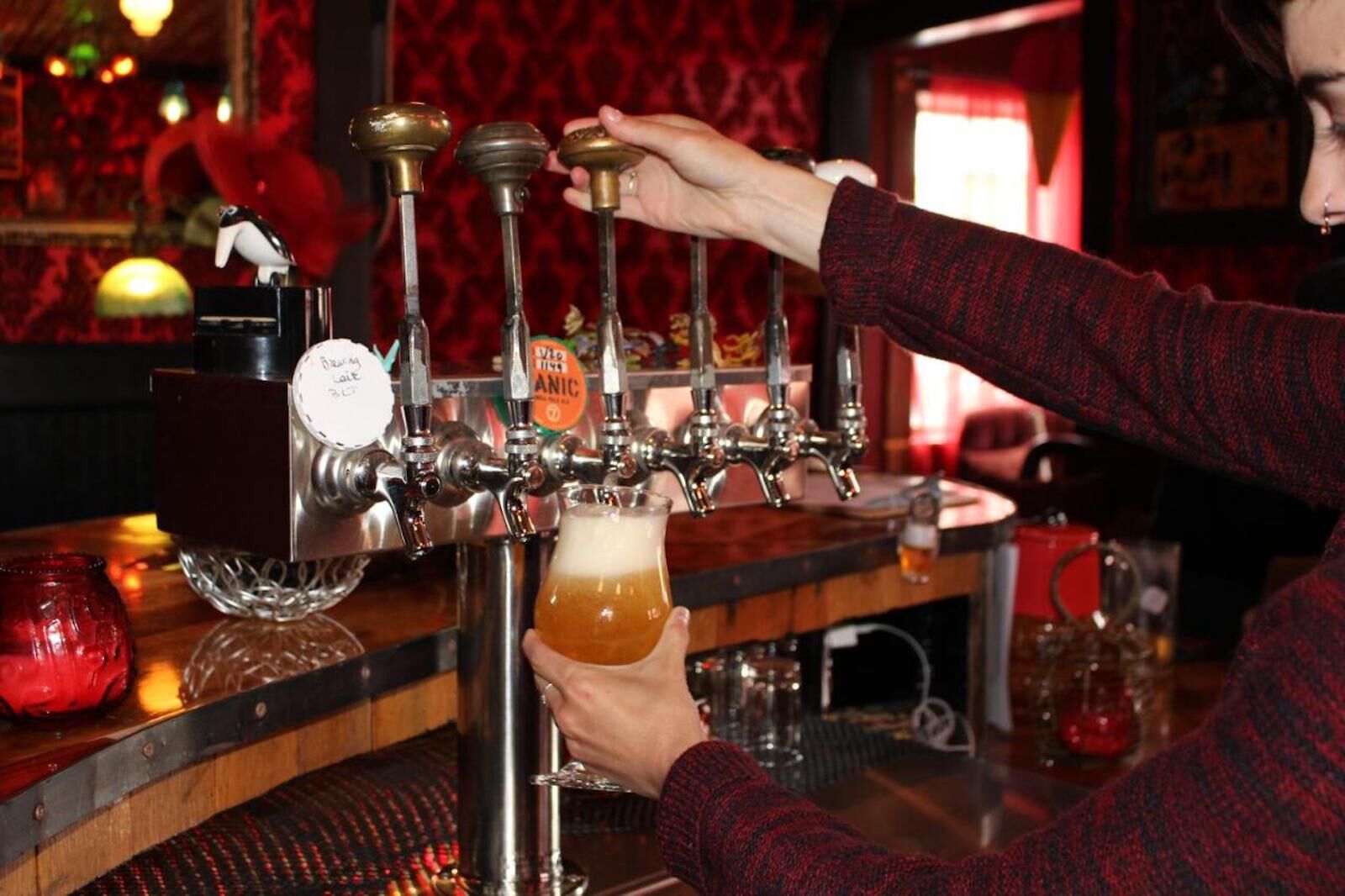 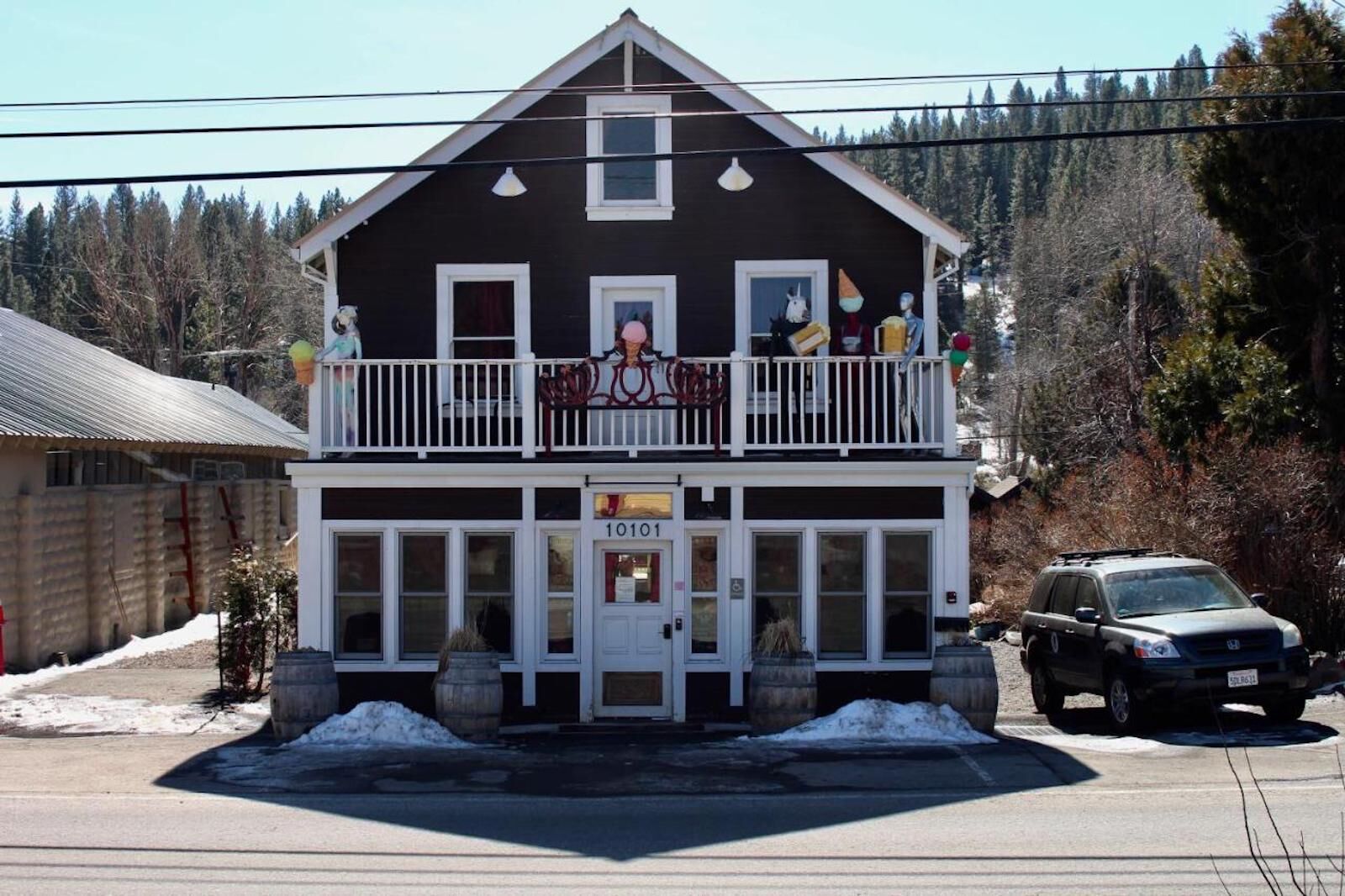 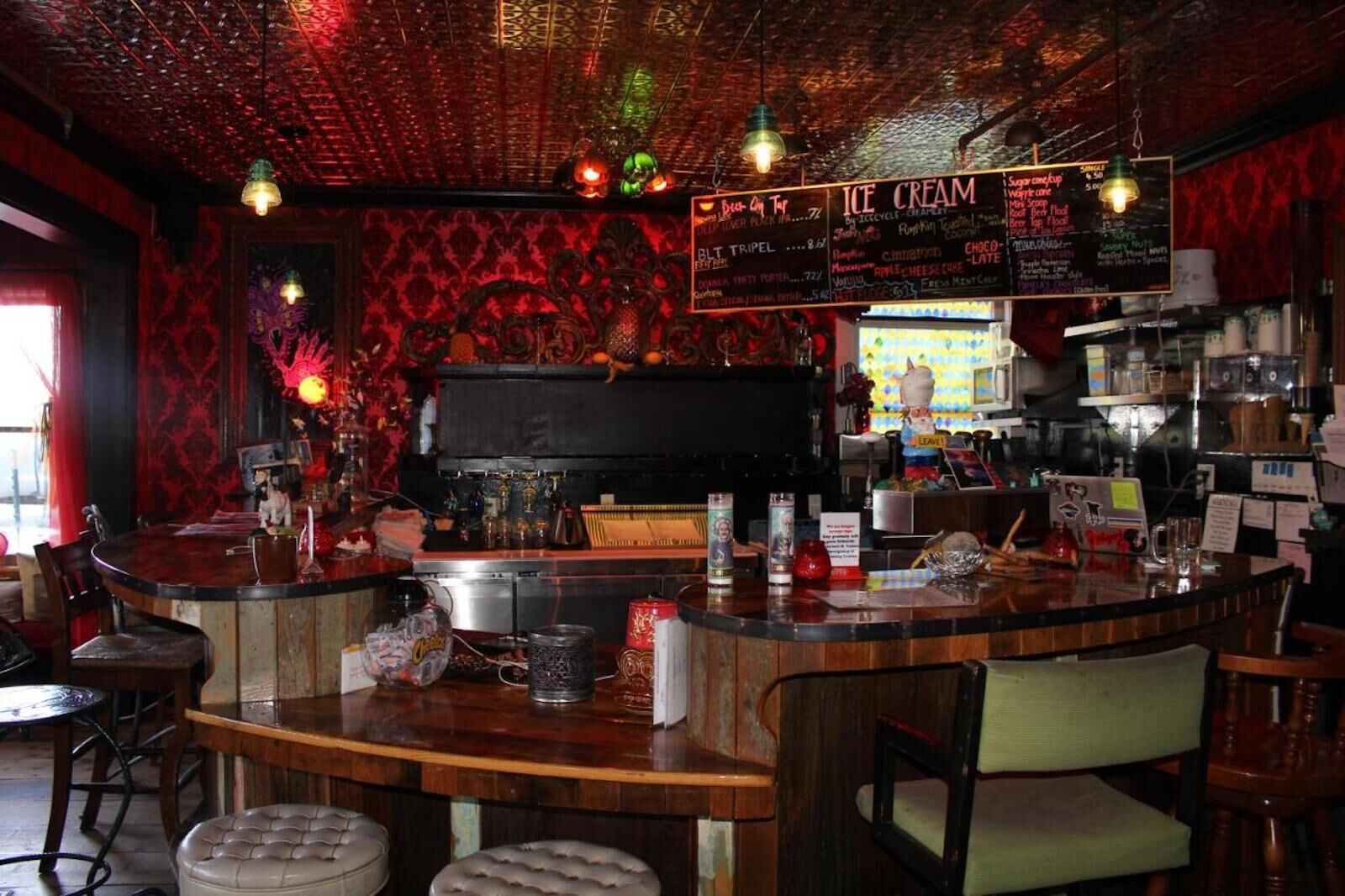 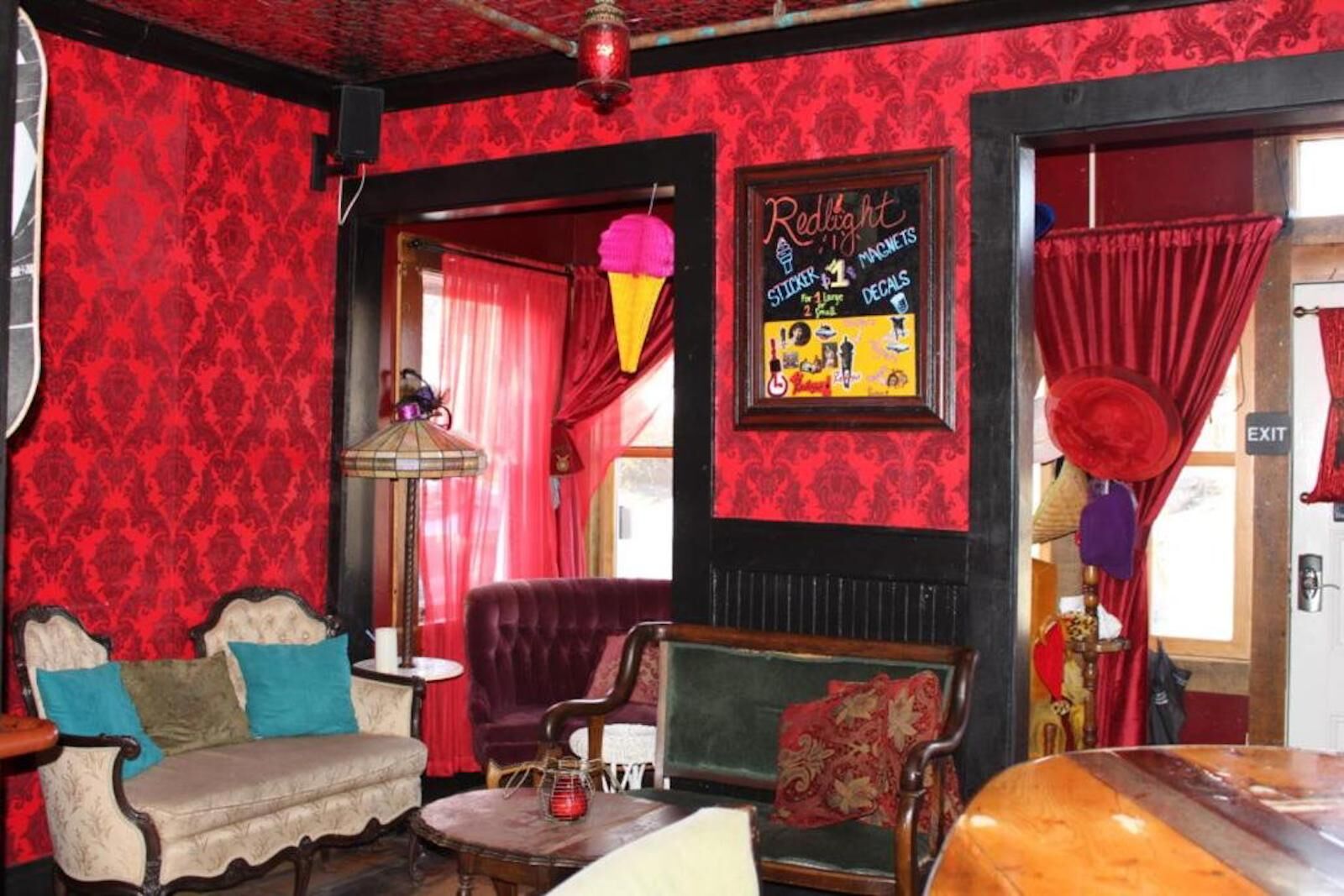 Truckee, California, wasn’t exactly a mining town, at least compared to nearby mountain towns like Virginia City or Bodie. But it was a significant railroad town, moving key products like gold and ore to timber and even ice to San Francisco and markets to the east. That means that many, many workers moving out west came through Truckee — and, owing to the Tahoe area’s seriously high annual snowfall, often got stuck for days or weeks at a time. So, what do you know? A brothel or two popped up.

Today, Truckee’s historic downtown area still has many original buildings, but if you want to sleep in a former brothel, book a room at the aptly-named Truckee Red Light Bunkhouse. It’s not a hotel in the modern sense — more like a large dorm that fully leans into its historical history. Guests can choose from shared bunk rooms, a private room, a private suite, or a separate apartment. While the rooms are basic, the common areas are social and the location is unbeatable if you’re planning to hit the bars and restaurants in the historic part of Truckee.

The Redlight is one of the oldest buildings in Truckee, first built as lodging for rail workers — so as you might imagine, it became a brothel. It was called the Tahoe Saloon and Lodging House during its brothel days. But don’t worry — it got a major revamp and rebuild before becoming the Red Light Bunk Hotel. 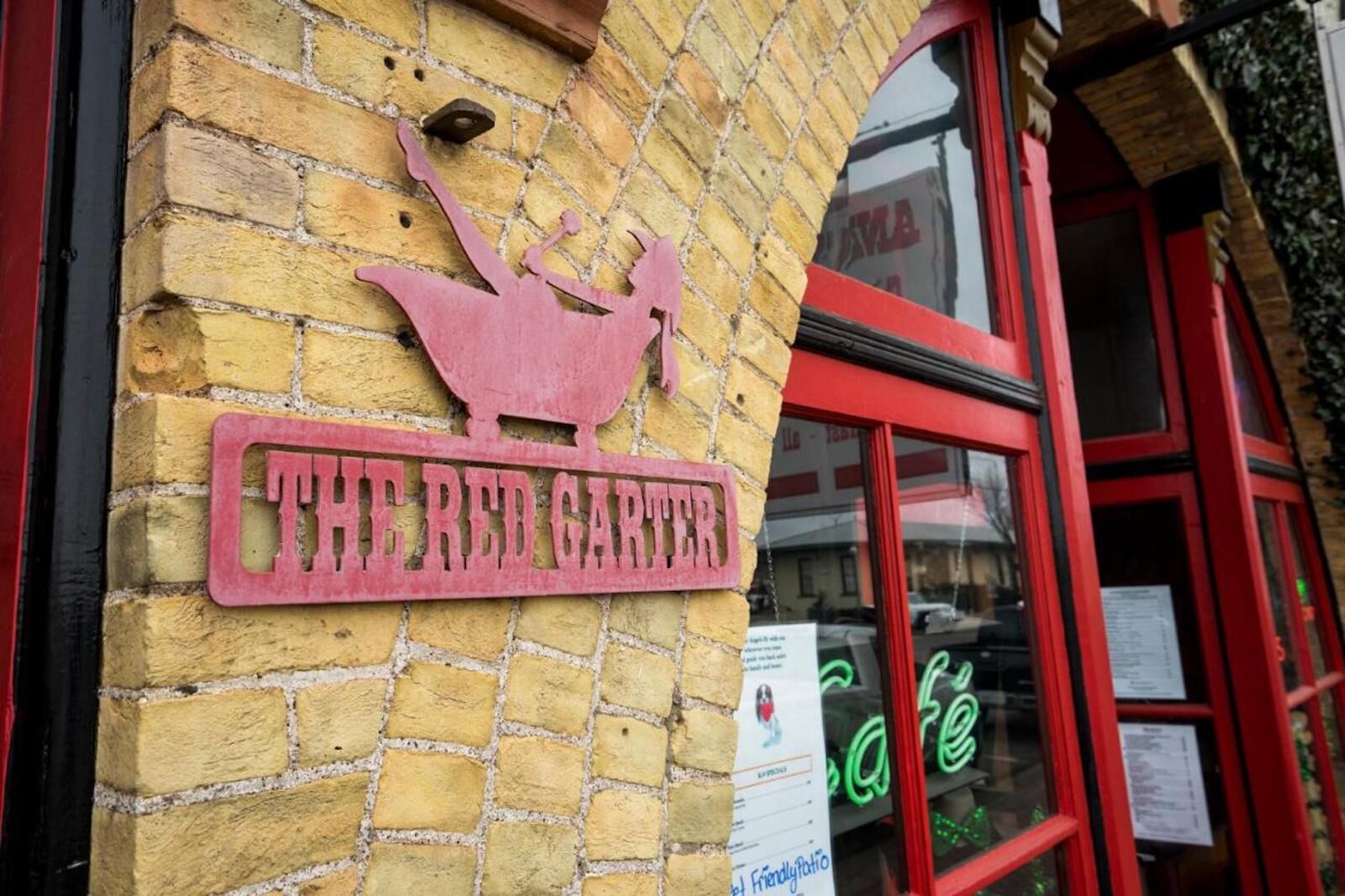 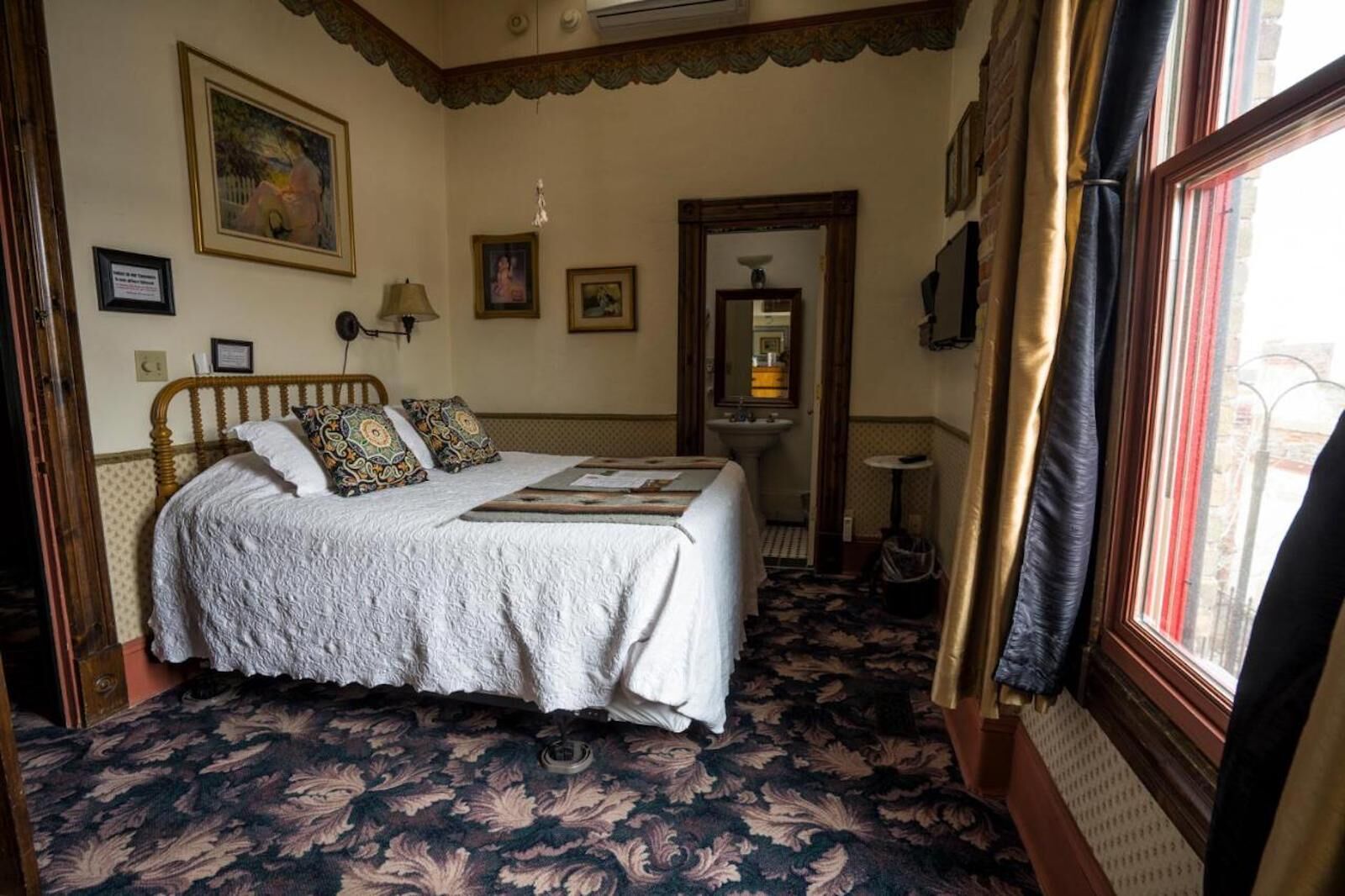 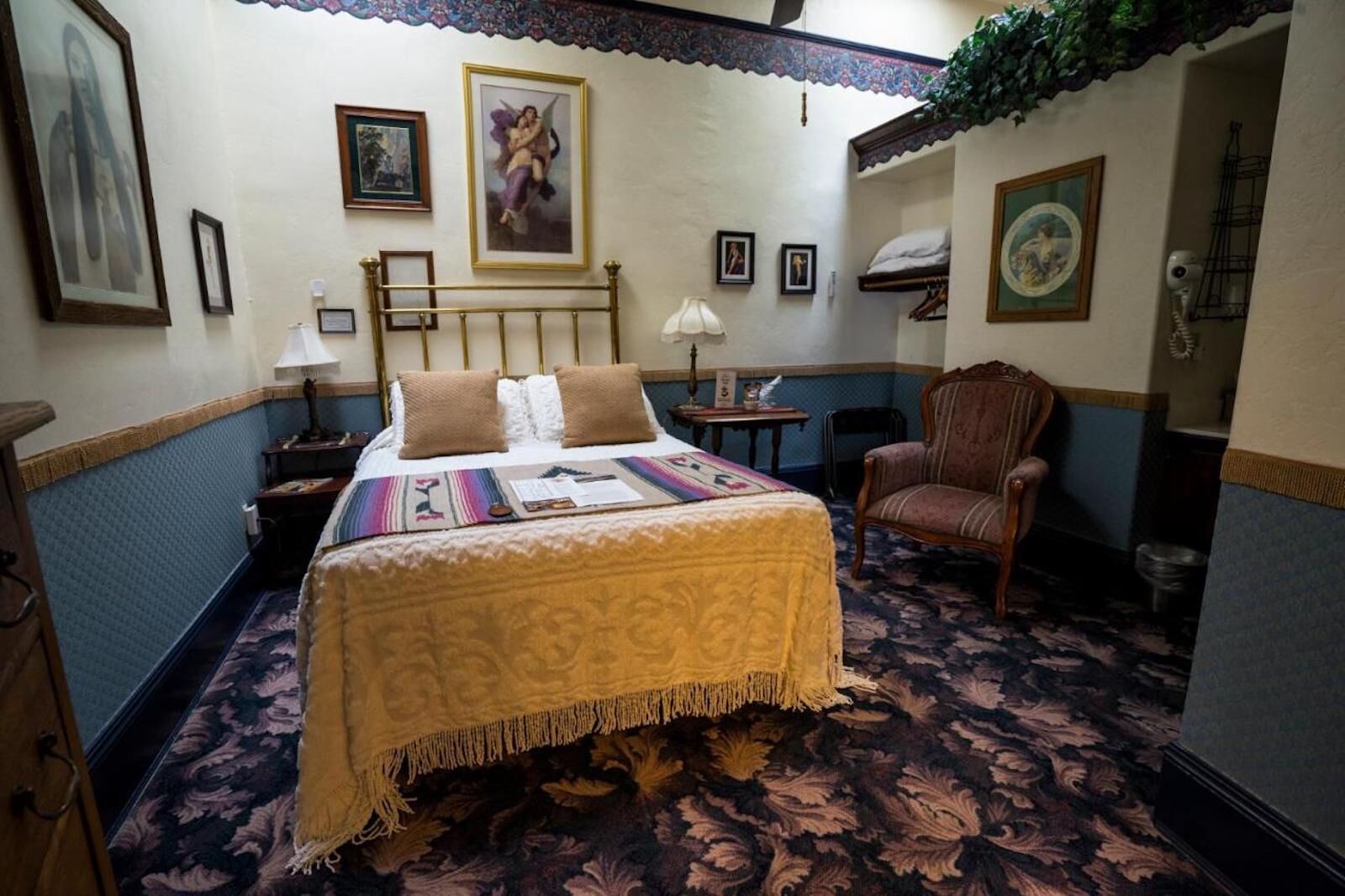 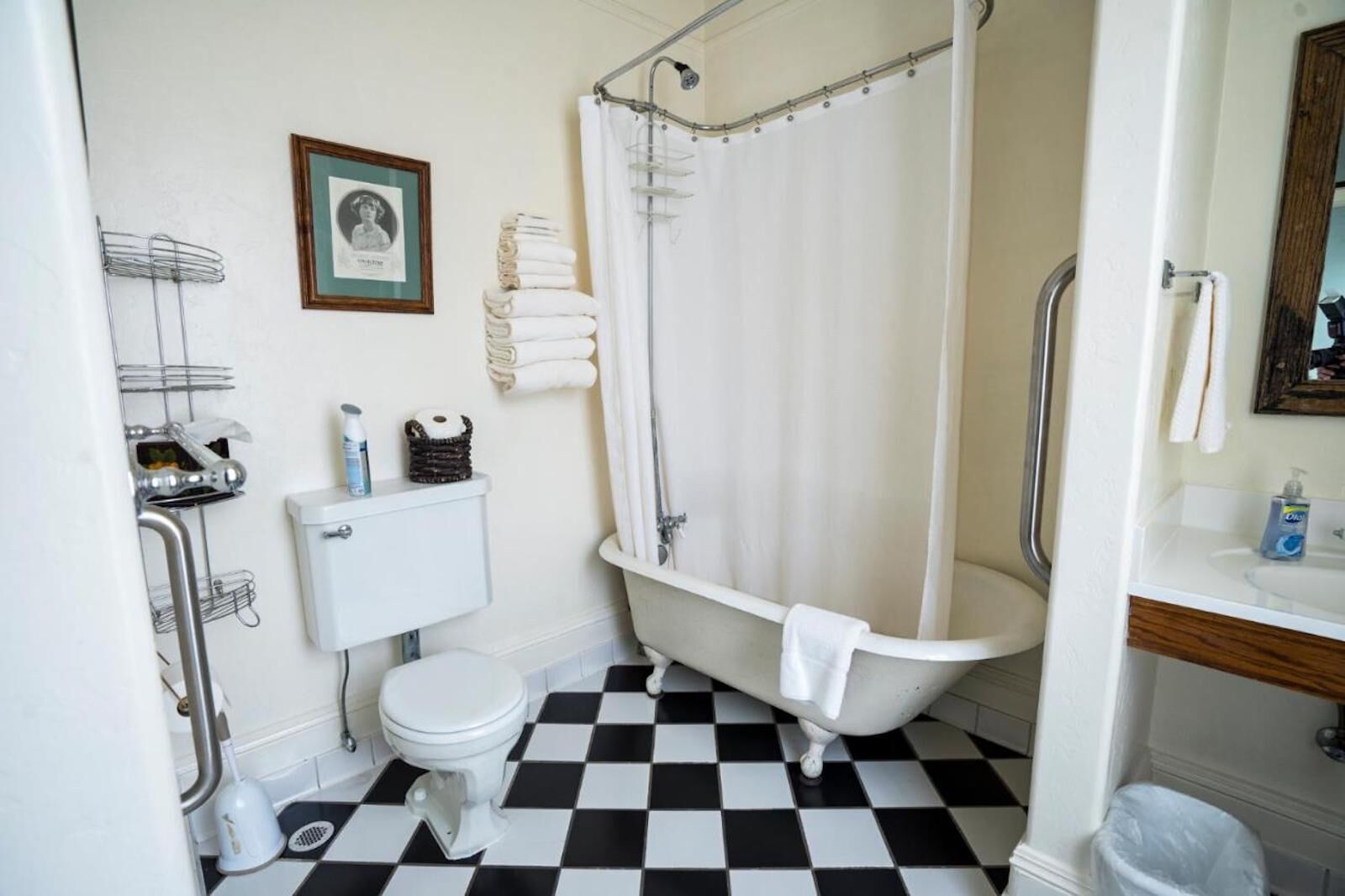 Not to be confused with the Redlight, the Red Garter Inn in Arizona is one of likely many former brothel hotels in Arizona — but sits far away in Williams, near the Grand Canyon. The town of Williams is where guests board the Grand Canyon Railway if they’re entering the park by train.

The Red Garter Inn was built in 1897 directly across from the railroad (a smart business decision when most of your customers are lonely men). It was, if such a thing is possible, a “luxurious” brothel; in fact, the owner referred to it as a bordello, not a brothel.

According to the Red Garter Inn’s website, the building was purposefully designed, with extra soundproofing, large windows from the main bedrooms so the ladies could advertise their services to men on the street, and a social area directly above the saloon to serve as a meeting and waiting room before moving behind closed doors. The brothel operated for many years, even during Prohibition, when the first floor of the Red Garter Inn was a speakeasy and gaming hall.

The current owner bought the hotel in 1979 and updated it to reflect its colorful history. It has only four rooms (with names like “The Best Gal’s Room” and “Big Bertha’s Room”) but they’re all classically styled and very convenient to exploring Williams and the Grand Canyon. 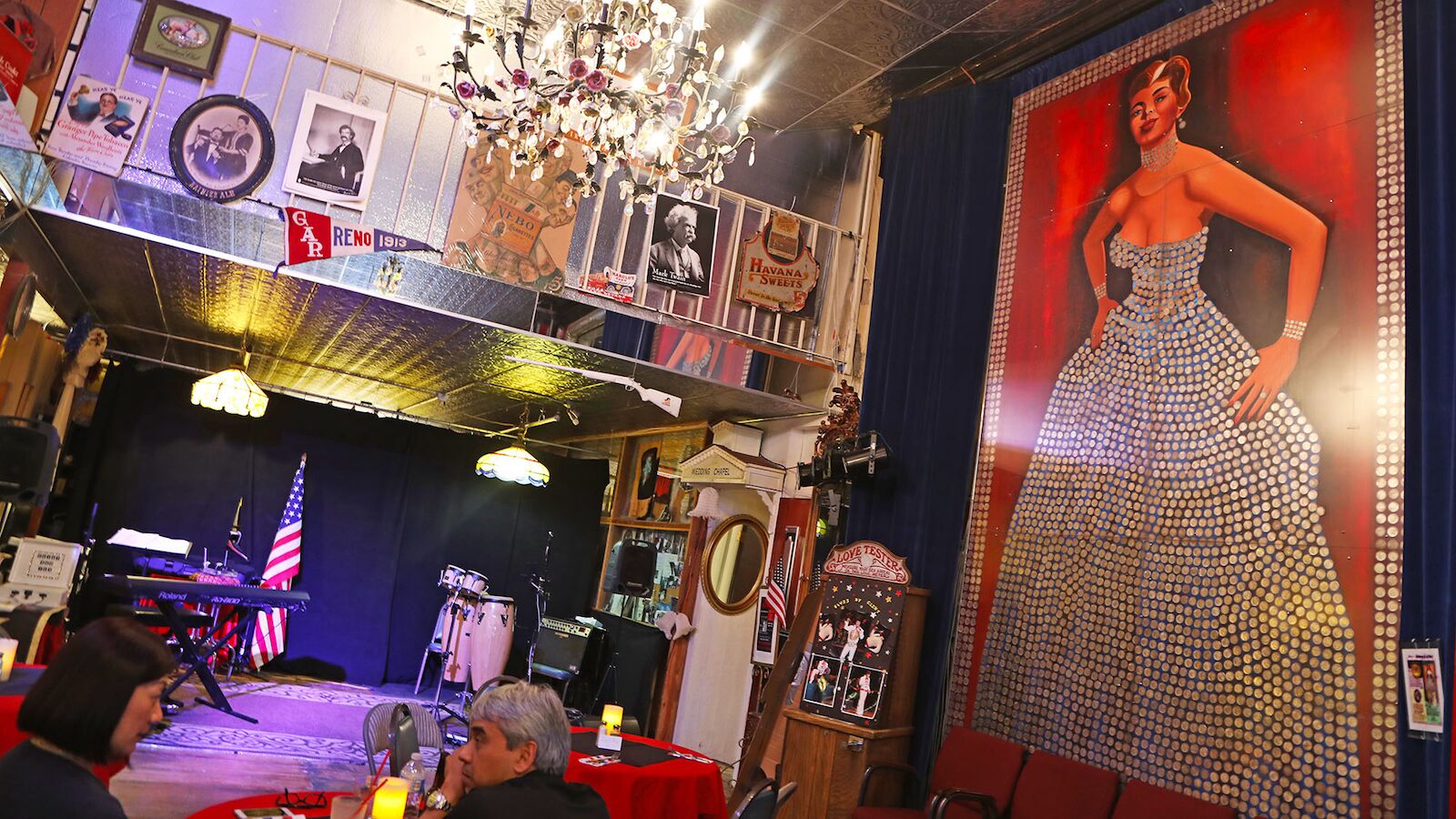 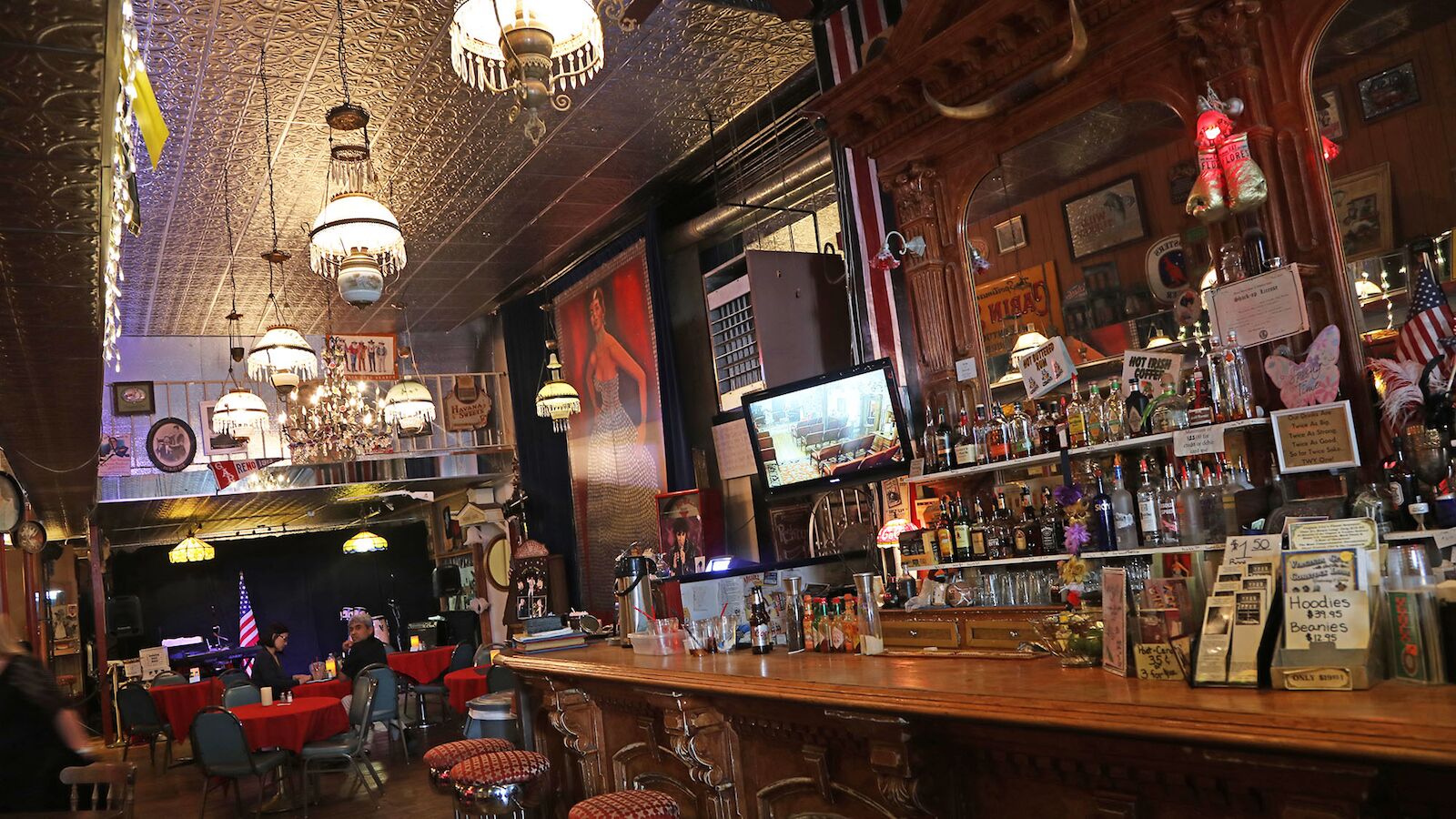 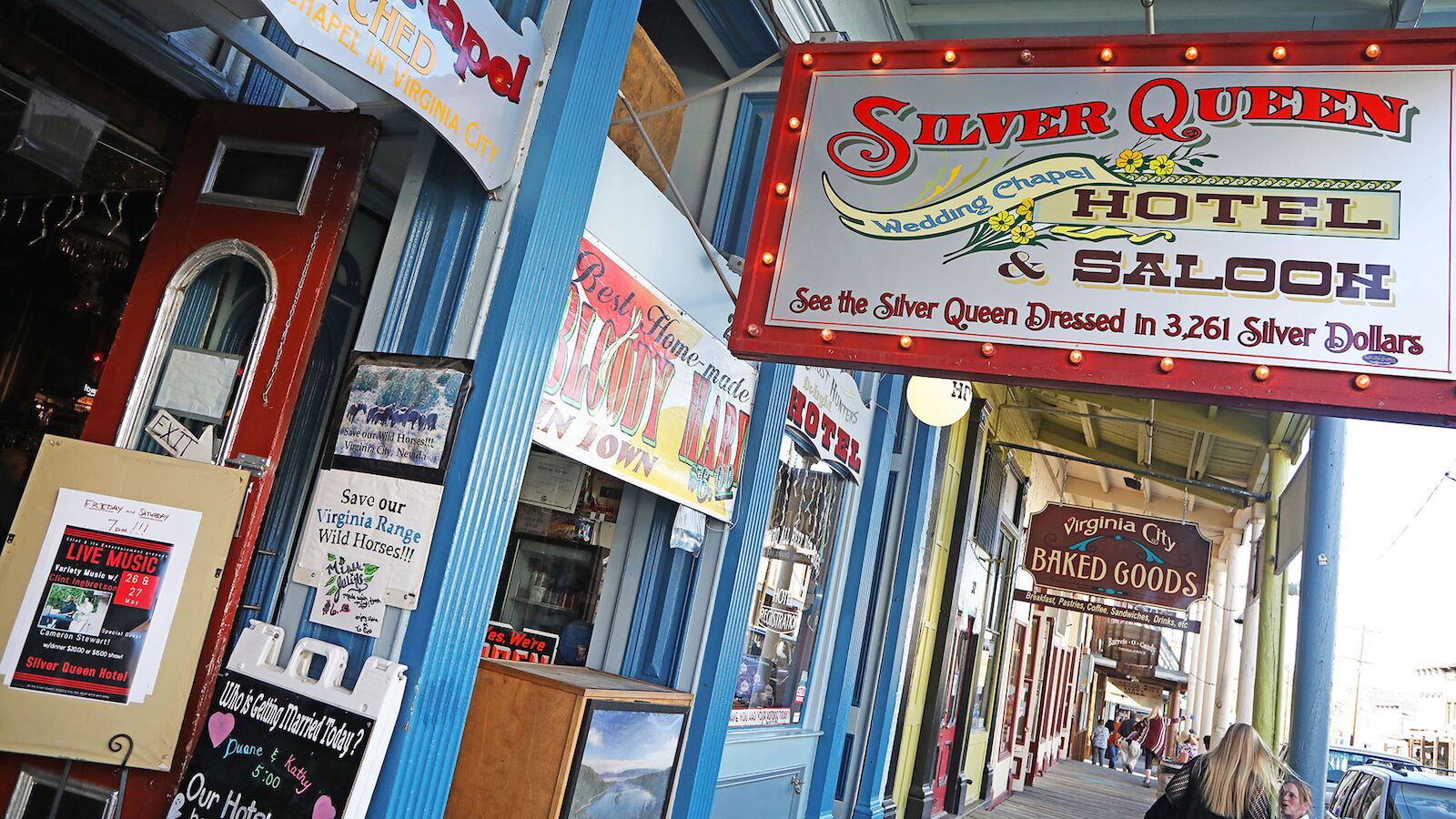 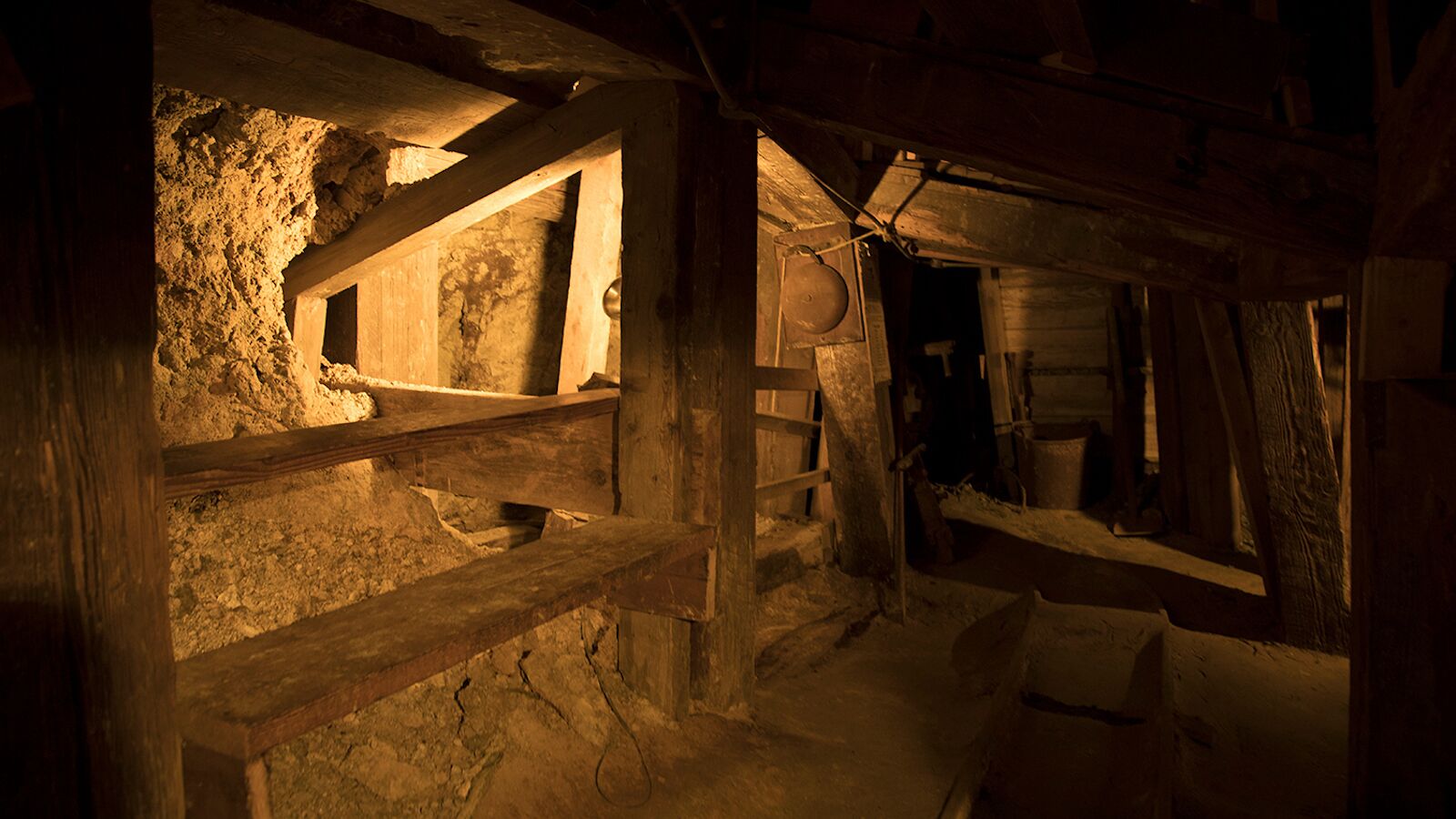 You may not have ever heard of Virginia City, but you’ve certainly heard of Lake Tahoe — which owes much of its development to Virginia City. The small town just a few miles south of Reno, NV, was the site of the famous “Comstock Lode” — the first and one of the largest silver strikes in the United States. It soon developed into a thriving town, which required lumber for heat, buildings, and supporting the multi-level mines. And that lumber came from Lake Tahoe, making the towns around Tahoe popular destinations for men looking to make money out west. The history of Virginia City and Lake Tahoe are very intertwined (and very interesting).

But one of the most interesting things about Virginia City specifically is the Silver Queen Hotel, one of a few likely former brothel hotels in the town. It’s in a prime location next to the town’s historical bars, mines, and shops. It opened in 1876 and the first floor is still a saloon today, complete with the same wooden bar decor you would have found during the town’s boom years. The rest of the hotel looks more or less how it did in the late 1800s.

In terms of the hotel’s brothel history, it’s most famous as being where a madam named Rosie used to conduct her “business affairs,” as the hotel calls them. It’s known that Rosie took her own life in room 11, though she’s said to haunt the entire hotel. In fact, Virginia City and the Silver Quern Hotel have been featured on multiple ghost hunting TV shows.

Like most businesses in Virginia City, staying at the hotel is a bit campy. It’s an awesome place to stay for a night spent strolling the town’s wooden sidewalks, stopping into authentic historical bars, and possibly going on a ghost-hunting tour. While throwing back a budget beer in the saloon, check out the hotel’s eponymous piece of art — a massive portrait of a woman made with more than 3,000 silver dollar coins from the 1880s.

The “book now” button below will take you to the Silver Queen’s website, but they only take reservations over the phone.

Best US Ski Resort Upgrades for 2012