While many people sheltering in place were distracted with their sourdough starters, a smaller contingent of amateur bakers was hard at work on a less glamorous but no less beloved baked good: the flashy and cheerful boxed Funfetti cake. If sourdough is the Grace Kelly of quarantine baking, Funfetti cake is Shirley MacLaine — maybe not quite as elegant, but way more fun.

Funfetti is technically the brainchild of Pillsbury and consists of vanilla cake mix with a burst of color from rainbow sprinkles. Chances are it popped up at birthday parties, or your mom kept a box in the pantry for special occasions. The name alone signifies celebration and good times — not exactly the vibe in the world today, which, between restaurant closures, layoffs, and an escalating death toll is quickly starting to feel like an avalanche of garbage. That constant and immovable sense of dread you feel? Yeah, you’re not the only one.

Cake isn’t a cure-all for *gestures broadly* all this anxiety (see: Tina Fey eating sheet cake), but for people quarantined — whether alone or with their families — it’s been the temporary Band-Aid on a deepening wound. And it’s actually helping, thank you very much.

“Funfetti feels like an instant party in a frivolous and kind of silly way,” Rebecca, a filmmaker living in Rhode Island, tells me. “There’s just something irresistible about the way it seems kind of over the top and childlike. I probably would have gone for Funfetti in regular life, but with the quarantine I felt extra decisive that it was the only solution for [my] baby’s birthday.”

The element of nostalgia is an important one in the Funfetti cake equation. It transports bakers to a pre-pandemic world, one that at least seemed a little less complicated. The innocence of childhood isn’t an easy feeling to recapture, but licking icing flecked with rainbow sprinkles off your plate is certainly one way to get there. And if you have kids, passing down treasured memories of baking cake with your parents makes Funfetti even more appealing. 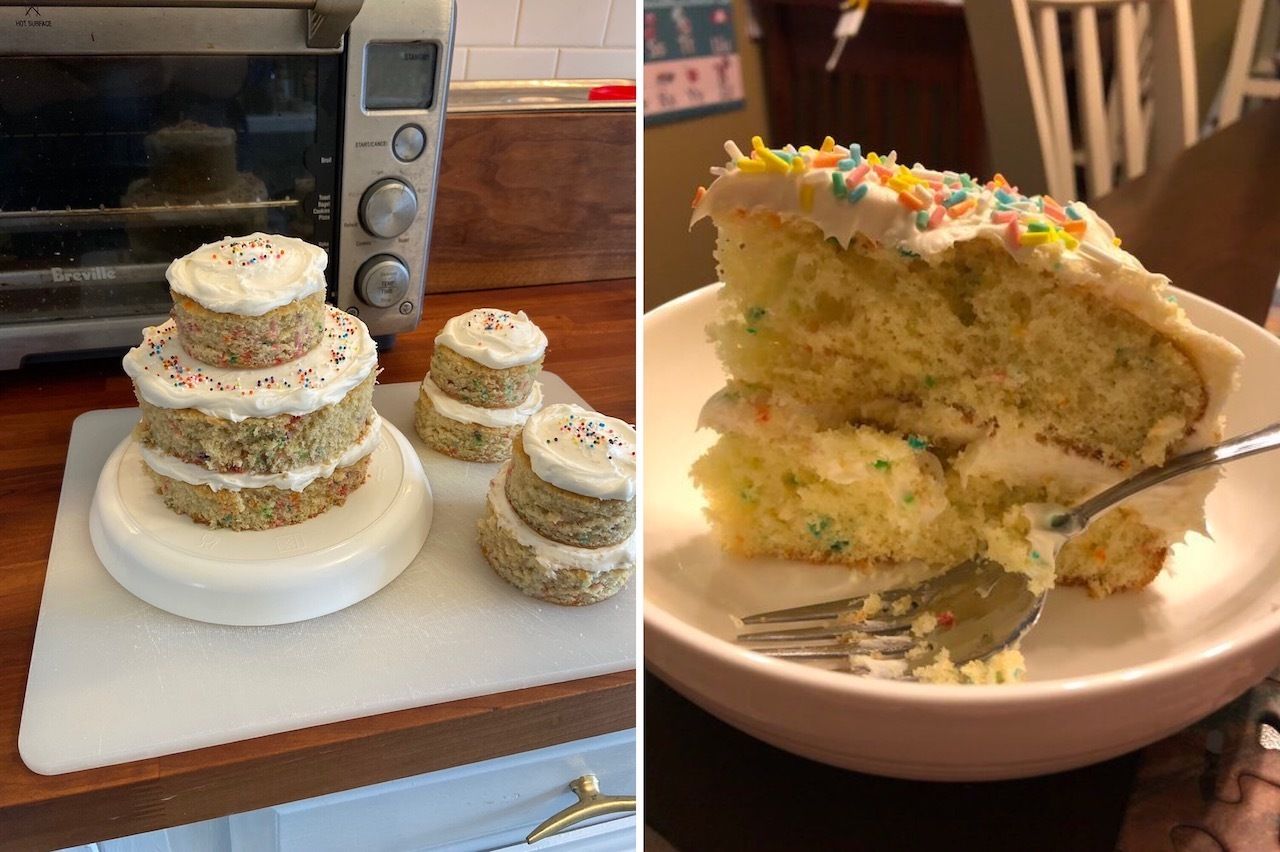 “Funfetti has been my favorite since I was little and there was something oddly comforting about baking it up and having it out like my mom used to when I was younger,” says Alexandra, a teacher in Rochester, New York. “She always made a double layer Funfetti cake with extra frosting. I haven’t made it in a long time, and quarantine seemed like the perfect time because what else is there to do?”

“My kids and I are now on our third cake in as many weeks,” she adds. “We’ve had fun making and frosting them, but the best has been sitting down each night for a show and having a giant slice. It’s a nice reward for all of us.”

Funfetti lives up to its name: It’s fun to bake and fun to eat, and in a time when fun is pretty much canceled everywhere else, it actually makes sense that people are gravitating toward the low-grade boxed version of fun that should do the trick until it’s safe to go on vacation. Yes, you could bake a cake from scratch — and if my Instagram feed is any evidence, many people have — but Funfetti from a box has one other characteristic that has upped its appeal: It’s just so easy to make.

Ease of execution is crucial. Even browsing the headlines is a risky undertaking right now, let alone stepping outside. You have to remember your mask, gloves, and hand sanitizer just to get a cup of coffee at the cafe around the corner, and don’t forget to stay six feet away from everyone else in line or else you could get sick, or get your family sick, or get the barista sick. Point being: Life is high stakes right now. Anything simple and straightforward is a relief.

“[Funfetti] has that childhood connotation of being relatively error-proof, which is really nice right now when so much feels like failure,” Maddox, a writer and comedian who posted their Funfetti journey on Instagram to much fanfare, says. “Failure to be productive to stay in touch, to solve any part of this disaster or say anything profound about it. There’s a lot that feels wrong and I’m not even a sourdough cultist (no offense to bread persons). But I can measure and stir the Funfetti mix and not feel like it’s going to turn out terribly. And if somehow I did screw up, it’s like, a pretend children’s cake.”

The surge in Funfetti’s popularity is another facet of the cooking and baking trends that have emerged during lockdown, but you don’t have to be an expert to partake — you don’t even have to be someone who is interested in taking up baking as a new hobby. The only requirement for baking Funfetti cake is that you have a little time on your hands and a few eggs. And it doesn’t hurt if you could use a cheering up. Cake is a completely appropriate weapon in the battle to disperse the storm clouds hanging above all our heads.

“We all need and deserve joy wherever we can find it right now,” says Shelby, a writer and editor from New Jersey, who baked a Funfetti cake early on in quarantine. “I can’t think of anything better to do that with than a good bit of nostalgia from a Funfetti cake.”