If you’re willing to take a leap of faith, the sky can be your playground.

Though being able to safely fly on columns of rising and falling air may seem a bit crazy, it’s safer than you’d think. All you need is a large, lightweight, and highly maneuverable wing, and you can learn to gain and lose altitude as you soar, swoop and bring out your inner eagle. That’s the beauty of hang gliding. Or is it parasailing? Or paragliding?

Assuming you’re willing to run into the void off a high platform or cliff, you can try hang gliding or paragliding. And an encouraging instructor (who will likely be your tandem partner) is worth their weight in gold if they help you build up the courage to leap. (Okay – maybe worth their weight in feathers.) And parasailing is even easier.

But which is which, between hang gliding vs. parasailing vs. paragliding? And which is better? Well, that’s all down to personal preference since both have pluses and misuses. Here are the differences between the three sports, along with how to pick one and where to travel to try them. 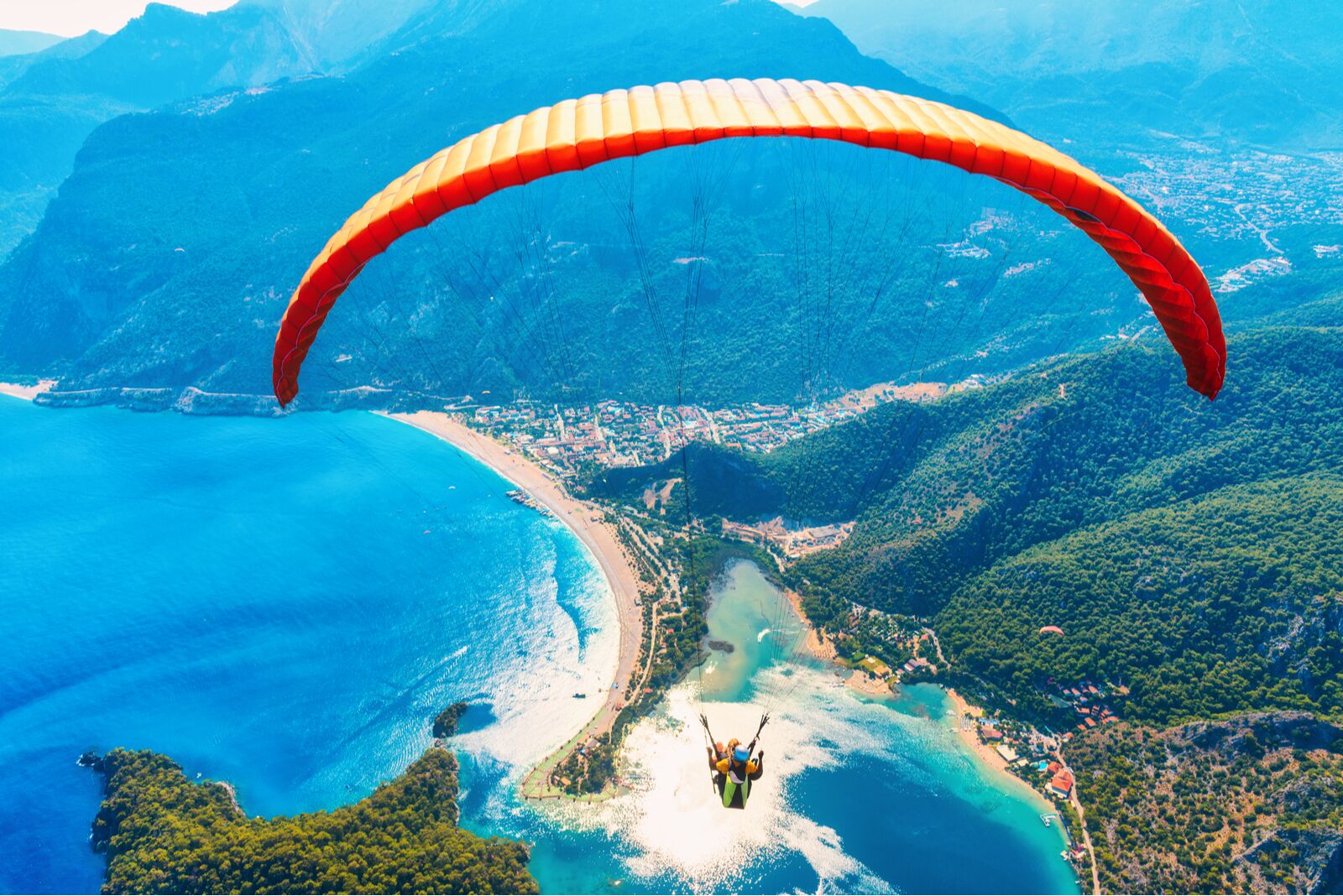 The primary and most noticeable difference between hang gliding vs paragliding is the wing, or sail. In paragliding, the wing looks much like a parachute. It’s flexible and made with a two-layer fabric. A paraglider can fit into a large backpack and weighs between 15 and 30 pounds, give or take.

A hang glider wing and its associated poles weigh around 45 to 55 pounds. That’s because a hang gliding wing is larger and more solid, with a metal frame shaped like a thick arrow. Rather than hanging in a seated harness from parachute cord, as you do with paragliding, hang gliders hold on to a metal bar attached to the frame. And they’re harnessed to the wing as well, of course.

One of the most important differences between hang gliding vs paragliding is how much time you can spend in the air. Ultimately, the goal of flying is to stay aloft as long as possible. You can calculate your time in the air using what’s called the “Glide Ratio,” or how far a glider will travel over the height that it falls. This is usually shown as a ratio like 5:1 or 15:1. 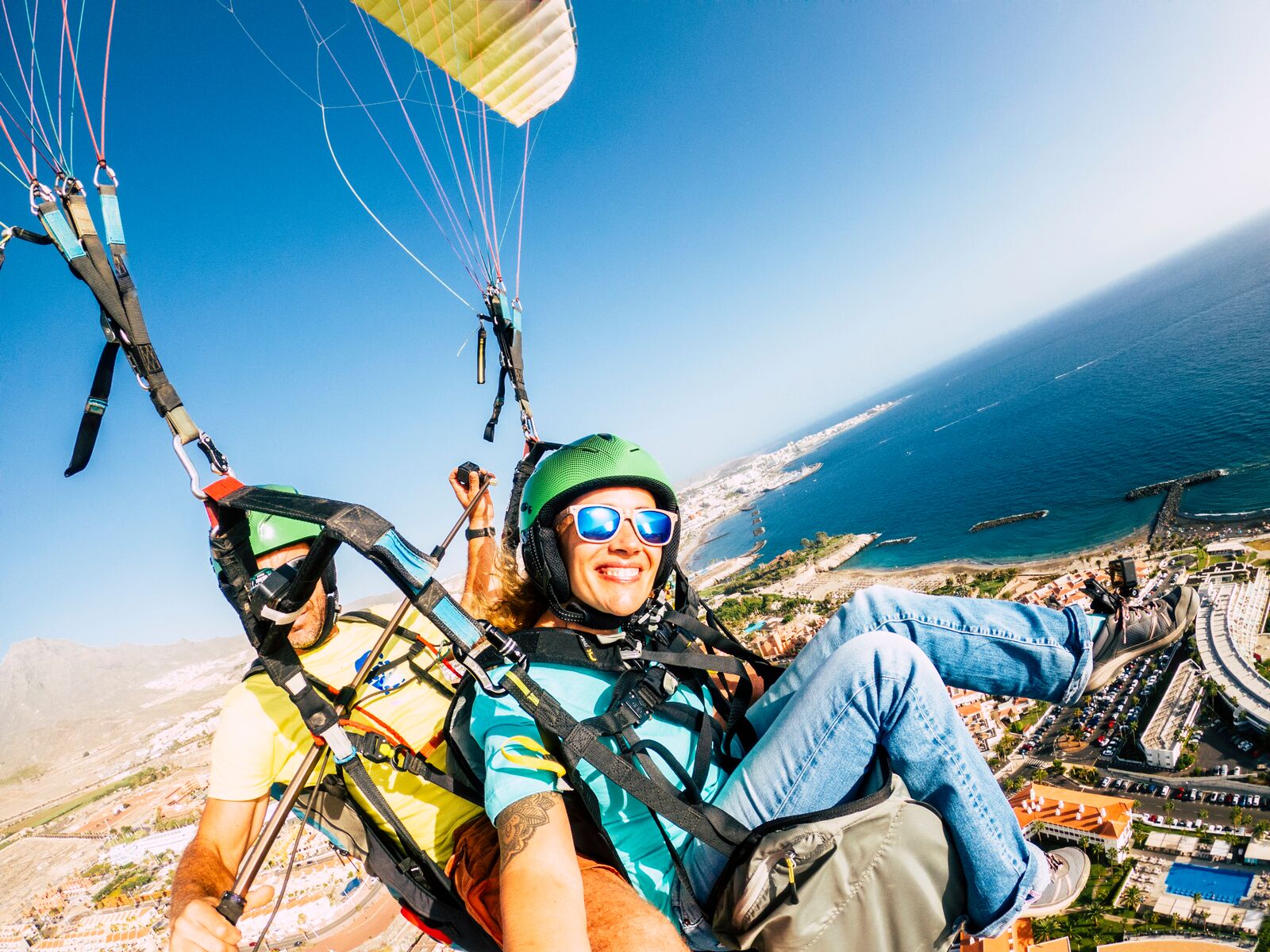 Paragliders sit in a comfortable hanging seat, as opposed to laying prone as with hang gliding. Photo: simona pilolla 2/Shutterstock

For example, a glider with a glide ratio of 8:1 means the glider will move forward eight feet for every one foot it descends in elevation. Hang gliders usually have glide ratios around 15:1 or as high as 20:1, meaning they can generally achieve a longer flight time. This also means hang gliders can fly further from the same starting point.

Hang gliders are also faster. However, paragliders have the edge when turning in a tight radius, usually to take advantage of rising thermals of hot air. And ultimately, that’s what will keep you in the air for as long as possible. They also need a smaller area for takeoff and landing, both of which can happen at lower speeds.

If you want to get all aerobatic and nifty, hang gliders can soar and swoop at speed. With pilots in a prone position close to the wing, any movements to the frame are near-instantaneous. With paragliders, it’s generally a little more laid back (though you’ll find skilled pilots who do stunt flying). And the harness is a more comfortable seat. 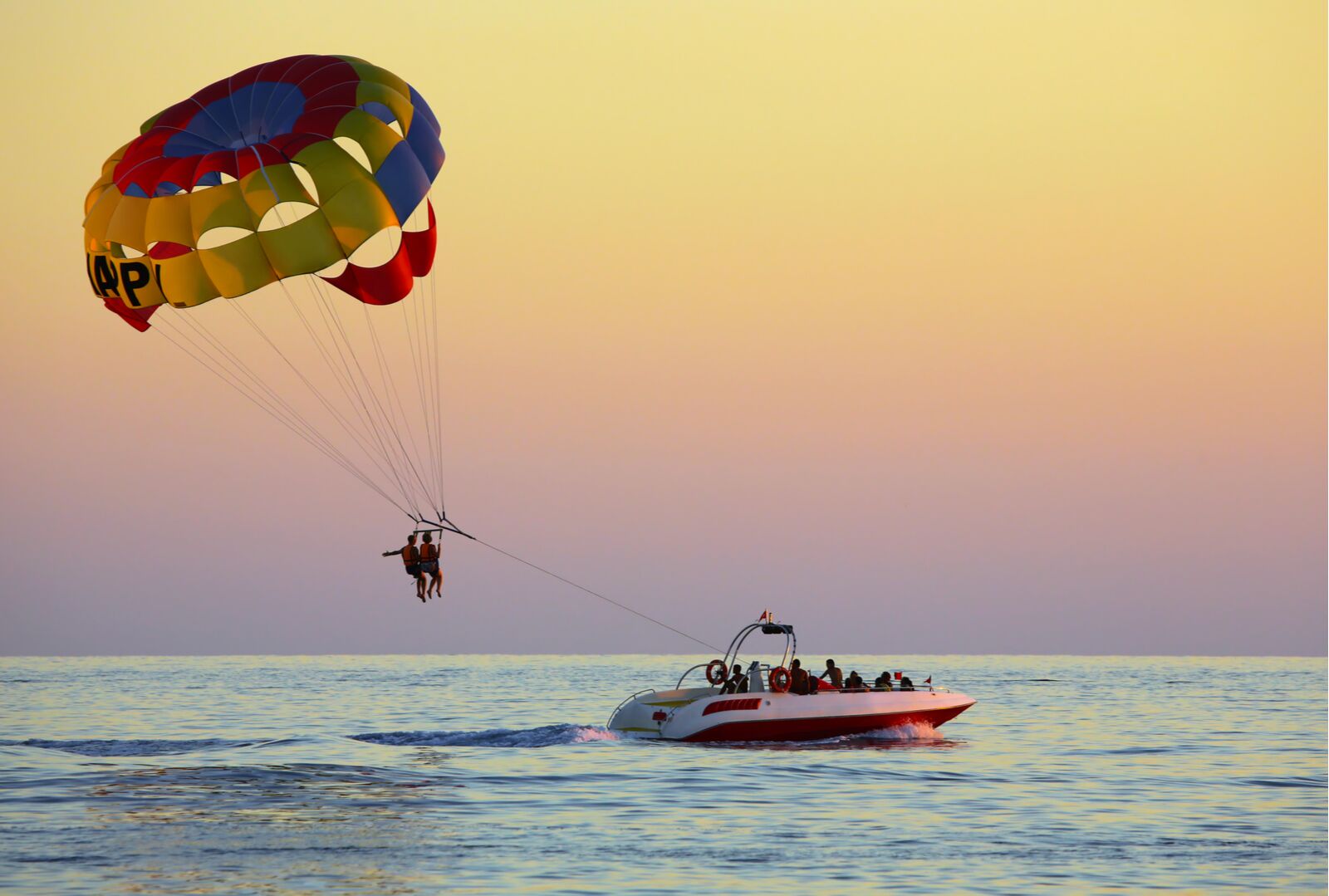 For a truly laid-back and easy flight, it’s hard to beat parasailing. Sure, getting towed behind a boat and being held aloft a scant hundred feet isn’t exactly as adrenaline-inducing as leaping off a cliff, but it’s a great vacation option since it requires no commitment or training. Parasailing is less risky than paragliding or hang gliding and takes less time; most tours keep you in the air for around 15 minutes. And knowing there’s likely to be a cold drink waiting for you as you get winched back to the boat has a certain appeal.

How to decide between hang gliding vs. paragliding 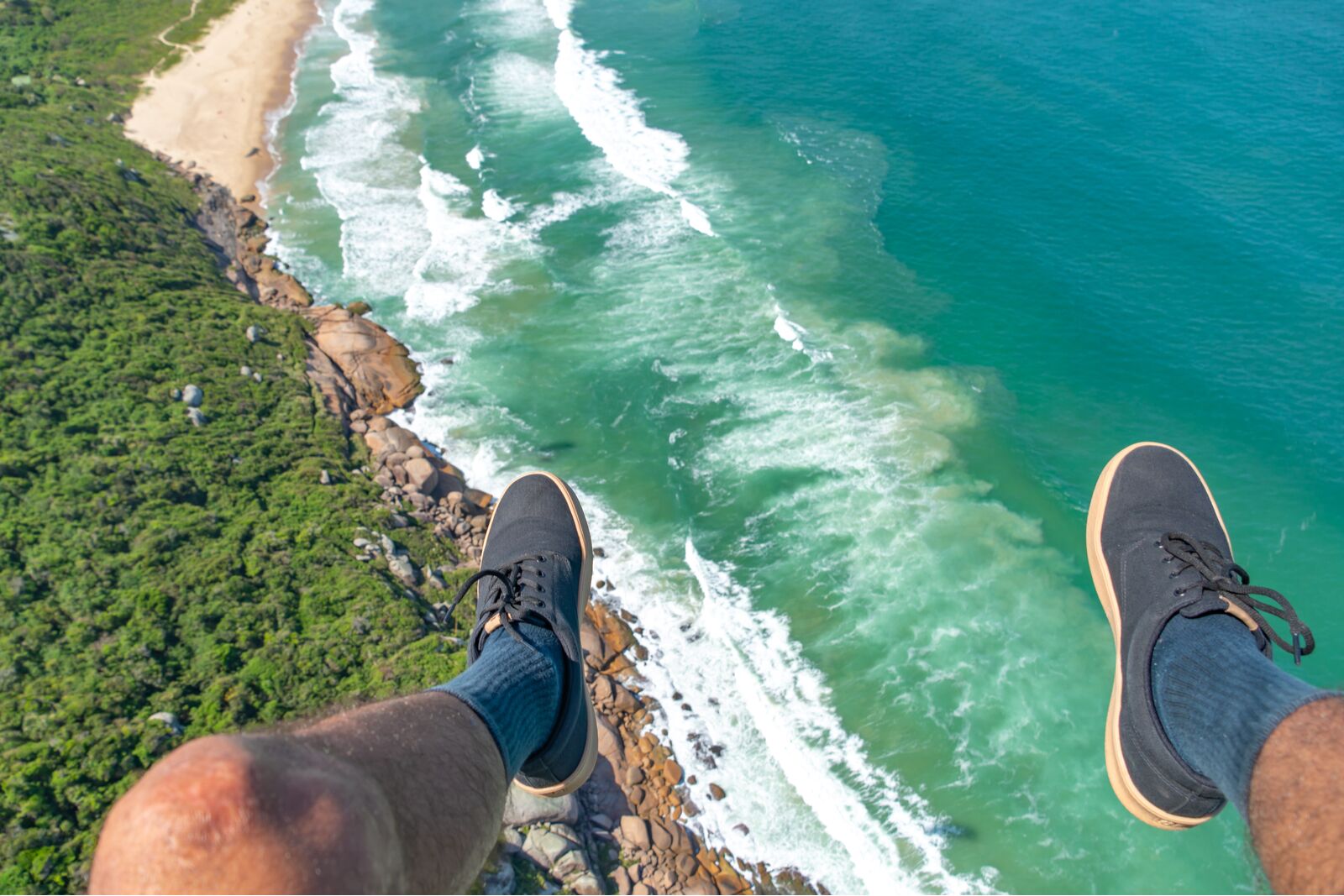 “I’ve done both sports,” says pilot Mike Gustafen, “and both offer different ways to take to the air. Paragliding offers an easier entry for people, while hang gliding is better for the more experienced flier who’s looking for fast thrills.”

That said, Mike gives the overall nod to paragliding. “I paraglide most of the time because the gear is easier to transport and you can land in smaller areas,” he says. “Plus, being able to have a backup parachute on every flight is a safety bonus, too.”

In general, both will cost roughly the same for a quick experience while traveling. Expect to pay anywhere from $150-$300 for a 30-minute paraglide or hang gliding tour while you travel, depending on where you are. But if you’re thinking about buying your own gear and getting into the sport more seriously, hang gliding is more expensive. 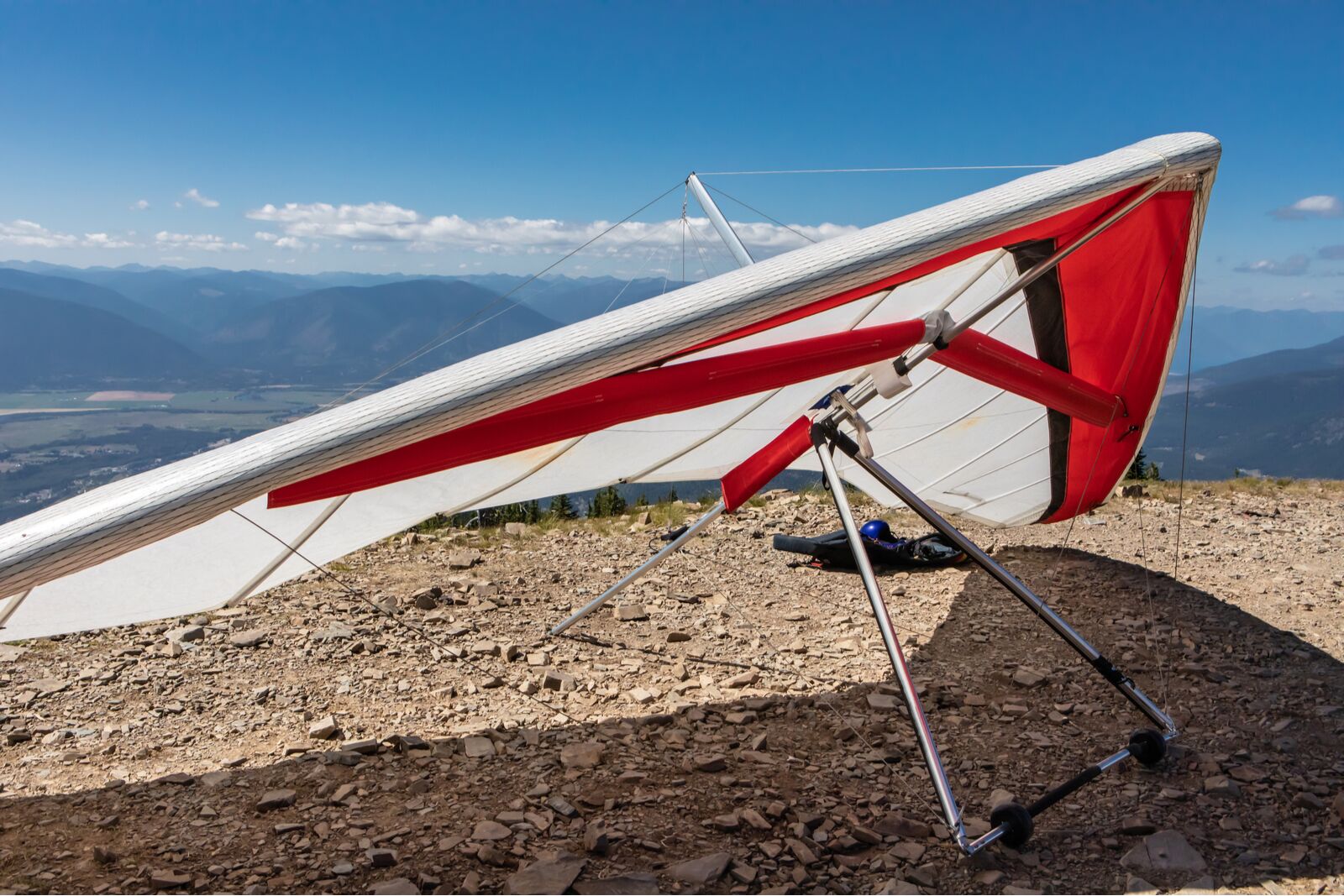 The bottom line is that both are fun, and if you’re just trying it out on vacation, getting into the air and soaring is the most important part. If you’re tight on time or just want to get a few fun photos, consider parasailing. Most beach resorts either offer parasailing in-house or can recommend a local operator, and you can go from beach chair to back again in under an hour.

Where to try hang gliding, paragliding, and parasailing in the US

The US has more than 60 hang gliding and paragliding clubs sanctioned by the U.S. Hang Gliding and Paragliding Association, so there’s no shortage of places to try either sport.

Where to go in the US 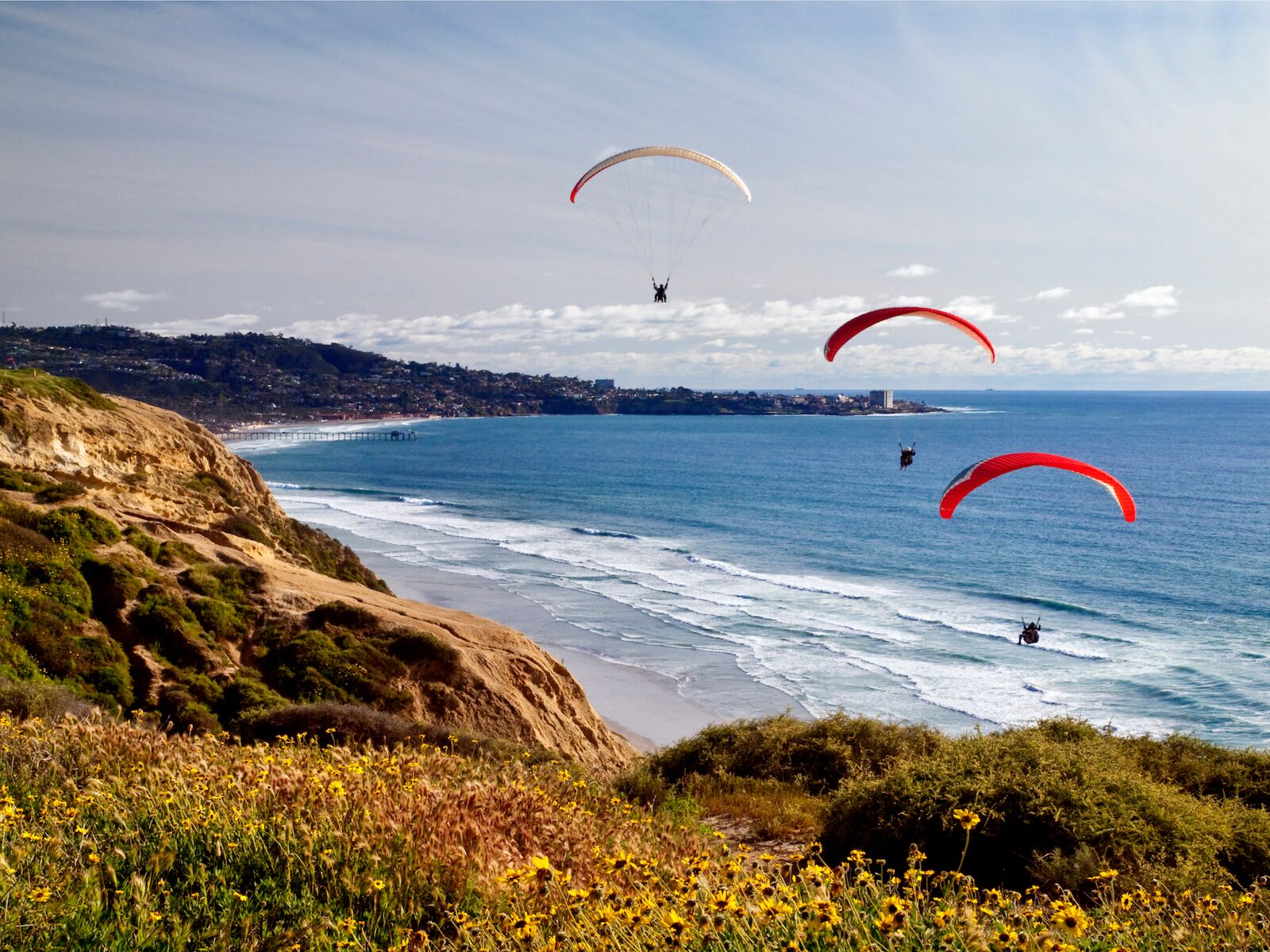 In California, head to Torrey Pines State Park in La Jolla. The park has high bluffs that make it easy to get airborne over the Pacific Ocean (and over some very pricey real estate) and beach landings are easy and fun. It’s actually one of the oldest flight areas in America as it was the location of Charles Lindbergh’s maiden flight. The Torrey Pines Gliderport offers paragliding lessons starting under $200.

Even further west is Polipoli Flight Park, a popular launch site for paragliders in Hawaii. Maui’s Haleakalā Volcano dominates the island’s topography. And the summit, at 10,023 above sea level, is awe-inspiring from the air. The area around Polipoli is on the side of the island that gets less wine, so it’s flyable around 330 days a year. Go with Paraglide Maui (paragliding) or head across the island to launch from Hana Airport with Hang Gliding Maui. 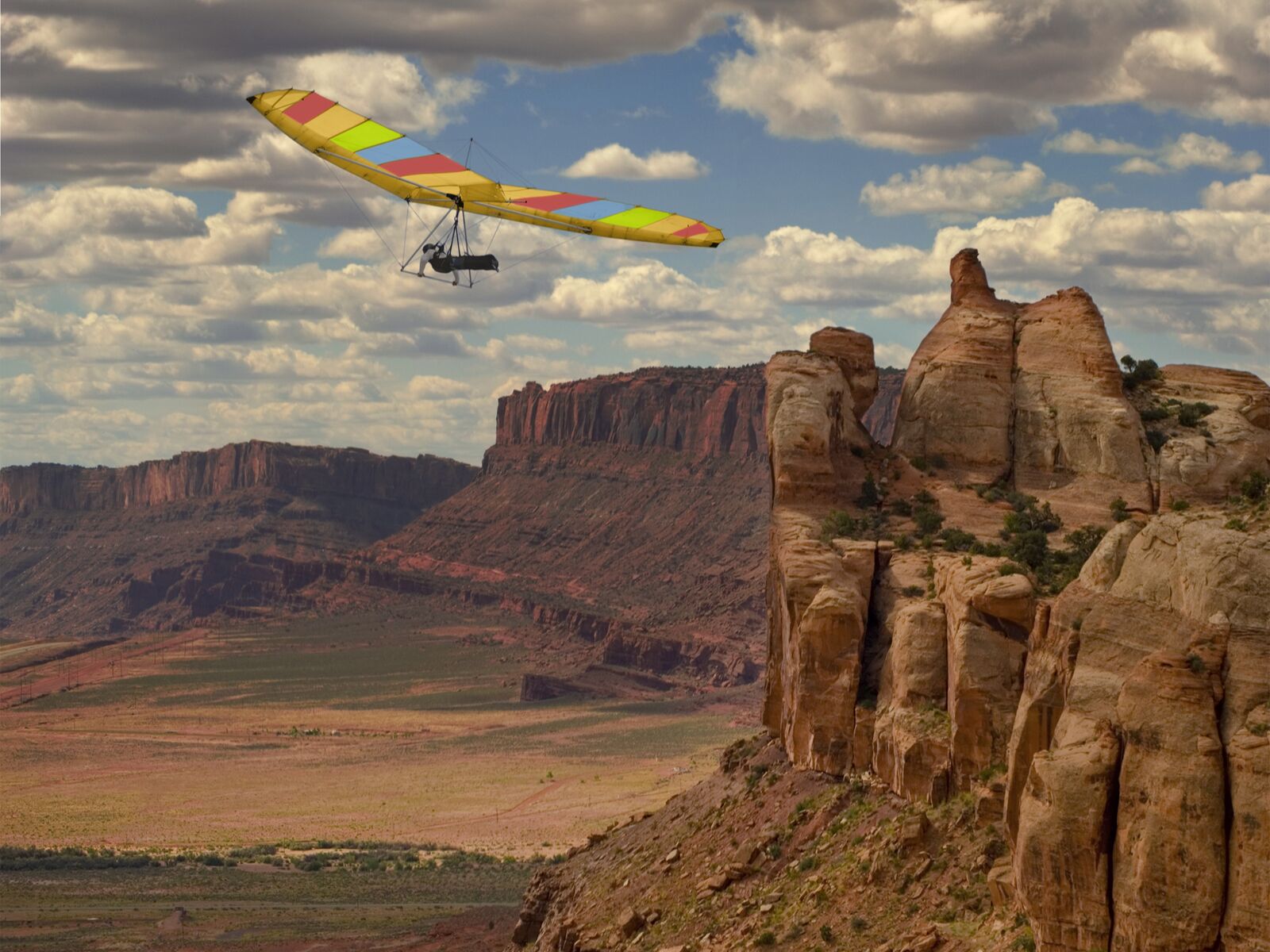 Utah is also a great state for hang gliders and paragliders due to predictable daily winds. It’s a perfect spot for flyers to increase their flight hours, test equipment, and meet like-minded enthusiasts. Flight parks and facilities in Utah are well maintained; the state is well aware of the popularity of both sports. Because there are numerous options, it tends to be a bit more affordable. The Birdman Academy has lessons and introductory flights for both paragliding and hang gliding starting around $150.

If you’re looking for a more luxurious flight lesson, try Lookout Mountain Flight Park in Georgia. The landing zone includes a private swimming pool, volleyball court, creekside campground, fire pits, and a private clubhouse – just in case you need to relax your nerves a bit before or after your flight.

Lookout Mountain has more than 20 miles of ridges, which means plenty of steady thermal winds overlooking acres of farmland. The large landing zone is well maintained and the park caters to both hang gliders and paragliders, with courses, tandem flights, and gear rentals available. Summer usually offers the most reliable flight conditions.

Where to try hang gliding, paragliding, and parasailing internationally 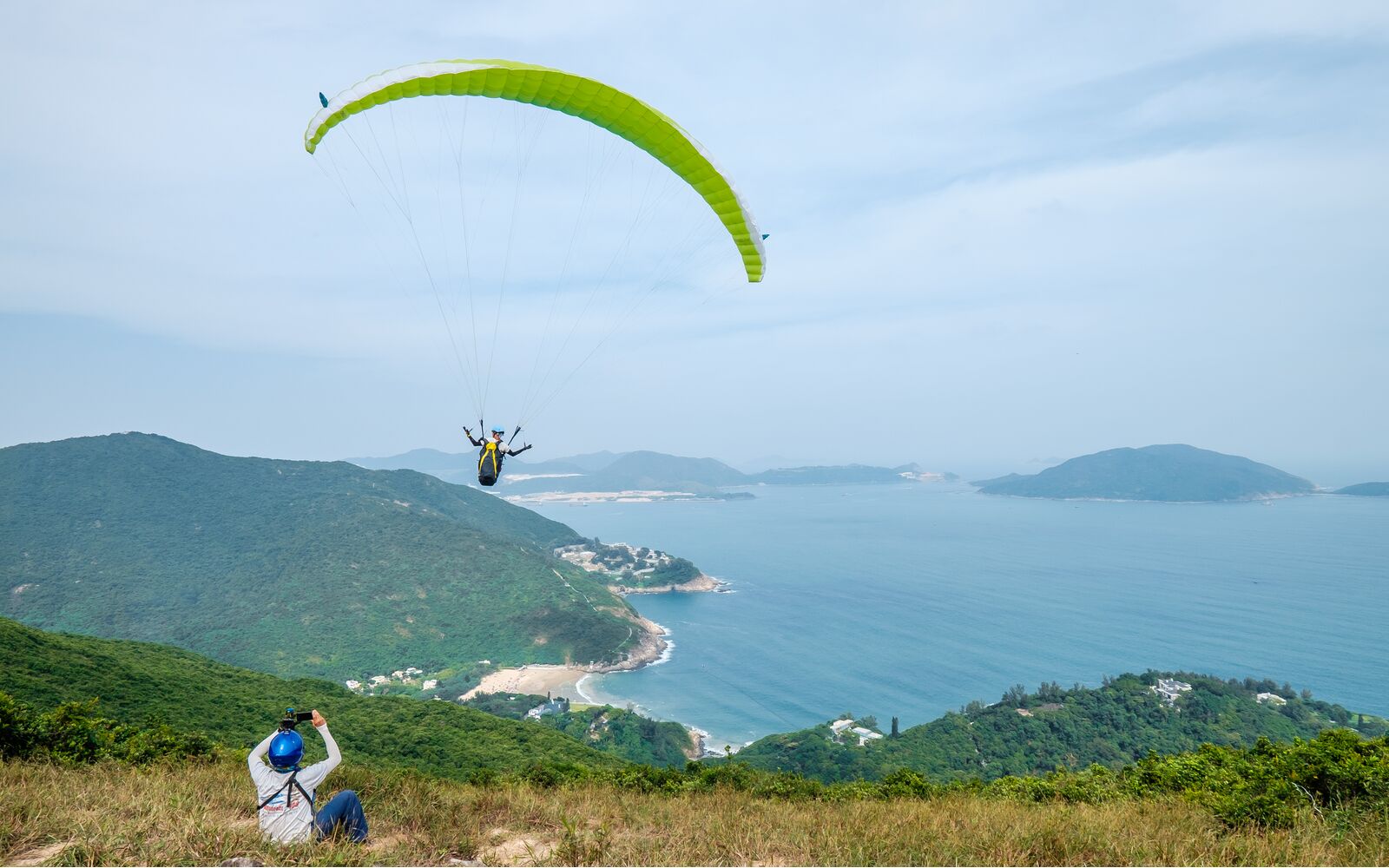 Whether you’re after views of mountains, beaches, valleys, or national parks, you’ll probably find it.

The words “silence” and “serene” don’t get used very often when referring to Hong Kong. But if you get the change to paraglide above the country, you’ll see that most of it is a vast nature reserve – and the scenery is magnificent.

According to Hong Kong Hike ‘N’ Fly owner (and pilot) Emil Kaminski, “Hong Kong is suitable [for paragliding] because of the easy access to some seriously big and scenic mountains, such as Dragon’s Back or Sunset Peak on Lantau (both of which are about 15 minutes from an MTR station), as well as year-round flying conditions.”

To have a truly unique hang gliding or paragliding experience in South America, consider trying it in Brazil. Because the country is blessed with miles of beaches and more greenery than almost anywhere else on the planet, you can count on scenic views. 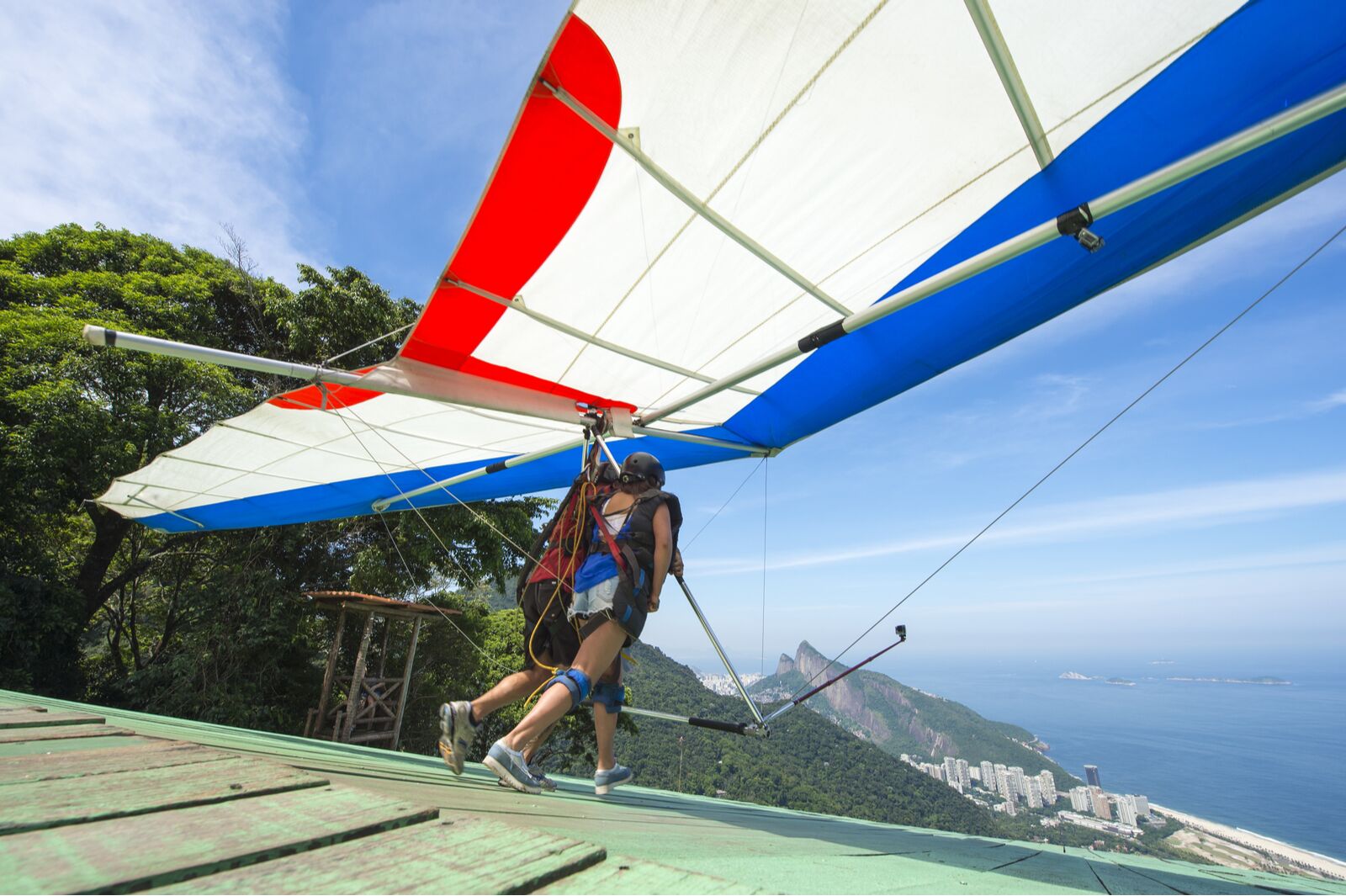 Running off the launch platform on a hang glider in Rio. Photo: lazyllama/Shutterstock

Most hang gliding and paragliding tours leave from Tijuca National Park and land on São Conrado Beach, just down the road from Ipanema Beach. Along with being aloft beside the mountains and beaches, tandem flights in Brazil also glide over the iconic Christ the Redeemer statue. You’ll find several outfits offering tours around Rio and the prices are fairly even for trying hang gliding vs paragliding.

Whether you choose paragliding or hang gliding, you can expect your flight to be a somewhat conflicting mix of extreme adrenaline and zen. Let’s call it ‘adrenalizen.” Though you may question what you got yourself into when it comes time to run off the cliff, when you get the signal, just run forward, wait for your wind to catch the wind, and feel the amazing feeling of hanging in the sky. It’s a view few get to experience.