A true Italian coffee connoisseur should make a pilgrimage to Venice at some point in their life. Though many Italian cities have a reputation for serving exceptional coffee (we see you, Milan), Venice has a particularly strong connection to one of the world’s favorite caffeinated beverages.

Venice’s coffee history dates back to the end of the 17th century, when the first cafe, Caffè Florian, popped up in the Piazza San Marco. Italy has been hit particularly hard by the COVID-19 pandemic, and many of Venice’s most storied establishments — including Caffè Florian and the historic Harry’s Bar — closed temporarily. Close calls like these are scary, but they can also help travelers appreciate the historic institutions that are still around.

Whether you’re a coffee fiend or a lover of history, these are the historic cafes in Venice that should be on your radar when you visit. 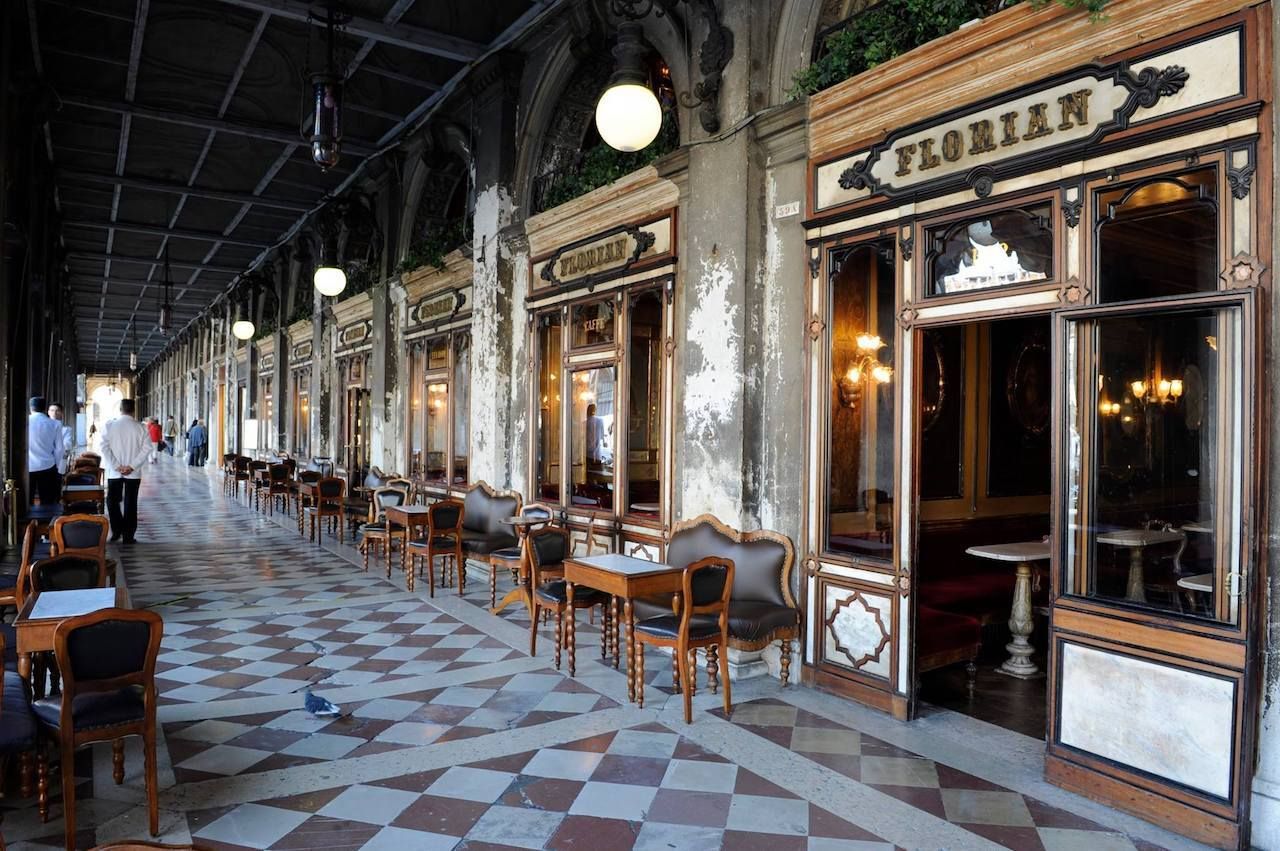 Founded in 1720 under the name Alla Venezia Trionfante, Caffè Florian in Piazza San Marco is the oldest continually operating cafe in Venice. For centuries, the cafe has been known for its esteemed and noteworthy clientele, including Casanova, Goethe, Andy Warhol, and the Italian playwright Carlo Goldoni. Characterized by its elegant architecture and ornately decorated rooms, the cafe remains an important cultural center. It currently hosts a variety of exhibitions, meetings, and installations, though you can also grab a simple cup of coffee and just enjoy the ambiance. You’ll likely find musicians playing in the square in front of the cafe, adding even more to the atmosphere. 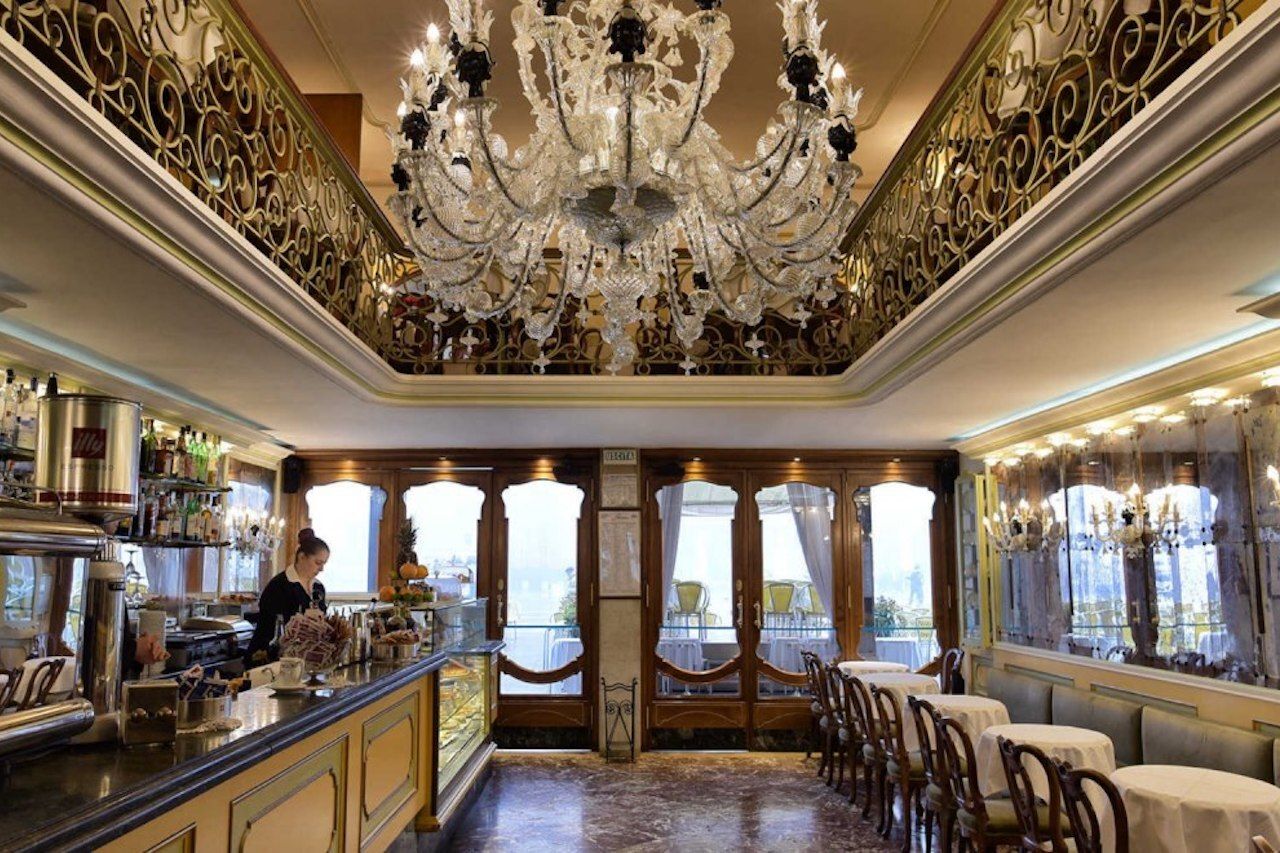 With an origin story that dates back to 1750, Caffe Lavena is one of the best-known cafes in Venice and is located at the foot of the Clock Tower by the Basilica in the Piazza San Marco. Formerly known as Caffe dei Foresti (“The Foreigners Cafe”), it was particularly popular among international visitors and became a meeting place for anyone who got lost in Venice’s labyrinthine streets. The city’s gondoliers often stationed themselves outside the cafe to assist lost visitors and help them find their way home. It took the name “Caffe Lavena” in 1860 when it was purchased by Carlo Lavena, who maintained the original architecture and furnishings. The cafe remains a historic landmark. 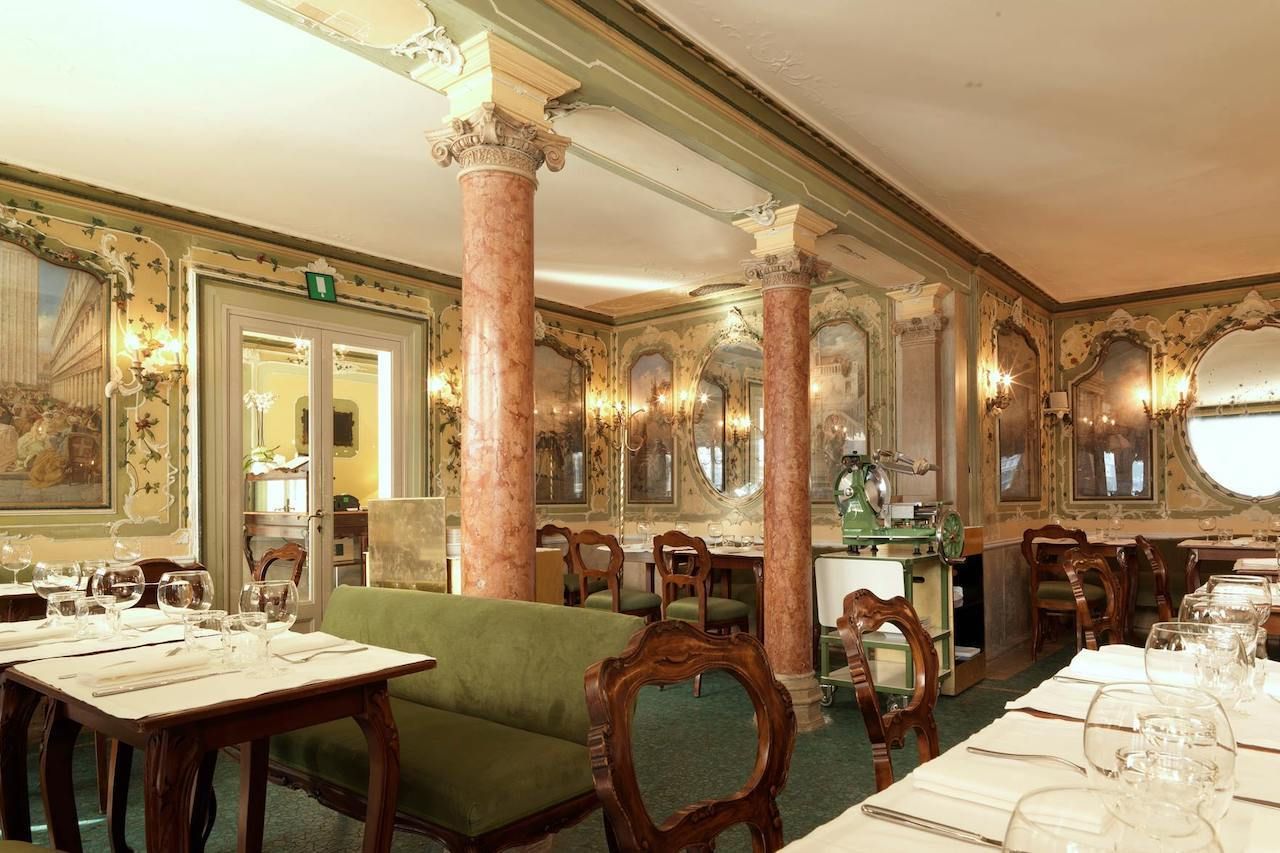 Grancaffe Quadri has also earned historic landmark status and has been in business since 1775. It retains its 18th-century feel though it was renovated in 2018, and you can easily imagine artistic giants of the age like Lord Byron, Alexandre Dumas, and Marcel Proust calling the place home. The cafe is accented by pastel-colored walls and adorned with mirrors, floral decor, and murals of Venice painted by 19th-century artist Giuseppe Ponga. It remains a favorite among the Hollywood elite, especially those attending the Venice Film Festival. The cafe is known among tourists for options that cater to patrons with strict diets, including people who are lactose intolerant. 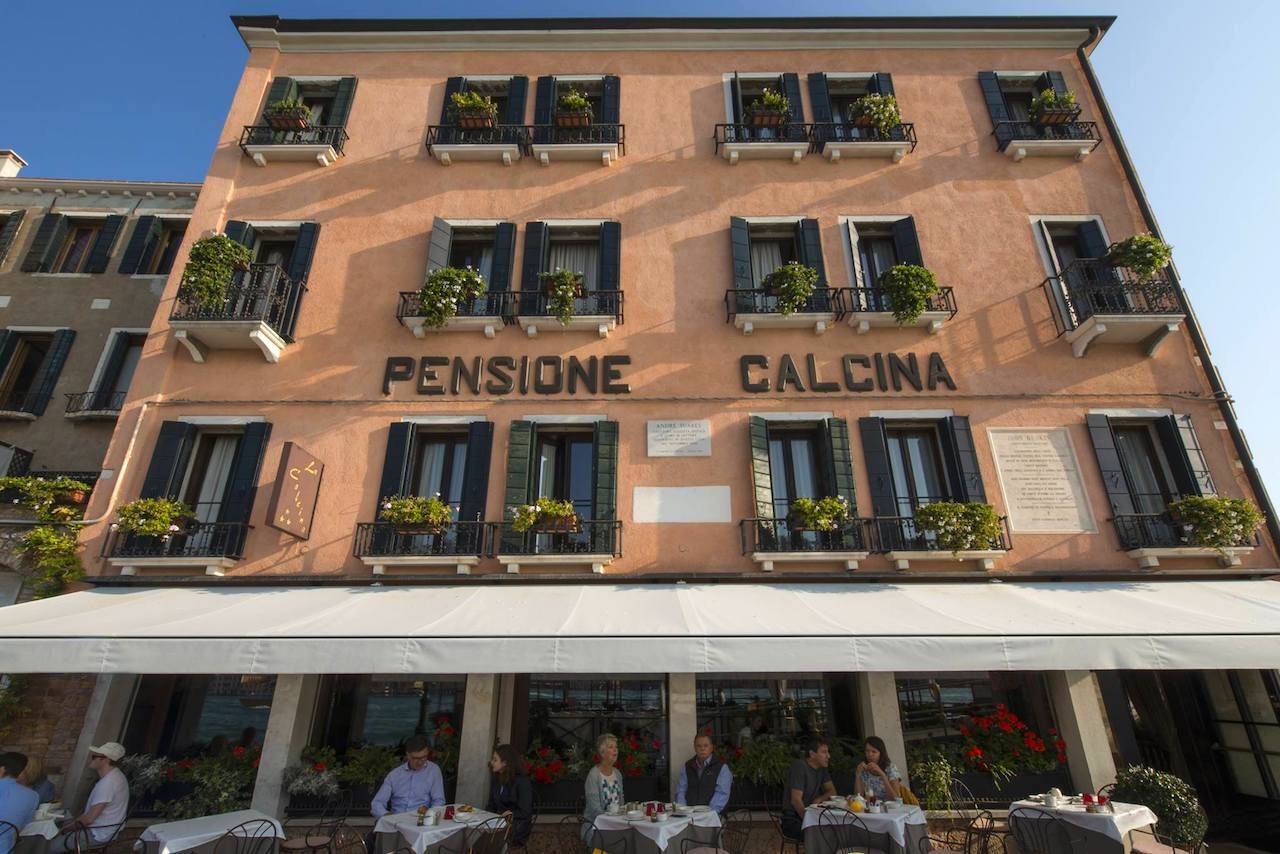 In the neighborhood of La Zattere in the south of the city, you’ll find Caffe La Calcina, one of the most popular cafes in Venice for artists and writers to meet in the early 1900s. Its name derives from the warehouse of the limestone sellers located in the building in the 17th century, causing many boats carrying stones and lime to pass under the nearby bridge, known as Ponte della Calcina (“the lime mortar bridge”). The building became a guest house in the 20th century, and its cafe was often written about by the famous writers who stayed there. The building became Caffe La Piscina, named after the beach resort located there during the 1960s, but has most recently taken the form of a restaurant and hotel called Restaurant La Calcina. No longer strictly a coffee shop, the restaurant still retains the building’s old-world charm while serving up more modern amenities. 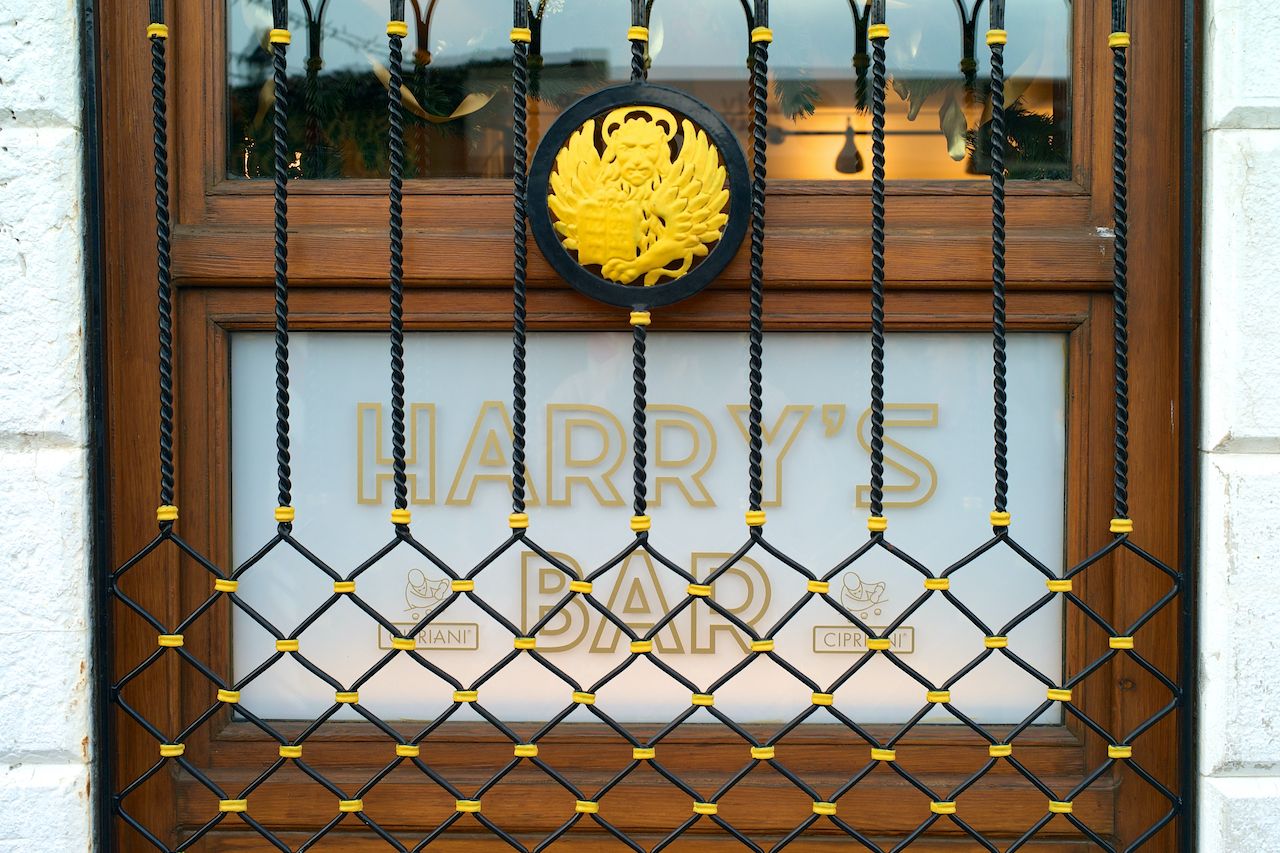 Harry’s Bar opened in 1931, and it was declared a national monument in 2001 by the Ministry of Cultural Heritage. While technically more of a bar and restaurant than a cafe, it’s worth a stop on any tour to sip a cocktail, enjoy a cuppa, and soak in the historical and cultural ambiance. Built in an old warehouse, Harry’s Bar is named for a wealthy young American named Harry Pickering, who had traveled to Venice and stayed at Hotel Europa. One day, Harry stopped showing up at the hotel bar, and bartender Giuseppe Cipriani asked why. Harry replied that drinking habits had bankrupted him, so Cipriani lent him $500. Two years later Harry returned to the hotel bar and gave Cipriani the equivalent of $4,500. At that moment Cipriani resolved to use the money to open a bar called Harry’s Bar. Serving alcohol as well as coffee, it became popular among artists, writers, and actors, including Charlie Chaplin, Orson Welles, and Truman Capote. It’s also the birthplace of the popular Bellini cocktail.

Food + DrinkCicchetti Are Venice’s Answer To Tapas. Here’s Where To Try Them.
Tagged
Coffee + Tea Venice, Italy
What did you think of this story?
Meh
Good
Awesome

The Best Coffee Cities in the World, According To a World Barista Championship Winner