Winter is an ideal time to visit Italy and some of its most popular cities. Cities to the north fill with Christmas markets to rival Germany’s while those of the south indulge in unique festive traditions. Parades, lighting displays, and atmospheric streets keep visitors outside while the dearth of tourists in museums and indulgent winter food options tempt visitors indoors. Here are seven of the best cities to visit in Italy during winter. 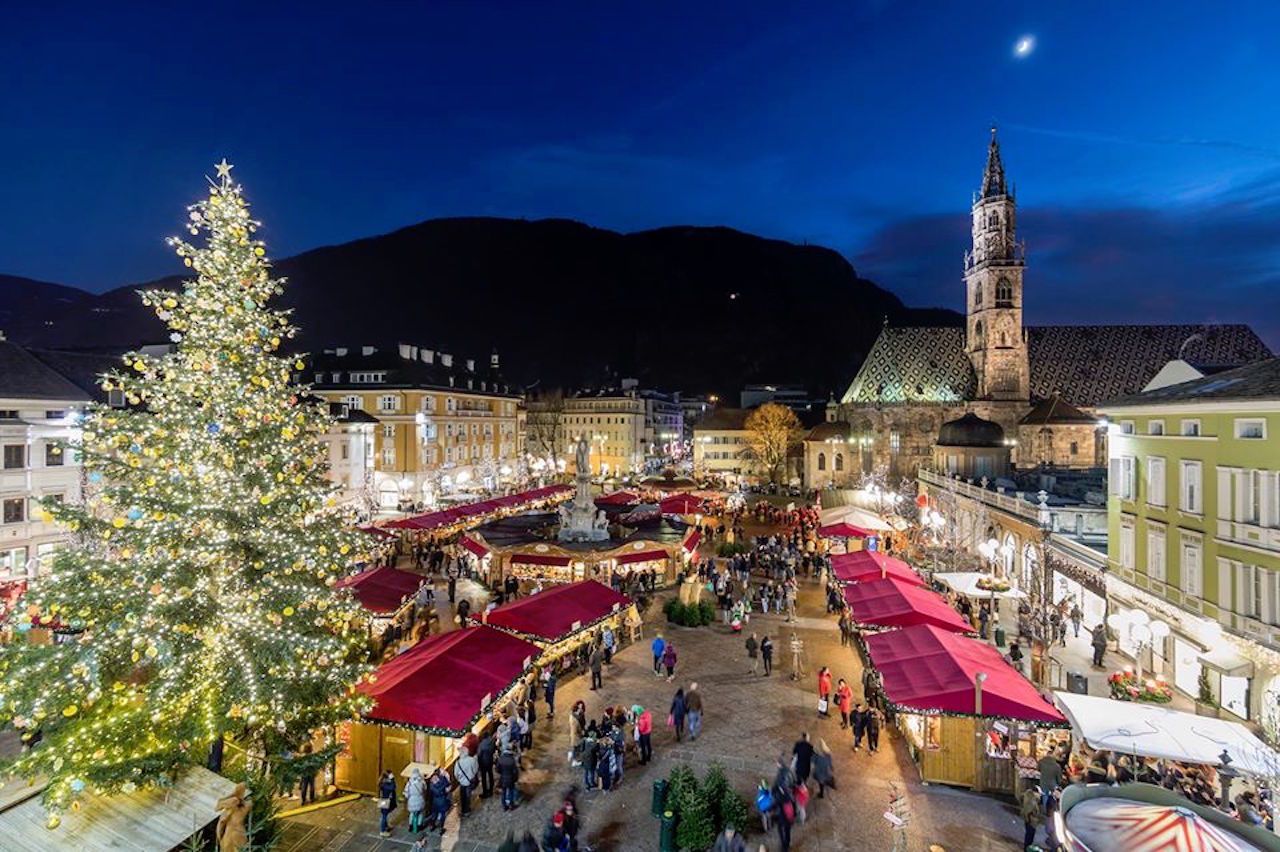 A visit to the alpine city of Bolzano during winter feels like walking into a Christmas card. Decorated, pastel-colored houses line narrow streets with a backdrop of snowy mountains. Bolzano’s Christmas markets, which have now been running for 29 years, are some of the best loved in Italy. Wooden huts with red-and-white-striped awnings sell strictly artisan, locally produced goods, from wooden decorations to traditional confectionery. As you browse, you can sip mulled wine and snack on strudel. And a winter’s evening visit is not complete without viewing the city from a horse-drawn carriage. For the young at heart, there is a merry-go-round and a miniature train, which completes a Christmas scene of olden times. 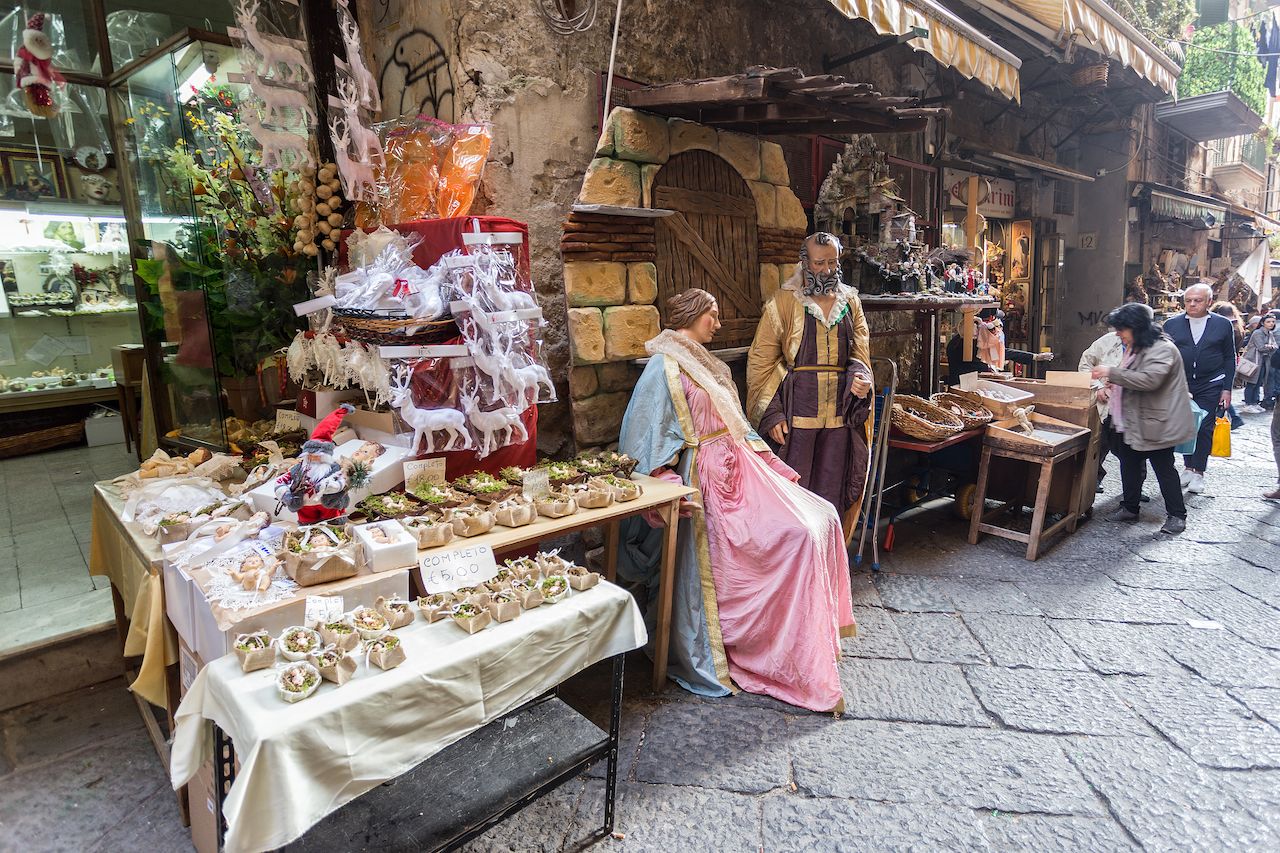 This southern Italian metropolis partakes in a particular Christmas tradition that makes it an essential winter destination. The festive period in Naples sees thousands of elaborate model nativity scenes set up in churches, shop windows, and restaurants. Called presepi, these miniature stage sets are constructed from handmade scenery and model figures, which are traditionally produced in workshops along the narrow street of Via San Gregorio Armeno. Classically, the elaborate displays include little scenes of everyday life, such as a baker making bread or a woman cleaning her house. Besides fundamental religious figures, shepherds, and animals, the nativity scenes often see a more prosaic intruder, including figurines of Leonardo DiCaprio or the fashion duo Dolce and Gabbana. Sparkling with lights, these presepi transform the city in winter. Visitors can learn more about this tradition in the Museum of the Presepe. 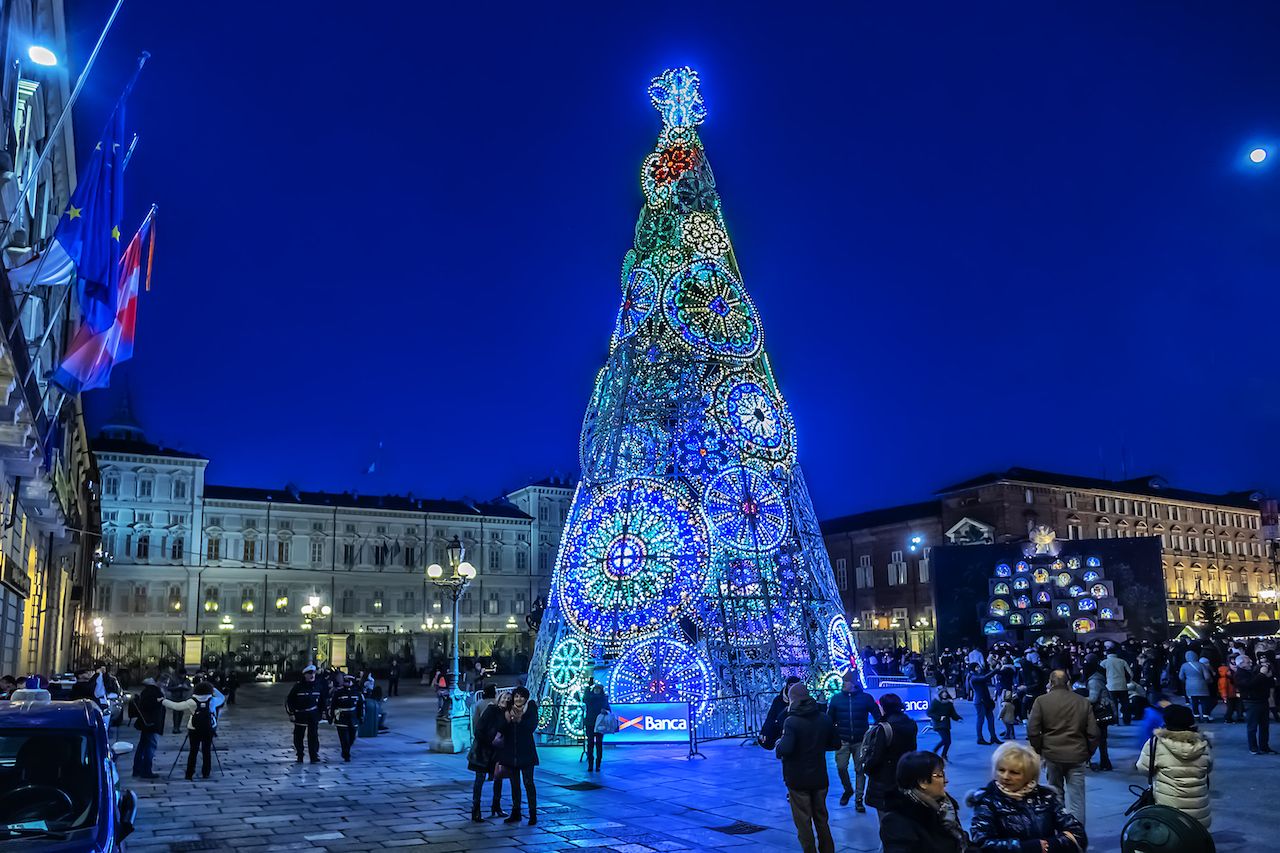 As well as being a gateway to ski resorts in the Alps, this city in northwest Italy is a winter destination in itself. During the festive season, the annual Luci d’Artista illuminate the city with creative lighting displays that are far from the tacky Christmas lights that garishly adorn many cities. Turin has some of the most prestigious museums in Italy, including the Egyptian Museum, second in the world only to that of Cairo and the National Museum of Cinema in the iconic Mole Antonelliana building. The Il Lingotto area, once home to the factory for FIAT automobiles, has been transformed into a modernist masterpiece by Renzo Piano housing the Museo Nazionale dell’Automobile and the original Eataly food emporium. In the center, Turin’s historic bars tempt visitors inside with their traditional Piemontese drink bicerin, a decadent combination of hot chocolate, coffee, and cream. Try it at the aptly named Caffè al Bicerin. 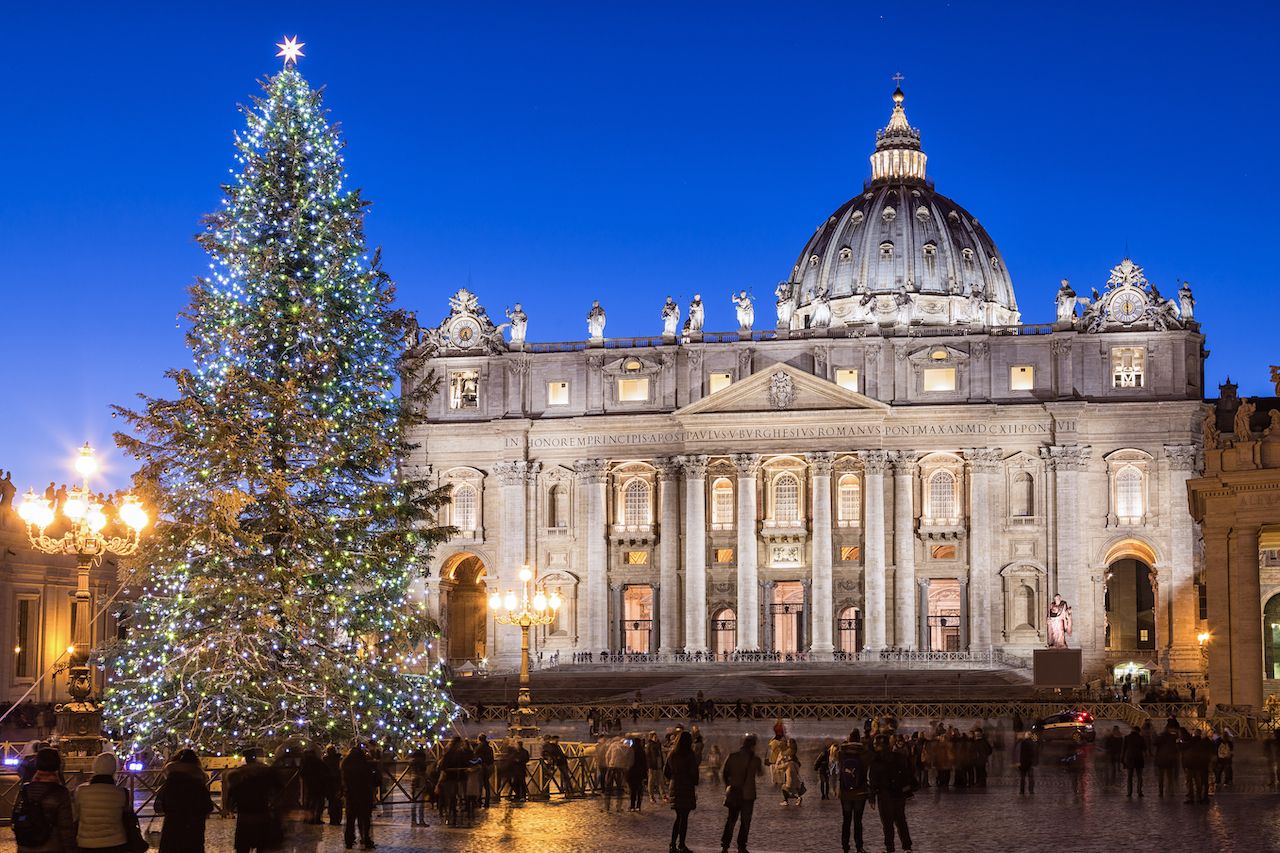 As the center of the Catholic faith, Rome is a particularly fitting place to spend the winter festivities if you want to avoid an over-commercialized yuletide. The square in front of St. Peter’s Church hosts a spectacular nativity scene and a giant Christmas tree while there is also an exhibition of 100 presepi in Vaticano. Churches throughout Rome put on free concerts, with organ music and choral pieces. If your visit continues into January, Rome also celebrates Epiphany, a public holiday across Italy on January 6, with their Viva la Befana parade. This sees costumed religious and folklore figures, including the gift-giving witch la Befana, moving through the city towards St Peter’s. Rome is also particularly serene over the winter period as there is a lull in tourist numbers, meaning you can visit iconic sights such as the Colosseum or Sistine Chapel with a little less elbow shoving. 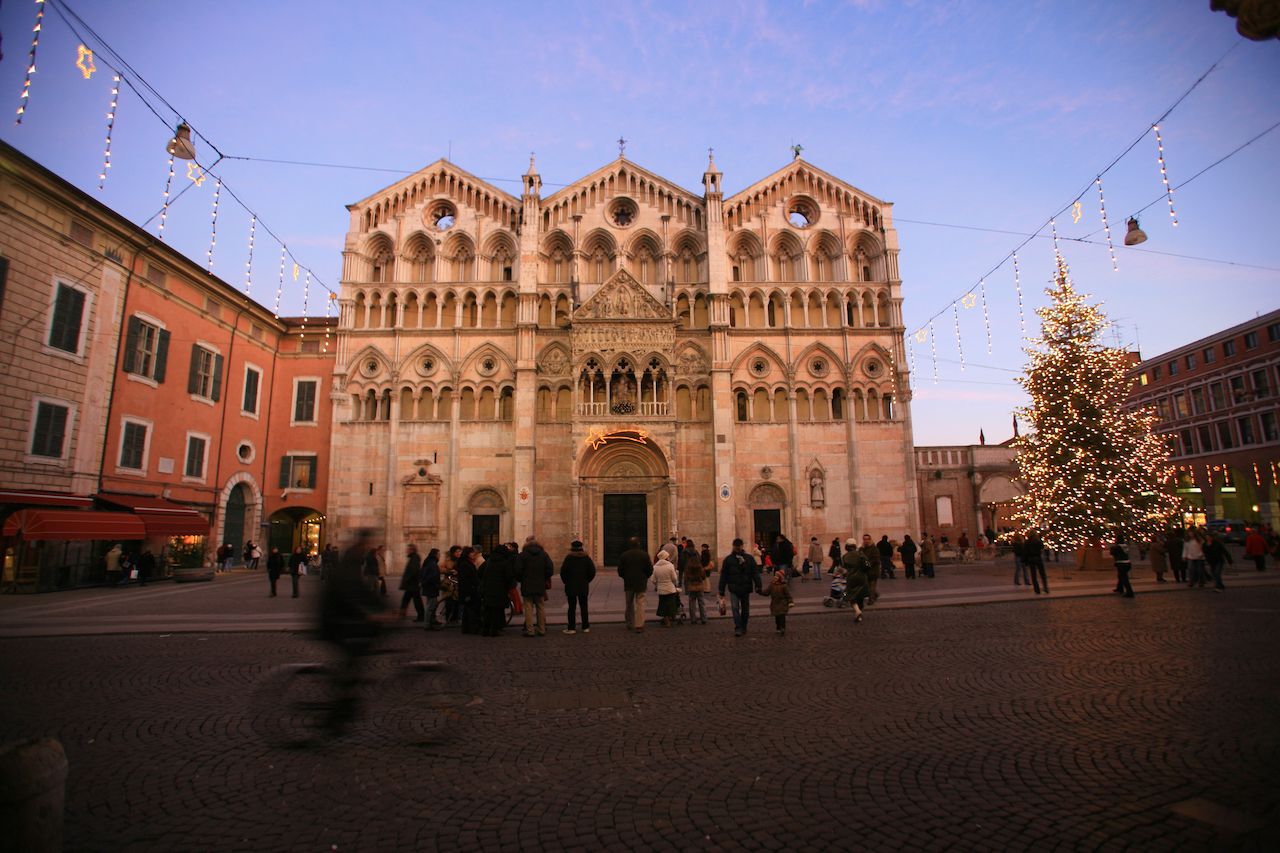 This city in the region of Emilia Romagna is subjected to thick fog during the winter months, which can be very romantic — well, at least for a few days. Through the misty medieval streets, warm yellow lights flicker hazily from cozy bars and restaurants, such as wooden beamed Ai Brindisi, which claims to be the oldest osteria (inn) in the world. Culture is also in good supply, with the spikey Palazzo dei Diamanti art gallery holding frequent exhibitions and the Cathedral Museum with art by renowned 14th century Ferrara artist Cosmè Tura. Ferrara was also once at the heart of the domain of the powerful Este family, and their moated and embattled castle rises up out of the fog in the center of the city. In the square beside the cathedral, there are frequent markets of artisan products and local foods, particularly over the festive period. 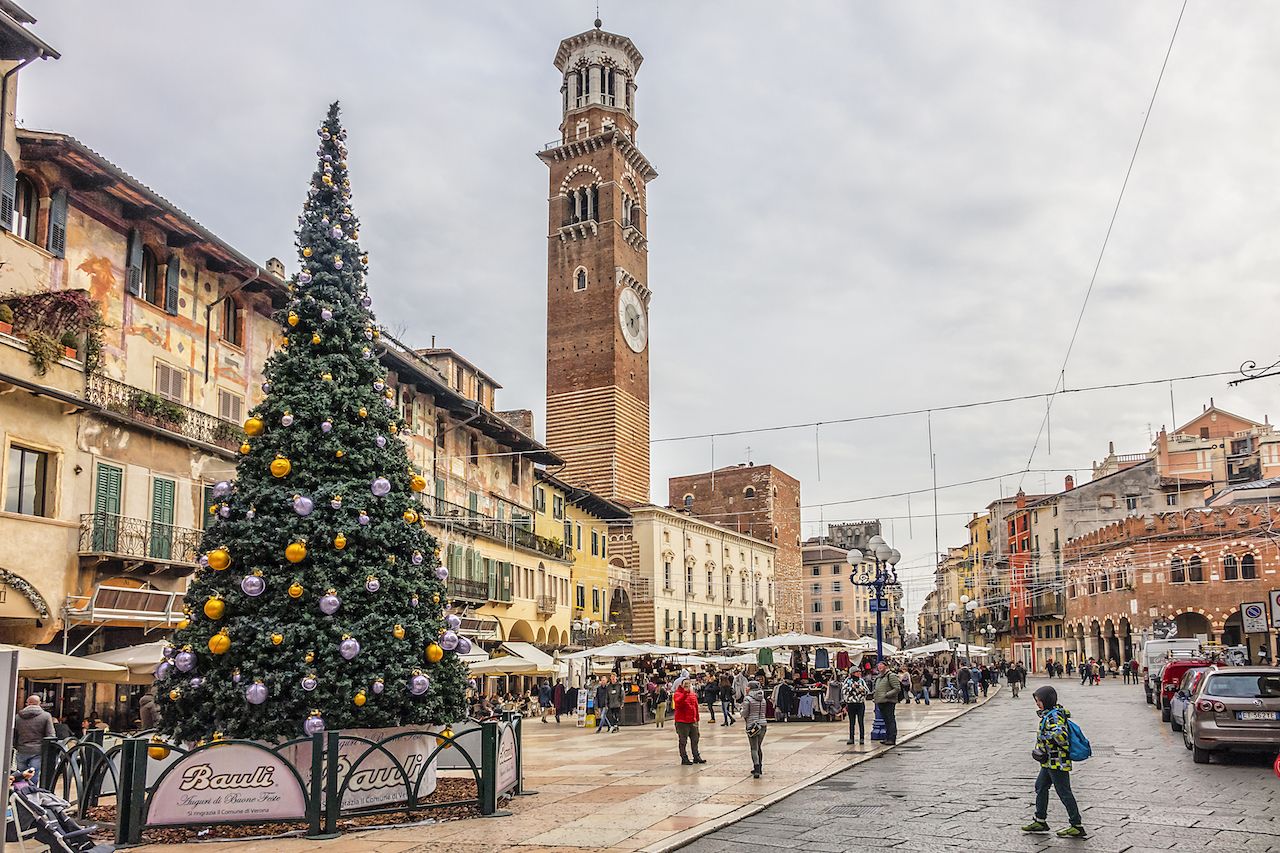 As the home of Romeo and Juliet, Verona is known as the city of romance. During the winter the festive lights and decorations add yet more poetry to its attractions. Visitors can see Juliet’s balcony in an enclosed courtyard, as well as making a pilgrimage to Juliet’s tomb in the monastery of San Francesco al Corso. Here you can find a museum of mural paintings or frescoes, and in one of the decorated rooms of the monastery, civil unions are conducted for both Italians and foreigners, which could make for a memorable marriage ceremony. In addition, Verona’s Christmas markets are particularly popular, with stallholders coming from Nuremberg, and the city gate and the main streets are adorned with lights. 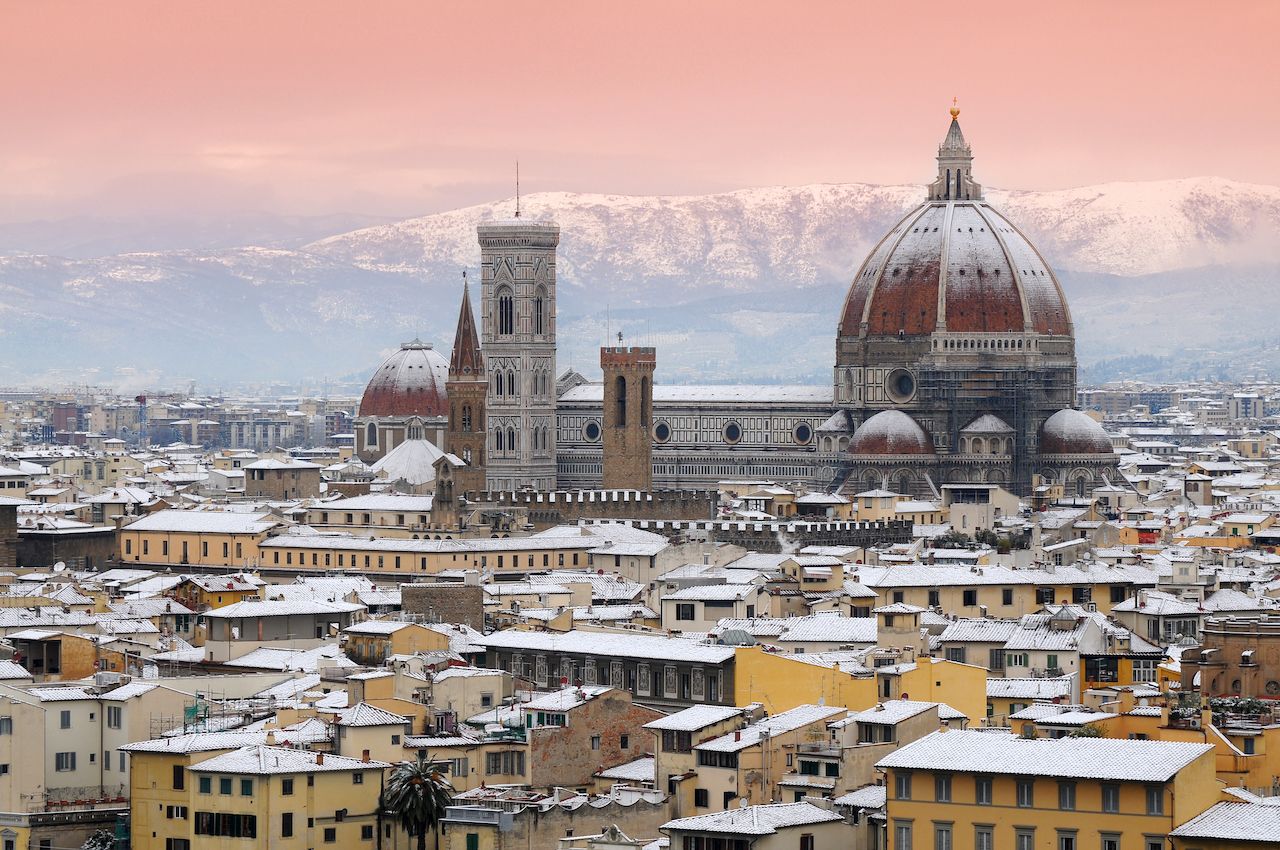 There’s nothing enjoyable about being hit with a selfie stick, so avoid Florence and its crowds in the summer and head to the city in the depths of winter. You’ll have some breathing space in the magnificent Uffizi art gallery, where you can get up close to paintings by Botticelli and Raphael. Wandering around the city feels particularly special at this time of year, with Christmas markets in front of the luminous white church of Santa Croce and a life-size nativity scene beside the famous Duomo. Chilly hands can be warmed with a visit to Vestri, a chocolate shop whose owners also have a cocoa plantation in the Dominican Republic. Their winter specialty is a scoop of ice cream drowned in a cup of steaming hot chocolate.

Travel7 Unexpected European Cities That Come To Life in the Winter
Tagged
Holidays Insider Guides Italy
What did you think of this story?
Meh
Good
Awesome