Surfing is a rite of passage in coastal cultures. Learn how to do it, and you’re forever part of the legend of the endless summer, one of those eternally cool types who spend their days hanging 10 and evenings chatting about the waves of the day at a beach party, Pacifico in hand. The lifestyle can seem intimidating from the outside, especially in places like Malibu or Santa Cruz, both top California surf spots where locals want to keep the waves to themselves.

If you want to skip that “locals only” mentality, head to North Carolina to learn how to surf. Here, surf breaks start small and progress consistently, swells hit year-round, and the culture of Southern hospitality ensures that instructors and fellow surfers are quick to offer a tip or point you towards the right break. Here’s where to learn to surf in North Carolina. 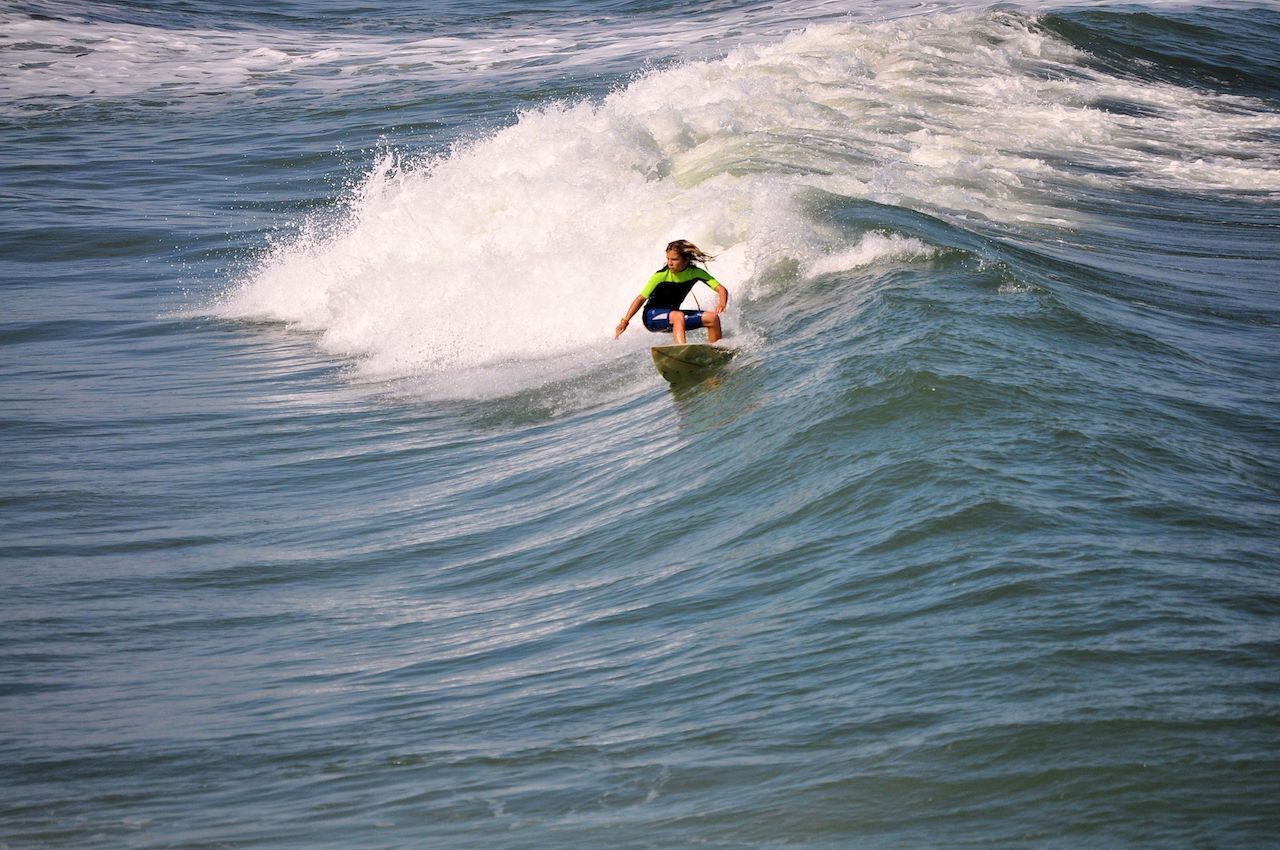 With its dive sites and mellow beaches, the Outer Banks is one of the state’s top tourist destinations. It’s also the top place to surf in North Carolina. The islands face east and curve south, perfectly in line with Atlantic swells that mean there are almost always waves breaking somewhere here. For gear and lessons, head to Hatteras Island Boardsports, a block from the break at Avon Fishing Pier. Another great spot for beginners is Corolla Beach in the northern part of the Outer Banks. Especially in summer, the smaller waves and warm water make it great for beginners and families.

The town of Duck is an ideal place to base yourself on a surf trip to the Outer Banks. Hotels and resorts abound, with lessons available at Sanderling Resort from Kitty Hawk Kites, so you’ll feel more confident before heading up to Corolla or to one of the other breaks on your own. Right near the beach are plenty of spots for apres-tacos, beers, and revelry, including Coastal Cravings and NC Coast Grill and Bar.

Ocracoke Island in the far south of the Outer Banks is worth a stop as well. There’s a lifeguarded beach south of the town center here that is perfect for beginner and intermediate surfers to hone their skills. The town of Ocracoke is tiny, and much of the island is undeveloped. Crowds here are thin, so you can practice on the beginner’s break without feeling self-conscious.

Take a good look before you enter the water, as potent winter storms shift the sand bottom and create new sandbars year over year. Come spring, a new, slowly peeling wave may appear where was none before. Waves are consistent year-round along the Outer Banks, but the water temperature is warmest in summer and early fall. That said, it’s never like Hawaii. Bring a wetsuit with you, as you’ll need it when learning to surf in the Outer Banks, especially in winter and spring when the water is below 60 degrees. No matter where or when you plan to surf, visit OBX Surf Info to check conditions. 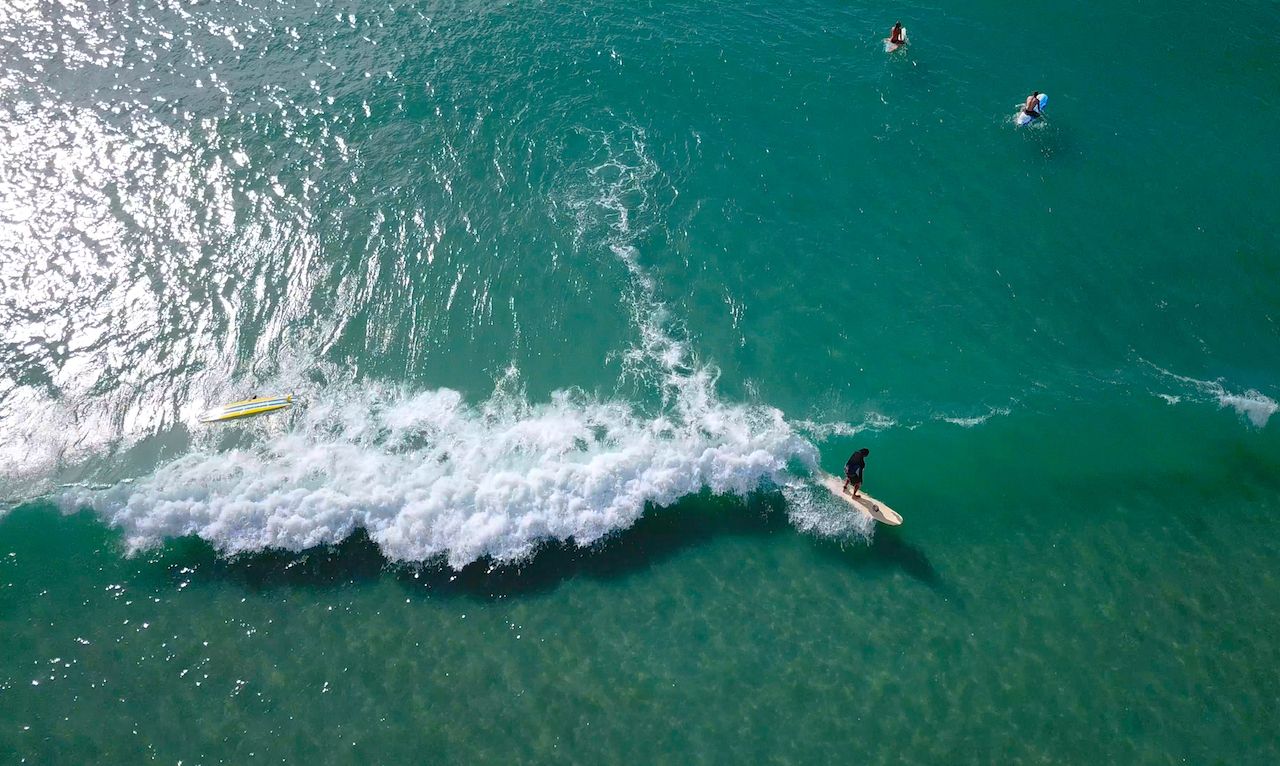 Wrightsville Beach is just off the coast from the university city of Wilmington, offering the coastal vibe of the Outer Banks with additional dining, lodging, and nightlife a few minutes’ drive away. You have many options for lessons and rentals here, including Surf Lessons with Sean and WB Surf Camp. If surfing sans lesson, head to the northern end of the beach where the waves are smaller, and the crowds of local surfers more sparse. Other spots include near Johnnie Mercer’s Fishing Pier, at the end of the main road coming into Wrightsville Beach, and at Crystal Pier, farther south at Beach Access #36.

You’re protected from swells coming from the North Atlantic here, unlike at the Outer Banks, which are on the state’s easterly bulge. That means the waves don’t get as big here as in the Outer Banks, and the water doesn’t get as cold either — peaking at around 82 degrees in July and dipping to the 60s in the winter. No wetsuit is needed during the summer, and as luck would have it, summer and fall bring the best conditions for surfing. After your first surf in North Carolina, refuel with a plate of fresh seafood at Shark Bar & Kitchen. If you still have energy, head next door to the Palm Room at 11 E. Salisbury Street near Johnnie Mercer’s, the spot for live music. 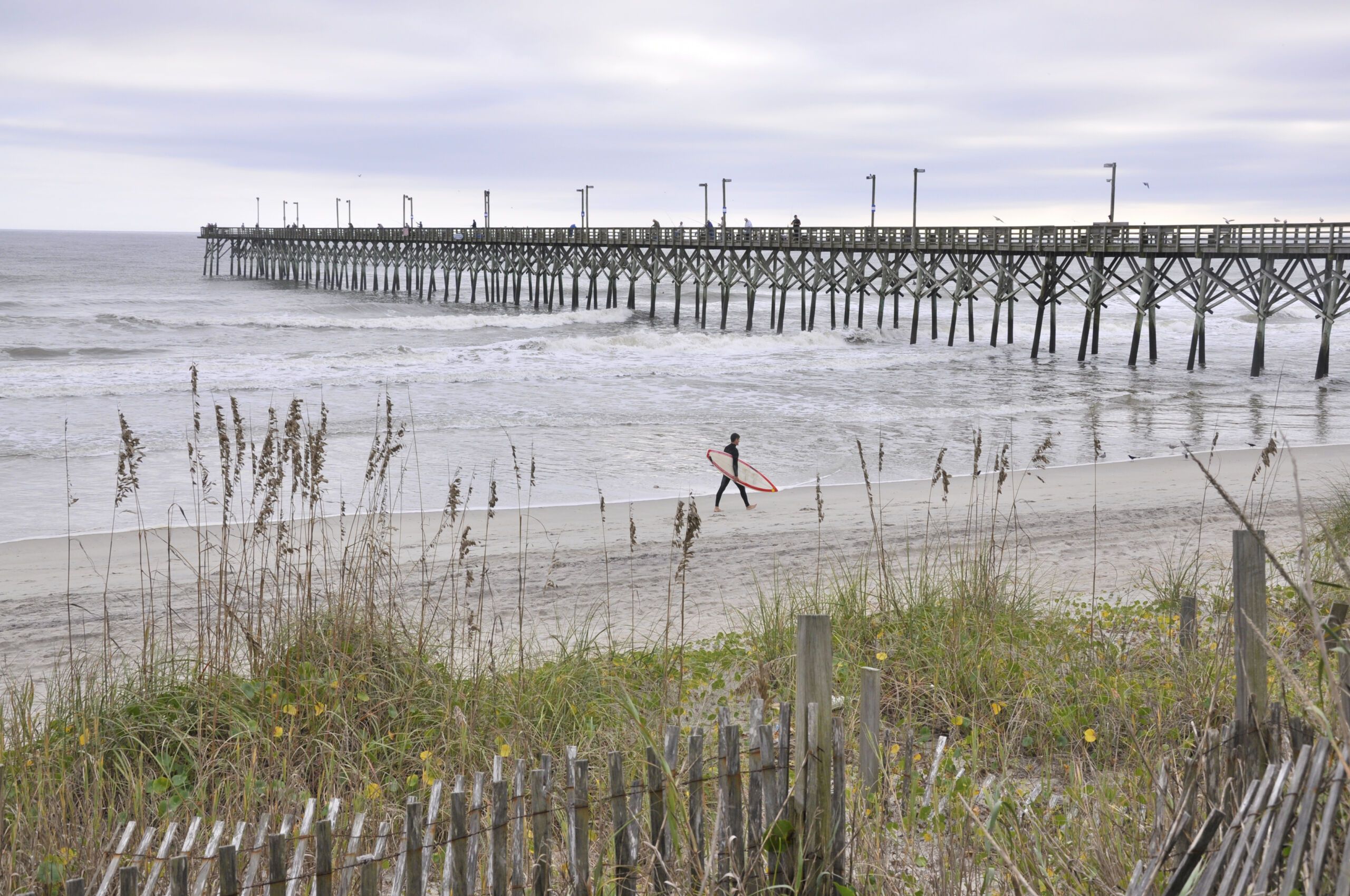 North of Wilmington is Topsail Island, home to the appropriately named town of Surf City. Like everywhere on the coast, the culture revolves around the water here, but the sheer expanse of surfable beach on Topsail Island makes this a prime destination for all levels. This is a beach break, as opposed to a reef break, so the shifting sands mean you won’t have one perfect spot to line up for the wave. But beginners will find that the north end of Topsail Beach offers up consistent, smaller waves for beginners.

If visiting in the summer, enjoy the pristine water temperatures that hover in the 80s. In winter, the water sits in the 50s and 60s, with February seeing the coldest water temperatures. Head to Surf City Surf School for lessons and rentals. Topsail Island is lined with surf bars and cafes on and near New River Drive. We’re partial to the Trailer Bar and 10th Street Bar and Grill, about a mile apart from each other but both within a couple of blocks of the sand. Surf Dog Bites & Brews is perfect for a post-surf beer while the sun’s still out.