Macon, Georgia, is an idyllic Southern city brimming with history and charm about an hour’s drive south from Atlanta. Yet those descriptors don’t fully capture all that this eclectic, yet intimate, city has to offer — especially when it comes to music. As the hometown of the inimitable Little Richard, soul legend Otis Redding, and Southern rock pioneers The Allman Brothers, Macon lures music lovers in droves.

Macon is steadily becoming an affordable option for the movie and music-making industries, and is drawing in visitors and tourists eager to see the city (and in the spring, not just because it’s known as the “Cherry Blossom Capital of the World”). Now is a great time to visit before it becomes known as the Hollywood of Georgia.

What to do in Macon, Georgia 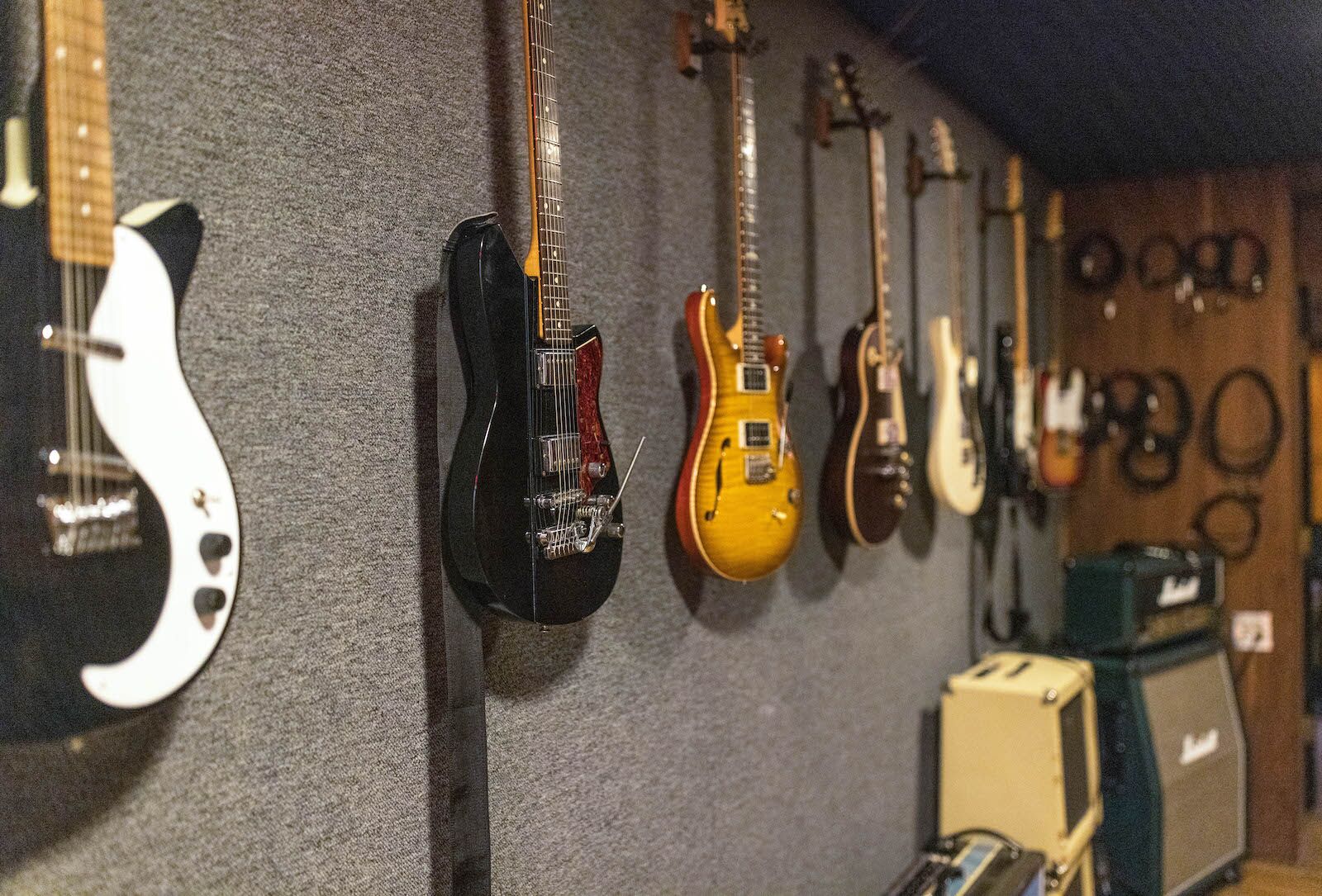 Capricorn Sound Studios and Museum: If you love Southern rock, a journey to Macon isn’t complete without a tour of Capricorn Sound Studios and Museum. Bands like the Allman Brothers and Charlie Daniels laid down tracks that would later become hits in Studio A during Capricorn’s heyday in the 1970s. The museum upstairs from the studio is designed to look like a vinyl record store. Here, visitors can sit in sections, don headphones, and take a musical tour of the Capricorn Music legacy. Capricorn is still an active recording studio, and the company closes during some sessions. Be sure to call ahead to ensure it’s open before you visit. 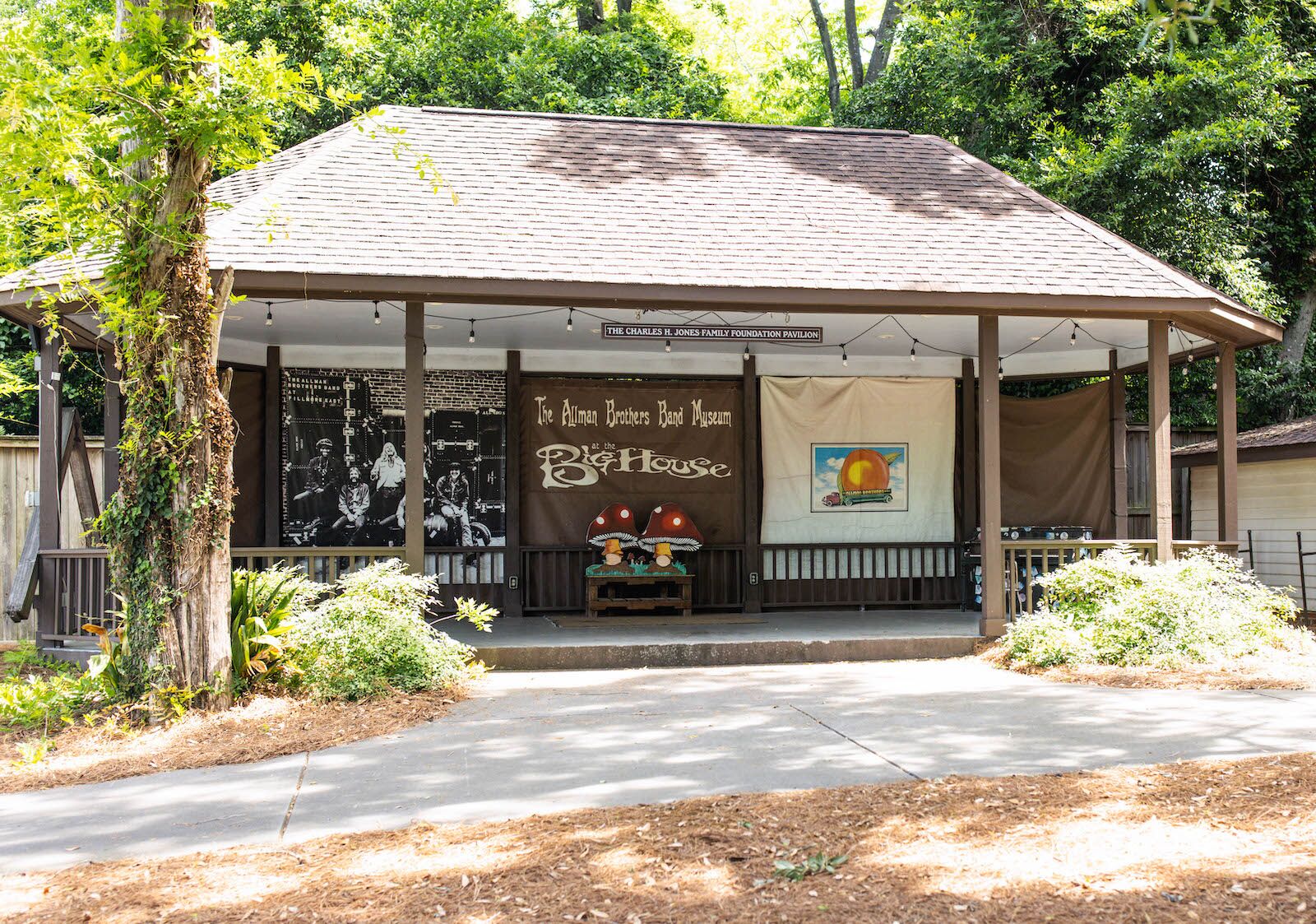 Allman Brothers Band Museum at The Big House: The tick-tock of time is suspended as you step through the front door of the Big House, the home and communal hangout for the Allman Brothers Band. At the home-turned-museum, visitors can enter rooms and see the preserved housewares and artifacts from the band’s time on tour. I noticed a steady stream of fans entering as I puttered around the house, listening to the band’s music. The visitors were eager to share their Allman Brothers Band tales. I watched as they instantly connected and regaled each other with personal Allman Brothers concert stories. The tours are self-guided, but all of the employees are well-versed in Allman Band history and can answer your questions.

The Otis Redding Foundation: An intimate and deeply personal tribute to the legendary balladeer and songwriter, the museum uses photographs, recordings, and telegrams to provide a glimpse into Otis Redding the husband and father. The museum’s holdings also include Redding’s suitcase salvaged from the plane crash that claimed his life. The museum is so intimate that while you’re perusing, Zelma Redding (Otis’s widow) might enter and start a conversation about the weather, which is what happened while I visited the museum. The foundation is a non-profit, music-focused organization for young people. Each summer, the foundation’s Otis Music Camp instructs youths on songwriting, music theory, vocal techniques, and the music business. Photos and videos are not allowed and tours are self-guided. If you have any Redding or museum-related questions, I found the employees at the front desk very knowledgeable. 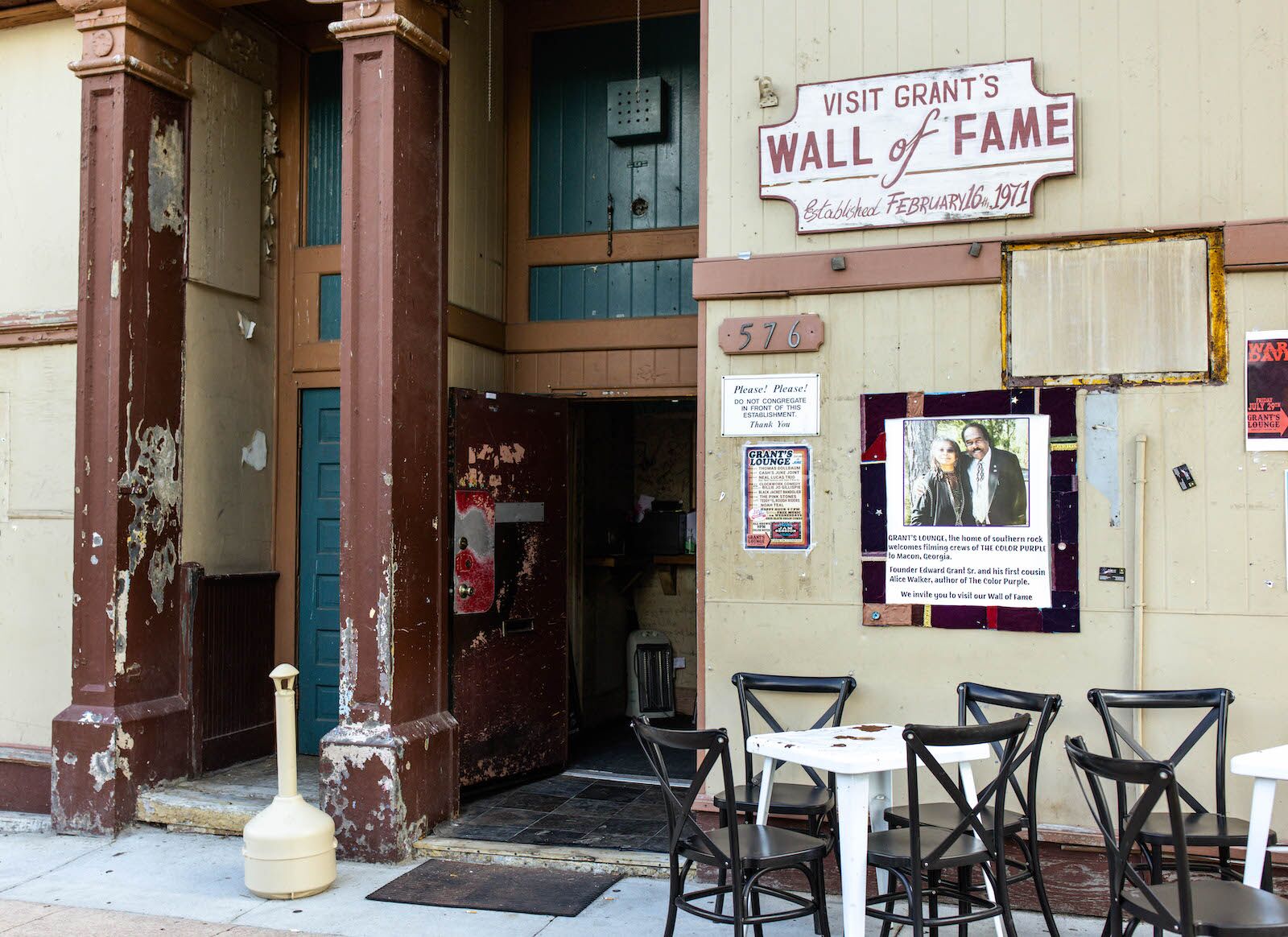 Historic Grant’s Lounge: Sip on a cold one while watching a live performance at this iconic nightclub. Grant’s is a Black-owned nightclub that has been operating for more than 50 years. Many musical greats like the Allman Brothers, Tom Petty, and Eric Clapton have graced the stage at Grant’s. While visiting, I was treated to a stellar performance by 16-year-old Southern rocker Noah Teal. If you visit the lounge for a performance, there is a small cover charge and seating is limited. I was able to stop by earlier in the day to walk through and check the place out without paying a fee. 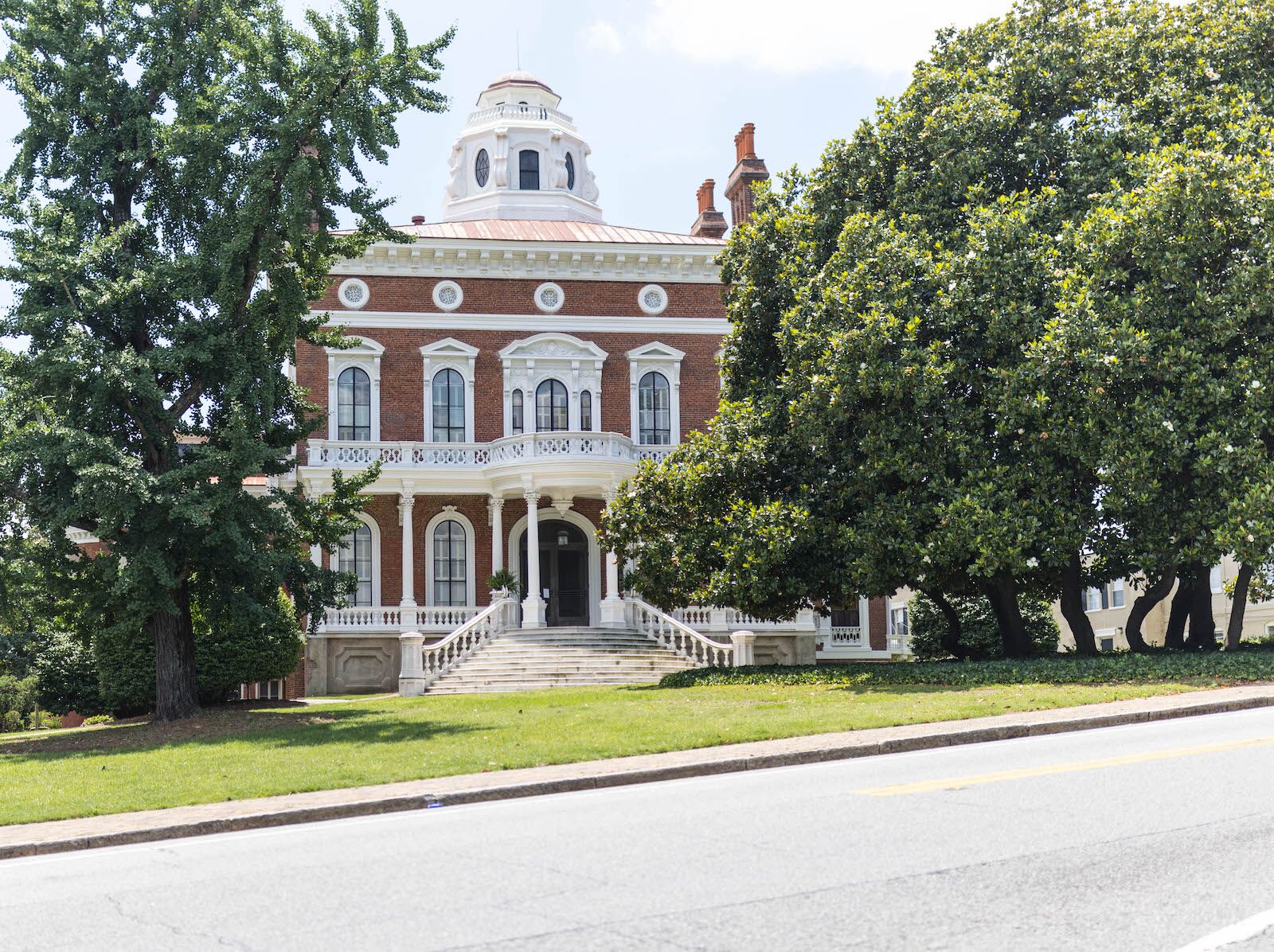 Hay House: This Renaissance Revival historic home dates back to 1859 and showcases Southern opulence. The house is filled with architectural marvels and so many beautifully preserved historic gems that visitors feel like they’ve entered a time capsule. If you’re into architecture, this tour is a must-see (the house can only be experienced via a guided tour). Tours begin at 10 AM and end at 3 PM, Wednesday through Sunday.

Macon Tourism Office: Local lore has it that Little Richard wrote the hit song “Tutti Frutti” while working in the building that houses the tourism office. The office was once a bus depot and it’s said that Little Richard Penniman penned the song in the kitchen. While there, you can watch a short introductory film on Macon’s history and things to do. 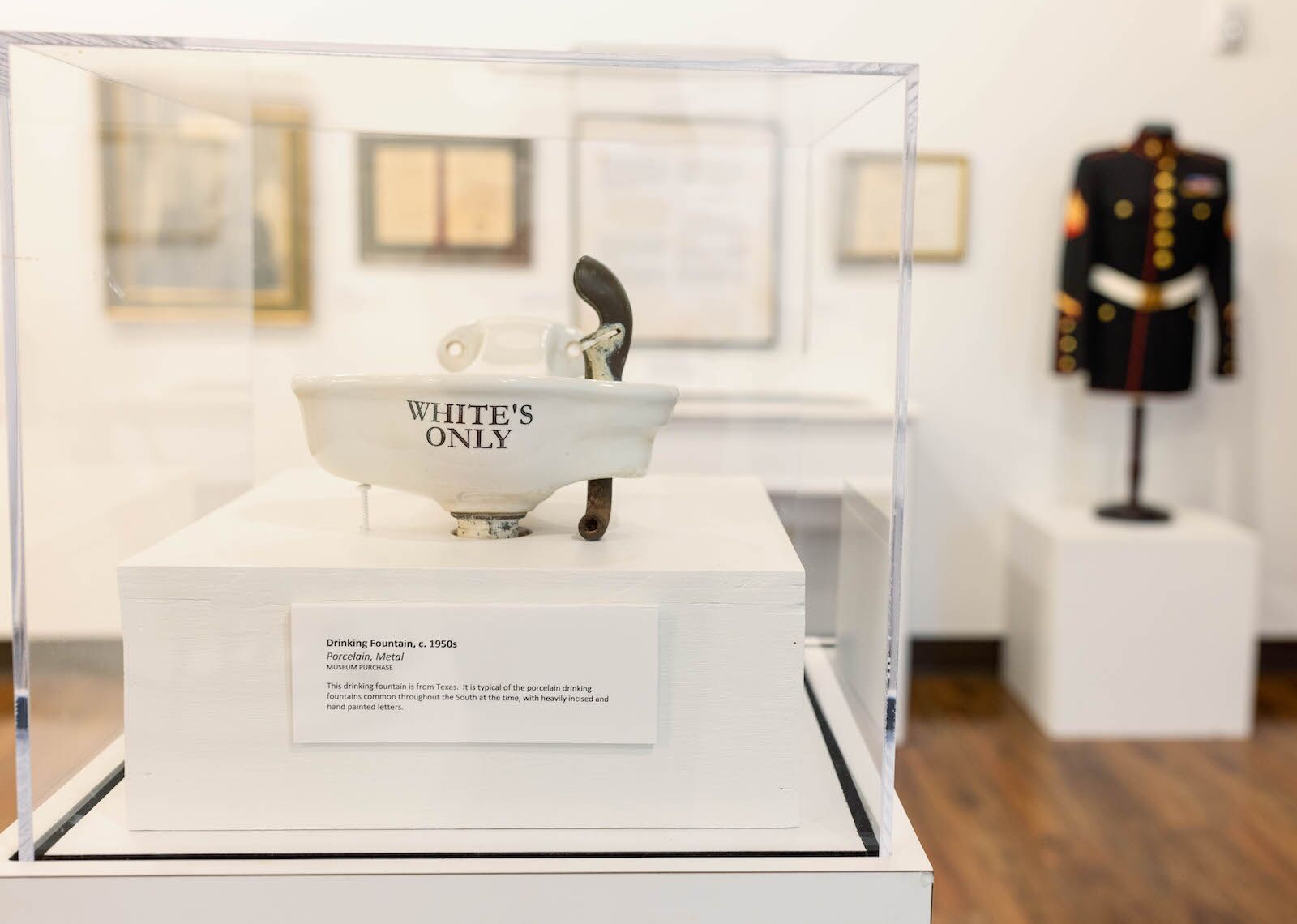 Tubman African American Museum: The museum’s permanent holdings include the “Untold Stories” and “Macon’s Music Heritage” exhibits. I was particularly enthralled by the “white’s only” water fountain fixture and a “sundown town” warning sign on display in the “Untold Stories” collection. As an expert in African American history with world-class museums at my fingertips at home in the Washington, DC, area, I was impressed. In my academic studies and museum-going experiences, I’ve never seen either of those items on display. If those two were the only things on display, the museum would be worth a visit, but there’s so much more. 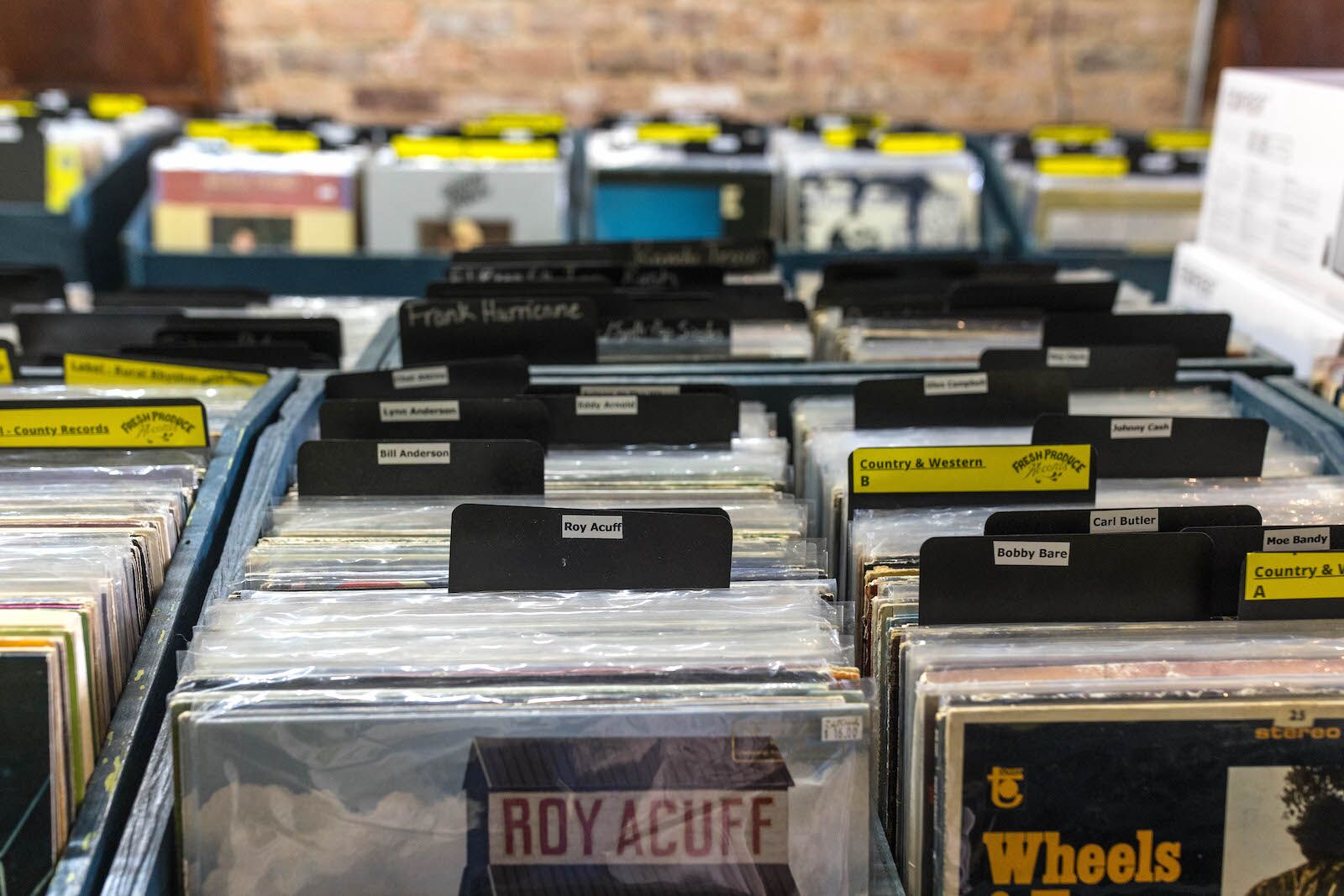 Fresh Produce Records: As I trundled along Cherry Street in downtown Macon, peering into storefront windows, I stumbled upon Fresh Produce, a throwback vinyl record store. I stood immobilized on the sidewalk trying to calculate when I last saw a record store. Finally, I walked in and was instantly hit with all the feels associated with being a John Hughes-loving, 80s kid. If you love vinyl or just want to thumb through records for old time’s sake, stop by Fresh Produce Records while in Macon.

Reboot Retrocade & Bar: Revisit the 80s at this old-school arcade and bar. The walls of Reboot are lined with classic video games and pinball machines. Go to the bar and exchange your cash for tokens, and grab a drink while you’re at it. Relive your younger years and enjoy the 80s again, except now that you’re old enough, enjoy an alcoholic beverage while playing.

Where to eat and drink in Macon 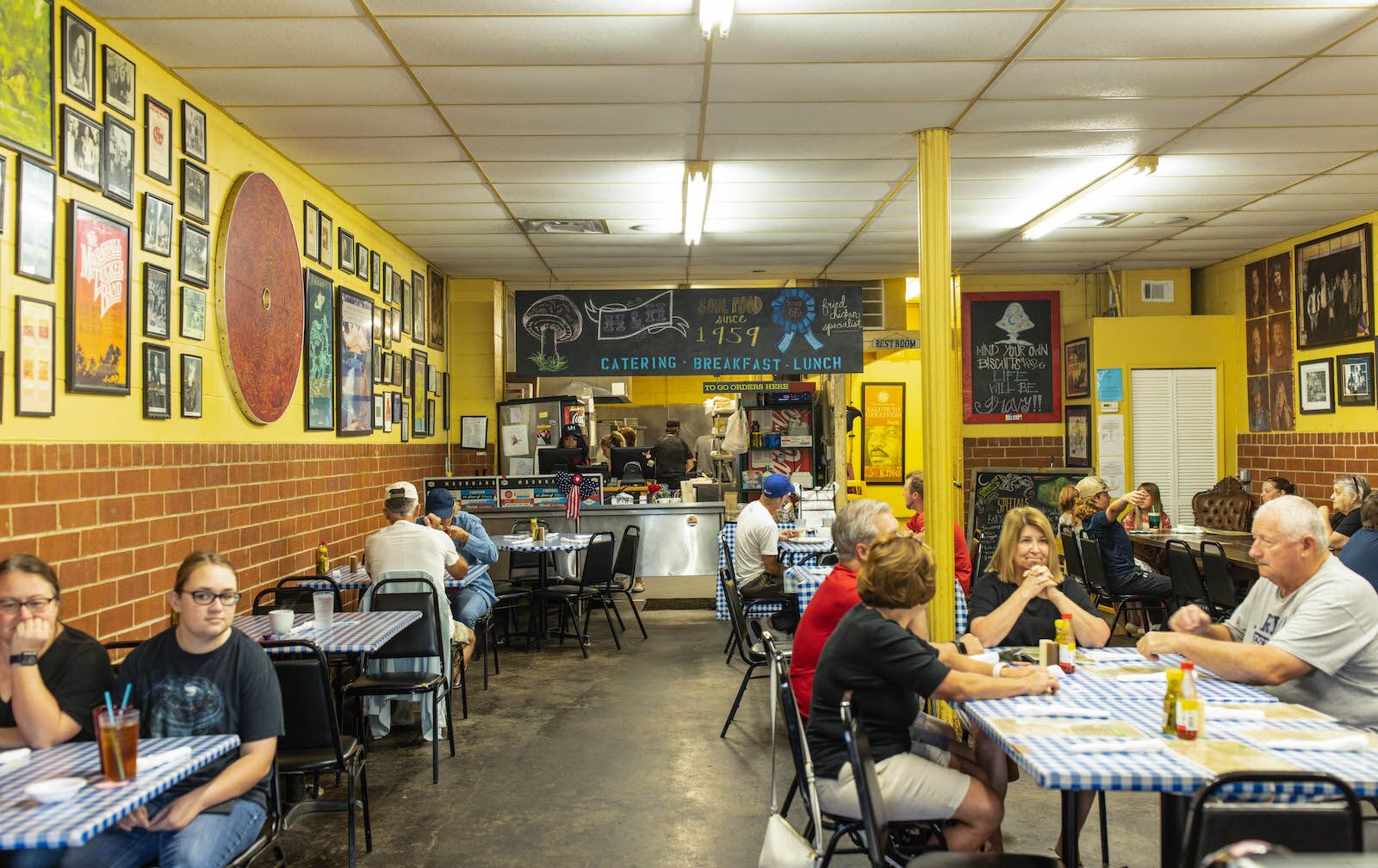 H&H Restaurant: This restaurant is a massive draw for Allman Brothers fans, as it was the regular stomping grounds for the band. The story has it that the original owners, two Black women, took pity on the struggling musicians and often provided them with free meals. Some of the Allman Brothers’s iconic branding is woven into the décor. I visited for breakfast and ordered the waffles with bacon and cheese grits.

Vibez: A brunch restaurant in downtown Macon, where you should try the Jett’s Jerk Chicken Spring Rolls, hot honey fried chicken with candied Brussel sprouts, and a cornbread pancake. 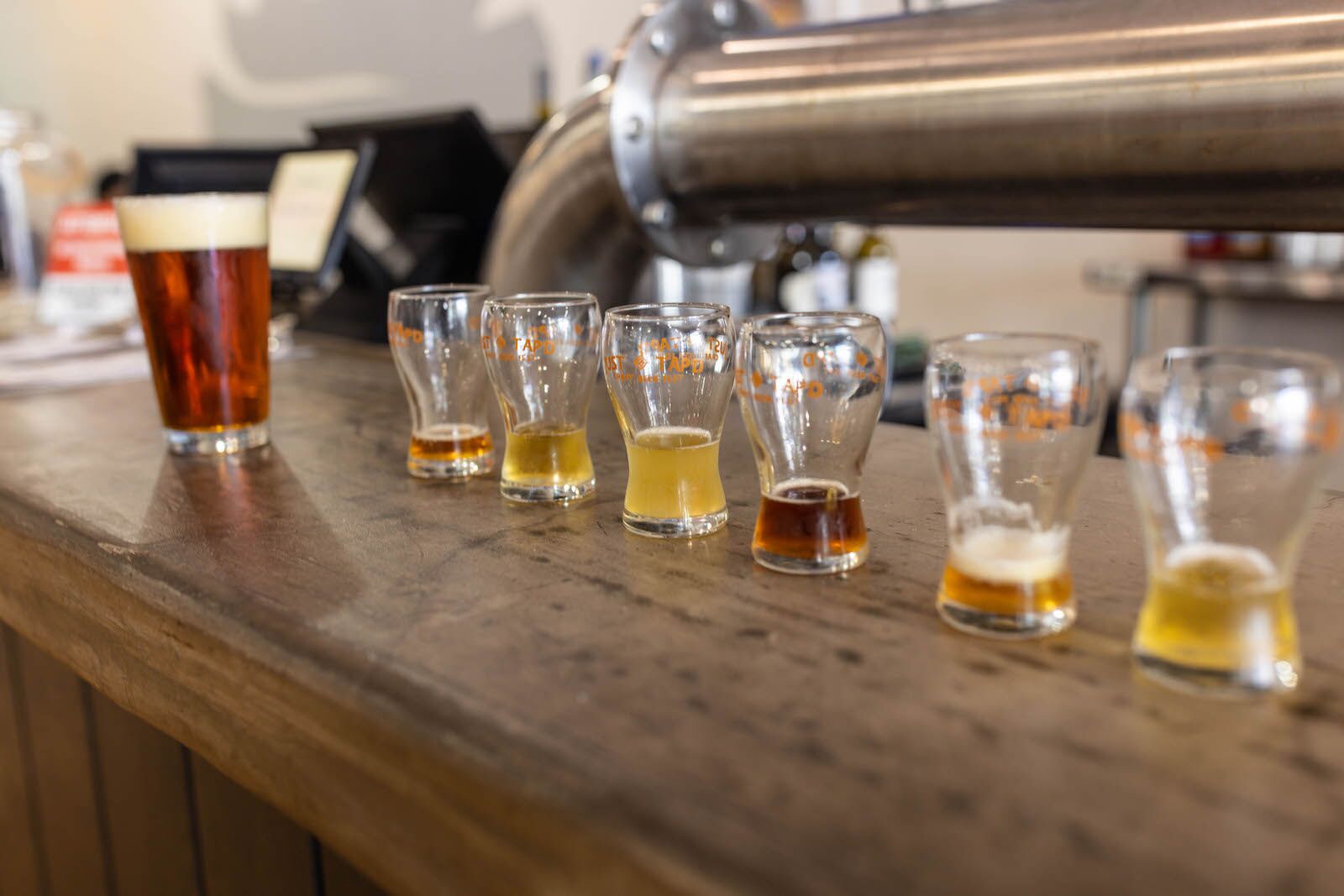 Ocmulgee Brewpub: This female-owned craft brewery and restaurant is popular among tourists and locals. As a beer enthusiast, I was stoked to try a flight of their crafted beer offerings. Although it’s known for burgers, I ordered a summer salad, which was delicious.

Decadent Dessert Bar: This dessert bar is located right next to the Taste and See Coffee Shop and is sure to satisfy your sweet tooth. The shop offers an array of cakes, pies, and gelato — I particularly enjoyed a ginormous slice of lemon cake.

Kinjo Kitchen + Cocktails: This restaurant serves up tasty pan-Asian fusion dishes. As I enjoyed a hearty bowl of pork belly ramen, my waitress discovered I was new in town and pulled up a chair to rattle off local lore and a litany of fun things to do in Macon. I scribbled the list on the back of a napkin and used it to get familiar with Macon’s more eclectic underbelly.

Oliver’s Corner Bistro: An uber-trendy Sunday brunch is served up at Oliver’s Bistro. Arrive early and with your appetite — patrons start queuing up about 20 minutes before the doors open. I scored a coveted spot at a booth near the front windows and devoured Oliver’s take on a classic French toast dish that comes with candied bacon and pecans. 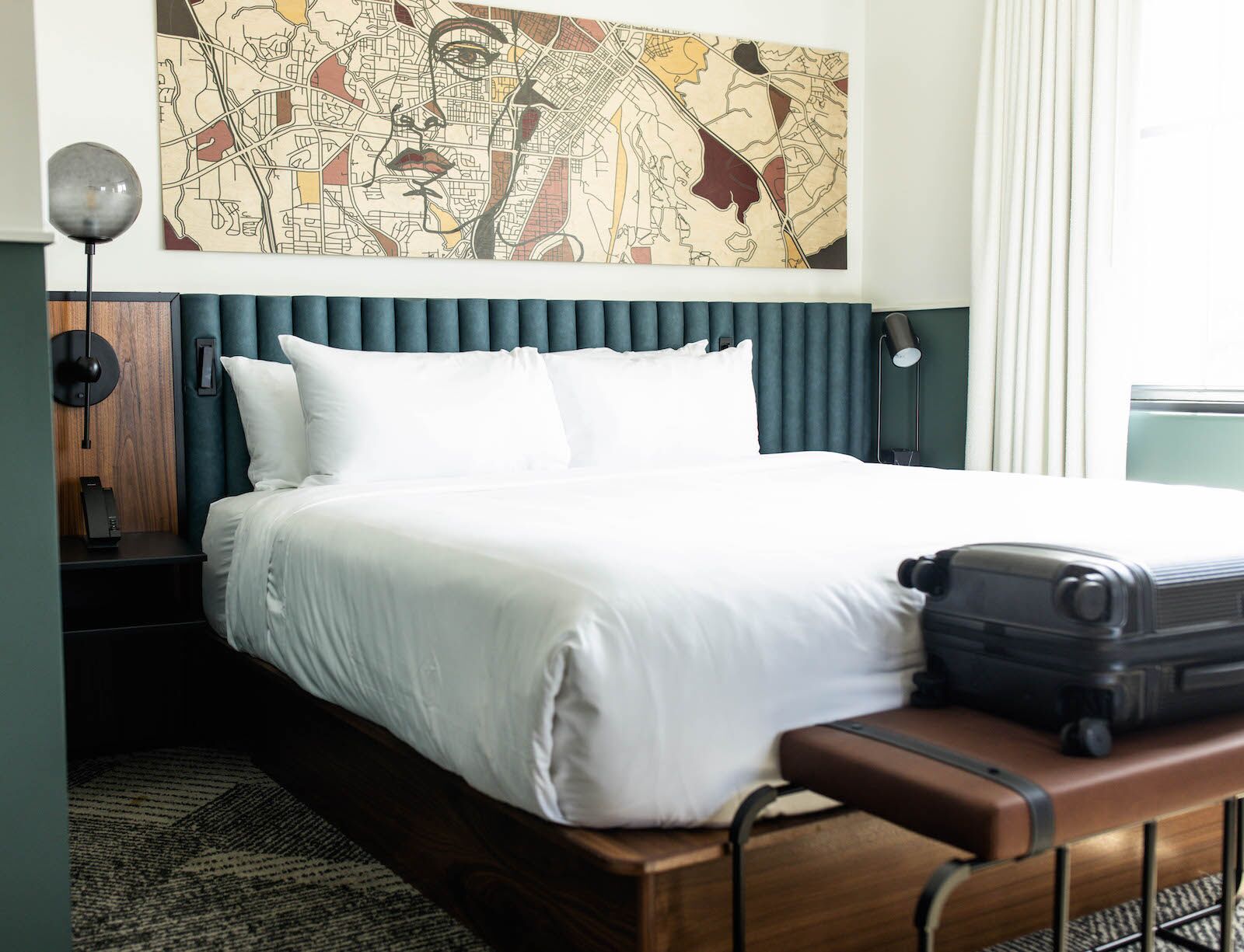 Hotel Forty-Five: Tucked inside an historic municipal building between Cherry and First Streets, this Marriott Tribute Portfolio Hotel is a 45-degree angled structure. The stylishly restored building is modern yet classic. The rooms are comfortable and there are no bad views with vintage-styled furnishes and preserved historic features like the former office directory and vintage mail chutes that can be spotted throughout the hotel.

Loom is the house restaurant of Hotel 45. I ordered a mouthwatering grilled New York Strip, which is normally served on a bed of arugula but I asked for sauteed collard greens instead. The steak, which is worthy of a superlative or five, was the best I’ve ever had. For a drink, Hightales Rooftop Bar weaves the inn’s musical theme into its signature cocktails named after famous hits like “Win, Lose, or Draw” by the Allman Brothers and James Brown’s “Got the Feelin.” Order your drinks at the bar on the sixth floor, then take the short stairs up to the AstroTurf rooftop overlooking historic downtown Macon.

How to get to Macon, Georgia

Contour Airlines has two daily direct flights to Macon from Baltimore. The flight is a little under two hours long. Visitors can also fly into Atlanta airport, one of the largest airports in the world, and make the hour or so long drive.

Macon is a walkable city if you’re staying in the downtown area. Some popular sites will require a cab or rideshare, depending on the location of your accommodations. Note that rideshare services are slow in Macon and many drivers come from nearby towns. Plan to wait 10-15 minutes for each ride.

FestivalsThis Georgia Town Is the Cherry Blossom Capital of the World. Here’s How To Best Experience It.
Tagged
Travel
What did you think of this story?
Meh
Good
Awesome