While social media would have you think that the Marriott Mena House in Cairo, Egypt is a new traveler’s haven that gives the best view of the pyramids, it’s been around for much longer. In fact, the Mena House dates back to the 1880s, when Europeans would spend their winters in Egypt to evade harsh weather conditions. The name “Mena House” was deemed by Professor A.H. Saya to be in honor of the first king referenced in the Tablet of Abydos — a list of 76 Ancient Egyptian kings found on the walls of the Temple of Seti I.

The Mena House likely would have gone through multiple owners in those first years, but in 1887 a wealthy European couple, Hugh and Ethel Locke-King, opened its doors as a hotel. They enlisted an English architect, Henri Favarger, to build the hotel out of the former structure. It wasn’t until March of 2015 that Marriott International announced it would manage the property.

The Mena House has seen visitors from all over the world, from Charlie Chaplin and Agatha Christie to Salma Hayek and Will Smith. Located just a stone’s throw away from the Pyramids of Giza, rooms with the best views have a picturesque backdrop of the pyramids in front of them. If you’re looking for a unique stay in Egypt, there’s nothing quite like the Mena House.

We hope you love the places we recommend! Just so you know, Matador may collect a small commission from the links on this page if you decide to book a stay.

The Mena House is one of the most picture-perfect properties I’ve ever been to. The property is very well manicured and takes you out of the desert and places you in a tropical oasis. Upon arrival, you’re greeted by staff who offer a golf cart to transport you the short distance to the front desk. 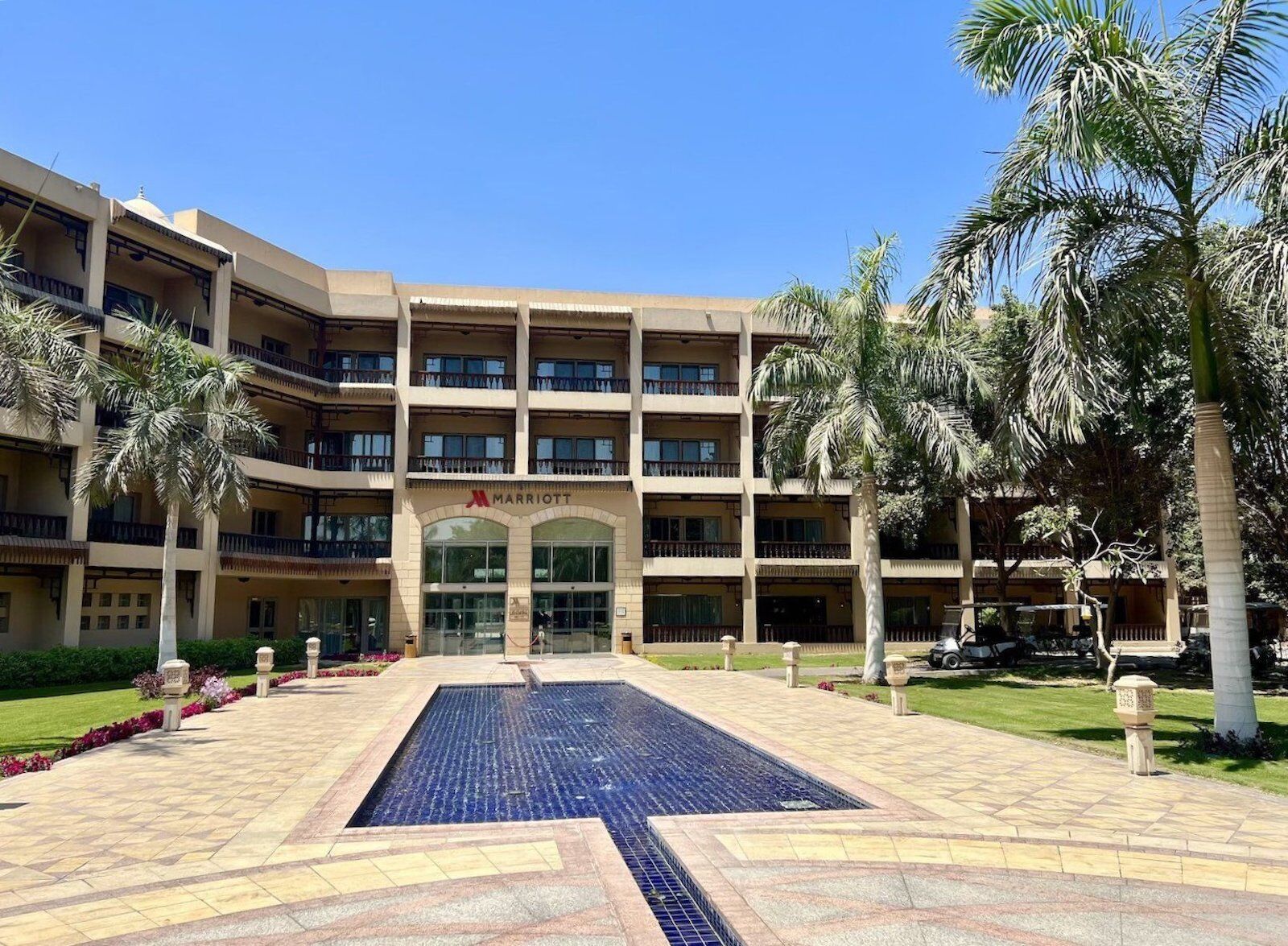 The hallways take you back in time with photos of various periods in Egypt’s history. It was only through heading to my room that I realized how delicate the hotel’s history is. The infrastructure of the rooms isn’t as up-to-date as you might expect. However, the rooms are very cozy, and I was able to get a first-floor view of the pyramids with a king-size bed and a balcony. The room was filled with all the necessary amenities, including cable television, a couch, a coffee/tea machine, and a fully stocked bathroom with a bathtub.

Many local guests come to the Mena House to dine at various times of the day, but especially in the evening. The hotel has four dining options. Alfredo is an Italian restaurant that seats up to 90 people and is open from 4:00 PM to 11:00 PM. The Moghul Room is an Indian restaurant that seats up to 45 people. It’s open for dinner from 6:00 PM to 11:00 PM. I would highly suggest getting a reservation for the latter if you’re interested in going for dinner. 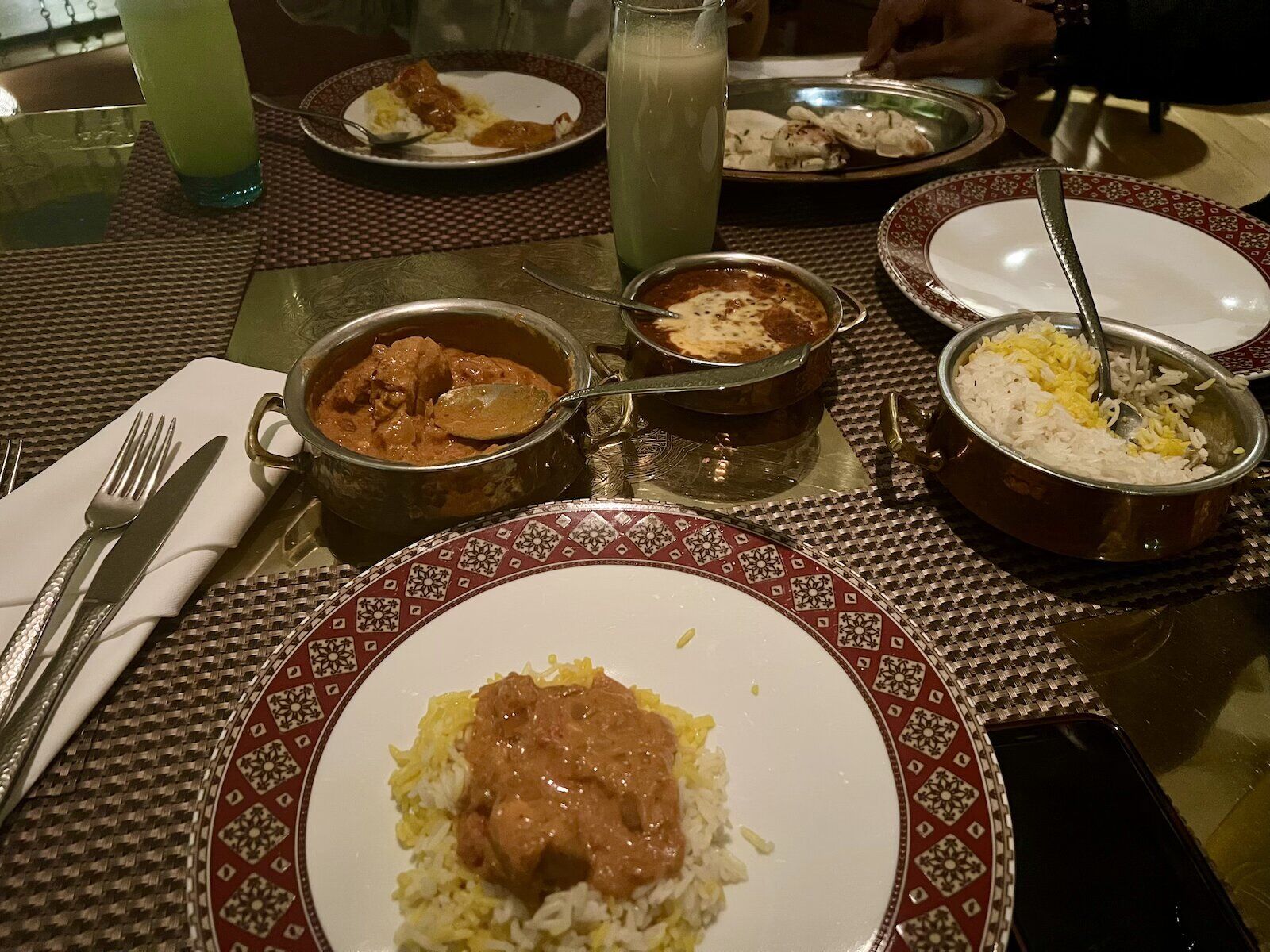 The Mena House also has a lobby bar called the Lobby Lounge. It’s open from 8:00 Am until midnight. However, the most sought-after dining is the all-day restaurant 139 Pavilion. The reason it’s highly favored by guests and visitors is that it gives you a front-row seat to a view of the pyramids and a beautiful pool-like fountain. When the temperatures are not too overbearing, it’s quite a majestic experience. I highly recommend reserving a table in advance because the outdoor seating closest to the pyramid view is taken first. 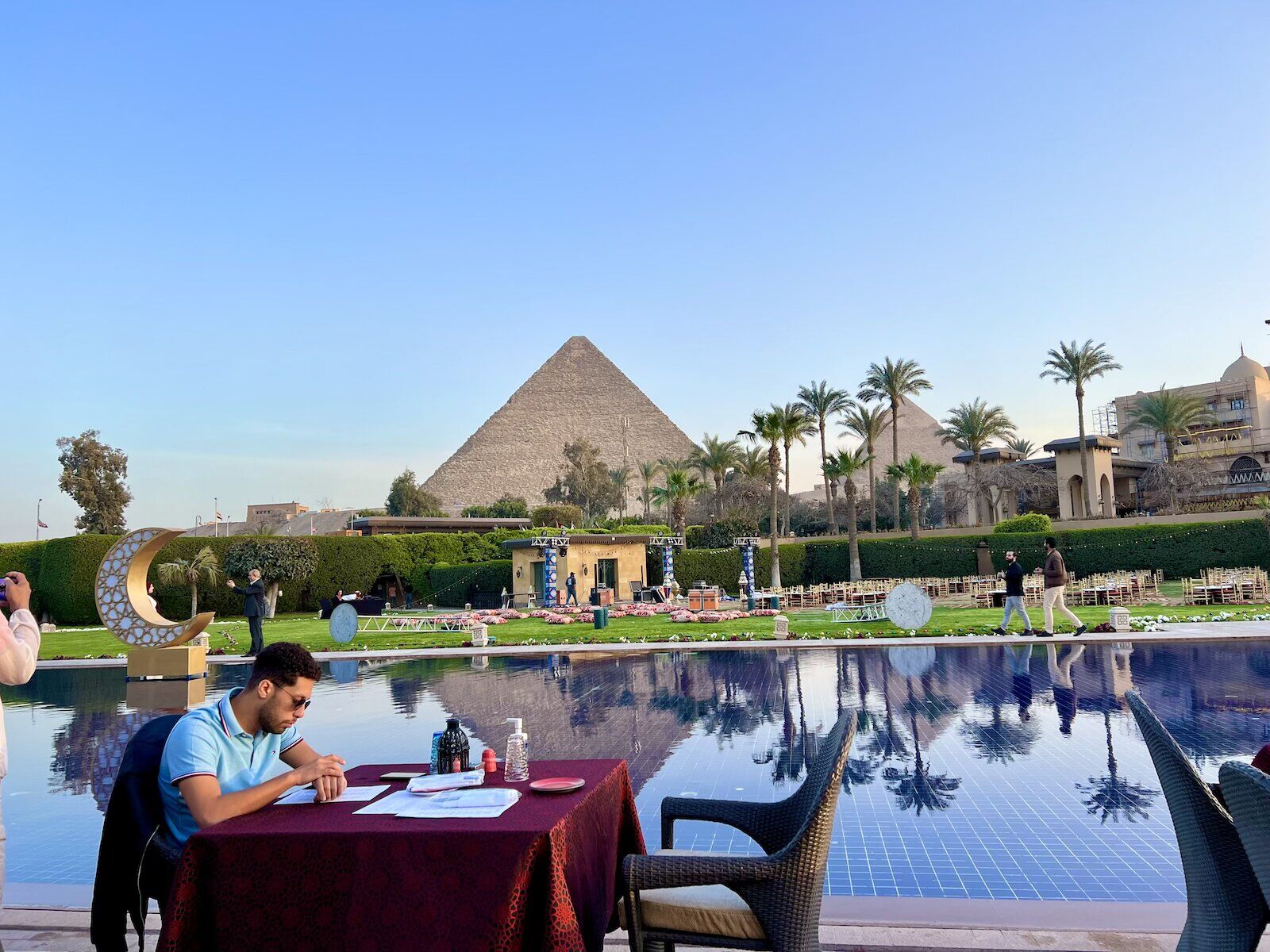 The Mena House offers a spa that’s open from 9:00 AM until 9:00 PM. The Saray Spa has internationally-trained staff who perform a variety of holistic treatments and therapies for guests. The hotel also has a fitness center that’s open 24 hours. One of the most beautiful areas of the hotel is the pool. It’s open from 8 in the morning until sunset, and has the most beautiful garden view with readily accessible lounge chairs and towels. During the winter months, the pool is heated. 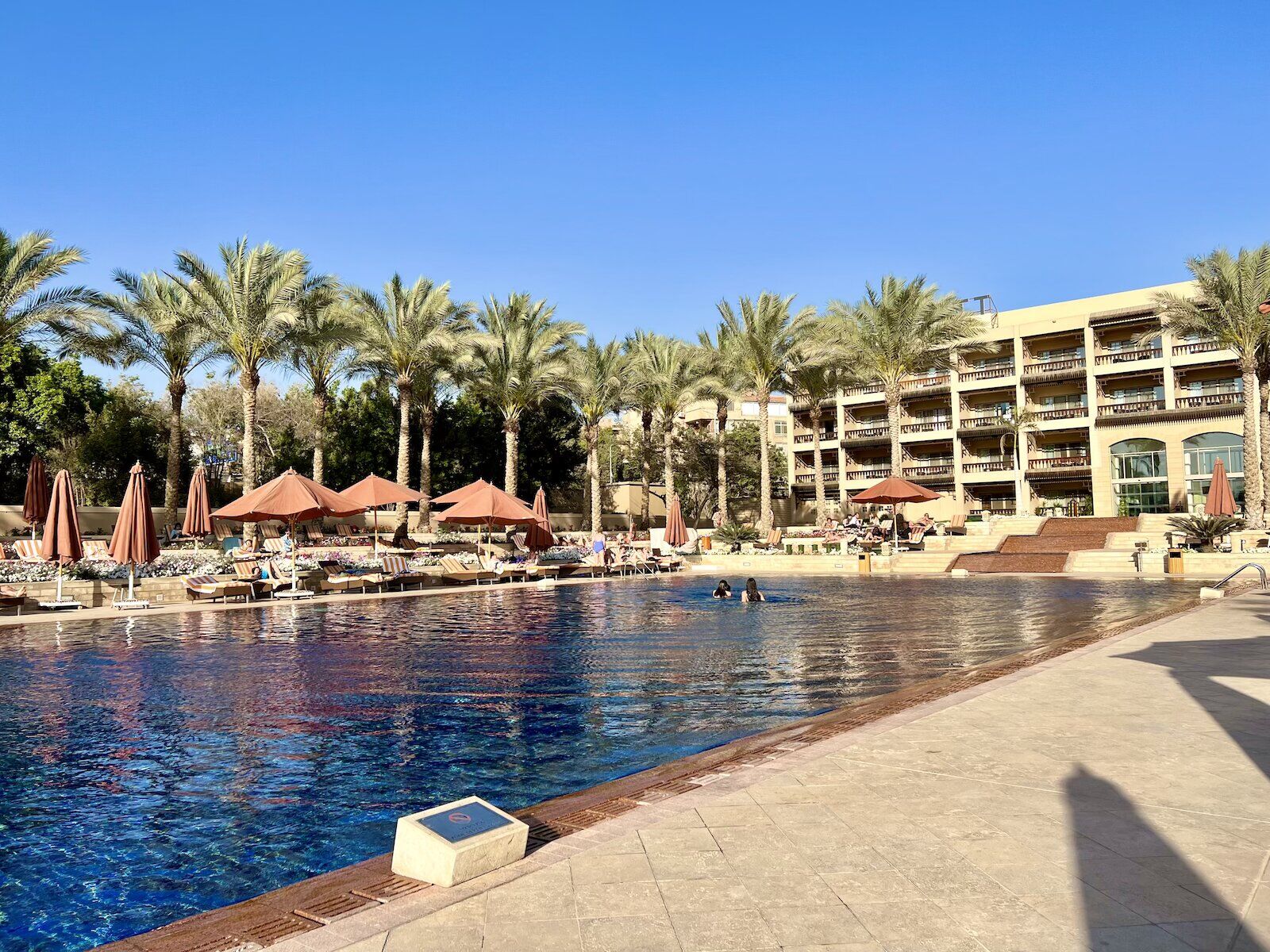 In addition to the on-site activities, you’d be a fool not to indulge in the off-site activities. The concierge can arrange sightseeing tours to the pyramids and the Sphinx, Sakkara, the Sound and Light Show at the Pyramids, and a trip to the Egyptian Museum of Antiquities. They will also arrange for visits to The Citadel, Khan El Khalili outdoor shopping bazaar, the Coptic Museum, and The Hanging Church.

All-in-all, The Mena House is worth the stay for the scenery alone. In comparison to the surrounding neighborhood of Giza, which is characterized by concrete buildings, a hazy view of the sky, and the loud sounds of horns honking and people yelling, The Mena House encapsulates peace and comfort. It’s an experience that will stand the test of time.

CultureAs Tourism in Egypt Rebounds, It’s Time To Plan a Trip To the Lesser-Known Sites of Cairo and Luxor
Tagged
Epic Stays Cairo, Egypt
What did you think of this story?
Meh
Good
Awesome