Fast cars and A-listers who yacht in for the day are par for the course in Monaco. The little principality on the French Riviera holds the record for the most millionaires per capita, due to its status as a tax haven. Signs of wealth are everywhere: Lamborghinis and Ferraris are parked outside Monte Carlo’s famous casino and the posh Hôtel de Paris. And visitors gawk at them the way they might gaze at the Matterhorn, or the Eiffel Tower. In other words, glitz is part of the landscape.

However, existing parallel to this is a different Monaco; the Monégasque’s Monaco. The actual citizens of the principality are a tiny fraction of the population as a whole: Of nearly 40,000 people living there, about one fifth hold Monégasque citizenship — and these Monégasques are often lost in the glamour of it all. You can usually identify the locals by their Italian-tinged accents. They’re the ones who tend to live in the pastel-colored Old Town or the Belle Epoque villas in the La Condamine neighborhood, away from the unsightly and imposing high-rises of Monte Carlo. They also know the hidden and quiet corners of Monaco’s four districts: Old Town, La Condamine, Fontvielle, and Monte Carlo. Their side of the principality is certainly worth discovering: There is a lot of charm and authenticity to be found in what can seem like a paradise of artifice — and it can all be enjoyed on a budget. 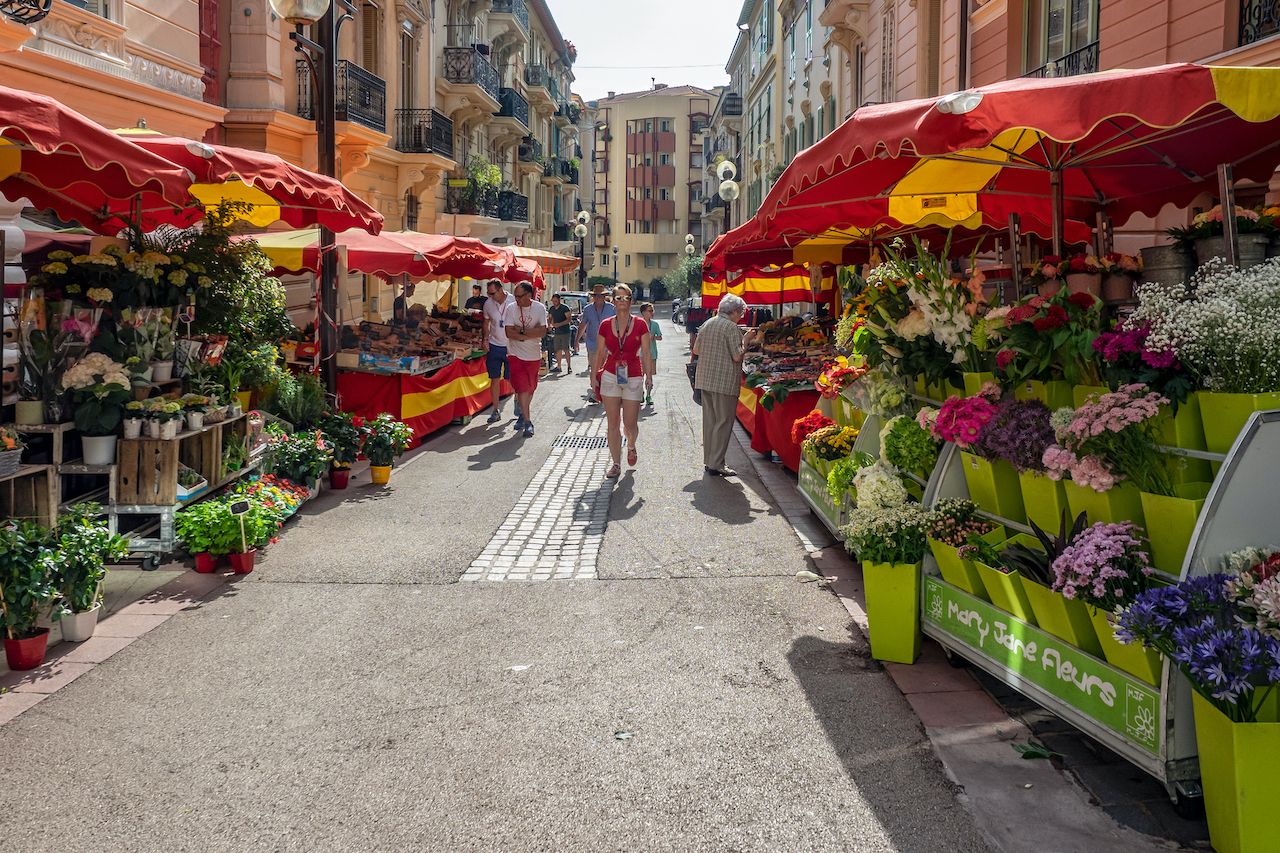 The heart and soul of Monaco is the daily food market in La Condamine neighborhood situated on the Place d’Armes, just under the ancient ramp leading up to the Old Town. Every morning fruit and vegetable vendors set up their stands, shielding themselves from the hot sun with yellow and orange umbrellas that add an extra touch of color to the stacks of vibrant regional produce. Inside the market hall you’ll find fishmongers, butchers, cheese makers, and traiteurs selling prepared regional specialties. Join locals at the bar of one of the market cafes — they’re the ones sipping an espresso, or, sometimes, a morning Pastis, gossiping and sharing their afternoon plans which usually include a big lunch and long nap. Don’t leave without trying the best of Monégasque street food such as “barbagiuan,” a fritter stuffed with Swiss chard and ricotta, and “pissaladière,” pizza topped with caramelized onions and anchovies. Chez Roger’s stand is the place to try these, as well as the ultimate Riviera snack, “socca,” or chickpea pancake. Roger makes it just right, slightly spongy in some parts and charred in others.

Go sun yourself on a secret beach 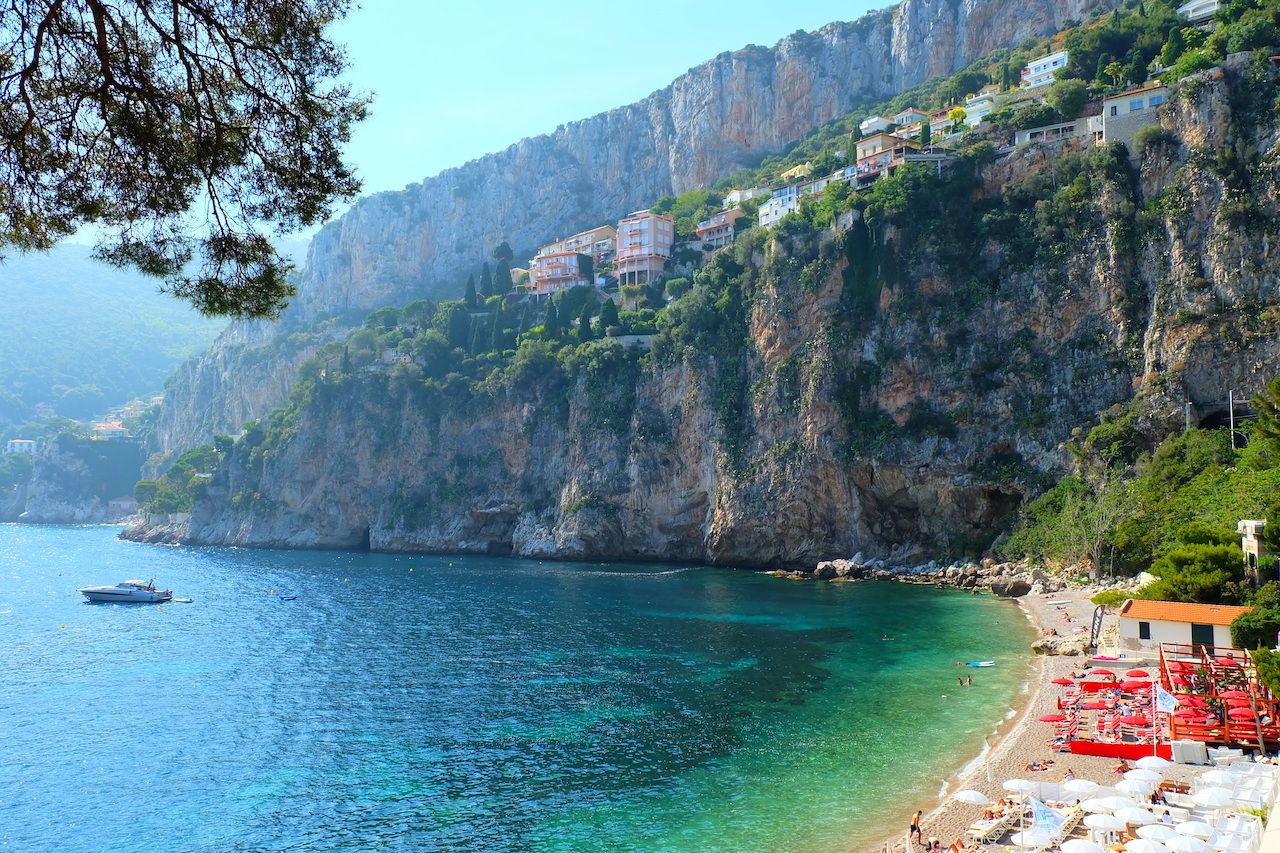 Hiding in Cap D’Ail, a small village just over the border in France, is the ultimate secret Riviera beach. To get there, you can hike the Sentier du Cap D’Ail, (the Cap d’Ail Trail), which locals call the Monégasque’s Promenade. The 3.5-kilometer coastal walk is lined with fragrant parasol pine and orange trees, as well as pretty Belle Epoque villas. At the end of the trail is a set of 153 stairs. Climb down, and voilà: You’re at Mala Beach, a perfect, quarter moon-shaped stretch of soft sand, where the Mediterranean is a particularly turquoise.

Locals like to come for an early morning or late afternoon swim when it’s not too crowded. But even at peak beach time the vibe is low key. Mala is also surrounded by seaside cliffs which beckon the occasional diver. There are two on-site private beach restaurants — Eden Plage and La Reserve — where you can have lunch, or rent a beach lounger and umbrella. Monaco does have its own public beach, Larvotto Beach, but it’s rocky and not nearly as charming.

Each of Monaco’s four districts have locally loved eateries. Generations of Monégasques have been going to the tiny, family-owned Polpetta in the Old Town for Italian classics. Stars ‘n Bars, an American-style sports bar by the Port, is a gathering spot for Monégasques, including members of the princely family, for buffalo wings, burgers, beer, and televised sports games. The atmosphere is very relaxed, i.e. the opposite of what you expect in Monaco. Le Tip Top is a low-key, inexpensive pizzeria and restaurant that’s particularly atmospheric at 3:00 AM when party-goers have poured out of the clubs. Everyone in Monaco, including former Formula One drivers like David Coulthard, goes there.

If all you want is a flat white, the local branch of a certain ubiquitous coffee chain has you covered. While the drinks are run-of-the-mill Starbucks beverages, the Monaco branch’s setting and scene is anything but standard. The patio area of the coffee shop has great views of the Mediterranean, and the clientele always accessorize their carry-out cup with the latest designer handbag or expensive watch. 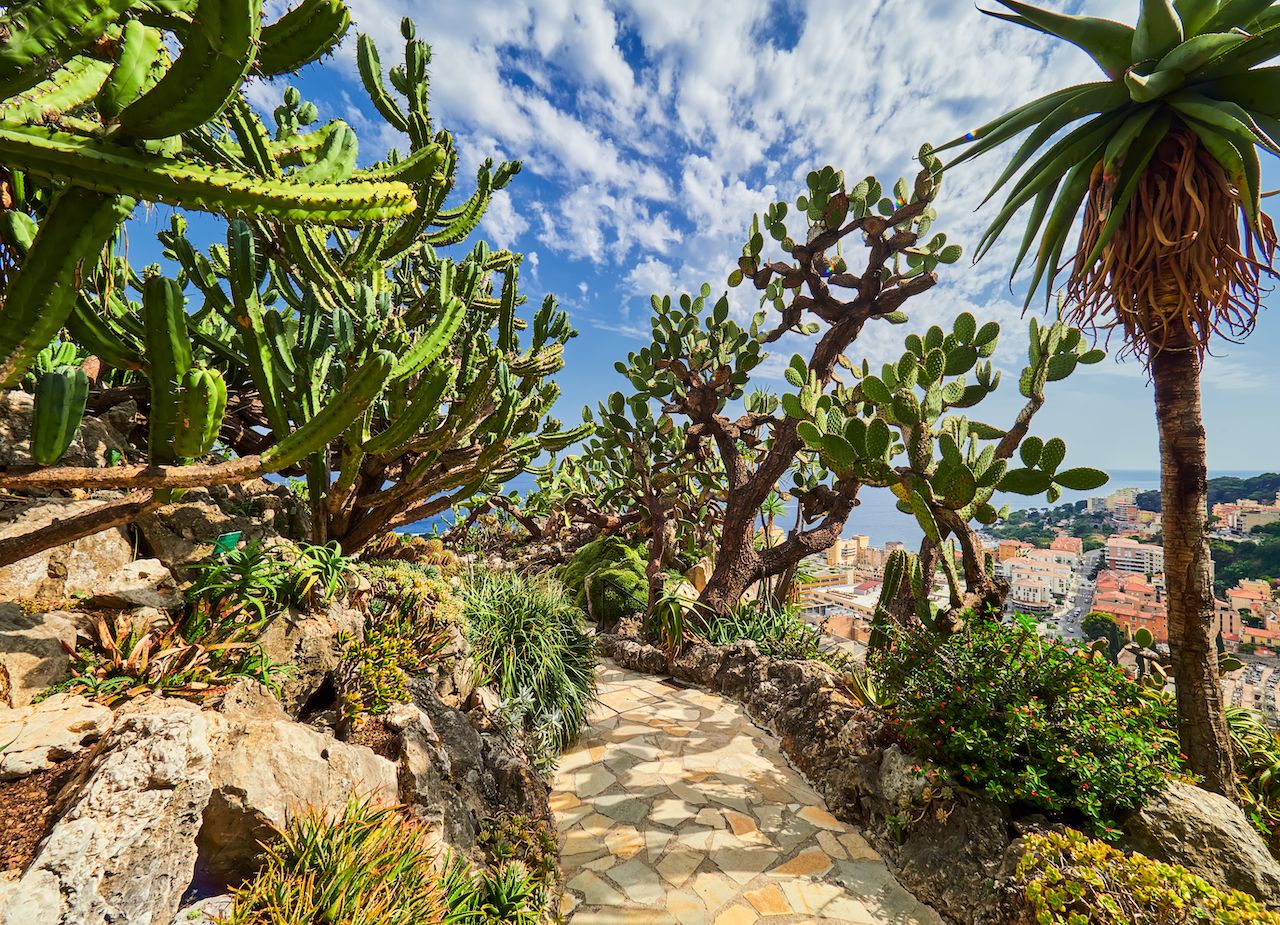 In such a small and famously densely packed micronation there are a surprising amount of dedicated parks and greenspaces. These parks are one of the most delightful ways to spend time in Monaco. Locals like to recharge their batteries at the peaceful Jardin St Martin, in the Old Town, a long sliver of a garden bordering the sea. The garden dates back more than two hundred years; it was created to provide work for residents during a famine. They planted Mediterranean pines and myrtles and pistachio trees. Later, lush exotic species from around the world were introduced. The Princess Grace Rose Garden in the Fontvielle quarter was conceived by Prince Rainier III in memory of his wife Princess Grace, and opened two years after her death in 1982. It’s since expanded to a luscious English-style garden with eight thousand rose bushes representing 300 varieties including one that bears the princess’s name.

There are also ancient olive trees to sit under when you need a break from the hot sun. At the Jardin Exotique, succulents brought from Mexico in the 19th century seem to burst out from craggy rocks and tall cacti compete for height with the principality’s skyscrapers. The garden was built into a cliffside and you can also take in splendid views over Monaco. If you need a moment of zen in the fast paced principality head to the Japanese Garden near Larvotto Beach. Landscape architect Yasuo Beppu was faithful to the principles of Japanese garden design, incorporating bamboo hedges, waterways, bridges, and trees. Koi swim peacefully in a pond among water lilies and lotus flowers. A traditional teahouse next to a small waterfall is waiting for you when you want to sit down for a drink.

Do some luxury shopping while staying on a budget

If you want something fancy to wear or take home then you’re in luck: The mega rich have to do something with the luxury labels they wouldn’t be caught dead wearing twice. So surmised Swedish expat Helen Rimsberg who opened Le Dressing, a designer consignment store full of once-worn luxury labels, where Monégasques in-the-know shop at. Expect a warm welcome and boutique crammed with highest end (and authenticated) labels at, on average, a third of their original price. More second-hand glam is available at the Boutique dur Rocher, a store selling beautiful crafts made by locals, homeware and antique toys, as well as recycled items from the fancy balls Monaco is known for; chic tablecloths from the Bal de La Rose, for example, were recycled into face masks and tote bags. Profits from the shop, which was founded by Princess Grace, support local charities.

Sopranos and soccer provide much better entertainment than celebrity-spotting 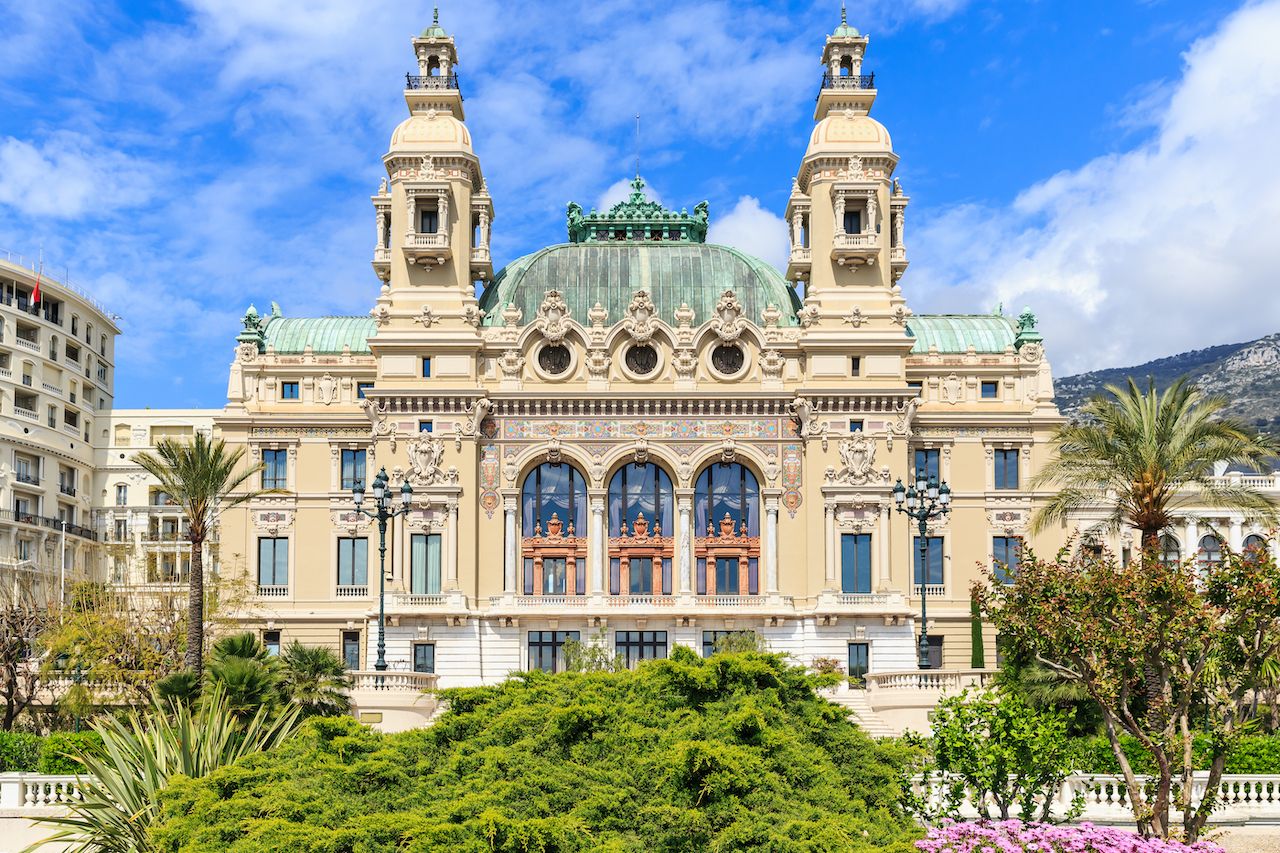 While the opulent opera house, designed, like the one in Paris, by Garnier, is definitely in the glitzy category (it’s even in the same building as Monte Carlo’s famous casino), a night of high culture shines a light on Monaco’s history of promoting the arts for everyone. A larger than usual chunk of Monaco’s state budget goes to the arts. As a result, tickets to concerts and ballets are subsidized and can be had for very reasonable prices. Watch the Ballets des Monte Carlo or the Opera de Monte Carlo in the Opera’s splendid gilded theater. Similarly, you can get tickets to the Monaco Philharmonic’s outdoor concerts in the courtyard of the Prince’s Palace (These are harder to score but worth a try). Also subsidized is the AS Monaco football team, part of the French Premiere League. Though soccer enjoys large popularity in Monaco, there are almost as many seats at the Louis II stadium as there are citizens, so it’s rarely full and generally pretty easy to get a ticket for a match.

When the South of France gives you lemons, make lemonade 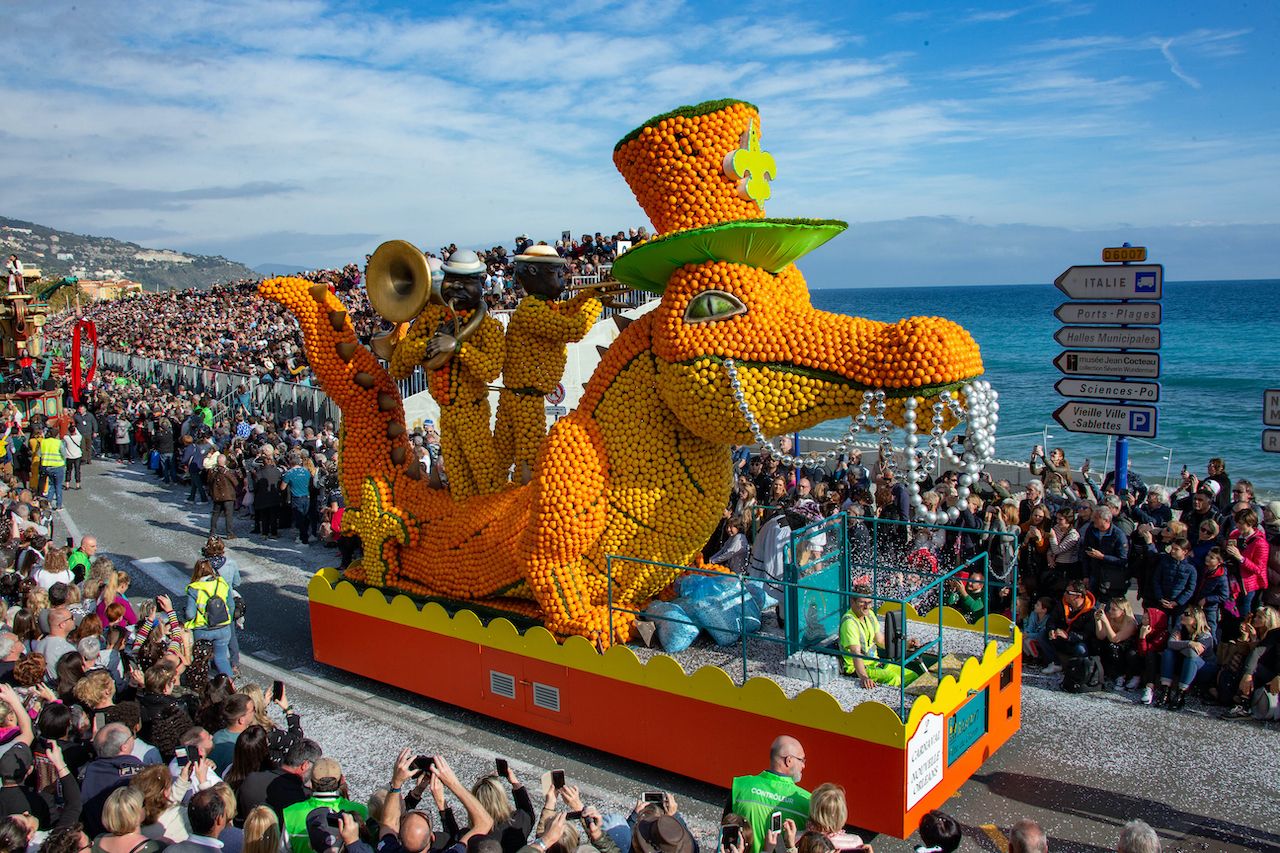 Every species of food and flora seems to get a designated festival in small town France. In this neck of the woods, it’s the lemon that’s celebrated in the neighboring town of Menton (the last stop before the Italian border). Menton is the lemon capital of Europe and La Fete du Citron held every mid-February is a charmingly cheesy affair. All the floats and sculptures present at the carnival are created from lemons and oranges and the scent of citrus flora fills the air. The citruses used in the floats aren’t local. They come from Spain; Menton isn’t known for the quantity of lemons but their quality. If you aren’t in town during the festival it’s still worth a jaunt over to visit the special lemon orchard, La Citronneraie, that these quality lemons are grown in. The Menton Tourist office can set you up on a tour.

EntertainmentThe Ultimate Guide To Vacationing in Monte Carlo Like James Bond
Tagged
Budget Travel Travel Monaco
What did you think of this story?
Meh
Good
Awesome

The Ultimate Guide To Vacationing in Monte Carlo Like James Bond

Dots on the Map: Tiny Nations and Micronations