Even for those who love books, a good library is usually not one of the most sought-after hotel amenities. But if you’re on vacation, or even traveling for business, sometimes it’s nice to have a handy resource for downtime reading material or just a place to escape the chaos of a big work trip or family vacation. Though they’re not as popular as hotel gyms, hotel libraries are still becoming a point of pride for many properties around the world. Here are 11 you should, obviously, check out. 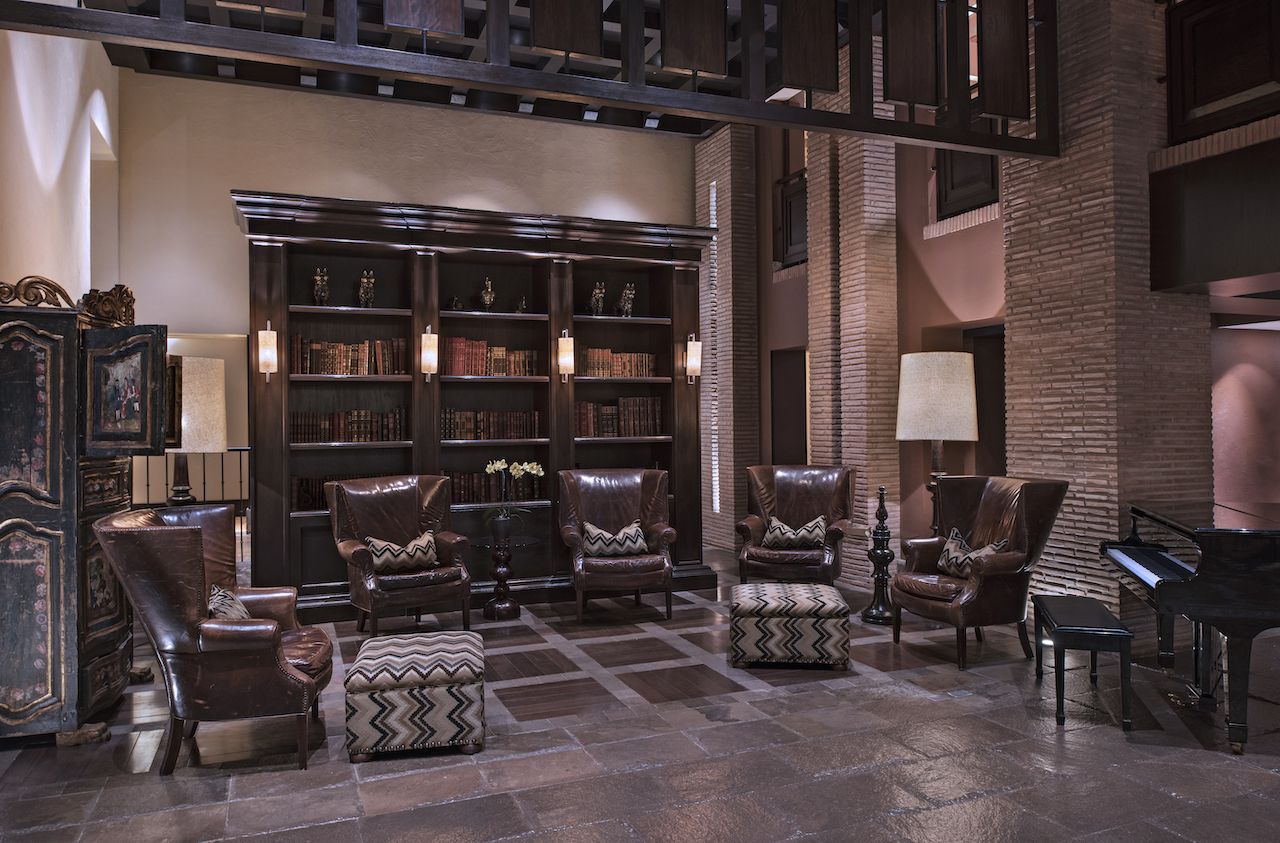 Don’t ever say luxury hotels with corporate name plates don’t give you a sense of place. This JW Marriott in the heart of Inca country is a converted 16th-century convent that still has walls from before the Incas’ time and countless historical artifacts. The library is almost a museum in and of itself, where in addition to books like Don Quixote and Uncle Tom’s Cabin, you’ll find floors from the ancient Killke period and hand-woven furniture from local Andean people. 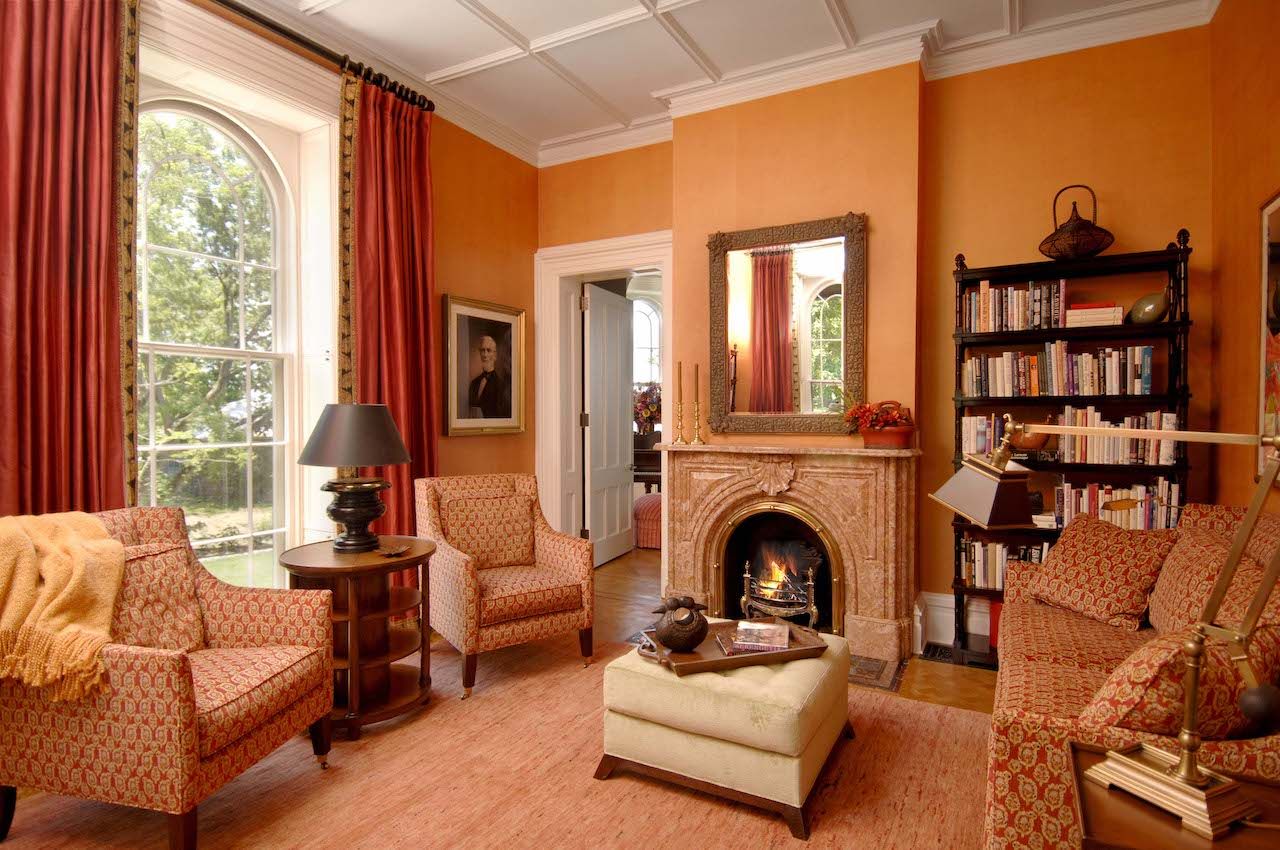 After a taxing day of wine tasting in the Finger Lakes, it’s nice to retreat to a cozy library and enjoy a bottle of something you bought with a book. At the E.B. Morgan House you can sit back by the marble fireplace in the stately library filled with books from the personal collection of American Girl Doll’s founder Pleasant Rowland. These volumes include French-language art books and a book of woodcut images from Aurora resident and famed illustrator J.J. Lankes. 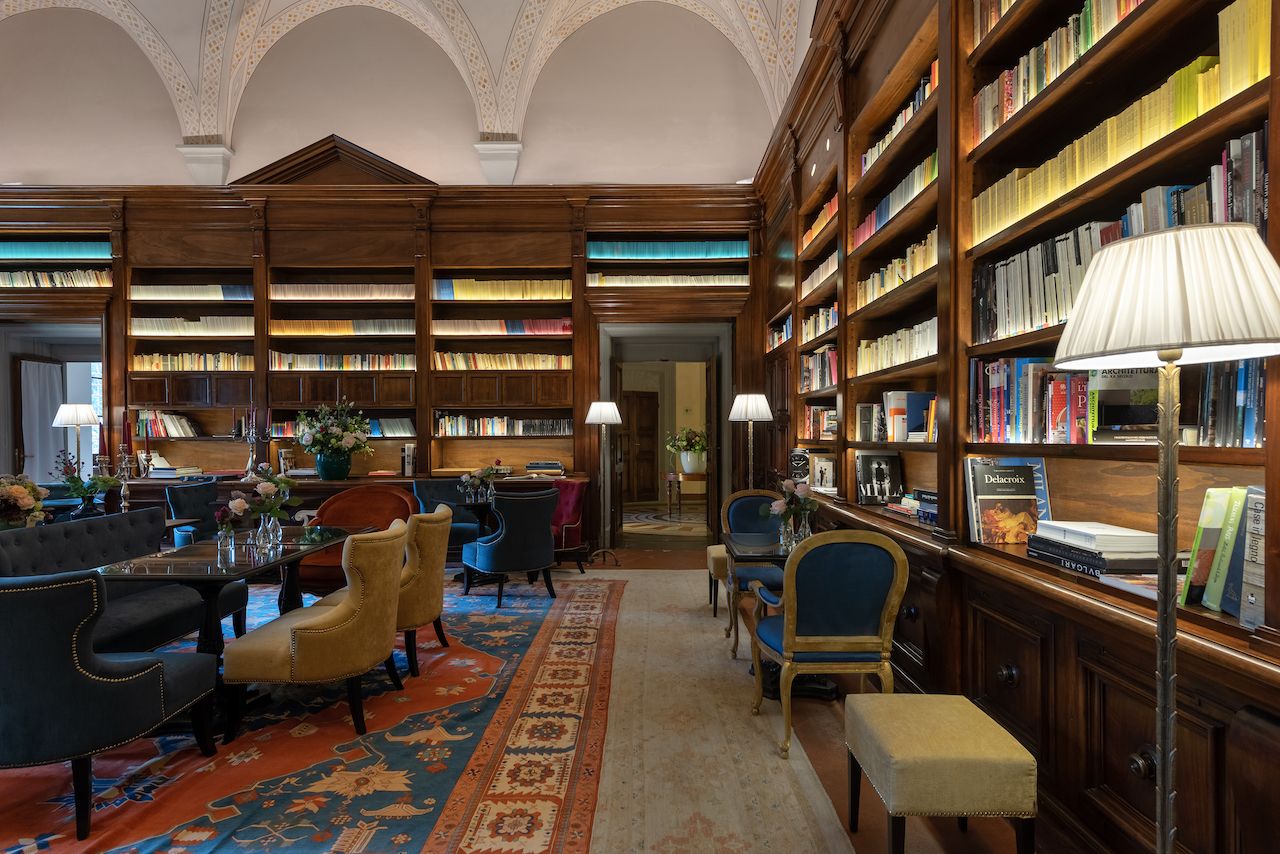 It’s almost like starring in your very own game of Clue — minus the murders, hopefully — when you gather with your friends in the hidden library of this restored 15th-century villa. If you can tear your eyes away from the sweeping view of the Tuscan countryside, you’ll find rich, dark leather furniture set under glowing candelabras and over 4,000 books. The wood-paneled walls and arches on the ceiling make Il Salvatino’s library the picture of Italian class and culture. 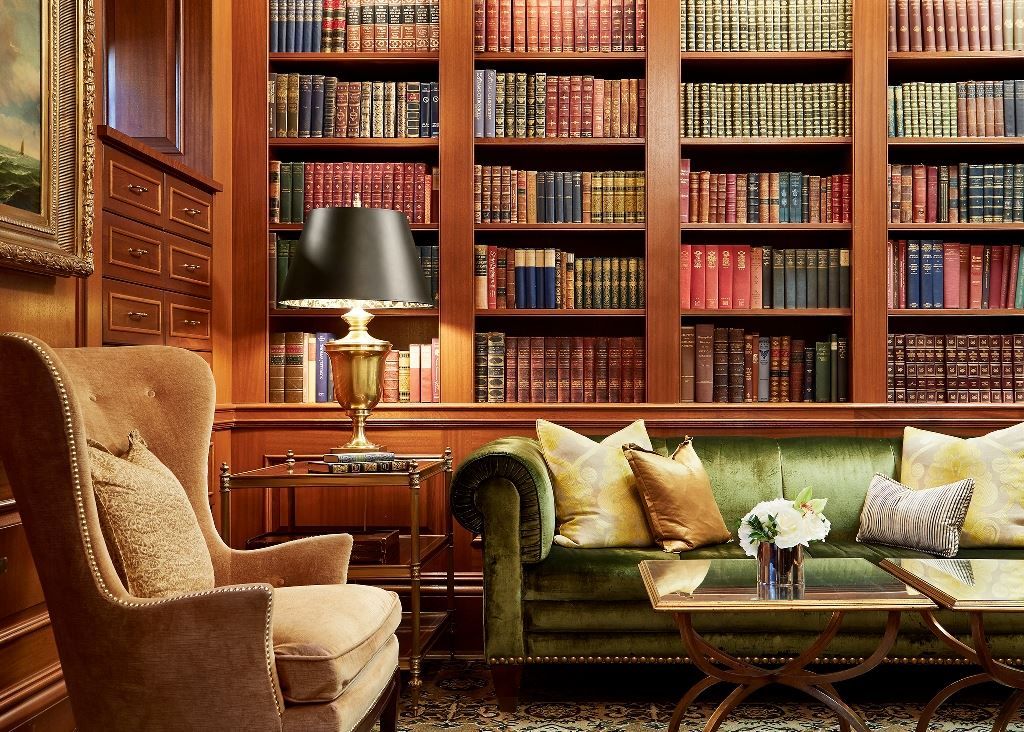 America’s most stately hotel library is at The Jefferson, where the leather-bound books are a compilation of works on Thomas Jefferson’s favorite subjects. Velvet sofas and ornate rugs fill the room, giving the feeling of reading in an 18th-century mansion, just a lot warmer. You can also complement your book with a craft cocktail from Quill, The Jefferson’s renowned cocktail bar nearby. 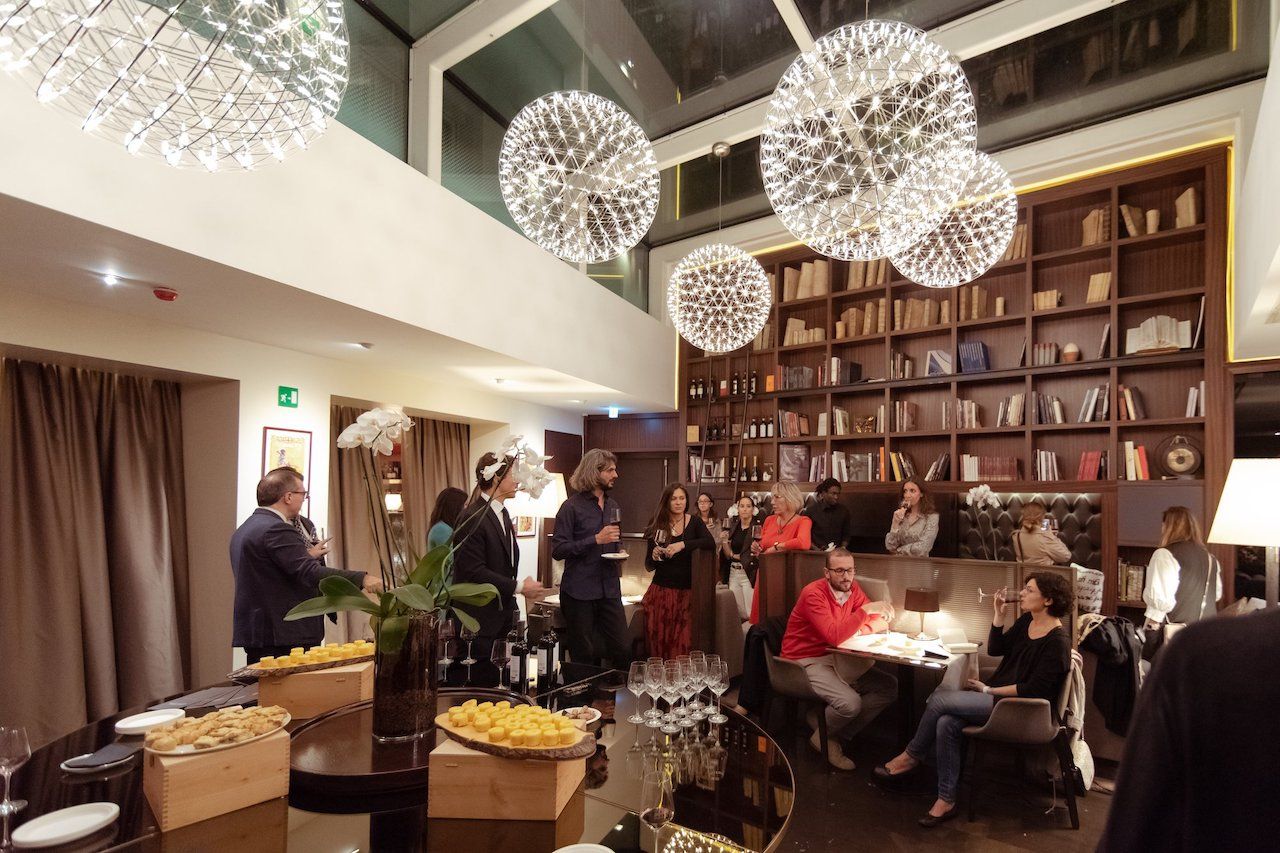 The Hotel Milano Scala is an opera-themed hotel in the heart of Milan’s trendy city center that has plenty of relaxing elements, from its rooftop garden to its views of the famous Duomo Cathedral. But even the lobby here oozes refined culture, with bookshelves stretching from the floor to the skylight, and leather-bound walls to relax against with a good novel. 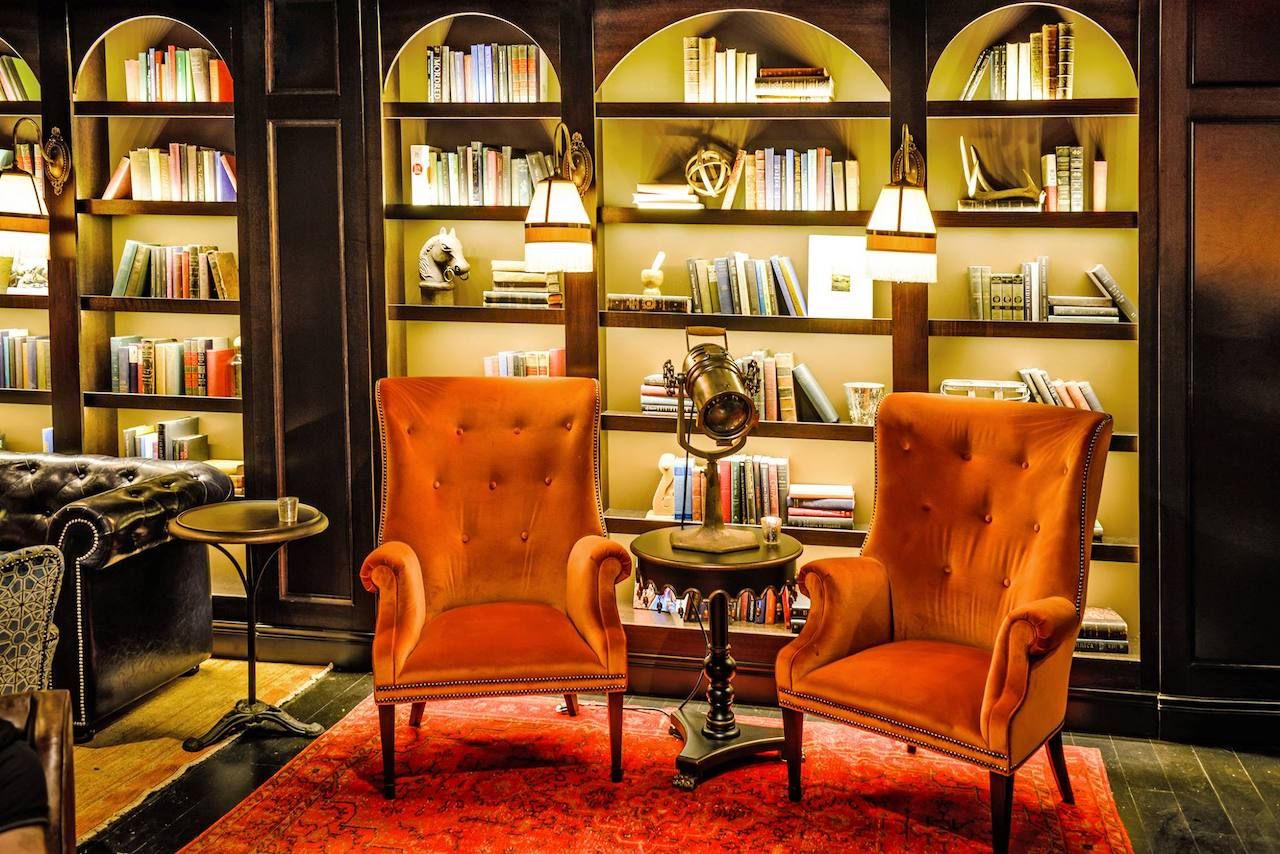 If you’re one of those people who’s a sucker for hidden anything, prepare to have your mind blown by the library at Le Méridien Chambers in Minneapolis’ theater district. To find the library, you must first discover the hidden staircase in MARIN, the hotel’s restaurant. Follow that downstairs to The Library — which is not an actual library but rather a secret underground bar which serves all sorts of Prohibition-era cocktails. Inside that bar, you’ll find big mahogany walls and plush armchairs, with books on the wall behind. It’s a long way to go to find something to read. But it’s still probably better than whatever the Gideons left in the nightstand. 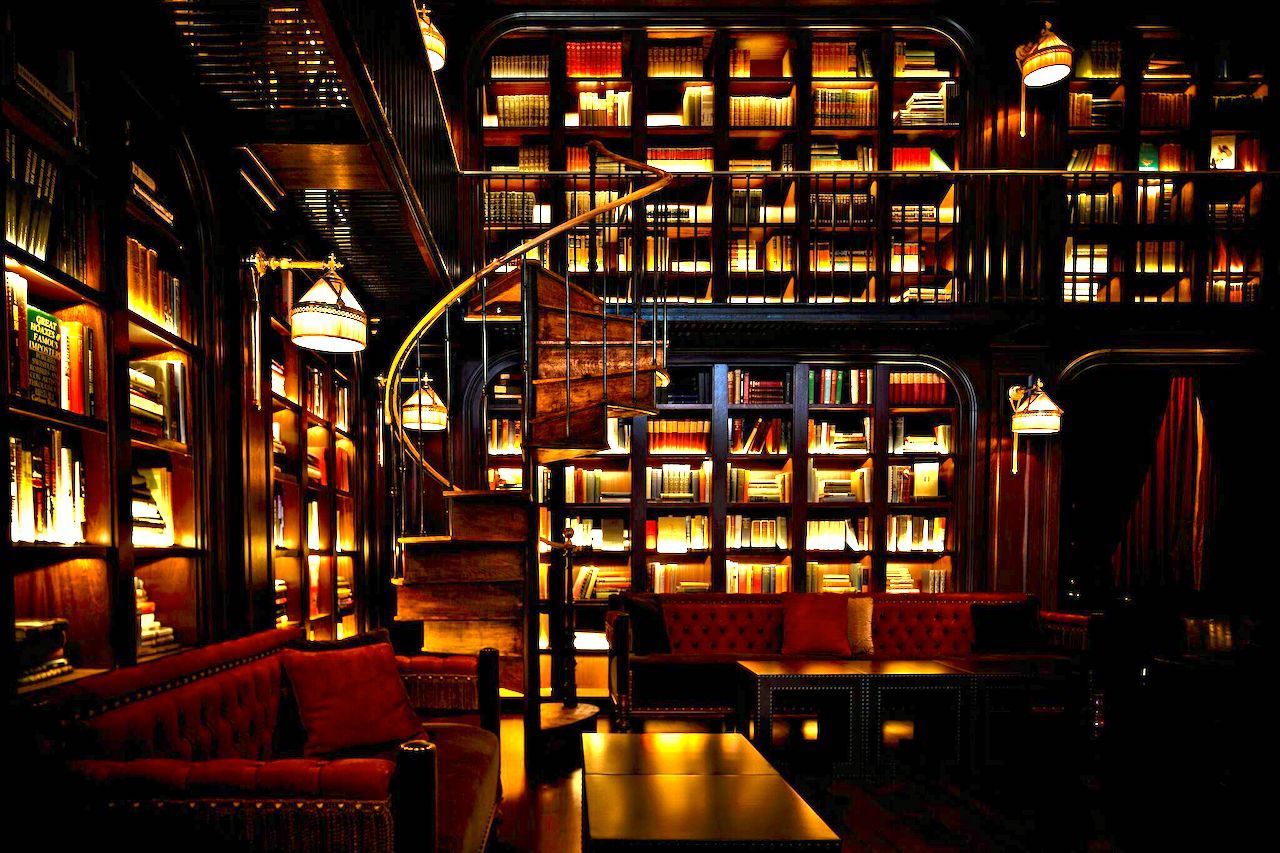 Libraries with spiral staircases adorned in dark-brown woods are usually reserved for Irish universities or, at the very least, trendy American cocktail bars. But the library at New York’s NoMad is big on these kinds of details, with a staircase imported from France and custom-made furniture to sit on. You’re welcome to peruse any of the books on the shelf, which cover everything from New York history to music and cocktails. And if the reading inspires you, you’re also welcome to order a drink delivered straight to your couch. 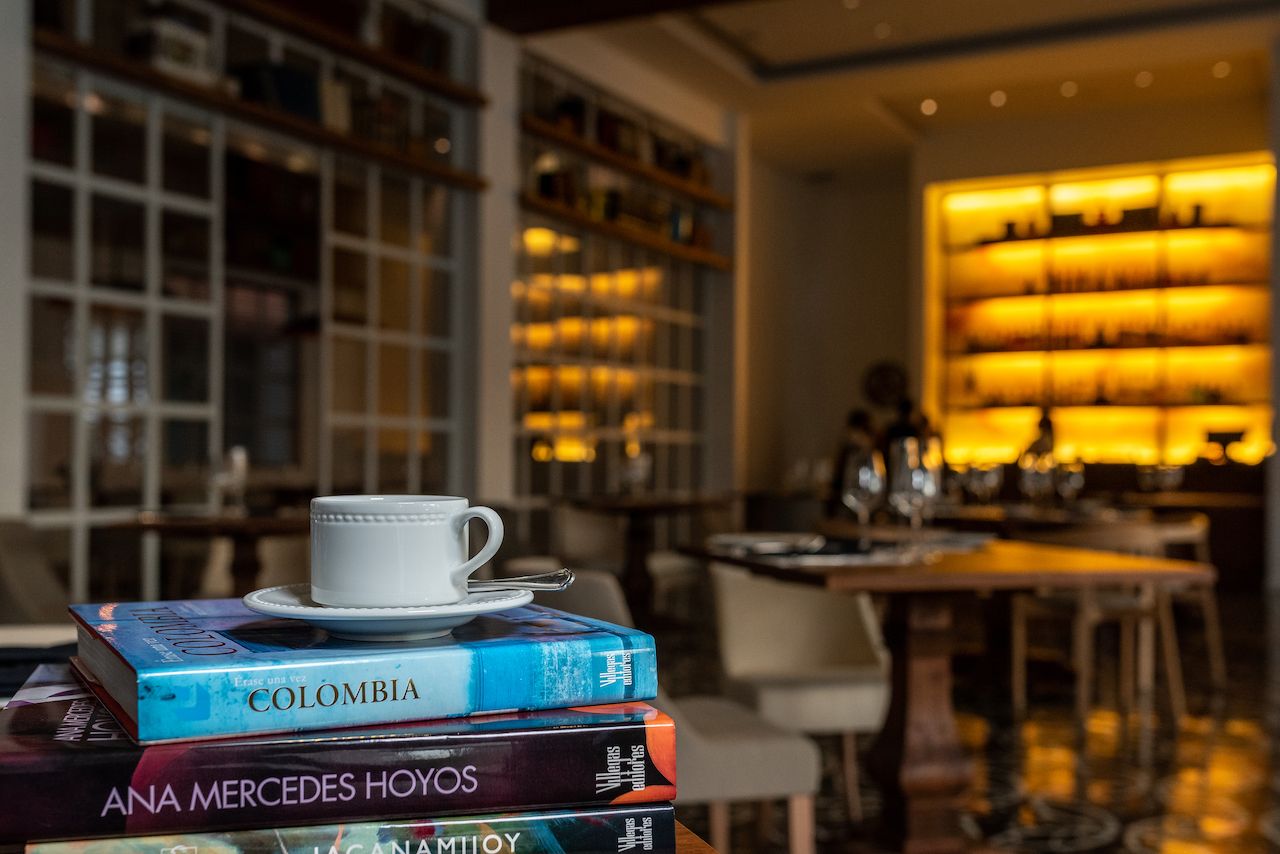 Eating in a library is usually the sort of thing that gets you a stern dirty look from the bundled-up lady behind the circulation desk, but not at Biblioteka, the library-inspired restaurant at the Conrad Cartagena. In addition to serving up all varieties of international food — under shelves of books from around the world — the restaurant also hosts literary programs. Colombian Corner allows guests to peruse local authors’ works while drinking Colombian coffee. There’s also the Libros y Licor book club, where guests explore Gabriel Garcia Marquez’s house while learning about his life in the city. 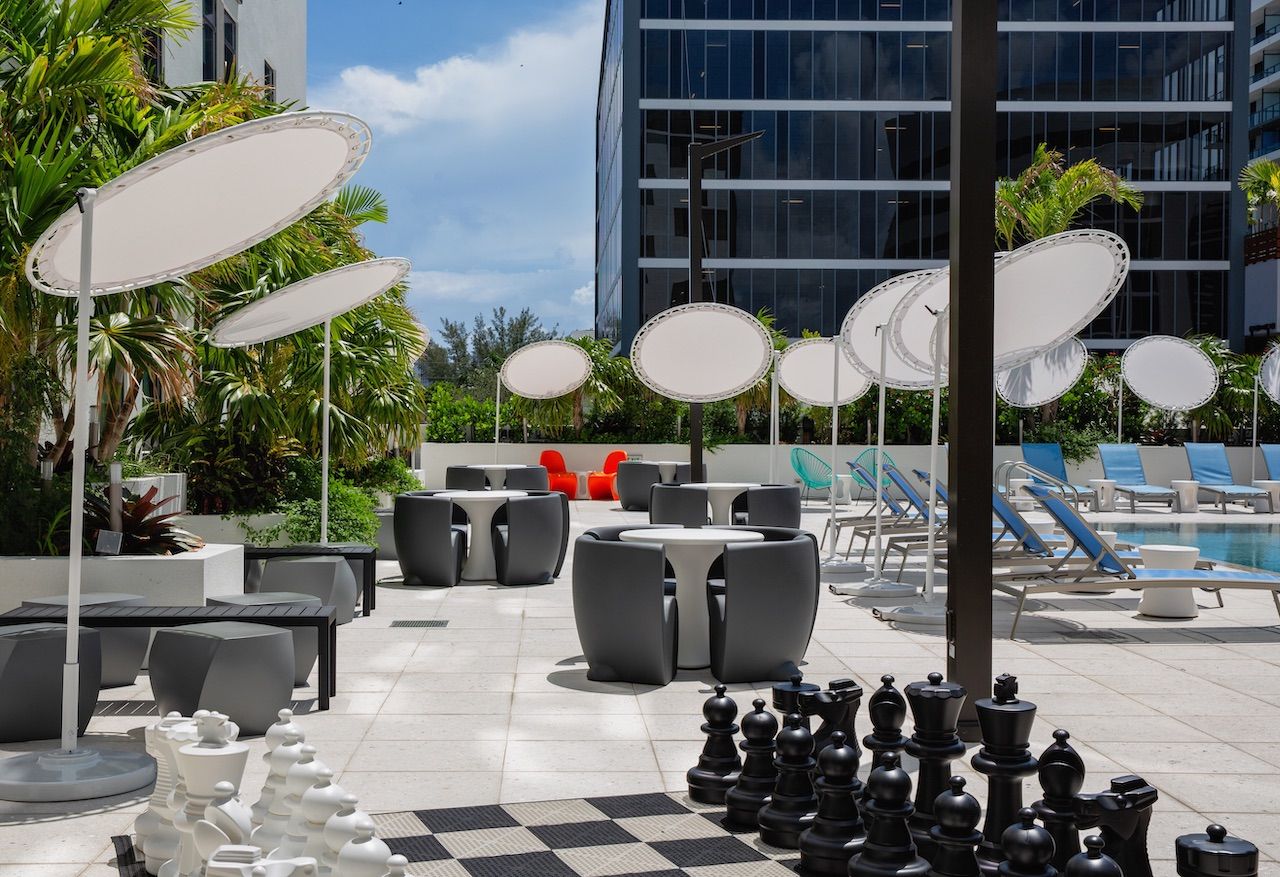 In sunny South Florida, you don’t want to be stuck inside during your downtime. That’s why the Aloft Aventura Miami, just north of Miami, has set its library right next to the pool. Though you won’t find a ton of beach reading, you will find oversized chess, Game of Thrones Risk, Cards Against Humanity, Scrabble, and a billiards table, so you can learn to hustle pool without looking like a pool hustler. 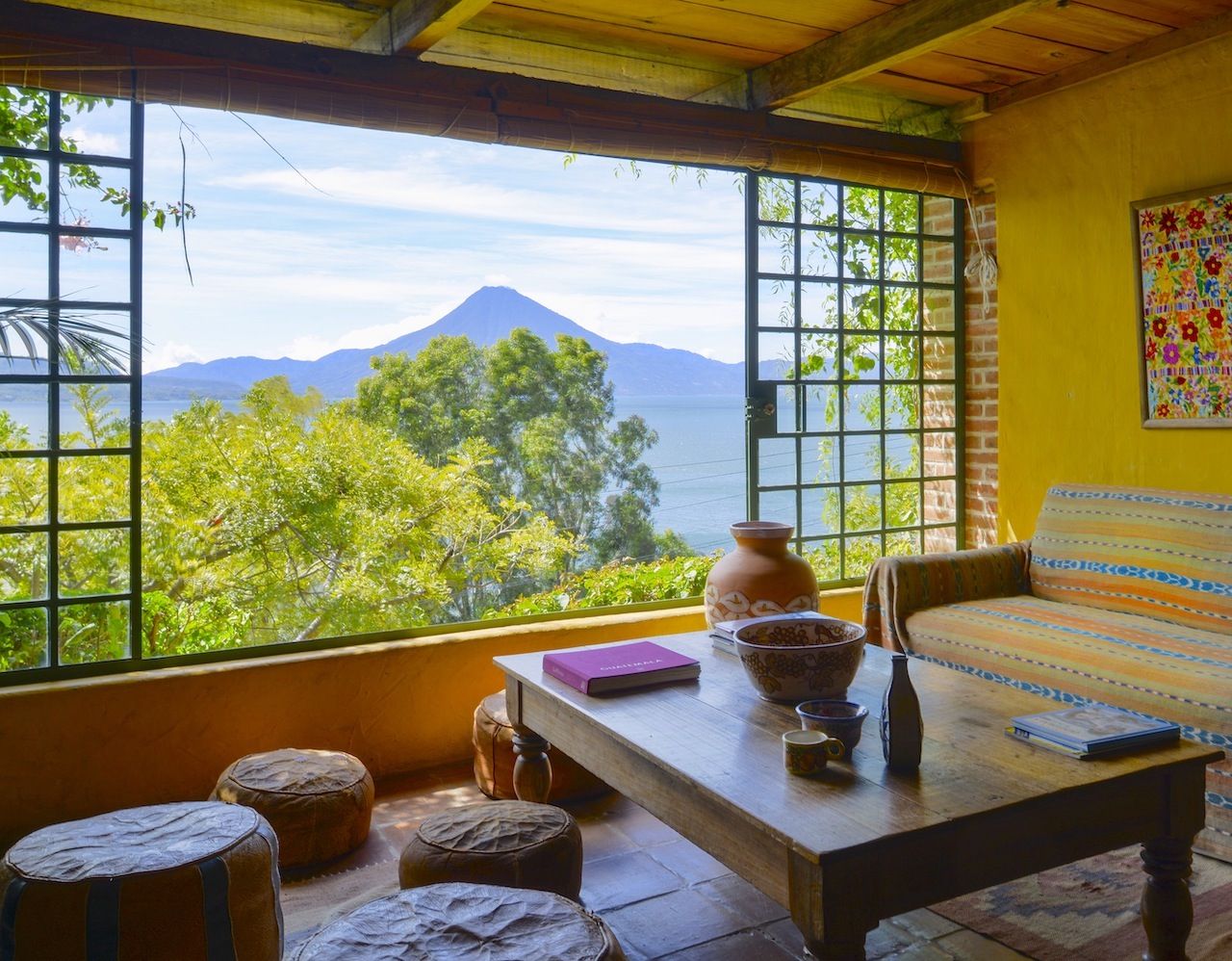 As 15-room boutique hotels go, you’d be hard-pressed to find a cooler library than the one at this stucco-walled gem on the shores of Lake Atitlán in Guatemala. Inside, you’re presented with a front-row seat to the gleaming blue lake, and everything from epic novels to trashy new magazines to help distract you from the view. The library’s also dotted with native pottery and a chess board near the window, creating more culture per square foot than almost any other hotel in the country. 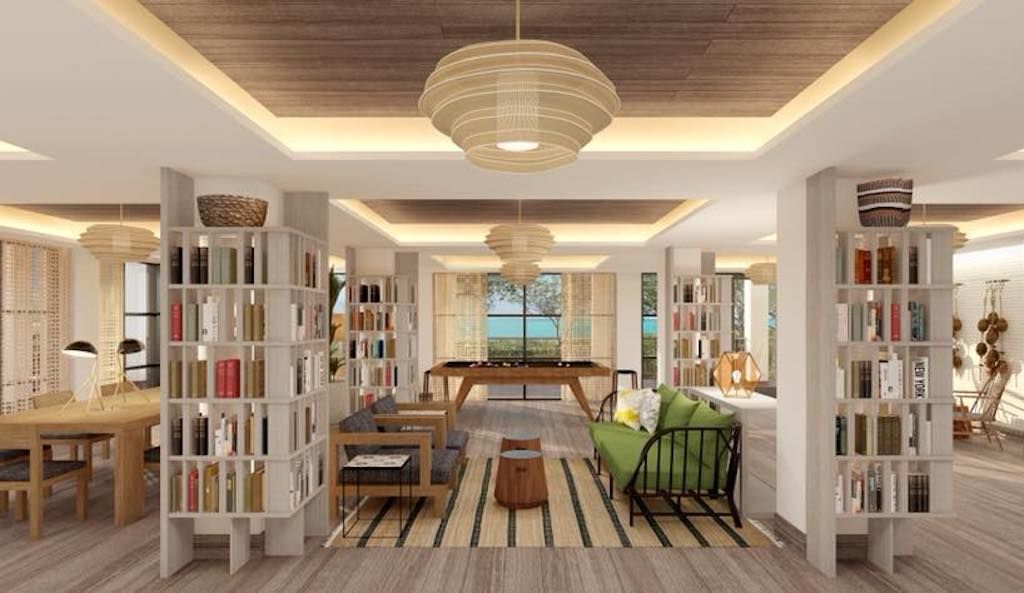 Another of the modern, sleek, post-Irma resorts to open in the Florida Keys is Baker’s Cay, a beach house resort that feels like a remote escape in the middle of the ocean. A big part of the tranquility is the paperback-filled library, where long tables and ocean views alternate with towering shelves and comfy couches. It’s a cool place to relax in air conditioning after a hot day on the water — and one of the best library views you’ll ever find.

BooksThe 7 Coolest Libraries Around the World
Tagged
Books Epic Stays
What did you think of this story?
Meh
Good
Awesome