The tornado that tore through Nashville and middle Tennessee Tuesday left death and destruction in its wake, damaging homes and businesses and killing 24 people. East Nashville sustained particularly heavy damage, with 140 buildings, concert venues, recording studios, and music businesses damaged. Much of the area’s music and art community was affected by the devastation, with several popular establishments left reeling.

The Basement East, a hugely popular venue that hosts both national acts and local artists, suffered a collapsed outer wall. The venue, known locally as the “Beast,” is now working to relocate or cancel upcoming shows, posting on Facebook that, “We appreciate all the love and support from the Nashville community.”

Symbolically, the venue’s “I Believe in Nashville” mural was left intact. 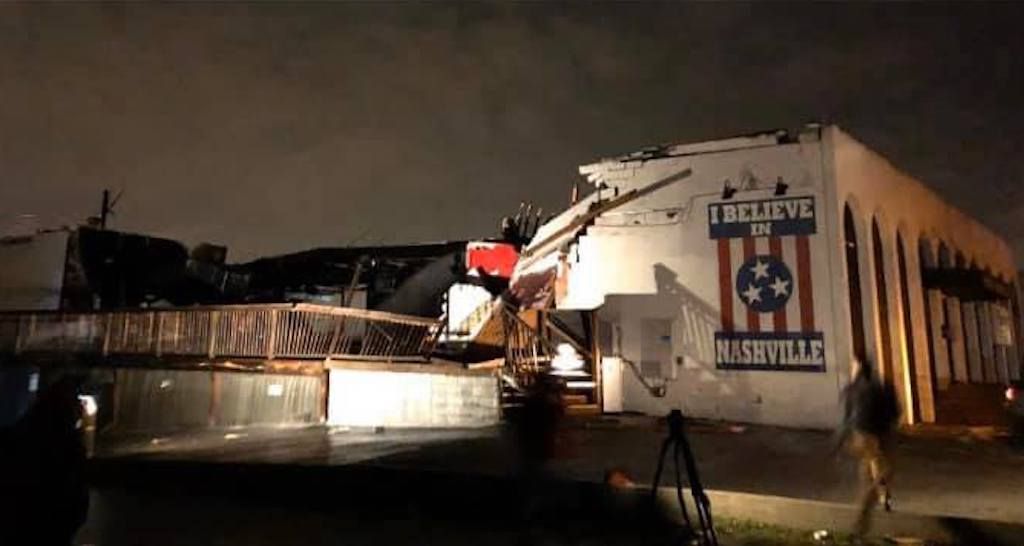 Several of Basement East’s neighbors in the popular Five Points district also bore the brunt of the tornado. Nashville-based singer-songwriter Mercy Bell told NPR Music that she was working at Rosemary, a musician-run bar in the area, when the tornado hit. “I stood in the middle of the street dumbfounded and heartbroken,” she said. “This was the neighborhood and community that’s given me my music and it was demolished.”

Fanny’s House of Music, a full-service music store, is also closed following damage sustained from the storm that left the building without power. The 5 Spot, a popular live music venue on Forrest Avenue, luckily sustained minimal damage, though it remains closed until power is restored.

The headquarters of Dualtone Records, just a block away from Basement East, was also destroyed. “Much of Five Points [is] in what now looks like a war zone,” said Dualtone president Paul Roper. “Amidst it all, we are grateful to so many who have reached out with their love and support. This music community is strong and that is felt nowhere more closely than in Nashville.”

Indeed, the community is banding together to collect donations for the tornado’s victims and to help repair beloved local venues. Singer-songwriter Margo Price is volunteering, delivering supplies to the Red Cross, while country artist Kacey Musgraves announced plans to sell her clothing and accessories to Stage to Closet, with the proceeds going toward tornado relief.

To make a contribution, you can donate to air organizations like Hands on Nashville, the Community Foundation of Middle Tennessee, and the Red Cross of Tennessee.

Music + NightlifeThe 9 best music venues in Boston to catch a live show
Tagged
News
What did you think of this story?
Meh
Good
Awesome