The Tidal Basin on Washington DC’s National Mall is an iconic landscape connecting some of the country’s most famous memorials — including those to Jefferson, MLK Jr., and FDR. Urbanization, rising tide levels, and the sinking of the area, however, have led to the basin’s gradual deterioration. The waters of the Potomac River flood the Tidal Basin twice daily, making the footpath impracticable, and threatening the famous cherry trees whose roots are constantly flooded.

Teresa Durkin, executive vice president at the Trust for the National Mall, said, “After 130-some years, we’ve got pathways that are too narrow [which pushes visitors to walk on the grass and] the trees get trampled. The trees get flooded with the brackish water from the flooding. So there’s a myriad of issues and problems here.”

To save the National Mall’s Tidal Basin, the National Trust for Historic Preservation, the Trust for The National Mall, and the National Park Service created the Ideas Lab where visitors can share their experience of visiting the site and express their ideas and concerns for its future. The lab also showcases the vision of five professional landscape architects for the site.

The five architects include DLANDstudio, GNN, Hood Design Studio, James Corner Field Operations, and Reed Hilderbrand. The studios’ detailed proposals to rescue the 19th-century site, including photo and video renderings, are all available on the Ideas Lab. 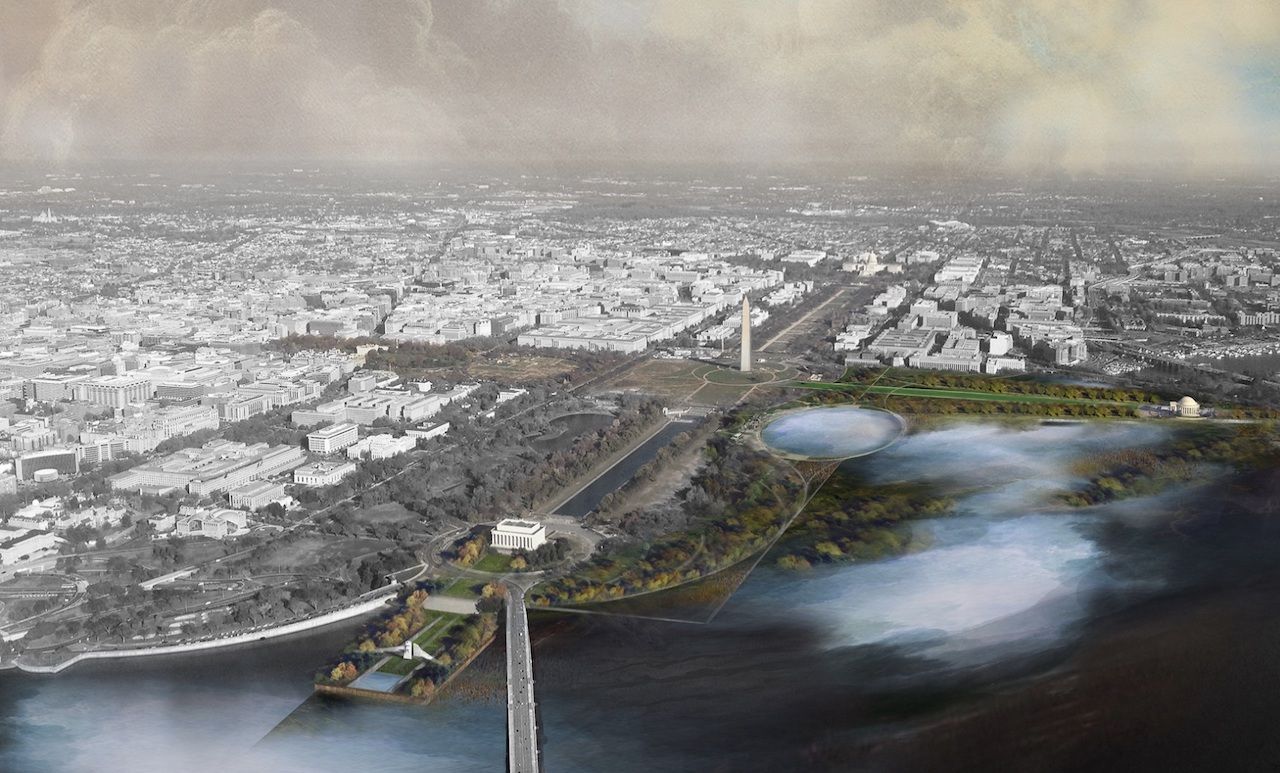 DLANDstudio’s plan involves creating a land bridge between the Jefferson Memorial and the White House, as well as a jetty off the Lincoln Memorial that will also be home to the Martin Luther King Jr. Memorial. There’ll also be green walls, wetlands, swimmable waters, and an organic berm to avoid floodings. The memorials to Roosevelt and King, as well as the cherry trees, will be moved. 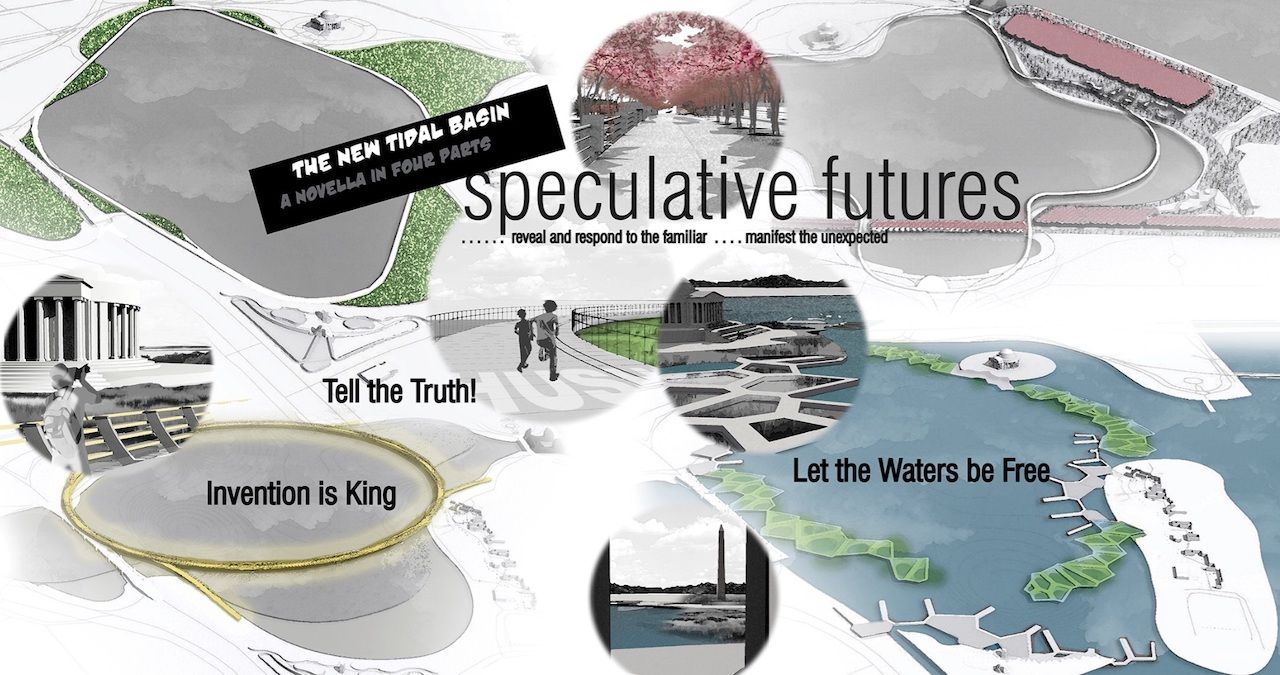 Hood Design Studio’s proposal calls for emphasizing the lost cultural history of the area and incorporating that history into the landscape. According to NPR, Walter Hood wrote in his proposal that his vision for the space includes “replacing the classical design of the romantic and baroque with other stories embedded in the American landscape — and integrates storytelling around Hush Harbors, antebellum places where African American slaves went to practice their religion at Potomac Plantations.” 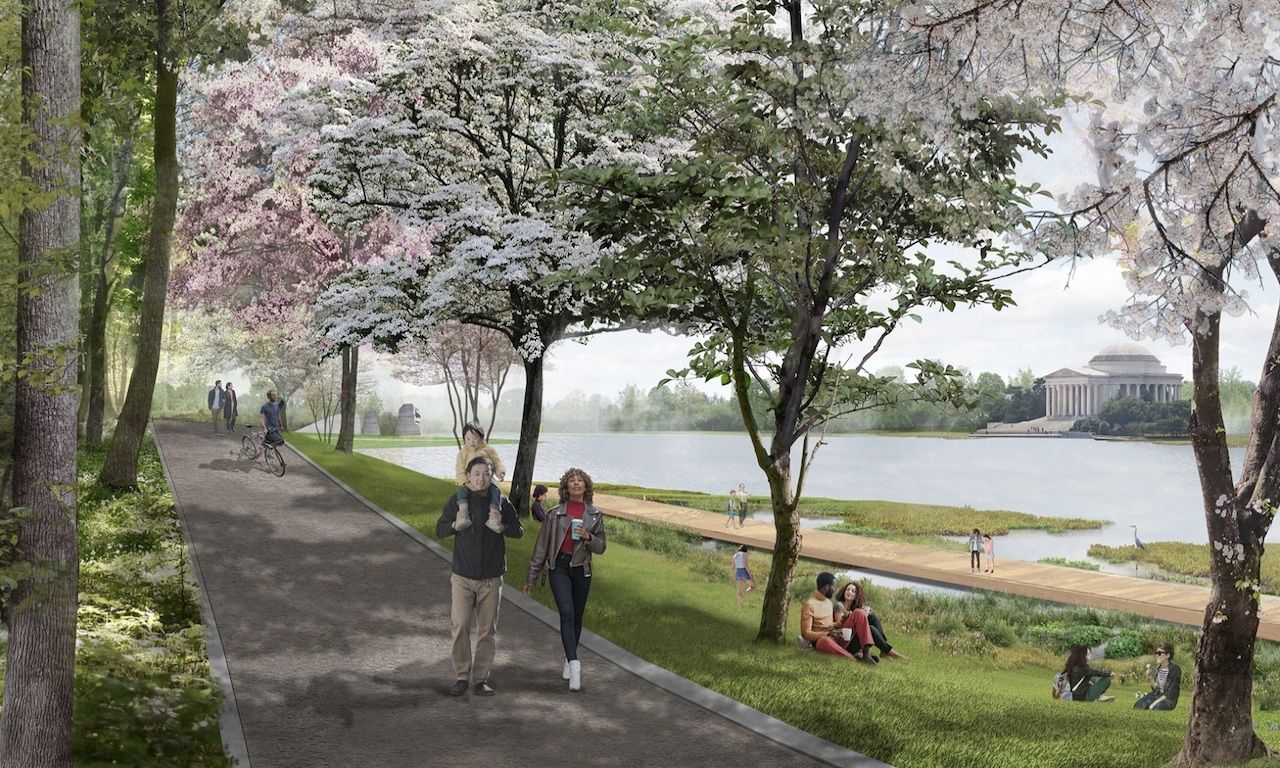 GGN’s plan presents incremental changes in three phases between now and 2090 that will buy the carers of the site some time to accommodate the sea-level rise. The proposal focuses on environmental changes including creating a flood-plain forest, wind gap meadows, and tidal marshes. Monuments would also be “adapted, protected, or relocated.” 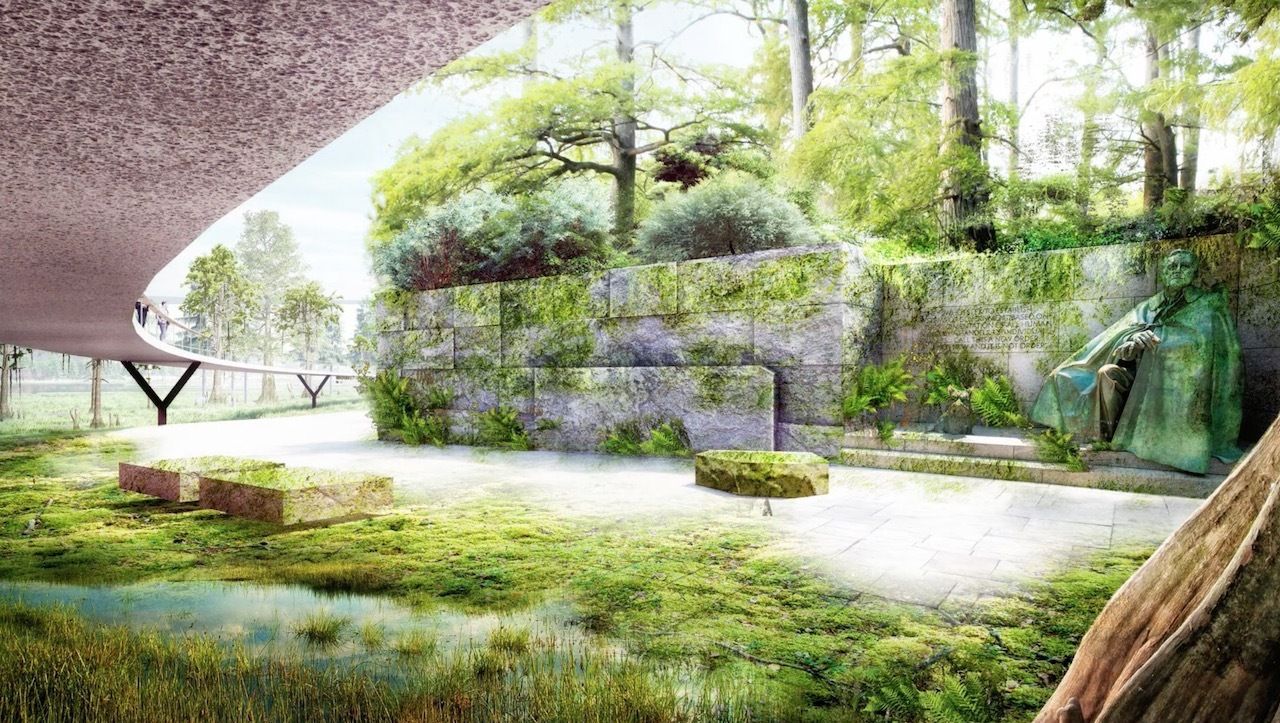 James Corner is looking at a proposal that would effectively let nature take its course and allow the inevitable flooding to take place. The plan calls for an elevated circular walk where visitors can view monuments that will eventually be destroyed. In his presentation, Corner wrote, “The monuments in this scenario will gracefully age and decay, melancholia prevails, sitting as entropic ruins, a natural time where daily flooding is absorbed as part of nature’s cycle.” 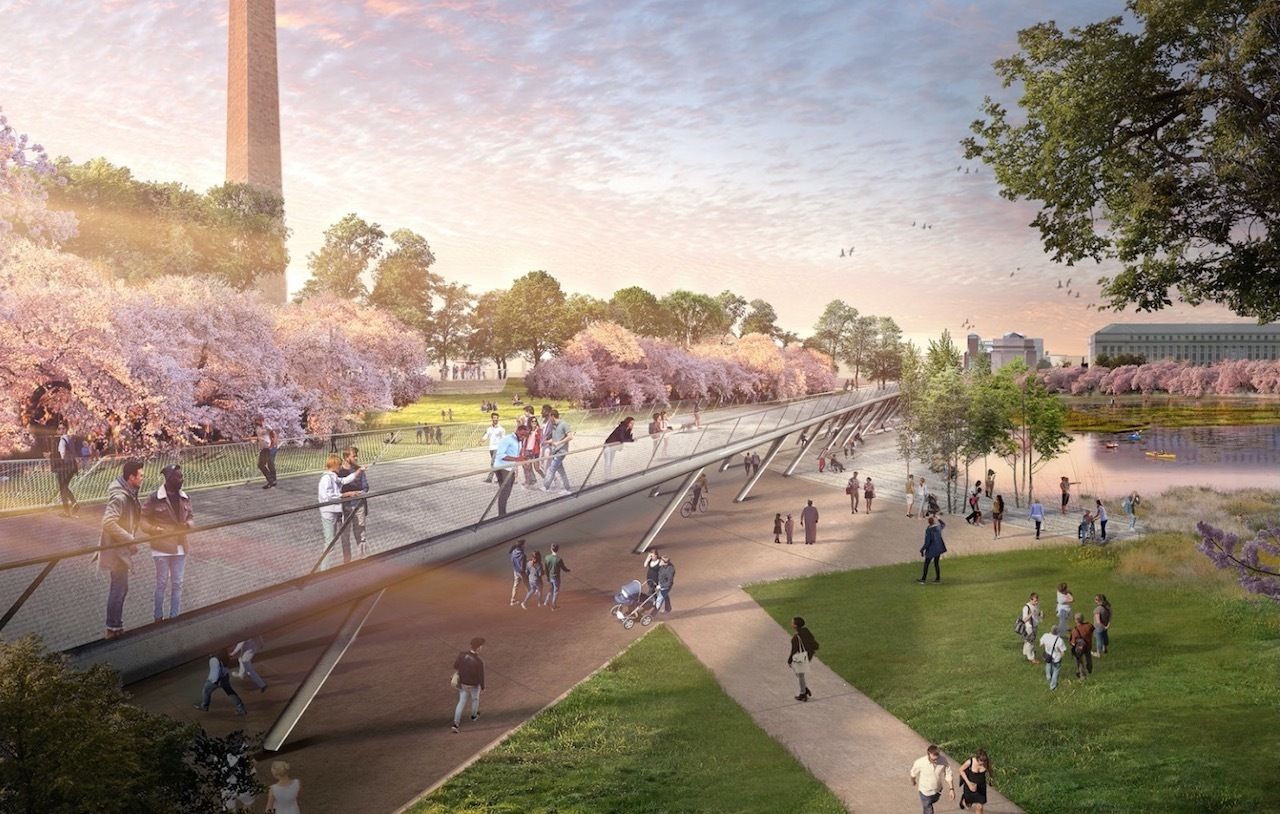 Reed Hildebrand’s approach is to build upon the diverse experiences and cultural moments the Tidal Basin represents. The plan is to make the space equally a commemorative landscape, recreational parkland, an ecologically vibrant living system. The cherry trees would be moved upland, a pedestrian bridge would be built, gathering areas of open lawns would be created for visitors to take in the site, and several circuit walks would guide visitors throughout the area.

The initiative is not considered a design competition but rather a creative collaboration, out of which a sustainable solution will hopefully emerge.

Airbnb Cancels All Reservations in Washington, DC, Ahead of Inauguration

The 7 Best Black-Owned Restaurants in the DMV