Under the watchful eye of the man who coached the NFL’s only perfect team, a group with an even more impressive streak is holding court.

In a photo-filled dining room at Shula’s Hotel and Golf Club in Miami, the Never Miss a Super Bowl Club is hosting its annual luncheon a couple of days before Super Bowl LIV. And its three remaining members are reveling in the brief fame they get every year before the big game.

“Eh, they bring us out for two weeks, then put us back to bed,” groans Don Crisman, 80, who’s traveled here from Maine. He’s joined by Tom Henschel, 78, from Tampa and Greg Eaton, 84, from Lansing, Michigan. Each of them has attended every Super Bowl since the first NFL/AFL World Championship Game in 1967. And they’ve become as much a Super Bowl fixture as lavish parties and Buffalo wings.

Once upon a time, getting to the Super Bowl was easy.

“I was working in Colorado, and I had some friends who worked for a bank, and the bank got tickets from the Broncos,” Crisman says of his first Super Bowl. His bald head is covered by a new, unbent Super Bowl LIV hat. “And nobody wanted them, except me and [deceased club member] Stanley Whitaker. We were the only ones who stuck it out.”

His book of ticket stubs shows his ticket from the first game. It cost $12.

Greg Eaton went to his first Super Bowl through his relationship with Packers running back Herb Adderley, who he knew from Adderley’s time at Michigan State.

“I used to go to the games up there [in Green Bay], and Herb said ‘You got to come! It’s a World Championship,” says Eaton. “It wasn’t the Super Bowl back then, but he said ‘You’ve got to come to this!’ So that’s how I got started.”

Over the years the men have missed weddings, funerals, and other important family events to make it to the Super Bowl. Henschel even told a story of suffering a severe asthma attack the morning before Super Bowl VI in New Orleans. After stumbling out of his hotel’s front door unable to breathe, he passed out and police took him to a nearby hospital.

“I woke up with an IV in me, in the ER, with oxygen,” he recalls. “A nun came in and told me I had to be under observation for 24 hours and I said, ‘Sister, I’ve got to get to the game!’ She said she was sending a lady up to the room to get my information. Once she walked out of the room, I ripped that IV out and got the hell out of the hospital. Got back in time, met up with my friend, and we went to Super Bowl VI together.”

Crisman says his streak almost ended before it began, as icy conditions kept him stranded in South Carolina for three days before he hopped on a train to Miami for the 1968 game. He arrived in town just a couple of hours before kickoff.

“I never came close to missing because I’d always see the whole week,” says Eaton, “but this year I was worried because the governor of the state of Michigan… that’s her father right over there…”

He points to a man in a Hawaiian shirt hunched over a Shula Burger. He does not interrupt his lunch to acknowledge the shout out.

“Anyway she’s my niece, so she had the State of the State Wednesday. I flew back for that and I didn’t sleep that night, cause if I missed that flight, I couldn’t get another flight cause they’re all booked!”

He says this as casually as if he were flying in for his niece’s graduation from preschool.

The birth of a Super Bowl tradition 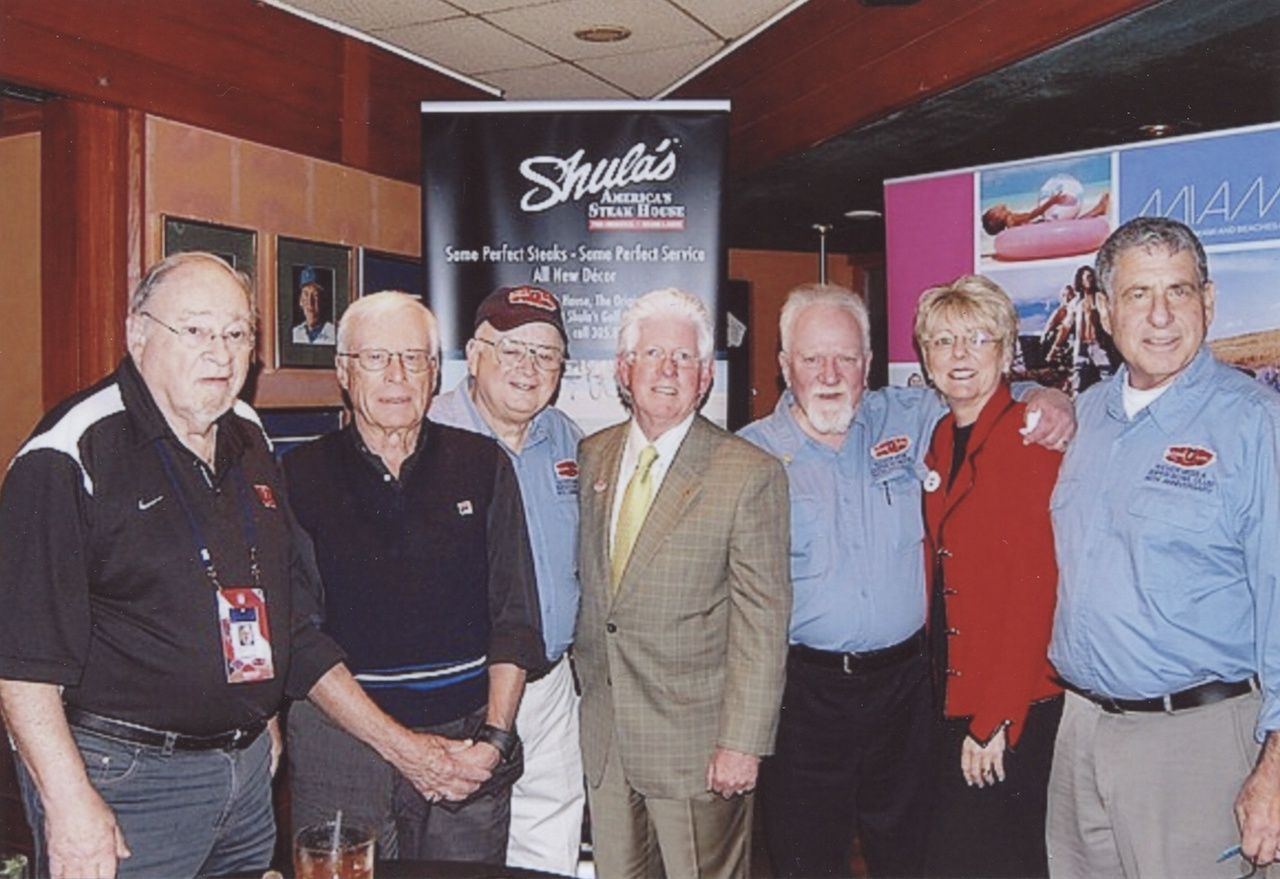 Though the club now watches the game together, only over the past couple of decades has it been an official thing.

For the first 17 years, it was just a bunch of guys going to the Super Bowl separately.

“Stanley [Whitaker] was afraid of flying, so he had this big bumper sticker on his car that said, ‘Never Miss a Super Bowl Club,’” says Crisman of his late club comrade. “We’re in the line for the Johnny Carson show before Super Bowl XVII, and Tom comes running up saying, ‘Who owns that car with the never miss sticker?’ And that’s how we met Tom.”

Sixteen years later, the original three members read an article in the game program at Super Bowl XXXIII listing all the people who’d attended every game. That was how they found Larry Jacobson of San Francisco, then later Robert Cook of Green Bay. That was around when the NFL recognized the club and began setting aside two tickets for each club member to purchase.

A few years later, Cook was preparing to board a plane to watch his beloved Packers play in Super Bowl XLV when he suddenly had to be admitted to a hospital. He watched the Packers beat the Pittsburgh Steelers from his hospital room, then died four days later.

For Super Bowl 50, the NFL gave the remaining members all-expense-paid trips to the game, as well as game tickets. Four years ago, Jacobsen found Eaton and brought him into the fold. He then passed away after Super Bowl LI. 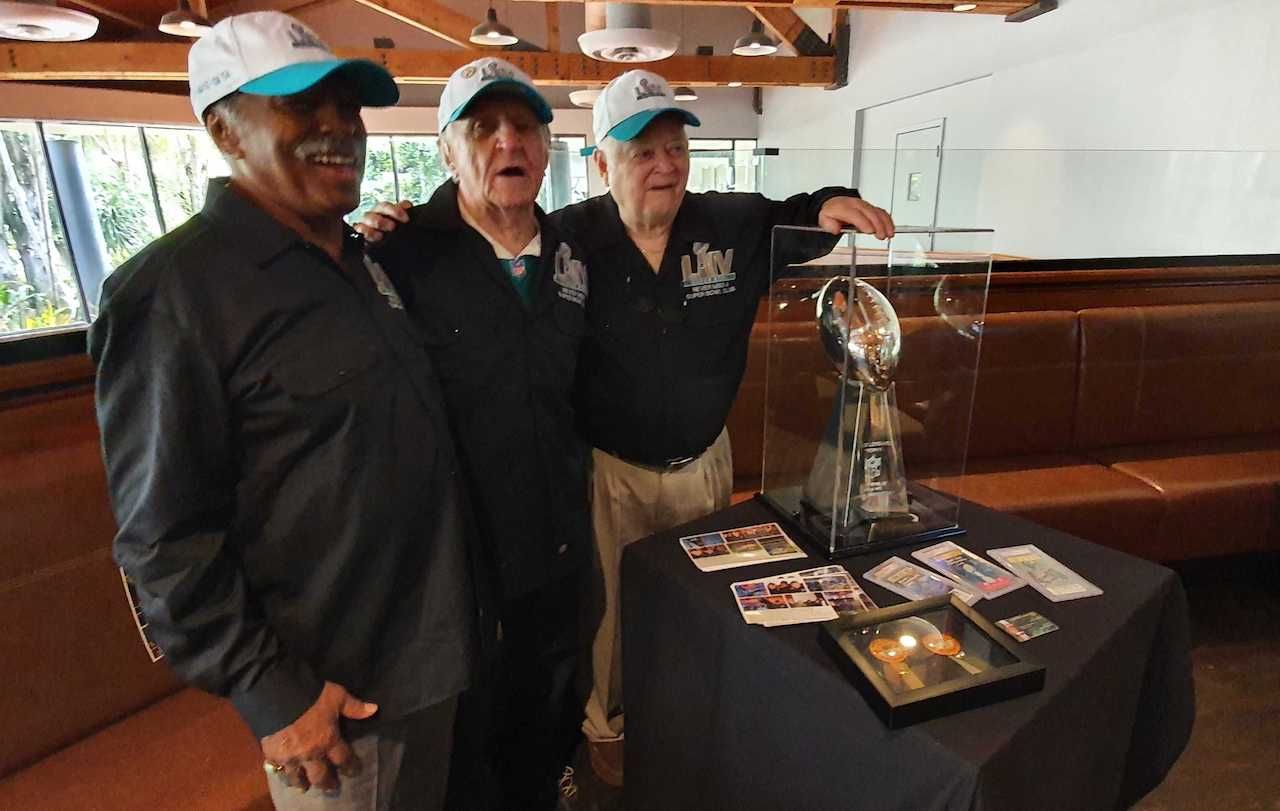 Though the Never Miss a Super Bowl Club gets most of the Super Bowl Week media attention, they’re not the only people to have the distinction. Detroit Free Press writer Jerry Green has been to each game, as has Norma Hunt, wife of late Kansas City Chiefs owner and AFL pioneer Lamar Hunt.

“Once they put me in a wheelchair, maybe I’ll think about not going,” adds Crisman.

“If not, I’ll sit in my old chair and reminisce,” says Eaton.
“And maybe” adds Crisman, “we can sit in our wheelchairs together, and reminisce on the guys who are no longer with us.”

EventsAt North Dakota State University, Tailgating Is an Education in the Culture of the North
Tagged
Events
What did you think of this story?
Meh
Good
Awesome