Manhattan’s Little Italy has been one of the most popular New York City tourist attractions for more than 50 years, whether visitors are stopping by for cannoli or to experience the legendary San Gennaro festival. The majority of the two dozen New York City Little Italy Italian restaurants, bakeries, and specialty shops in the neighborhood are located along the three blocks of Mulberry Street between Canal and Broome. Whether you start your journey along Mulberry from Canal or Broome, you’ll be greeted by a large “Welcome to Little Italy” sign which extends over each gateway (sometimes lit up by green, white, and red lights of course) to this busy three-block pedestrian-dominated thoroughfare, where cars are generally looked upon as unwanted intruders.

Every day from noon to midnight, gregarious hosts stand at their posts outside restaurant doors, often with menus in hand, looking to lure in gawkers. Visitors come to the neighborhood to see where The Irishman was filmed and then sit down for pizza, pastries, or pasta. Souvenir shops are as much a part of the scenery as the outdoor dining pods that have stayed in place since COVID.

Despite the heavy tourist presence here, locals still frequent their favorite New York City Little Italy Italian restaurants, whether it be late-19th-century landmarks like Caffe Roma and Puglia or newcomers like Pep’s on Grand. And so do people who left the neighborhood decades ago for New Jersey, Long Island, or the outer boroughs.

And while many old-school Italian restaurants in the outer boroughs are inconveniently located and notoriously challenging to get a table at, it’s impossible not to get a table in Little Italy. On the surface, the restaurants may seem indistinguishable from one another. Most are named after a region of Italy or begin with ‘La’ or ‘Da. You’re unlikely to have a bad meal at any restaurant within the three densely-packed blocks, but here are seven must-try New York City Little Italy Italian restaurants. 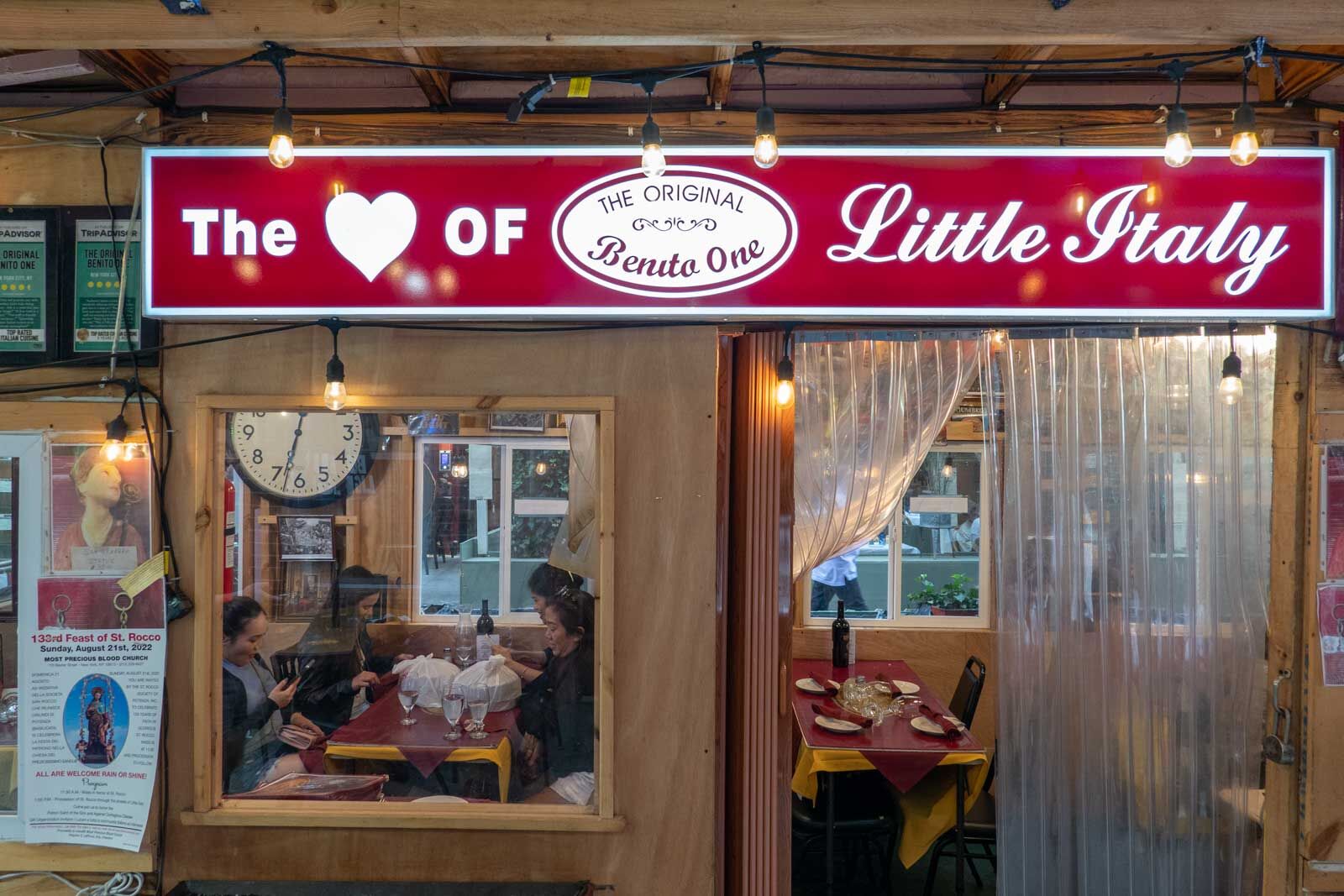 Benito One is the definition of a New York City old-school Italian restaurant. You’ll often find owner James Bari seated outside this small eight-table restaurant which dates back to 1968. In Manhattan’s Little Italy, multiple dining rooms and seating capacities over 100 are the norm. But Benito One feels intimate and exclusive without any pretense.

Inside, the walls and tablecloth are as red as the marinara sauce that you can’t leave Benito One without trying. The menu has grown quite a bit since 1968, but the carciofo ripieno (stuffed artichoke) and Veal Benito date back to the beginning. The latter is a plate of thin veal medallions and chopped asparagus in a medium-thick marsala sauce topped with shredded basil.

Bari has added to the menu quite a bit since purchasing Benito One in 2010. The chicken valdastano is one of his personal recommendations. The sauce is similar to the Veal Benito, but it’s a chicken breast stuffed with prosciutto, mozzarella, and mushrooms. 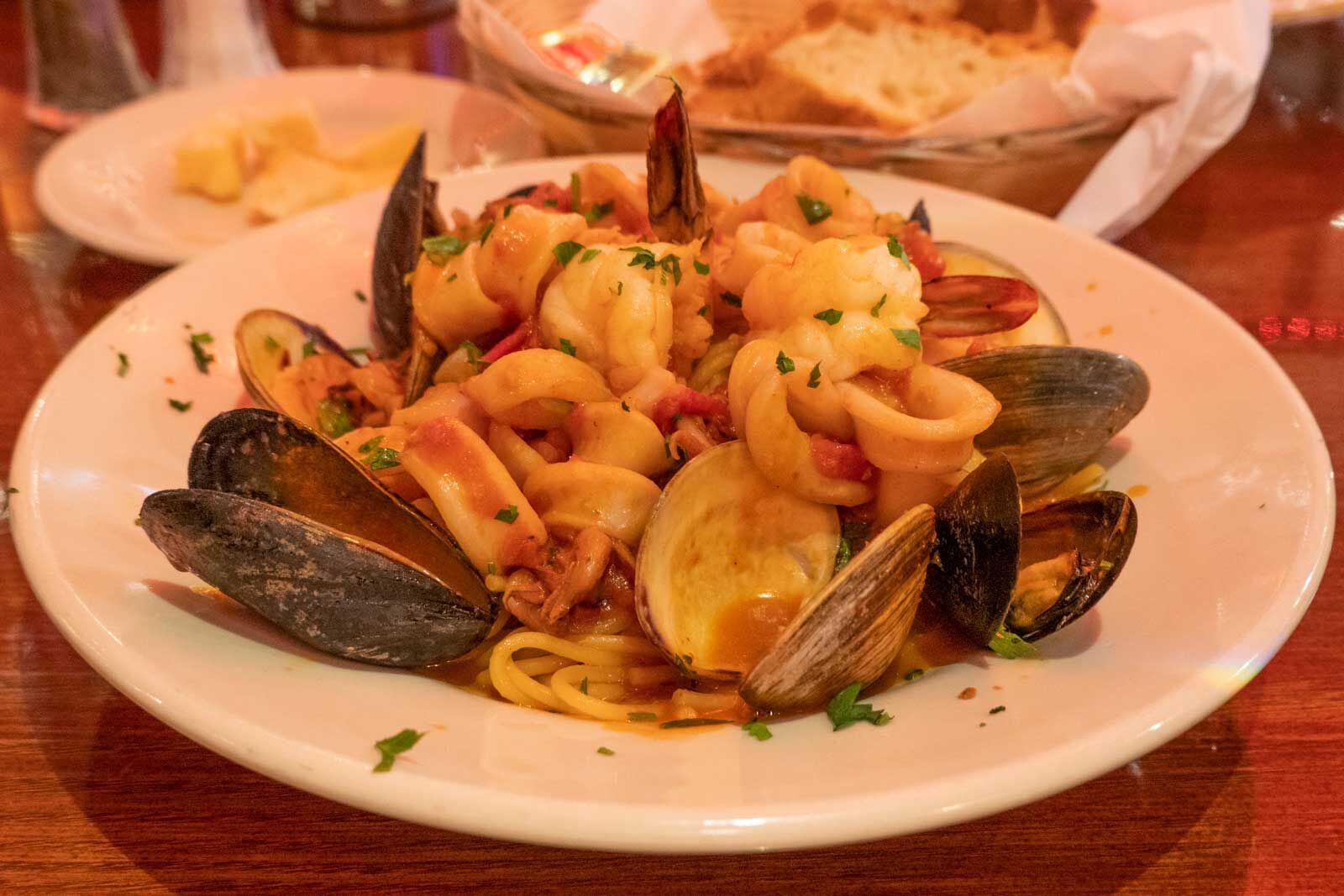 Casa Bella is one of the more upscale dining options in Little Italy. Yet it feels understated because the walls are not covered with pictures of every New York Yankee, movie star, and former NYC mayor who ever dined here (an aesthetic you’ll encounter at many Italian restaurants around New York).

Ask Brooklyn native and owner Adele “Bitsie” Gallo what to order, and she’ll likely tell you that people come to Casa Bella for the pasta dishes. And they’ve been doing so since the 1980s. You can’t go wrong with the pasta verdi fruiti di mare, lobster ravioli, or spaghetti pescatore. The latter comes stacked high with seafood to the point where you can barely see the medium-sized portion of pasta.

While the imported green Italian marble on the building’s exterior and well-dressed servers make it clear that this is no sports bar, there are price-fixed options that start at just $25. On Friday and Saturday, the live music begins at seven and ends just after midnight. 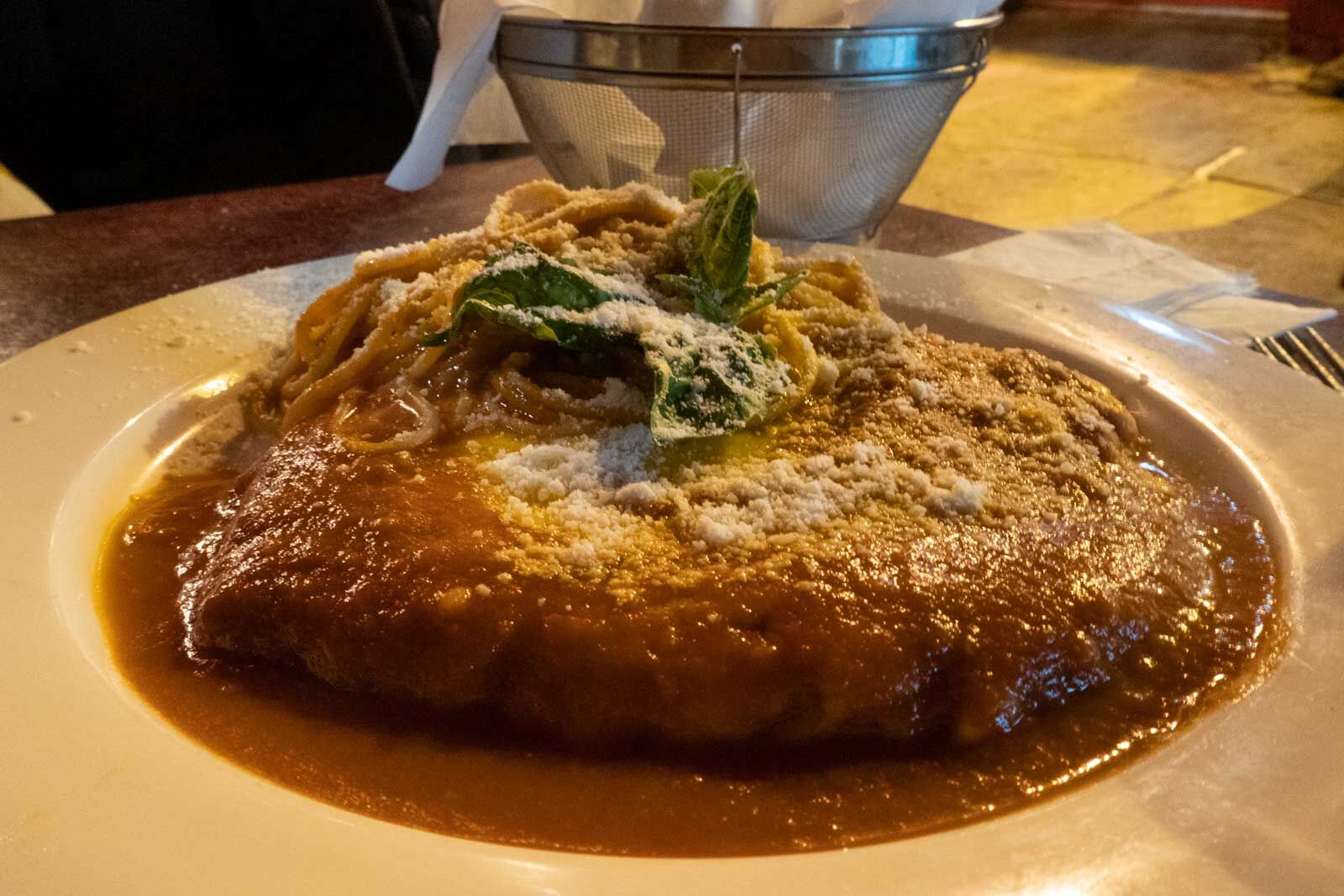 Da Nico is the one Little Italy restaurant where you should insist on sitting inside. Based on the red doors and sign above the main entrance, one can be forgiven for thinking that this is just another of the two-dozen Italian restaurants along Mulberry Street. But the further in you go, the more awe-inspiring it is. 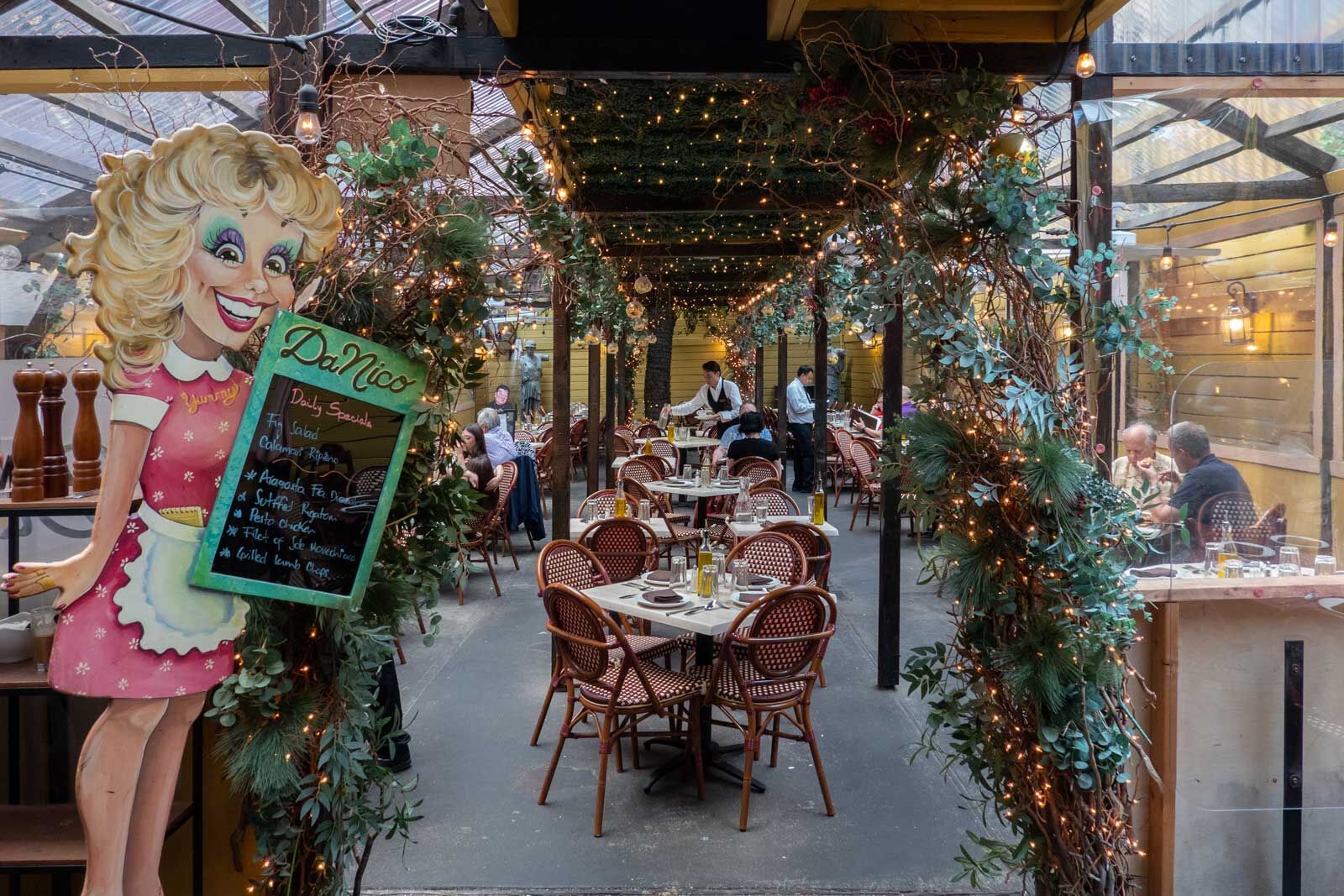 After entering Da Nico, you’ll see the bar and brick oven from which 14 different pizzas are prepared. Some of those bricks came from owner Nicholas Criscitelli’s great grandmother’s former store, which was located just up the street. From there, the narrow hallway leads to the rear dining room, where there’s a conspicuous nude female sculpture encased in glass built into the brick wall. But the best tables in the house are in the covered, skylit garden, which you enter from the rear dining room.

The menu is sizable, and the most expensive item (linguine di pesce) is $30. The gamberi fra diavolo is popular as are the margherita and quattro formaggi pies. And the specials change often. Cacio e pepe with house-made fettuccine will be on the specials menu from time to time, as will lobster fra diavolo. While Da Nico is classy, Criscitelli does not want to be seen as too stuffy. 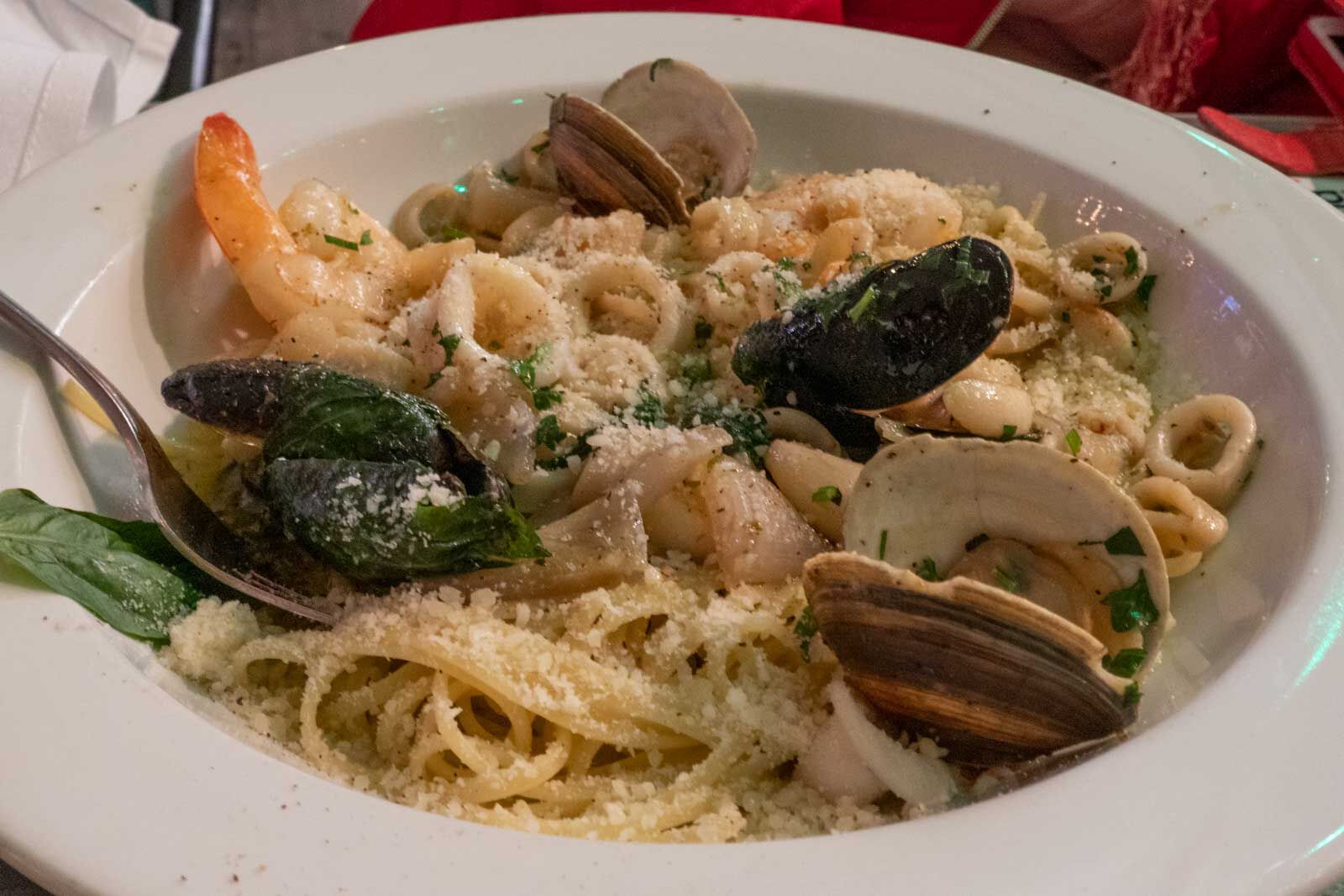 Each room has a different vibe at Il Cortile. This is the kind of place where tourists mix with locals, and you can easily tell the former from the latter. Film buffs might be aware that Il Cortile is the spot where the Sopranos cast held going away parties when a member’s character got whacked. But the connection runs even deeper than that. Former cast member Steve Schirripia used to live on the building’s fourth floor. The Bensonhurst native who played Bobby Bacala has his own table here, as does the late James Gandolfini. You can identify both by the framed 8×10 photos of the actors above in the courtyard room.

But even if Danny Devito didn’t hold his wedding party here or a single Sopranos cast member never stepped foot inside, Il Cortile (Italian for ‘the courtyard’), would still be one of the best dining experiences you can have in Manhattan’s Little Italy. Regulars know the drill and tend to ask for servers by name. Puglia native and 29-year Il Cortile veteran Angelo is a common request.

Patrons who know the drill often forego the menu and let their server make the decisions. Linguine cicale with red sauce and pepite di gnocchi are two of Angelo’s favorites. 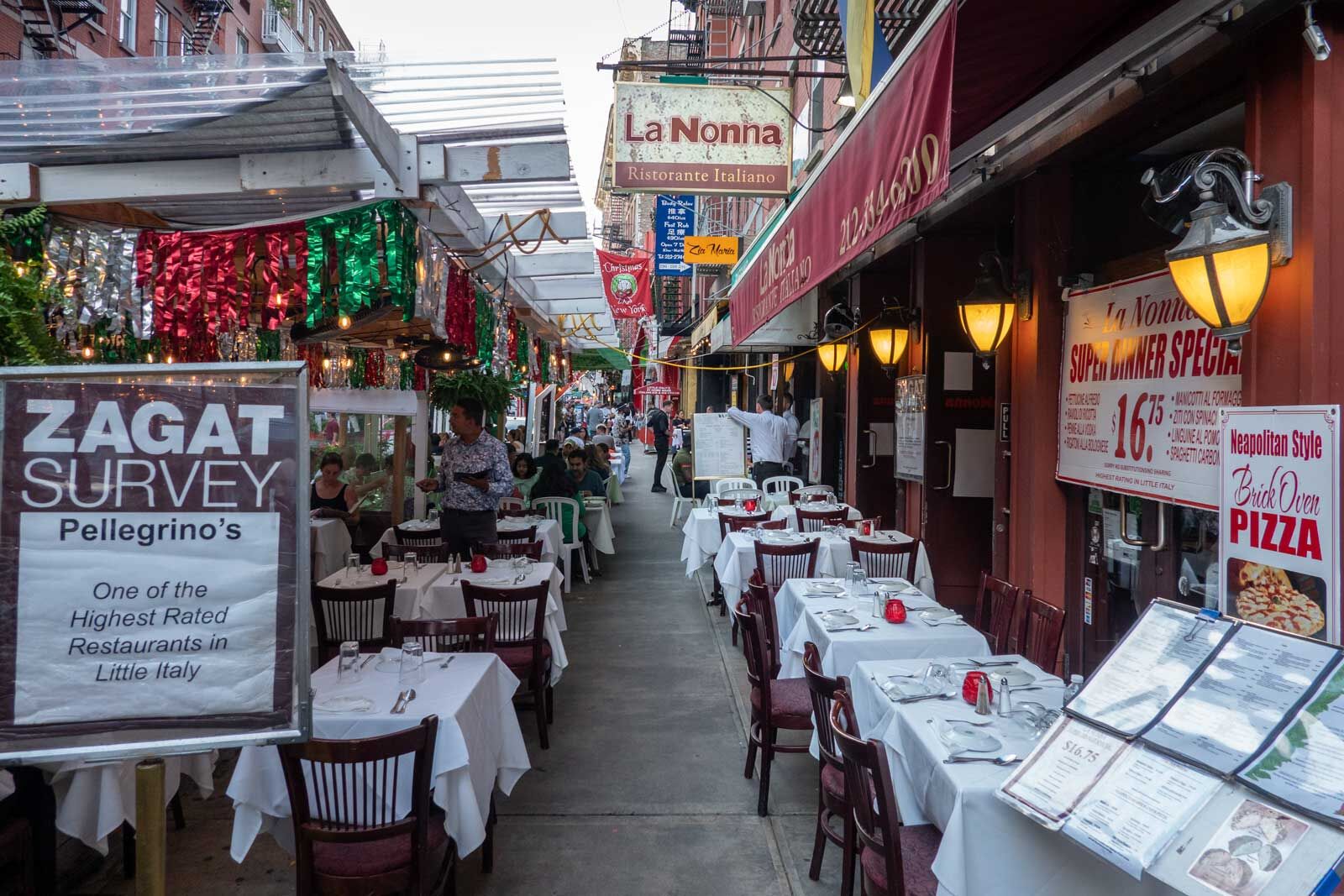 Italian for ‘grandmother,’ La Nonna aims to remind patrons of grandma’s cooking. This upscale white tablecloth Southern Italian restaurant has been on the block for thirty years. Prior to La Nonna, owner Perry Criscitelli ran Pellegrino’s, which you can still see remnants of both on the menu and throughout the restaurant.

There are dozens of veal, chicken, and seafood dishes, some of which you’re not likely to see at most Italian restaurants. For instance, the pollo al pistacchio is a chicken breast coated with crushed pistachio in a pistachio cream sauce.

On the higher end, La Nonna has a handful of steak entrees with cuts ranging from black angus sirloin to filet mignon. The carre d’agnello is a rack of oven-roasted lamb in a Cabernet sauce. All pasta is made in-house. 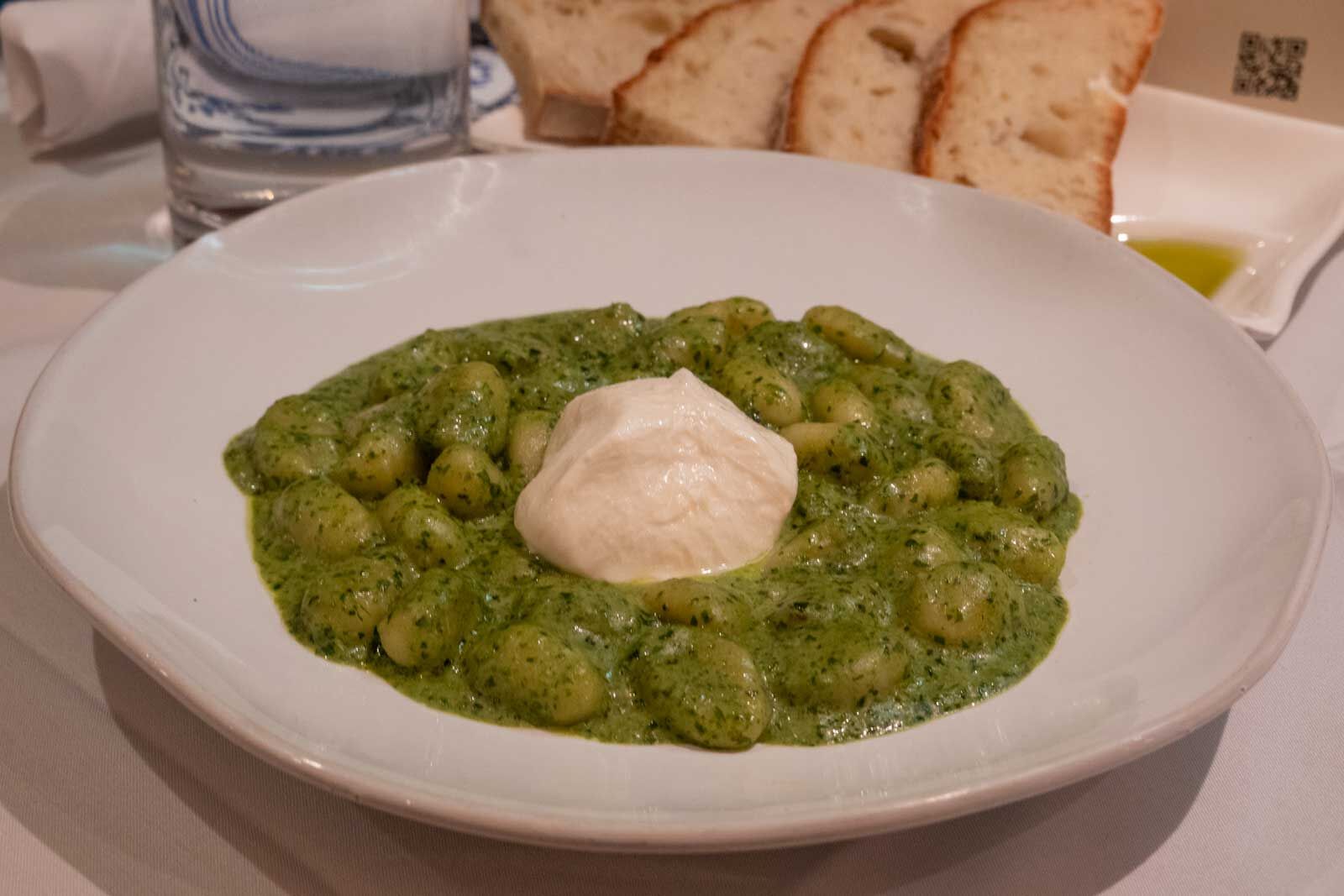 Named after co-founder and Puglia native Lunella Russo, this is one of the few restaurants in Little Italy that opened after 2000. At Lunella, every dish seems to have a story. And while most menus in the area can feel overwhelming as if to say, “we have everything here,” the two-sided menu at Lunella plays all the hits.

Lasagna al forno and artichoke ravioli are two popular pasta dishes. Fettuccine rossana was named in honor of current second-generation owner Rossana Russo because of her love of shrimp and asparagus. Penne alla norma is a nod to her father’s Sicilian roots, while trofie al pesto alla Genovese is a culinary ode to Genoa, where he migrated to before leaving for North America.

Speaking of pesto, if the gnocchi pesto is on the specials menu, you must try. It comes topped with burrata, the middle of which melts into the creamy pasta.

In 2021, Rossana became the first female president of the Little Italy Merchants Association. And as of this writing, Lunella is one of three woman-owned restaurants in Little Italy. 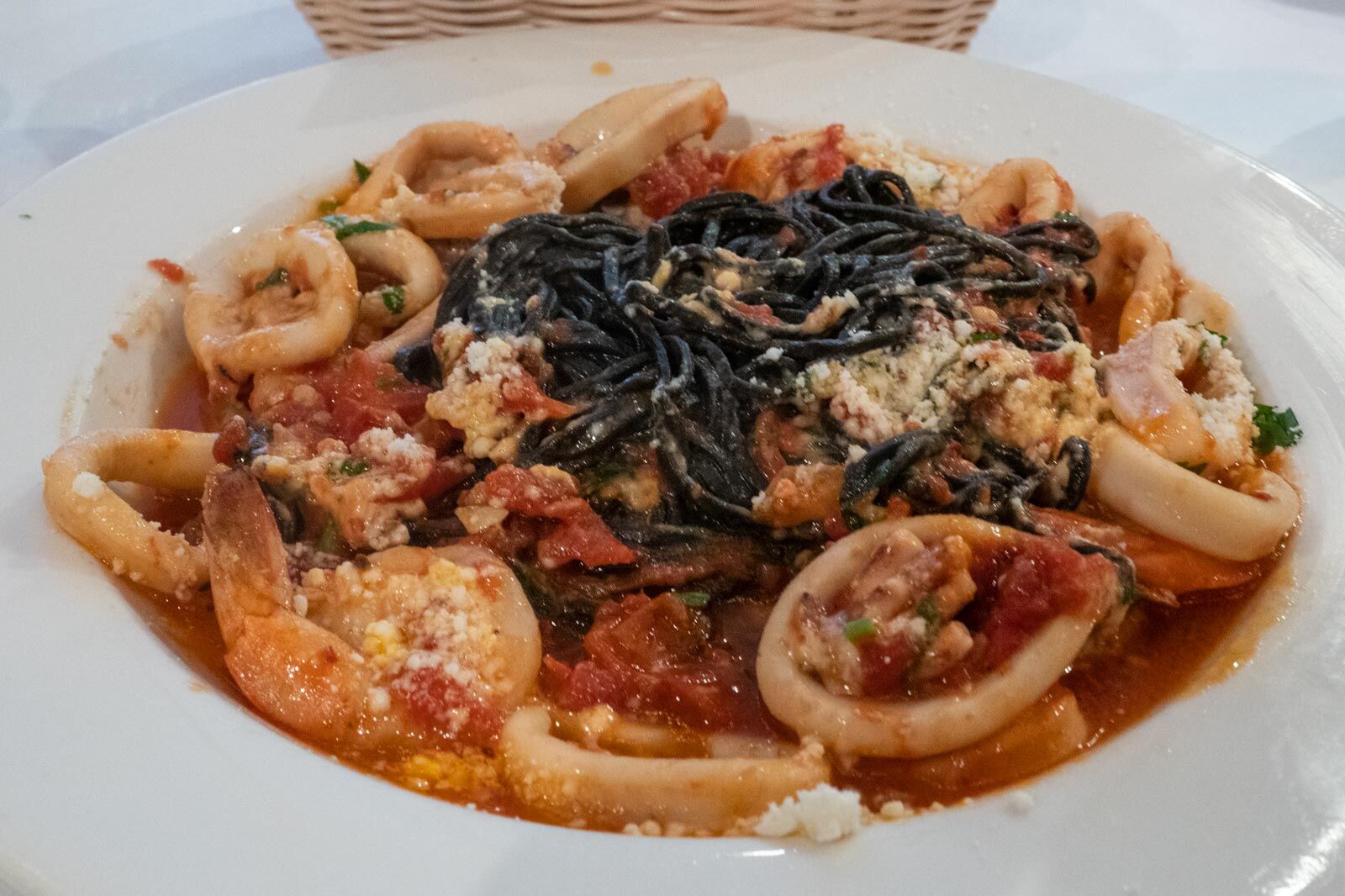 If you’re not from the area and only know one Little Italy restaurant, it’s probably Umberto’s. The current 100-capacity location is just a stone’s throw from the original one at the intersection of Hester and Mulberry.

People come here for the seafood. There’s a wooden helm on each side of the dining room. And the main wall is painted ocean blue. Baked clams, fried calamari, and linguine with white clam sauce are the top sellers. The latter has four simple ingredients: parsley, garlic, clams, and olive oil. Second-generation owner Robert Ianello Jr. is persistent about the quality of Long Island clams. For the linguine with white clam sauce, it’s unchopped little necks.

Equally popular are the fried calamari and baked clams. According to Ianello, Umberto’s sells thousands of the latter during the Feast of San Gennaro, which is held in the neighborhood every September. With the fried calamari, you’ll have the option of mild, medium, or hot sauce. These sauces cook for six hours and are mostly distinguishable from one another by the amount of Italian long hots and red pepper flakes. Regardless of which you choose, the sauce will stick effortlessly to the rings and tentacles, giving you plenty of flavor. Please resist the temptation to ask for marinara.

For dessert, try the tiramisu or cannoli. Both are made in-house.

Food + DrinkThese Are the ‘Unacceptable’ Things To Do To Italian Food, According To New Poll of Italians
Tagged
Food + Drink Restaurants + Bars New York, NY, United States
What did you think of this story?
Meh
Good
Awesome