If you love Edvard Munch, this new hotel needs to be on your travel radar.

Called the Ramme Fjordhotell (Rammefjord Hotel) and located roughly 40 minutes outside Oslo, Norway, the hotel and compound is a passion project for the owner, who cared so much about opening the hotel that he sold Munch’s most famous painting – “The Scream” – for a cool $120 million to finance the project. Despite that, the multimillion-dollar haven in the countryside where the artist once lived is still almost totally off the tourist radar. 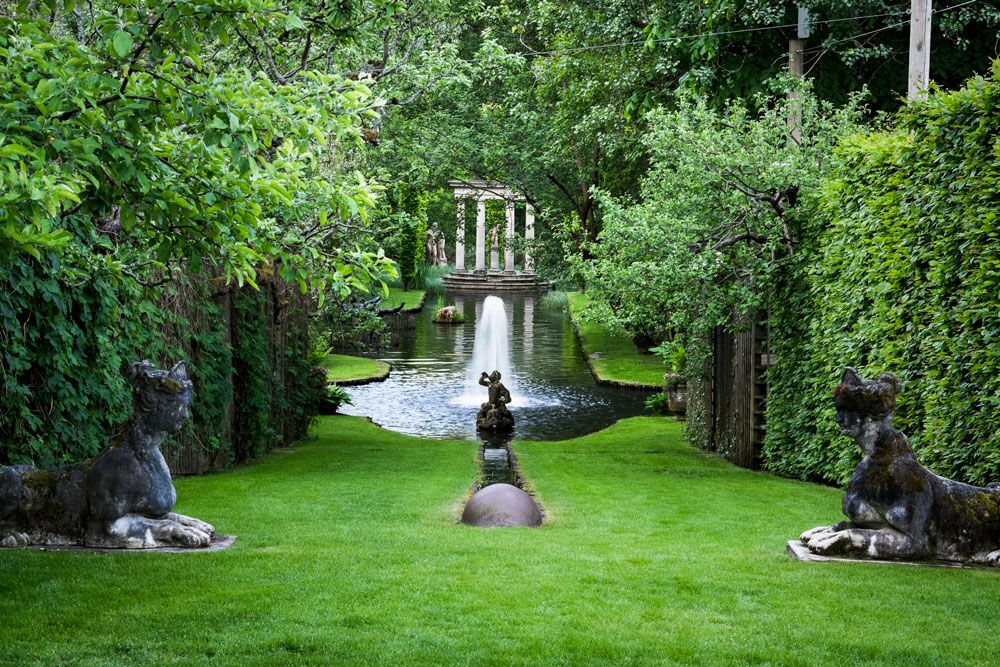 Hidden away and surrounded by forest, the hotel is on a remote country farm called Ramme Gaard. It’s the same location that gave the troubled artist a respite from his mental stressors and oft-cited “psychological demons.” (Munch struggled with depression and alcoholism through his early years). The hotel aims to bring some of the allure and history of being where the artist lived to guests, offering the chance to recline at night in a bed that Napoleon himself once laid in or getting close enough to original art to see light reflecting of the brushstrokes.

Travelers to the Oslo hotel always start their journey in Oslo proper, and if you love art, don’t dismiss the city as a mere stop-off point on the way to the northern lights or western fjords. Norway’s capital has much more to offer than it gets credit for – and now, it can add to its nearby charms the Rammefjord Hotel, one of the region’s newest must-stay destinations.

How to get to the Munch Oslo hotel 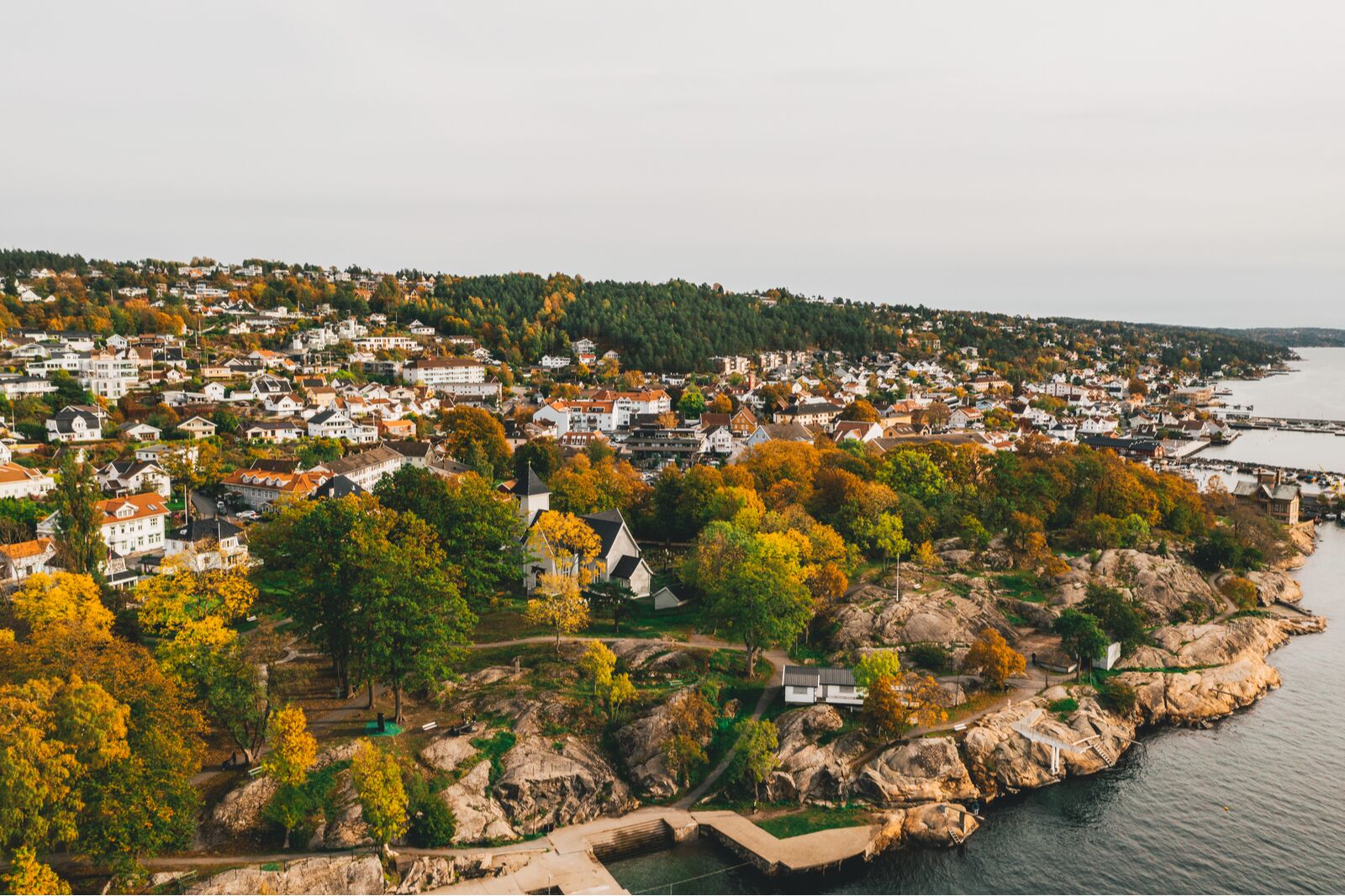 The hotel is in an idyllic town just outside Oslo. Photo: TheNorthern/Shutterstock

The hotel is close to the city in a tiny former town called Hvitsen and is only a 30-minute drive. Alternatively, guests can take a short train journey to the town of Vestby, followed by a 15-minute taxi ride to the hotel. Guests can also book the on-request bus service from Vestby (number 530). It’s included in the train ticket cost from Oslo, but must be arranged in advance.

If you opt for the latter, you’ll need to walk about 15 minutes along a path in the forest to reach the hotel. It’s a beautiful experience and highly recommended (unless you have very heavy luggage).

The painting that inspired a destination 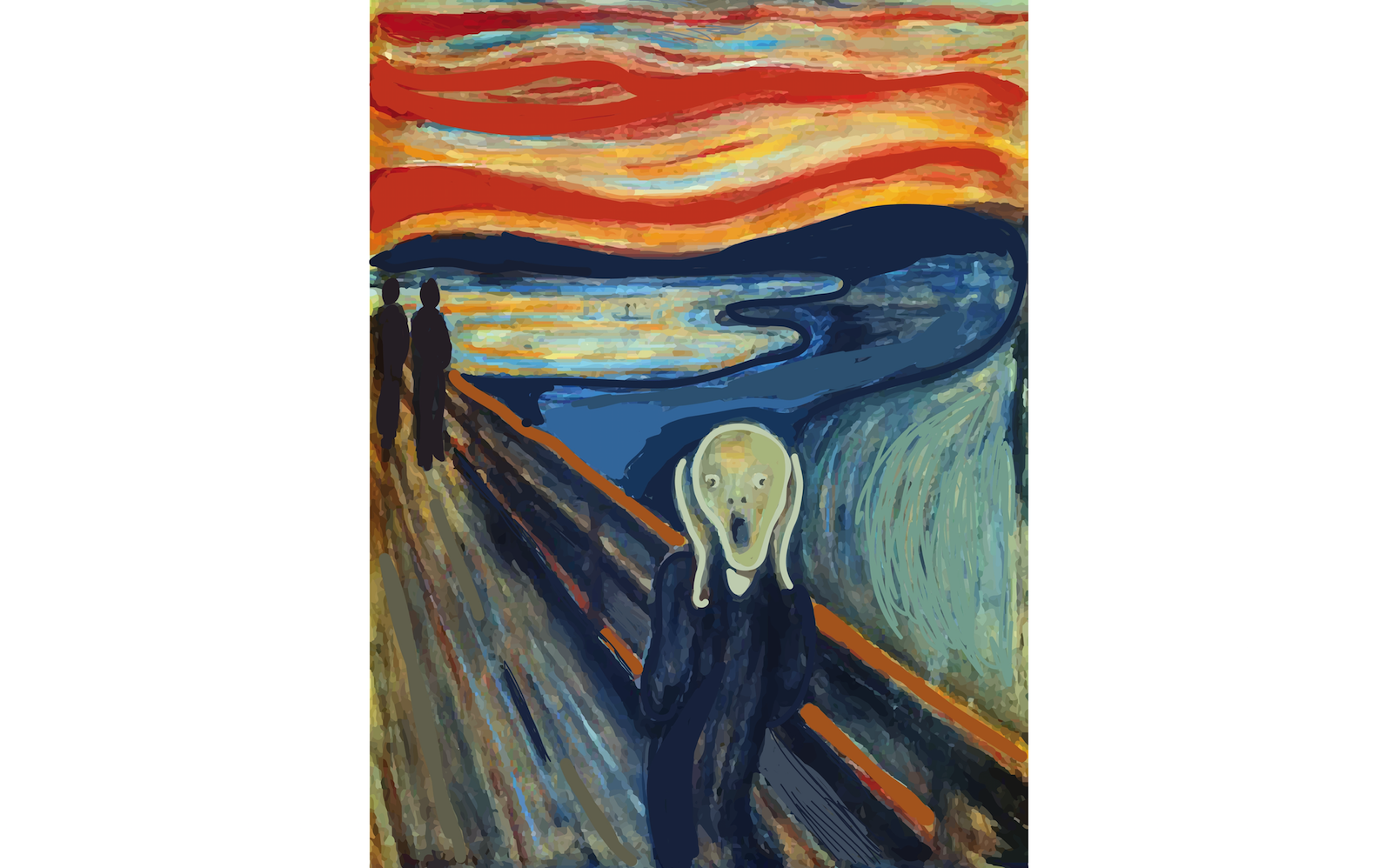 Rammefjord Hotell is the brainchild of Petter Olsen, a billionaire art collector who lives near the hotel. The idea for the high-end Oslo hotel first took shape after he sold one of four original versions of Munch’s 1895 painting “The Scream,” earning almost $120 million at a Sotheby’s event. It made history as the most expensive piece of art ever to be sold at auction, second in price only to Picasso’s “Nude, Green, Leave, and Bust.”

But due to its dark history, it seldom saw the light of day.

The Olsen family had been forced to hide the painting during WWII when the Nazis were on the brink of invading Norway, knowing that the Third Reich would brand the art “degenerate” and use that tag to justify looting it. It almost certainly would have been stolen, sold, or destroyed, along with over 30 other Munch pieces in the family’s collection, had they not stashed them all safely away in a hay barn in the mountains to avoid detection. Thomas, Petter’s father, ultimately fled to England during the war and later presented Munch’s “The Sick Child” to London’s Tate Gallery in a display of gratitude to Britain for taking him in.

Later, there was a war of a more personal kind between Petter and Fred, Thomas’ sons, over who would inherit the art collection after his death. Petter ultimately prevailed, but soon after, more dark history arose around the painting. Though Olsen did technically buy “The Scream,” it was potentially sold under duress by German-Jewish art collector Hugo Simon, whose descendants claimed the painting once belonged to their family. 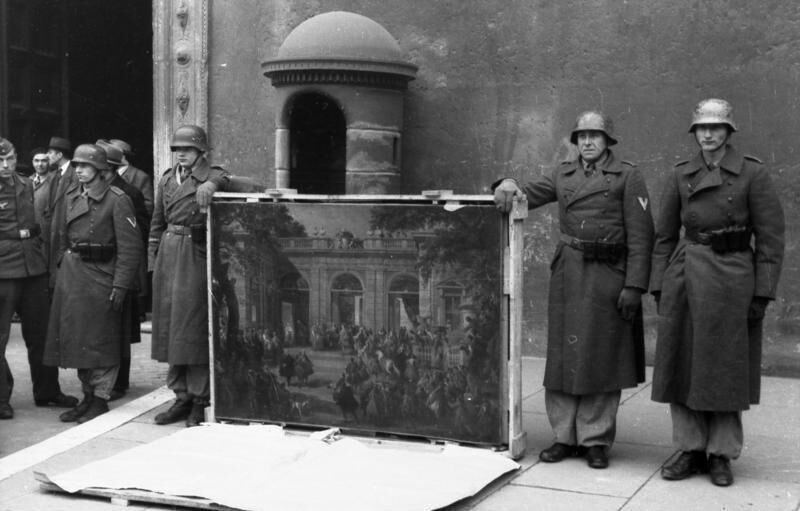 The Nazi Party was known to steal art from institutions and people, and reuniting families and galleries with their legally owned art is an ongoing struggle. Photo: Public Domain

Hugo had been declared an enemy of the state in Germany when the Nazis came to power in 1933 and had to flee the country, selling the art to Thomas Olsen in a rushed effort to unload most of his possessions. The Simon family has continued to lobby for the painting to be displayed with a summary of its history, highlighting it as one of many paintings with questionable ownership that were bought, sold, or lost during Nazi occupation.

History aside, the painting itself is rather dark. It depicts a man at a spot known for suicides near Oslo: Ekeberg Hill. Munch described the inspiration for the painting to friends, telling them he hallucinated a “blood red sky” with “tongues of fire above the blue-black fjord and the city” while walking. Some say the actual scream is a response to a forced acceptance of the modern era — though Ekeberg Hill was also in close proximity to both an animal slaughterhouse and a local psychiatric hospital, where one of Munch’s sisters had been staying for treatment.

Fifteen years passed between the creation of “The Scream” and Munch’s move to the countryside, where he became one of Thomas Olsen’s neighbors and friends. Today, guests of the Oslo hotel can take a short walk to Munch’s yellow house by the water and gaze at the same nature scenes Munch brought to life with his paintbrush over a century earlier.

Munch suffered from alcoholism, depression, psychosis, and even partial paralysis when he arrived at the property. Munch refused rehab, claiming he’d be fine if he could stay near the peaceful property. He used the surroundings as inspiration for his art, often employing female models to pose for him. According to the hotel staff, Thomas Olsen would deliberately crash his boat on the rocks to have an excuse to go ashore and meet Munch’s beautiful, siren-like models. 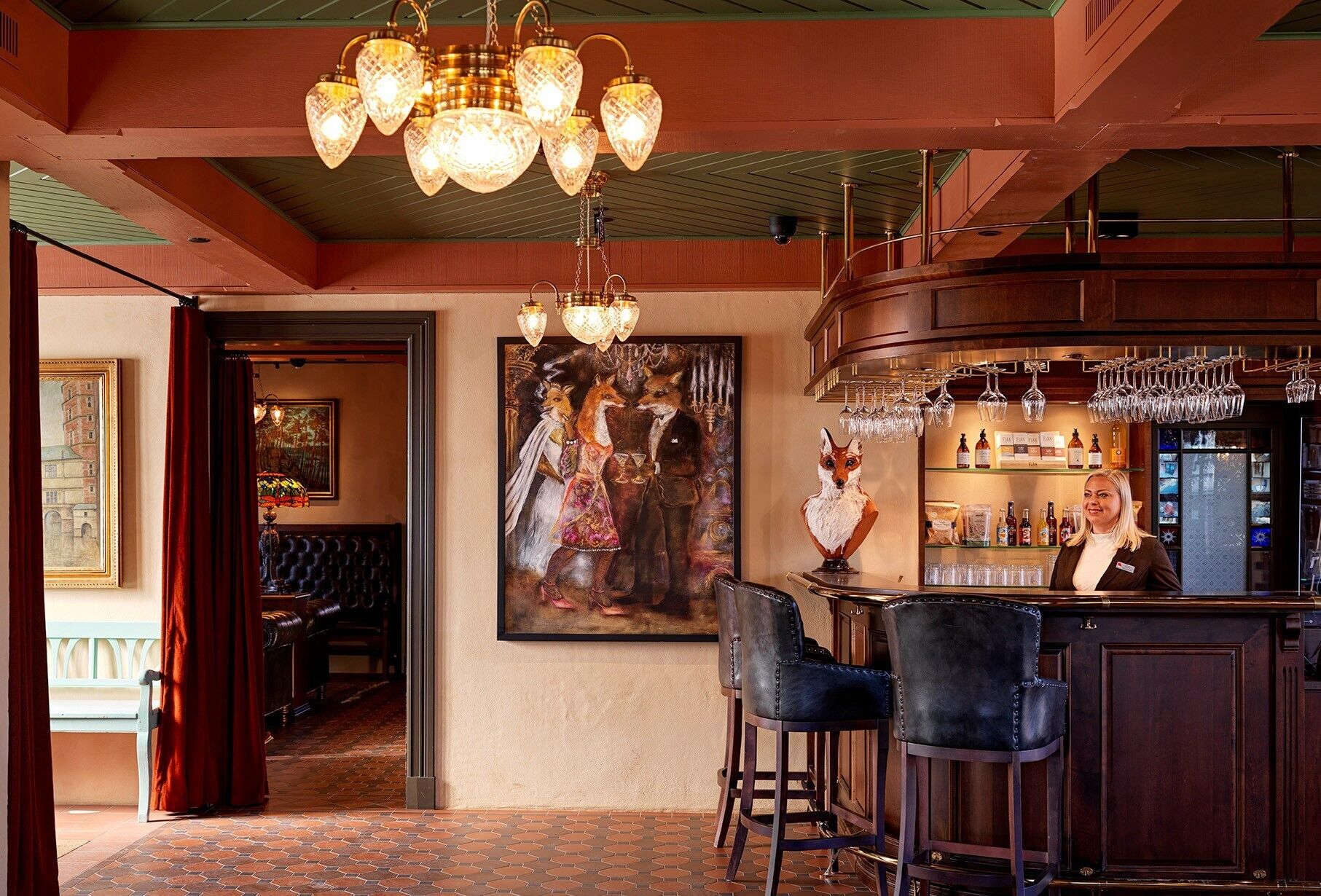 Today, the hotel is full of memories of Munch’s legacy. The majority of the 42 guest rooms feature replicas of his paintings. Guests can walk to Munch’s five-bedroom property for guided tours on the weekends, though they plan eventually for the home to be rented primarily for private events.

In Olsen’s mind, the modern translation of “The Scream” is a man expressing the anguish caused by global warming and environmental destruction – and consequently, he’s making Rammefjord as sustainable as possible. 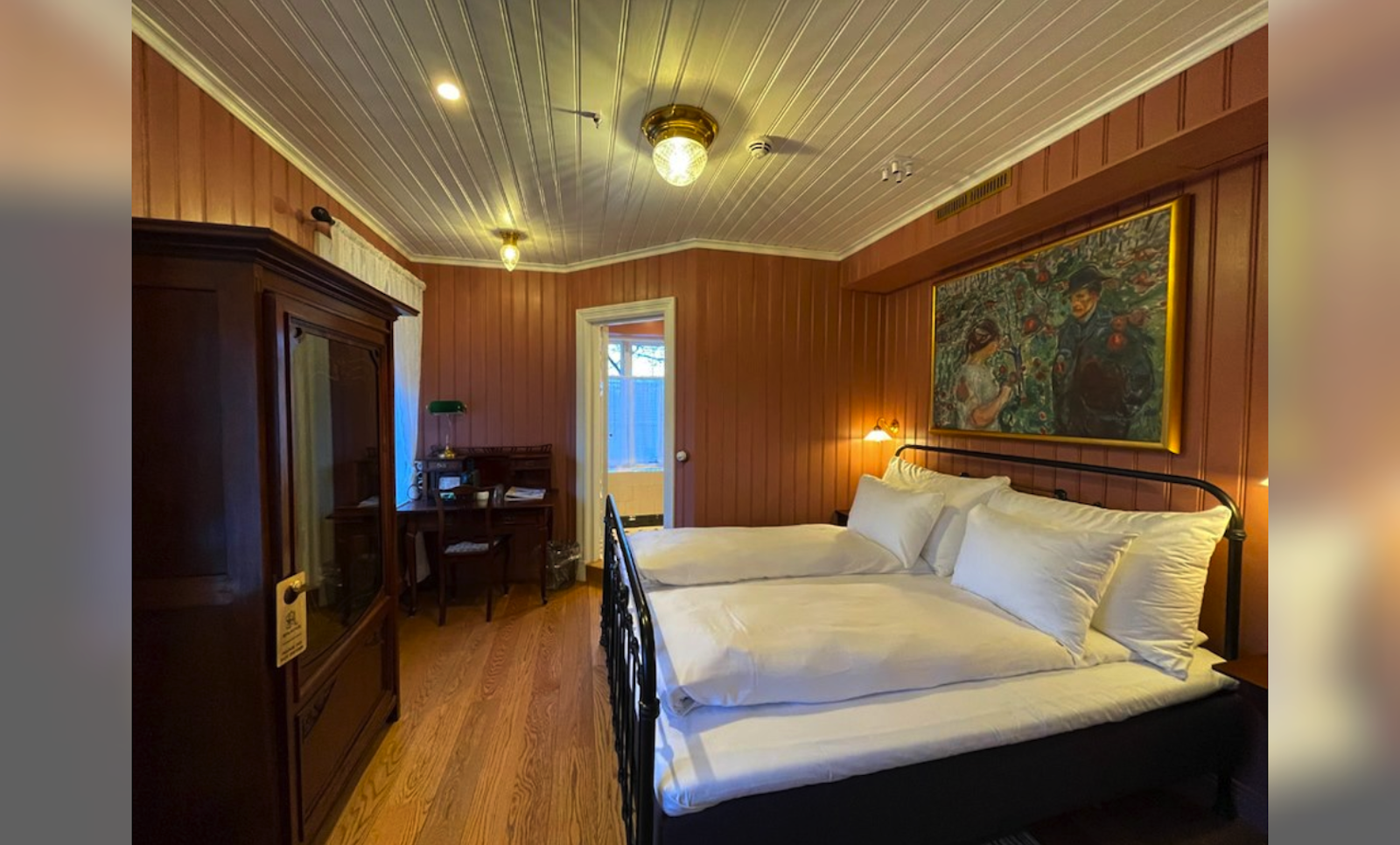 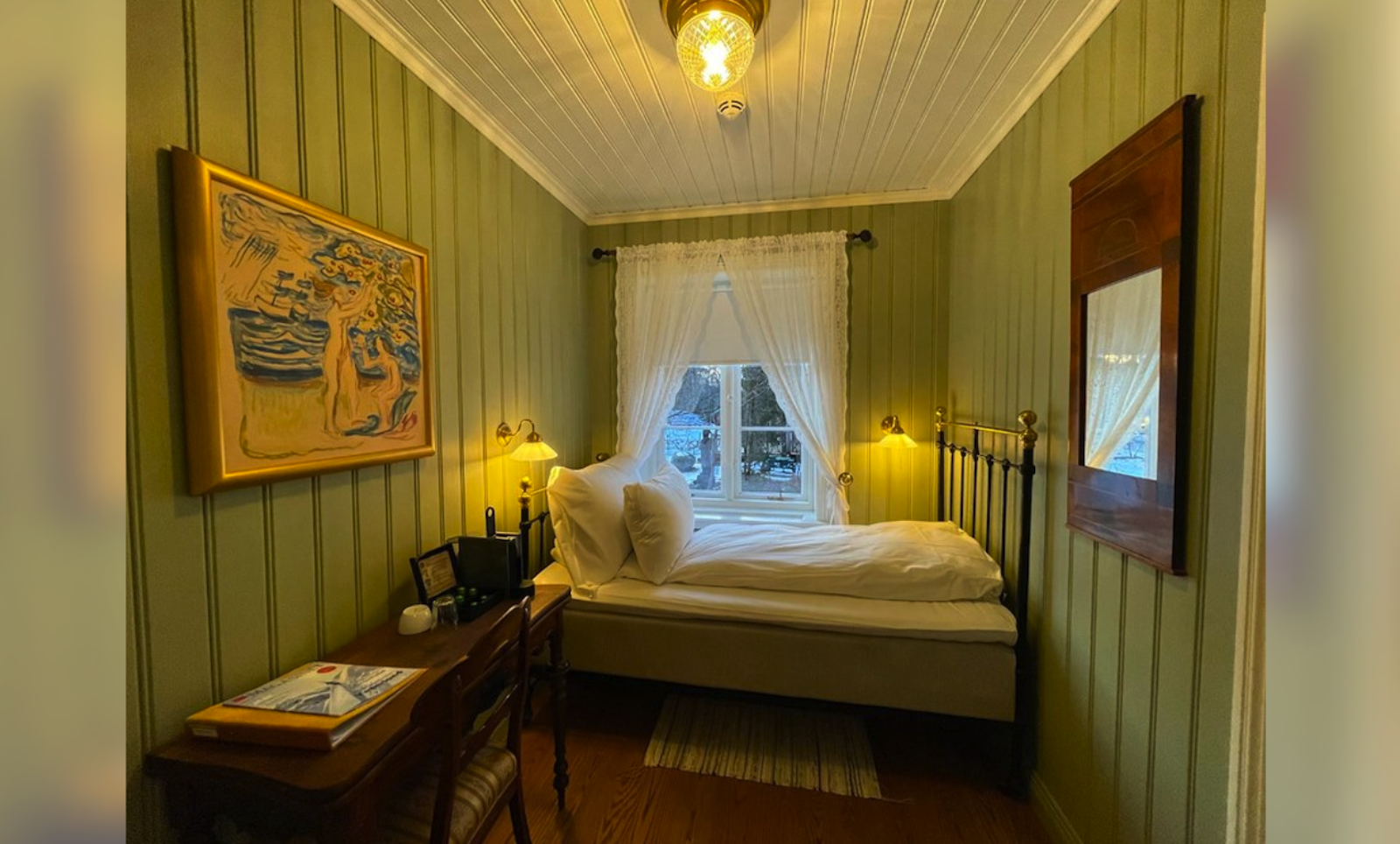 Rooms at Rammefjord are artistic, eclectic, and either Munch- or period-themed. Expect antique furnishings, including lamps from Marrakech, Persian carpets from Iran, and even an ornate bed that French leader Napoleon once slept in, complete with headboard cherubs. Most rooms have woodland views and replica Munch paintings inspired by the landscape.

Aside from Munch art, the hotel features art from local artists inspired by the woodland surrounds, including a fabulous painting of foxes and woodland creatures at a dinner party. 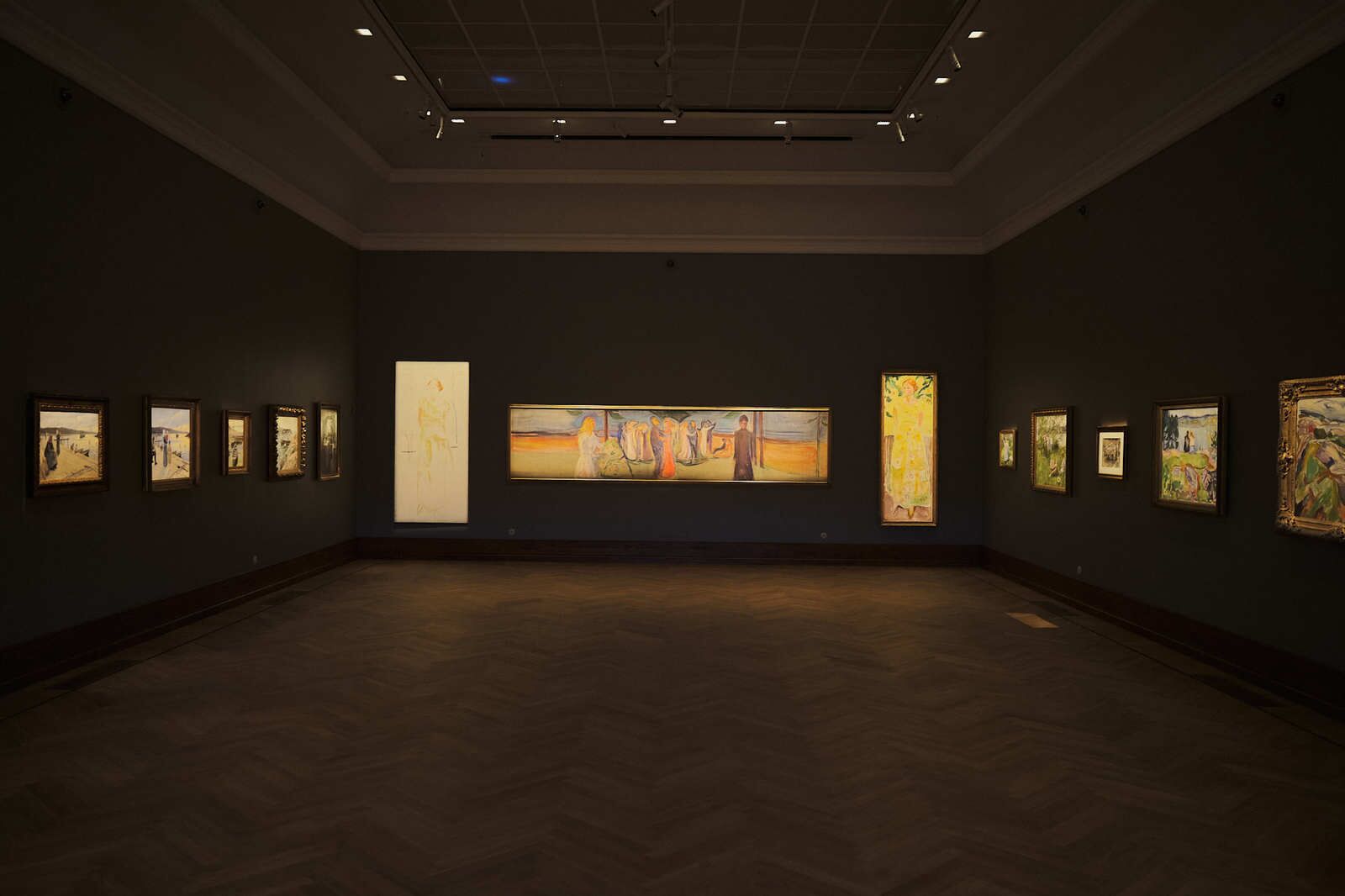 Perhaps the biggest draw at this Oslo hotel is the opportunity to see the on-site underground gallery — The Ramme Gallery. It’s exclusively for hotel guests and buyers of the property’s “culture ticket,” open every day between noon and 6 PM.

Try to arrive at noon as the staff unlocks the door to discover the world of Munch’s original paintings, as well as other notable Norwegian artwork, potentially without another soul in sight. Due to the intimate nature of the hotel, it isn’t uncommon to be the only person in the gallery, observing the artwork so closely that every bump of every brushstroke is visible. Low lighting preserves the most important paintings, but the paint shines and glints before your eyes nevertheless.

Oslo as an art destination 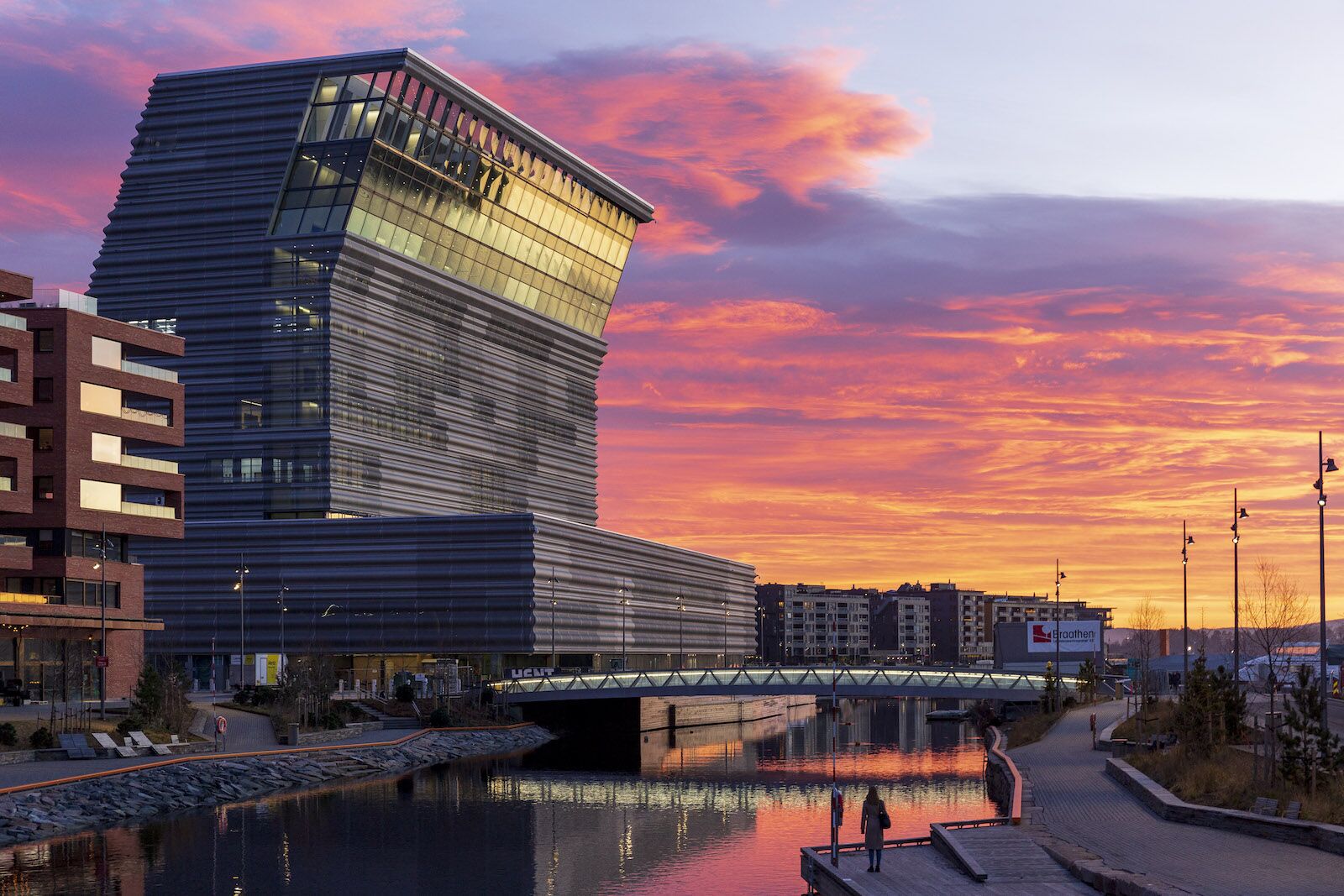 When you return to the city, a visit to the Munch Museum is virtually obligatory.

Though it’s a tourist attraction on a much larger scale, lacking the intimacy of Hvitsen, the Munch Museum displays some more of his original paintings along with text descriptions.

For an extended art fix, visit Oslo’s National Museum. It reopened in summer 2022 after three years of renovations and also includes an original version of “The Scream.”

Stroll down Karl Johan Street, where Munch rented his first art studio for a Munch-inspired walking tour (or if you can’t make it to the aforementioned Oslo hotel). Karl Johan Street is also home to one of the most prestigious Oslo hotels, The Grand, whose in-house cafe Munch frequented. He would actually trade his art in exchange for steak dinners at the restaurant.

Fans of the wider art scene should consider staying at the waterfront property The Thief near the city center. Besides offering stunning views from its balconies of boats bobbing along the water (enough to inspire any aspiring painter), guests of the hotel receive free access to the Astrup Fearnley Museum of Modern Art with just a flash of their room key.

10 Emotional Stages You Pass Through When You Visit Oslo

On My Way To Work: Oslo, Norway

What NOT To Do in Norway