Take enough flights around North America and it’s inevitable that you’ll pass through Atlanta on a frantic connection. Venture from the terminal and you’ll see the skyline spiraling up out of the dark green thicket, which earned this city the locals-approved nickname “The City in a Forest.” With a nation-leading 48 percent tree cover, Atlanta’s shady forests offer plenty of opportunities to escape from the everyday hustle of the unofficial (but also locally endorsed) capital of the South. But for a city known for its greenery, visitors rarely get past the world-class museums and diverse restaurant scene. Heat and humidity be damned, Atlantans know there’s a lifetime of rolling rivers, singletrack trails, and placid lake coves to explore. Here are six outdoor adventures to try on your next trip.

Way down yonder on the Chattahoochee, a river runs through it 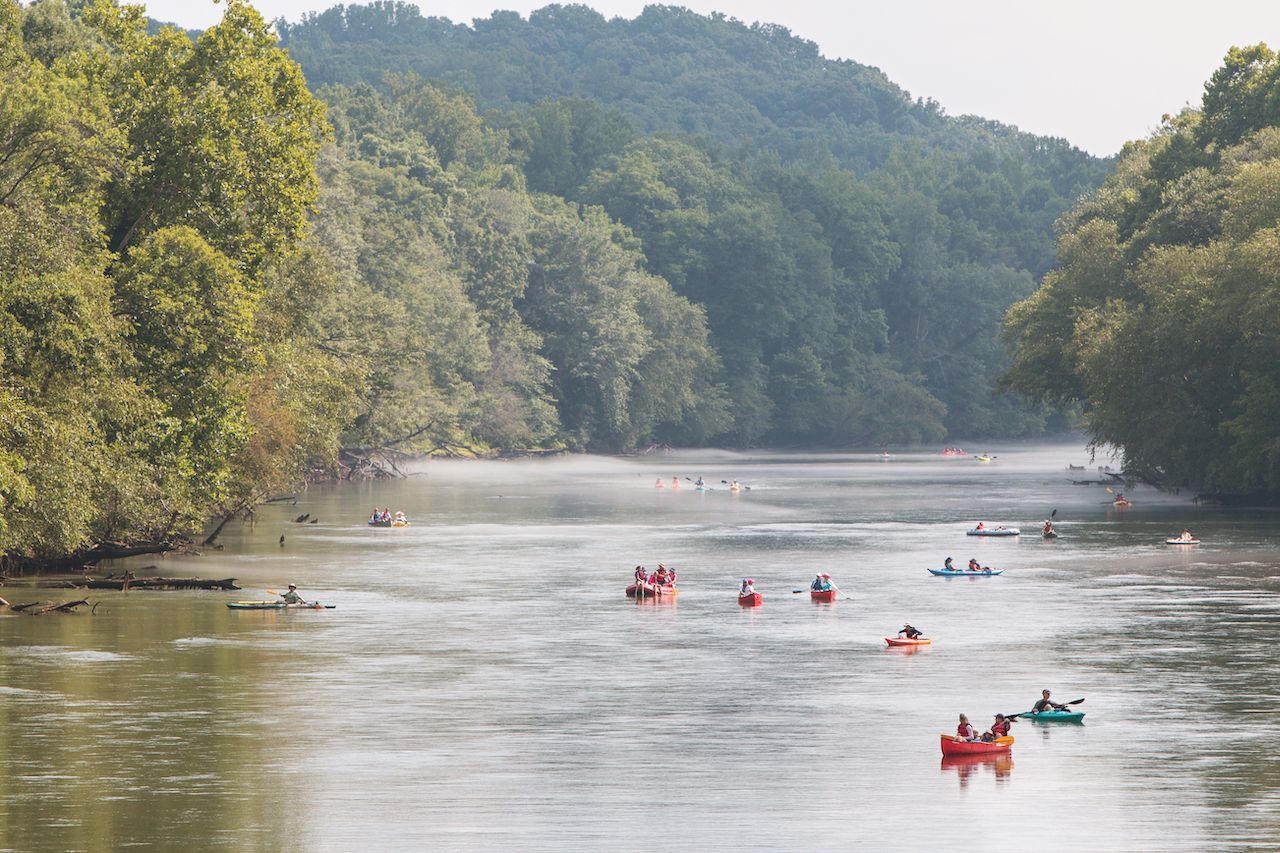 It may seem like Atlanta doesn’t have a hallmark body of water, but the Chattahoochee River punches above its weight. Starting in the North Georgia mountains, the river hits its stride in Metro Atlanta where you can catch trout in the morning, shoot some rapids in the afternoon, and grab cocktails along its banks at sunset. The 48-mile stretch through Chattahoochee River National Recreation Area has a few great paddling options. For a quiet, half-day canoe trip, put in at Abbott Bridge and take out just past the easy, Class 1 rapids at Jones Bridge. Closer to downtown Atlanta, Powers Island to Paces Mill is a classic half-day summer float with friends. Set your own shuttle and bring your own tube, or for about $25, local outfitters like High Country Outfitters will do the work for you. The Class 1 and 2 rapids offer a good excuse to flip, just try not to spill your beer. 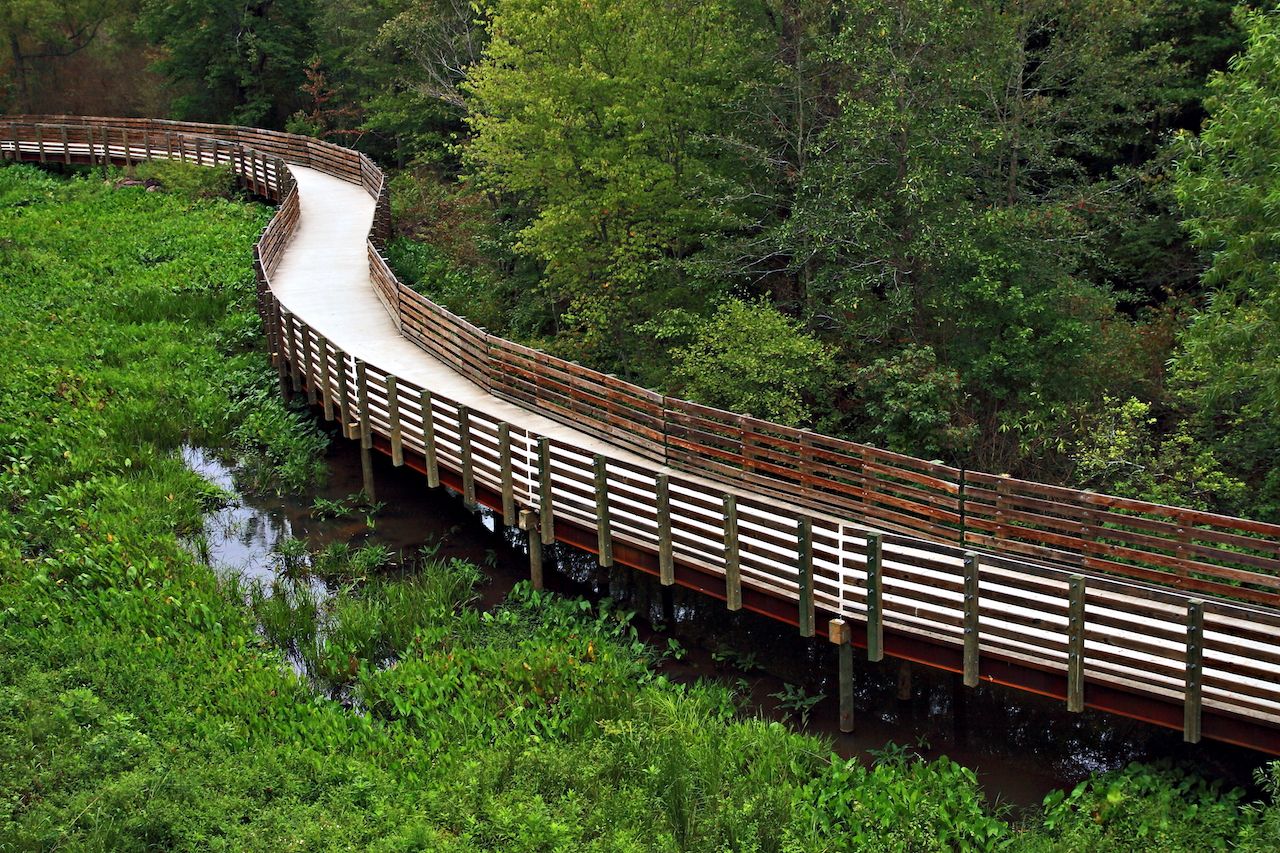 Atlanta was built on the success of railroads, and today that history is never more evident than on a bike. All across Georgia, historic rail lines are being repurposed as bike trails, including the chic Atlanta Beltline and the underrated Silver Comet Trail. The paved, 61-mile Silver Comet Trail starts outside of Atlanta’s perimeter highway (“OTP” to locals) and heads west. The most interesting section of the trail is the 15 miles between Dallas and Rockmart, where cyclists cross the Pumpkinvine Creek Trestle into Paulding Forest Wildlife Management Area and then pass through the Brushy Mountain Tunnel. If you’re looking for a harder ride, bring your camping gear and keep pedaling west into the hills, which climb up to the Appalachian Mountains in Alabama’s Talladega National Forest.

Views abound from the slopes of the Arabia and Panola mountains, crowds not included 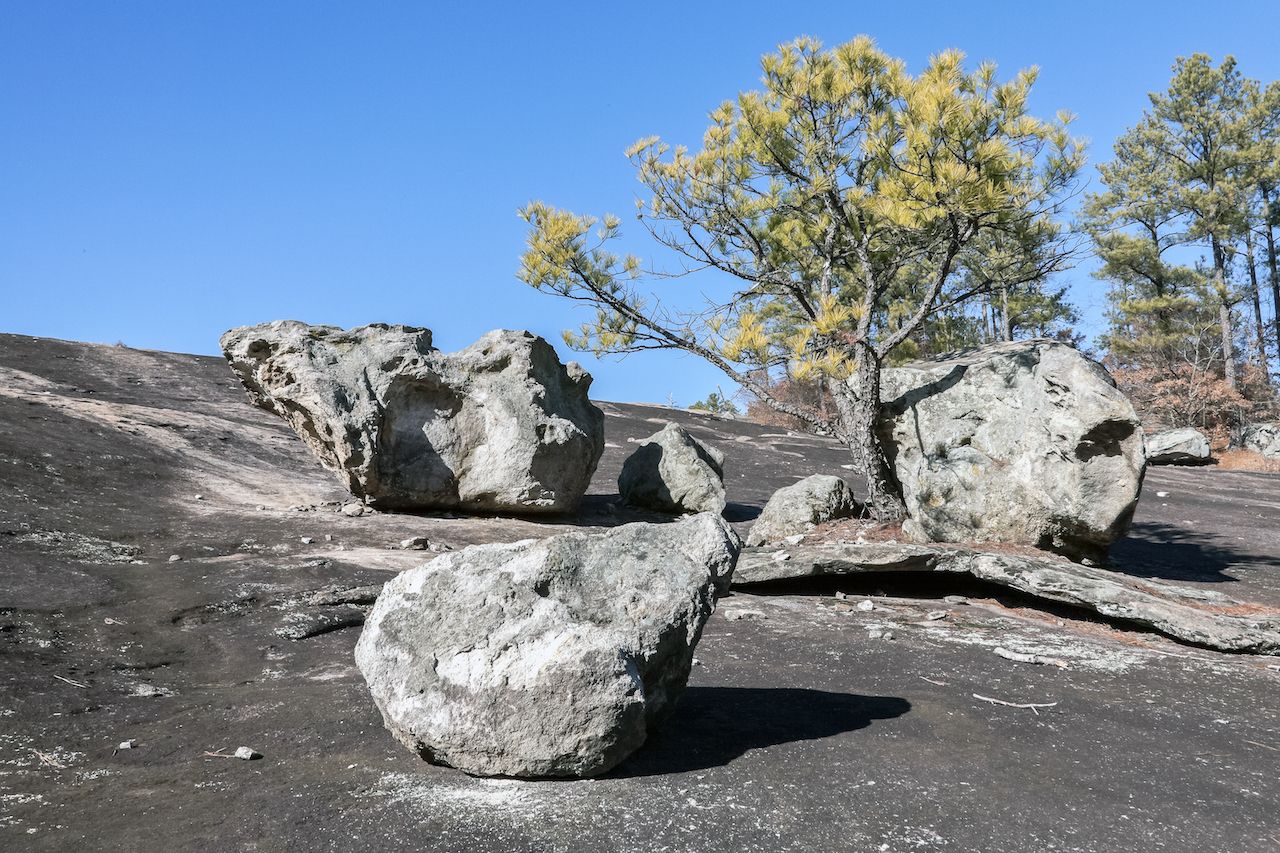 The view from Stone Mountain is good, if you can get past the crowds, Civil War carvings, and the gondola. Luckily, the Atlanta area has plenty of small mountains, each with their own character. South of Stone Mountain is Arabia Mountain National Heritage Area, a National Park Service-designated region. The 955-foot Arabia Mountain was historically a quarry. Now you can hike a gradual 2.5 miles to the top, ending with views of Atlanta and a sea of Piedmont forest. Nearby Panola Mountain is also in the National Heritage Area. Sign up for a half-day tour of Panola and its ecosystems led by a state park ranger. It’s the only way you’re allowed up to the top, plus you’ll learn about all of the endangered plants and animals that call these granite monadnocks — isolated bedrock hills — home. A word to the wise: If you must hike these mountains in summer, plan to go early or late, unless you’re a fan of sweating through your clothes in the first half-mile. 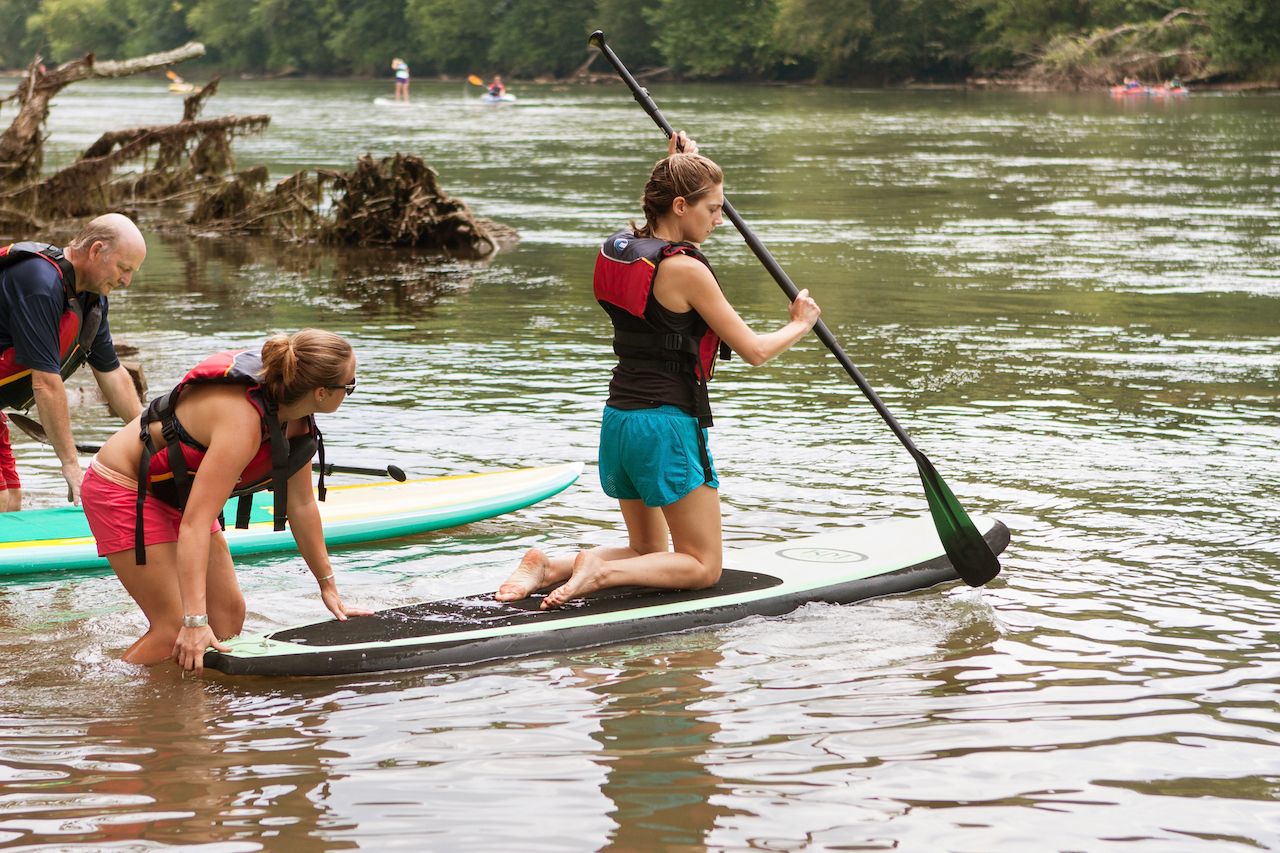 There’s a wealth of big lakes near Atlanta, but the small George H. Sparks Reservoir in Sweetwater Creek State Park remains a hidden gem. The 215-acre lake allows only non-motorized boats, so it’s the perfect place to spend a couple of hours getting acquainted with balance on a stand-up paddleboard (or SUP, for those in the know). The park rents out equipment, or you can launch your own stand-up paddleboard from the park boat ramp. Go whichever direction interests you, although make sure to head through the tunnel at some point. On the other side, you’ll find the marshy north end of the reservoir, which has fewer visitors and more wildlife. 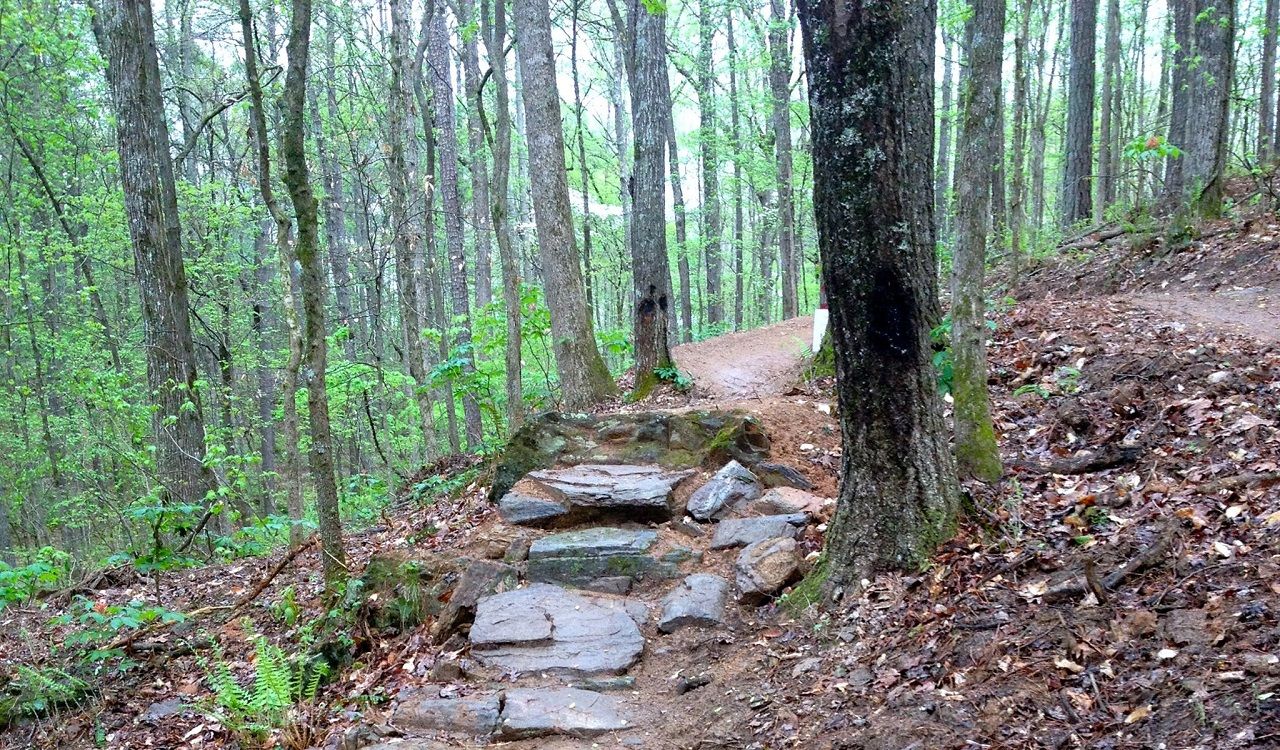 Mountain biking has exploded around the country, and Atlanta is no exception. For a quick fix, the Southside Park trails are the only purpose-built mountain bike trails on Atlanta property. If you’re a beginner, you’re in luck. Southside Park trails are a great entry to the sport, but experts can expect some gnarly additions to the trail system down the road. These trails are being built by the same trail builders of the 16-mile network at Blankets Creek. Check in with the Southern Off-Road Bicycle Association (SORBA) for trail status. Only 30 minutes north of Atlanta, Blankets Creek is worth the drive for experienced bikers looking for more of a challenge than can be found at Southside Park. Don’t underestimate these trails just because they’re not in the true mountains; there are plenty of hills, rocks, and roots. Best of all, the trails are by the water, so be prepared to take a dip to cool off after your ride.

Get a grip at Atlanta’s best boulders 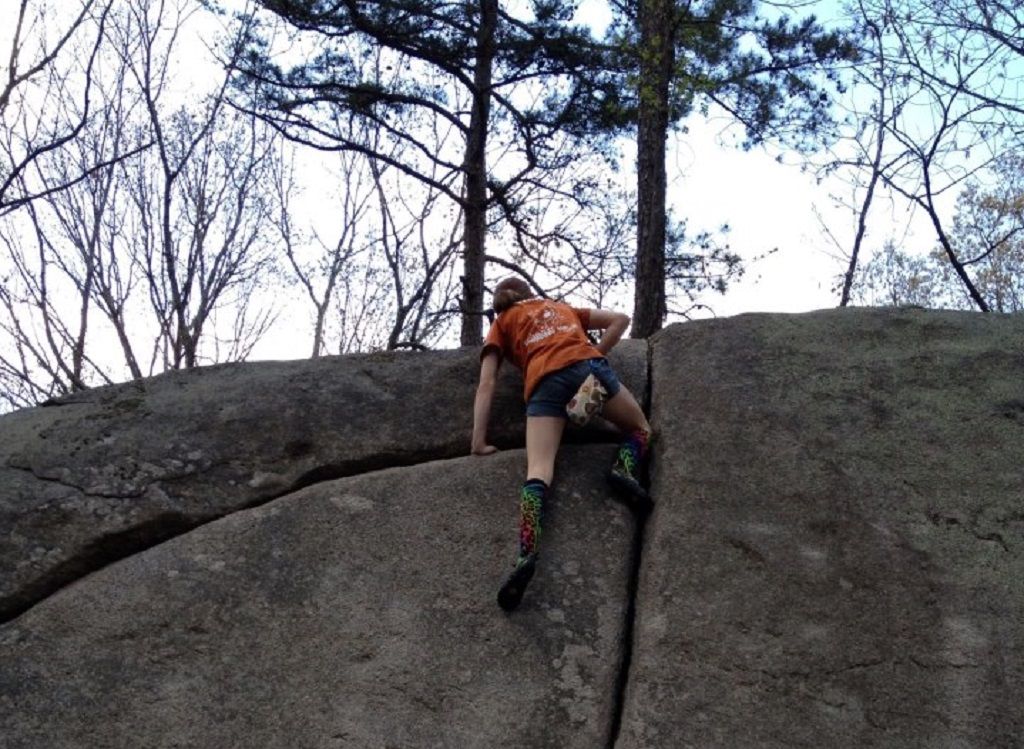 Atlanta has a handful of state-of-the-art indoor climbing gyms like Wall Crawler Rock Club. For most, indoor climbing is the extent of their climbing adventures. If you’re looking for more, head outdoors to one of the many bouldering spots along the Chattahoochee River. Boat Rock is a classic destination for both new and experienced climbers, with over 100 boulder problems ranging from easy to hard. For climbers, Boat Rock is a haven amid the sprawling Atlanta suburbs. But Boat Rock is hardly the only worthy climbing destination near the city. A smattering of rock is protected in Chattahoochee National Recreation Area, including beginner-centric bouldering at Island Ford and the Palisades. If you have some time to explore, Atlanta’s forests have a lot of rock waiting for you to find and climb.