A few months ago, on a trip to Baden-Baden, Germany, I met another writer who told me about a massive party her friend was organizing in Iceland. Not a party hosted in the VIP section of a nightclub, or someone’s house, but in a remote Icelandic fishing village called Thingeyri. Her friend, a London DJ named Jonny Ensall, had a grand vision for holding a 1970s-style disco party in one of the most remote places in the world. She told me I should go.

It was like when someone is clearly embellishing a story, and you say “that’s wild,” just to appease them.

Not for a second did I believe this party would actually materialize. Between the unlikely prospect of obtaining permission to upend this tiny village for a disco party and the logistical hurdles of actually getting guests and DJs to this remote town, the whole thing seemed like a pipe dream.

I wasn’t lying – it did sound cool. I just didn’t see it happening.

That’s why, when Ensall invited me to Iceland a few weeks later to cover the event, I was pretty shocked.

Ensall bills Detour Discotheque as “The Party at the Edge of the World,” and its goal is to revive the spirit of the New York City disco scene of the 1970s and ‘80s. He views the event as a wormhole to the past, and “this venue – this wormhole – opens in the most unexpected and amazing places around the world.”

When friends asked me why I was going to Iceland, explaining a ‘70s disco wormhole was exactly as tough as you’d expect.

“It’s a DJ party at the end of the world, in Iceland’s Westfjords, in a fishing village, under the midnight sun,” I told my friend who drove me to the airport.

“Sounds cool,” was all he said.

A night in Reykjavik

After a much-needed nap at Fosshotel Reykjavik, I met a group of three journalists (one of whom was, impressively, seven months pregnant) and a TikTok influencer – all based in the UK — at Apotek Restaurant. Here, we introduced ourselves over dinner and a Reyka vodka tasting. This was our only night in Reykjavik before taking a puddle jumper flight north the next day.

We were like elementary school kids looking forward to a field trip that our teachers had kept a relative surprise. We didn’t really know where we were going, what a “party at the edge of the world” meant, or whether it’d be fun or a flop.

Some people hate those tiny propeller planes with 20 seats and no air vents, backseat pockets, or window shades, but I love them. There’s a communal sense of nervousness that you just can’t replicate on a 747. 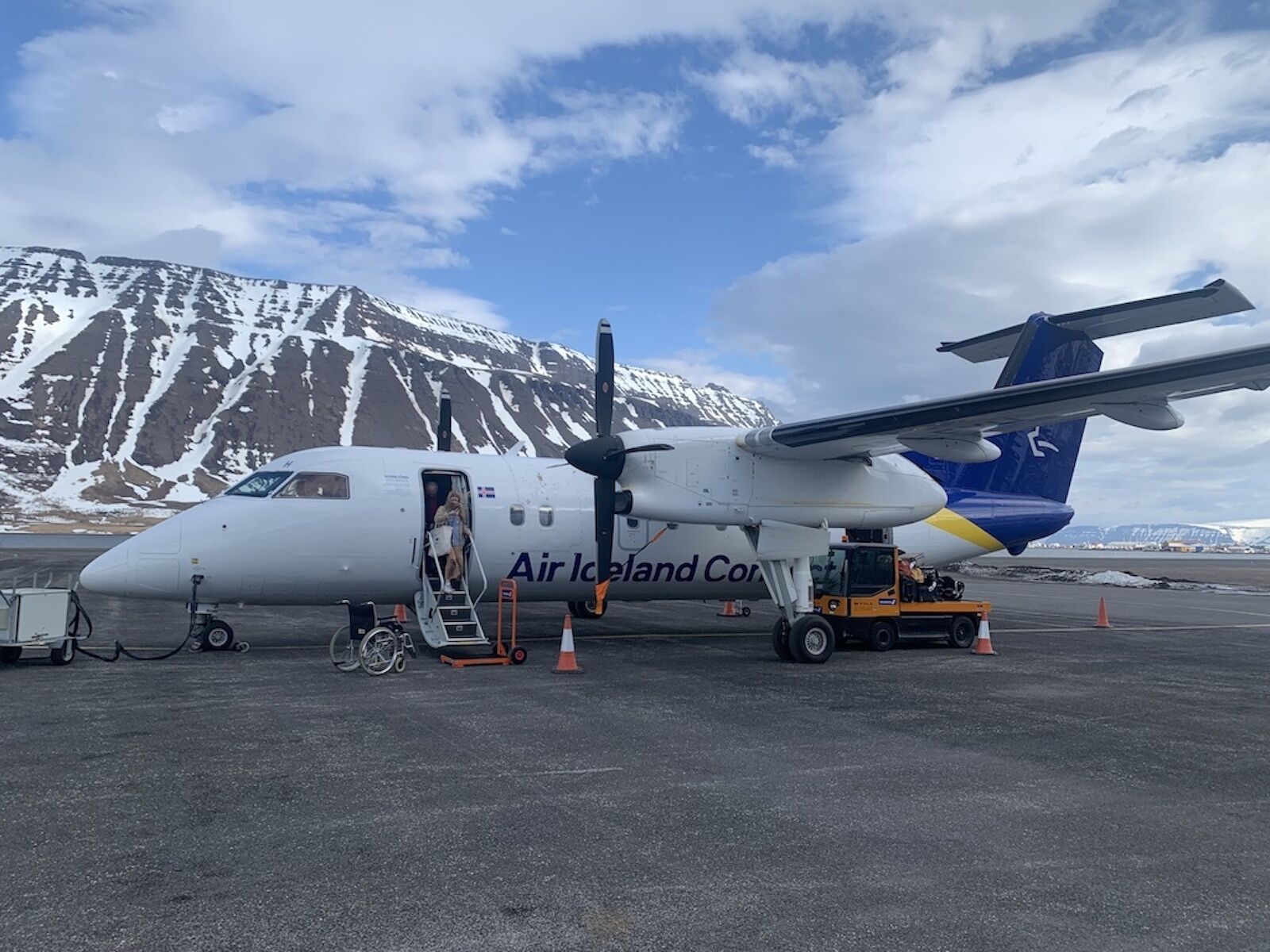 The plane landed without incident at an airport that looked more like a gas station. The Isafjordur airport has one terminal, no security, and a vending machine as the only food option. It might sound stark, but I was off the plane and en route to my destination within 10 minutes of landing.

We piled into our local guide’s van and drove approximately 40 minutes through winding fjords and snow-capped peaks to Thingeyri. In the low-hanging fog, the town of about 300 people seemed to materialize out of nowhere, sitting on the edge of a fjord like a small buoy anchored to the shore. Contrary to what you might expect from a town about to host a late-night disco party, there are no bars or restaurants in Thingeyri. There’s just a single cafe called Simbahöllin, a community center, co-working space (really taking remote work to a whole new level), and a town swimming pool (a staple of small Icelandic villages). 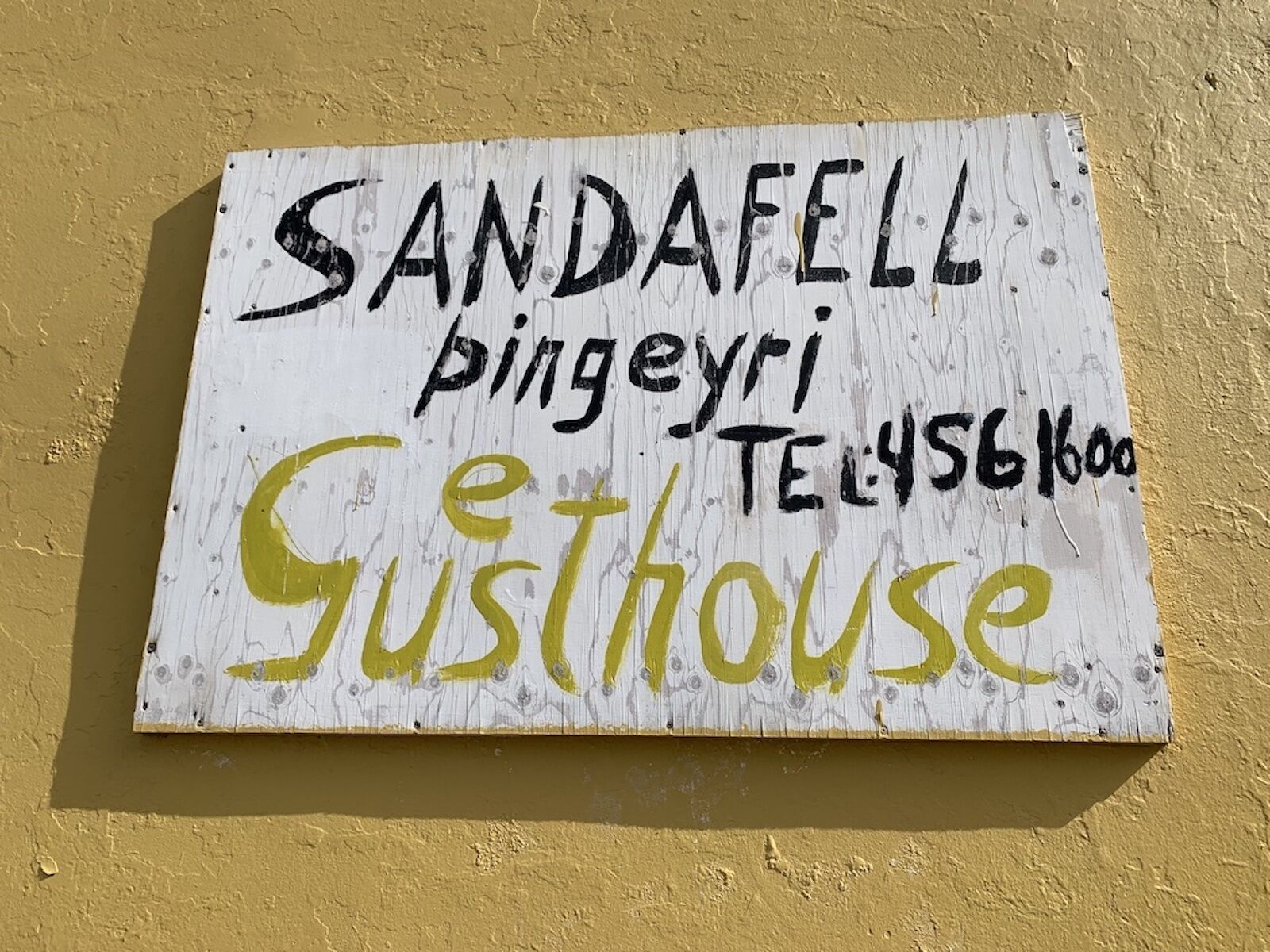 I couldn’t imagine a raucous pop-up nightclub in this seemingly sleepy village, though our hotel, Hotel Sandafell, did seem to be filling up with guests.

“Going to the party tonight?” I asked the front desk girl, as she showed me to my room.

“Of course,” she said as though I had asked if Iceland has waterfalls. “Everyone is.”

Everyone, indeed. The disco felt like a quirky Hollywood movie being filmed in a small town, where all the townspeople are actors. Held in the Thingeyri community center (or Félagsheimilið), the party may have been organized by a London DJ and his friends, but it was staffed and made possible by locals. The bouncers were two bearded residents who thought it’d be fun to wear black shirts and look intimidating for a few nights. The bartenders were seemingly college-aged students whose only prior drink-pouring experience involved fireball and solo cups. The balloons and other decorations filling the community hall were set up by local volunteers. It was immediately clear that this wasn’t an event being forced on Thingeyri, but one they embraced, and in which they were deeply invested.

The event kicked off at 9:00 PM. We flashed our pre-issued wristbands at the door, checked our coats, and hit the open bar. Since Reyka Vodka sponsored the event, the only liquor on tap was, you guessed it, Reyka Vodka. It came with soda water, tonic, juice, or – if you played your cards right – no mixers at all. BYOB was also allowed.

I tried to sip my vodka on the rocks slowly and responsibly, but it had been a long day. My British colleague drank his vodka soda like he was at a Newcastle stag party and immediately went for seconds. 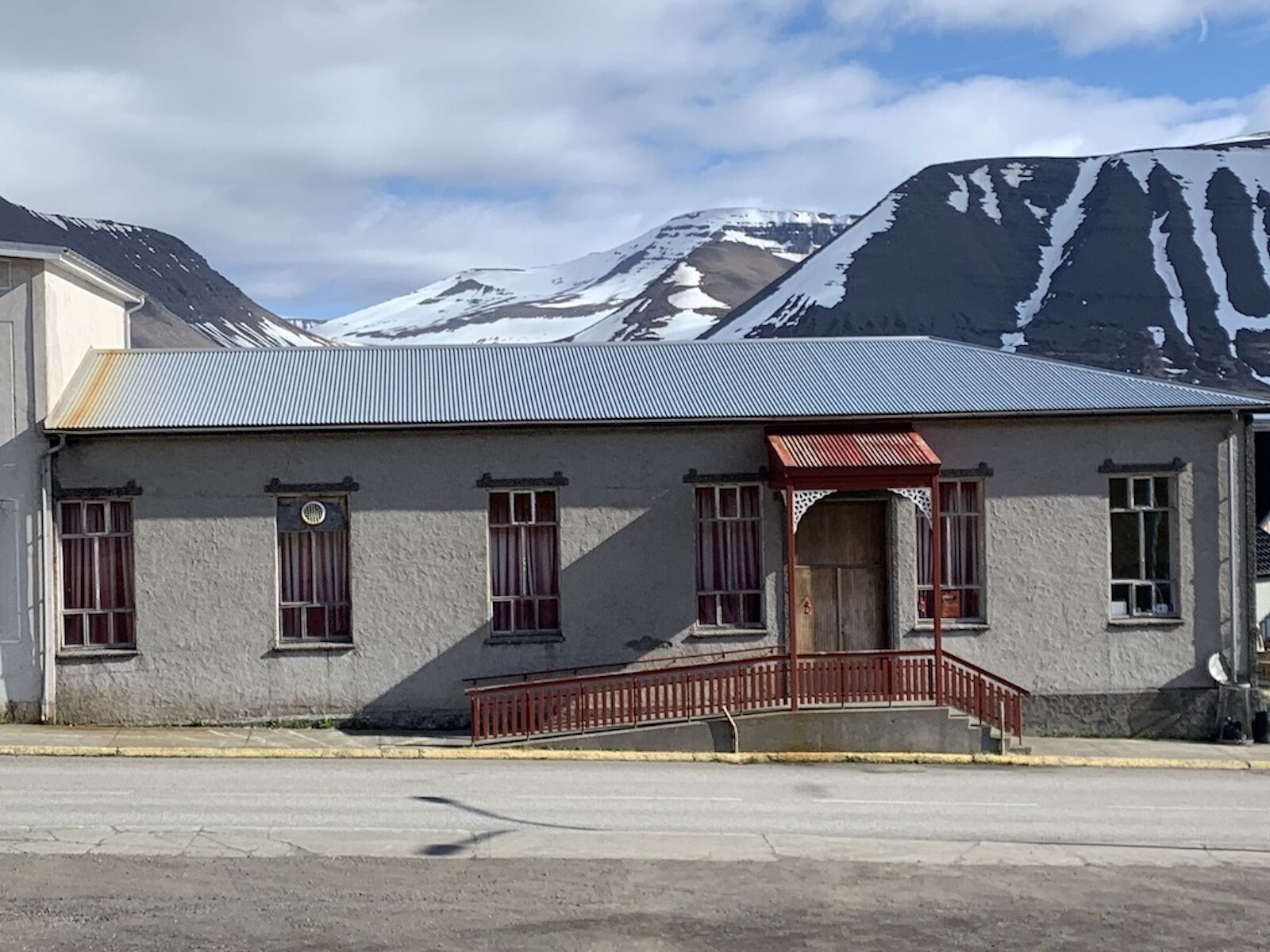 I had expected the party’s demographics to match those of the town (i.e. old fishermen), but about half of the 150 or so attendees were under 30 – many from the UK and Europe, and a huge Icelandic contingent from Isafjordur. It was refreshing to see so many Icelanders enjoying the event they so graciously hosted.

Though the start time was clearly advertised, the closing time was the ever-encouraging and dangerous “?” Midnight passed, then 1:00 AM, then 2:00 AM. I tapped out around 2:30 AM, impressed by how many people were still dancing. As I left with a journalist and the influencer, we looked behind us to see our pregnant colleague, admirably and soberly dancing into the morning hours.

Spending the day in Thingeyri

My press group was scheduled to spend the next day outside of Thingeyri, visiting a museum and brewery in Isafjordur. I decided to hang back.

“What’s there to do in Thingeyri?” another journalist asked me. “You can see the whole town in 10 minutes.” 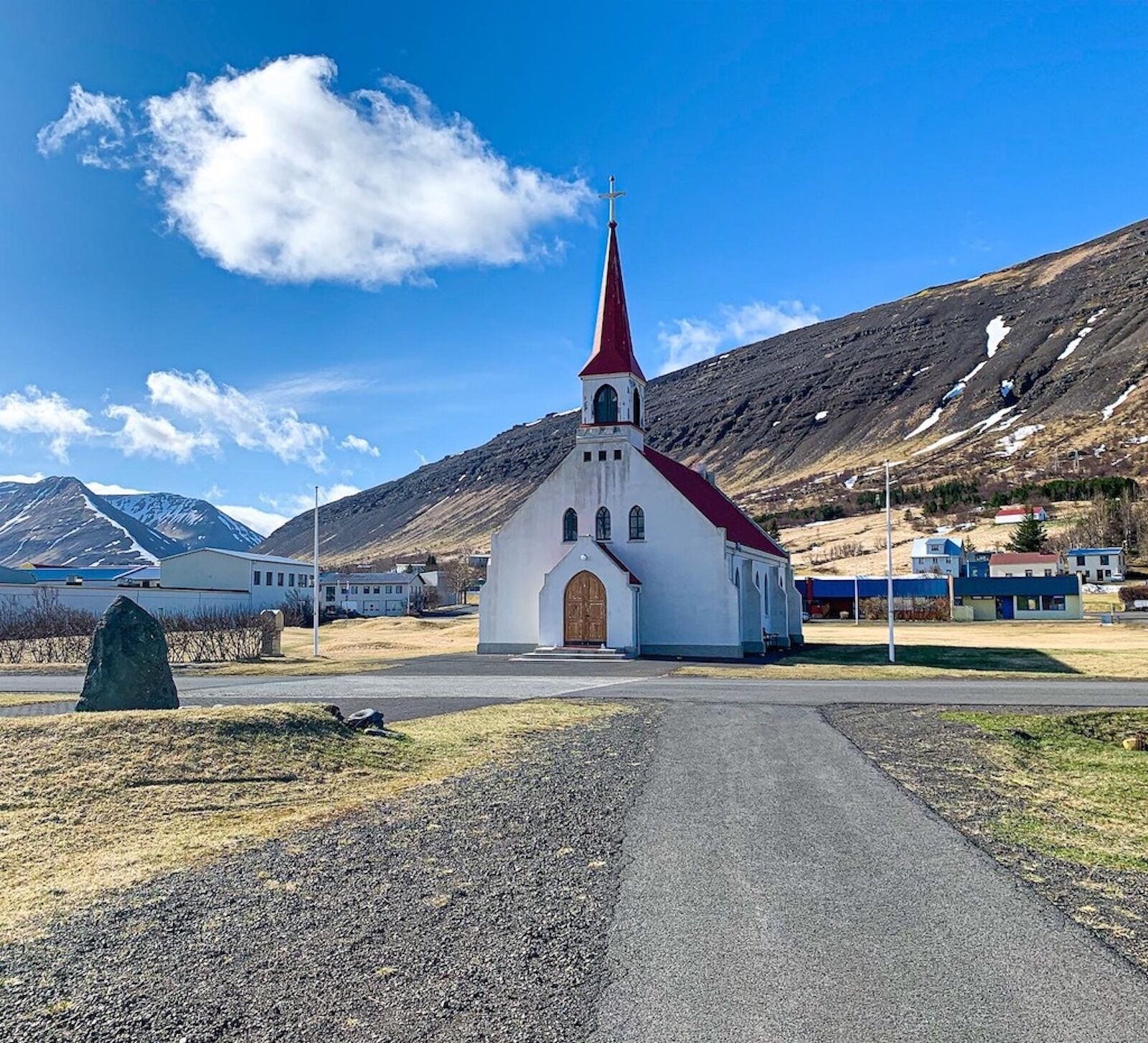 To me, the most intriguing part of this “party at the edge of the world” wasn’t necessarily the party itself, but Thingeyri, a village that daringly opened its arms to the madness of Detour Discotheque. Geographically, the village might be explorable in under 10 minutes, but truly understanding the place would take a bit longer.

I spent the morning in the Blue Bank (Blábankinn) co-working space. A striking blue building, the bank hosts workshops and facilitates startup ventures (I live in a town of 18,000 people, and we don’t have a place like this). It’s all run by a woman named Birta, who graciously unlocked the building for me and let me leech off the free WiFi.

That weekend, the bank also served as a makeshift base of operations for party organizers. I met people from Germany, Italy, California, and of course, Thingeyri. From discotheque organizers to DJs to visiting remote workers, all seemed mildly hungover from the night before.

“Have you tried the waffles?” a local photographer asked me. He was working on the couch across from me.

It was a stupid question. The Simbahöllin cafe was the only place in town that served food.

“They do the best waffles you’ve ever had. Trust me.”

A 12-second walk later I found myself at Simbahöllin, indulging in sweet potato soup, brown freshly-baked bread, and, of course, waffles. Located in an old Norwegian timber house, the cafe looks like an early 20th-century cabin converted into a three-room coffee shop, and smelled like a mix of waffles and cinnamon. 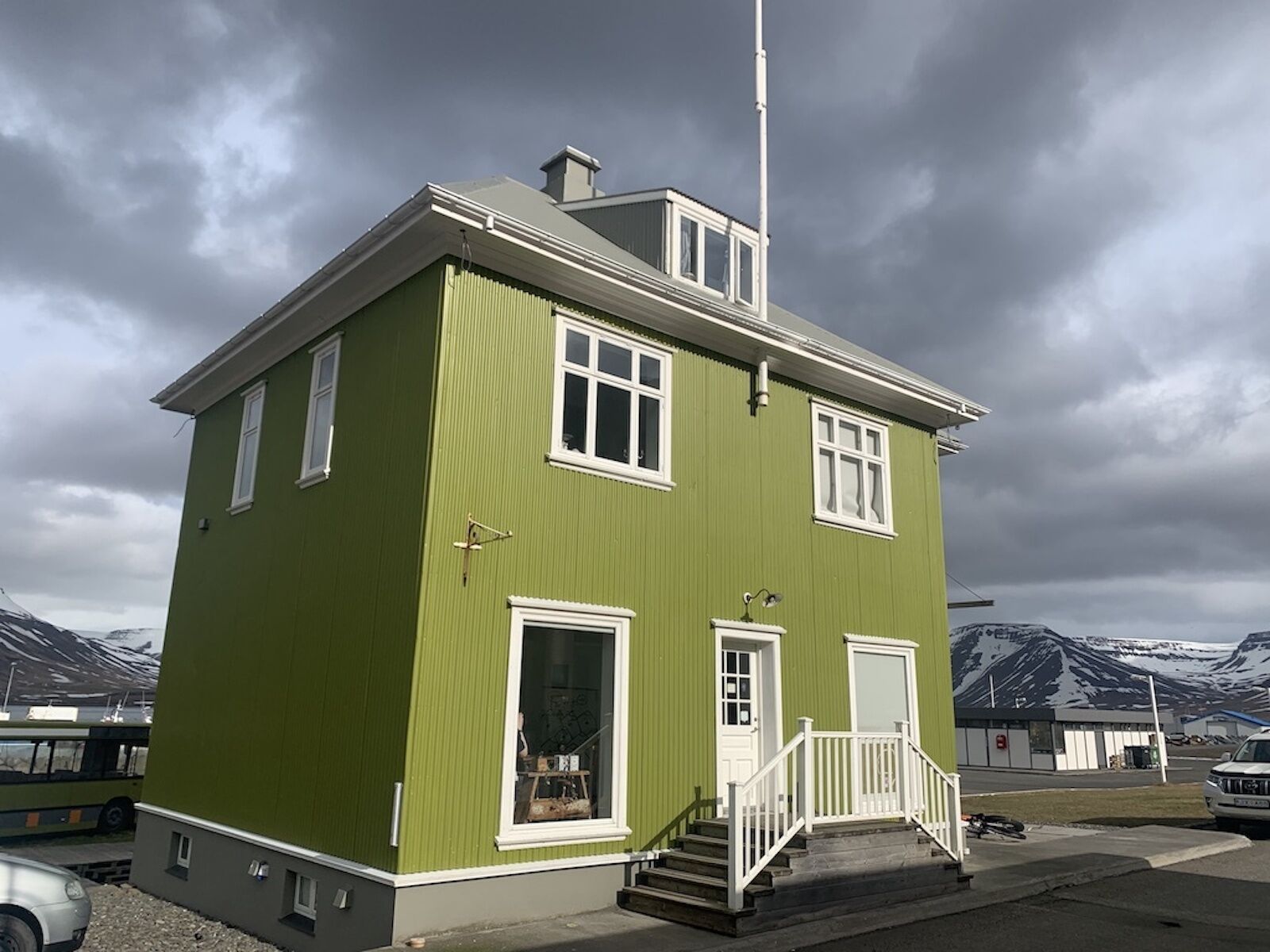 The lone “restaurant” in Thingeyri, it also seemed to be a crossroads for community socialization, like an office water cooler where people gathered to eat, chat, read, work, and linger. The owner sat at a table by the window, reading a book. A man I had seen that morning selling furs out of his house was trying to decide between a cinnamon bun or a waffle. On an old couch in the corner, a DJ from London perused a coffee table cookbook. Two women in swimsuits strolled past the window, in 36 degree weather, en route to the community pool.

In the Simbahöllin I was no longer a tourist in Thingeyri who was disrupting the peace of this minding-its-own-business village for vodka-fueled thrills. I realized, for the first time, that Thingeyri wasn’t merely the backdrop for a quirky disco event – it was the event, with colorful characters and a rhythmic beat that matched, or even drowned out, the disco music. Without Thingeyri, there could be no wormhole.

“Didn’t I tell you?” said the photographer, diving into his waffles a few seats away from me. “They taste like clouds.”

A second night of disco

The first night of the disco party, I had walked into the venue not knowing anyone except the journalists. Night two felt more like walking into my local bar on a typical Saturday night.

The photographer from the Blue Bank milled around the community hall taking pictures; the owner of Simbahöllin, pensively immersed in his book that afternoon in the cafe, danced like a wild man by the stage; Birta, who ran the Blue Bank, waved hello with vodka in hand; the women in swimsuits, earlier defying the Iceland chill, stood by the bar in gold, glittering 70s dresses – all while the DJ from the Simbahöllin couch spun disco remixes.

This was what Detour Discotheque was all about. Not recreating a glamorous ‘70s nightclub, or even throwing a debaucherous banger to rival the best of London or New York. It was about holding your breath with complete strangers while your propeller plane landed in a snowy fjord. It was about bringing people from all over the world together in an old community hall. It was about a guy from Boston sharing waffles with people from Iceland and London. The wormhole didn’t open when I entered the makeshift nightclub – it had opened when I set foot on the plane to the Westfjords. 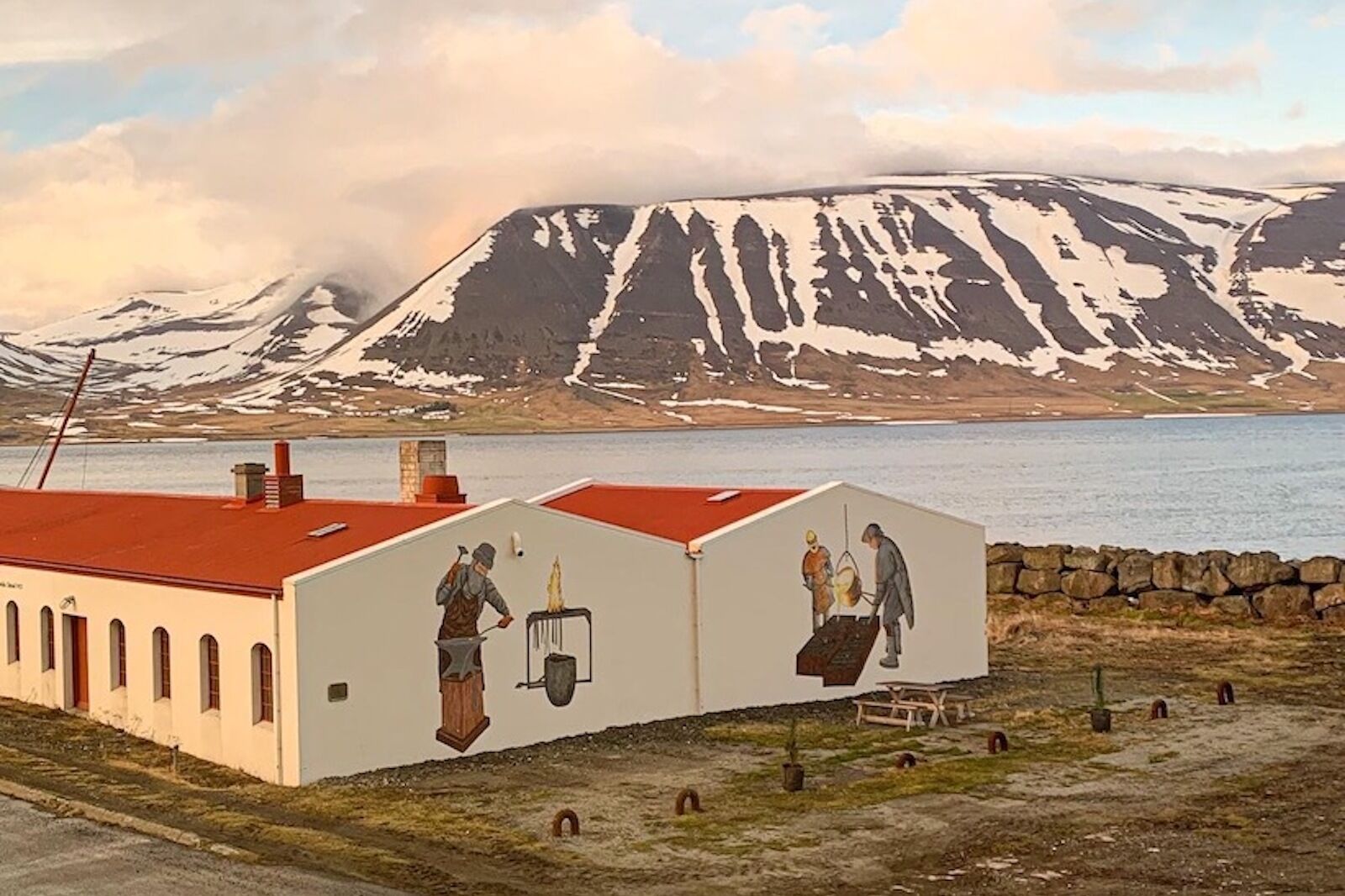 After three days in Thingeyri that felt like three surreal months, my press group left for Reykjavik bleary-eyed and hungover. I looked out the window as we glided too-close-for-comfort over snow-capped peaks. The journalist beside me bopped away to Hermigervill, an Icelandic DJ who had played the night before. The influencer was immersed in her phone, filtering her memories for public consumption.

“Next year, everyone?” we asked each other before parting ways at the airport, a vague promise to reconvene for the next Detour Discotheque – wherever in the world it might be.

LanguagesThis Guide To Icelandic Will Have the Locals Guide You To All the Secret Waterfalls
Tagged
Festivals Iceland
What did you think of this story?
Meh
Good
Awesome