It was 6 AM sharp. I was totally alone, sitting in the long shadow of Petra’s most famous monument. Two miles away, along a thin dusty trail through a maze of towering slot canyons, the gates to Jordan‘s Lost City of Petra were just opening to the public. Over the next several hours, a steady stream of visitors from around the globe would filter through the turnstiles toward the famous facade of the Treasury. This small space would quickly fill with tourists. But I had beat them to it. I was already basking in the desert silence and photographing the handful of scarf-laden Bedouin residents with their colorfully adorned camels.

We hope you love the Indiana Jones Bedouin Cave Airbnb! Just so you know, Matador may collect a small commission from the links on this page if you decide to book a stay. Listed prices are accurate as of the time of publication.

Although the spectacularly photogenic faces of both the Treasury and Monastery have become synonymous with Petra, there is far more to the historical city. Truthfully, spending less than two full days inside the park allows you only to scrape the surface. There are ridgeline hikes to panoramic teahouse lookouts, a wall of tombs, and countless photo-worthy vantage points to view the most famous sites. Petra is large and wild enough to allow you to feel like an explorer, even while being one of the most visited tourist attractions on earth.

But by no means is it empty. Bedouin men with kohl-rimmed eyes ride horses, donkeys, and camels throughout the park, offering rides and guided tours. Markets fill the dusty paths of the park daily, congregating near the most-popular monuments. These shops are kept by Bedouin women and children with limited means, hoping to make a living in the blossoming Jordanian tourism market.

There is a way to see this new world wonder without the crowds. The secret lies with the Bedouins. Specifically with a man named Feras; and his Indiana Jones Cave Home that he lists on Airbnb.

Arguably, the Lost City of Petra belongs to the Bedouins. For centuries, the nomadic indigenous group has lived within the park boundaries farming the desolate land and managing herds of goats. They carved trails through the pink-hued sandstone and lived in communal cave housing bored into the high-desert cliffsides. When Petra was “re-discovered” and deemed both a world-wonder and UNESCO Heritage site worthy of protection, the Bedouins were relocated to the nearby cities by the government of Jordan to avoid the destruction of the protected structures.

This transition from nomadic self-sufficient living to metropolitan life did not go smoothly for most, and 35-50 families have since returned to the park and their cave homes. Technically, illegally. But the Jordanian government has done little to remove or deter them. 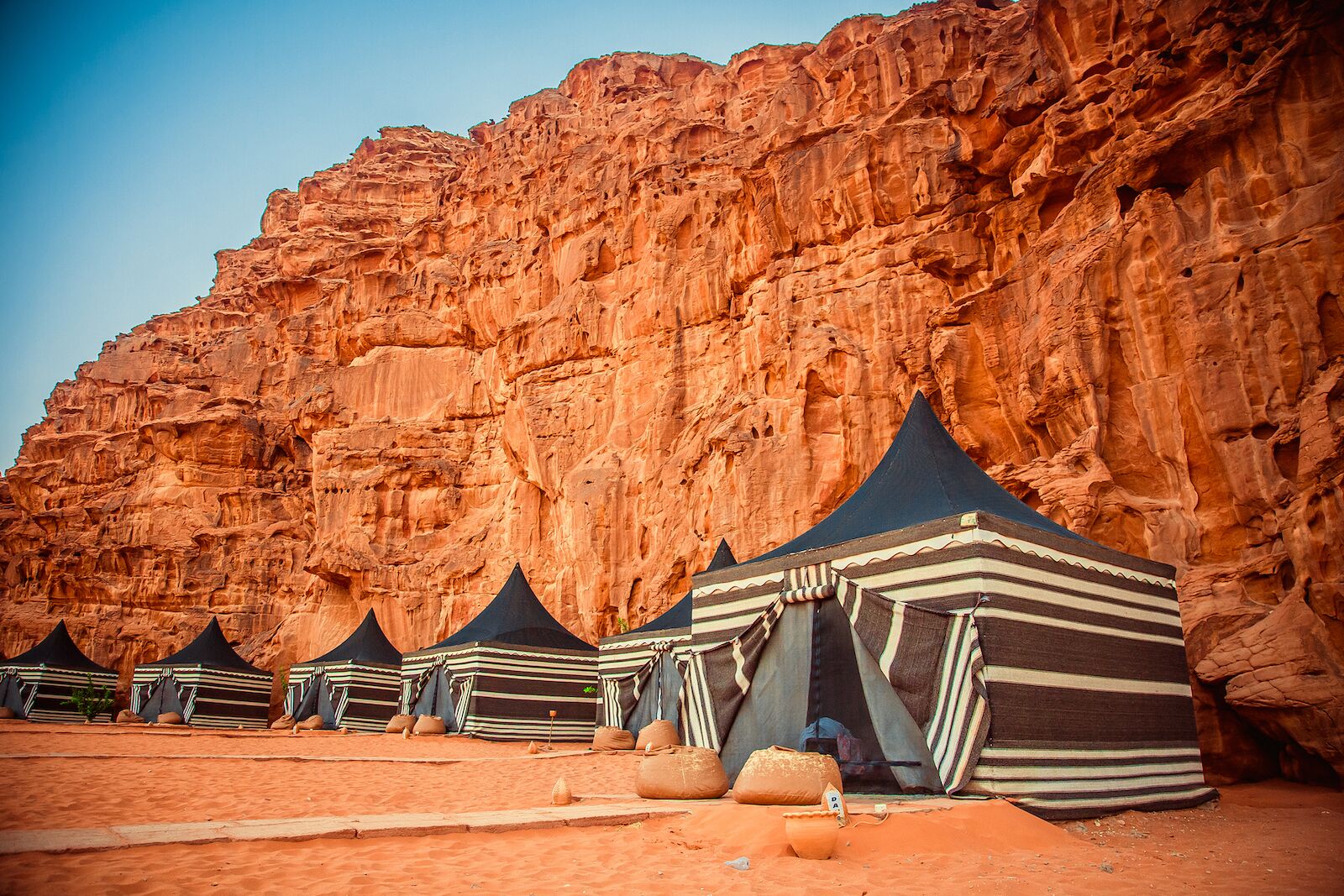 Feras is the head of one of these families.

His Indiana Jones Airbnb Cave is a traditional Bedouin dwelling with two cavernous rooms hollowed into the sandstone cliffs deep within the park boundaries centuries ago. One room, the Airbnb rental, is adorned with colorful woven rugs spread across the floor and three beds loaded with blankets for chilly nights.

Postcards from previous guests turned long-time friends cover the walls. Outside you’ll find a coal firepit overlooking a scenic canyon framed by jagged peaks. The cave next door has a small kitchen and loads of floorspace where Feras sleeps, usually joined by a handful of other Bedouins who linger long into the night eating, drinking tea, and smoking shisha.

Cave Airbnb guests arrive in Petra just like anyone else. On foot. Feras meets and welcomes you at the iconic Treasury. You’ll then hit the trail together to the cave for a hot cup of tea and an introduction to the desert landscape. From here on out, you are free to explore as much or as little as you wish.

For an extra fee, you can enjoy breakfast, lunch, and dinner at the property. I highly recommend a fireside dinner beneath the stars after a long day exploring Petra on foot. It’s not uncommon to traverse ten or more miles in a single day while attempting to make it to all the most popular sights.

The obvious benefit to sleeping in the Indiana Jones Cave is your exclusive access to the Treasury and Monastery without the crowds. You shouldn’t leave your cave until the park gates officially open to abide by park laws. But with your significant headstart, you’ll beat even the earliest risers. 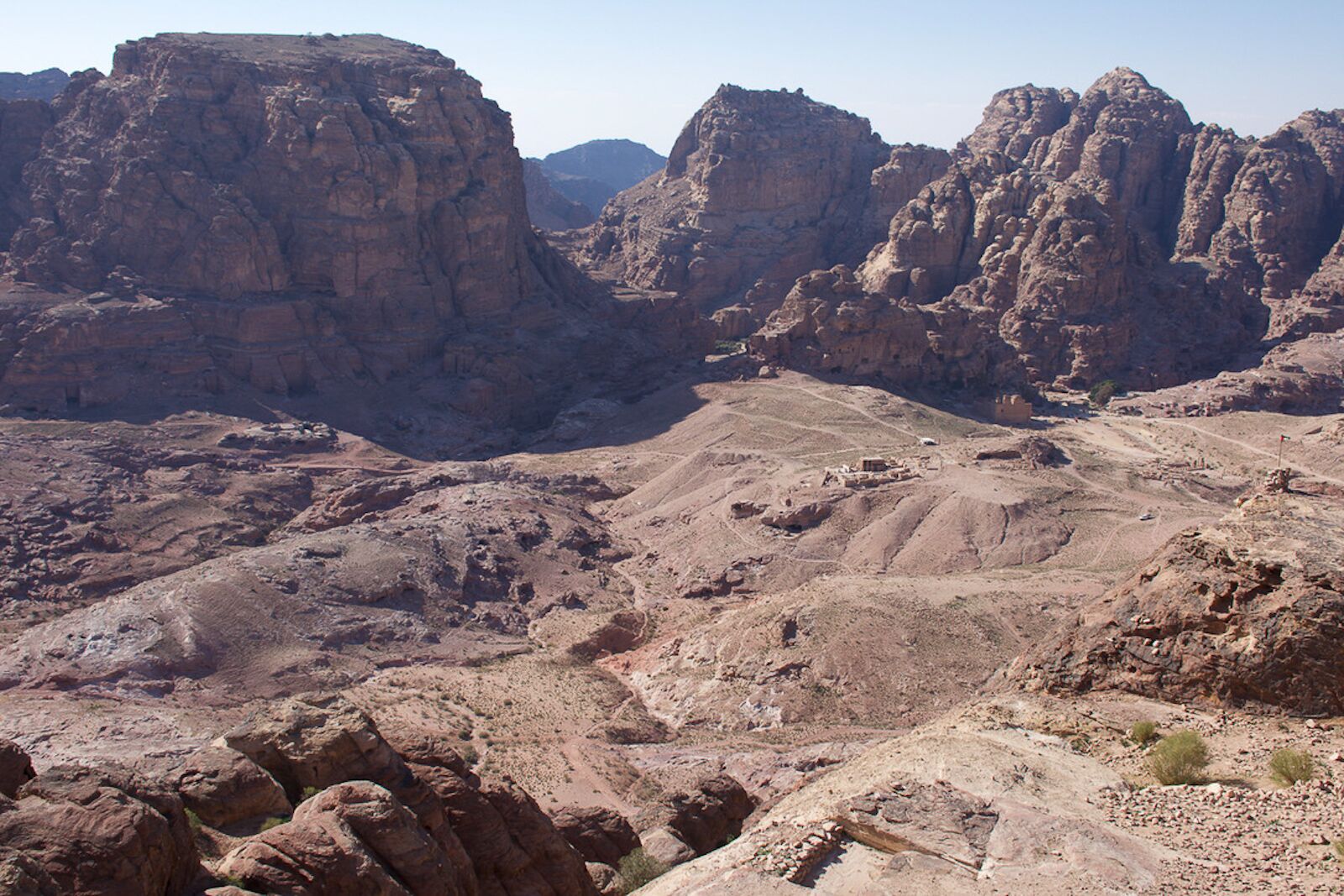 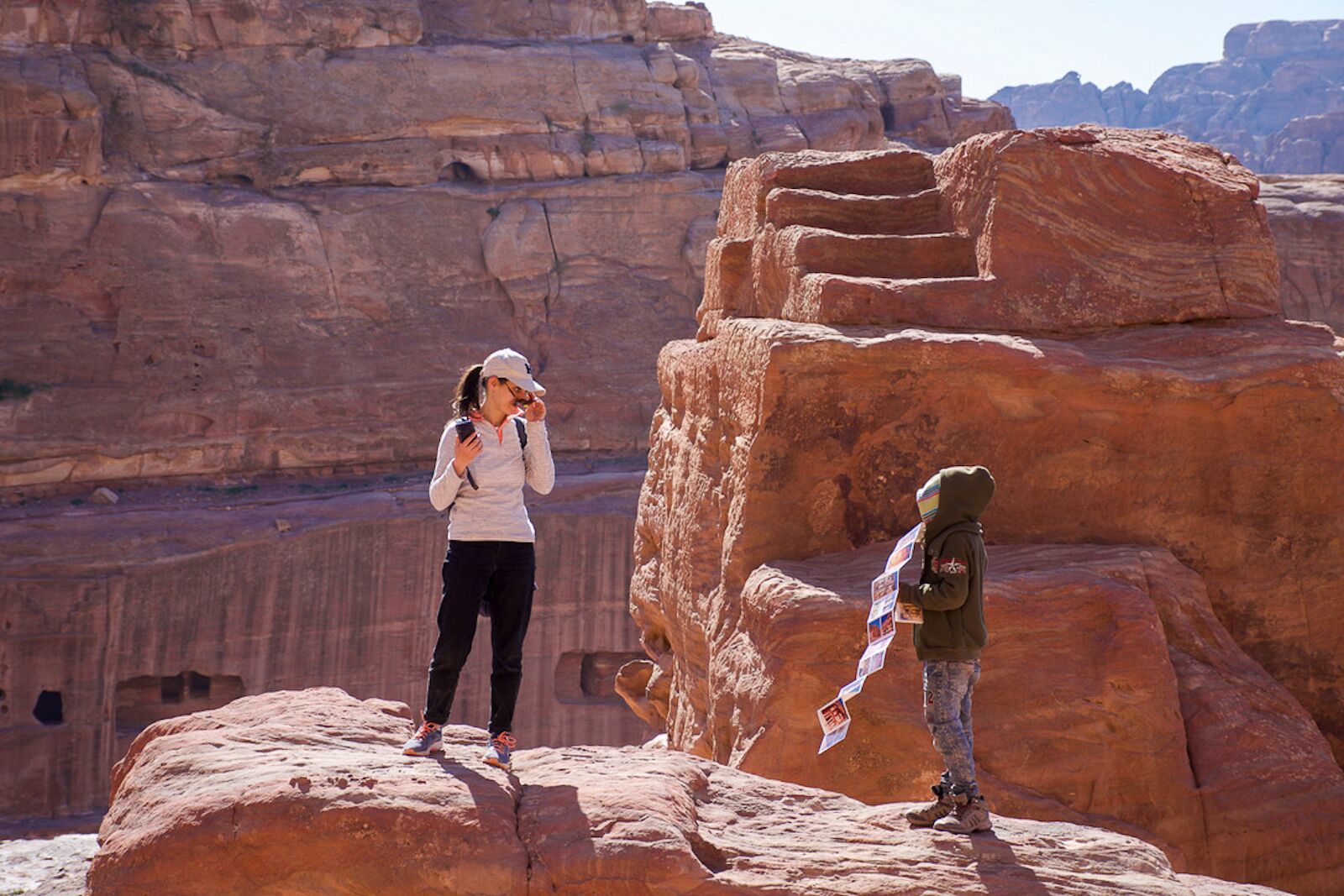 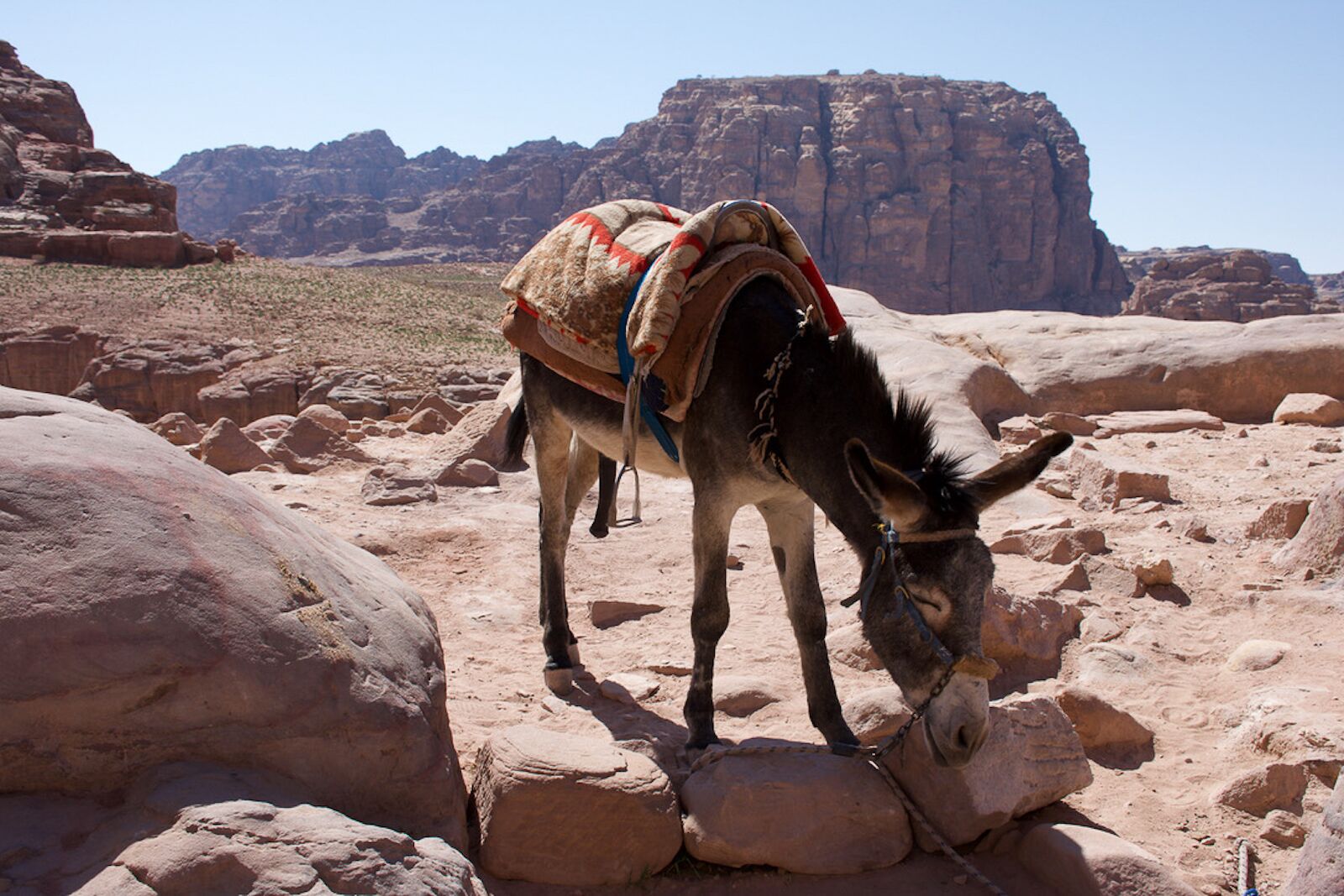 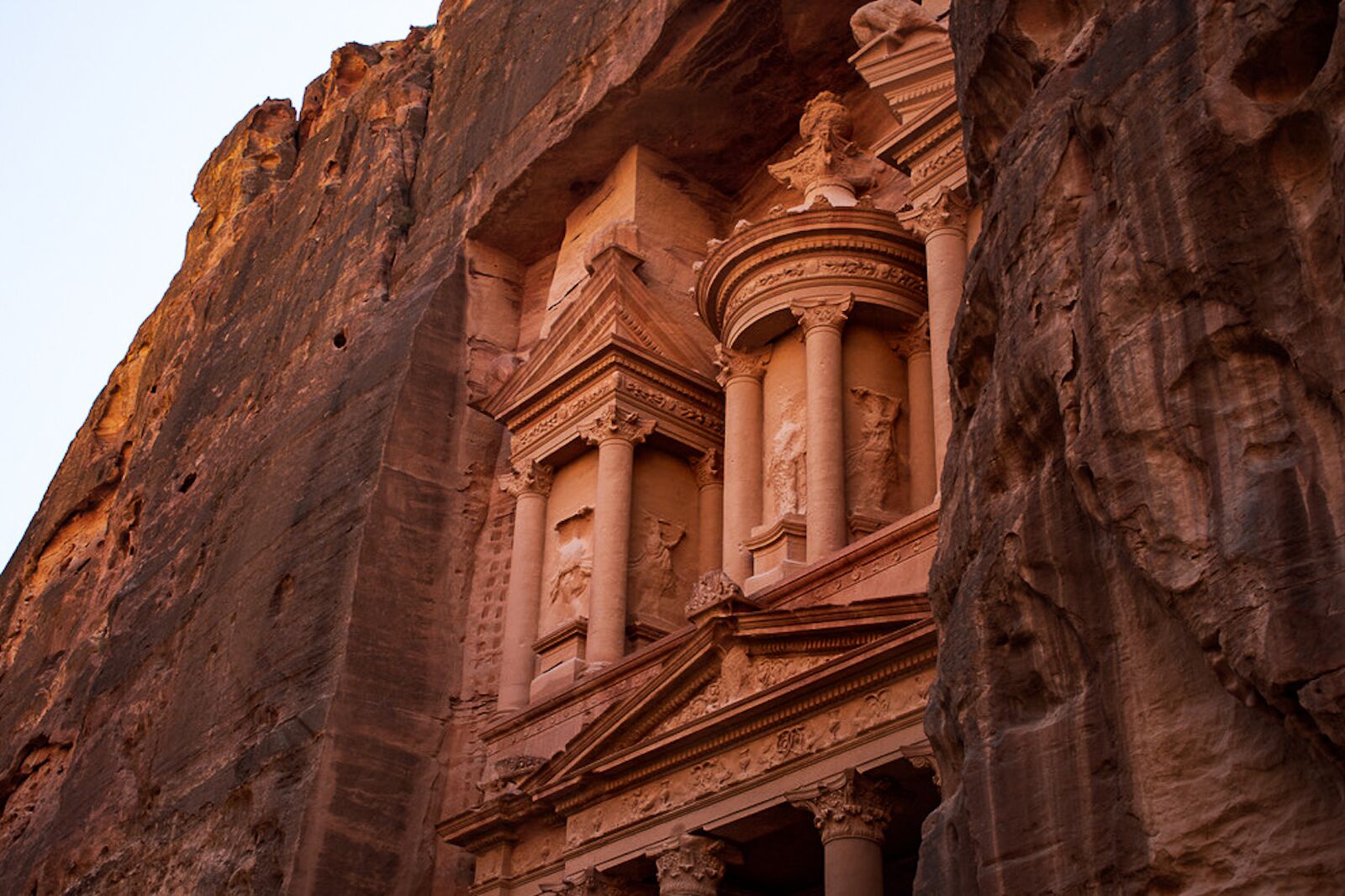 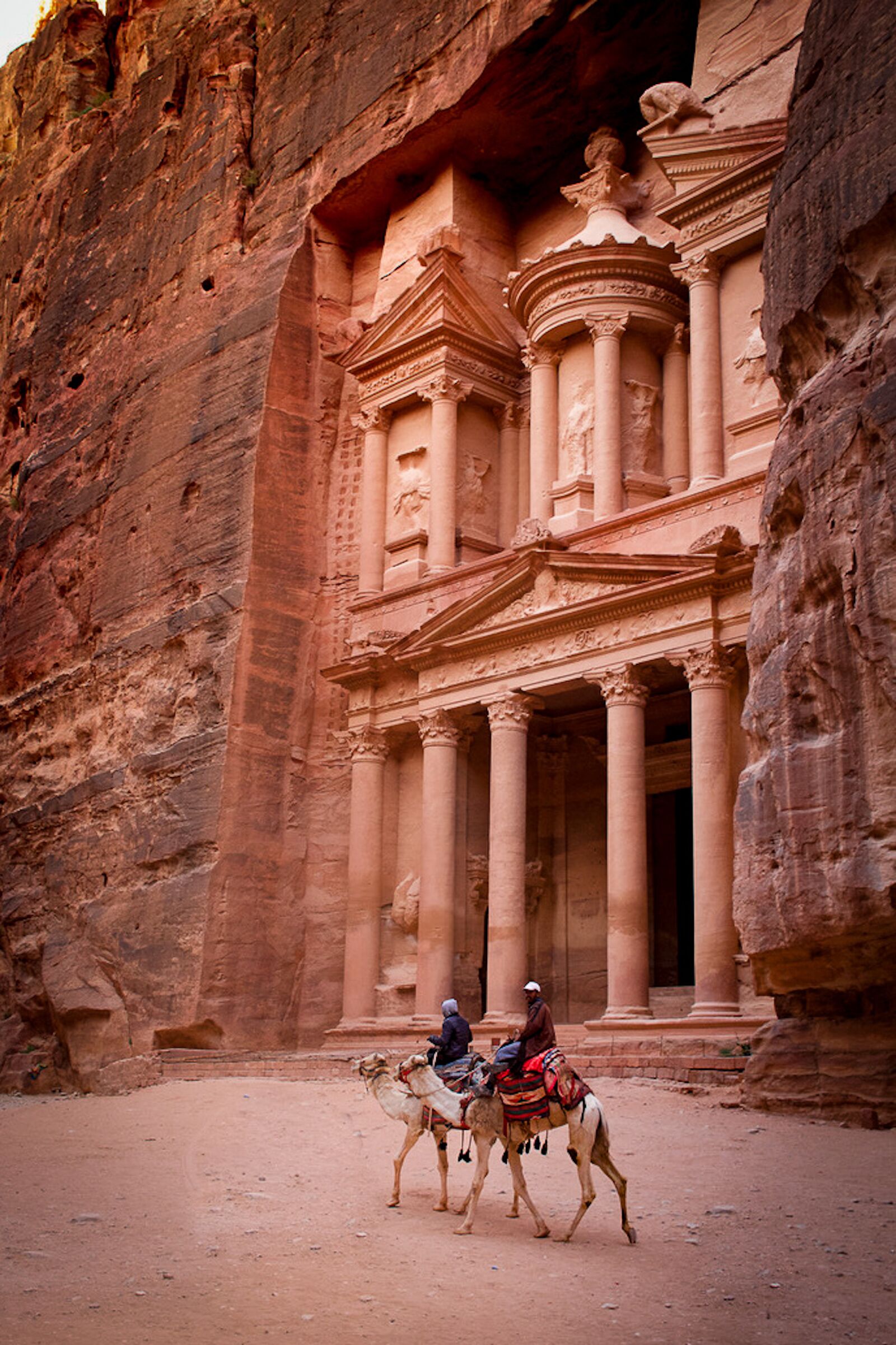 The not-so-obvious benefits of staying in the cave home instead of in the nearby town of Wadi Musa are three-fold.

1. You get to experience the rich Bedouin culture.

Almost everyone who visits Jordan develops a fascination with the Bedouins. Often acting like Arabian cowboys, these Captain Jack Sparrow look-a-likes are everywhere. Spending the night in the cave opens the door for you to get to know them. My two-night stay consisted of shared breakfast halva and Zaatar bread overlooking the red swirls of sandstone in the canyon below, stargazing while my hosts smoked endless shisha and played the Rababa (a local instrument), and candid talks about the Bedouin way of life.

2. You support the indigenous peoples of Jordan.

Most people who visit Petra see the Bedouins as simple entrepreneurs, infiltrating the park boundaries and selling trinkets for easy money. Considering you’re most likely to find them at the base of the Treasury enticing Instagram tourists to pay their 20 JD ($26) fee for a red carpet photo shoot overlooking the monument— you’d be forgiven for thinking that. But knowing their history with the park and their limited means of employment, or education for that matter, you’ll come to see them a little differently.

3. You get the inside scoop on where the off-the-beaten-path sights are hiding.

Not a single human on planet earth knows the Lost City of Petra better than the Bedouins. And they are all more than willing to share their secret hideouts with you. Bedouins are known for their hospitality, after all. All my best recommendations for sunset views and hikes within the park came from Feras and his friends, not the guidebooks. They guided me to several lookout points not indicated on any official park map, where I found small tea houses tucked into the rock ledges overlooking incredible vistas. I sipped gallons of sweet mint tea and watched the sun sink behind the layers of mountains stretching as far as the eye could see.

Despite the seemingly wide-open expanses of desert, Petra is still somewhere it is easy to get lost. Predominately because everything starts to look the same when traversing rock faces rather than well-trodden trails. It never hurts to have the guidance of someone who knows the area well.

Sleeping inside the Lost City of Petra in a traditional Bedouin dwelling is one of those unforgettable travel experiences you’ll be talking about for years to come. This is hands down the most incredible experience to have in Jordan. A combination of indigenous culture, traditional cuisine, incredible historical architecture, and genuine hospitality that you simply won’t find anywhere else in the world.

Archaeology9 Pro Tips for Visiting Petra Without Looking Like a Total Tourist
Tagged
Epic Stays
What did you think of this story?
Meh
Good
Awesome

Breakdown: How Ancient Sites Are Falling To Pieces