The hallmark of a “true New Englandah,” next to undying hatred of the Yankees and an inexplicable fondness for Dunkin’ Donuts, is a genuine love for the winter. Yes, this oft-maligned season is long and harsh in New England, but the dark, chilly months bring their distinctive delights: mugs of hot cocoa in swirling snow flurries, games of pond hockey, ski weekends, and long evenings by the fireplace. There’s no better place to experience these cold weather wonders than Providence in winter.

Providence, Rhode Island, one of the Northeast’s quirkiest and most historic cities, is especially captivating during this season. 45 minutes by car from Boston and 2 hours by train from New York City, the Creative Capital is at its prettiest when snow dusts colonial streets and winter sunsets paint the sky red and gold. Block Island and Newport, coveted vacation retreats near Providence, buzz with crowds most of the year, but the pace relaxes during the winter.

The chilly season also brings delicious food and libations: the tastiest oysters, craft cocktails infused with maple syrup, and hearty stouts from renowned breweries like Narragansett all add to the charm of Providence in winter. As New Englanders will remind you, with the proper clothing, there’s no such thing as weather too cold. So, arm yourself with a thick jacket and a pair of gloves, and maybe a cappuccino and cannoli from Federal Hill, and come enjoy Providence’s wintry charms.

Things to do in Providence in winter 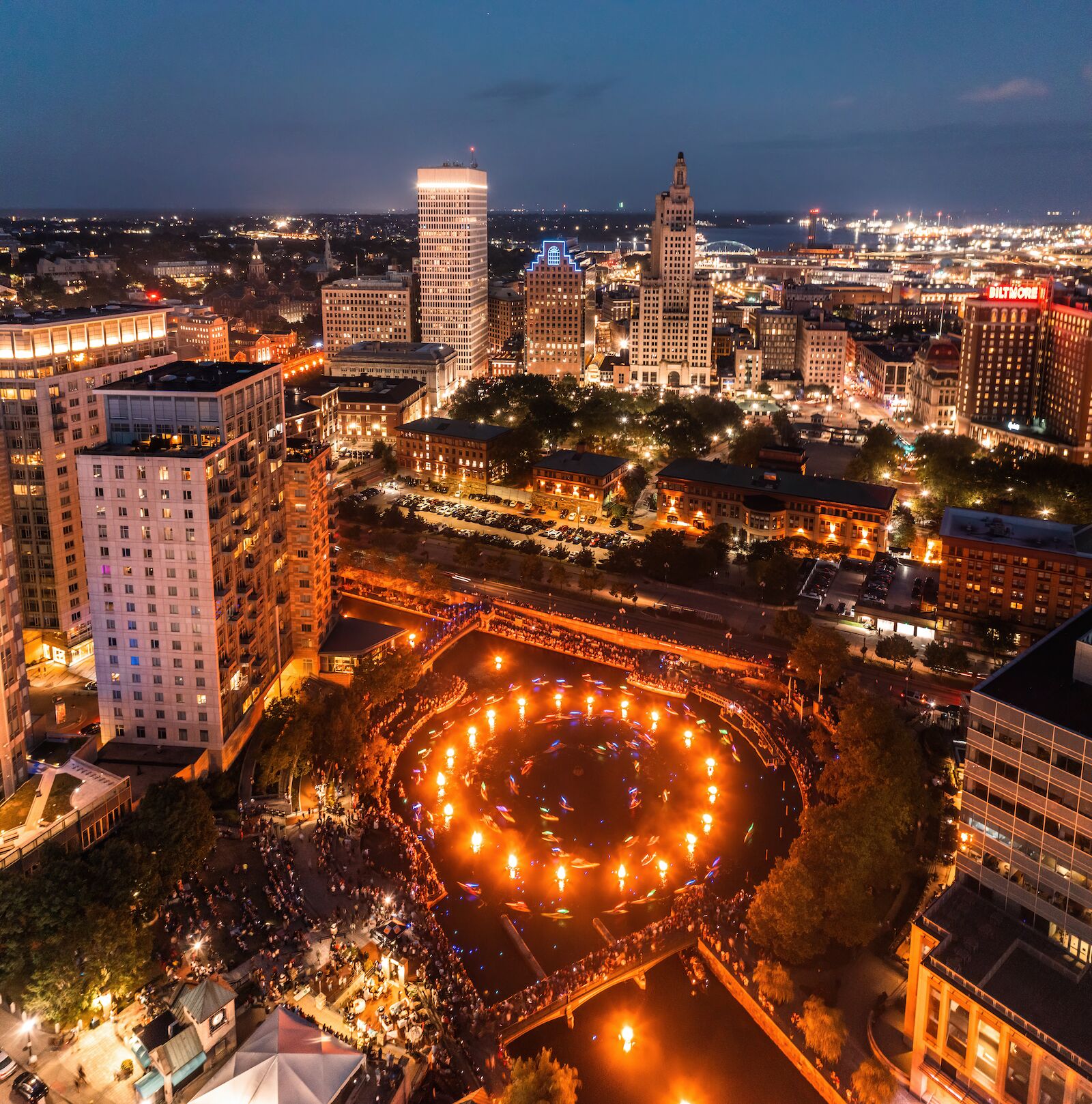 WaterFire, the nocturnal illumination of Providence’s rivers with floating braziers, is one of the city’s most beloved traditions. With fragrant firewood, hundreds of flickering flames, and flamenco music, WaterFire is a sensory feast. Providence has a rich Italian heritage, and when WaterFire launched in the 1990s, the city of Venice gifted Rhode Island’s capital a fleet of handmade gondolas.

The WaterFire gondola rides, 45-minute cruises through the fiery river and past Providence’s historic landmarks, make for an unforgettable evening. WaterFire will take place every night from Dec. 1-3 in Three Nights of Lights. During the series, the city will also illuminate street murals and host performances by an international ice-dancing company. In addition to Three Nights of Lights, Providence will hold special WaterFires for the December holidays and New Year’s Eve.

Watch a figure skating troupe perform, and then go out on the ice yourself

On Dec. 1, the Providence Rink (otherwise known as the Bank Newport Center and the hub of much activity in Providence in winter) will host Le Patin Libre, a world-famous figure-skating troupe from Montreal. The group’s name means “Free Skate” in French, and in addition to performing stunning feats of athleticism, the elite skaters transform ice skating into storytelling, staging plays on the ice. Following the final performance on Dec. 1, Le Patin Libre will host an hour-long, ice-skating dance party, open to all. For further winter shenanigans at the Providence Rink, come back for ice bumper cars, available all winter. The activity is a favorite for families with kids, but even for adults, careening across the ice and smacking into your friends makes for good times. 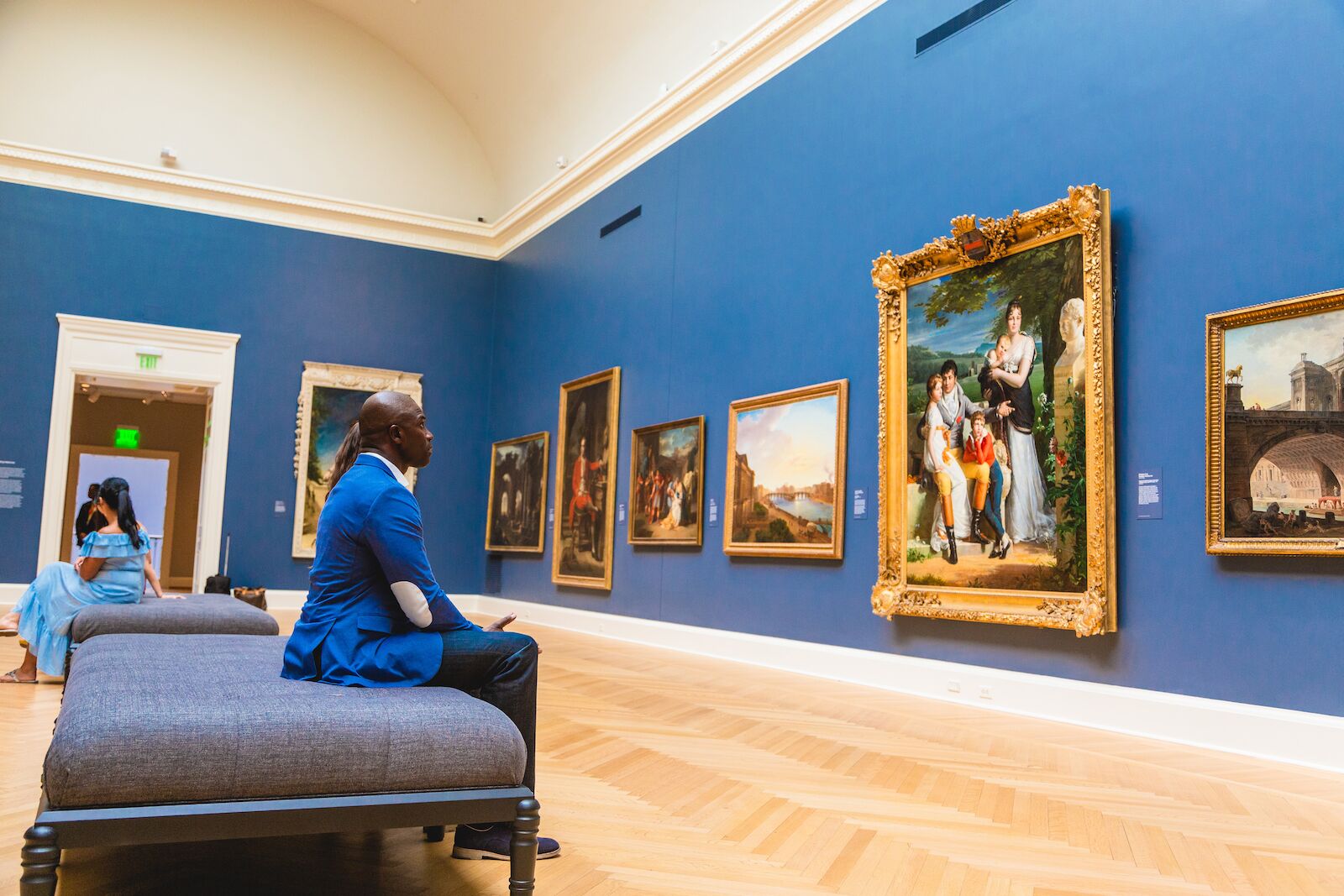 The Rhode Island School of Design, or RISD, is one of the world’s premier design academies, and is home to a remarkable museum. The RISD Museum, which encompasses multiple stories in two connected buildings, takes at least 2 hours to explore. The exhibits are eclectic, showcasing student art as well as masterpieces from ancient Greece, China, Renaissance Europe, and beyond. If you need a pick-me-up to sharpen your aesthetic appreciation, Cafe Pearl, at the museum’s entrance, is an excellent, student-run cafe.

Fun fact: the creators of Family Guy met at RISD, and the museum gift store is the go-to place for Peter Griffin merch. After visiting RISD, take a walk over to nearby Brown University. College Street, near the central campus, is choc-full of funky cafes, bustling restaurants, and collegiate bars. 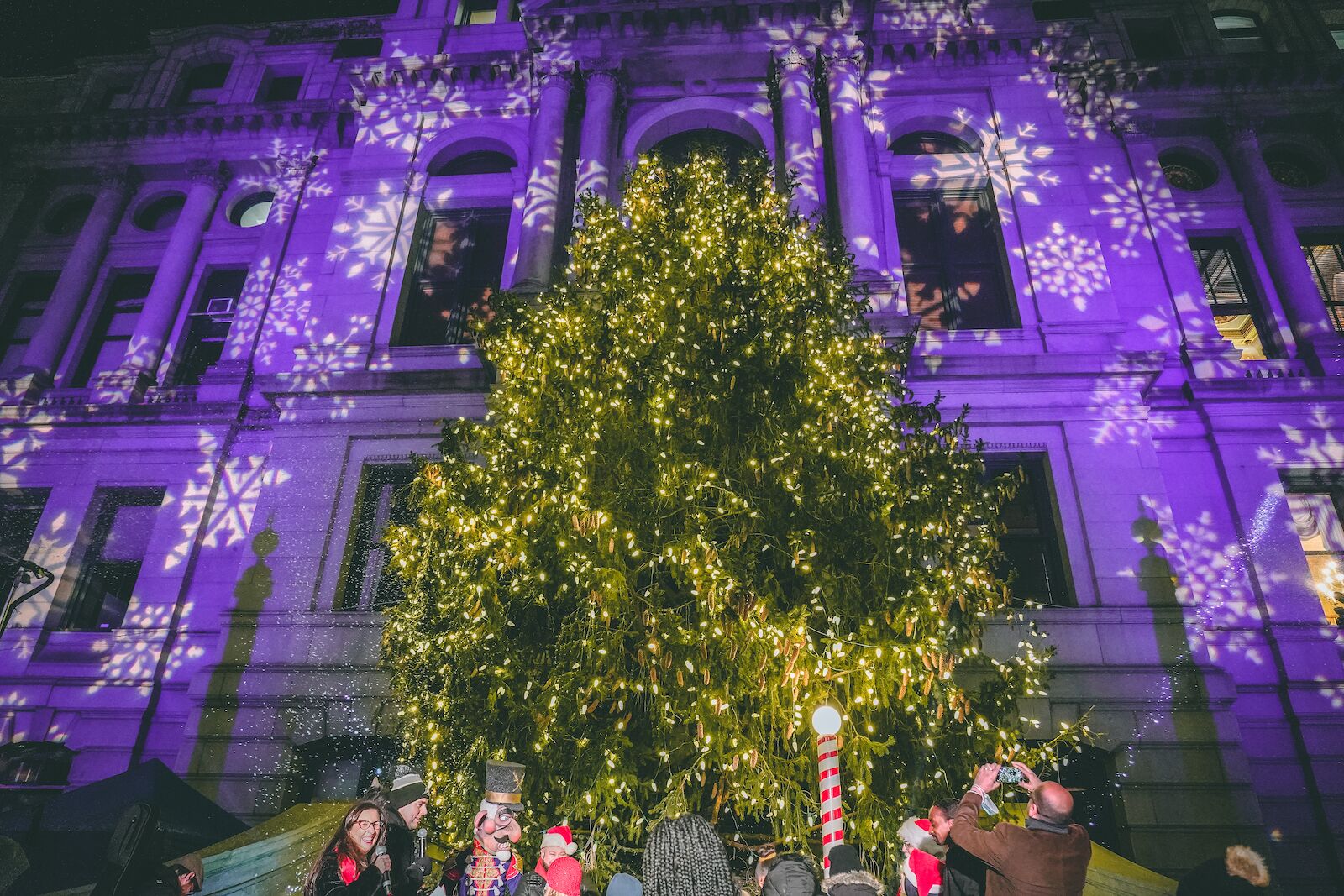 Every December, the Providence Rink holds a beautiful tree-lighting ceremony. A surefire way to arouse festive spirits, the Christmas tree illumination takes place against a winter-themed laser light show. This year’s show, scheduled for December 2, will also host an ice-skating show by a team of former Olympians.

If you’re craving even more holiday extravaganza, check out the Holiday Lights Spectacular at Roger Williams Zoo. During the event, which runs from late November until early January, 3.5 million Christmas lights and a small army of glittering reindeer, snowmen, and Santas, decorate a nocturnal walking path through the zoo.

Where to eat and drink in Providence 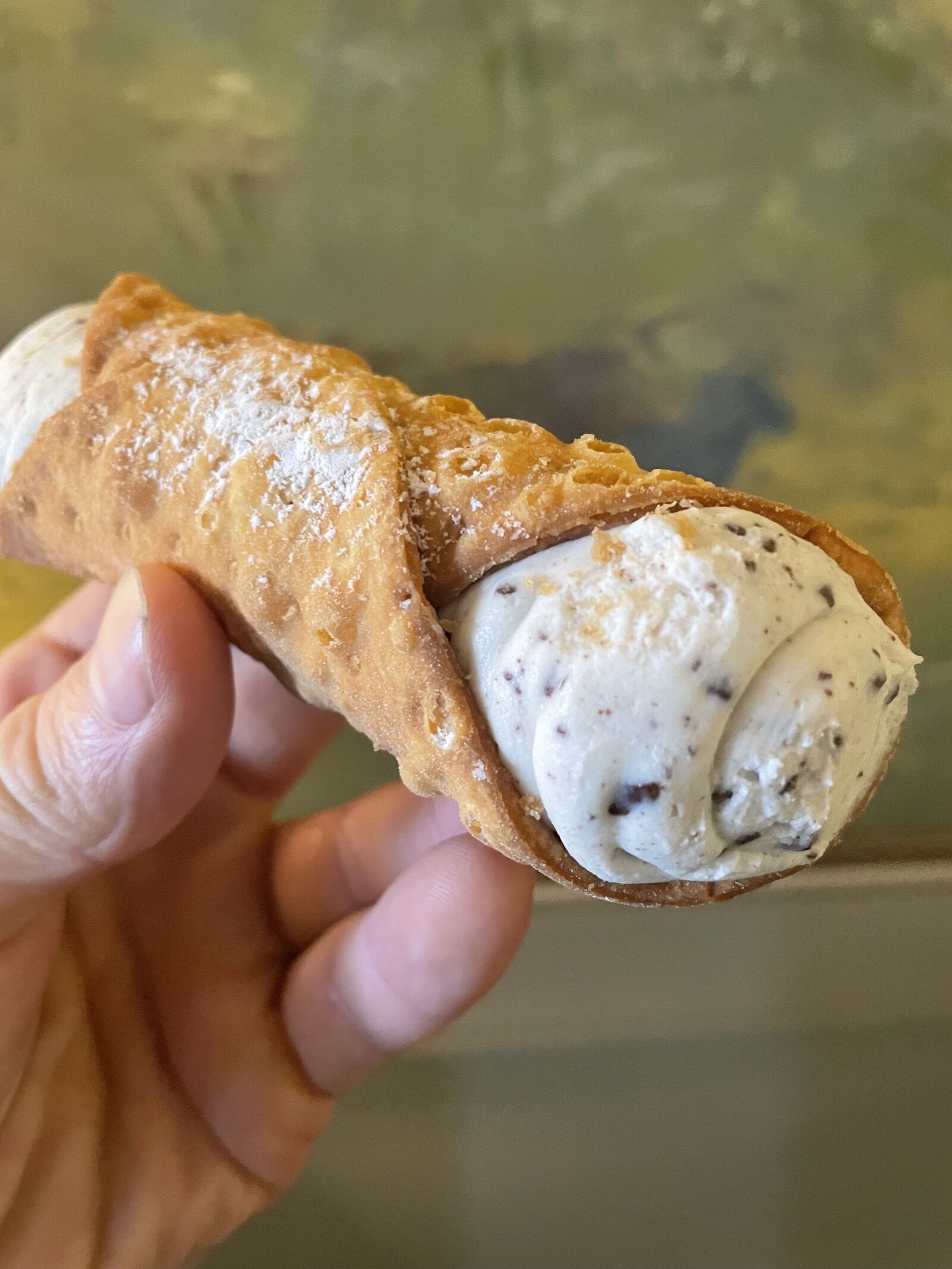 Federal Hill isn’t a restaurant – it’s a neighborhood. It might be the most authentic Italian enclave in the Northeast, perhaps even trumping Boston’s North End and Manhattan’s Little Italy for the quality of restaurants, cafes, and grocers.

The legendary headquarters of the New England mob, Federal Hill still flaunts its Sicilian roots with pride. The neighborhood becomes especially lively around Columbus Day and Catholic holidays like the Feast of St. Joseph. For exquisite cannoli, gelato, or zeppole, head to Pastiche Fine Desserts, a neighborhood standby that also crafts fantastic espresso drinks. For dinner in Federal Hill, Camille’s has been serving lasagna, rigatoni Bolognese, and other Italian American comfort foods since 1914.

Rooftop at the G

Warm up in front of a bonfire with a craft cocktail and blanket on the Rooftop at the G. The menu, small but mighty, highlights Providence’s Italian heritage and abundant fresh seafood. Oysters are particularly succulent during the winter, when the briny bivalves grow plump in preparation for the cold, and the raw bar at the Rooftop at the G serves up all manner of delicious crudo, shucked shellfish, and fruits of the sea. Make sure to cap the meal with the pistachio-ricotta cake, one of the best Italian pastries outside of Federal Hill.

A colonial city of narrow, winding streets, Providence, not surprisingly, has its fair share of speakeasies. The Courtland Club, inside a one-time Italian American social club in a leafy residential neighborhood, serves expertly crafted pre-Prohibition cocktails: old-fashioneds, sidecars, and corpse revivers. The bartenders masterfully incorporate seasonal ingredients, spiking their wintery concoctions with generous doses of maple syrup and walnut bitters. In keeping with the building’s ties to Italy, Courtland Club makes its own limoncello and amaro, or bitter digestifs. 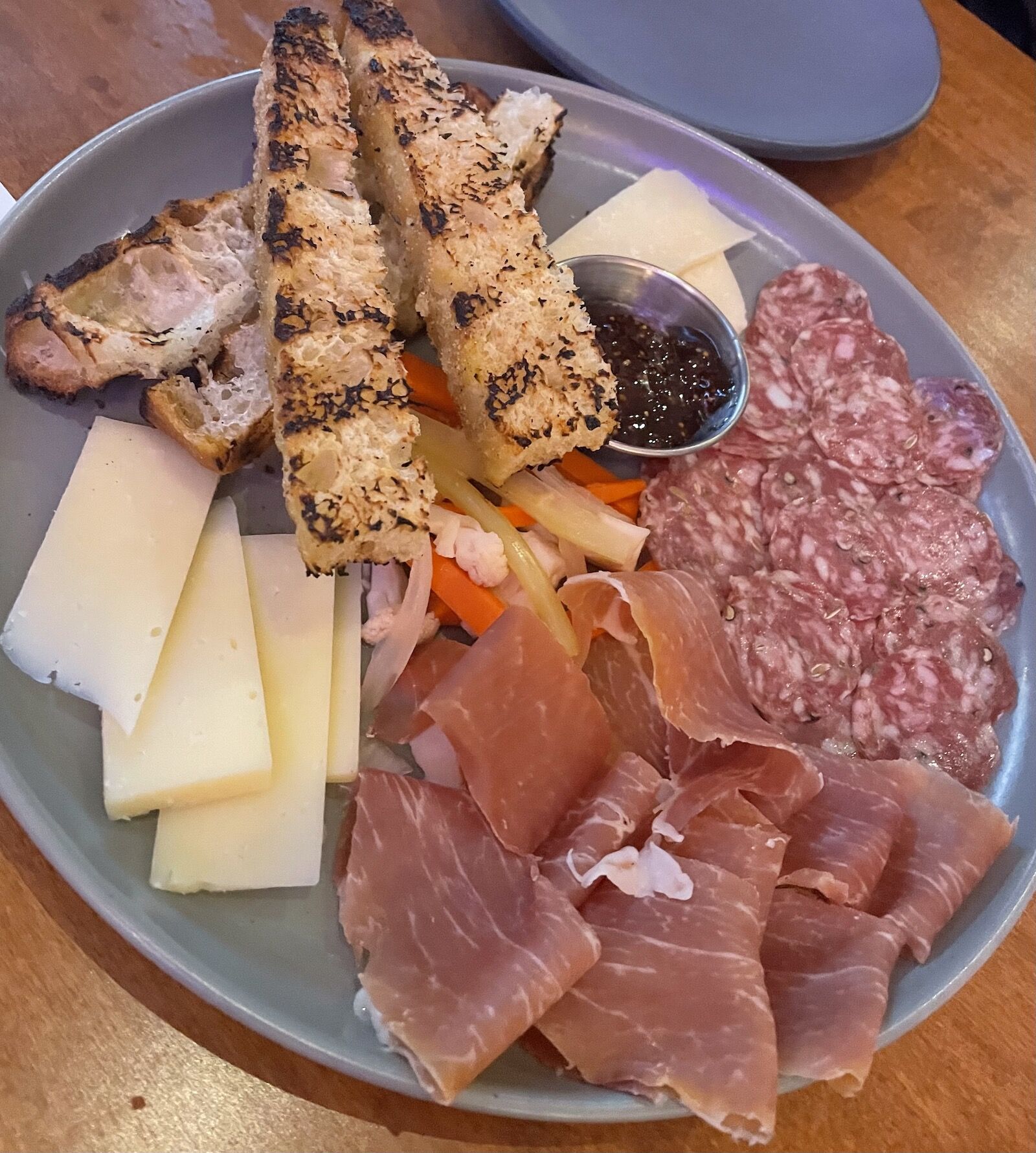 For modern Italian cuisine with an Ocean State twist, check out Sarto in downtown Providence. The charcuterie board, piled high with prosciutto, pickles, and cheeses from around New England, is one of the most sumptuous in town, and the sommeliers are happy to help pair your meal with excellent Italian wines within any price range.

For a favorite Italian American winter dish, try the porchetta, rolled pork tenderloin spiced with rosemary, garlic, and pine nuts — flavors only improved with a good glass of nebbiolo or nero d’Avila. With tile floors and walls decked with mirrors and old wood, Sarto’s ambiance is as alluring as the food. 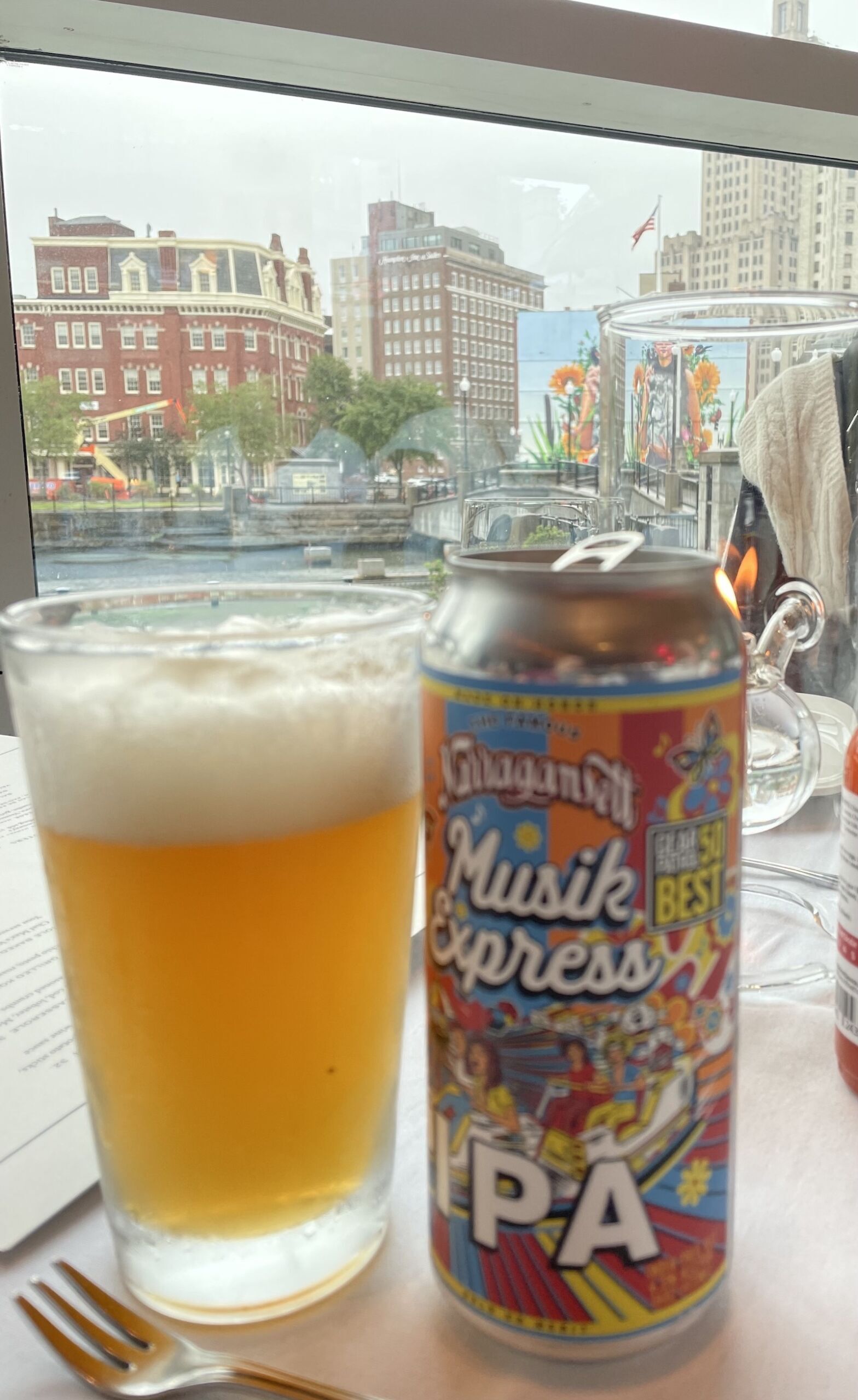 Sam Adams, Harpoon, Allagash, Cisco — New England has no shortage of nationally recognized breweries, but Narragansett, a Rhode Island institution since 1890, is one of the region’s finest. Anyone who went to college in New England waxes nostalgic at the sight of those classic silver and red ‘Gansett cans.

Two of New England’s best winter warmers are Narraganset’s Autocrat Coffee Milk Stout, thick and creamy, and Holiday Ale, spiced with nutmeg, cinnamon, and orange peel. Narragansett’s patio, heated during the chilly months and dog-friendly, is a fantastic place to hang out on a chilly afternoon.

Where to visit just outside of Providence 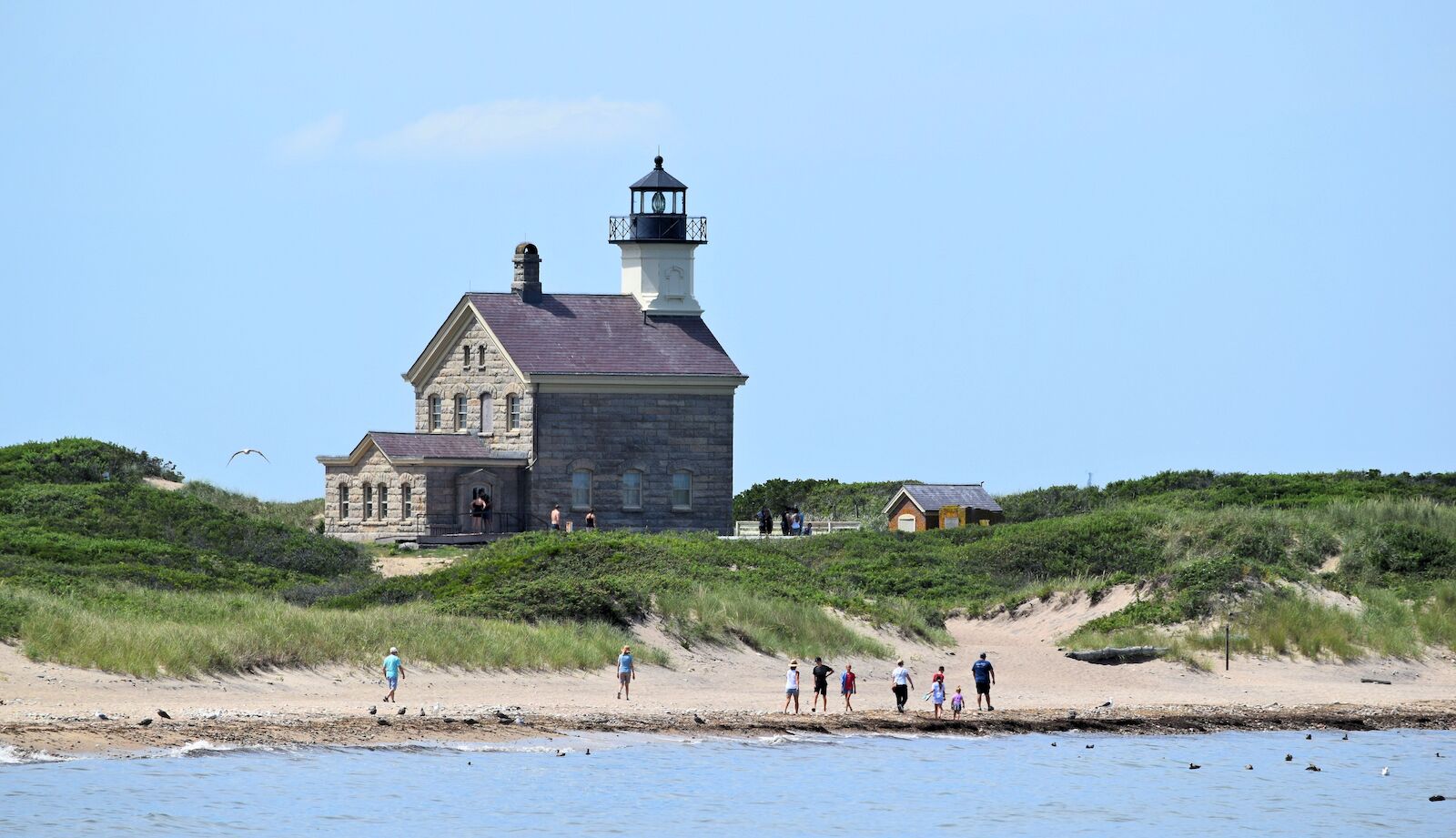 Along with Martha’s Vineyard and Nantucket, Block Island is one of New England’s swankiest beach destinations. The small island gets congested in the summer and even the fall, but you can expect no long lines or traffic during the winter. While sunbathing and dips in the ocean are probably inadvisable this time of year, you can enjoy winter on the Block with ice-fishing and skating. Arriving on Block Island from Providence takes about an hour, with the ferry leaving from the small town of Point Judith. The ferry runs less frequently during the winter, so make sure to check the schedule. 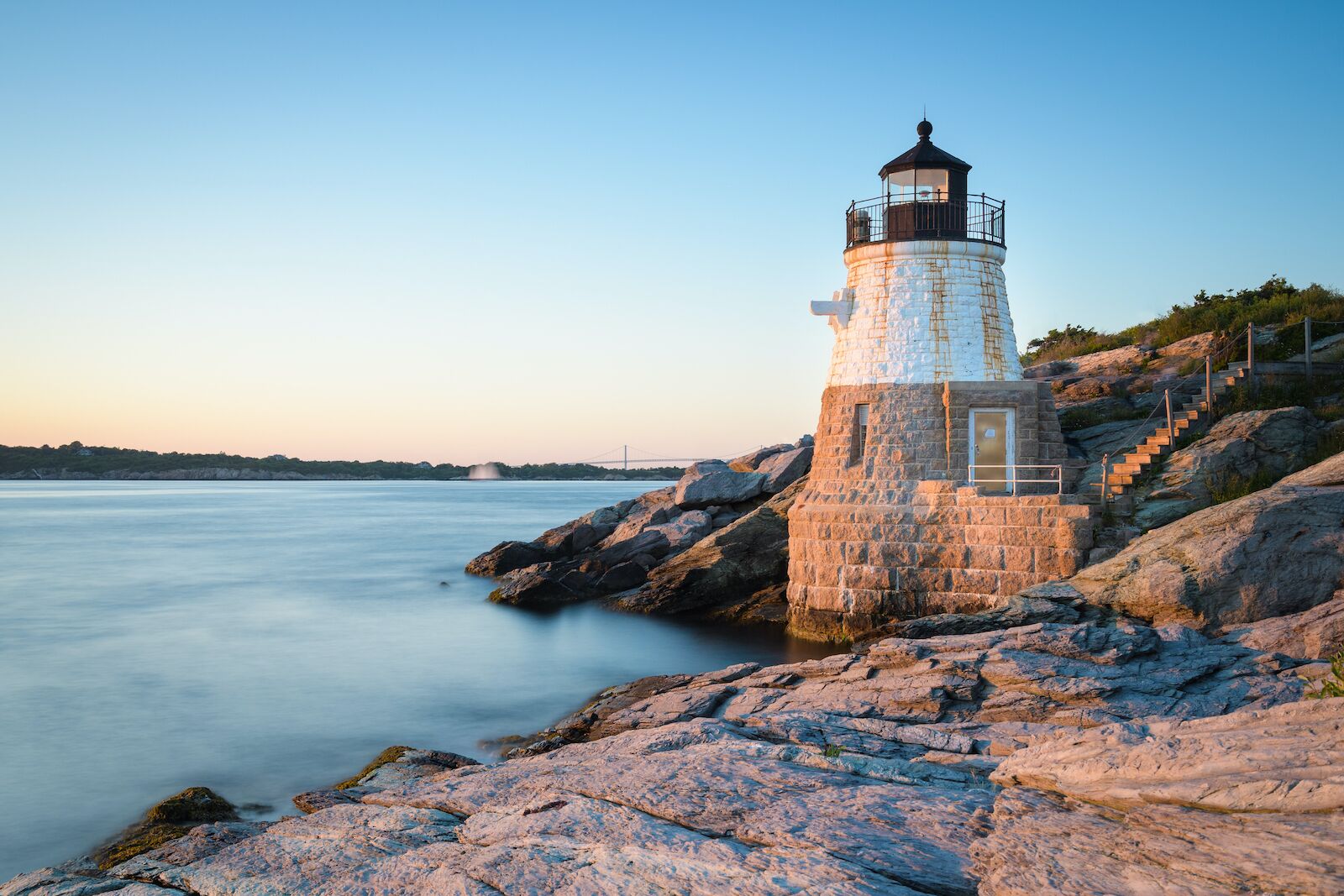 The playground of Gilded-Age robber barons, Newport is home to some of the country’s most impressive mansions. While the likes of Rockefeller and J. P. Morgan may no longer reside in these palatial estates, you can glimpse what their extravagant lives were like on tours of the mansions-turned-museums.

For history and architecture buffs. the mansion tours promise to be a highlight. To warm up with some pub grub and Rhode Island craft beer post-tour, head to the Pour Judgement, a favorite Newport Tavern. Finally, tennis fans should not leave Newport without setting aside at least a few hours to visit the International Tennis Hall of Fame, open year round.

Restaurants + BarsRhode Island Is an Underrated Bastion of New England Seafood. Here’s Where To Try It.
Tagged
Insider Guides
What did you think of this story?
Meh
Good
Awesome