Uruguay is an alluring land, tucked between Brazil’s southern wing and the northern hat of Buenos Aires, Argentina. An itty bitty South American country with an eclectic system of values and landscapes, Uruguay has a flirtatious affair with headlines, popping up in the news with celebrity sightings, LGBTQ support, and the recent legalization of marijuana. Today, there is a new rumor brewing. Whispers on the street hint that the capital city of Montevideo harbors the longest continuous sidewalk in the world. 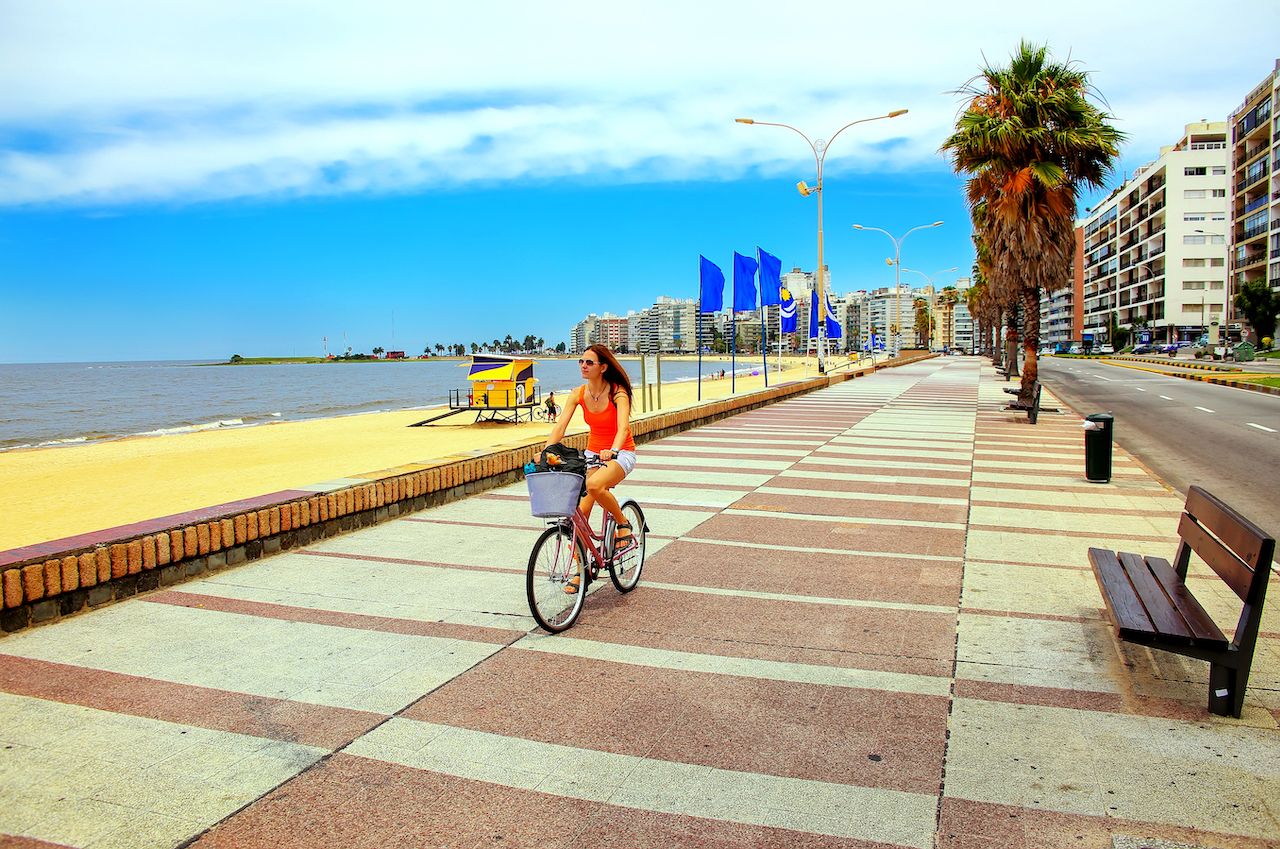 What many would call a boardwalk or waterfront sidewalk is referred to as a rambla in Uruguay. According to the Oxford English Dictionary, rambla is an ancient Spanish word that refers to a dry river bed that’s used as a road, building on the Arabic word ramal, which means “sand.” While in some places, like Barcelona, the rambla doesn’t get too close to the sand — except where it ends near the waterfront — in Uruguay, a rambla runs along the shore. Every coastal city in Uruguay has its own rambla, but Montevideo’s version gives special reason to pause. 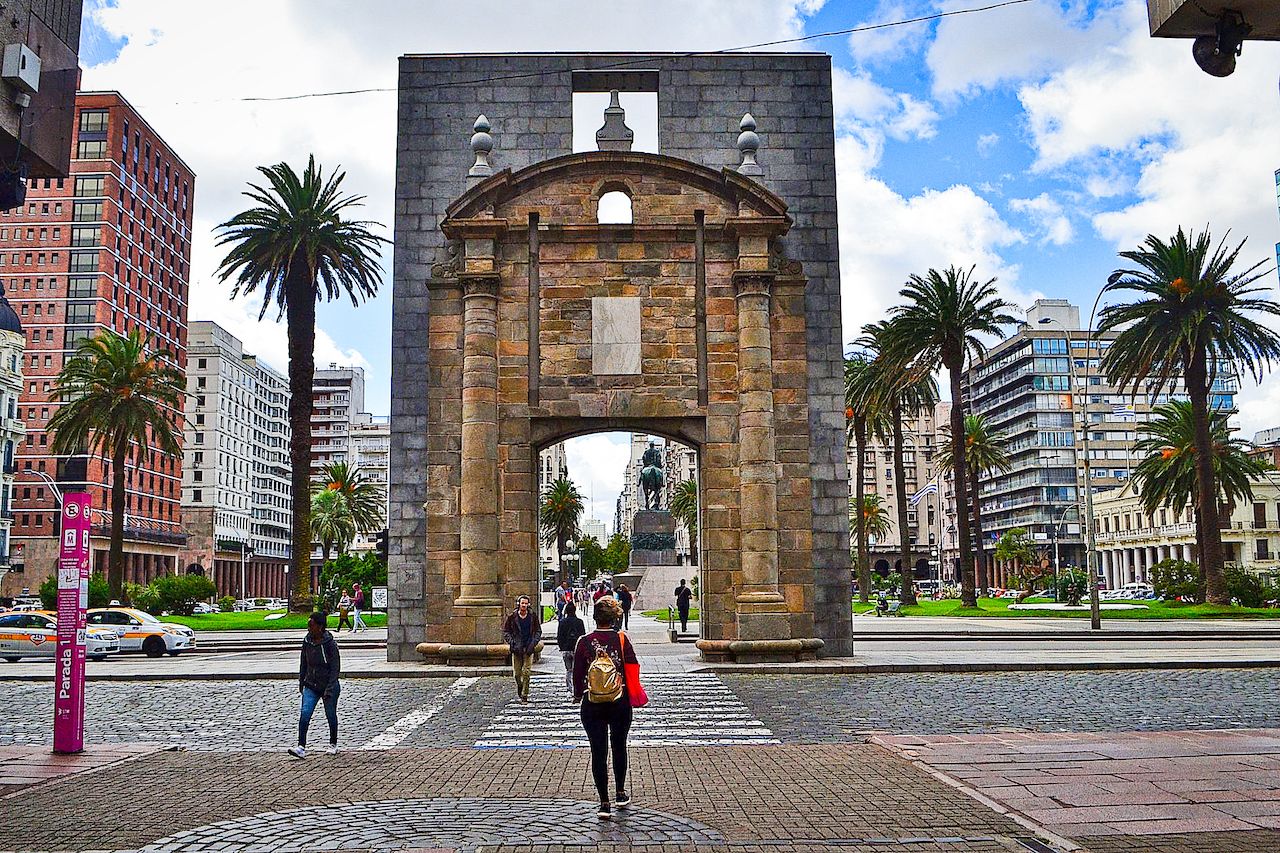 That’s because Montevideo’s Rambla recalls its antique roots, extending to Montevideo’s outstanding historical district. The historic district was once kept under a fortress behind a wall and gateway, known as the Puerta de la Ciudadela. The wall was built in 1741 to hide the city’s fortress, standing for 135 years until it was demolished in the 19th century.

Not only are the 300-year-old historic city and its rambling sidewalk being considered for UNESCO heritage status, but Montevideo’s Rambla is also being reviewed for whether or not it can be listed as the longest continuous sidewalk in the world.

Although the study hasn’t been verified, locals are quite insistent that the research is underway. The concept is quite plausible, considering that the Rambla measures in at 22.2 kilometers or 13.79 miles, which is far longer than other sidewalks that aim to claim the title. It’s nearly thrice the length of Bayshore Boulevard in Florida and seven times longer than the Strøget pedestrian street in Copenhagen. 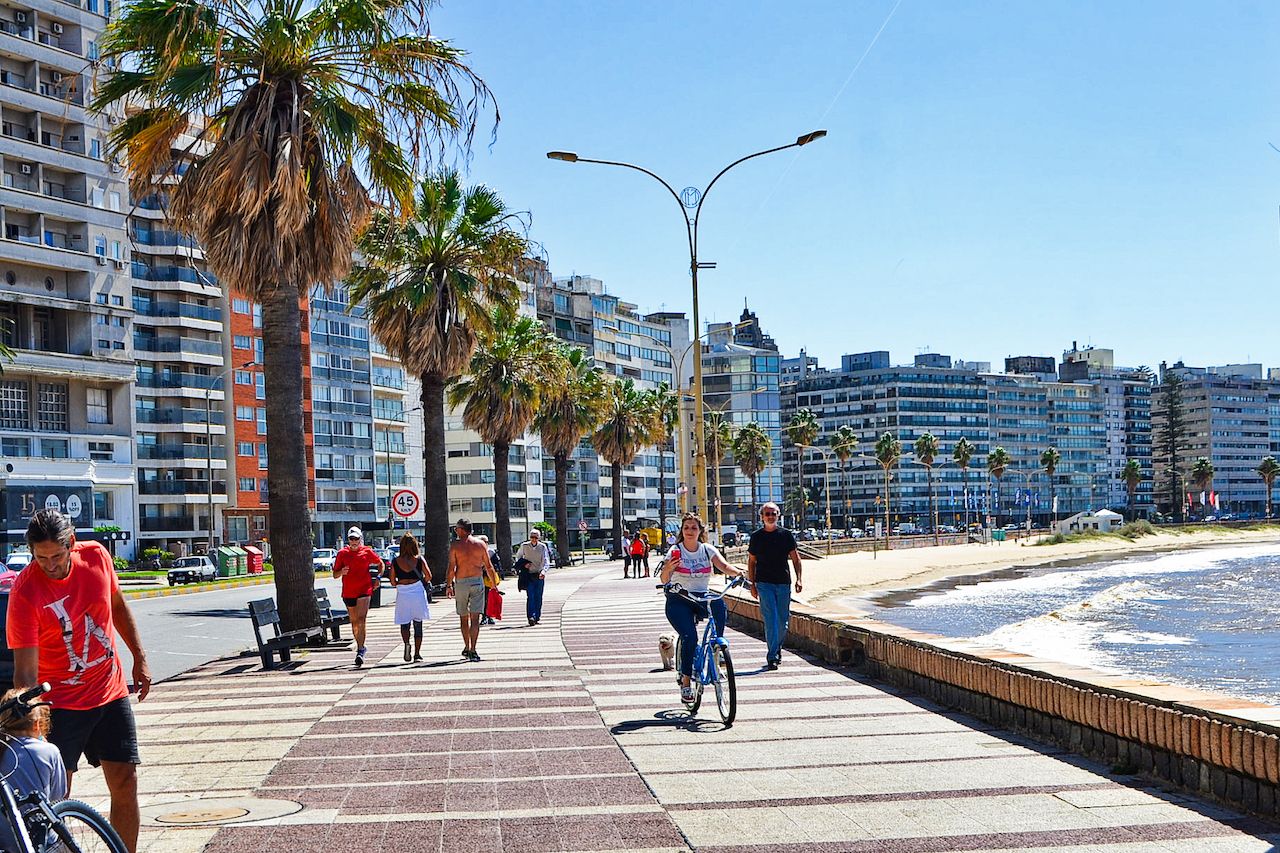 The full expanse of the sidewalk was once called the Rambla Naciones Unidas — or “United Nations Rambla” — and many of the streets that slice through the city to meet the Rambla at the shore are named after the countries of the world. The Rambla is now divided into nine named sections and 23 segments, based on their proximity to neighborhoods, beaches, and other points of interest in Montevideo.

The pathway begins in the west along the Bay of Montevideo, curving along the coastline to meet up with the Ciudad Vieja, Montevideo’s historic old city. Then, it crosses into downtown areas known as Barrio Sur and Barrio Palermo, which rest along the massive, sea-like Rio de la Plata, the 140-mile-wide river that gushes towards the Atlantic Ocean.

The central sections of the Ramblas’ 14-mile expanse snake along Montevideo’s most popular beaches, hugging the residential neighborhoods of Parque Rodó, Punta Carretas, and Pocitos before continuing along the port to the Buceo and Malvín areas. The boardwalk ends in front of the most affluent neighborhoods of the eastside, known as Punta Gorda and Carrasco.

How to explore Montevideo’s Rambla 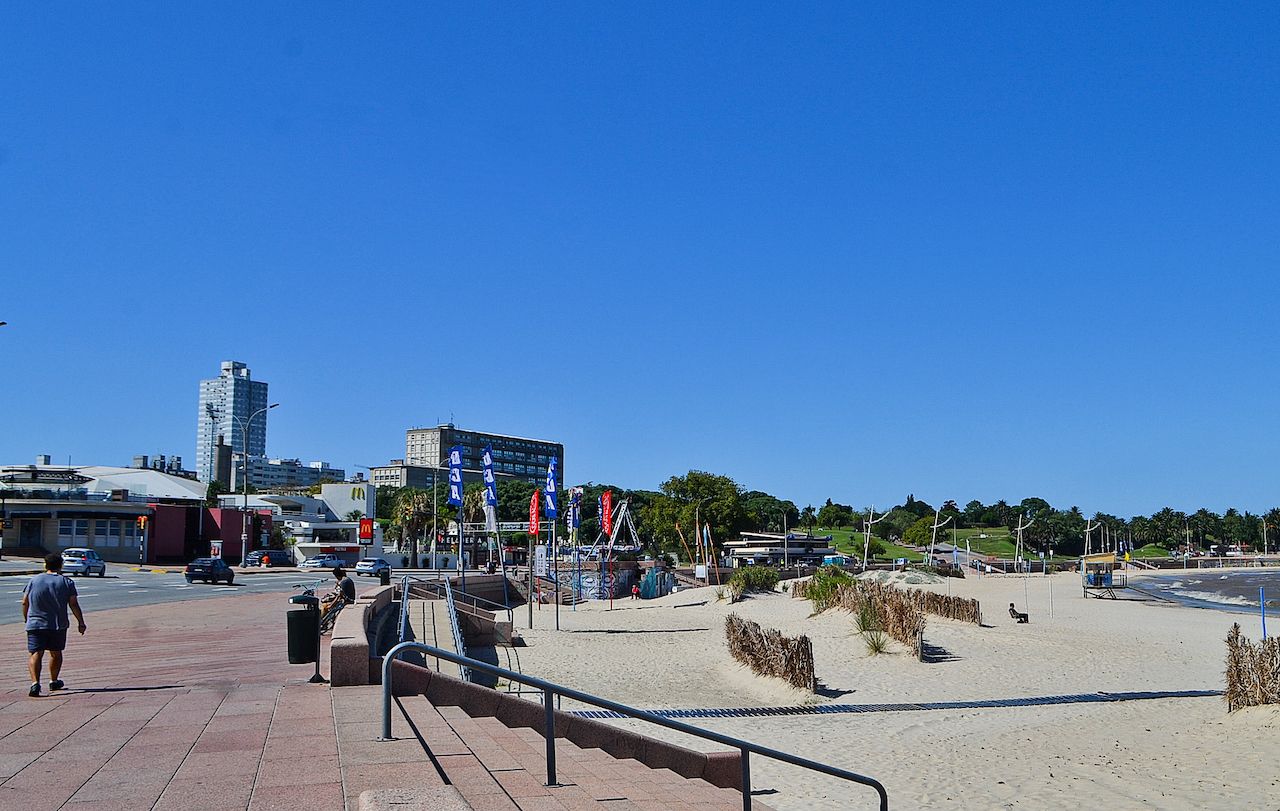 Montevideo is one of South America’s safest cities, making it a great place to walk. The epic convergence of the cityscapes and coastline is something best appreciated on foot; however, 14 miles might be a long way to go in one day.

The Rambla runs alongside Montevideo’s main avenue, but as it’s a sidewalk elevated from the street, it’s exceptionally safe for strollers, bicycles, joggers, and walkers of all ages. Many parts are divided for walking or wheels, so the likelihood of clashing with faster-paced explorers is minimal. The full expanse is very well lit at night and monitored by police in the high season, plus it runs along busy areas like shopping centers, sports fields, skating rinks, workout centers, and more.

Another popular way to enjoy the Rambla is by renting a bicycle for the day. Rent from Orange Bike, which has a shop in the historic center, allowing you to start from the west and see everything all the way east. Orange Bike has a variety of bike options from beach cruisers to three-speed bikes and mountain bikes, plus baby seats and tandem attachments for kids. Bike helmets and locks are included while tour guides are optional. Many hotels in Montevideo are affiliated with Orange Bike, allowing guests to simply bring their bike to the lobby at the end of their ride.

Must-see sights on the longest sidewalk in the world 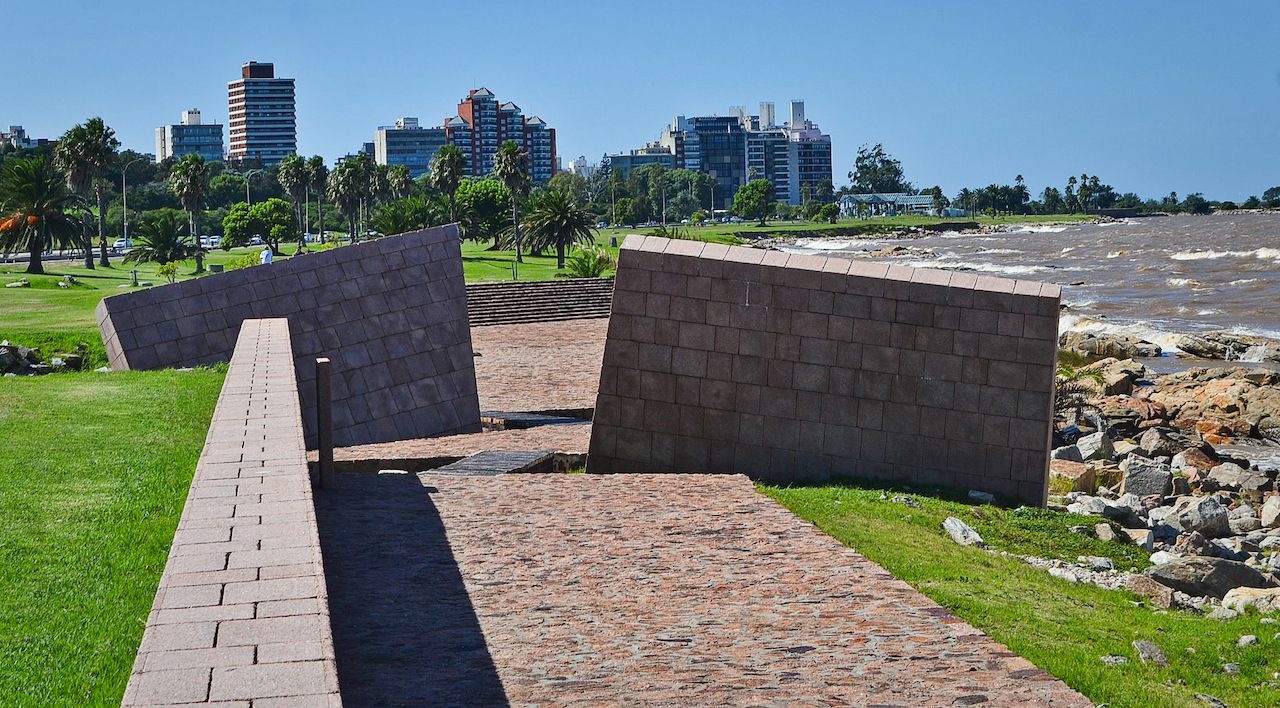 When it comes to things to do in Montevideo, the options are endless. From outstanding beaches to incredible museums, an unforgettable historic center to exemplary shopping malls, there is enough to explore to spend several weeks in the city.

Beyond the obvious, there are a couple of sites along the Rambla worth seeing. Start with the Montevideo sign, found in the Pocitos section, to take classic selfies above the city. Also, don’t miss the Punta Carretas Lighthouse on Punta Brava between Parque Rodó and Punta Carretas Shopping. Finally, keep an eye out for the Holocaust Memorial, the unusual Pittamiglio Castle, and the Maritime Museum of Montevideo — all located along what could very well soon be designated the longest sidewalk in the world.

Working With Street Kids in Uruguay