We hope you love the spaces we recommend! Just so you know, Matador may collect a small commission from the links on this page if you decide to book a stay.

“Where In The World Are You Sleeping Tonight?” This very query, part of an artistic collage, greets travelers checking into the Hostelling International Fisherman’s Wharf in San Francisco. It’s more than just a rhetorical question. It’s a hint of things to come, foreshadowing that these accommodations are anything but ordinary.

The HI Fisherman’s Wharf is situated on the grounds of Fort Mason, a Civil War-era coastal defense site. It’s part of a prime piece of real estate that has retained military ties to the present day, though the National Parks Service assumed stewardship of most of the land and buildings in the 1970s. The hostel is set up in a repurposed building — it used to be a World War II-era Port of Embarkation station dispensary. It’s curious to consider that a backpackers’ hangout once served soldiers in need of checkups and prescriptions but I know from my own visit that the transformation was a very successful one. And HI Fisherman’s Wharf is one of several remarkable historical properties converted into hostels. 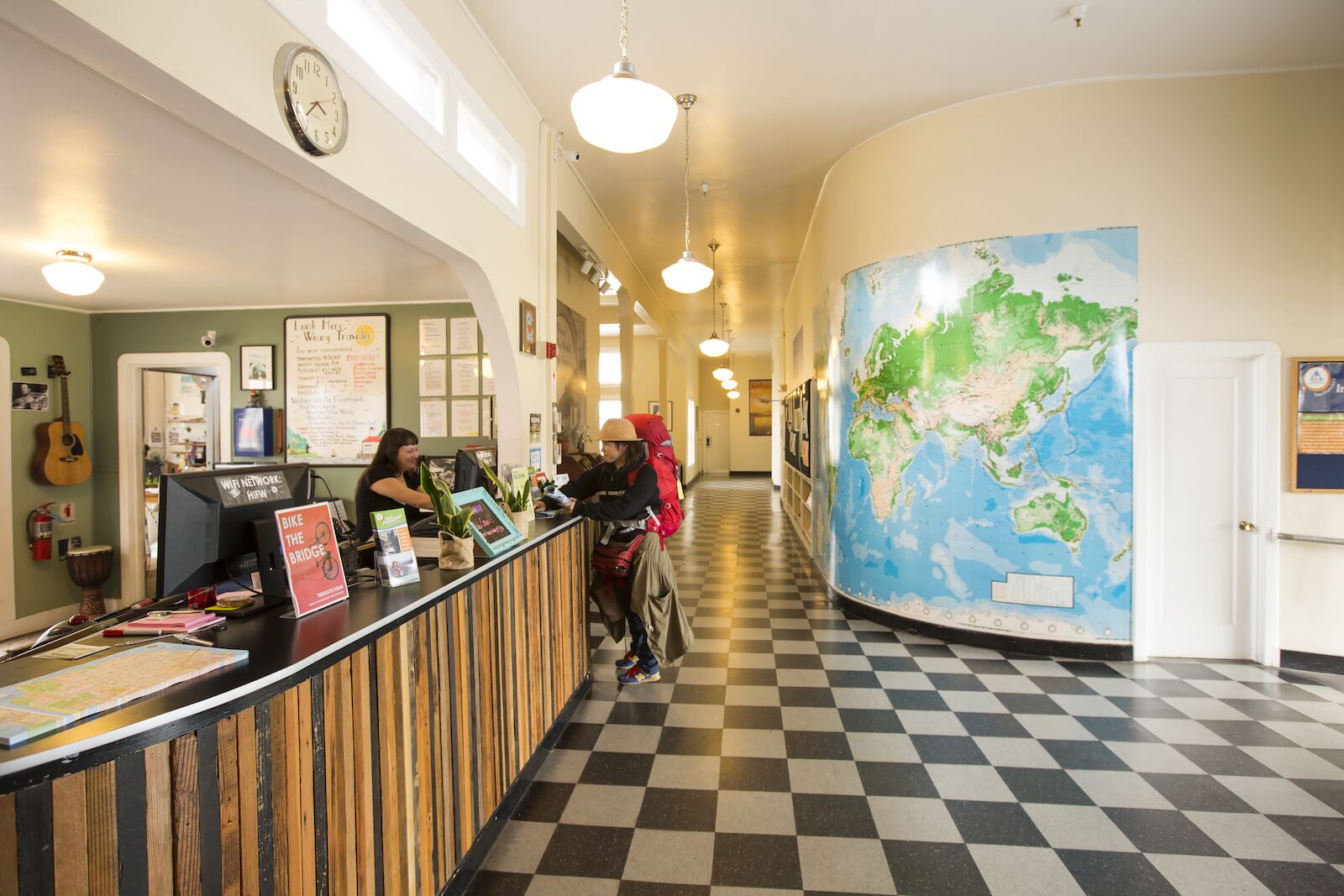 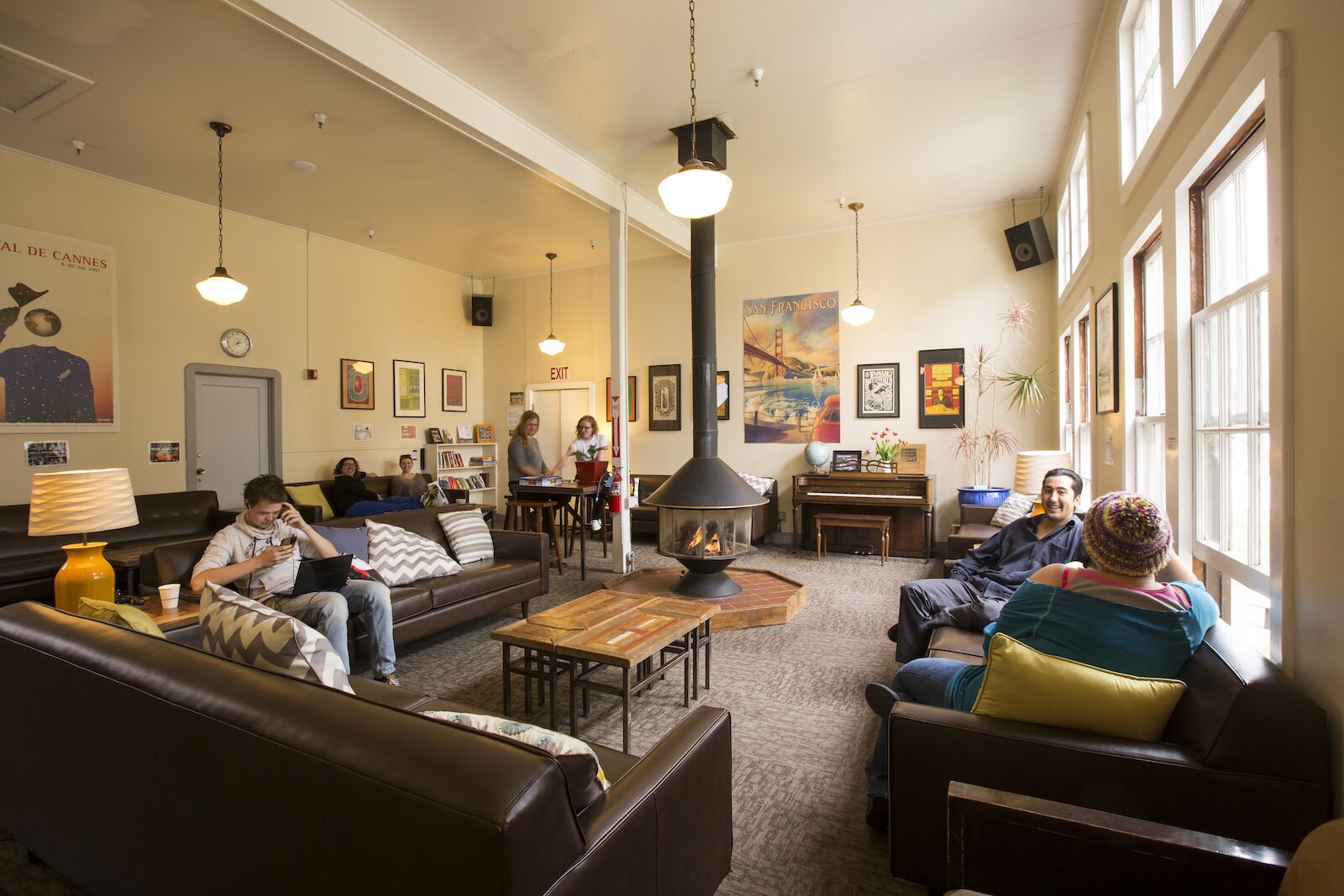 Hostelling International’s status as a not-for-profit organization dedicated to sustainability, multiculturalism, and community makes it especially well suited to repurposing older buildings. As Danny Case, HI USA Vice President of Hostel Operations says: “We have adopted a policy of prioritizing adaptive reuse of buildings because of the rich, local history of each building, and the reduced environmental impact associated with preserving them.”

A Cape Cod hostel that is like no other 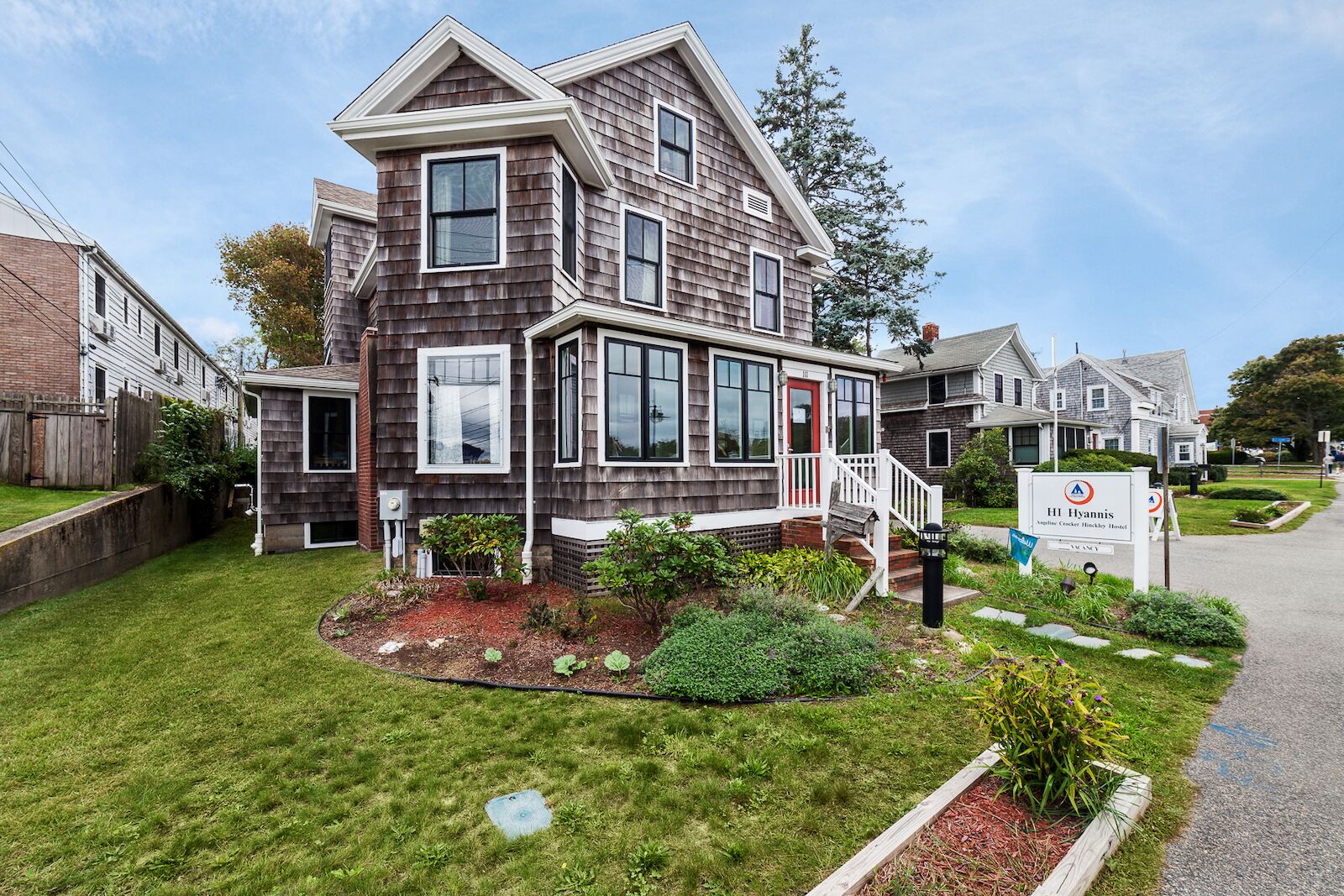 Reinventing historic buildings as modern hostels is a creative solution that pays dividends for both locals and visitors. Take, for instance, the case of HI Hyannis, in Cape Cod, Massachusetts. This pretty harbor-side building is a 1910 era Sears ‘kit house’. Once upon a time, you could order every item you needed to build your own home from the Sears catalog! From 1908 to 1940, an estimated 70,000 kit houses were sold in more than 370 sizes and architectural styles. Before it was a hostel, HI Hyannis was a private home. The owner, Ruth Rusher, was a beloved tour guide, civic activist, and passionate ambassador for Cape Cod tourism. Elizabeth Wurfbain, Executive Director of the Hyannis Main Street Business Improvement District, remembers its transformation into a hostel, saying: “I was at their ribbon cutting and it is a beautiful old Sears ‘kit’ building, right across from the harbor. It is an inexpensive, authentic, and very local oriented experience. Like you are staying with a family.” 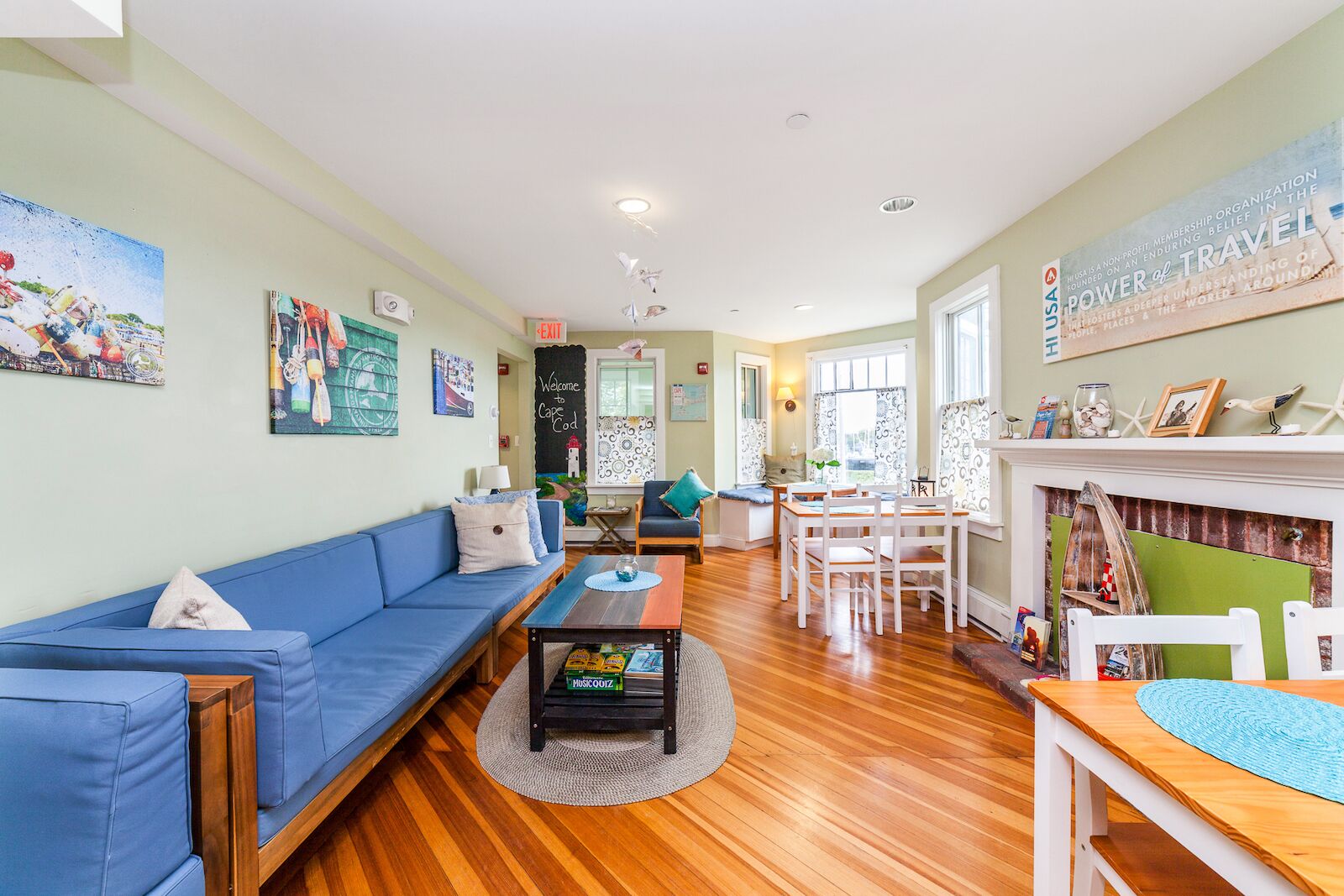 The National Trust for Historic Preservation highlights a number of practical reasons to repurpose buildings like HI Hyannis. They point to factors such as preserving the solid construction techniques used in bygone days, as well as the ability of older buildings to attract people with their warmth, coziness, and unusual histories. The value of preservation is something well understood by the John F. Kennedy Hyannis Museum, located just a short walk from the hostel. “Our First Lady, Jacqueline Kennedy was instrumental in saving and preserving many key buildings and locations in our nation,” says Wendy Northcross, museum director. “Mrs. Kennedy recognized the value of saving the history of a place and the learning that comes from experiencing something ‘in situ.’ ” I can’t help but think that Mrs. Kennedy would approve of the heritage safeguarded in Hyannis’ exceptional hostel.

Another example of repurposed buildings: The Ottawa jail hostel 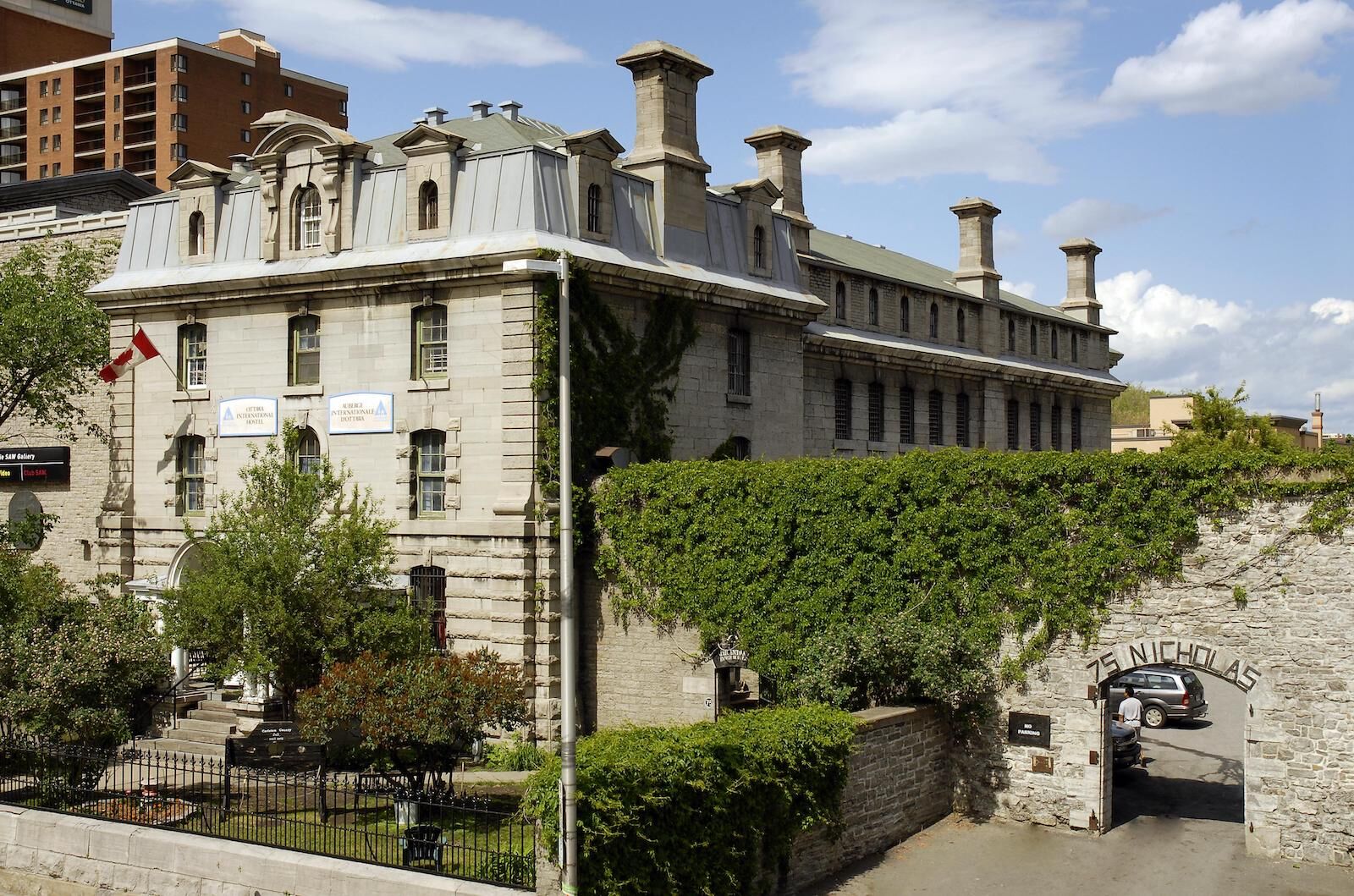 In some cases, a rich local history is much more than a quaint sense of nostalgia. Take, for instance, the story of Saintlo Ottawa Jail (formerly the HI Ottawa). Located in the heart of Canada’s capital city, it has been at the center of political intrigue since the mid-1800s. The building is a former jail and it was here that Patrick Whelan was executed in 1869. Convicted of the assassination of Irish-Canadian politician Thomas D’Arcy McGee, Whelan held fast to his innocence throughout his incarceration. Today, his restless spirit is said to haunt the hostel, a story I heard during a Haunted Walks tour. It’s a thrilling tale, but also a reminder of how much remarkable folklore rests in the walls of older properties. 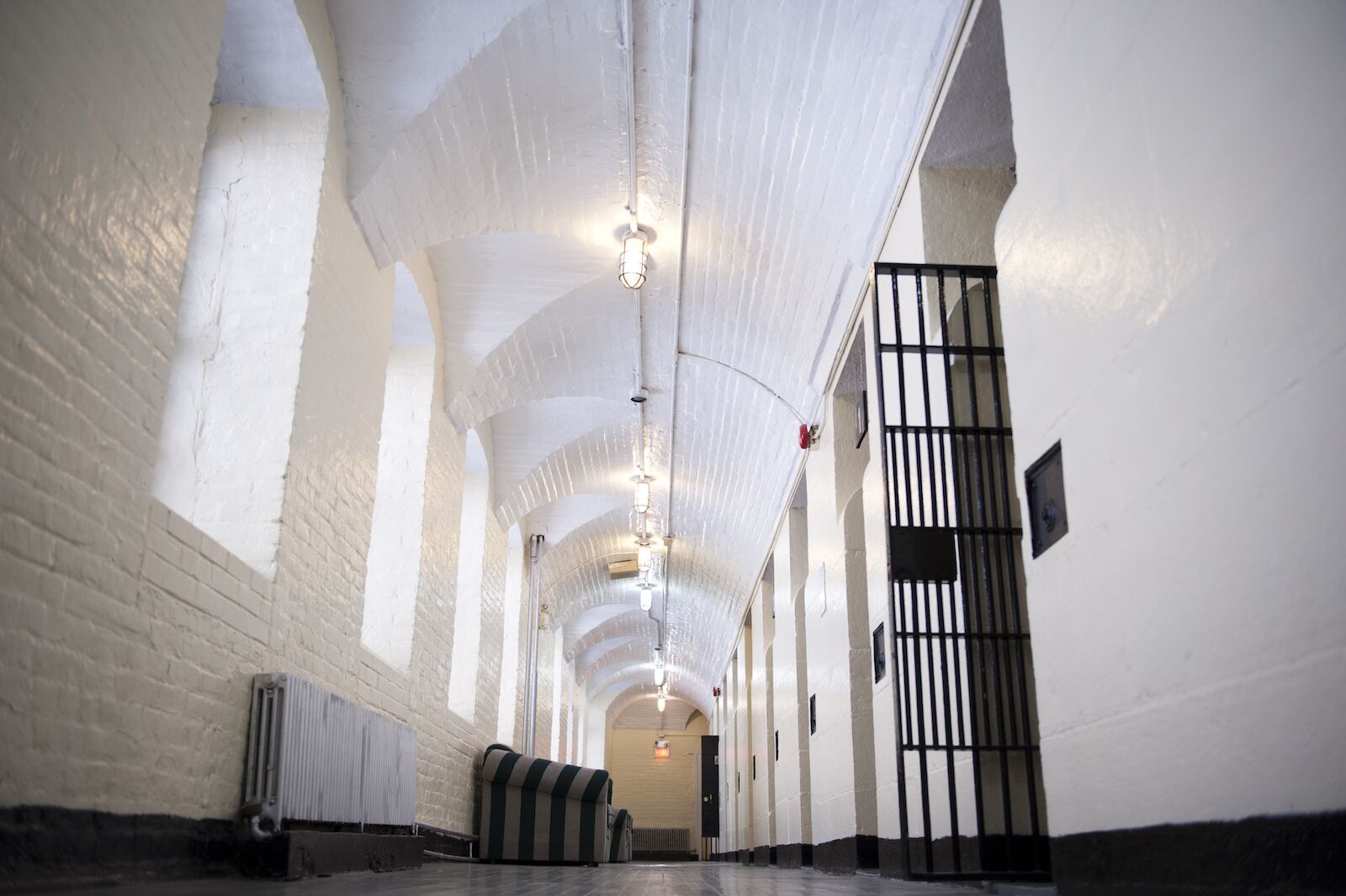 Converting this former jail into a hostel gives these old stories new life. James Powell, director of communications for The Historical Society of Ottawa, says: “Places like the old Ottawa jail provide a bridge between the past and the present. They remind us of where we came from and who we were […] That a building with such a bleak heritage was transformed into a hostel where young travelers can stay while exploring both new and old Ottawa is a symbol of a more positive future.”

Activist and urban planner Jane Jacobs said in The Death and Life of Great American Cities: “Old ideas can sometimes use new buildings. New ideas must use old buildings.” The HI Fisherman’s Wharf, HI Hyannis, and Saintlo Ottawa Jail are but three examples of the dozens of North American hostels which are breathing new life and purpose into older, unused, and under-appreciated buildings. Together, they prove that history and hostels make for an irresistible combination — for travelers and locals alike.