The history of the United States reneging on its agreement with the Native peoples — of taking away their rights to ancient land on which they’ve lived for multiple centuries simply for commercial or political gains — is a long and sad tale. Tragically, that tale is not yet over. At every turn, the Trump administration seems to see protected land simply as a wasted business opportunity; or, more cynically, as land to be licensed off in exchange for political support. Across the country, Indigenous peoples are fighting to keep their lands safe from exploitation and development.

One ray of hope is that the head of the Bureau of Land Management, which oversees much of this land, was acting without the authority to do so. A US District judge in Montana ruled last month that Acting Director William Perry Pendley served unlawfully for 424 days, since he was reinstated multiple times in a provisional role, when the BLM director must in fact be approved by Congress. The hope is that decisions made during those 424 illegitimate days can be contested in courts and invalidated. The downside is that management of those lands was turned over to the Secretary of the Interior David Bernhardt, another pro-business Trump appointee.

Below are some of the Native areas that are under threat, followed by some of the Indigenous groups fighting to protect them. As Josh Mogerman at the National Resources Defense Council told Matador via email, “while support for groups like NRDC is deeply appreciated and needed, Indigenous groups are on the front lines of these fights — direct support for their work is essential.”

Beyond supporting native groups like the Indigenous Environmental Network and Honor the Earth — or groups working on specific areas, which we list below — be sure to vote. Voting is critical, since we’ve seen that this administration has attacked native lands more aggressively than any administration in recent years. As the Oak Flat example shows below, Senators and Congresspeople can also shape the fate of these areas, so voting at local and state levels is also key.

Write your elected leaders and let them know how you feel. And do consider supporting groups like the NRDC and Earth Justice that are litigating these often illegal and unconstitutional attacks on Native lands.

Native lands under threat in the US 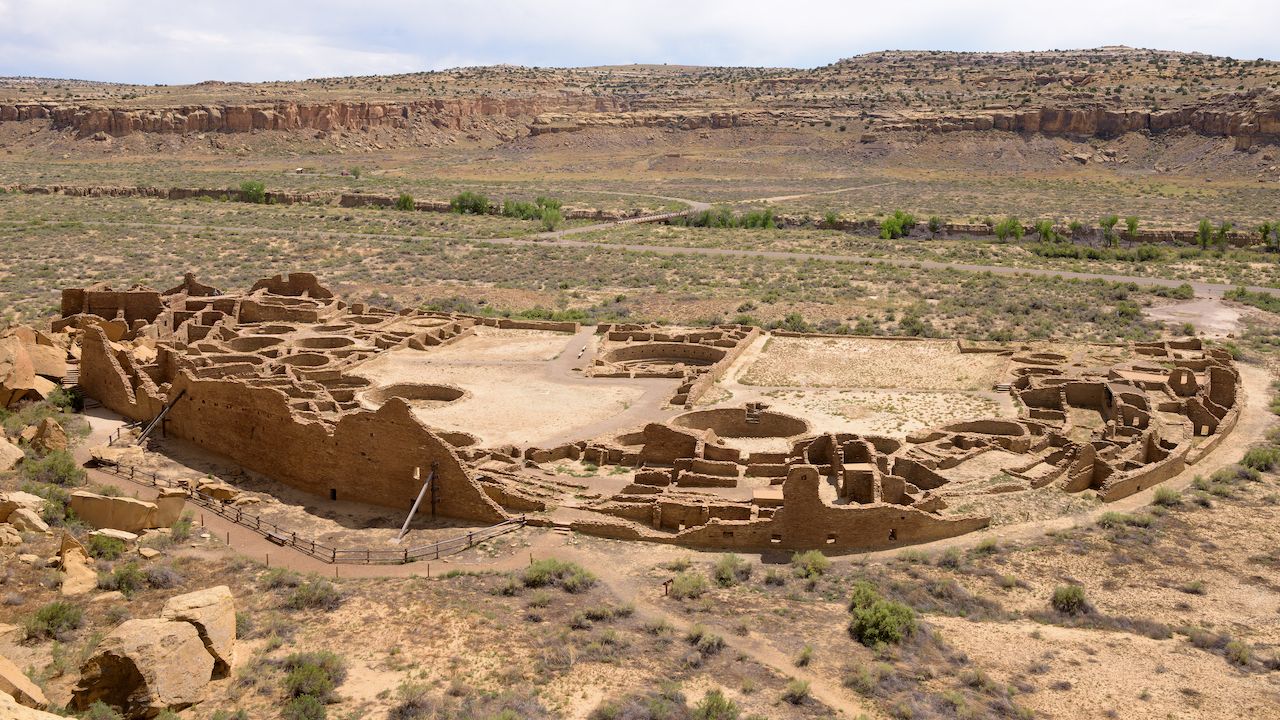 One of the most endangered areas is the Greater Chaco region, which is “under siege by oil and gas development,” in the words of the NRDC. The Chaco Culture National Historical Park is not just a UNESCO World Heritage site and International Dark Sky Park; the area has been home to the Navajo and Pueblo peoples for hundreds of years.

Although in 2019 the House of Representatives passed the Chaco Cultural Heritage Area Protection Act — which bars new oil and gas development within a 10-mile radius of the historical park — the Republican-controlled Senate has not taken up the issue. The bill also provided for a comment period for the Department of the Interior to consult with tribes before seeking contract proposals. However, that comment period occurred online during the pandemic, which has disproportionately affected Native people. Moreover, many of the affected groups have limited broadband access and could not express their concerns.

In the meantime, the BLM has plowed ahead with plans to allow more fracking in the area, and has leased an astonishing 90 percent of the area for oil and gas exploration — and has utterly ignored the Protection Act’s provision to protect lands within ten miles of the historical park. The Pueblo Action Alliance and the Navajo Nation’s Diné Care group are battling to protect the area. 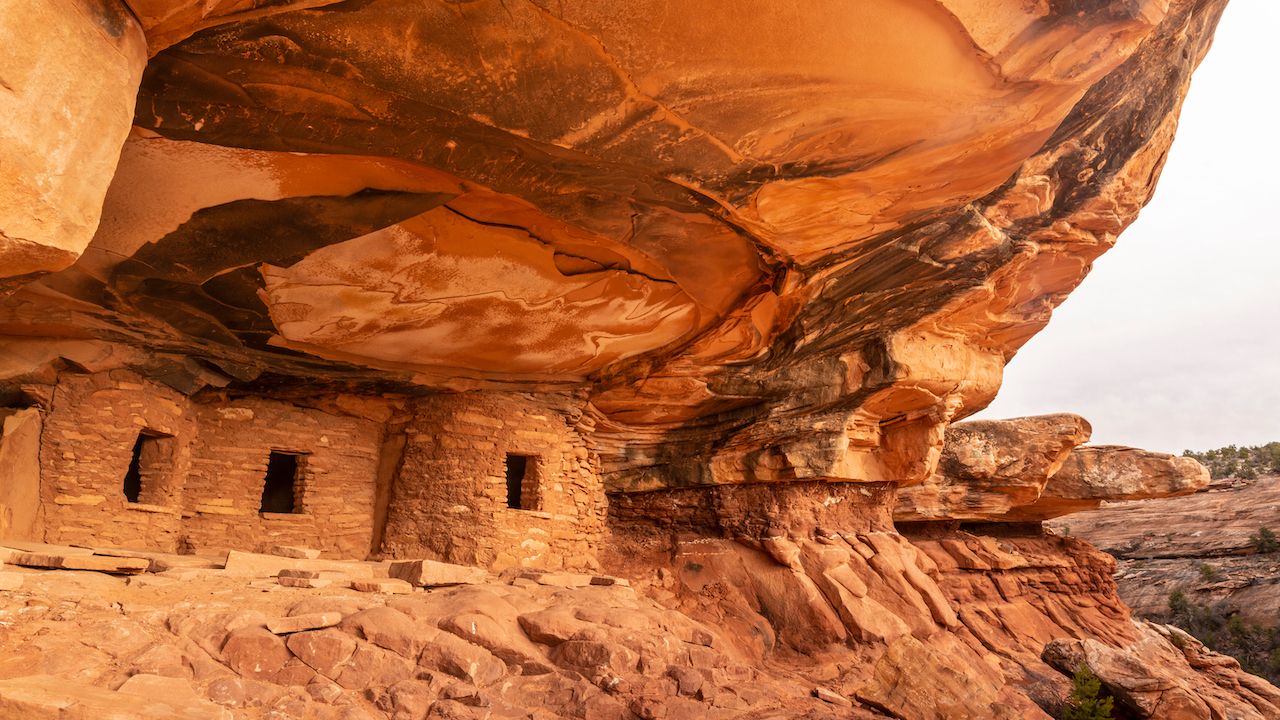 The Trump administration shocked the country when it opened up two million acres of land at Bears Ears and Grand Staircase-Escalante monuments to mining and cattle ranching interests — reducing Bears Ears by about 85 percent and the Grand Staircase by around half. The move was the largest undoing of national monument protections in US history and is being heavily litigated since many legal experts believe that the power to rip up national protections lies only with Congress.

Bears Ears is culturally significant for over two dozen pueblos and tribes of the Southwest. From cliff dwellings to rock art, from sweat lodges to tipi rings, the area is rich with important historical treasures, some of which date back thousands of years. However, that hadn’t stopped the BLM from forging ahead with plans to develop the area, and crisscrossing it with roads without any strategies to protect historically important sites that these roads will make much more accessible. This vulnerability will result in further looting and vandalism, heinous acts which are already taking place.

Now the land is under the Department of the Interior’s purview, the DOI is stacking an environmental review board with vested interests that have no regard for protecting it. It’s a disgusting breach of trust to the Native tribes that successfully petitioned the Obama administration for protection of this area. You can donate to the Utah Dine Bikeyah and the Bears Ears Coalition of Hopi, Navajo Nation, Ute Mountain, Pueblo of Zuni, and Ute sovereign tribes. 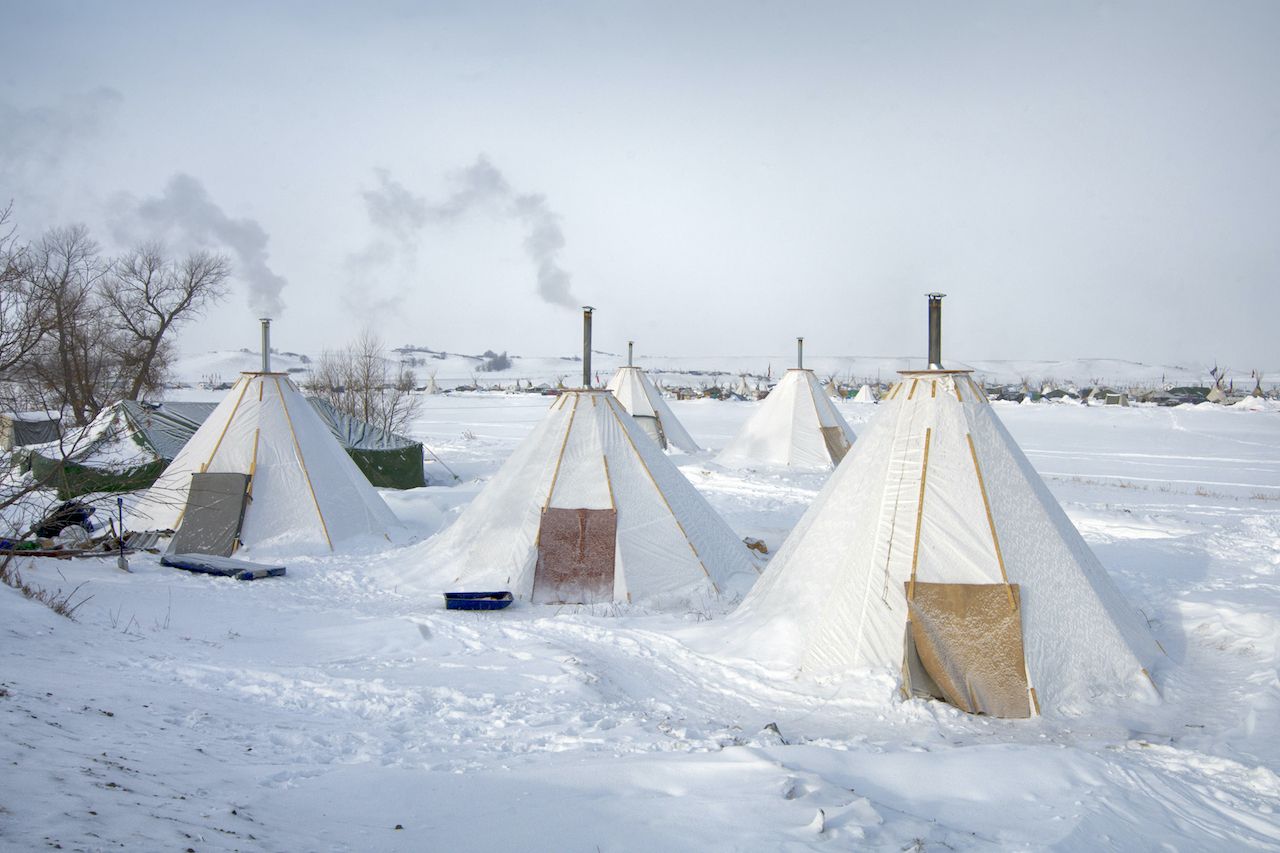 The Standing Rock Sioux, together with other environmentalists and other Indigenous groups, fought the Dakota Access Pipeline for years. Although it was completed in 2017, protests continued and a key environmental permit was revoked. The Army Corps of Engineers is keeping the oil flowing, but the pipeline is being contested in two federal-level cases — and the hope is that it will finally be shuttered and emptied.

Opposition to the pipeline rests on concerns that the project threatens sacred Indigenous land and, moreover, will pollute the local tribe’s water supply from the Missouri River. Many Native tribes see themselves as protectors of the life-giving water supplies from the Missouri and Cannonball rivers, both of which they fear could be affected by the pipeline. The Standing Rock Sioux tribe is still fighting this important battle, and your support — however you can offer it — is welcome. 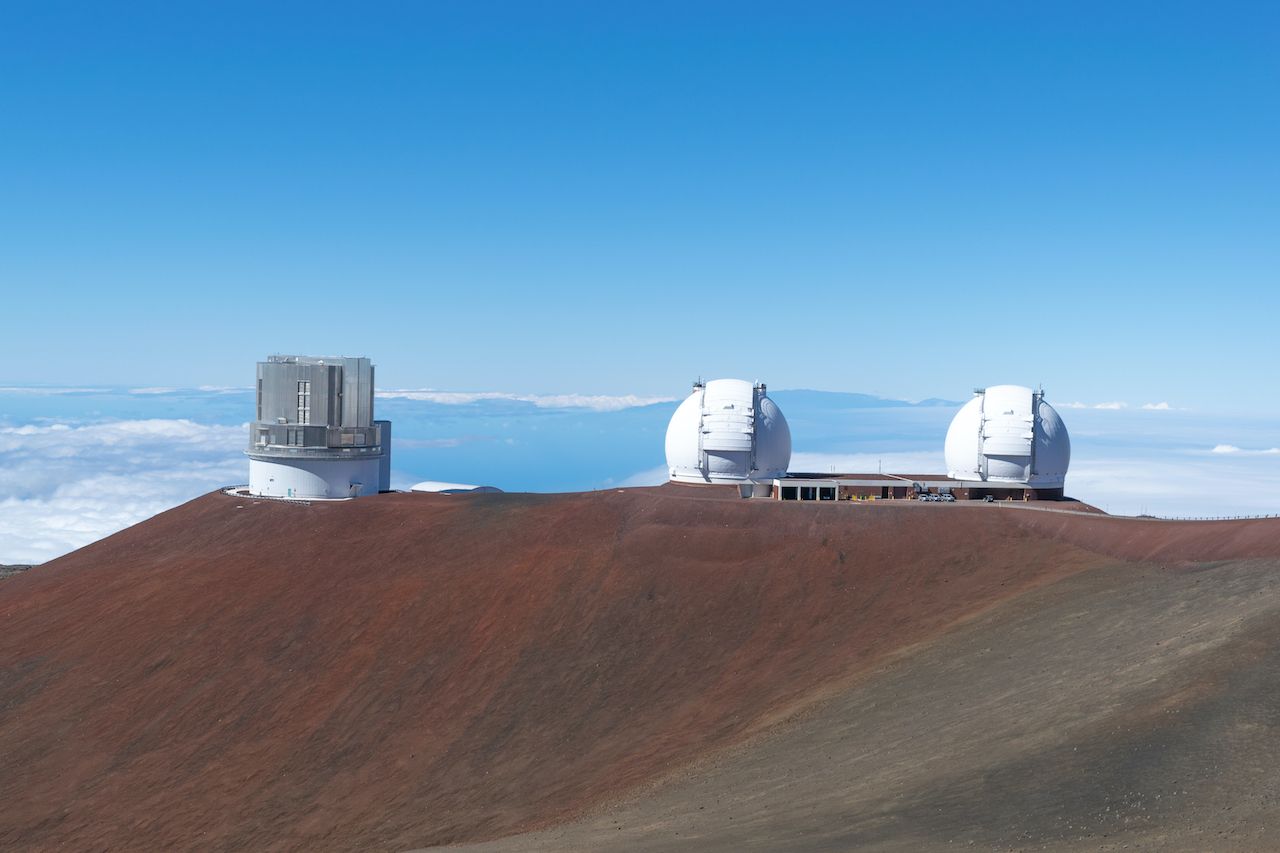 Native Hawaiians have long been protesting the planned creation of the Thirty Meter Telescope (TMT) atop 13,800-foot-tall Mauna Kea on the Big Island of Hawaii. The telescope, which would cost in excess of two billion US dollars to build, would be one of the largest telescopes in the world. Mauna Kea — which benefits from high elevation, distance from other light sources, and frequent clear skies — is already the site of 13 telescopes that are used by various international agencies. However, the Kanaka Maoli, the Indigenous people of Hawaii, say the telescope’s huge footprint would desecrate native land. They have been sleeping on lava fields and blocking access to Mauna Kea and have had success in drawing attention to this issue.

For now, construction on the TMT is on hold — even as entities like the Canadian Astronomical Society reaffirm their commitment to seeing it constructed within the next ten years, a position that has drawn a backlash in Canada and Hawaii. Other locations for the TMT are now being considered, and entities that already operate observatories on Mauna Kea, like the University of Hawaii, are seeking public comment on plans for smaller-scale telescopes. You can check out the Protect Mauna a Wākea Instagram account of the Puʻuhonua o Pu’uhuluhulu group for more information on this fight. 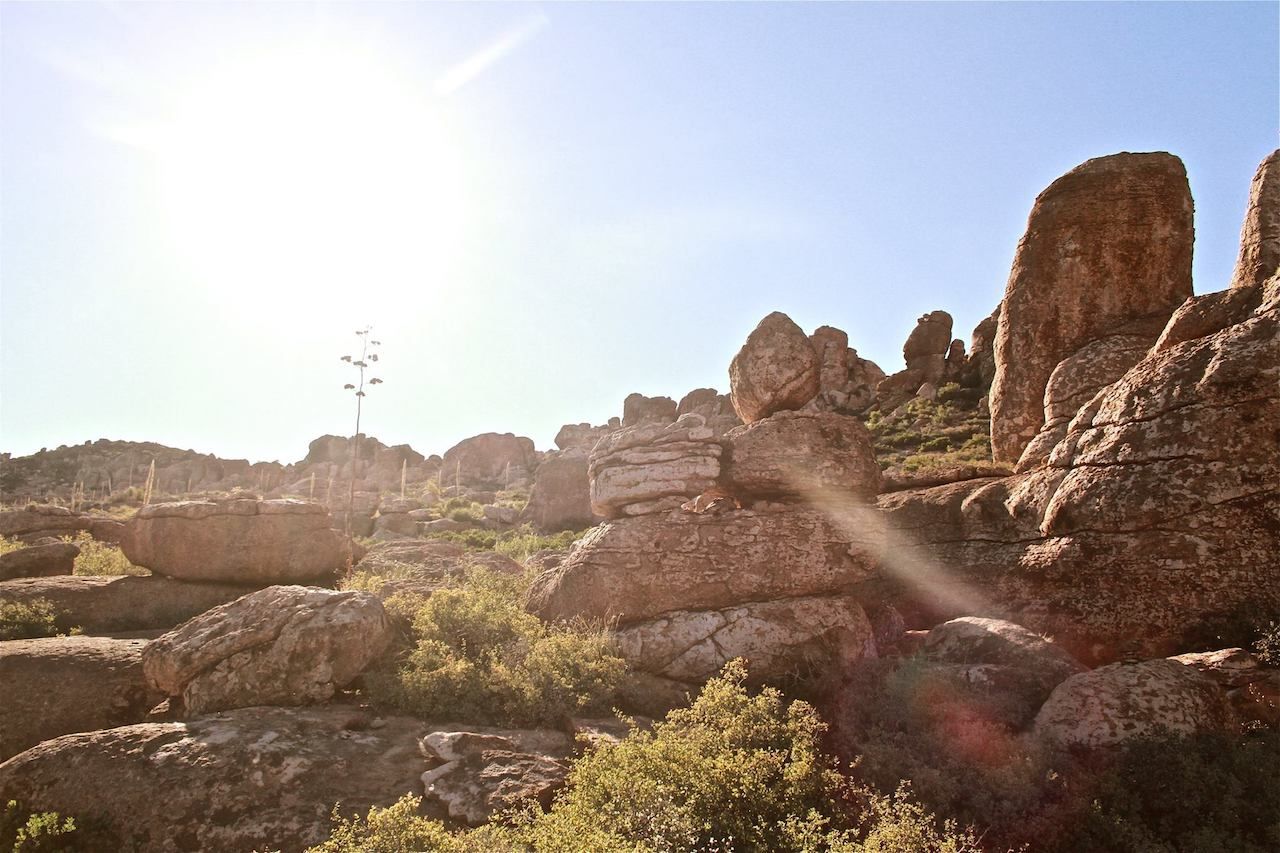 Indigenous tribes in Arizona have long been fighting to protect their lands. Just two years ago wooden crosses and eagle feathers were destroyed in a hate crime at Chi’Chil’Ba’Goteel, as the area of Oak Flat is called in the Apache language. The hate crime was a foreshadowing of a potentially devastating development: the complete destruction of Oak Flat.

In total disregard of the central place of Oak Flat in Apache religion and culture, the National Forest Service granted operating licenses to Resolution Copper, a mining company jointly owned by the British-Australian companies — which plans to create the largest copper mine in the world. The mine would eventually result in a nearly two-mile-wide crater and pollute the area’s waterways for decades to come.

The British-Australian mining company Rio Tinto has a well-documented history of environmental negligence, and of destroying Aboriginal sites in Australia, but plans for Oak Flat are proceeding apace. The mining companies stand to access billions of dollars worth of copper from the area.

Lest we blame the Trump Administration alone, even Republicans senators who never aligned with the Trump agenda have shown their fealty to corporations over people. Five years ago, it was Arizona Senators Jeff Flake and the late Senator John McCain who snuck a rider into an unrelated bill selling off Oak Flat to the mining companies. But you can do your part to support the Apache Stronghold in its efforts to save this area.