“I was born under the sign of the candy cane.”

That’s what Jennifer Jacobson told Bill and Michelle Johnson, owners of the SkyPark at Santa’s Village theme park in Skyforest, California, during her job interview. It wasn’t the premeditated line of a smooth-talking job applicant looking to charm her way to an offer. It was the truth.

The Santa’s Village theme park of Jacobson’s youth was located a short distance away near Santa Cruz. This Santa’s Village first opened on Memorial Day weekend in 1958. It was one of three theme parks created by developer Glenn Holland, and featured reindeer, a baby animal petting zoo, puppet shows, elves in workshops making toys, a life-sized gingerbread house, and, of course, Santa himself.

Jacobson was born in 1979. That same year, Santa’s Village’s glowing candy canes, enchanting strings of Christmas lights, and electric bulbs over Santa’s Workshop fell dark. They would remain so for the next 40 years. It was this very abandonment that would ignite Jacobson’s childhood love and affinity for independent theme parks, which would come to shape the course of her life.

Growing up near this veritable wonderland would stoke any child’s imagination, and Jacobson was no exception. The only difference was that Jacobson’s imagination ran wild not with fantasies of what the park was, but what it had been and could be once again. Independent theme parks like Santa’s Village are uniquely positioned to serve not only as weekend excursions, but as epicenters for the community, where even adults can recapture a piece of their childhood. 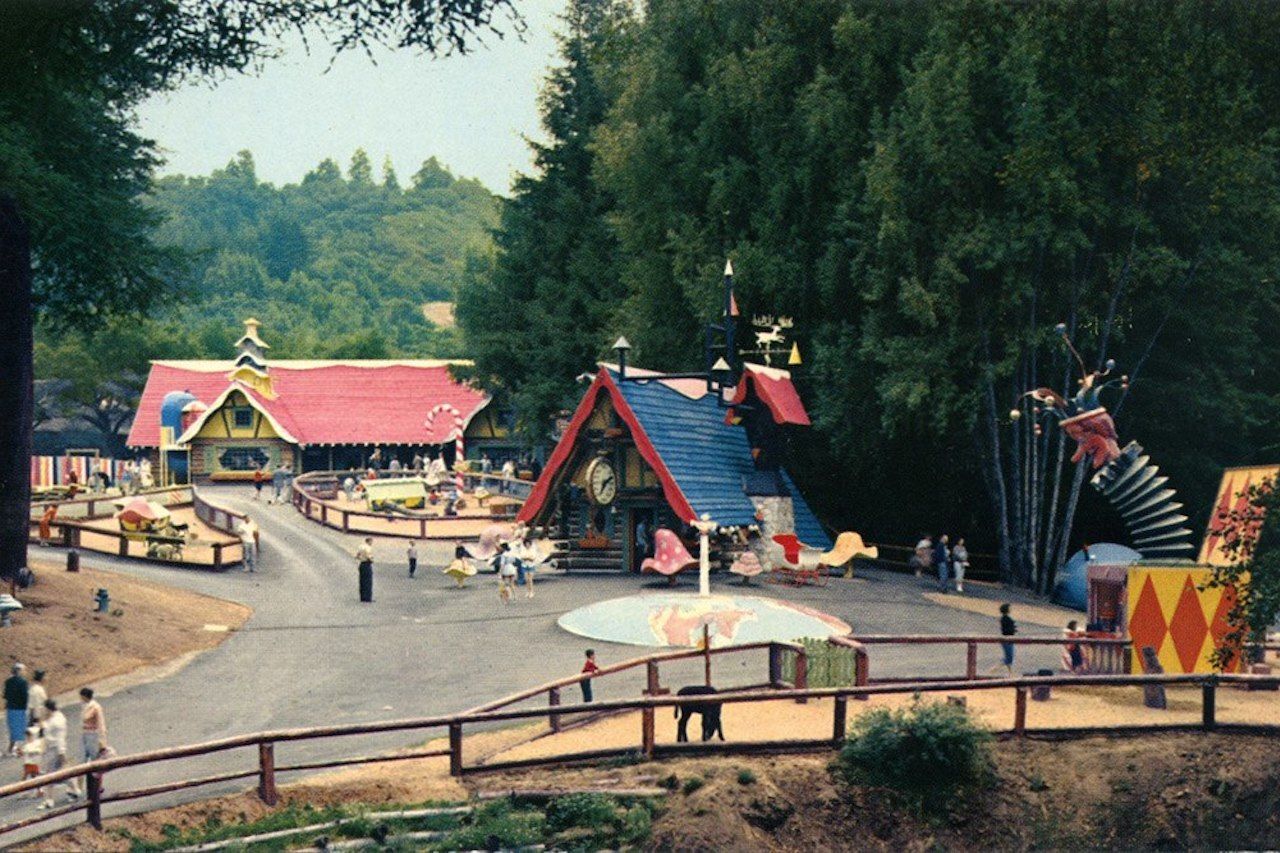 Though she had never seen the park alight and alive, Jacobson was enthralled by the abandoned Santa’s Village. An adult might have looked at the park’s remains and seen a disappointment, an eyesore, or a development opportunity. Through the eyes of a child, it was like a slumbering playmate who hadn’t woken up yet.

Growing up near the park, Jacobson was particularly impacted by the way the lights lit up the welcome house at night. “Here was this place that called to me every time we drove by,” she tells me. “The bright colorful mushrooms in front of a giant log cabin with fake snow year round; the siren call of Santa’s Village spoke to me. Yes, you could see grass peeking up through the pavement. Yes, the yellow walls around the windows were faded. The red stripes on the candy cane were becoming a softer dark pink. But I couldn’t help but imagine what kind of park must be beyond those closed gates.”

Active theme parks thrive on instant gratification, adrenaline, sugar highs, and palpable thrills. But even in its derelict condition, Santa’s Village was defined by its almost mythical past and unknowable future. 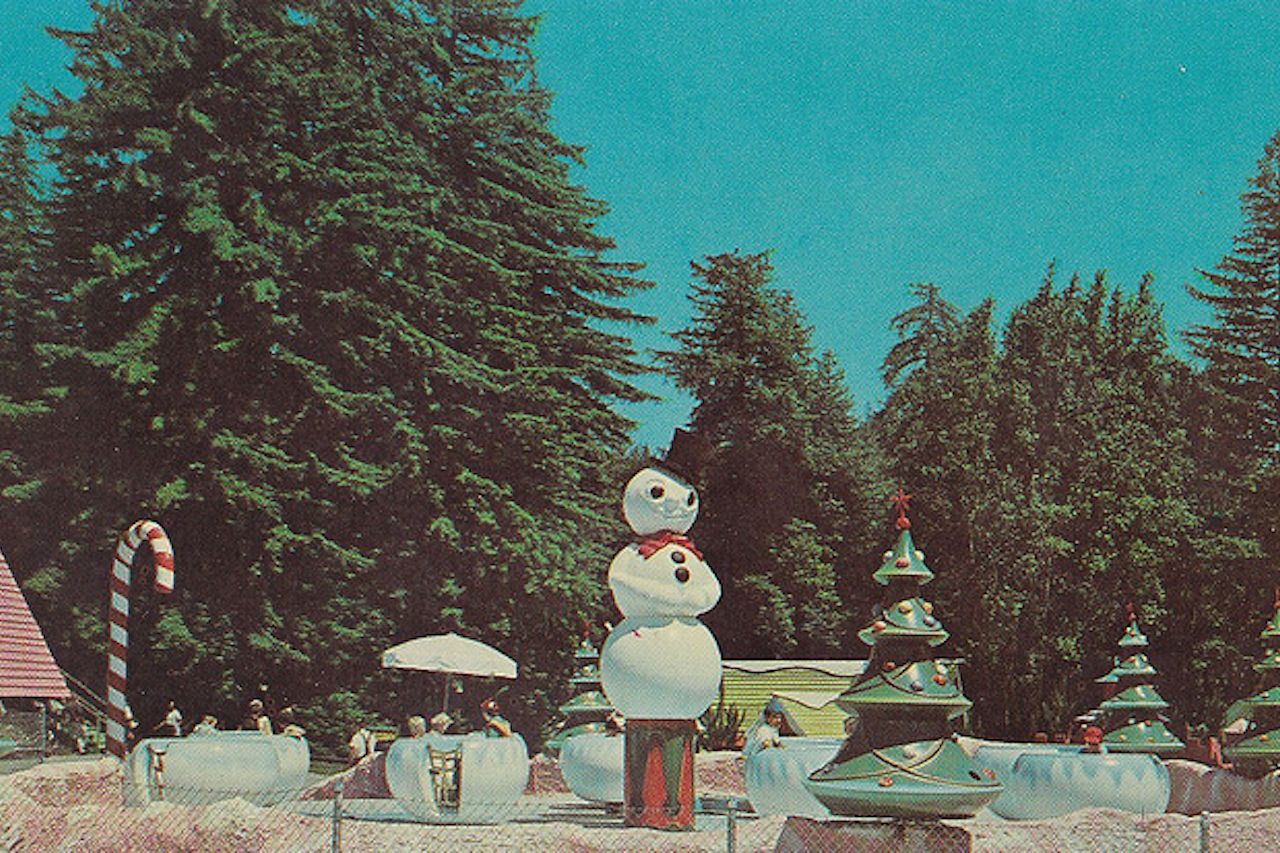 “The people in the community itself shared a fond love of this park,” she says. “For many it had been their first job, or their first time meeting a live reindeer, or simply the best gingerbread cookies they’d ever had. Everyone had a story about it, and many even had a colorful concrete mushroom or park fixtures in their yard.”

Jacobson longed to visit the park as it had once been. Its forbidden, overgrown grounds held a magical allure that even a lively, illuminated theme park likely couldn’t have matched.

“As a kid,” she says, “I gathered my friends together and wrote to the city, asking them to reopen the park. I collected stories and anything I could find from the park. On my 30th birthday I finally walked the abandoned, bulldozed grounds. I still have a piece of one of the original giant concrete mushrooms I found that day. They were four feet tall, and you could climb on them and slide down them. Even in its dilapidated state, the park was still magical.”

Though the community’s children would certainly have disagreed at the time, the park was more special for having been shuttered. Santa’s Village became a diversion for the imagination; a blank canvas for Jacobson and her friends to paint their own childhood fantasies. 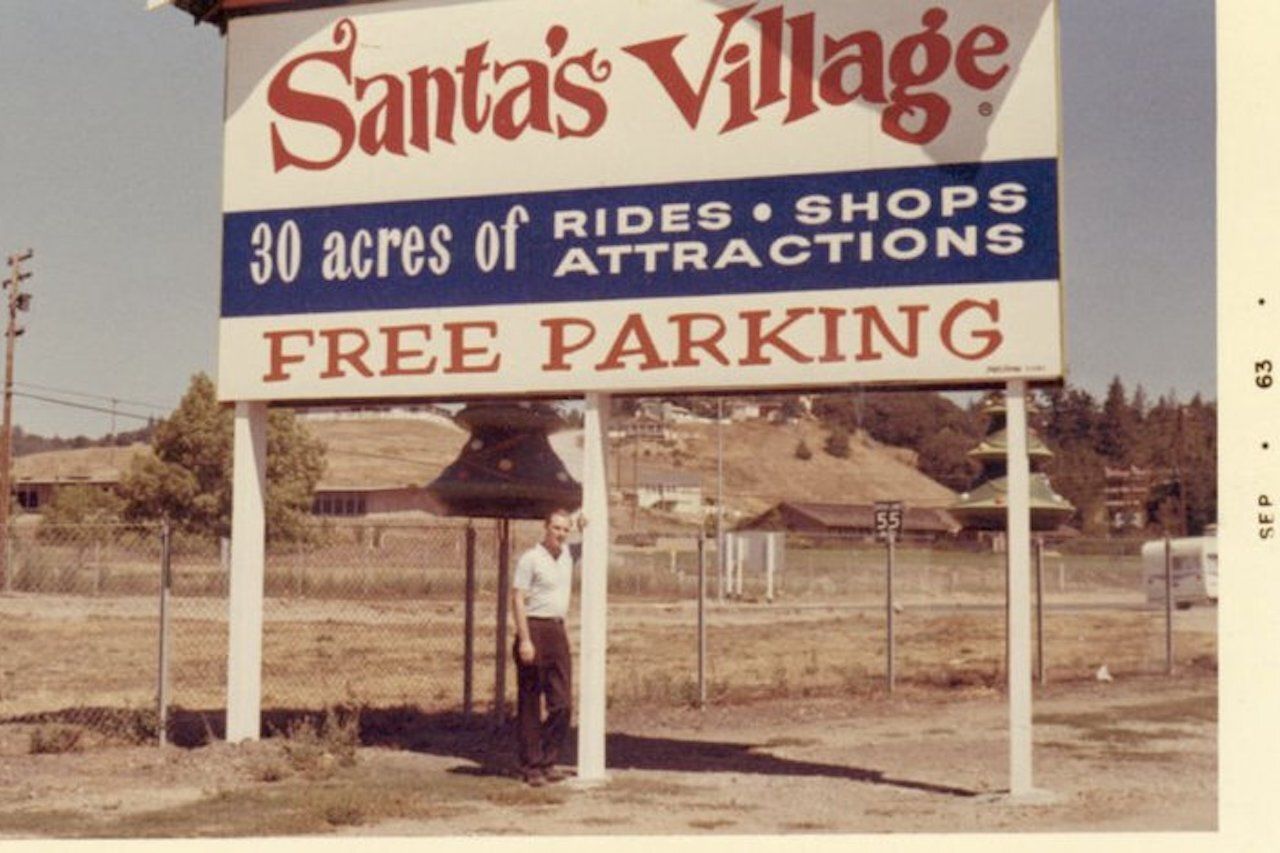 The demise of Santa’s Village in 1979 was the familiar story of neighborhood treasures that fall victim to relentless urban development. In the 1960s, ‘70s, and early ‘80s, Jacobson says, Santa Cruz was a “wild and weird place where a healthy combination of artists, mystics, free spirits from San Francisco, mountain people, and California surfers lived. Santa Cruz was a whimsical place that had not yet seen a Gap store or a Starbucks.”

Santa’s Village went the way of Santa Cruz. It was a casualty of change and industrial progress (some might say devolution) that makes faceless shells of once unique cities and attractions.

The final blow to the park in 1979 was a combination of high gas prices, the growing-up of the baby boomers, and the development of the Bay Area and its proximity to Silicon Valley. Roadside attractions across the country, including Santa’s Village, were fading from relevance, and by the time Jacobson and a new generation of children were growing up, the park was gone.

“As a child, I knew the park should still be open, but I didn’t know how to put it back together,” Jacobson says. 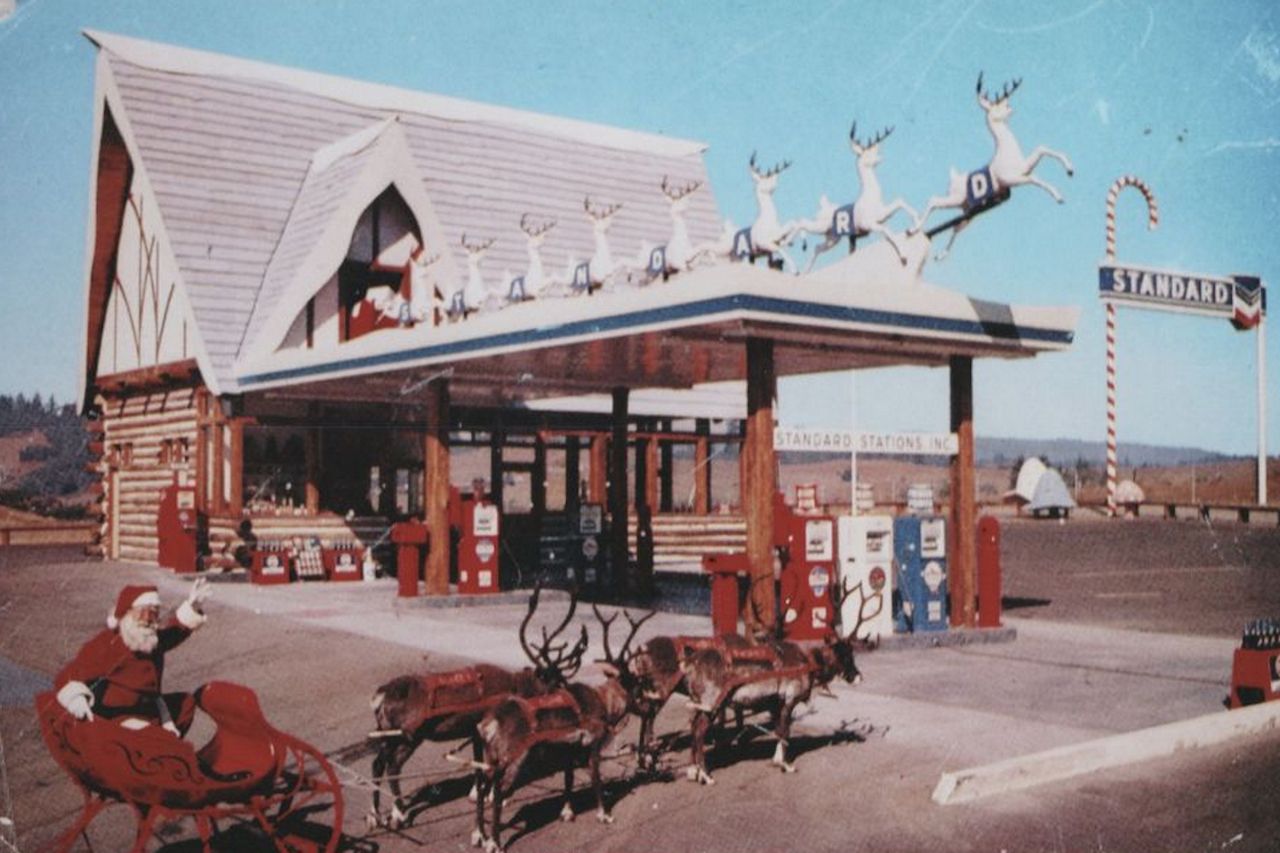 Her wistful longing for the resurrection of Santa’s Village may have sounded naive at the time — especially in the wake of a fire that devastated part of the abandoned park. To Jacobson, it seemed to torch the fabric of childhood itself.

“One night on the way home my parents stopped the car,” she says, “We looked across the freeway in horror as the Welcome House stood surrounded by flames. Even the tiny log cabin Santa-themed gas station next door was in flames. The little white plastic reindeer on its roof were melting as an ominous orange glow illuminated the sky.”

Even to an optimistic Jacobson, this fire represented the early chimes of the death knell — a grim sign that perhaps Santa’s Village was beyond repair. Her beloved park was under assault by forces beyond her control, whether fire or urbanization, and there was no turning back time.

“Part of me has never recovered from that night,” she says.

The revival of a different Santa’s Village 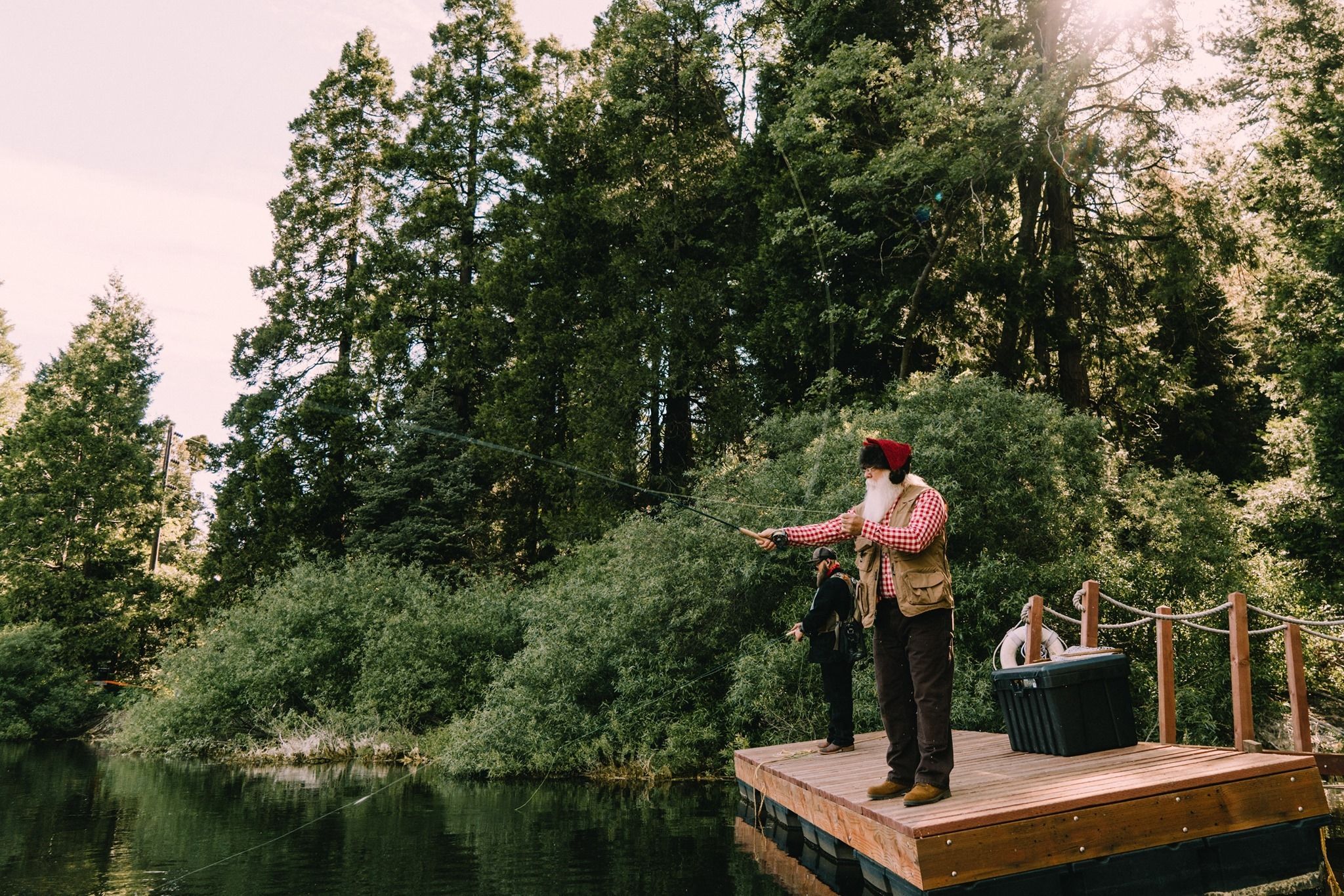 As a child, Jacobson might not have known how to “put the park back together,” as she puts it, but as an adult the answer suddenly shifted into focus. In 2014, she noticed a real estate listing in the San Bernardino mountains for an abandoned park that had closed in 1998. It was located near the other end of California, but was also coincidentally named Santa’s Village like the one Jacobson grew up by. Bill and Michelle Johnson bought the park and spent the next two years restoring it, adding more modern attractions like zip lines and a bike park, and renamed it SkyPark at Santa’s Village.

It wasn’t the original Santa’s Village of Jacobson’s youth, but its wintry aesthetic and thematic similarities immediately drew her in. During that fateful job interview for a PR position at the park, she revealed her long history with the park’s namesake and deep attachment to it. As Jacobson mentioned to the Johnsons, she was born under the sign of the candy cane. It quickly became clear that Jacobson was a natural fit to work at Santa’s Village.

At SkyPark at Santa’s Village, Jacobson found the spiritual successor to the park of her youth. While the original Santa’s Village may have been consumed by fire and progress, to Jacobson, the magic doesn’t lie in a specific location — or in one particular glowing candy cane.

“Independent theme parks are really special places,” she says. “No one opens an independent park to make tons of money, they do it because they care about the community.”

Independent theme parks like Santa’s Village aren’t just for children. They’re gathering places, community centers, and playgrounds for kids and adults. They’re part of the identity of the city itself. Whether or not you were born under the sign of the candy cane, theme parks are spaces where anyone can be a child again.

“I wish I could go back to my childhood self watching the fire tearing apart the Welcome House at my park,” Jacobson says, “and tell that devastated little girl, ‘It’s going to be ok.’”

Theme ParksThe 7 Strangest Theme Parks Around the World
Tagged
Theme Parks
What did you think of this story?
Meh
Good
Awesome