According to alarming new research, humans buy one million plastic water bottles every minute. And less than one-third of those are recycled. Without diving too deep into the environmental concerns surrounding this statistic, it’s apparent that we as travelers need to find a better solution than popping open a plastic bottle whenever we’re thirsty while abroad.

Many travelers, myself included, carry a refillable water bottle. But even the most thermo-cooled and tightly sealed water bottle doesn’t solve the most pressing issue surrounding staying hydrated abroad: what to do when the tap water isn’t safe to drink. And finding potable water in public in some countries can be nearly impossible.

Enter the Sawyer Bottle Water Filtration System, a new travel water bottle that dropped in 2022. At its core, the Sawyer bottle combines a standard water bottle with a backpacking water filter — the type that you’d bring along on a multi-day camping trip to make stream water safe and clean enough to drink. The long and short of it is that the bottle lets you fill up from any source and know the water is clean, filtered, and healthy.

We hope you love the Sawyer Bottle Water Filtration System! Just so you know, Matador may collect a small commission from the links on this page if you decide to buy a bottle. Listed prices are accurate as of the time of publication.

This bottle is basically a standard, BPA-free water bottle with the Sawyer Mini filter inside it. If you’ve filtered water from a stream while camping, you already have a basic understanding of how the filtration system works. The bottle’s inside filter will last for about 10,000 gallons and attaches to the suction straw connected to the lid. The filter’s pores are no larger than .1 micron, which the company claims is small enough to remove 99.99999 percent of bacteria and diseases in water, including salmonella and cholera. It also claims to remove 100 percent of microplastics, so you won’t be drinking any of the microscopic bits of plastics that crowd our oceans.

“The filter can make tap water safe to drink domestically and internationally,” Travis Avery, Sawyer’s Marketing Director, told me via email. “It is a very simple scoop-and-drink system that filters out all of the harmful pathogens and microplastics from the water as you draw through the straw.”

Since the filter is attached to the straw, the actual filtration happens when you suck through the attached straw, rather than having it filtered as soon as it enters the bottle. It’s great for functionality, but removing the lid can be awkward and you’ll have a strain of gadgets attached to it when you’re filling up. I felt the gaze of those behind me in line when I stopped to fill up at airport bottle fill stations.

Also included in the packages is a cleaning plunger to backwash the filter, which keeps it as fresh and functional as possible. It’s usable both as a travel bottle when touring internationally or in the backcountry as a means to filter stream and river water. 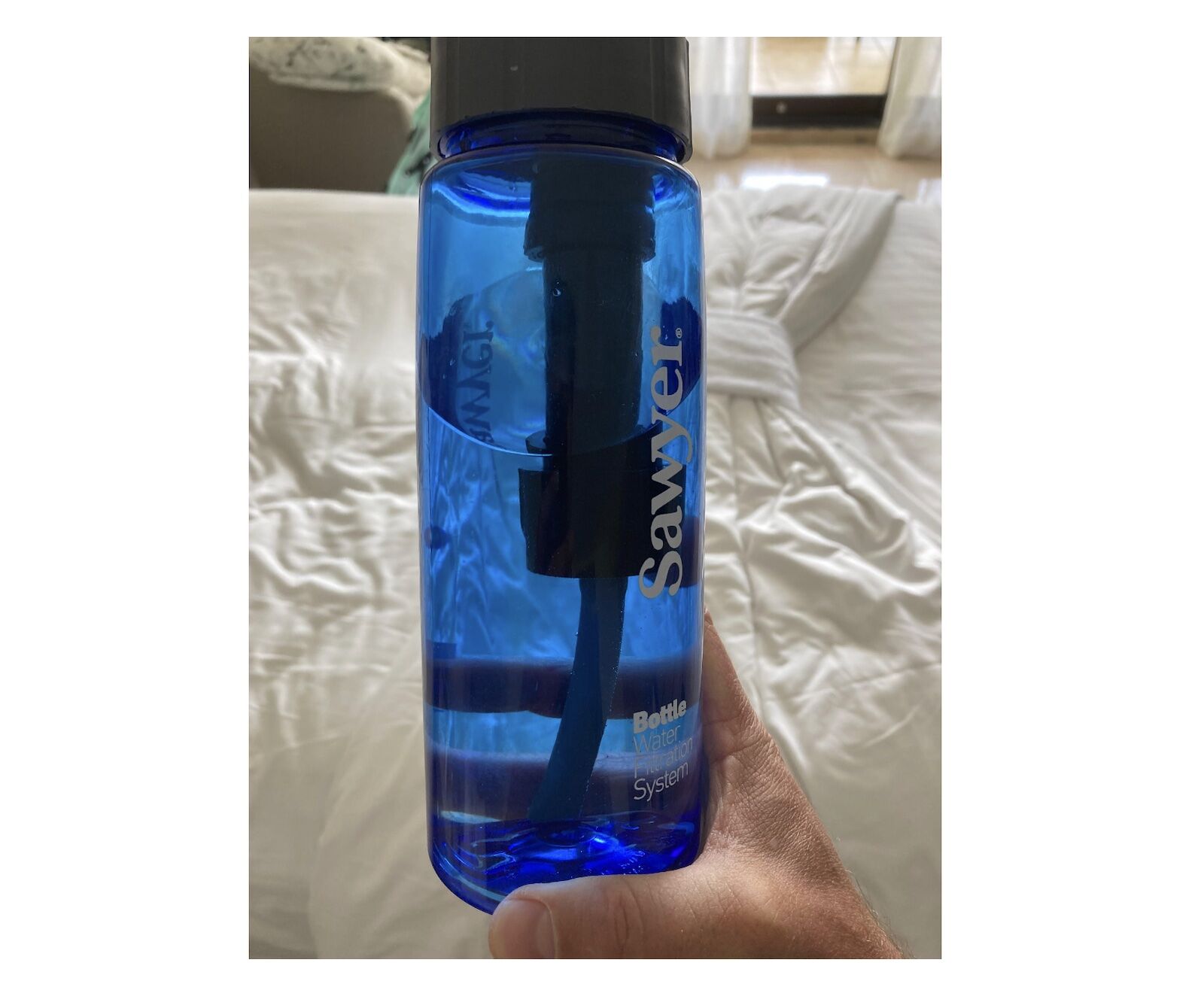 The first place I took my Sawyer Bottle Water Filtration System bottle was Puerto Vallarta, Mexico. Tap water in Mexico is not drinkable in most places, and I admit I was nervous to fill the bottle in my hotel room and trust it to catch whatever might be lurking in the water. But I eased myself into it, filling half the bottle with tap water and half the bottle with bottled water for the first few days, thinking that if I at least cut down on the plastic bottles I was using, it was better than doing nothing.

Three days in I felt great, both physically and with a mental state buoyed by my seeming ability to take a calculated health risk in stride.

Still healthy, I upped the ante to a full bottle of tap water. I drank it, though I spaced it out over the course of several hours. I won’t claim that it tasted great, but I felt fine, and I decided to blame the slight indigestion I felt that night on the ceviche I had for dinner.

The next day, I drank two full bottles. I survived, thrived, and avoided dehydration and plastic waste throughout an afternoon of walking through town and an evening hanging by the pool at the hotel. I continued this practice for the remainder of my trip. Arriving home in Colorado after a week of filtering tap water through the Sawyer bottle, I appeared to be no worse for the wear.

A few weeks later I brought the bottle to Chicago. This test proved much easier to swallow from the moment I landed, and the Sawyer bottle passed with flying colors. I then spent a week in Israel with it, which sounds daring, but the tap water there is drinkable and I found myself at times wishing that I had a larger bottle without a filter that held enough water for a full day of touring. Still, I was glad I had the safety net of the filter.

Filling up quickly is essential when moving through airports or going about a busy day on the road. The biggest issue with this Sawyer bottle mostly related to filling up, as the  screw-on lid needs to perfectly align with the threads so it doesn’t leak while drinking. I encountered this several times when I was in a hurry and hadn’t stopped to check if it was secure. The lid screws on even if it’s not perfect, so it can be confusing at first, but it just takes a bit of practice.

I also noticed that air pressure caused tiny drops of water to escape from the flow hole on the lid during takeoff on planes. A few times, I felt drops of water on my leg as the plane lifted off the ground, and then looked down and saw tiny bubbles coming from the lid of my water bottle. I never figured out exactly what caused this to happen, but with some experimenting, I did learn that it can be solved by gently loosening the lid before takeoff, relieving the air pressure on the water inside the bottle.

After three weeks of travel with the Sawyer Bottle Water Filtration System, I was quite satisfied with its performance. I had no issues with sickness and the bottle packs easily into the side cup holder on most travel backpacks. The bottle is not the most convenient to open and refill, and I hope that any future update to its design addresses the issue with the cap. It’s also worth remembering that you’ll need to refill the bottle once or twice over the course of a full day of activities, as it only holds 24 ounces of water (Sawyer does sell a 34 oz water bottle, as well).

That, though, is the beauty of the Sawyer Bottle Water Filtration System – it eliminates the worry of having to stop and buy water halfway through the day, or carry around a backpack full of plastic bottles. For international travel to places with questionable water quality, the peace of mind (and fresh-filtered water) the Sawyer bottle provides is a welcome step forward for sustainability and convenience.

Buy just the Sawyer Mini filter for your own bottle